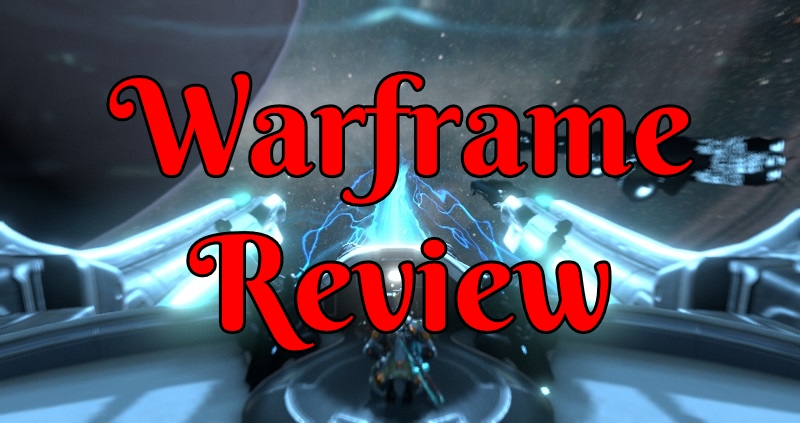 Warframe is a f2p action game in a sci-fi setting that has elements of parkour, shooter, and solo or team-based gameplay. The players themselves work on crafting new weapons and Warframe suits as they adventure deeper and deeper into the planetary solar system. The game also puts out free DLCs as well as keeping the game fresh and competitive in this market space.

Players will find most of the time spent either running a mission or just chilling in the spaceship. Sometimes I found myself running around the different crafting and other stations on the ship. Other times waiting for groups to form or a mission type I wanted to pop up. 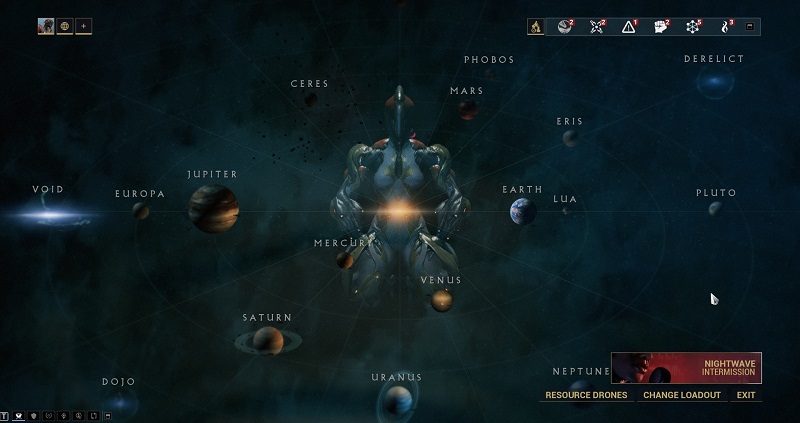 One of the things I really love about this game is you get clear and defined goals to work towards as you play. Each plant itself has a bunch of different locations to carry out an array of missions. You also get the different path you can take but are not limited to going down one path or another. Each planet has its own special resource, requirements, and even mods you can farm so you tend to want to unlock the whole thing eventually.

Each plant itself also has a number of paths you can unlock and go down. Many times there are a couple of different paths you can take on the planet. Some of the paths will lead to dead ends, boss fights, and certain resource you can’t get elsewhere. I always found it fun having a reason to work towards unlocking a boss or farming location on a particular planet. It certainly adds to what otherwise might be seen as total chaos on were even to go. 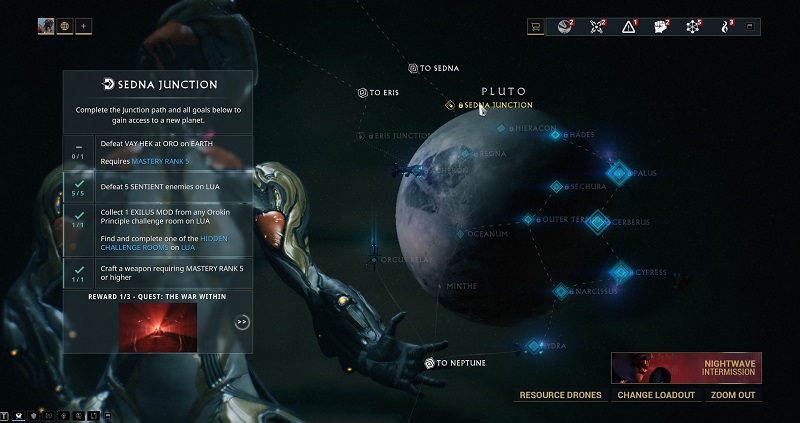 Plants have certain requirements that need to be met before you can unlock the junction between them and jump to it. I never felt like these objectives were ever very hard as long as you wanted to play at a party. Perhaps annoying at times if you find out you do not like a particular mission or you were supposed to be scanning something along the way and did not check out ahead of time the requirements.

While you start off the game on Earth with a feeling similar at first to our own solar system that quickly changes with how alien everything feels the deeper you go. It’s cool the game developer can just add another planet to the map if they wish to expand the game. It also means they can expand the game anywhere from early, mid, or end game as well. I’ve had fun in newer content without having to complete all the former planets. Sometimes they just add new mission hub areas to existing planets as well. This making the game quite an interesting one with a lot of expansion options for all kinds of different players. 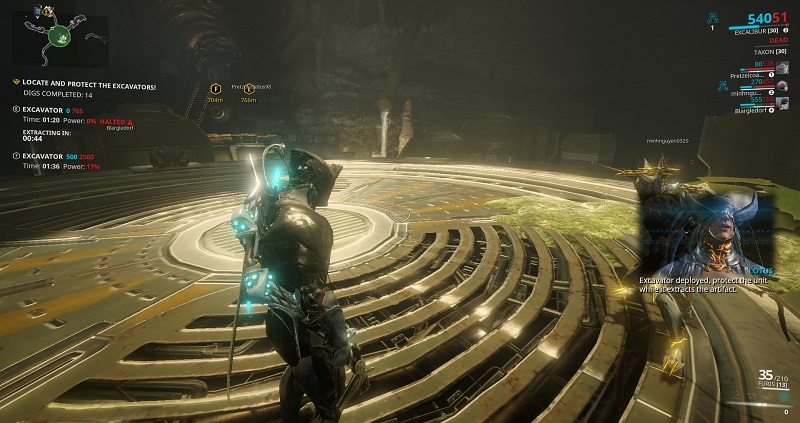 There are certain missions that fall into a flavor of the month of what the player base wants to do in general. For those, it was quick and easy to find amazing groups and not wait around to run them. Sometimes I found it could take twenty minutes or longer to get a group just to run that one mission no one likes. So finding some friends in this game is important but being solo and joining a public group is not the end of the world either.

While you can turn off group play in mission menu and play solo. The deeper you go into the solar system the harder things become. Sometimes you also find that rock star of players who are quick, well geared, and they are looking to bust out a lot of missions. Other times you just luck out and a higher level player is running a friend or they are just randomly helping people out who might be waiting in queue for other players to join. 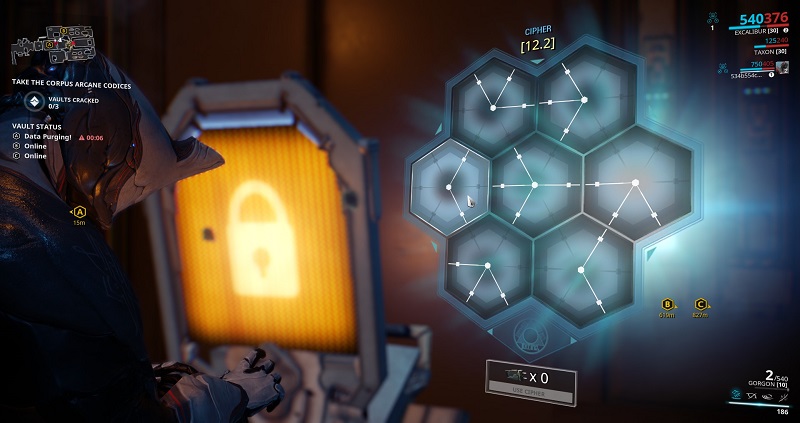 There are quite a few different missions and each spot will always have the same type. After you learn them all they can get repetitive if running them in different settings is not enough or you need to farm something in a particular location. You could have something as easy as kill X amount of creatures. Maybe you have a target that you need to stop. Then you might have the more challenging ones like unlocking of data vaults that require some parkour and evading detection ability. Where some players are flat-footed and trigger the alarms failing the mission--- doh

Not all missions where those get in and out quick. Player love to grind out the defender or other similar types of missions where you are trying to last as long as possible. The longer you last the better and more rewarding it becomes. It also becomes harder and if you fail you get nothing. Adding to the challenge after each round player on an individual standpoint can decide to stay or leave. Thankfully you do get a little bit of time to see what others are thinking. Often times once a key player wants to leave the rest of the group follows. Anyone staying behind will surely fail and get nothing. This way of going about it is nice when a group is just not clicking together or you are having an amazing time and want to move onto more challenging rounds. 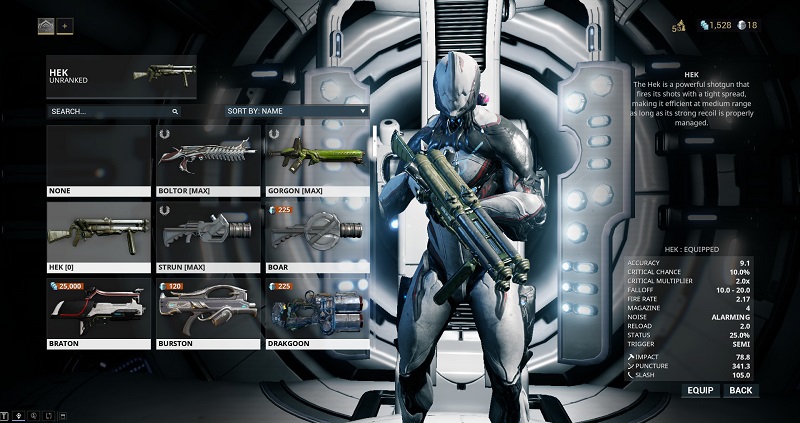 When it comes to crafting and items in this game it has a rather interesting design element that creates a desire to keep crafting and trying out new weapons. While there is also still a reason to max out and create end game items it’s nice to see there is a purpose for everything else. There quite a number of different mods and making your items different from another player depending on what you focus on.

While there is the whole solar system of progressing side of things I always found myself wanting more and more weapons for leveling them up. The game has a Mastery system where you go into trials after acquiring enough experience points from leveling up weapons and Warframes. They, in turn, unlock more perks from higher faction daily caps, planetary progressing, storyline quests, trading, and a whole lot of other stuff.

The kicker here is once an item hits max level you are no longer getting more mastery experience from it. As such players are on the constant hunt for resources from different planets, blueprints, and that feeling of wanting to collect them all.

Since it is a f2p game and they want to sell bag space that can be a struggle I myself was often faced with. While some stuff I wanted to keep I just dint have space for. I oftentimes crafted and maxed out to the best of my sword, guns, and Warfare that I enjoyed using for when I would do the more challenging stuff. I then would switch over to a new and lower-level item for grinding experience on easier stuff.

It can also create bit of a challenge for the player as you might not be using your best in slot item you have during a mission. You have to choose what you want to bring beforehand so if you are bringing out a new level 1 gun with zero mods in it that does very little damage. Resulting in the rest of the party you are in need to pick up the slack. This also increases your chance of failing a mission or overall just not performing very well in a group. Some classes like support can get away grinding up new items while others like a damage heavy role might not always be the best Warframe to bring in. 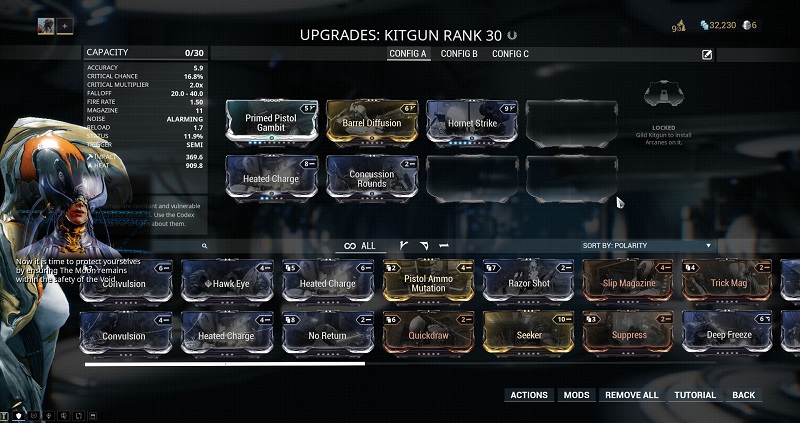 As items level up so too do the capability it can have. That is what gives items some great customizability. You might be focused on dealing certain type of damage depending on the kind of monsters you intend to encounter on missions like slash or impact. Maybe with your playstyle, you prefer having a large ammo clip or quicker reload. There are just so many mods you can spend a while thinking about what is best for you. Some are purely for damage while others might add more synergy to the Warframe you are playing.

You also have Warframe themselves and that is where choosing a class comes into play in this game. You are not just limited to playing what you selected for y your character at the start. As you craft or buy from the shop different Warframe they each come with their own abilities and play style. Some might be really good at face tanking while others cause a massive area of effect damage. Some might be a support role and others a bit of everything. Often times when I got bored playing one I just switch out to another. It also leads to craft new ones if I could gather the parts for the mastery experience as well.

Crafting also does take some planning out. Not only are you going to a different planet to farm materials you need. There is also a real-time element to crafting unless you want to pay with real money to speed things up. Quite a few items can be 12 hours, 24 hours or days. I found as long as I was thinking ahead and prepared as one item hit mastery I’d have another to replace it. I never felt a need to spend real money to speed things up. 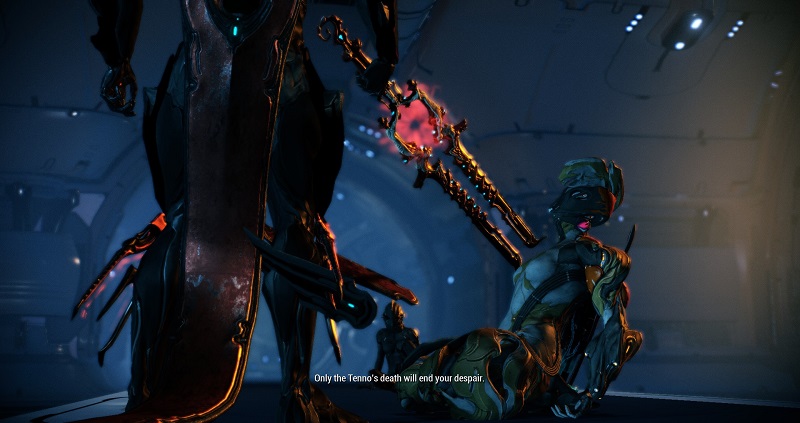 I really enjoyed the adventure and fun I had in this game to point I felt like I could not get down in words how amazing it is. I have over 150 hours and I’ve played it on and off quite a few times. Many months ago I wanted to write up my review and even put out some other content for the game before moving onto the next one. The words would not flow and so I’ve been at an impasse in trying to get something out. Often times you can’t always showcase a game in a way for how amazing it made you feel.

There is just something about this game I could not put down in words. It was always nice if I had a few minutes and wanted to play alone I could just jump into a mission solo. Other times If I had more time I might join the different events that were going on or partake in missions that would last over 30 minutes of time.

Beyond that there just other random stuff to do in this game. From fishing, mining and even just goofing off on a hoverboard in the more open zoned content areas. The deeper and deeper you get into this game the more stuff that unlocks. While sure you could spend a lot of time grinding bosses for that blueprint drop you needed for a Warfare that was not often what I spent my time on.

As a free to play the game goes I recommend it. I never spent any money on this game and enjoyed it for so many hours. It is also nice not having to buy DLCs to enjoy the newest content. Sure they have quite a few bundles to buy under the store for Prime Warframes and other items that go along with the new stuff. The game was still enjoyable without it.

Screenshots are taken from taken and content was written by @Enjar about the game Warframe. If you are thinking about playing this game and are looking to support me further consider using my Epic Games creator code: enjargames at checkout or using this referral link to be sent to the store's pages.