Neon District is a cyberpunk rpg on the ETH Matic blockchain. Not too long ago they release a version of the game with some playable elements. For the time being, players can check out different characters in the game and level them up. Open loot creates and levels up the gear. Along with sending your team of characters out on missions or partake in pvp.

You might remember a while back signing up for this game where you got a free character for doing so. As luck would have it they now give you enough of the game's currency called Neon to purchase another three characters for 100 Neon each. This allows you to have a single full team to send them out on Neon Pizza deliver missions.

The biggest thing to note here is many of the character's abilities and other aspects are not all working or even being used in combat. I picked a more classic RPG style team of character to take out on pizza runs. That however is not the current meta since those that are more heavy skill-based are not being fully utilized at this moment.

The game itself has 6 different characters. You don’t need to worry too much about picking the wrong class as you earn more than enough free neon from running pizza missions you purchase others if you change your mind later.

They have some of your standard rpg classes. This would include a Heavy that is used as a tank in many people's teams. Along with A Doc that is the primary healer in the game. You might even consider something like a Demon which is a combat character to all fall in this category as well.

Then you have more of a cyberpunk lineup of classes to select from as well. You have your classic Jack that is the hacker in this cyberpunk world. There is also a Genius who is a mad scientist which I’m not quite certain what that even is. Finally, you have a ghost that is focused on damage and assassinating.

You can send your characters out on pizza delivery runs where they earn you Neon from successful deliveries. Each delivery season lasts around eight hours in total. This can include eight separate delivery jobs.

For the moment they only have two different tiers of pizza delivery runs. Tier one pays the least and you only get so many runs before you are forced into taking tier 2 only missions. The great thing about tier 1 is you are safe from being ambushed and losing your unbanked Neon.

I rather like they allow you some non-pvp time to build up some Neon and upgrade your gear, classes, and anything else this game might feature in it one day. This also allows you only need to check in on the game once every eight hours or longer if you are doing tier 1.

At tier 2 you could earn up to triple the amount of Neon. The issue is you can get ambushed. Once you get ambushed for that induvial pizza delivery you are safe. However, during that eight-hour run, any other individual delivery you have not been attacked at yet on you are still at risk.

The ambushers which are other players get quite a lot of your rewards if they are successful. They do have to pay a small fee to be able to attack another player. In return, they get 50% of the rewards to form the unfished individual delivery job and 50% of any unbanked Neon as well.

They have also included a bounty system where those who have been attacked can seek retribution. This allows the player to put a hit out for the player where the attacker can get some of the unbanked Neon if they are successful.

When I was running tier 2 pizza missions or trying to gank those that were I lost all but one of them. The combat is automated with many classes being at a disadvantage for the time being since they don’t use their skills in pvp for now.

Higher geared and level up players have quite the farming operation going on. Earning them large amounts of Neon by ambushing those running tier 2 missions if they can fence them before getting attacked themselves. This allows them to get even further ahead in the game over those who are much weaker.

Outside of earning Neon. You can also buy some with ETH. For this kind of game, I feel they are quite generous with how much Neon the player can earn if they are not getting ganked. An eight-hour run on tier 1 can net me between the high 60’s to lower 80’s of Neon. Loot creates which contains four pieces of gear costs around 500 Neon to purchase. Allowing an active mission runner to earn one every couple of days.

In addition to spending Neon to purchase loot creates and further characters as I have mentioned earlier. You can buy juice which is used to level up your characters and parts that are used for leveling up armor and weapons.

As far as I’m aware you are not able to earn Juice or parts from running Neon Pizza delivery missions at this time. With the way those pizza delivery missions are worded along with seeing there are several placement holders for juice and parts. I would expect some kind of missions or ways to earn them once the game is more developed. 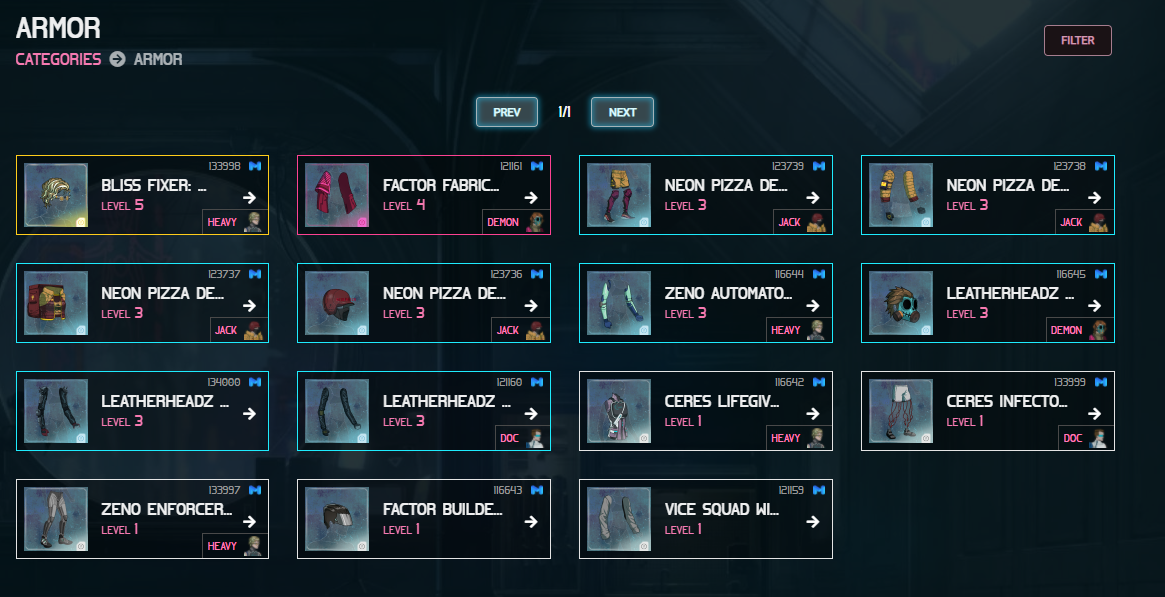 Armor in this game has quite the cyberpunk vibe going on with it. They come in different rarities and can be level up to increase their stats. You have classic rpg stats like health, attack, and defense. Along with more cyberpunk ones such as stealth, hacking, and Nano.

While there is not that much to do yet. Many players are busy farming as much as they can while the game has only been out for a short while. Over time as more players flood into this game and more features are added this could be quite the play to earn type of blockchain game. The biggest downside is the ETh part of the game. Perhaps the sidechain Matic won’t be that bad.

Screenshots were taken and content was written by @Enjar. Screenshots are from Neon District (referral link).