Kolobok Adventures is a game on the Wax blockchain where you breed and send out on adventures pixel creatures called Kolobok. This game has recently received some changes that will have huge implications on its overall ecosystem and I felt it was time to talk about the game in general.

This game is rather straightforward. For those who just enjoy doing something on a blockchain a couple of times a day this game might be for you. It does have a lot of waiting around for timers for things like breeding and adventure runs to end.

While the upfront cost of this game is not a lot. There is a bit of a hidden long-term cost of playing it heavily daily with how the Wax blockchain works that I’ll get into further detail below. You do need to buy at least two Kolobok from the market to get started.

When it comes to breeding this game is rather simple. There are only two stats you need to consider when determining which Kolobok you should breed together. There can also be an additional cost if you want to increase your chance of success.

The biggest change to breeding as of recent has been a success rate being added to breeding. Before that all breeding attempts were successful. Now you only have a 40% chance of success. While one would assume buying breeding enhancers would increase that rate the number does not change on the breeding page. I’m just not looking to spend any more on this game to find out.

If you have a successful birth there is a period where the young Kolobok needs time to mature before it can be used. This is usually around a day or so. The parents also have a resting time before they can be used for anything else. 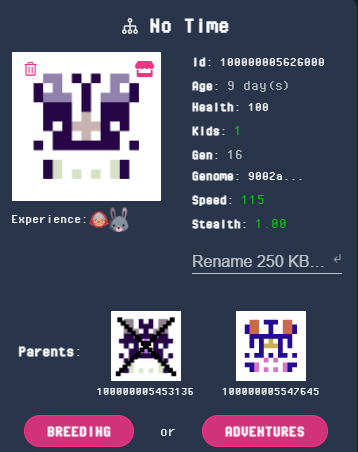 The two primary stats in Kolobok Adventures are Speed and Stealth. Your goal of breeding should be attempting to get a 1.0 in stealth and as high as possible speed. While it seems stealth caps out at 1 at least from the over 50 breeding I have done. Speed is something I’m still having gains on from selective breeding by best.

Speed itself determines things like how quickly you can run an adventure. A slower Kolobok ends up taking around a day to finish one adventure. A much faster Kolobok with 179 speed on the other hand can do the same adventure in 10 and a half hours.

Stealth on the other hand reduces the risk of the Kolobok getting killed while out on the Adventure. On the hardest adventure where you see the most reduction in risk a lower stealth skill has a 77% risk of death. While a Kolobok with 1.0 stealth only has a 56% chance of death.

Beyond that, there is a bunch of other information provided regarding a Kolobok that seems to lack much importance for the time being. Such details include kids, generation, genome, age, and its name. I can only suspect once this game is developed more some of these things will have more importance. 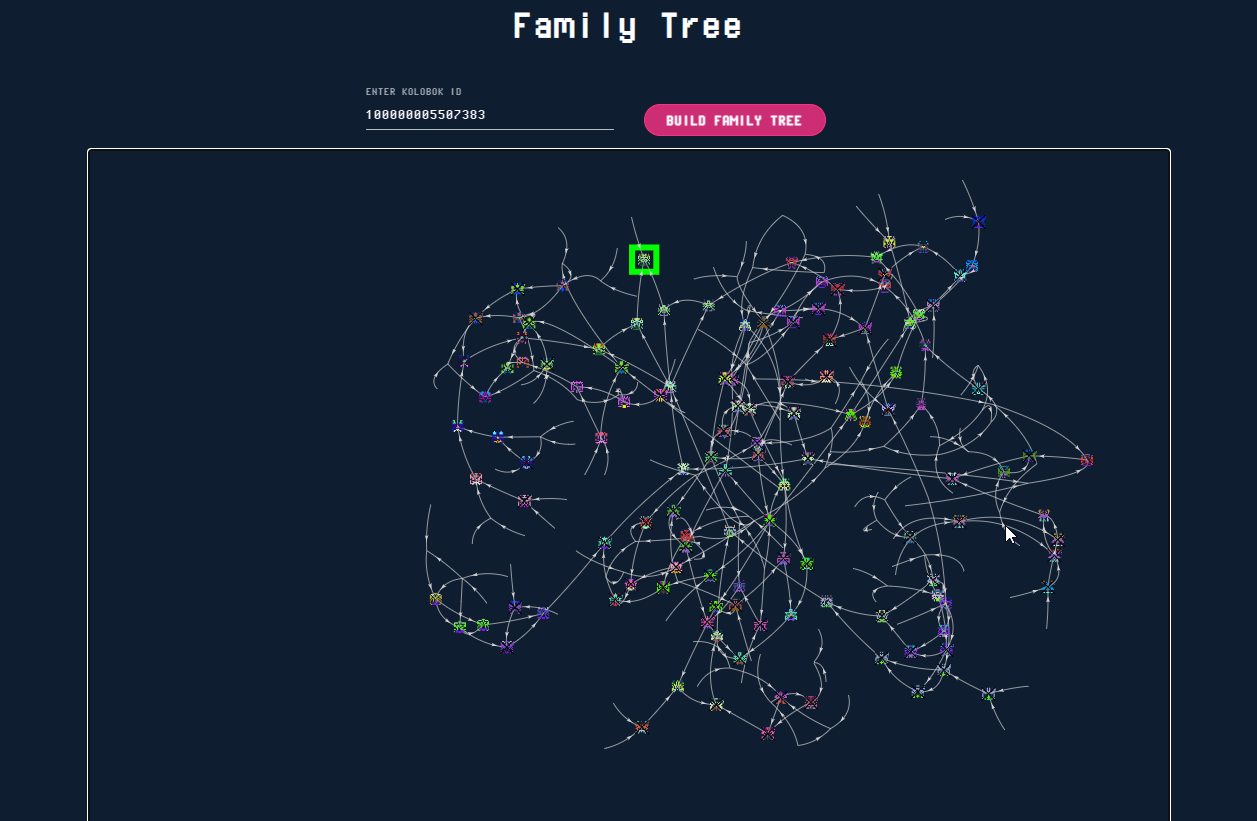 One of the coolest things about the entire process is being able to see the Kolobok family tree. I’m not talking about seeing a couple of grandparents or offspring. The game in some crazy insanity will attempt to display the entire family tree for that Kolobok. After a while, you just stop attempting to load the whole thing with there being over 16 generations of Kolobok in the game now.

The hardest part of this entire process is no joke. Naming the things. I have found after giving over 50 of them a name I just don’t know anymore. I can see why so many seem to be using strings of numbers or are just going down lists of names they find online.

Adventures are the process of sending a single Kolobok out on a mission. If they are successful they come back with a prize in different rarities depending on the difficulty and rng of the adventure. If they fail they are dead.

There are four different types of rarities when it comes to prizes on a successful mission. With the lowest tiers being command uncommon. With no use in-game for these prizes as of yet they seem to only have used elsewhere. Due to that, the prices for them have decently jumped off a cliff declining in some cases by 66%. What if someone is buying any of these at all.

The biggest thing I don’t like about the adventures, in general, is the lack of health being used in the game. While your Kolobok is displayed as having 100 health as of the last time I ran an adventure that meant very little. If your Kolobok fails they lose all health. There is no middle ground. If you the success you don’t lose any health.

As mention already in the above section for breeding stealth has an impact on success and speed has an impact on how quickly you run the mission. With it now being harder to have a successful birth and them being able to die during adventures I recommend always going with your highest stealth Kolobok that you are not breeding. Make sure to have your best breeding for replacements.

The higher the tier mission you take the higher risk of death. Without there being an in-game and very little use out of the game using the risk vs reward is hard to judge. I have not attempted to send any on the hardest mission since that would eat up an adventure slot with a very high chance of failing and death.

The first time a Kolobok is successful in each different adventure they gain an icon to indicate they have experience from running it. It gives them a slight boost in reward chances. If you are going to spend time acquiring that experience it might be best to not send them on the riskiest adventures with a high risk of death.

While the game starts you with one free adventure slot. You need to buy more beyond that. The first one if I recall was only 1 Wax. The next one will cost me 2. If that pattern keeps up buying a lot of slots does not seem worthwhile. Unless the prizes increase in value and become something people are willing to buy.

Once a Kolobok finishes a mission and is successful they need time to rest before they can do anything else. You can pay with Kbucks to resurrect fallen ones that do not seem worthwhile at least for now. With how massive people's breeding programs can become even with a low chance of success they are not that hard to replace.

This area of the game seems like it needs something more to it. Unless they plan on adding in other uses for Kolobok outside of breeding this is the only other thing you can do with them for the time being. With the lack of use case for the prizes, it feels like there will be some further additions to this part of the game at some point.

With this game being on Wax resource consumption is something to be mindful of. While you do get back over a period CPU and Net used to play this game. Ram is something you don’t and this game eats it like candy.

With Wax using Ram as storage, I wish they just call it storage. That way people would at least understand that is the resource they are paying to store information on the Wax blockchain. That also means when you run out you need to buy more.

To give you a comparison usage of Ram I’ll be comparing Kolobok Adventures to another game on Wax called Alien Worlds. On Alien Worlds the ram cost to accept your mining reward is 128 bytes per action. In Kolobok Adventures to run a two adventure, it's 1,840 bytes to send your Koloboks out, 1,092 bytes to close the 2 adventures, and over 3k bytes to claim all rewards and your Kolobok back. At the time of writing this.

I do use 2 adventures in the example above. That is simply because there are mass close adventures and a mass accepts rewards button. I can only hope those are at least a little more efficient than claiming everything one at a time.

While in the normal world bytes of ram has not meant much in forever. In the blockchain space such as Wax that is going to add up. With more demand for the ram, the amount you get per 1 Wax will decrease. Wax has also recently increased from 4 cents to 16 cents in a short period.

During my height of playing this game, I was buying 1 to 3 Wax worth of ram a day. I’m by no means the largest player in this game either. Many people breed hundreds if not more Kolobok in a single day. I’d hate to think how much ram they have to buy just to keep up with those demands.

If the cost of ram ends up go going sky-high over the long run on Wax either all the Kolobok or rewards the early players farmed could become worth a lot due to the cost for newer players to do the same thing. It could also end up being what ends the game for many as the cost becomes not worthwhile to keep playing daily. Resulting in even lower demand for a market already flooded with NFTs for this game.

As far as I’m aware the biggest use case for even farming adventure rewards in Kolobok Adventures was so you could stake them in R-Planet. That is however a highly speculative move that so far did not pan out for many unless they got in real early.

If I recall correctly you use to get 3 Aether per hour in R-Planet just for staking a common Kolobok Adventures reward. That was until R-Planet started rolling out their game and releases their own staking NFTs. That resulted in a major nerf across the board. Commons are only getting .8 each per hour now. I also would not be shocked the more games that get added for staking the less these will become.

Many were also expecting some massive moves in Aether once R-Planet started rolling out the game. So far that has been rather underwhelming to the point it’s not even keeping up with the huge increase in Wax price over the past month or two.

Despite Kolobok Adventures adding in a low chance of birth success along with all the Kolobok that get killed normally on adventures. Reward NFTs from adventures have taken a sharp dive in price. This solely seems to be a result of the nerf on R-Planet. Massive farmers are unstacking NFTs and trying to dump. Before that, there was a massive lack of supply.

This is one of those games where I have failed to get a single sale of any of the NFTs I have attempted to sell. I’m either so early in this game that the market is not there yet and future costs will drive up prices and reduce supply. The other possibility is there are too many NFTs in this game to go around and not much of a reason to buy any other than two Kolobok that you breed like rabbits.

Perhaps in the future, this game will become more developed. For now, the novelty of breeding Kolobok has worn off. I don’t see any more reason to keep dumping Wax into buying ram to keep playing. There is just no seeable reward with so many over-farming it and the fun has worn off.

Screenshots were taken and content was written by @Enjar. Screenshots are from Kolobok Adventures.