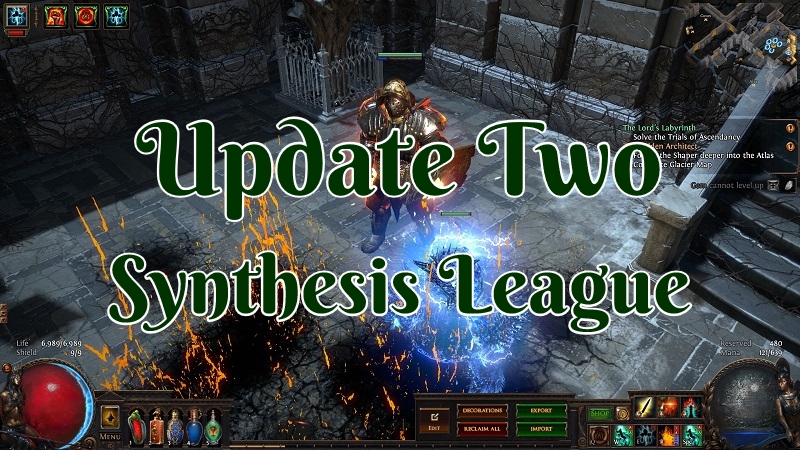 It’s been a couple of days and I’ve managed to accomplish a few things since my last update.

With how fast the early league moves I’ve been more focused on trying set myself up for a better middle league than anything else. Anything I can get my hands on right now can increase my cleaning speeds and make everything move smoother. As such I been watching the markets and selling about anything I can get my hands on if it’s worth a couple of Alchemy or more. To the point where I’ll be running a map and be down to one portal left just from all the times I’ve left just to make a trade with someone. 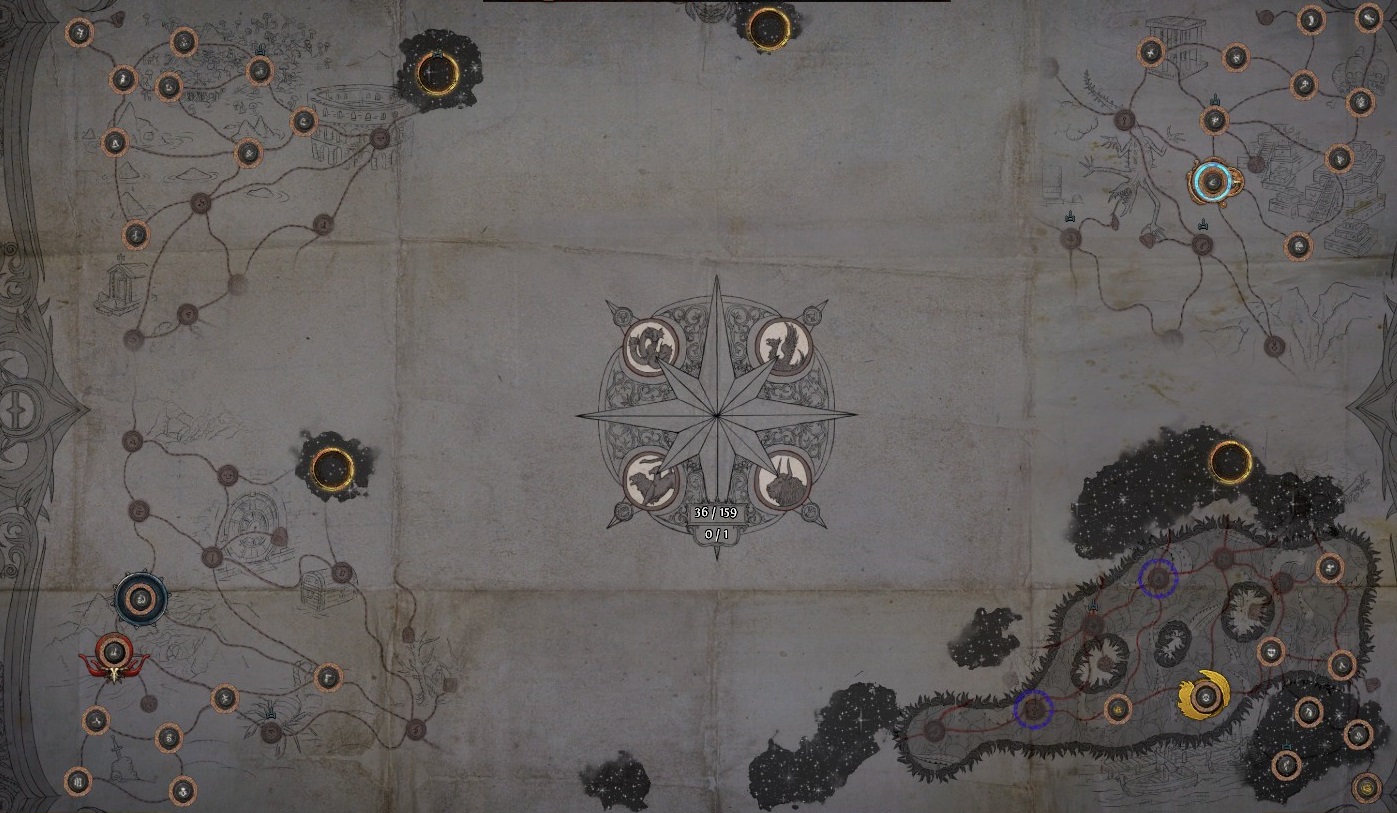 have tiers 1 to 4 all complete and I feel like I’m falling a bit behind on this part of the game compared to my gear and level. I’m just not getting the map drops I need to progress faster. While I have been buying a couple of maps here or there from other players. That also means I’m lacking a decent enough map pool to progress from that point unless I choose to keep buying more from others.

While Zana does sell maps it’s been a hit or miss on getting her inventory to reset daily. I had a couple of days where it was but she was only selling what I already had. Other days she just has not despite me progressing the storyline further once a daily. Perhaps I’ve overlooked something but this is a bit frustrating. Since she can be a decent little source of getting a few maps you were missing. 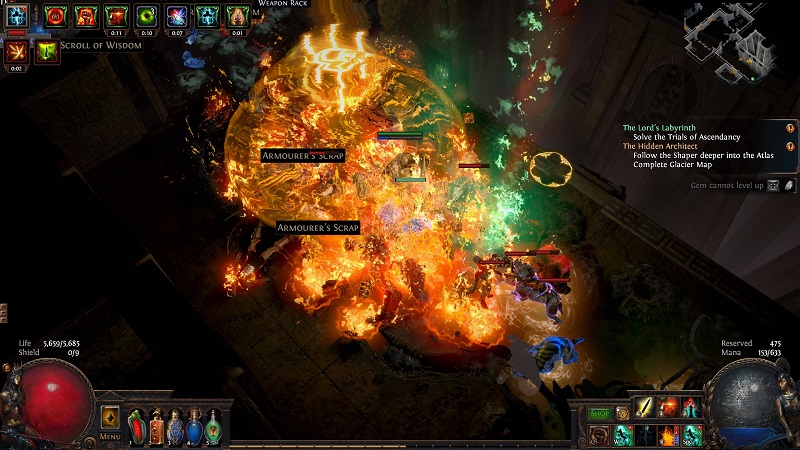 My juggernaut does finish off maps quite fast. Since I have Whirling Blades as his movement skill I’m just speeding from mob pack to mob pack and taking them out with Molten Strike.

It has gotten to the point now where I’ll Alchemy 10 to 15 maps at a time and just load up my inventory with them and just run them one after another after another. Hoping for enough of higher tier maps to progress or upgrading some lower once by trading with a vendor 3 for 1. While it would be a better deal to sell to players that can take a while and these maps are not worth too much.

I’ve been tempted to start Chiseling and Apprentice Sextants the maps that can drop what I’m missing at the higher tiers. The whole issue then comes down to cost vs what I’m getting out of these lower maps.

I’ve also been cycling through as many prophecies as possible while I’m just chain running all these maps if they are not worth much. Despite this from how many Synthesis has been dropping I have over 70 Silver coins now! I’ve been saving or selling some better once.

While running these many maps as I have been I’ve made sure to keep up on running Synthesis dreams and running them along with Sulphite for Delve. 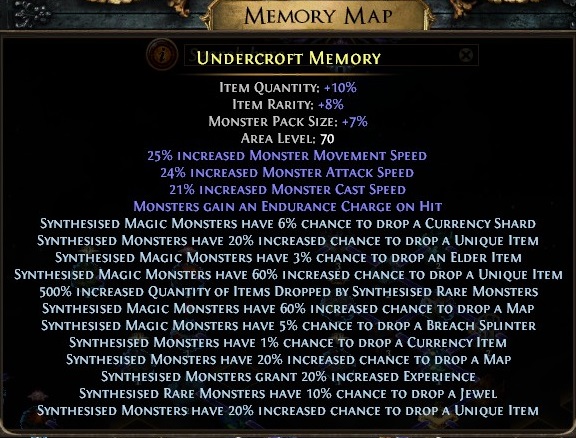 While it feels like I should be getting more loot I’m also sure there still some lack of understanding on my end still. Some zones I’ll run through drop just piles of certain mods while others you would almost not know they even had them active. 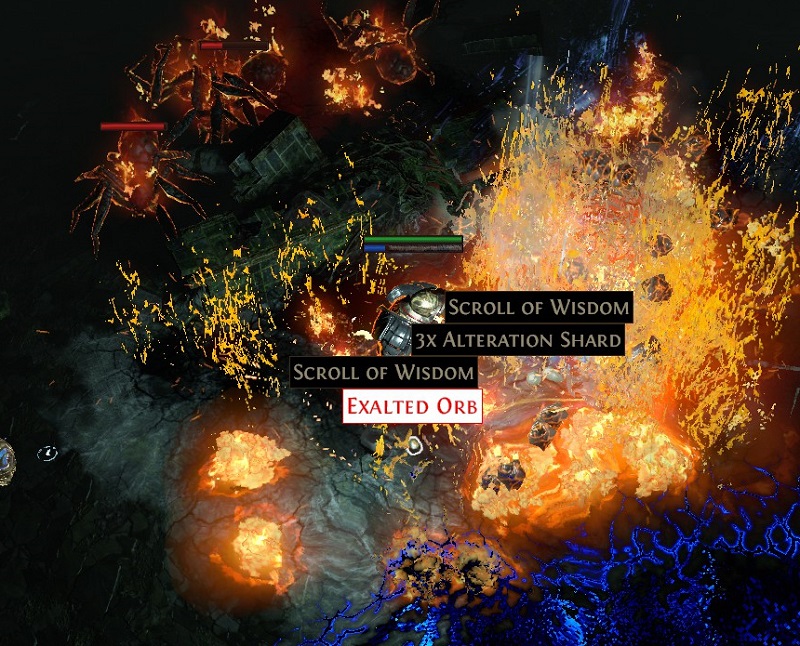 I have lucked out had two Exalted Orbs drop related to running Synthesis content. The first was while running a dream while inside of a map. The second was running the Memory in the Nexus. On the second one, I did have 500% quantity and a Synthesis monster drop more currency modifiers. So I do think that played a huge role in getting it.

I have also been betting a lot of Elder items to drop. Most of them are worthless nowadays but certain rings or a double skill armor piece could be worth quite a decent amount. Right now I have about 4 Exalt worth of Elder items up for sale but things are not selling. I’ll keep discounting and hoping to find a buyer or just junk them. Many of them are very odd combos that I really have no idea if anyone could even use them. If I can at least get an Exalt or two out of the ones I have over the weekend I’ll be rather happy about it. 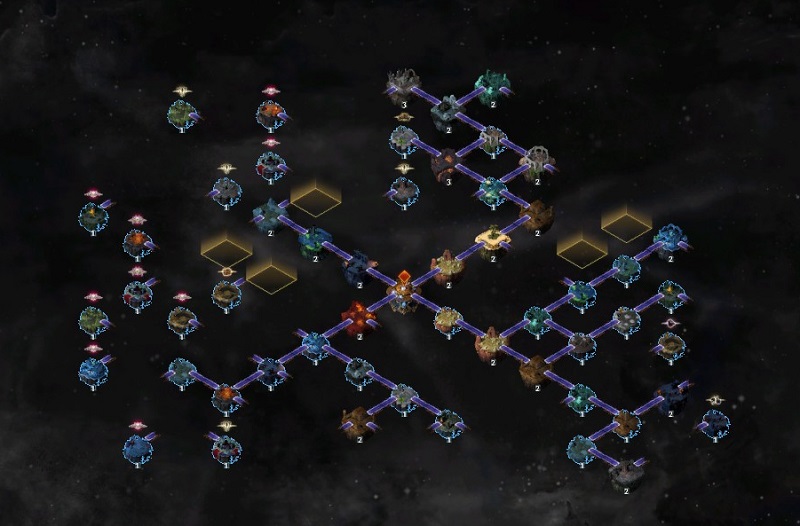 Otherwise, my Nexus has just been quite the mess. I’m just running and connecting what can when I can. The developer has been making some changes and fixes to things as they have displayed in recent patch notes.

I’m hoping I either start getting some sales or get an Elder drop I know is worth quite a fair amount. There a couple of items that could be upgraded for me as well if they drop. So I’ll keep running and trying out different things here or there. Will have to see how they keep patching and making small changes to it as well. 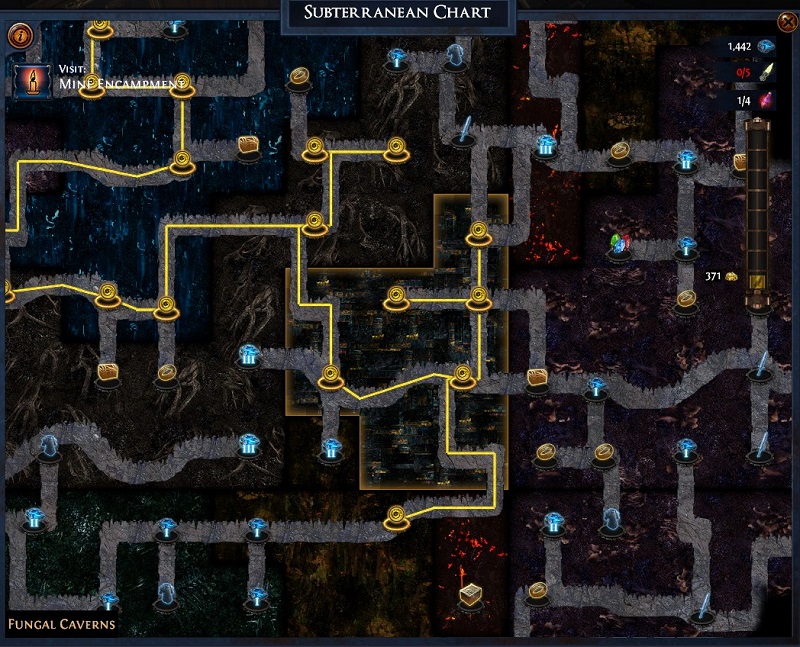 I’ve made it to Depth 97 and my biggest hold back is not having enough Sulphite right. I’m not sure how far my current gear will let me progress but I feel like I have a decent amount of space to go before I need further updates.

With how much tank and having Whirling Blade it has made exploring the darkness really easy. While I don’t try and do it while I’m pushing progression. I do go back and just run down the paths in giant junks. 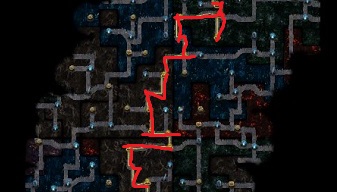 I’m still using my old method of taking a screenshot then marking off what I’ve finished. So if I get confused or take a break I’m not forgetting what areas I’ve cleared out all the extra goodies left behind. I have around 40 depths worth of loot I’ll be running tonight once I get to 100 depth. I feel doing it every 50 or so depth, for now, is working out great.

I have come across three cities now. Nothing really amazing out of any of them. I’m hoping that will change as I get deeper and deeper the next time I find another one. 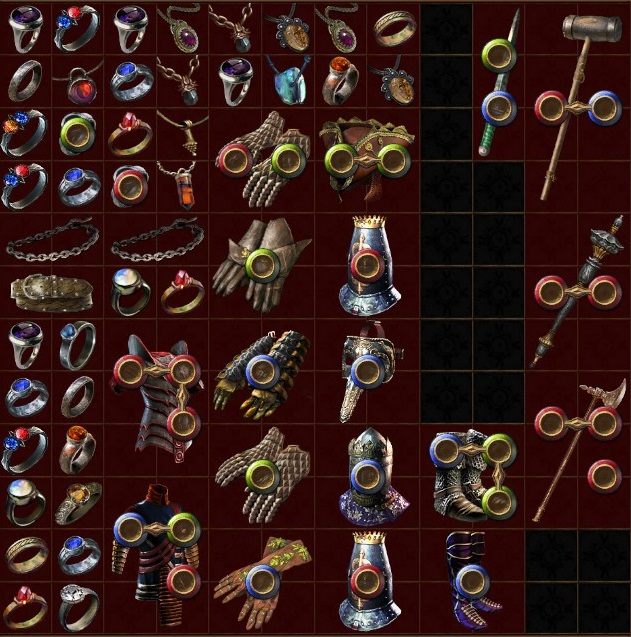 The great thing at least is I’m filling up on a bunch of amulets and rings every time I do any Delve runs. I’ll sometimes come out with 10 or more amulets. Which I’ll turn into 20 Chaos with that vendor of including the full set of items. Amulets are always the hardest to find! As you can see I need to make some exchanges again as my stash tab is getting full that I keep it all organized in. 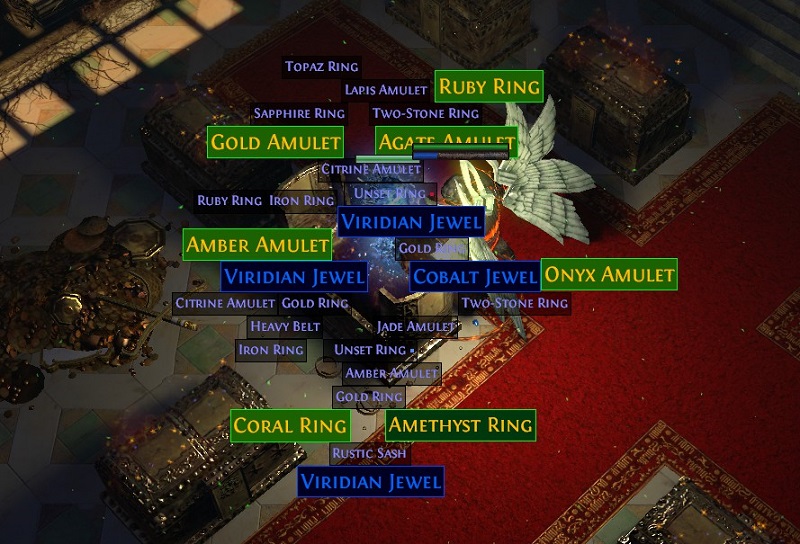 I have finally found the 6th and last trail I needed today to unlock and run this Labyrinth. I have also been saving the key needed to enter them –Offering to the Goddess. I had 12 and I ran most of them today.

In most leagues, I don’t spend too much time trying to get good enchants. Other times people who run Labyrinth for profit will get an enchant I’m looking for and list them for an ok price. These people often run with a bunch of commonly used helmets or least good stats. So depending on the enchant it might not be too much.

The issue here is I want +3 to Molten Strikes projectiles. Since my chest cannot have sockets on it my helmet is an elder one with two skills on it making it like a six-link with the four skills I have in it. Which cost me at the time 2 Exalted Orbs. This means most people are not running labyrinth with the kind of helmet I want. Since it’s costly and very niche. Last time I looked there were only +2 enchant to Molten Strike and people were asking for 20 Exalts or more. No thanks! 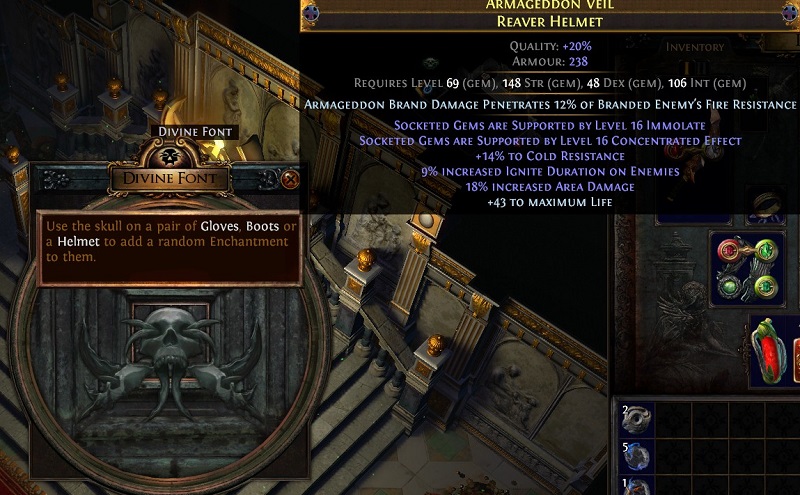 So I ran all the keys I had and no RNG luck of getting what I wanted. Since you can get any enchantment on the helm and have no idea until you use the enchanting device which also removes the current enchant. It’s going be just a giant gamble. It’s tempting to buy a second helmet just so I could keep anything “useful” till I get what I want. That, however, would be a 2 Exalt investment and I doubt that second helmet is worth that by the time I get what I want and sell it.

There is a Prophecy called Twice Enchanted. That lets you use the enchanting device twice per run. They are quite costly and I’m not really at a point where I want to toss too much more money into trying to get the enchantment I want.

I might just end up dropping down to a lower Labyrinth that does not require a key and try to go for +2 enchantment. They would also be quicker to run. I’m not the best at remembering zones or layout so a full Eternal run takes me around 7 to 8 minutes. I could be using my time better elsewhere as well.

This will more than likely be a middle to end league goal of mine to accomplish. For now, I’m not being held back from lacking it. Maybe by then, some cheaper options will be around when people go for maxing out there setups and offload their older gear for a better price. 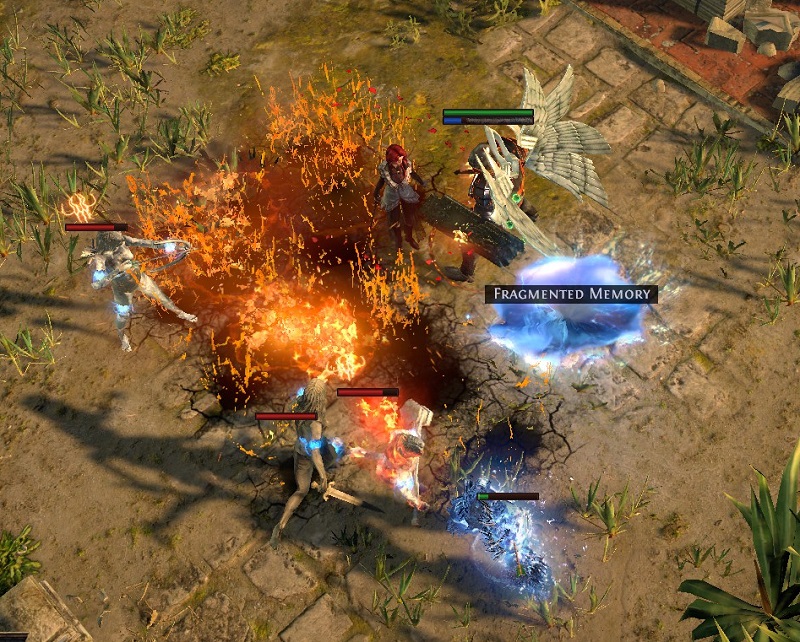 Since my league starter, this time around is also the character I hope to push further than I have before. I’m quite far ahead in gear and even map progression when where I have been in the past. After this weekend I’m going cut back my hours played by quite a lot. I should have set myself up in a nice position to have a really amazing league.

There around 15 Exalt worth of gear upgrades I have my eye set on. Over time some of those prices should drop or I might luck out and snipe an item, someone, just trying to offload since they no longer want to wait around for a better price.

Hopefully, I’ll start getting some decent map pool built up and I can leap forward in map progression. I’ve made it to level 87 and it’s what is holding me back.

I’m not quite sure how often I’ll make a league update. It’s hard to just set a date and hope by then to have enough done to make it worthwhile to create one. Until then have an amazing Synthesis League!

Screenshots were taken and content written by @Enjar about the game Path of Exile.