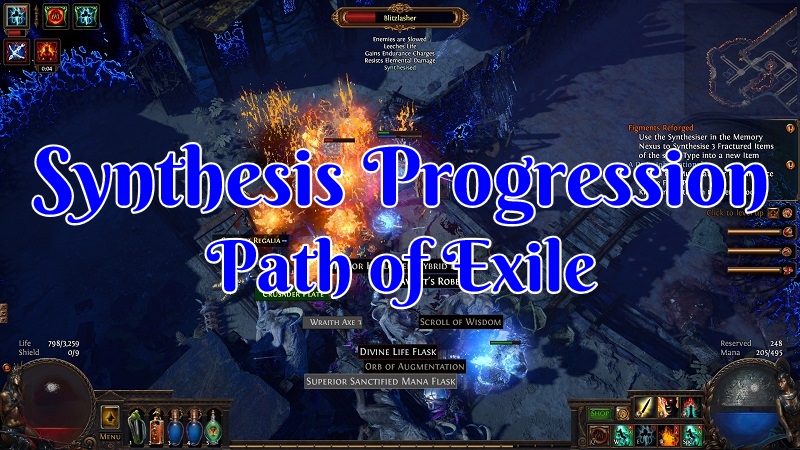 With the hardcore race ending the other night, I leap into action full speed ahead into softcore.

In the first week in a fresh league, you have a few interesting things going on. Lower tier items that are usually worth very little are selling like hot cakes as there just not enough supply of them yet. Higher tier items while in very limited supply lack the demand of people being able to afford them. Then you have end game stuff no one has yet or would not sell at the lower prices the markets can afford right now.

No joke as the hour's tick by pricing are plumbing or sky rocking as supply vs demand plays out. This is why I’ve made sure before calling it a night to upscale any currency I can and sell off what I don’t need. While at the start every night to go on a buying spree of upgrades. Doing the reverse of this and you are more than likely going be selling for less than you could have gotten and paid more than you would have hours later. 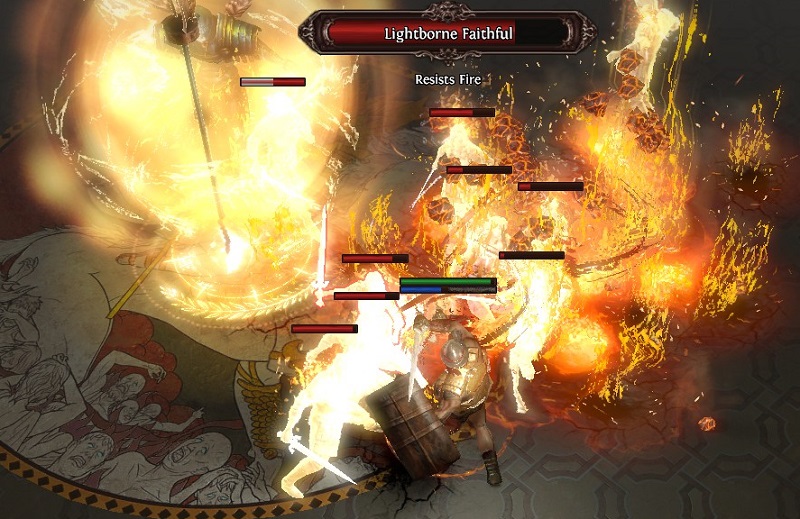 I’ve never played much of the Marauder class I have always found they are just rather slow to level up. This time around I wanted to change things up a bit so I took the chance of starting off with one.

While normally I pick something that has the more clear speed that I can run and gun as they say. I always spend too much time on them such as a shadow with totems or traps. As such by the time I end up starting another character, we are already a month(s) into the league.

This guy did take a few more hours then I’d have like to before he was into maps. I picked up Molten Strike right away and found it to rather lackluster. As such since he did not have access to at the start to pick up the trap skill I ran a Shadow to the starting zone to buy him that skill. Which he used for a little while till I got him a decent weapon.

Once he was able to buy Whirling Blade to use as his movement speed skill I was able to make up some lost time. It was always a struggle of finding a better weapon that he could use. Most swords I found had high dexterity (dex) requirements. Which is something he is lacking in the skill tree. Thankfully I found a double dex amulet.

As far as the markets went. Any gear I bought for him become quite worthless by the time I went to sell it back. Just a couple hours and prices went down by a lot. I at least made good use of where I spent the money I had. Often times doubling his damage output each time.

There was this one sword in particular people where selling for 4 Chaos Orbs I happened to snipe one of the markets for 2 Chaos. Four to Six hours later it was worth only 1 Alchemy (1/4the price). Ouch! The amount of time saved was well worth it though. That upgrade also lasted a while as far as leveling upgrades go. 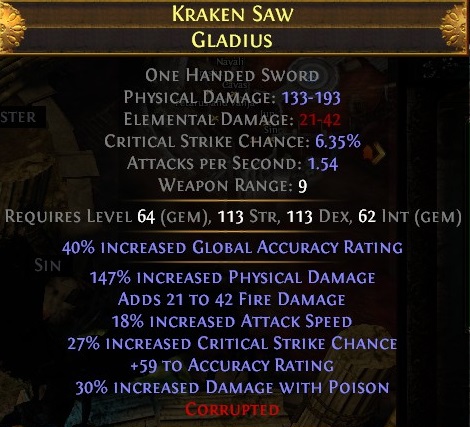 When I got into maps I picked up this sword for only 1 Chaos orb. Comparable where going for 30+. The biggest difference this sword was corrupted. Paying for a non-corrupted version with similar damage I knew would not be worth the investment.

I’m going be using it till I get my end game sword a Grelwood Shank. While it will have around the same sheet dps or a little less. It comes with some abilities that will bring up my damage. When I was keeping eye on that sword it was going for 3 Exalts. Now it’s down to 2 Exalt (168 Chaos Orbs). Maybe I’ll luck out and I’ll snipe one for just one. 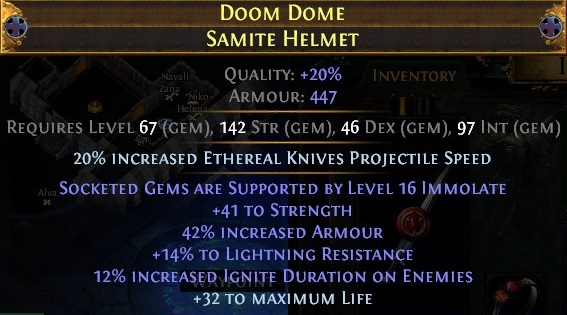 Many right now are shelling out quite a fair amount still or are trying farm just a 5-link chest to progress further before they get a 6-link. Since I’ll be using a Kaom’s Heart that does not have any sockets I get to use a cheap 5-link equivalent. Elder items can roll skills on them. While getting one with two that I want will cost quite a fair amount. People are just selling off once with just 1 skill on them for next to nothing. I got quite the deal on the helmet in the screenshot! You can ignore that Ethernal Knives roll on the helm it was not the random enchant I was hoping for from doing a Labyrinth. 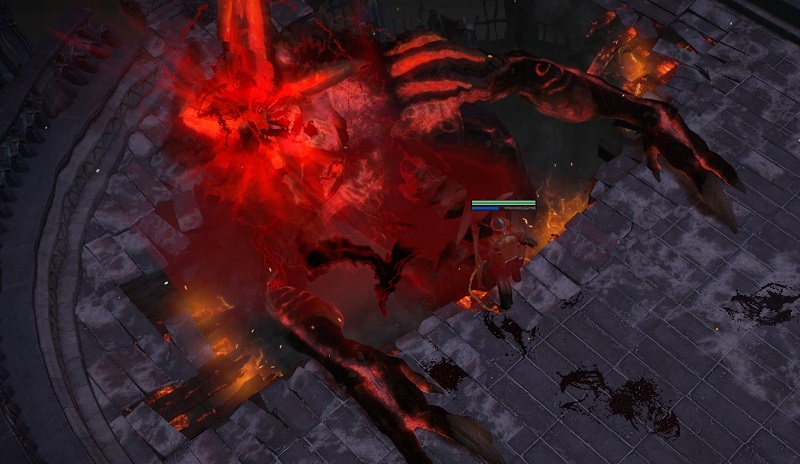 This is Kitava getting killed in Act 5 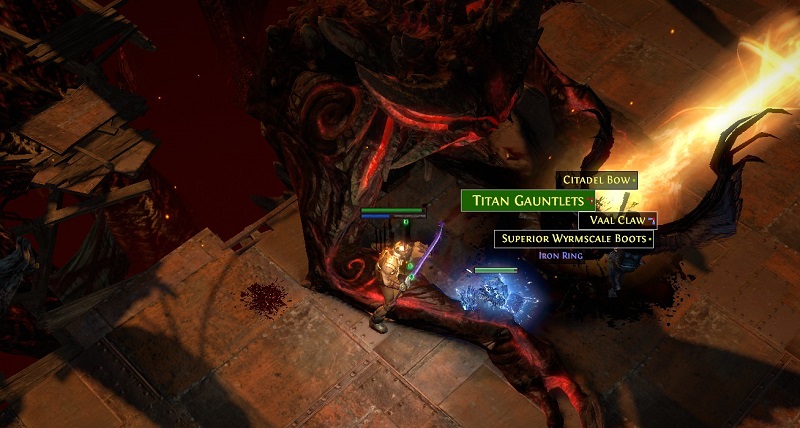 This is Kitava getting killed in Act 10. Any questions? No? good moving along to map! 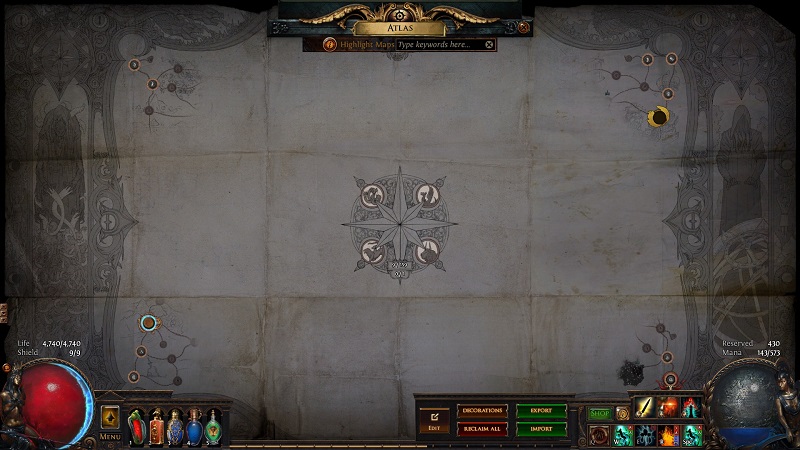 I’m a little light on the damage side of things. Something I hope to resolve in the next couple of days. For now, I’m farming up tier 1 and Tier 2 to create a bit of a map pool. I should be able to do Tier 3 as well without much of an issue. Beyond that, I might just need further levels to assist until I get some better gear.

I do love the sight of an almost clean map. So many fun adventures to be had. They moved locations around on the map somewhat. I’ve not peaked yet to see where my favorites have landed. I would be happy if some of them made it into Red tier but I don’t see them putting something like Beach up there. 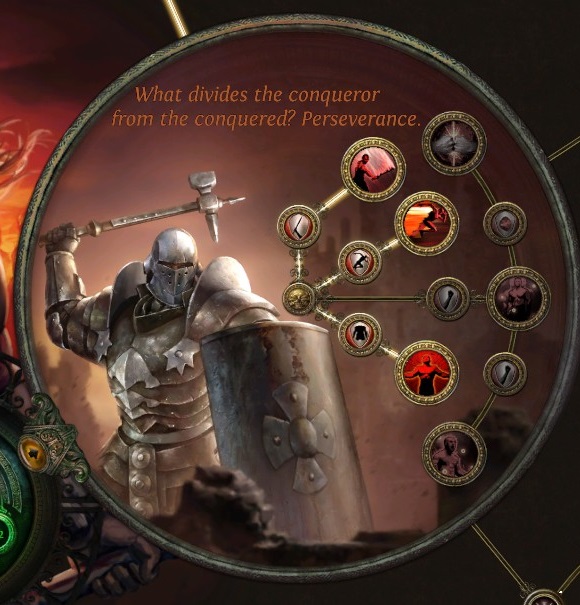 I’ve made short work of The normal, Cruel and Merciless Labyrinth. They were a lot less effort then I was expecting. That is a major benefit to this Marauder. Between how tank he is starting to pick up and moving with Whirling Blades they did not see what hit them.

Nothing of note loot wise or enchant wise gained.

I’m still a little too low in level, lacking gear and finding the trials to unlock Eternal Labyrinth. This time around I’m going need to farm them. I don’t see someone having an Elder helmet with two skills I’m looking for and the enchant to increase my Molten Strike. Which you can get from running Eternal Labyrinth. That is a rather oddly specific helmet and tends to not be something I’m aware people even try and farm for selling. If someone is trying selling one it will be quite costly.

These went down so far without a single death running them. Much sooner then I tend to as well. Always great to have these out of the way and pick some extra skills up in the tree. Cheers to becoming a Juggernaut!

While rather rippy these things are just jam-packed full of monsters to slay. As such, I was speeding across zones and picking up memory fragments up so I could go into the memory and farm some crazy levels. I had one chain that netted me 2.5 levels and 42 Silver Coins.

I’m still trying to learn the mechanics but it really is like trying to solve a puzzle with the pieces you have and the best use case for them. If done correctly you can really add on the mods to your remaining memories as seen in the screenshot. This comes from going after Memory Modifiers they affect everything that is connected and effect once you complete that memory. I can really see this stack up like crazy for end game.

Right now I just have a bunch of pieces I have very little use for. As such I’m still learning how this works and just hitting up anything that looks worthwhile. I’ve not seen anything yet like currency chests but if I do I’ll go for it.

The pieces themselves come in all kinds of different shapes. Some have areas to enter/exit from while others have up to four. An exit also can’t touch another piece unless it’s the entry point into another memory. So you can quite easily block yourself in and have to release a dream with uses left to go after something else.

I think it’s going be a rather fun league trying work out best use and see what this all has to offer. Even more so once you start getting a lot of modifiers stacking. As long as you are able to clear it that is. Lots of deaths await inside these! 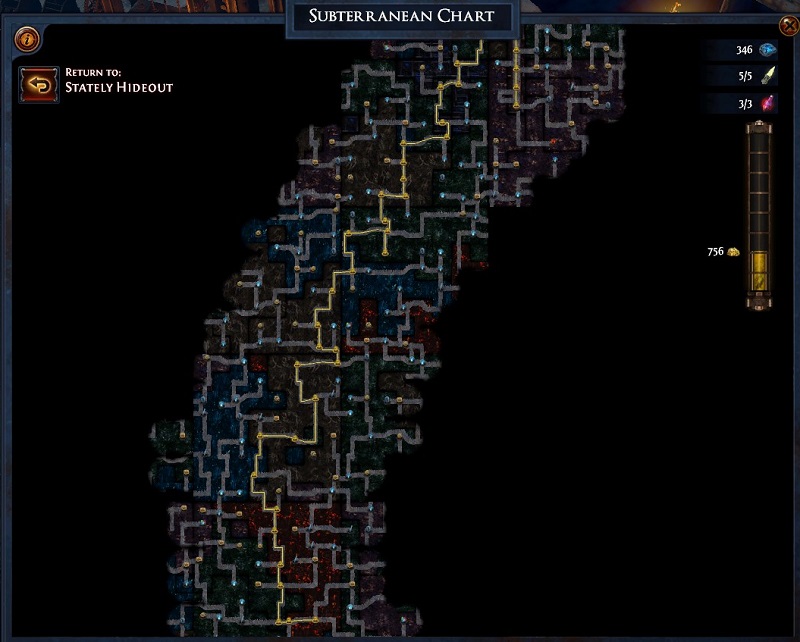 You know I could not stay away long from this. I waited till I got into act 2 where they progress you a little further along in the mine for free.

After that, I noticed there were some currency nodes near me and I ended up getting around 20 Chaos while I was still leveling up between them and item drops.

This still has been my biggest money maker even while I’m in maps and messing around more with Synthesis. They did nerf many of the drops at the lower levels for Delve. I’m hoping soon to be coming into areas worth farming the darkness.

I’ve made it to Depth 55 so far. I’m really lacking the damage to go much further for the time being. So unless I am getting near max Sulphite which I upped the cap on to 3k I will restrain myself from going down there. 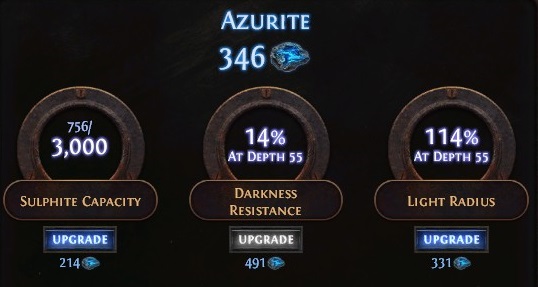 I do need to find an ok level to start farming some Azurite out of to buy upgrades so I can go farming in the darkness. 14% resistance is rough! I also would not mind more light. At least I’ve upgraded that a bit before you almost could not see from the torchlight.

We will have to see if I enjoy Delve or this new league more. So far I’m still really loving Delve but if I’m unable to turn a profit down there and can’t afford to keep supplying myself with more Sulphite it might be time to move on.

I knew to go into this that playing a Marauder was going be more of a struggle early game then I'm used to having. I’m also hoping he can go the distance and take me further I’ve ever been in a league before.

All in all, I’m having a blast! Can’t wait to play more with the new league and make it rain loot like I think it can.

I hope everyone been having a wonderful time so far playing. This seems like a great league to get into this game.

Screenshots taken and content written by @Enjar about the game Path of Exile.