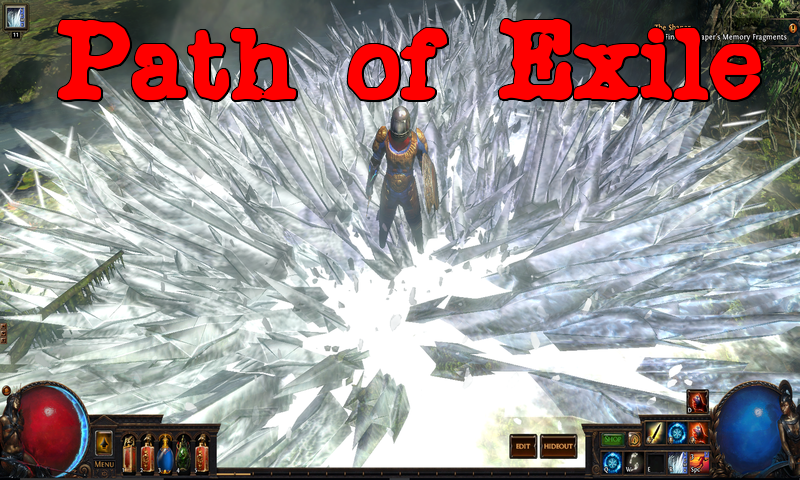 Many people consider Path of Exile the way Diablo III should have been. Personally, I like having two similar but very different games. Path of Exile is an f2p game I have enjoyed for a way too many hours. It has very complex systems, choices, and options that make playing as unique as you want it to be. 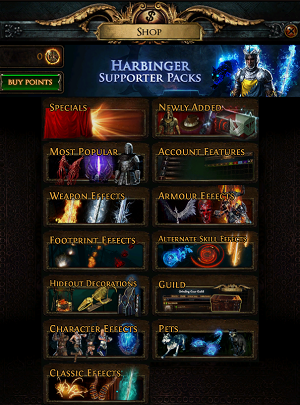 Quite an alarming amount of f2p games you see out there are either moba (multiplayer online battle arena) or fps (first-person shooter); the rest I find are riddled with p2w (pay to win) cash shops with heavy time gates of endless Korean style grinding. Others that claim to be f2p are really just extended trials where you still got buy majority of the game

Some will argue that buying perineum bank tabs is p2w. I just view it as being very convenient and you not required to download a third-party application to sell or buy things from a player item website where you spend in-game currency you loot to barter with other players for that item.

Free accounts start with 4 bank stash’s that are shared across all the toons in the same league. 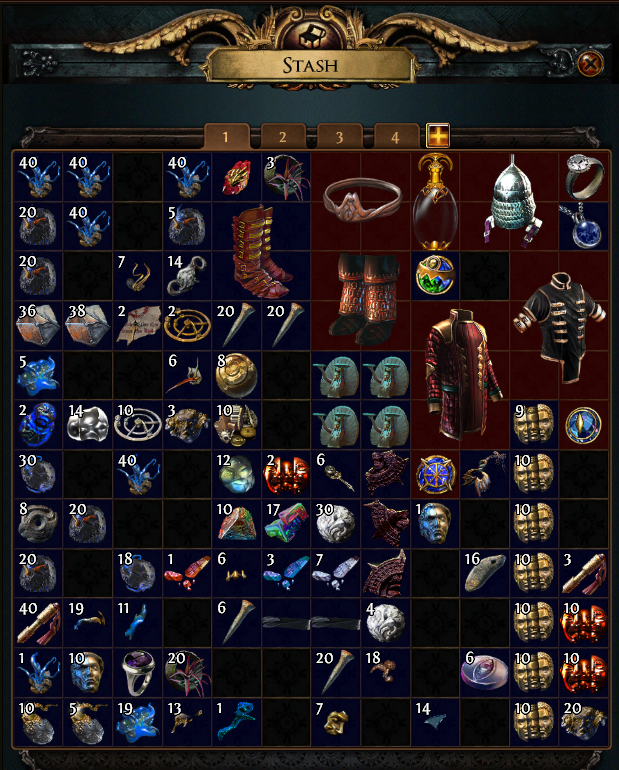 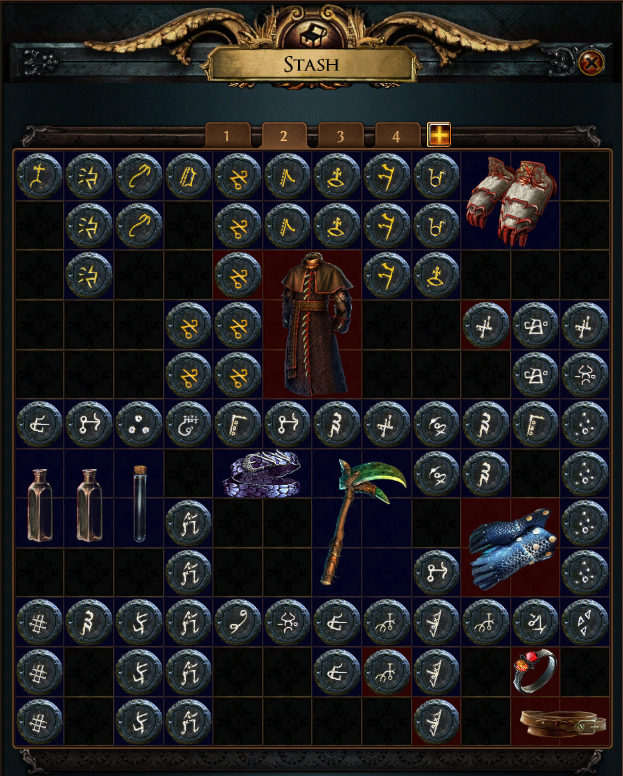 As you can see from my rather 2 messy stash tabs I have shown they carry a lot of space.

Even when you find yourself wanting more space you just use another character to hold onto things. Free accounts can have 24 character slots!!

This is one of my toons I use to hold spare currencies, scrolls, and sacrifice fragments that I don’t want taking up space in my bank

All in all, I find the f2p model to be so fair here towards the player. I admit I’m still an f2p player after 532 hours. I know I’m a rather evil person enjoying that much play time within a game and not paying the developers for their hard work. Once I have some spare disposable income where I can buy some stash tabs, and item skins I will because my toons armor is always ugly!!! 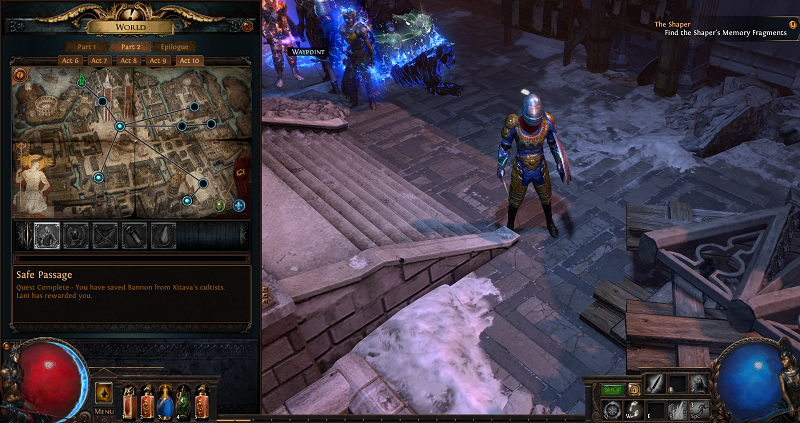 If you ever played a game like Diablo you know the drill for these kinds of games you progress in the storyline and then redo it all over again on different difficulties.

While Diablo III finally did give players options of doing away with repeating the same acts over and over with the adventure mode. With Path of Exiles recent patch 3.0 they removed the difficulty levels and gave you more acts to progress in the storyline.

Now to be fair they did reuse art assets and changed the looks of landscapes to go from 4 acts to have a 10th act. The story, however, progresses from act 1 to act 10. You revisit many of the same areas as time has passed and you see what liner story actions effects had.

A lot of people joke when they first see the skill tree proclaiming “is this a map to the universe?” Here is a link to see the full map in all of its glory.

Picking your class just decides where you start on the skill tree.

If you, for instance, you choose to play a Ranger that uses a 2h sword and that charged dashes into packs of mobs and then whirlwinds around the screen to killing the thing you can. In fact there even build for that called Debeon's Dirge Charged Dash under Harbinger league spoil on that form post

Even with all my play time I often go with premade builds others have come up with. Simply put it’s a rather complex thing to take into account: gear, sockets, skills, and support, with the passive skill tree. 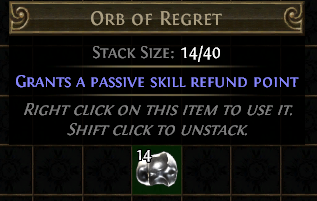 Most choose that option as it can take a fair bit of in-game looted currency to respect to another build. 1 orb of regret only respects 1 passive skill tree point. My main picked up 20 refund points for free from questing. I’ve also so far only looted 14 Orb of Regret from the current season. If I ever needed more than that I would need to trade for more orbs from another player or hope more drop.

Lots of Skills and Support Options 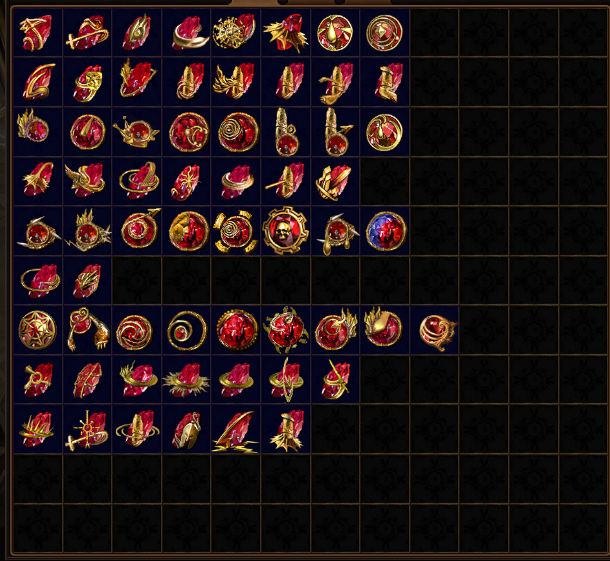 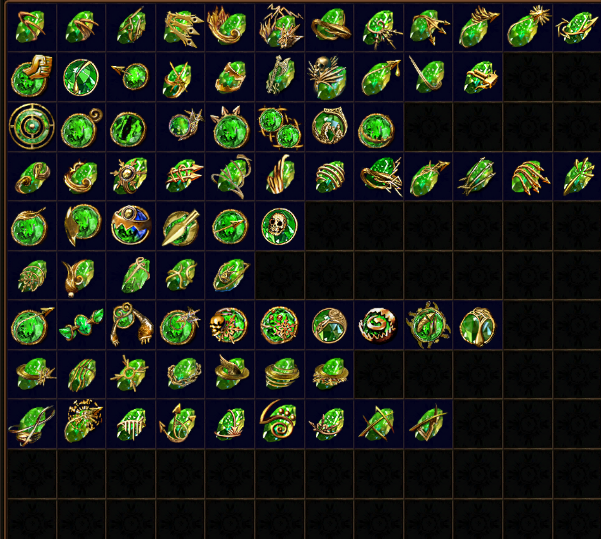 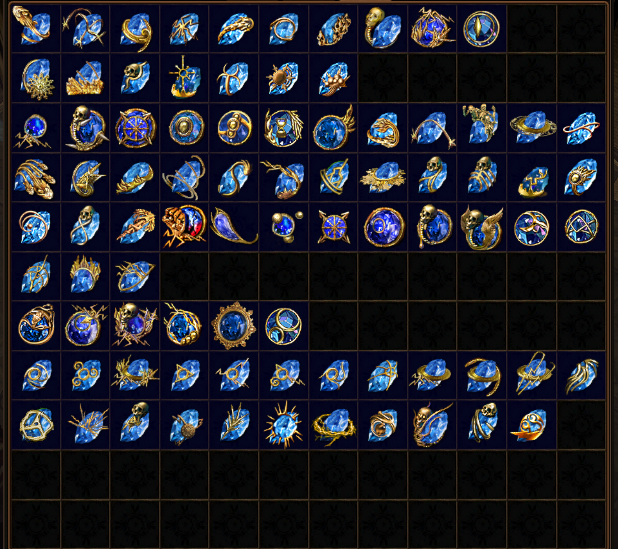 As I was saying early this game is complex. These are just some of the main skill and support skill gems you can socket into armor.

I won’t get into the complexity of socket colors, linking, sockets, and theory crafting of finding great combinations to go alongside your passive skill tree and gear. I am simply going say you can have up to 6 gems in either a chest piece or a two-handed weapon if the rights conditions are meet. 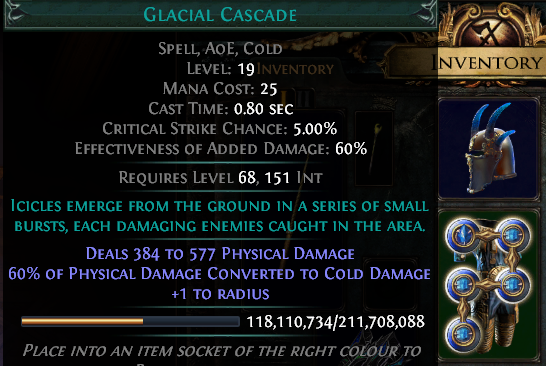 For example my current main this season has a chest with 5 linked blue sockets in it so far. So he has 1 skill gem Glacial Cascade and 4 support gems in it. The 4 support gems in it do things like place a mine for skill, drop 2 extra mines at a time, reduces area effect but gives more damage, add extra physical damage as lighting.

Results of all that is I drop mines on the ground and when I trigger them I send a wave of ice spikes out and in a very wide area of effect. I just love the look so much. This is just one of a crazy amount of combinations used with a lot of different skills.
That happens to be my main attack skill; my other gear helps me in other ways with combinations skills. Such as movement, buffs, debuffing

As you can imagine, unlike other games where you feel so limited by how many skills there are. You can do a lot of crazy things and be unique as well if you can make it work. 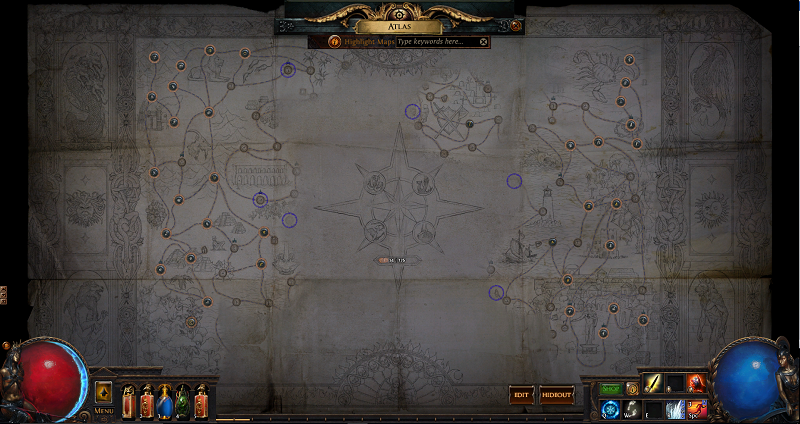 Once you get to mid-level 60’s you start to run maps. This is what most considers being the bread and butter of the game. If you make it to this point you are expected to have fallen in love with the game.

I’ll be honest I have not been anywhere near visiting the over 100+ base maps on the Atlas.
You loot maps that drop and place them into a mapping device. This allows you to choose what maps you want to run, how hard that map can be (normal, magic, rare, and unique). 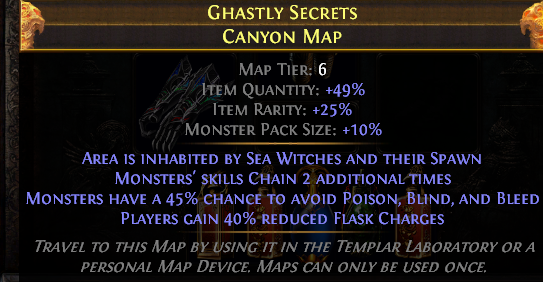 After playing a while you learn what maps you hate and don’t pick up. What maps you love but don’t want to kill the boss in. Also modifiers you prefer on a map or once you want to skip altogether. 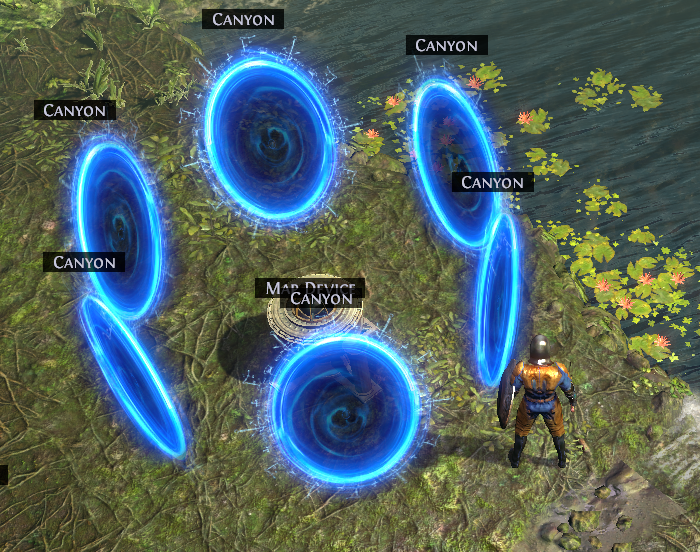 Maps have a nice risk to reward ratio. I have 6 times I can enter into the map either from deaths, or filling my inventory. After that that the map closes. 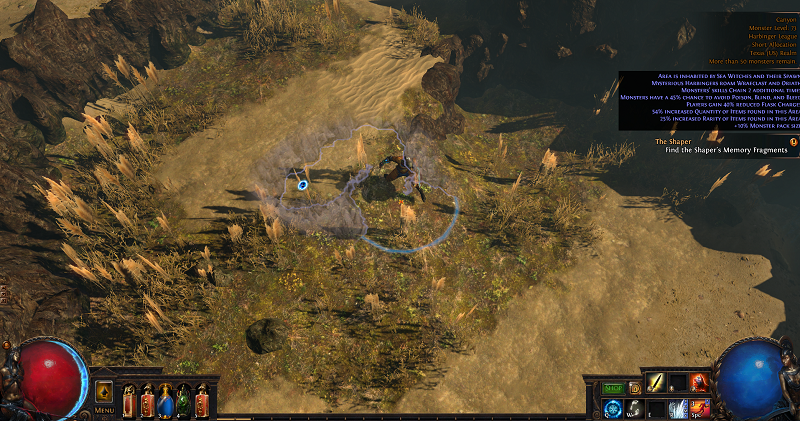 Off to run another map. What loots will I get? Well, I am not telling you!

Everything written is my own expressed opinion of the game Path of Exile in accordance terms of use .

All screenshots where taken in game by @enjar from the game Path of Exile created by Grinding Gear Games.