Some days I dream of Path of Exile 2 and the lack of information on when it is coming out is a bit disappointing. One of the major things in it is an alternative route of acts to take to get into running maps in the game. Since that is not an option it’s now off to an act I can’t’ stand going through anymore. I’m not sure what it is about damsels in distress in video games but I’m over it. I wish I just had the option to leave her to the guards and head right into town. Sometimes the trigger for this event is even a bit buggy and can take a while for the animations and script of saving her to run.

By the time it’s done I could have already been in the town having a drink and not thinking a second thought about her. I swear I’ve now saved her 100 times and just once it is nice not to have to do so. Here to needing to drink before having to save her another 100 times in the future. Act III is quite a linear act. Outside of picking up a couple of things ahead of time before a quest requires them. There is only one way to go and that is through some dirty sewer, into a palace, out onto a cold dock, and so forth. Ok, so I’m forgetting a few connecting areas I knew them like the back of my hand so I see no point in listing them all.

Just the thought of thinking about it I can see myself already running through it all over again. If I could remember my dreams I’m sure they are nightmares of being stuck in Act III forever having to run it over and over again. 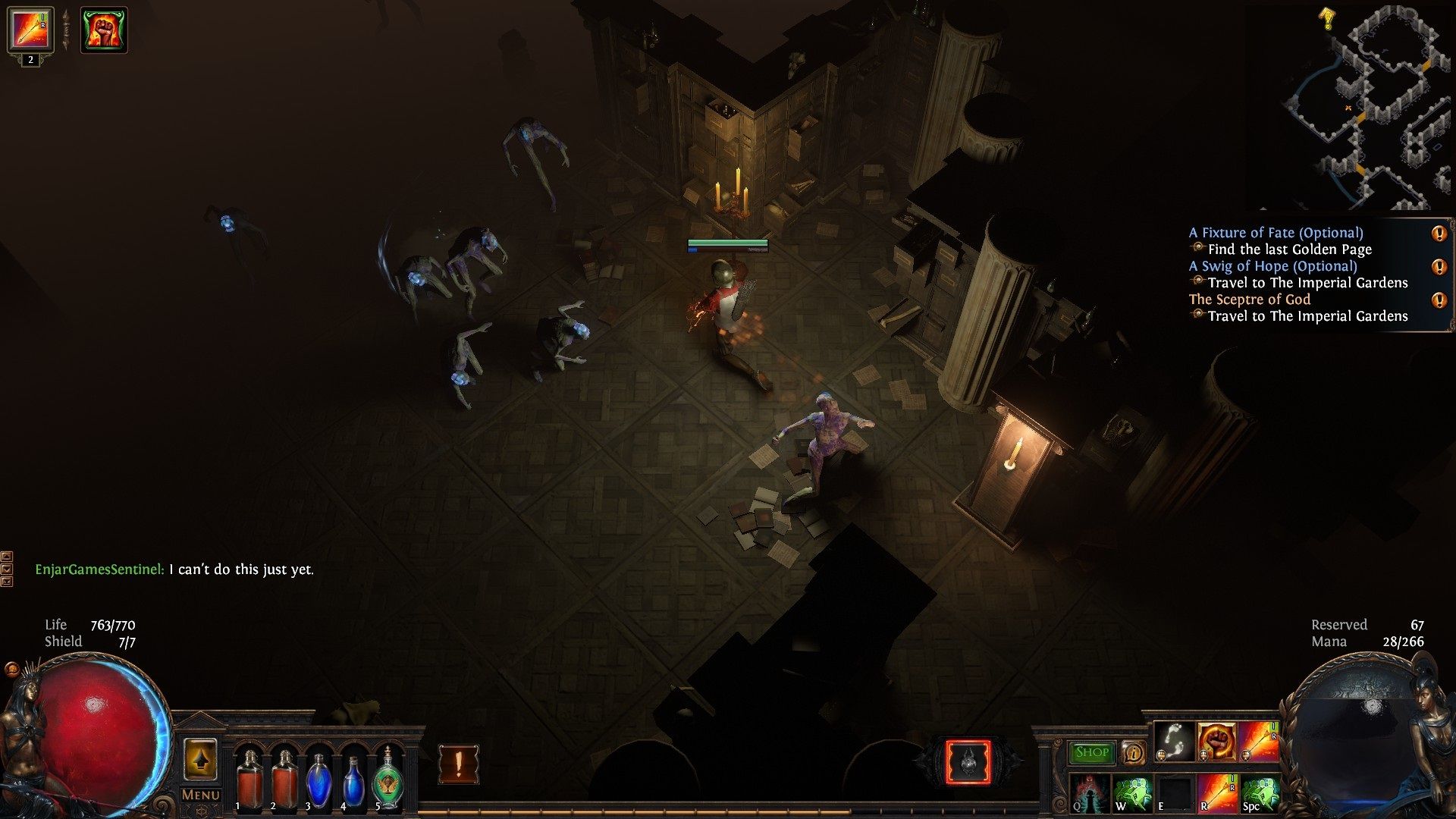 The most important thing about Act III is the library. There is a quest in there that you have to find some golden pages in an area behind a fake bookshelf. This unlocks access to an NPC that sells just about every normal skill gem in the game. 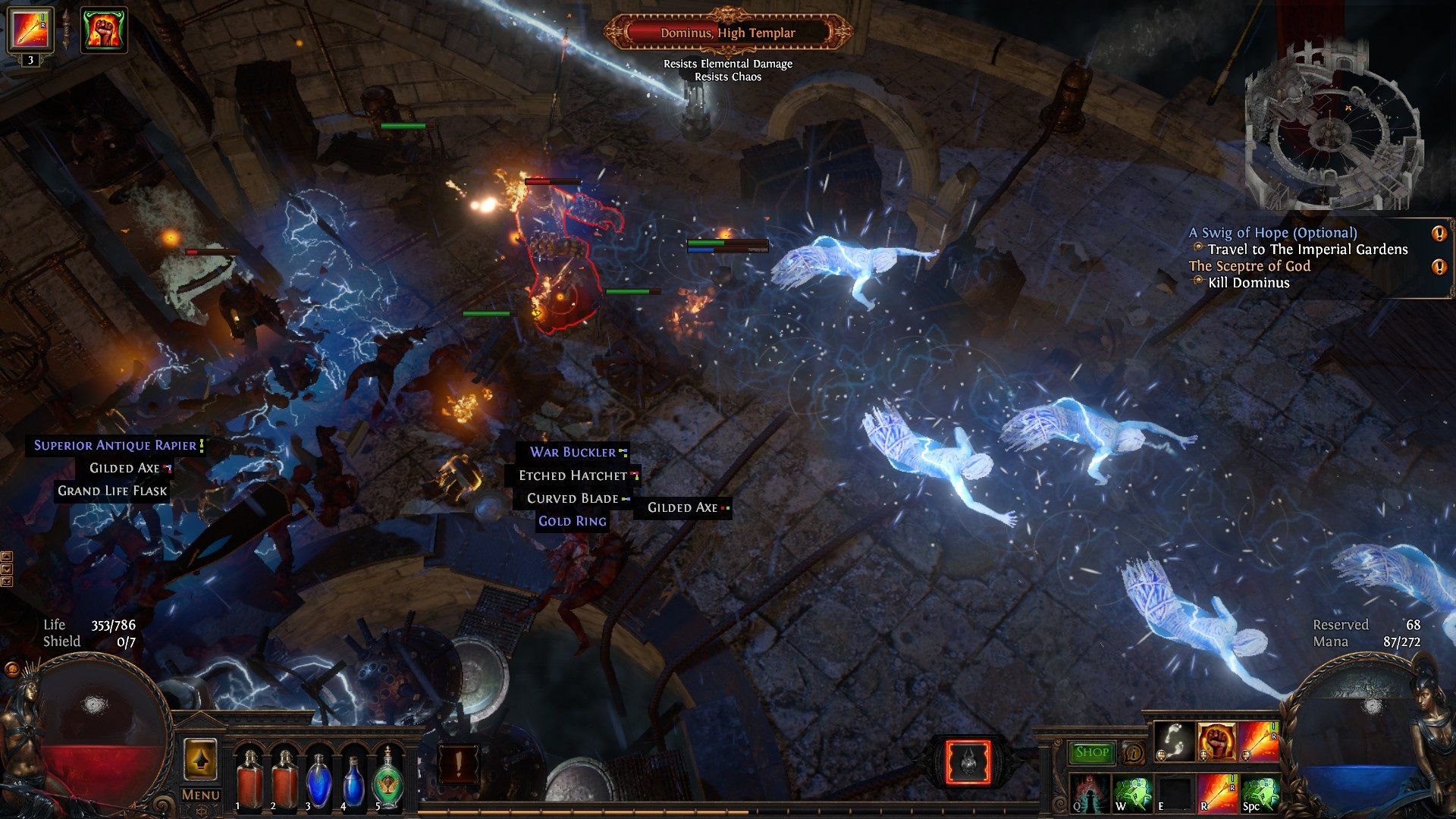 While I was attempting to “enjoy” the leveling process in this league I just had to run fast through act III. Thankfully I can just skip ahead to where I kill Dominus the act’s boss and move on to a more pleasant time and place.

Thankfully act IV is the kind of place you get to enjoy yourself if you like. It is perhaps the act I’ve spent the most time in of any acts in the game. It has often been my spot for sitting in an area and getting a few levels if I was falling way behind. 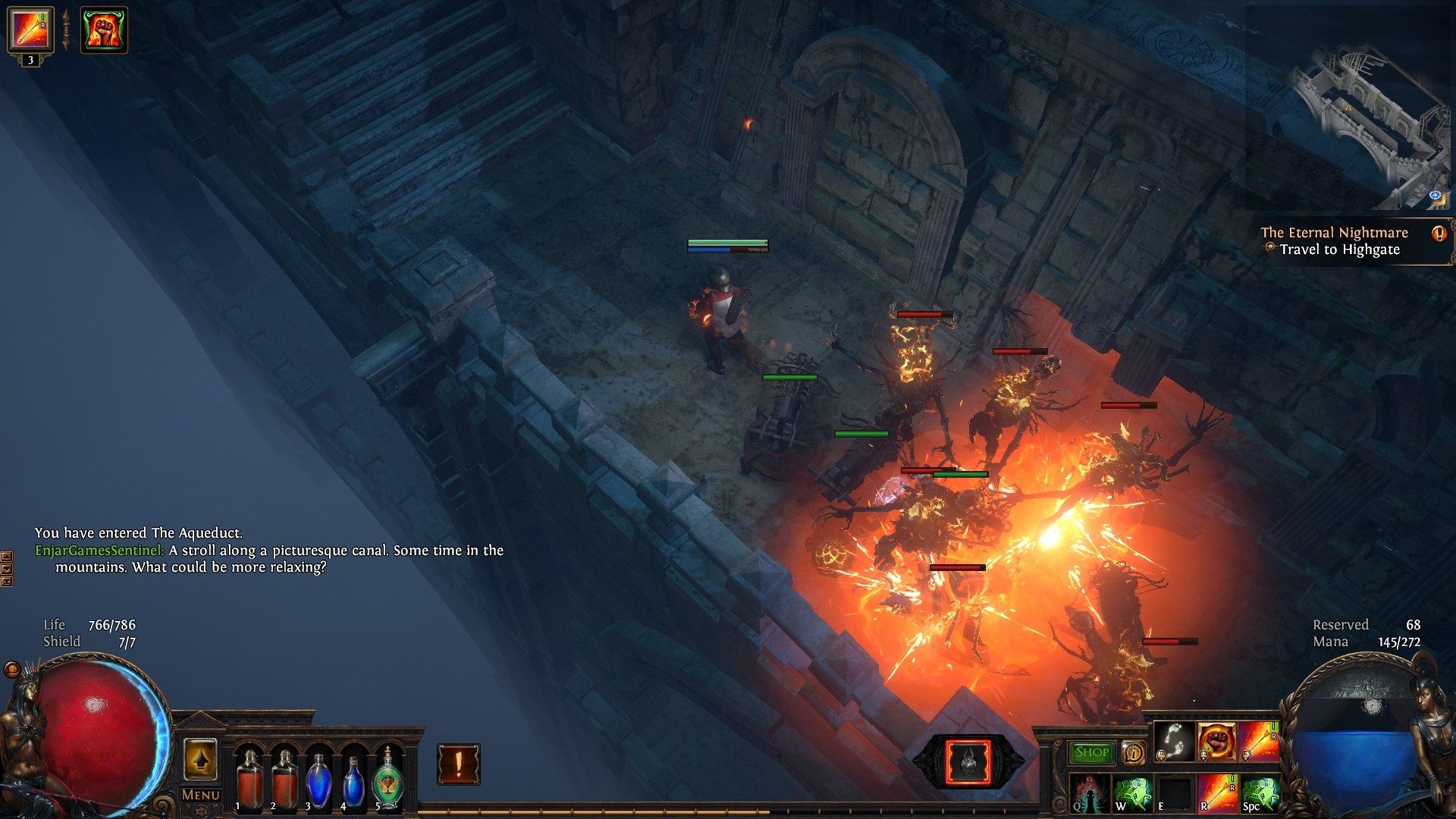 You enter into act IV through an aqueduct system. The best part is unlike act III you can just run to the next town without stopping. That however would be a perfectly good waste of experience. I however don’t have to stop long to kill things.

One thing I neglected to mention about act III is I made the skill switch over from using Shattering Steel to Explosive Arrow with Ballista Totems. The best and worst part about totems is you get to place them down and as long as they don’t get killed they deal damage.

The fire arrow part means they are shooting arrows into targets. There then is a short pause before all the fuses of those fire arrows go off. BOOM --hopefully dead thing on the ground. Then, loot for me to be had all over the place like blood in a crime scene. I gained a nice chunk of experience after the whole ordeal is over as well.

The Dried Lake is hands down my favorite stopping point while grinding out the storyline in Path of Exile. You can go in a giant circle around the zone and end right back at the starting point. This takes you back into the town. From there you can open a new instance and go back to re-clear the Dried Lake.

Every time you level up you can go check all the vendors in town to see if anything has changed. This can be gear for finding a base item that you then can try and craft up by rolling modifiers or taking it over to the crafting bench in your hideout.

You also start getting to a point in this game where the crafting bench has a few options on it. You can start to add a lot of the basics like life or resistance or primary stats. Most players choose to loot normal items and not upgrade them to magic rarity.

It is cheaper to craft a modifier onto them. Since my main focus is socket colors for my gems I don’t need to worry about crafting resistance onto my gear for now. I have a few passive skill points that I’ll later be removing that are giving me a decent amount of resistance.

You get to a point where you have some choices of what to do first. This is why I love this act and it’s so much better. While yes you end up having to take both paths you at least get to choose where to go first. I did a quick check to see how my first resistance was doing. Since I had a decent amount I opted to go through Kaom’s Dream and connected zone first. It is a fiery hellscape of death and bloom if you have bad fire resistance.

Since you are running along a lot of cliffs and tight spaces having a build that dropped totems made quick work of most of the monsters in those zones. I managed to not get killed a single time which for me is quite good since I’ve had some bad times in this place in the past. 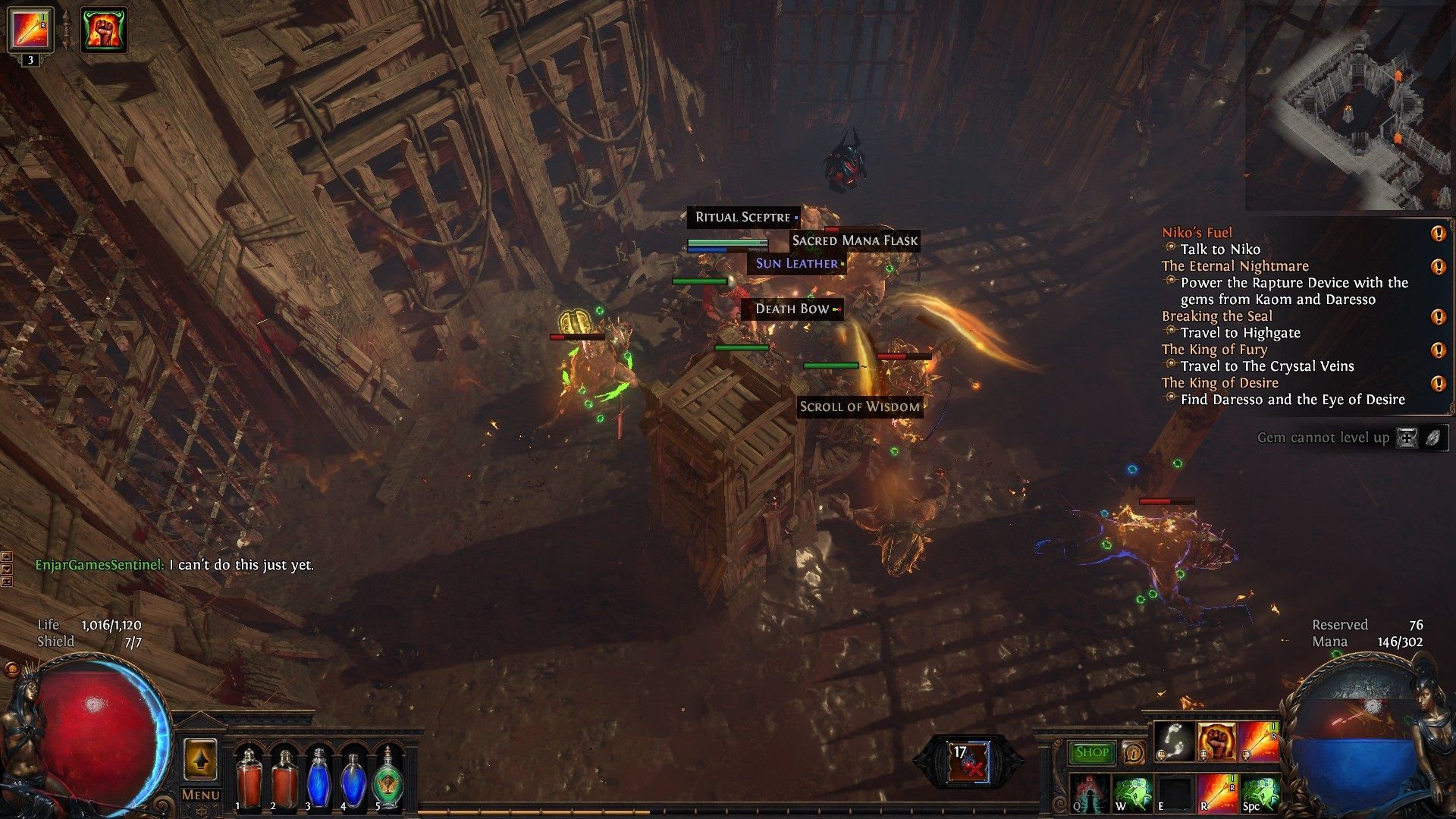 Once that was over I went to the other side of Daresso’s Dream and connected zone. It has a more arena and you are trapped in the area forced to do fights kind of feeling. Thankfully many of those fights can be skipped over if you choose.

Many of those spaces did make an excellent spot to activate my sentinel. This is also where I started to notice some Chaos Orbs being dropped on rare occasions. I am kind of shocked at how many I ended up getting along my journey through the main storyline. Usually, if I get just one I’m quite happy.

The ultimate luck and dream are however getting an Exalt drop this early into the league. With an Exalt this early you can get some items cheaper than you can later when people can afford to pay more. Sadly I did not get any but one can always dream. It has happened in past leagues. Remaining of the act, you have just some nasty-looking zones to crawl through for the most part. Fleshy walls with eyeballs looking at you like you did something wrong. Oozing and the sights of guts. I’m thankful I cannot smell these places.

After that, you end up in a zone where you get a few choices of which organs to collect first from three different mini-boss fights. The mistake I’ve made in the past is turning them in one at a time. If for whatever reason you have to leave the zone and it resets you lose the progress you made. From there it’s off to the act's boss fight. It has two very different stages to the fight. In the first stage, you are fighting Malachai and Piety depending on which one is activated at the time. In the second stage, you jump down through a hole that opens and I try not to think what body part that would be.

Finally, you fight Malachai again to get him to a certain health percentage. After that one of three hearts becomes damageable and you need to destroy them. Slowly over time hopefully avoiding Malachai’s nasty frontal area of effect you end up killing him.

I was a bit lazy during this fight and got killed twice. Thankfully I’m not playing on hardcore. If I was I would have spent some time grinding levels in the zone before this area. Although it’s not a great place to grind and you often have to reset the instance for more monsters. At some point, I hope we get some alternative paths to go through the storyline and into running maps in Path of Exile. While many say Path of Exile is what they wish Diablo III was like. There are moments where Diablo III felt the player no longer needed to suffer by running through the entire storyline again and again. Perhaps next year Path of Exile will roll out a more fun way to go about things.