One of the nice benefits of not trying to go as quickly as possible is messing around with Sentinels further. It did not take me long to realize I gained controller points by killing monsters that became empowered when I used my sentinel. As I would gain experience when I killed affected monsters. 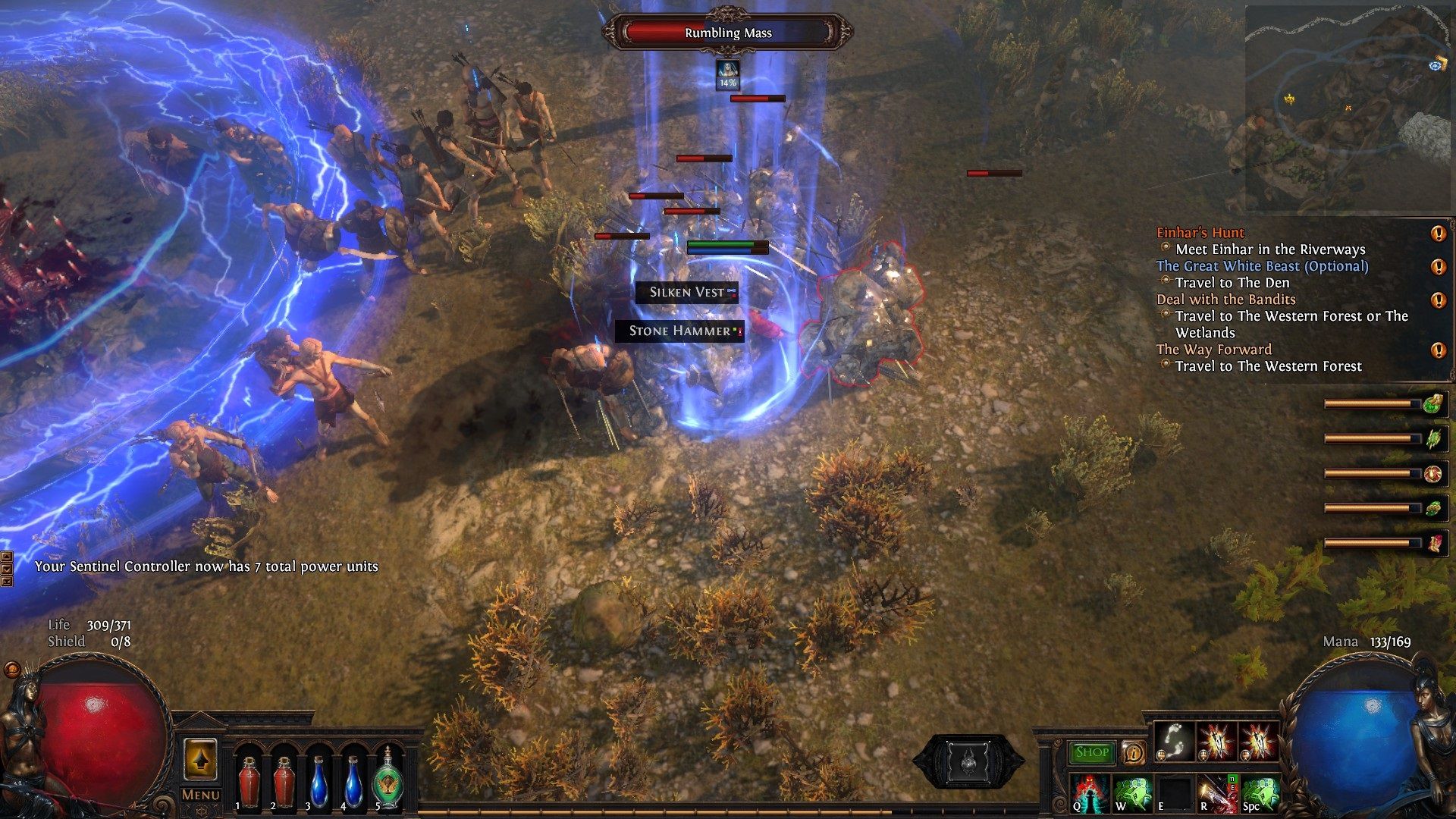 This early on I’m happy with it that way for this league. In past leagues, you could skip over whatever the new league mechanic was for the most part and not feel like you were missing out. While there were some exceptions a lot of the time it was not worth being slowed down to run them.

While I did not use my sentinel in every zone I made it a habit of doing so if I had one. There were a couple of times when I would burn one out and did not have a replacement. While I still am under the assumption that there is a cache in every zone. Since I’m not fully clearing a zone the chance of me running into it seems less than favorable. 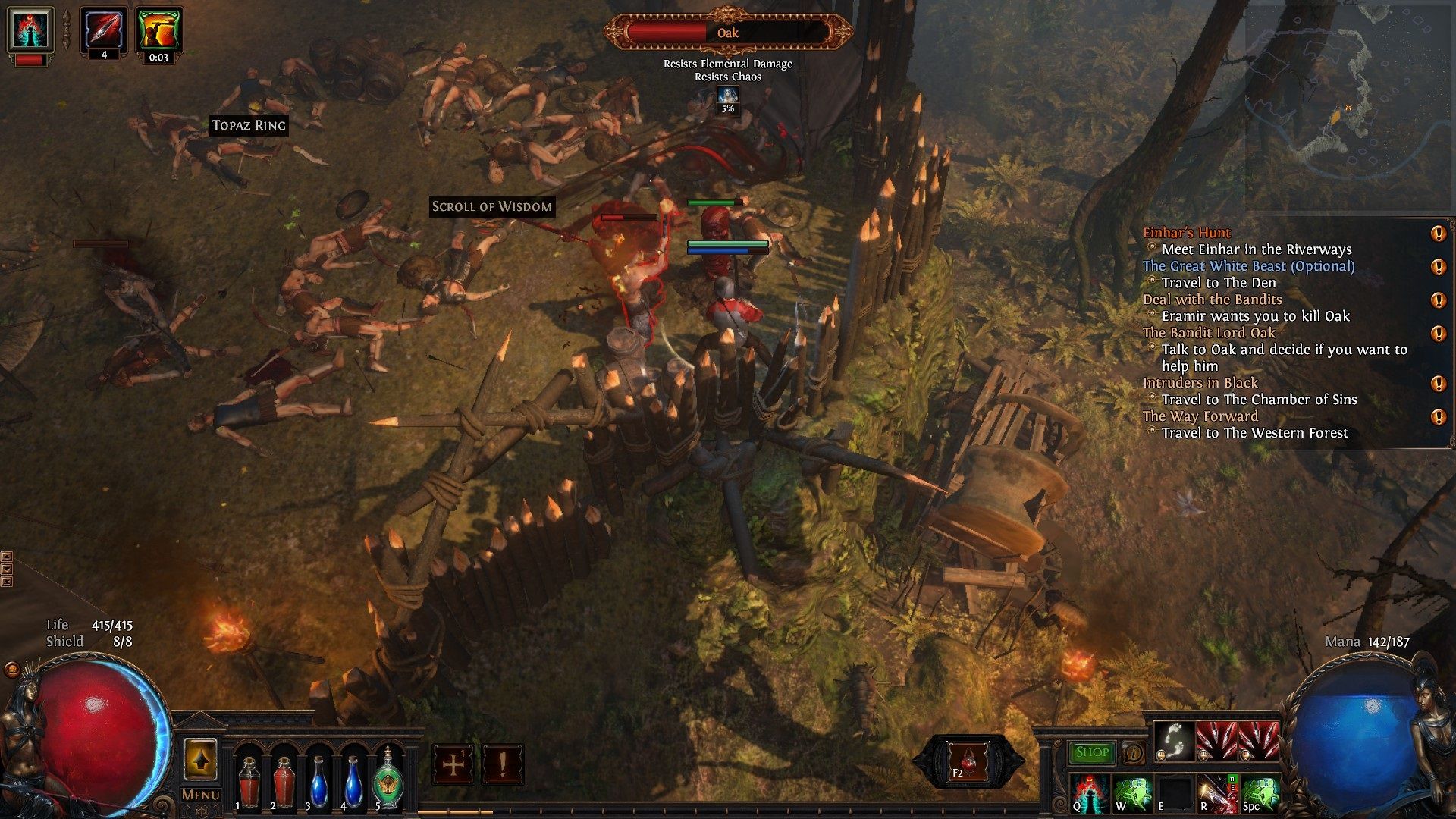 The next thing I had to do was work on my bandit quest. It seems I’m always just killing all three for the two passive skill points. In the past when I struggled more with getting to the resistance cap I would have gone a different route with this quest for the increased resistance reward. 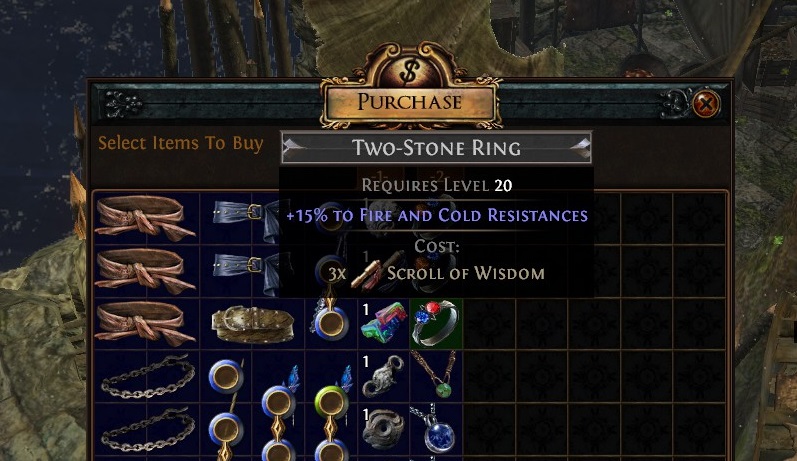 One thing I’m always on the hunt for in act II and beyond while leveling up is two-stone rings. They have two resistance and if you can land life or further resistances they can make leveling up a lot easier. While I had a couple of them drop I ended up liking the rings I had.

I even tried rolling for a better two-stone ring with some of the currencies I was looking for. However, this early on into the league my currency piles were quite small and I only had a couple of chances. It’s always a bit of a gamble and one that did not pay off this time around. While I was far from level 52 that is when I would prefer to switch over from using a leather belt to using a Dyadian Dawn Heavy Belt. While I would not benefit from it even if I could wear it now many players want it for ignites faster damage as it has quite the impact on kill speed and damage.

A belt with a modifier like that, later on, could account for almost 30% of my total damaged. As such, I kept an eye on the market to see if I could snipe any of them from other players for cheap once people started to get them to drop.

The Dyadian Dawn Heavy Belt would later quickly become over 40 Chaos and beyond anything, I would expect to afford for some time. While the downside of not trying to rush to higher levels where I could be making a lot more currencies for buying items and getting them before the prices spike high.

If I end up going slow enough even items like that might drop a huge amount over the next few days as the market becomes flooded with that the price could do down. There will also be a point where players are looking to make their second character and will be dumping their league starter build gear on the cheap.

Sometimes I think the slower leveling players have a better time when they are not trying to out pay everything else for an item. I can recall in past leagues I’d pay double the price for an item than it would be a week later. There are multiple points where you can try and time the market to get what you want. 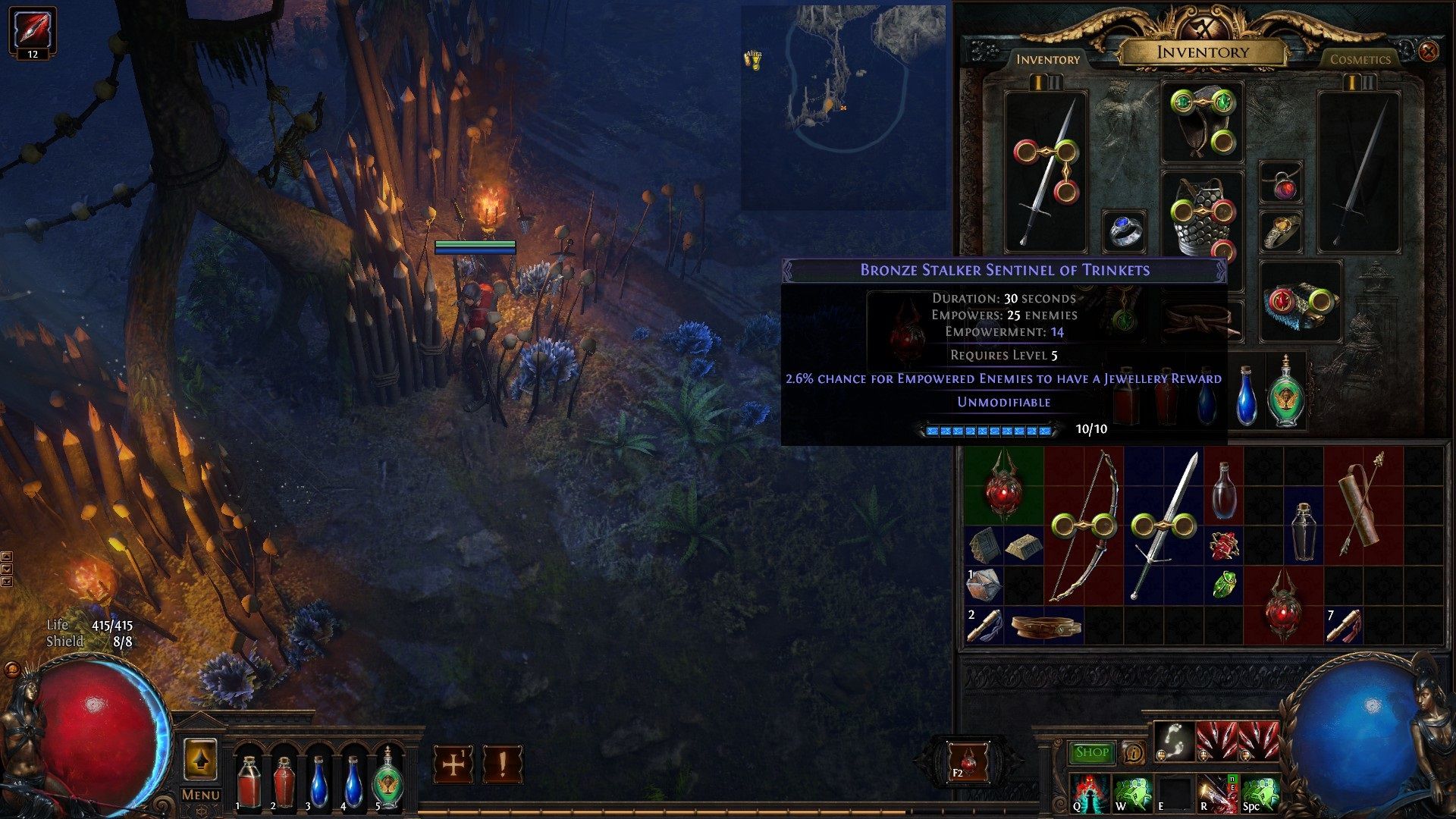 As I’m slowly leveling up I’m checking out what kind of Sentinel and other drops I’m getting are. You might notice despite the fact I’m currently using a two-handed sword for Splitting Steel and later Shattering Steel as my main skills. I am also picking up a bow and quiver.

One thing I am constantly thinking about is setting myself up for a major switch in skills being used. It’s quite rare when leveling a character to first start with the main skill you will be using mid to late game. This is more often the case that you are not high even level to use those skills and you don’t have any special gear to take those skills to their peak to make it worthwhile using them.

At some point, I’ll be switching over to using a bow. The crazy thing about the explosive arrow build is you don’t care about weapon damage. It is all about attack speed till much later in the game. If I can find a high-speed bow with a speed modifier on it I’d be set till at least I make it into running maps.

Since I’m not quite at that stage yet weapon damage is a huge deal. So any two-handed swords or axes I see drop I’ll be looting them just to check the damage. I’ll also be checking vendors for the weapons I currently need and the ones I’m looking to transition over into later on as well. Act II always feels like it drags on forever. If you miss picking up a waypoint you will end up having to backtrack for it later. As you will pass some zones that you won’t be entering just yet. I’ve always had a strange pattern that I run act II in.

While it works for me I’m more or less fighting some of the higher zones first before circling back to some of the lower ones. Then I get the next round of quests that take me into a more normal zone level on par with my character level approach.

Act II is just one of those places where you don’t feel like there is only one route you can take to finish everything on. You get some early choices on where to go first. You do evenly get down to a funnel point where no matter what choices you made you are converging on a certain point.

Part of the fun and annoyance of a fresh league is being starved for currency. On top of all the items, I want to be rolling. There is a certain instance where a skill gem I want to be leveling up will become available for purchase off the vendor. Yet, I’m just too broke to buy it let alone multiple copies of it to be leveling up on my second setup of weapons you can carry that gain gem experience.

It can be really easy to not have the currency to buy a skill gem you could use now or have a need in say twenty levels. For you than to not get it till you enter into maps in the map. I can say I’m always guilty of doing that myself.

You get to a point where you are happy enough with the gear you have found and the skill gems you are using that you just want to keep pushing forward. It is always best to take a short break and look over what you have and what you should be keeping an eye out for. After picking up a few more sentinels and using them on packs of monsters. I’m slowly making my way to the end of act II. I’m still not sure how I feel about having to keep replacing the sentinel. At least higher rarity ones have more than eight uses. I will however be saving those for high zones for now I want to use up all the lower ones.

While I’m usually quite good at remembering to take a screenshot of the boss fight at the end of each act. This time around the thought escaped my mind. It was quite an uneventful fight. I had decent resistances and armor going into it.

While I wish I had a bit more damage. Without much of a struggle, the boss went down without me getting killed. The loot that dropped did not have anything useful I wanted so I quickly moved on and into act III. I am trailing behind quite a lot of people at this point. I’m still not sure what long-term use if any I’ll be using Sentinels for. Outside of them getting me killed a few times when using them. I just don’t feel that excitement as I have in past leagues when encountering the league mechanic.