It was time to finish up the first half of the storyline. Then the game sends you back to see the consequences and havoc you caused by murdering so many things in the game. If only you had a pacifist option but nope. Here is to more murder and mayhem.

I’m now in Act 5. Here and forward is where I start to skip a lot of things for now. I have also skipped over running my labs for now. Till I can pick up Fortitude they are a bit worthless anyways. I’d rather just run a couple of them back to back. 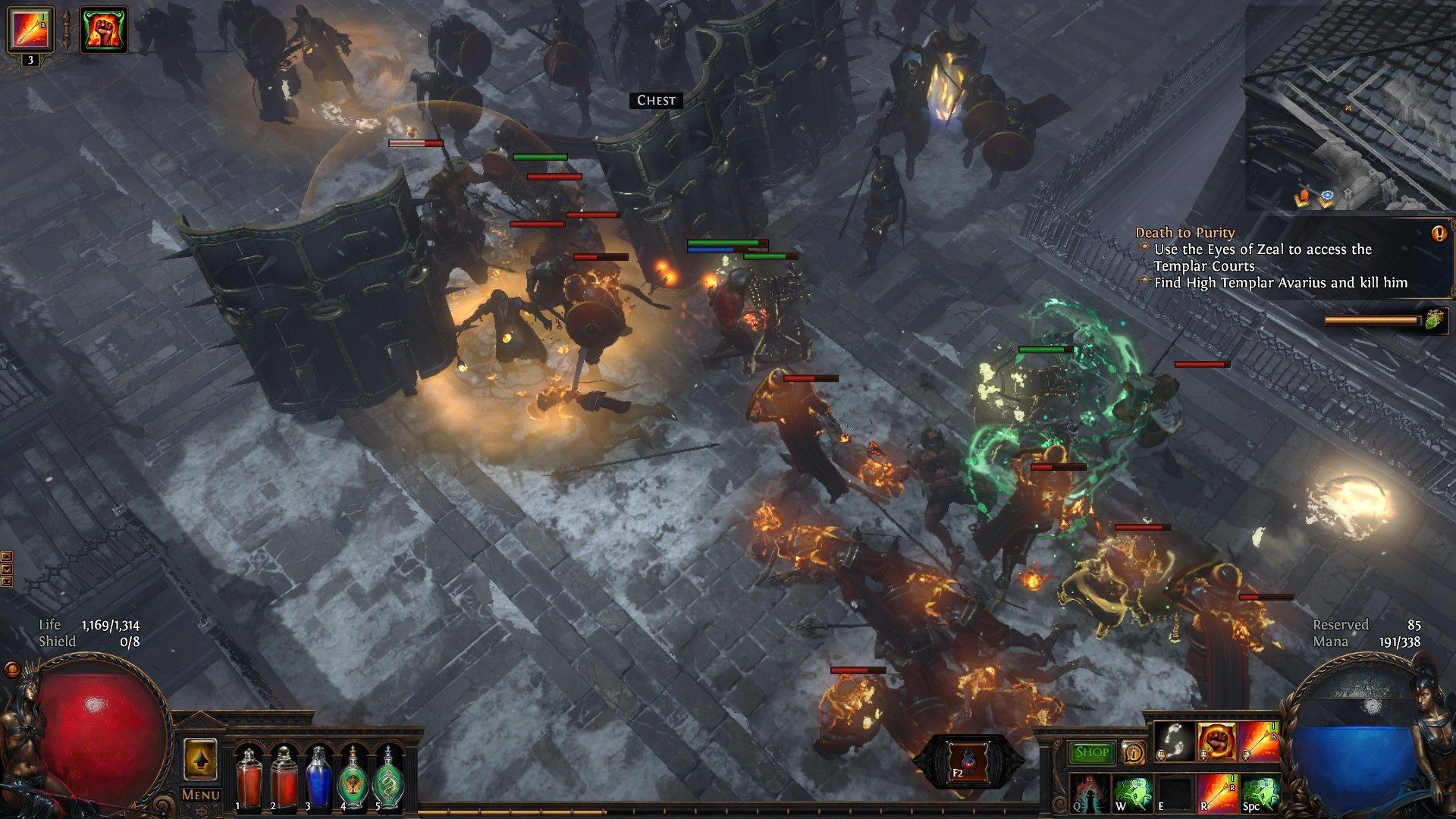 The Square in act 5 is quite a busy place. It can be easy to overstay how long you need in here. Even if I was way leveled this is not a place I would stop. Instead, I went straight for the courts. This zone in my eyes is perfect if you need a spot to grind it out for a while. It has decent monster density. If you are getting killed in here it is also a sign that you should be focused on getting a few levels and look for some better gear.

Since I was not having any issues here I quickly cleared through it. The next part was a bit tough. The smart play would have been to gain a few levels and try to update my weapon. However, since my build is focused on attack speed for the bow and a bow with higher damage on it would not help very little. There was no point in doing so. Instead, I had to endure quite a long battle with the High Templar Avarius. Thankfully I can just drop my totems and focused on not taking damage from the adds he activities along with all the abilities he has. The later version of this once I have to go through all the acts again will be much harder. 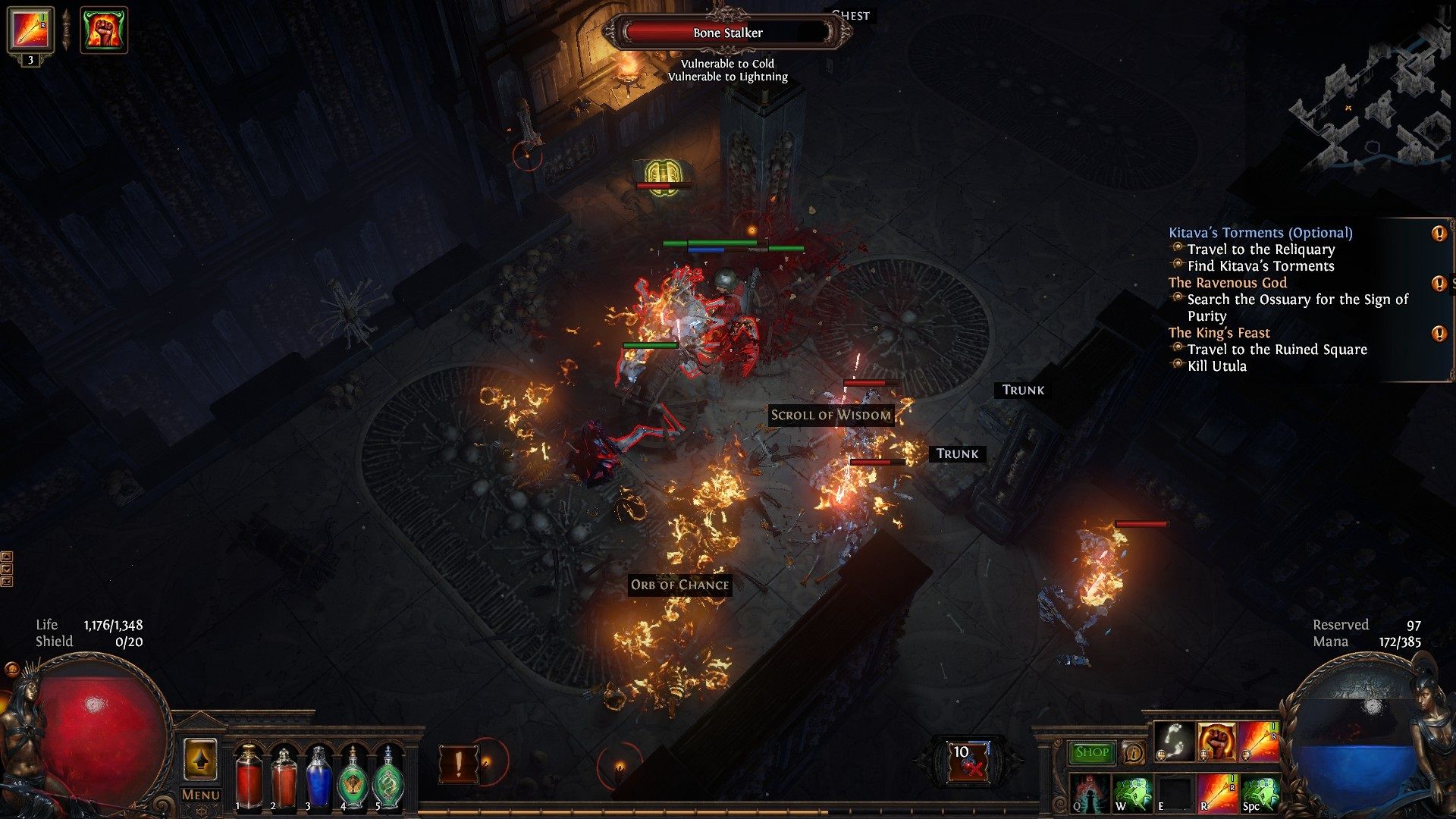 After that, I made a mad dash through the torched courts. The game requires you to backtrack through an old zone that has now been changed by you killing High Templar Avarius. This is also when the game starts to slowly show you the actions you were forced to do as a player have consequences on the world. Foreshadowing what is about to come.

I have been keeping up using my Sentinels the best I can. I have noticed I have been getting quite a few currency rewards. While nothing major I welcome getting more orbs of chance as I’ll be needing a lot of them early on.

One thing I have been doing when I get a few and have leveled up is head over to the Heist main zone and buy contracts off the vender. While they are low level it tends to be one of the better places I can grind for some currencies. While I’m still working on getting some gear and further levels.

This time around I did not get as many as I thought I would. At one point I considered converting the Chaos Orbs I have been looting into orbs of chance. I however was not quite happy with the trade rate. I am hoping by the time I make it into maps I can bulk buy quite a few at once.

If nothing else I should get some out of the Heist contracts I have been picking up. It was tempting to run some and take a break from the storyline. I wanted to get the storyline over with and still had a fair amount to go. 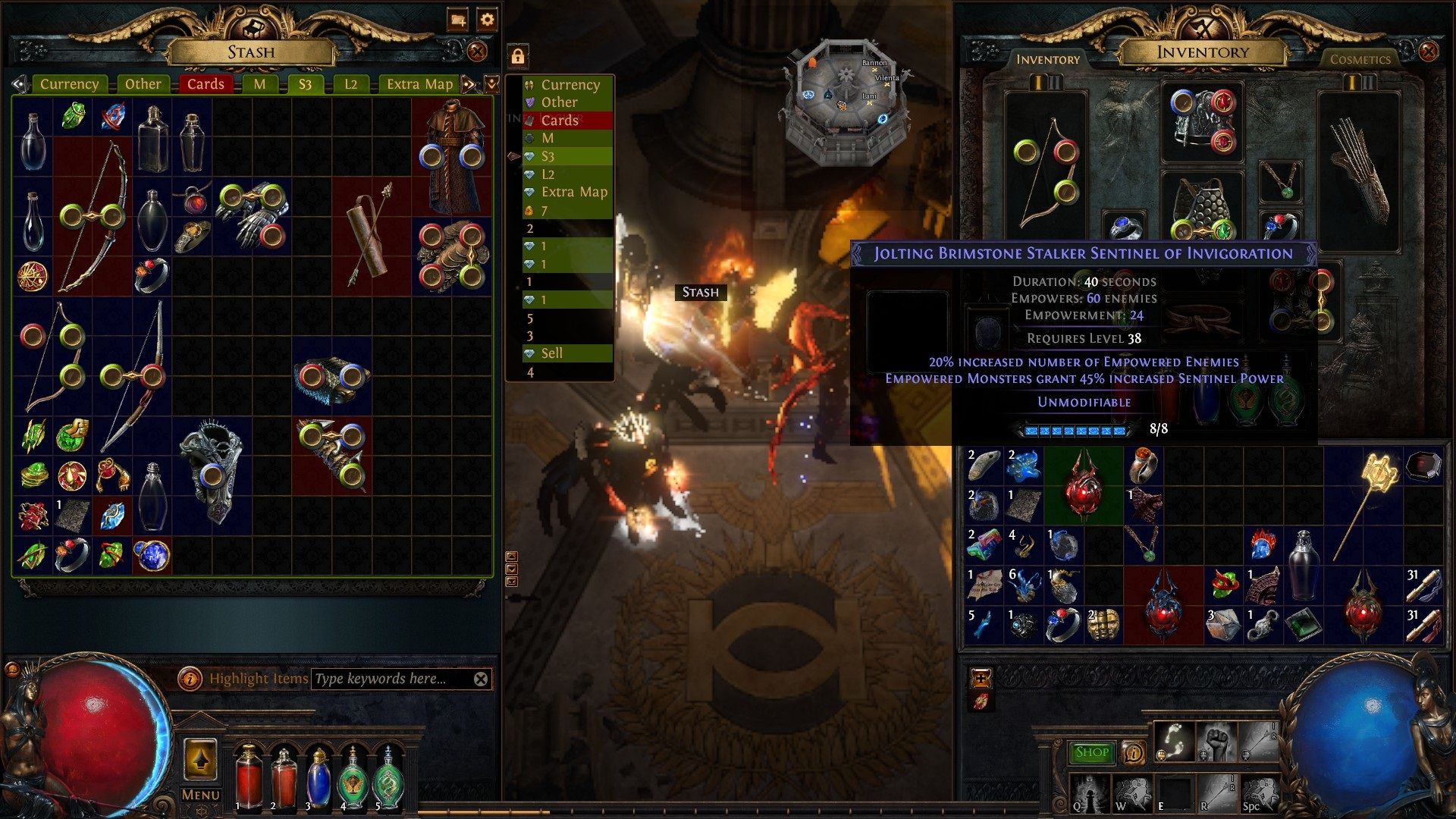 Since I have quite a little storage space I usually just dump anything I have picked up into there once I’m not using it anymore. It would be one thing if I noticed I got a drop that I know would be worth a fair amount this early on.

Most of the stuff I got even the unique ones are quite common. I’ll just put them all up for sale at once when I need some starting currencies like Orbs of Alchemy for rolling maps and Heist contracts later on. For now, I don’t want to be stopped every few minutes and have to run to my hideout to make a trade while still working on the storyline. So those items can wait for later. One thing I don’t usually skip over running is when I find a Vaal side area to run. While these days most of the Vaal corrupted gems are worthwhile since everyone knows how to get them. I always have a small hope of finding a Tabula Rasa. As it would have its luck was not on my side.

Since Vaal side areas have increased modifiers making them harder to run it was quite an interesting experience using my sentential inside. Thankfully with totems I could get dame down and go and hide till I needed to replace them. They seem like quite nasty encounters once the Sentinel made them harder. 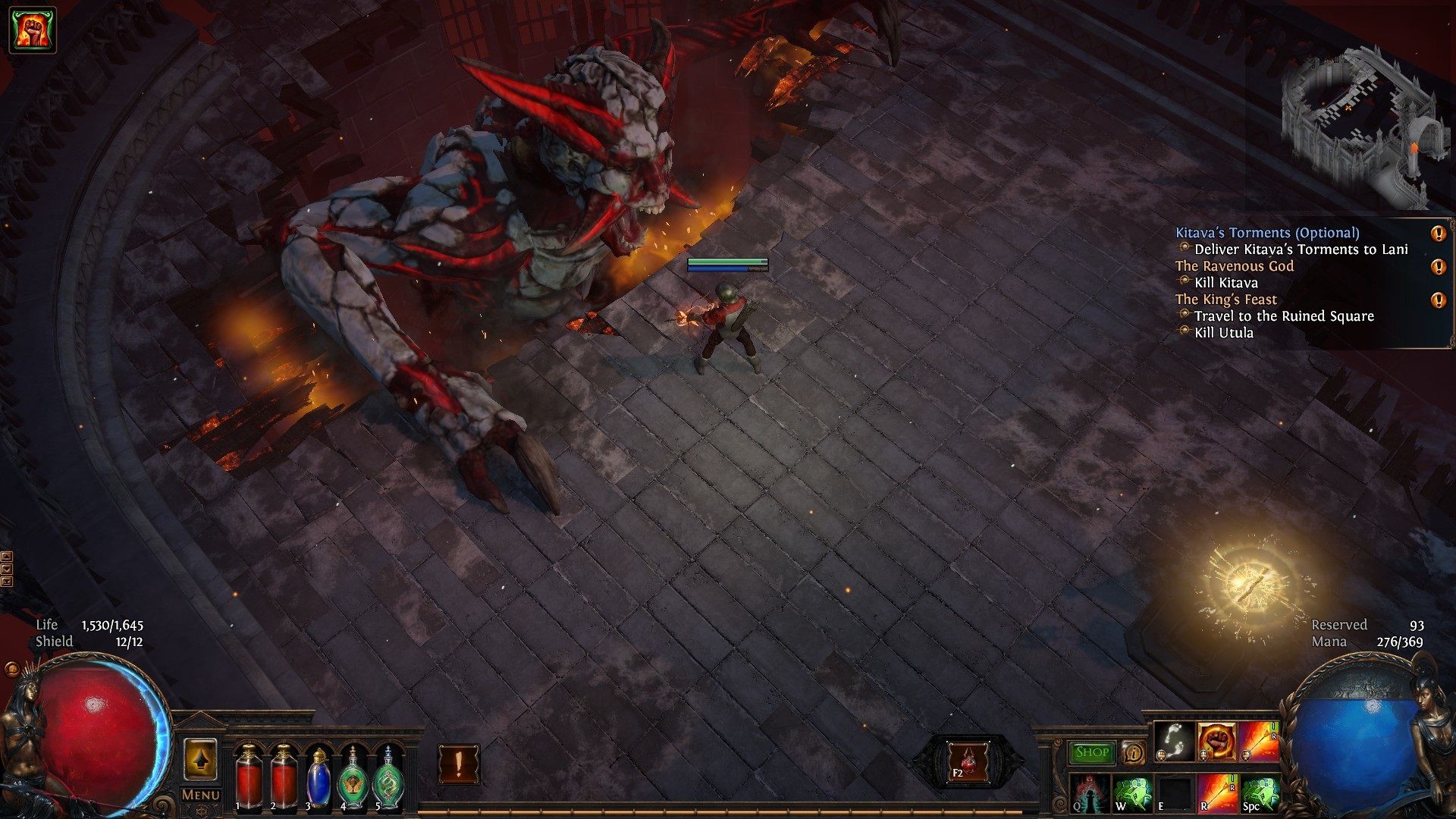 Not long after that, it was time to finish off Act 5 by killing Kitava. Since you take a permanent negative resistance penalty once you kill it to move forward in the game. It is always a smart idea to finish up anything you need to. It will be harder to do so for the next few levels afterwords.

Since I did not have any plans to return to do the stuff I skip over till being a much higher level it would not have much of an impact on me. By then I’ll have decent enough resistance to make up for it. This early on negative resistance can be something you struggle with if you did not know about it ahead of time.

Once the fight was over it was time to go on to act 6. This just acts 1 but changes into a darker and more sinister reality with a lot harder monsters to fight. If you lack fire resistance you will have a bad time as it can be a brutal area to not have enough. 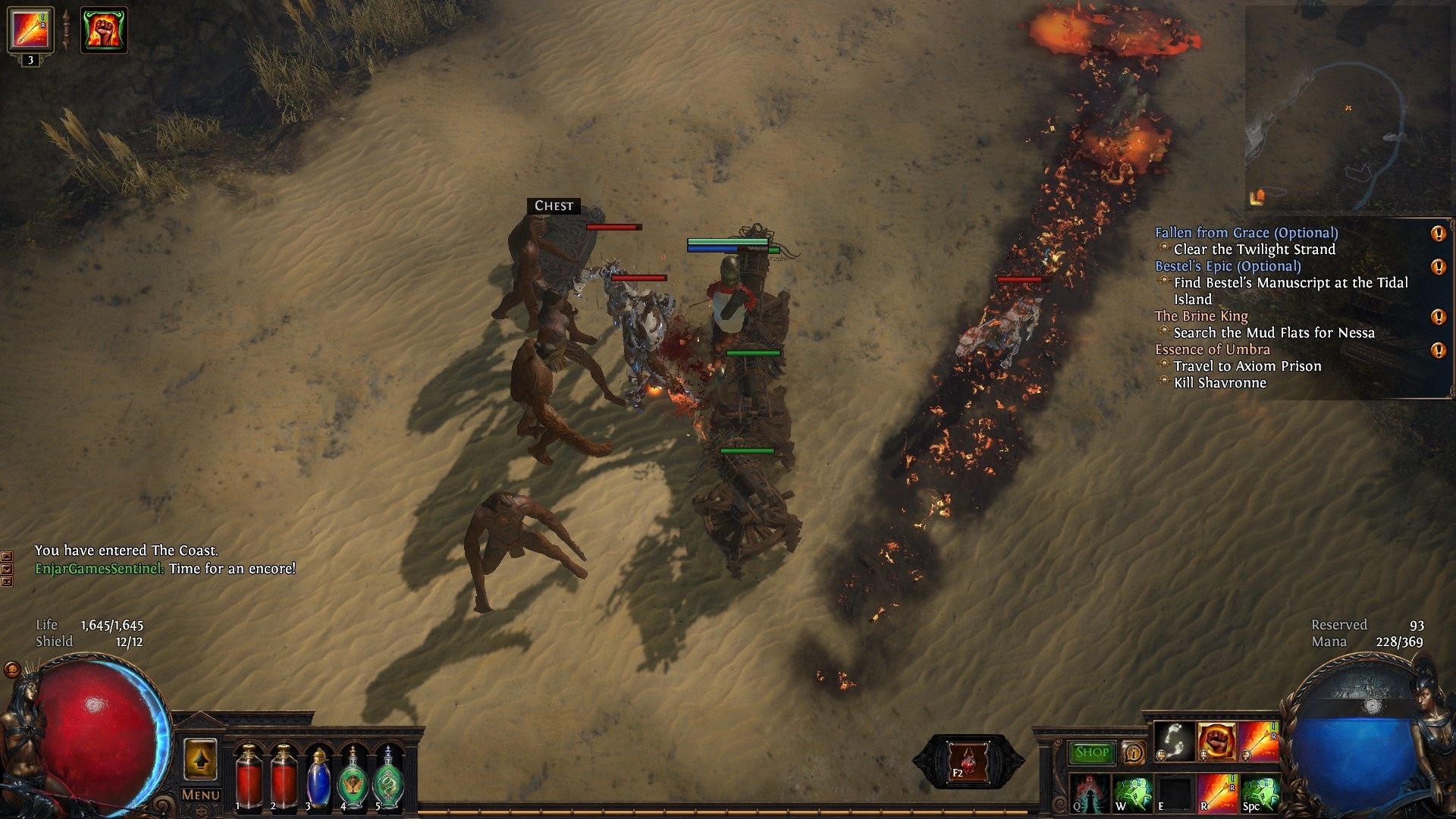 While I did not have the best first resistance ever it was more than enough to clear through act 6. This is also part of the game where you start slaying gods for their Pantheon perks. If they were on my way to the next zone or requirements to take out I did. If I did not run into them then I skipped over them for now for the most part. 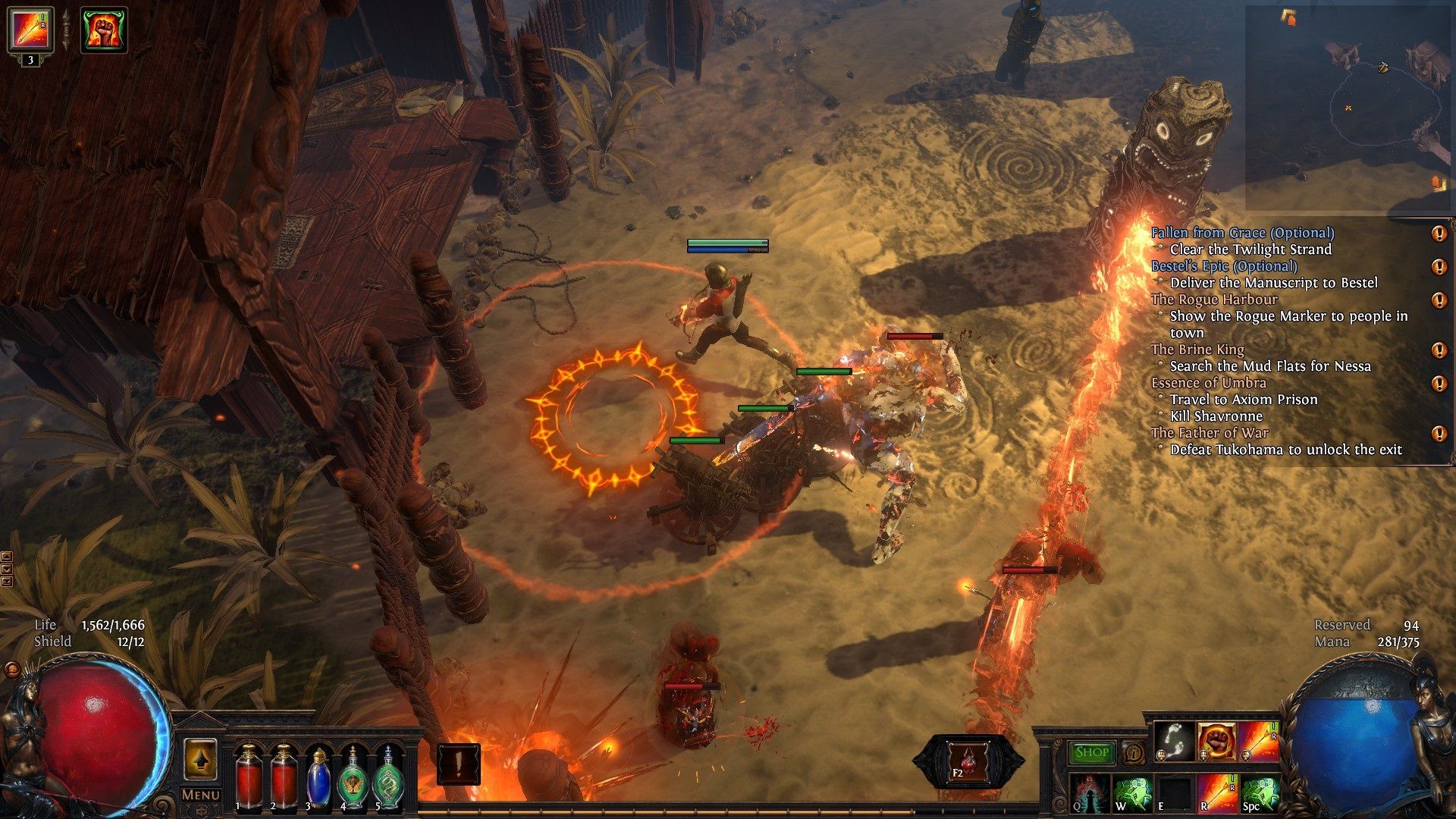 I’ll, later on, come back at a much higher level and flatten a lot of what I end up skipping over. It will just be quicker. When I get this far into the game I no longer want to wait to get into running maps. I just wish I was already there. It however would still be a little while before I get there on this journey.