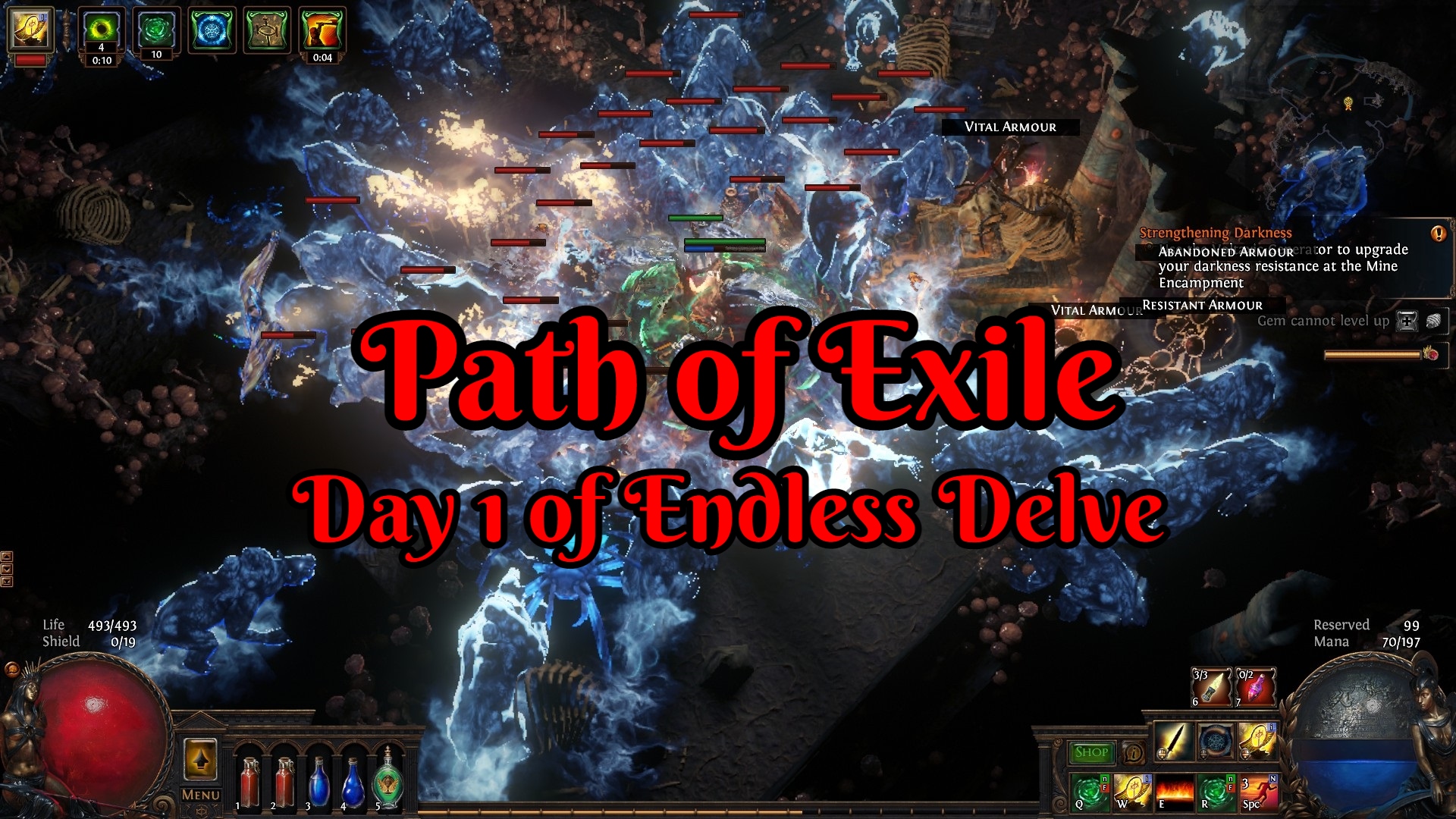 I thought I was done with Path of Exile and then they whispered in my ear about a week-long Endless Delve Event. Out of all the leagues I’ve played over the years Delve ended up being my favorite. While I still am looking forward to Path of Exile 2 and don’t plan to make this a regular return to the game-- I will for Delve!

One of the things that I got tired of over the years regarding Path of Exile was playing the regular game up until you unlock maps. I’ve done that many dozens if not a hundred times. You have to do that for every character in every league. It just gets boring. Outside of just a couple of leagues, I enjoyed like Delve, running maps was what I looked forward to when I did play.

Endless Delve event is a bit different than even most events out there and that is why I could not resist returning. While other events are going on this month and many long term players of Path of Exile would argue they are better I was not interested in playing any of them except for Delve.

The developers of Path of Exile have isolated Delve from the rest of the game and that is the only available part. No having to run through the base game to get to it. No having to farm endlessly about for Sulphur just to run a node in Delve. Heck, you don’t even get a crafting bench!

Delve itself is not the easiest thing to start for many who play the game so there were some modifications made. For starters, they lowered the difficulty at the start to give players the chance to acquire gear. They also have each class start with a couple of unique items to get them going. Along with a few other changes brought up in their FAQ for this event. While it’s a busy week and I won’t have time to play daily I’m at least going to enjoy the event. Day one has now finished and I made decent progress for what time I had. So far I have loved it and can’t wait to jump back in.

With this being Delve I knew I needed a bit more of a tanky class if I wanted to get far in it. I also know with it being solo self-found that the luck of what drops is going to be a main driving factor in how you end up playing.

I decided to go with a Marauder that will be using blade vortex. I love using blade vortex and felt with how dense many of the nodes you end up fighting can be that this would be a great fit. I’m also being a bit lazy and downloaded a few different builds off the Marauder forum more as a guideline of passive sill tree to follow than anything else. Trying to get special gear to make any particular build will be hard and might not even be an option to acquire in Delve.

While marauder will be my main class to start with that is not the one I started the event on. I took a look at several items the other classes were getting and it turned out the shadow was starting with at least one item I wanted.

Unlike a normal league start with an event, there is no waiting in a long queue to just join the game since their servers are already running. You in fact could register for the event an hour early and just have your character mostly frozen in game waiting for the final countdown to start.

You could do a couple of things while you waited. Like, assign passive skill points, place any items in your inventory on your character, and socket items. Along with creating several classes as well. You could be almost set up. While I’m not racing with the big players these small things get people into the mines even faster. Once the event went live I ran over to my shared storage stash on my shadow and dumped all the items he had in his inventory. I then switched over to my Marauder and picked everything up that I wanted to use.

Another quality of life change that Endless Delve included was putting Lilly Roth in the starting area-- Mine Encampment. She is loaded with all standard skill gems in the game at the lowest level they can be. Without there being any restriction on only selling certain skill gems to the right class I was able to pick up what I wanted as my starting skills and make my way towards the mine.

While I was expecting to get murdered with just two unique items equipped on me for weapons going into the mine itself. It was quite easy. I’m glad they found a decent balance of difficulty so players could gear themselves up. 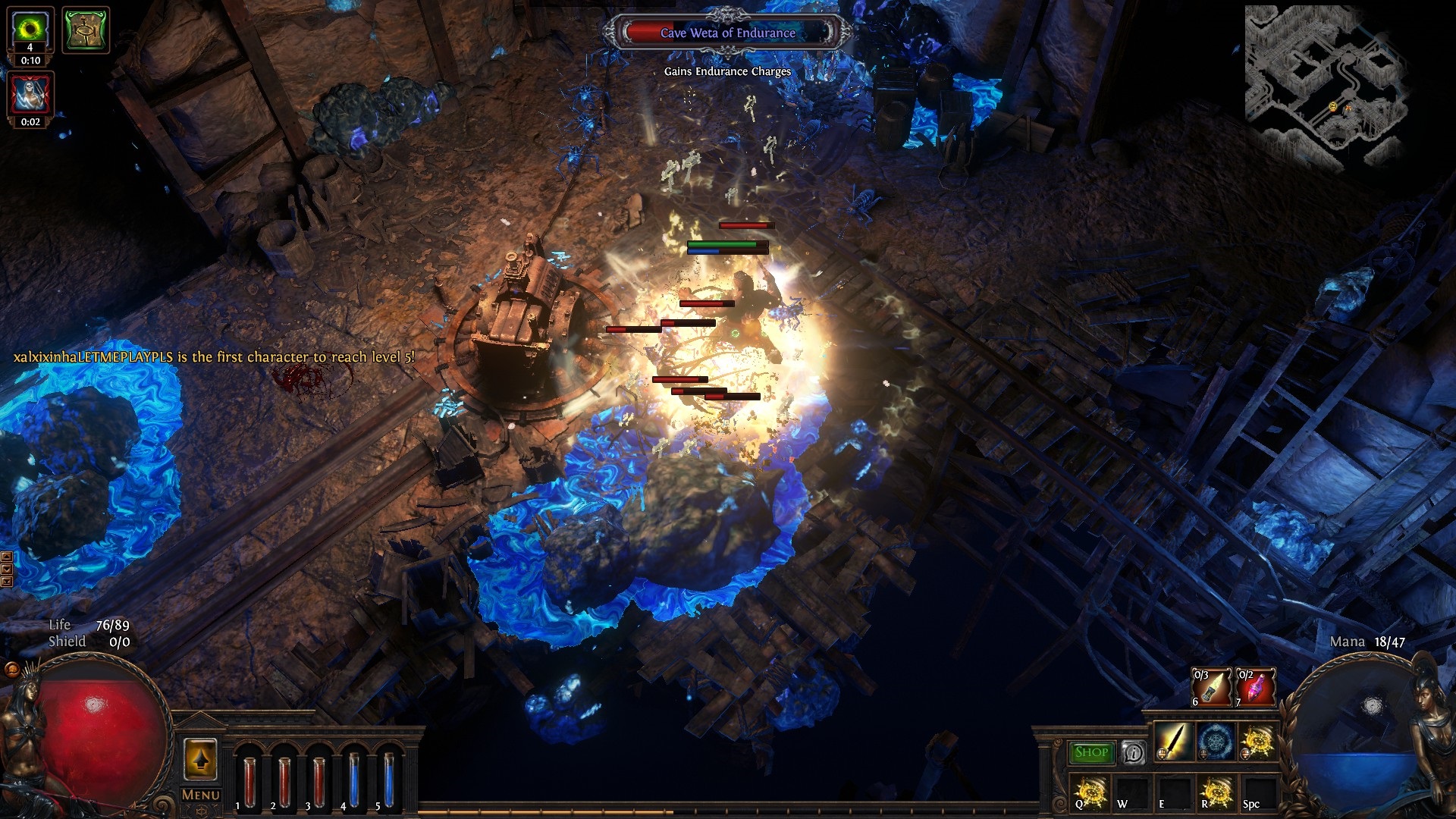 I planned to just go as deep as I could get into the mine until I died. Since I was not playing in hardcore mode I can afford to get killed. After that, the plan was to move sideways and only go deeper every so often for harder monsters that would yield better experience and possible items.

My first death did not happen for quite some time. I even reached my first ascendancy and picked Chieftain without so much of a bead of sweat. You did not even have to run the trails to unlock it either they just gave you the option to select what one you wanted. It was almost too easy that however would not go on forever.

Somewhere in my mid-level fourths, I was starting to struggle with the level 1 weapons I had started with. I lucked out and found a decent scepter but I still have my eyes open for something much better. I also found a shield with 12 all elemental resistance on it that helped a fair amount. Without a crafting bench filling in gaps for resistance or stats is perhaps the biggest thing I struggled with. Thankfully I managed to keep myself near max cap resistance for in my mid fourths and beyond so far. In part, due to a nice dent belt and some two-stone rings, I found while clearing deeper into the mine. At level 51 my first death had finally happened. It turned out I was rushing so deep into the mine I was seven levels below the level of monsters I was fighting. Some of my gear was also getting quite outdated at that point.

I made it to level 54 before calling it a night. I happened to found my first city and felt I would leave that for another day. 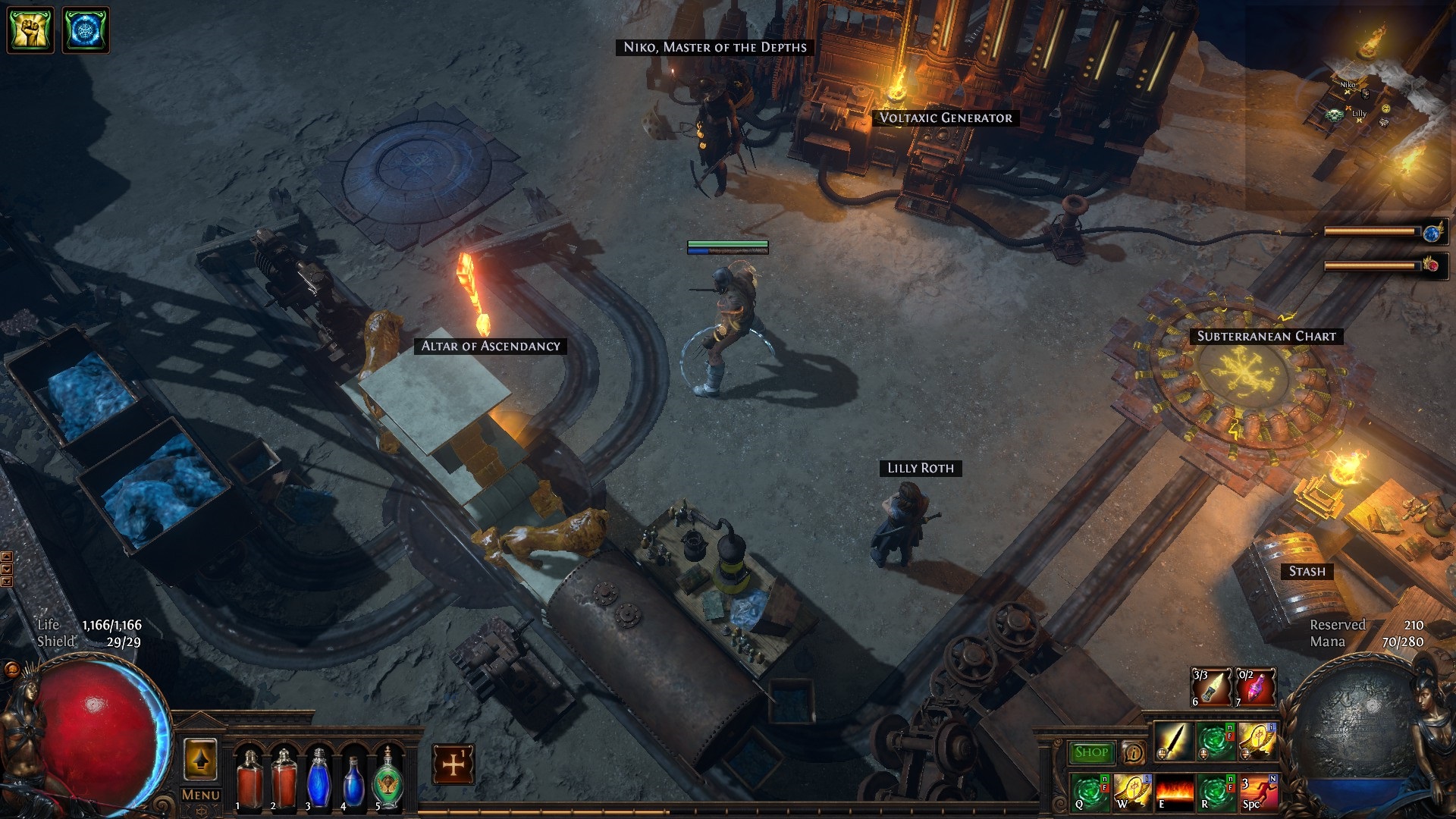 A great first day. Leveling is so much faster when you are not having to play the main game and can just run in the mines. I can’t wait to play more tonight!