The first 24 hours of the league were quite productive for me in terms of the progress made. I had a bit of a rough start but once things got going the Explosive Arrow Champion build I’m playing is quite the powerhouse. I however did take my sweet time getting there. At first, I was a bit lazy about getting into the queue. Between a 5 gig patch and the game needing to do some work on shaders once the game was loaded. I ended up landing in the 13k range for the queue. Thankfully that is not bad and not even five minutes after league start I was in. With just a tad bit of lag for the first hour or so.

I was not expecting to have a lot of deaths in the first act that however was not going to be the way things went. I decided to take a peek at the league mechanic and see if it would yield anything helpful for leveling up faster. There were also some unexpected changes.

It seems they have made the starting zones in the game a bit harder. Act 1 was always a bit of a struggle since you had next to nothing to get yourself out of a bind. Now the first several acts seem to be a bit unforgiving. That is at least how it felt. I still don’t know much about Archnemesis other than I like it so far. At the early levels, you could only do two petrified monsters in a zone. Later on, that expanded up to four spawnings some monsters I downright could not even deal damage to.

Since league mechanics tend to be a bit rippy at the start I always expected some deaths while seeing what it has. I had one instance I dragged the monster to a respawn point and died a good dozen times just to finish it off. I was in a revenge mood you can say the least.

One thing I like so far about it is the Archnemesis tokens are not limited to a single character of yours in the same league or even a single map. So you can farm up a bunch and cherry-pick what you want to run. This makes it quite better than other leagues in the past where such a thing would be limited to that zone. I quickly noticed one of the tokens gave you a unique item once you beat the event. After the first couple of zones if I used it first I could get myself three unique. With the other two slots just needing to be something that does not make the monster you have to fight near impossible to kill. While I did not get many things I was hoping to get. I did luck out and scored a Quill Rain bow which was all I needed.

As far as champion Explosive Arrow (EA) builds go it’s all about that attack speed up to a certain point. I had picked the bow up before I even made the switch over to EA which was nice. I ended up using this single bow the rest of the day. I was quite shocked at how long it has lasted so far.

In the first couple of acts, I was spending a lot of time running Archnemesis which did slow me down a bit. While I have not played around too much with working out different recipes you can create with the tokens. I have discovered some nice things such as drops rerolling twice with the best result being what you get. I can’t wait to spend time with the system doing more than just spamming currency and unique tokens for farming.

Once I started to use the Quill Rain I started to play more like how I will be with this totem build. I would drop my totems, move ahead, drop some more, and move again. While that did mean I was mostly staying at level with each zone and it took a little longer to progress. I wanted to make sure I could get into using a totem build as I’ve not played one in an actual manner for quite some time. I have to say every boss fight I loved doing during the campaign of the game. Everything went down easily without getting killed as I could just drop the totems and run around as needed without taking too many risks to get damage down.

The first real test for this build for me I thought would be in Act 4 where you do Kaom’s Dream. usually, I go down to The Dried Lake and farm a few levels and take the time to work on some gear to make that place a little more livable. 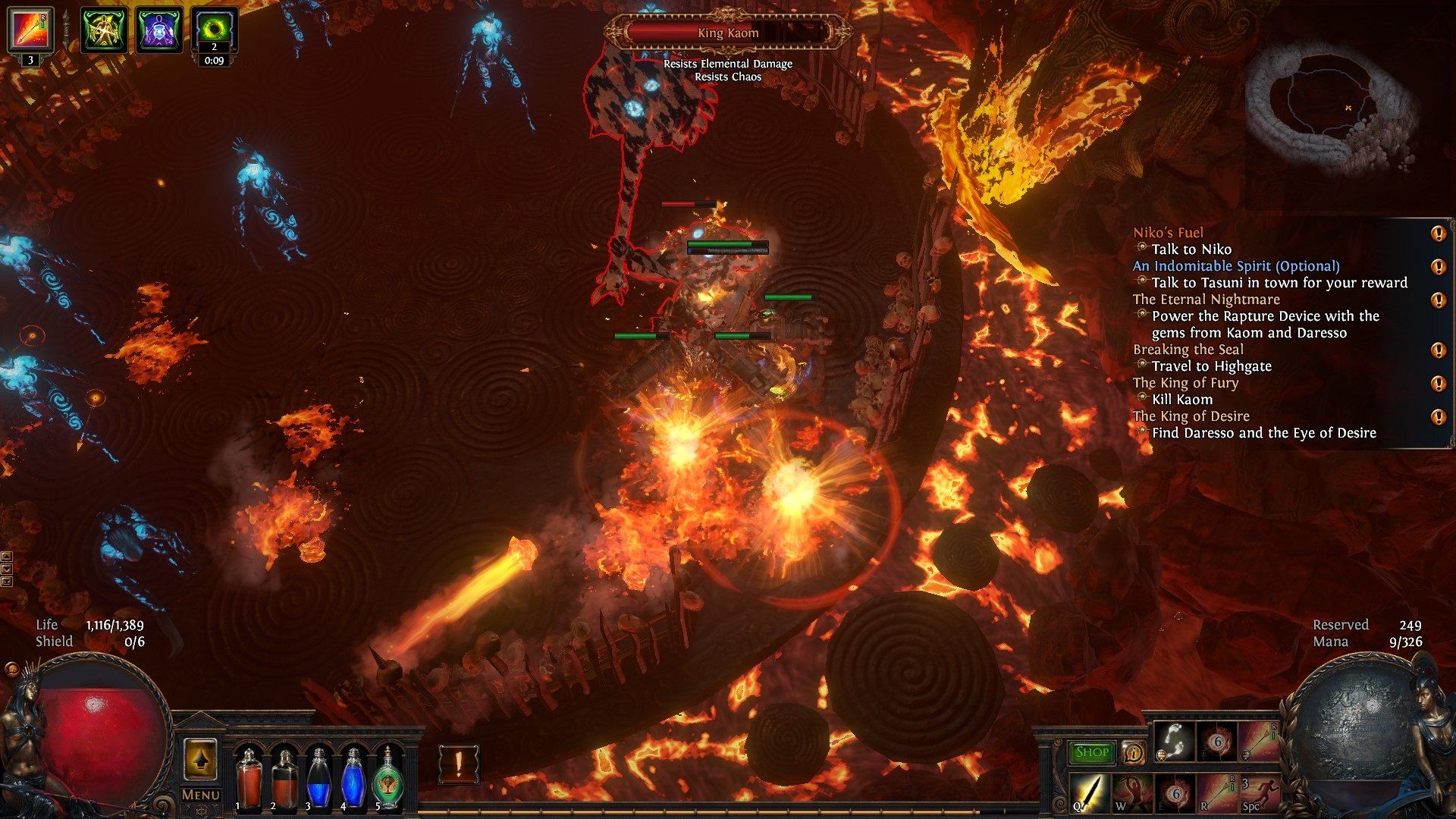 I did not need to do that this time around. I marched right in there killed everything even being one level low for King Kaom and killed him without a single death. It was almost too easy in fact. I knew at that moment I was going to love playing a totem build in this league.

While I arrived much later than I wanted into Act 5 I did so after taking a nice break. There was only one thing that was bugging me and that was a vendor recipe that I could not get to work at first. I wanted to have a Hyrri’s Bite Quiver it just however would not work. I would place a 1% quality Rain of Arrows gem, a rare onyx amulet, a normal sharktooth arrow quiver, and an orb of chance with a vendor and it kept showing me getting back junk if I took the trade. I even went out and looted all these items again just to see if there was something bugged.

Thankfully in the end out of frustration and looking online a few times just to make sure I was doing it right I noticed something. People were trading with an NPC in their hideout. Despite my many attempts and trading with a few different NPCs. It did not work till I traded with one of the NPCs in my hideout. What a strange thing to have happened then again it is Path Of Exile after all. For all, I know that is how vendor recipes have always been. I never do them outside of my hideout till today. 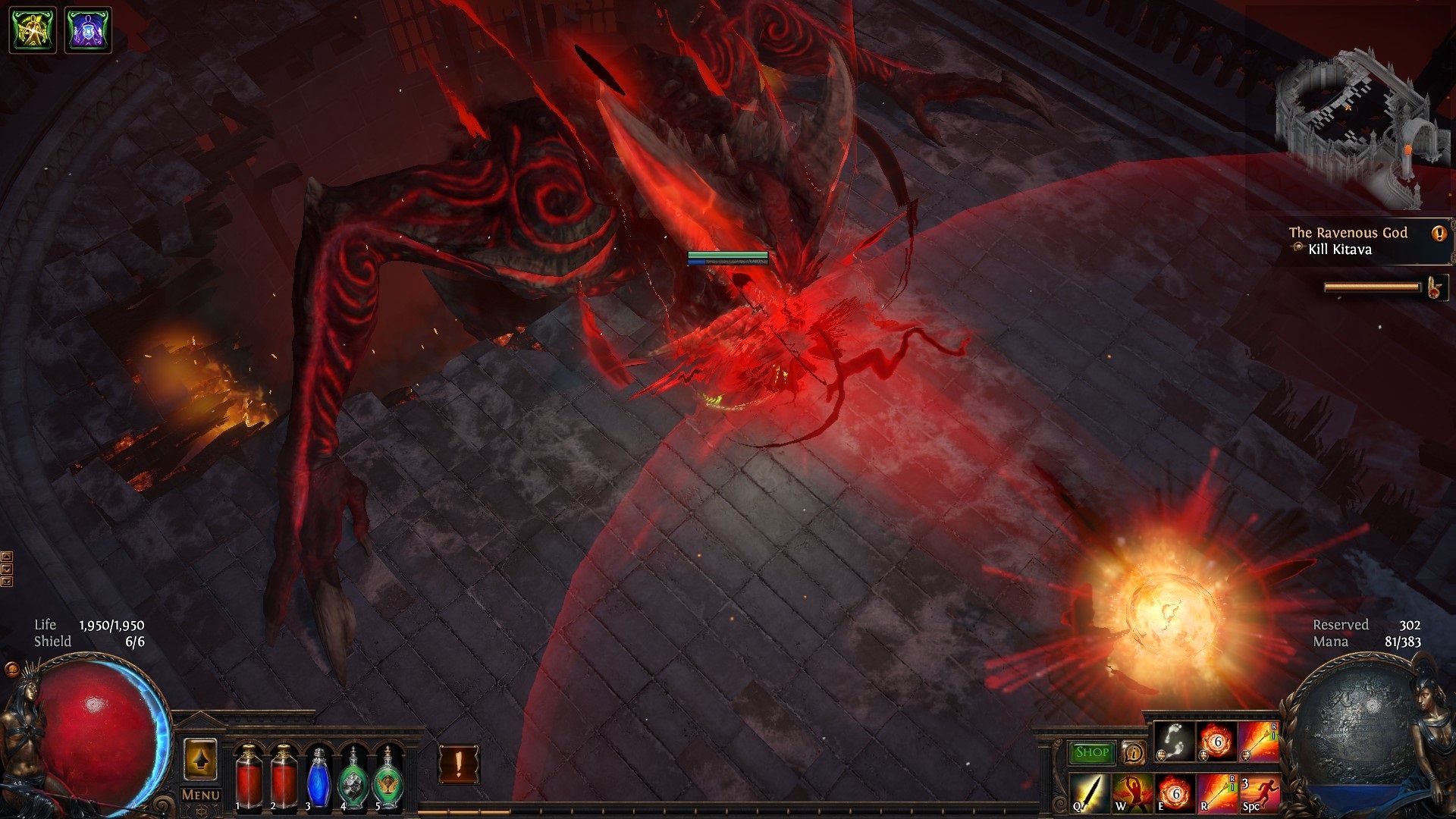 Before I knew it I was at Kitava and killed that boss off without a single death. While that is nothing new for me to do nowadays. It felt good with how quick and easy the fight went. I had a good feeling about the rest of the acts to come.

I ported into my hideout after the kill and made sure I was near resistance cap at best I could by using the crafting bench. Thankfully all the Archnemesis I had been farming dropped enough currencies to craft up a bunch of gear I had.

While act 1 was a struggle. Act 6 which is usually a bit of a struggle for me was a cakewalk without a single death. I could just drop totems and run out of the way of all the fire totems and other nasty things. Did not even feel like I needed all the resistance I had picked up. After some time I picked up my first Heist coin and I decided to do what I said I would do the least league when I played Path of Exile again. Every couple of levels when I had some orbs of chance I’d run-up to the vendor since it resets every time you level and pick up what I can.

The plan was to run these when I feel behind on levels that never happened. While it was tempting to run a bunch just to get more currency so I could pick up even more of them. I did not want to get too sidetracked with my main objective of getting into maps as quickly as I could.

I also did not want to get stuck buying up too many of these lower-level once just in case they turn out not to be worth my time. I will be putting more of a focus on them once I get into maps and clear out the vendor every time I level up.

One thing I had skipped over doing right away was my labyrinth (lab) runs. In the first lab, I would be picking passives that required me to have the fortification buff to benefit from. My second lab run would get me a passive that gives me twenty fortification. So I felt it was best to just do them both one after another. The first lab went quite quickly. Monsters were dying many times before I even put down a second or third totem. The layout was simple as well. In the second lab, I only had to resummons my totems once before Izaro was dead. While I felt like I could face tank him without healing. I decided to not test that theory.

I also took this time to stop what I was doing and try to farm a Tabula Rasa Simple Robe. I had been saving my Archnemesis tokens that give you a unique item that you can use at any level and can only spawn monsters as high as the zone. 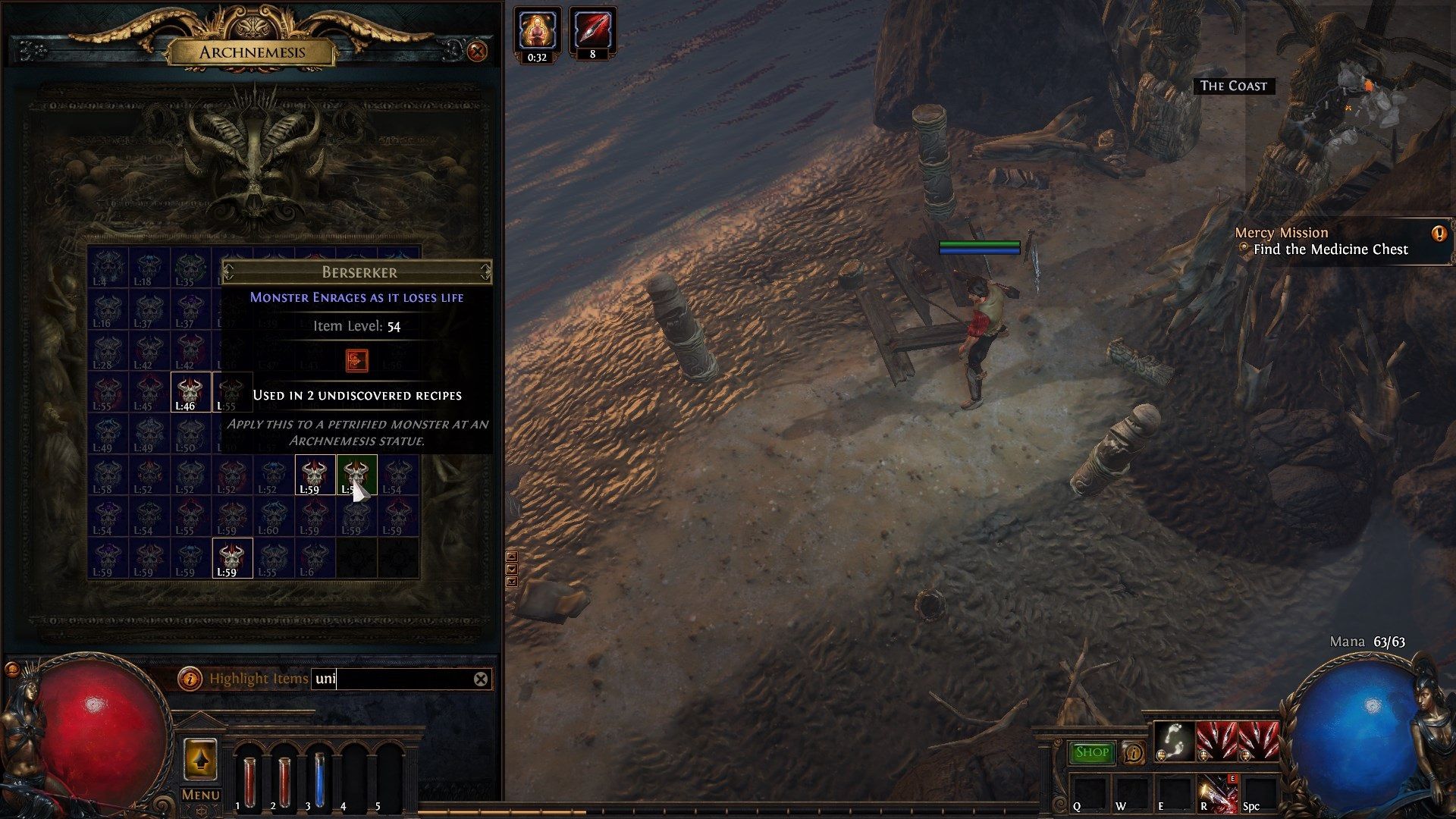 The plan was I would make a new character in the league. The tokens are account-based so my new alt would get access to the few I had been saving. I then would run the two you can do in The Tidal Island a level 3 zone that has only so many unique items in its loot table. I would do that till I got them, ran out of tokens, or the alt got 10 levels higher than the zone where it would stop. Luck was not on my side. I did not get a single item I wanted. At least now I have a few leveling items if I want to make a real alt and play something else. Which I more than likely will at some point as there are a lot of fun builds out there to try out. Before I knew it I was fighting Kitava for a second time. I did not even stop to gain a few levels to make the fighter easier. I did not stop to get new gear, work on my gear, or even swap out gems. I just dived right in and did not even have to portal out to refill my health flasks. It was an easy fight unlike it has ever been for me.

My goal was to hit maps on the second day of the league. Within the first 24 hours not only did I clear tier one maps. I did so still using Quill Rain bow and they were not that much of a struggle. Granted from here on out I need to do a lot of work on gear as a lot of this stuff I’ve not upgraded in a while. 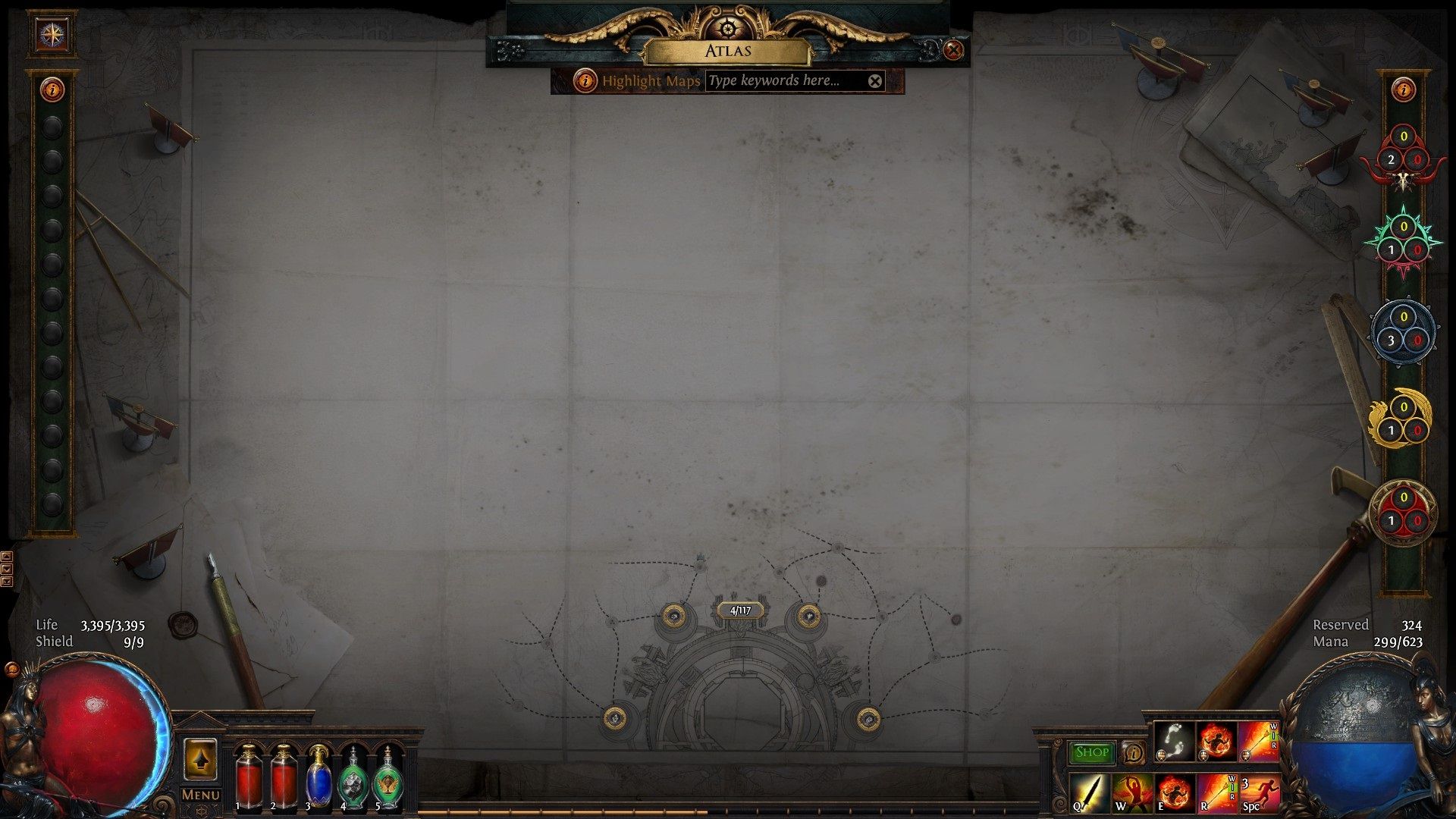 I hope everyone had a great first day in Archnemesis League. I had a blast and am so happy I found that bow that has carried me into maps with the Explosive Arrow totem build I’m using. I can’t wait to start running more maps and unlocking the new Atlas and all the adventures it has.