While checking the boats in Ironfist to see what locations if any were available I noticed I had a chance to go to Misty Islands. I had a few things I could pick up in Misty Islands along with some easy clearing. So I jumped on board the ship for the couple-day journey there.

You would think arriving by boat to a location you would be safe when you land. That is however not the case here. There were two separate packs of Baa attacking me from separate sides while I was in the bay. On top of that as you travel to one of the packs of Baa you end up getting aggression on a whole bunch of other stuff as well. By the time everything has stopped moving you more or less cleared the small island you have landed on depending on how much running around you did to keep a decent distance.

I ended up running up to the castle to pick up whatever missions there were there. Who knows the next time I’ll even come to this island I thought. So after that, I went around to all the houses in the area.

Three of the houses ended up selling what I needed. Membership to fire, water, and air guilds. Without acquiring that I would not have been able to do what was next on my agenda. Outside of wanting to buy some cool spells, I wanted most of all to train all four of my party members with learning. This would help over the long run to speed up how much experience I’m gaining and level faster.

I do however need to invest some points into learning. Along with paying some further gold to train it up to expert and mastery once I have enough points sunk into it. While a bit of an investment over the long run it should pay off.

I then took a look at what spells I could get from the different guilds and what do you know I did not have enough funds to buy everything I wanted. I wanted spells like a spark, feather fall, water walking, and many others. While I had killed everything on the island I had arrived on. There is a teleporter that will take you to a chain of connected islands. I knew what was lurking on those islands would not be that hard to clear out. It would also provide me with some extra gold. The great thing about these islands is they are close enough for you to clear out the creatures near each bridge to get onto the next island. This helps make it a bit easier to clear out than running in full arrows flying. 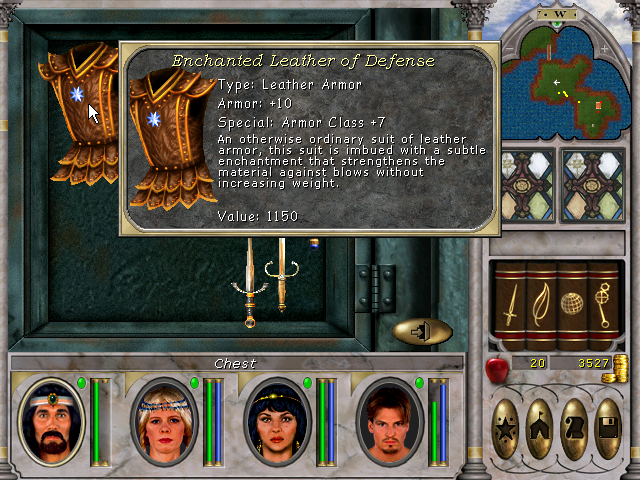 On the last island, I found this beast of a leather chest piece. A whole 17 armor class for one of my casters. That was a decent find for this area. It was also the only item that I looted that ended up looting.

Outside of that the other chests I looted and the creatures I killed did not drop a lot of gold or stuff. It was at least enough to get a couple more spellbooks. I also spent some money training certain skills to expert level.

After spending all my gold I went to check if the boat would take me back to Ironfist yet. Oh, it sure was but they wanted 250 gold and I had 86. That was going to be a bit of an issue. Since I had just cleared out everything easy to kill.

Thankfully there is a dungeon on the main island. While it took a few attempts I was able to kill off some creatures in that dungeon and loot enough gold to get off the island. It was however quite rough and a few pieces of my armor broke in the process. I would need to come up with a further 700 or so gold for repairs. I was thrilled to pick up a few spell books and skills for my characters. It was to say the very least not an uneventful little adventure to Misty Islands. There are also many more spell books I’d like to buy at some point. I’ll be coming back here at some point including a real attempt at clearing out the dungeon there. An expensive little trip it was.