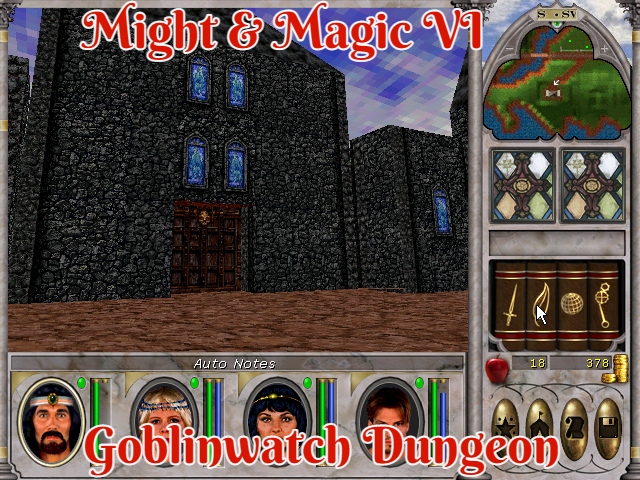 I decided Goblinwatch would be the first dungeon I’d clear out in Might & Magic VI. While the first time will be a bit rough since my group is not that strong yet and missing some things I’d like to have. It will be a decent source of some early gold.

Ideally, I’d be entering here with resistance to disease buff and cure disease. As the rats and blood suckers, creatures can make my party members sick. Once they become diseased resting is no longer very effective only allowing them to get about half their health and mana back.

The good news is Goblinwatch is set up so it won’t take long to get back to the entrance of the dungeon itself. The church is also not that far away if I want to pay healers to cure and heal my group. This I will be doing a couple of times during my first of this dungeon. The dungeon itself is found up on a hill in New Sorpigal. It is rather close to the border into Ironfist.

The town hall has a mission for getting the goblin code. There is also a goblin at the top of the castle of the dungeon who has a room that you can enter that is worth talking about once you have looted the scroll. While Might & Magic VI is known for having some massive dungeons filled with an insane amount of creatures in them to clear out. I don’t feel Goblinwatch is that large of a dungeon.

Once you enter the dungeon there are if it is your first time two different directions to take. I always head west down into a shorter room that has a few goblins to clear out and some chests to open behind sliding windows on the wall.

Just to be safe one of my characters the Knight has a couple of levels of disarming so that all chests can be safely opened while I am in this dungeon. It is quite an important skill to have early on with a few levels into it so when you open a chest it does not explode wiping the party. 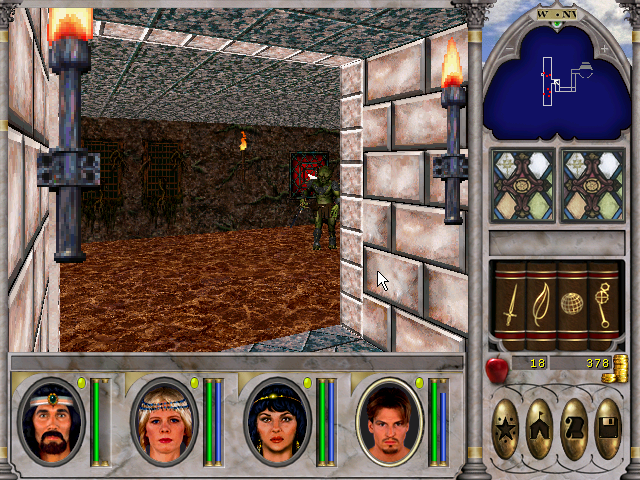 Like in a lot of this dungeon when clearing it I have a certain tactic I use. I’ll use the long narrow corridors to bait out the goblins one at a time if possible. This will also be some range to take them out with bows I have bought with +4 damage on them from merchants.

Later when I return to this dungeon after it has respawned it takes a considerable amount of time. I’ll be a bit more brute force and use spells to clear out areas like these quickly instead of trying to take it slow and easy. Once the room is cleared out I walk around clicking the red glass-looking windows on the walls. Some of them will have chests hidden behind them to loot. This is also where you will get the Goblinwatch scroll that has a code decipher for unlocking doors.

I then headed back to the main entry point of the dungeon and down the other path I had yet to take. It forks off in two different directions. One leads into a chamber where you need to click on tiles to enter a code. 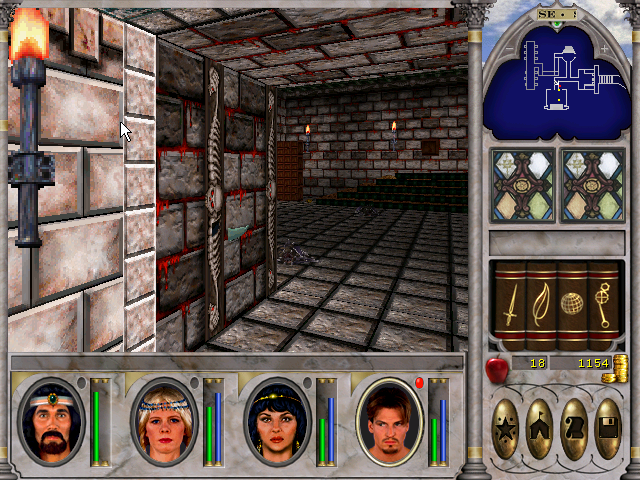 The other leads into a room that you need to clear out of blood suckers, rats, and goblins. Once you do there is a button on the wall in the back that will lower two doors. This then will release further creatures.

If you do things right you can clear out quite a few of the creatures by killing them while they are stuck in the wall. Otherwise, you can use the distance of the hallways to bait a few out and have an easier time killing them.

One of the rooms you end up clearing will have a chest in them. While the other is just a dead end. Either way, it is nice to get some experience. 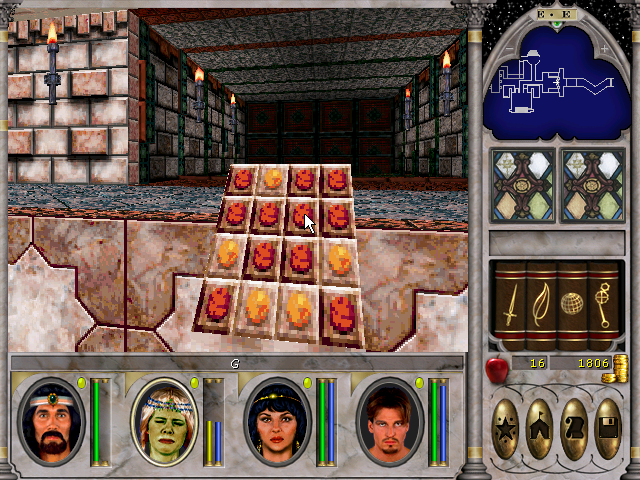 I then headed off into the chamber with the puzzle doors in it. While puzzles are often not something I recall a lot of in games. I’ll never forget the answer is just goblin backward. As you click on the correct tiles the doors slowly start to open to relieve a fast area behind. 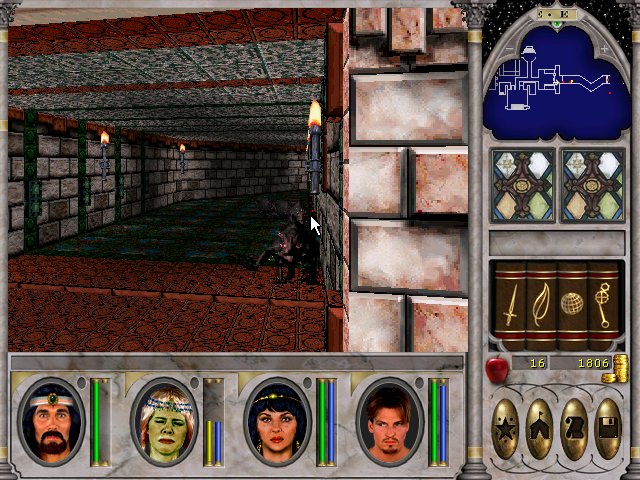 Like most dungeons in Might & Magic VI rushing into a room is a great way to get killed unless you have some decent spells or damage. As such I just slowly walked my way up into the next room. Walking backward and shooting arrows to clear out anything that starts moving my way.

Once I cleared out that room I held off on jumping down the hole into the back that drops you down into an area you have to clear your way out. I used that opportunity to head out and cure my party. I also turned in the mission for Goblinwatch at the town hall for a nice 2k gold reward.

Since my bags were not that full of items I decided to not go to the different shops to sell them. I also did not feel like I needed to take a trip to the trainer to get to the next level for my party or spend any gold on new items.

I then headed back into Goblinwatch back to the place I stopped at. I then jumped down the hole and readjusted my viewing point to be pointed down slightly using the DEL key on the keyboard (default keys) You can use END to move back to the standard viewing point.

There are many tunnels that downward slant in this dungeon. Making your arrows miss and it harder to see. A few times I’d quickly change my viewing points to move it down slightly or back to normal as needed. 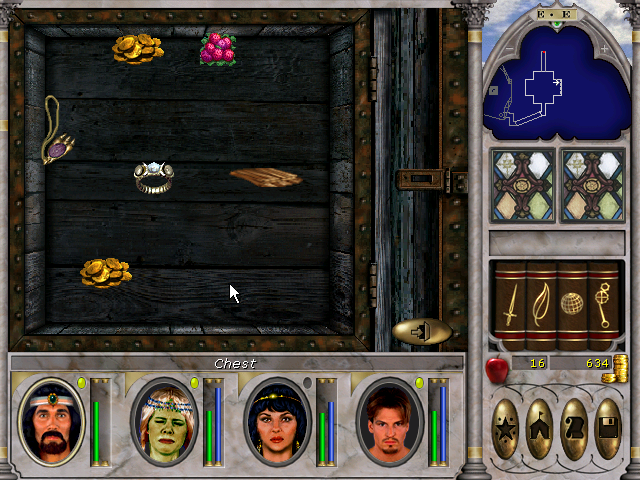 Inside the large room was a set of chests. The third chest if I recall was a trap that spawned in some 3 blue goblins. I also found some decent loot in the chests as well! I ended up wearing the diamond ring and cloak. 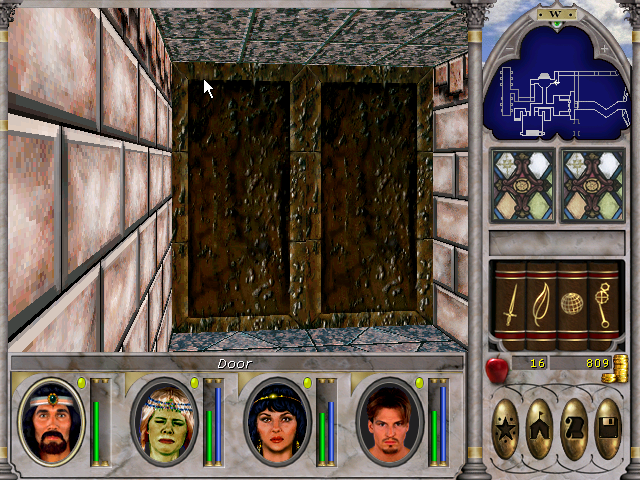 I then ran and opened up several doors heading west. The second door you open reveals there was a hidden wall in the main entry point that you can only open from one side. This makes it quite easy and fast to get back to the entryway of the dungeon. 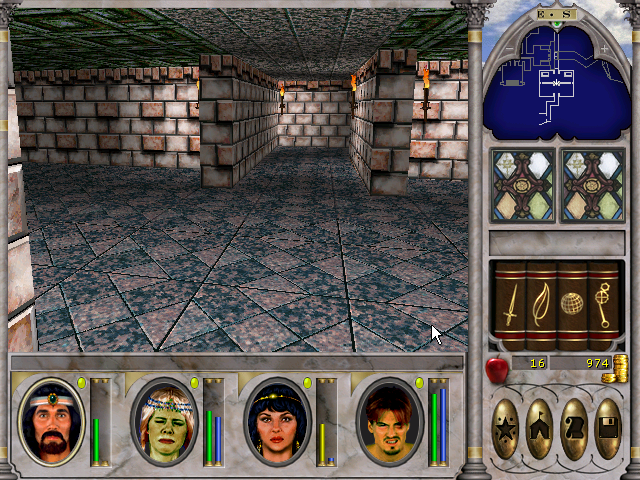 After that, I backtracked to the room leading southeast down. There was a bunch of creatures lurking in the corners of the four separate areas. I slowly walked in and then ran back out once I got some aggression and started to slowly work on clearing out what creatures in the large room by repeating this tactic.

You then keep heading down till you hit a fork with the two final areas of this dungeon. They are both large caverns with chests at the end of them. With some loot to be found along the way. 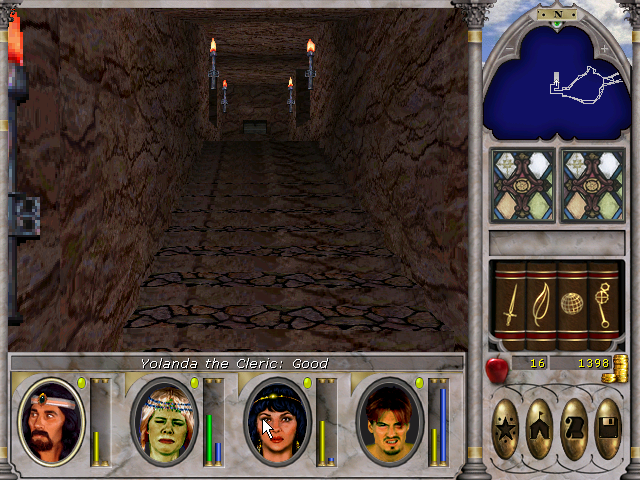 In the western-facing cavern, there is a trap set up right before you get to that chest. You can see two openings in the walls on either side. Once I got close enough quite a few creatures will come pouring out. I approached this part slowly so I could run back without getting trapped making it a lot easier to clear out. 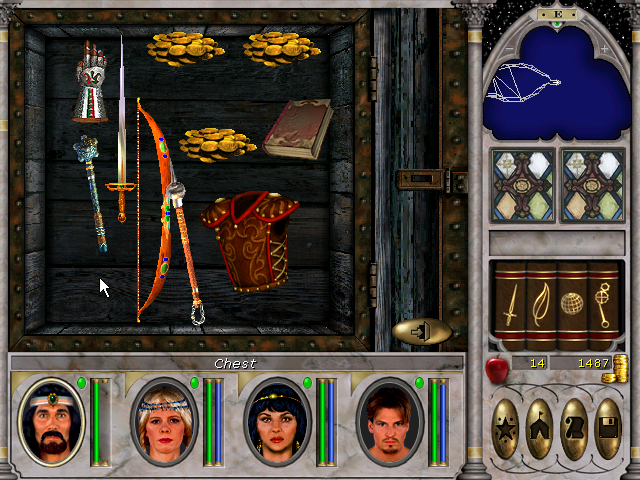 After all of that, you just have the other cave area to clear out. At the end of it a nice phat chest. This was another one I needed up getting some upgrades out of. It’s a shame I already have four of those bows and it is a decent one to have early on. It was then time to leave. I would turn in any missions I had yet to do so for, get any cures needed and pay to identify any loot I could not identify on my own. This chest armor was perhaps the best piece of loot I got out of there-- not bad.

I ended up gearing out my healers first. Then making sure whatever was not an upgrade for them went onto my two remaining characters in the party.