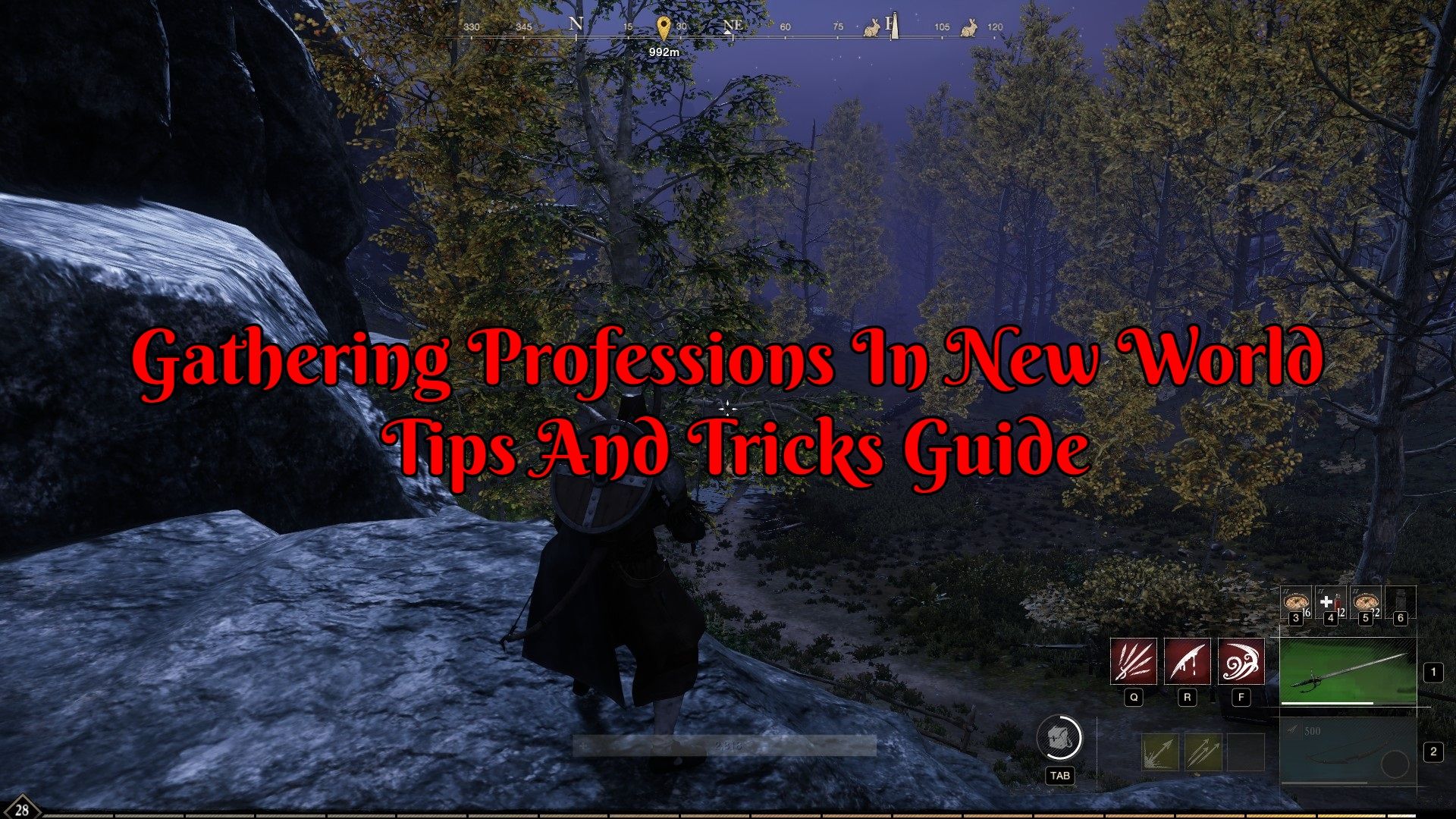 New World game by Amazon has a few gathering professions to partake in. Having the upper hand over other players with having a deeper understanding can make the game more enjoyable. Regardless if you are logging, mining, harvesting, or skinning there are quite a few tips and tricks to consider. 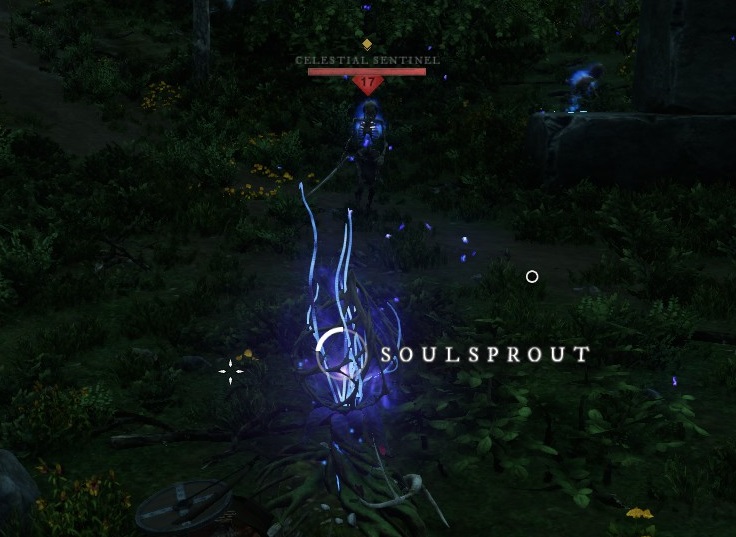 There are several little things you can pick up on to make gathering resources in New World a lot more enjoyable. Some of them I wish I knew when I first started. Others I’ve learned from playing other games and I bring that experience I have into New World.

Pay attention to your compass. Once you get high enough in a gathering skill you can “track” a node. This is when the resources icon starts to appear on your compass without you needing to do anything else. To see what levels you need just click on a gathering profession while in the character (k) menu. Have a bag is a full policy. Far too many players return to town with their inventory not being full. You could have farmed more resources before going back to town.

If you become encumbered you can control left-click to spilt up a stack and drop what you need on the ground. A long walk back being slow is not worth a couple of extra units of resources. 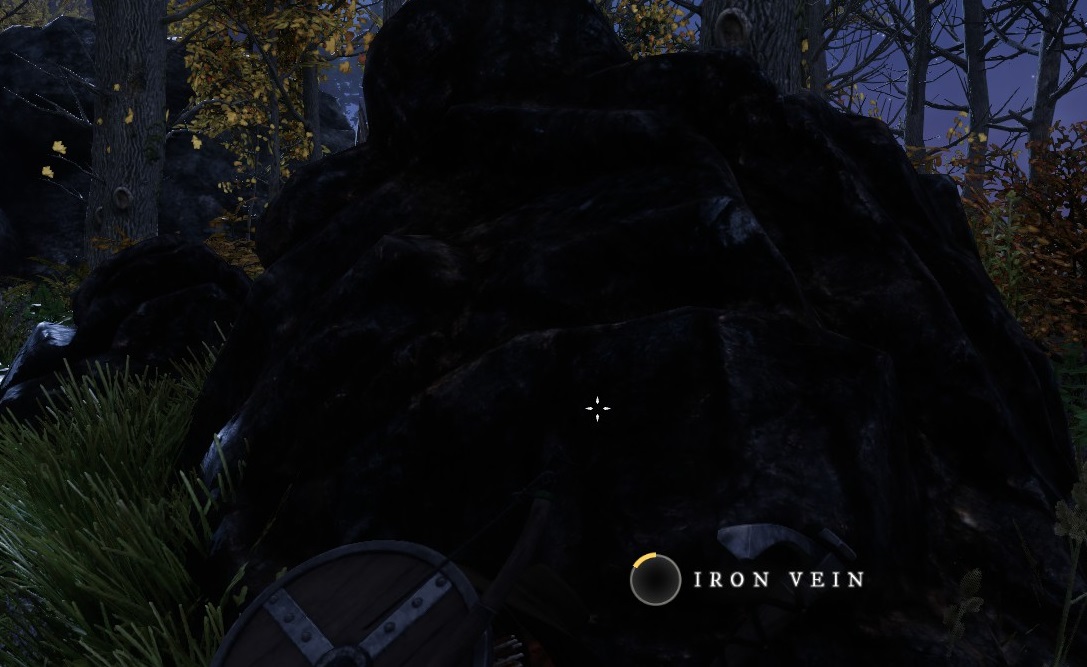 When you come across a cluster of resources nodes gather the largest or rarest first. Far too many times I’ll come across another player and they will be gathering the smallest node first. Naturally, I’ll take the one that yields the most resources for myself.

If you have a weapons skill like a leap you can use it to beat another player to a gathering node. Do note there will be a brief moment where you can’t press E to gather. Those that know this can sometimes beat out the person that used a skill to close a gap. Those that don’t know this thing that player already has that node.

Many players are non-confrontational. Even if neither of you is flagged for pvp sometimes all it takes is swinging your weapon at them or following them to a node or two for them to get out. Do be careful not to go overboard. A verbal altercation or harassing someone over a node is taking it too far and not worth getting suspend or banned.

If there is a lot of competition and you can’t clear them out do what I call “node confusion.” This is where you are no longer mining in a perfect pattern for your route. Instead, you are going ahead and mining every second or third node before having to loop around again to the start. Your goal is to make the respawn confusing to the point only you know when the next node should spawn and where. Leaving everyone else not finding anything or camping a single node just to get something.

As soon as you unlock bag slots at levels 10, 30, and 45 make sure to get a bag for that slot. The more you can carry the longer you can stay out. Ideally, before you go out on a gathering run you should have zero weight in your inventory. Things like food and potions can be equipped and their weight no longer counts towards inventory weight.

Unwanted and worthless items you loot while out gathering can be salvaged or dropped on the ground. There is no point in taking something back you don’t want. If it’s taking up inventory space that is one less of something you are taking back each gathering trip or more.

If you are selling gathering items for gold on the market there are some things to keep in mind. If you spent hours gathering your goal is NOT to sell everything as quickly as possible for the lowest price. You want to find markets that have low supply and higher prices. Then you want to find a price point where you are selling at a rate that you are not over stockpiling resources from time spent gathering. While it will take some time to learn the markets. Items that sell right away were underpriced. As the old saying goes it’s all about that location and it’s true. While I could tell you where to go for different gathering professions in New World by Amazon at different levels that would ruin the spots and not teach you anything of use at all.

Lots of people like to search the internet and go to the first location they see in a video or blog post. The issue with this is that is what everyone else is doing! Those spots tend to be overcrowded with players and that is exactly what you want to avoid.

The good news is there is an online map for resources you can gather in New World. This can be a great place to start to get an understanding of possible locations to go out and scout for making a route out of. When it comes to gathering routes there are a few factors I like to take into account. I’m usually looking for a place that is out of the way enough random players are not going to show up and mine nodes on their way to another location. I also don’t want one so far away that I’m having to spend more time getting to it than I will be logging, mining, harvesting, or skinning.

Ideally, you have a route where you can go in a pattern that you do not have to backtrack over to get to the starting point. You also want it long enough that nodes are just respawning as you return. You don’t want too much time as someone might start farming those nodes in that area thinking no one else is around. I like to make sure a gathering route has secondary resources I can gather in the event I have some downtime. Another player might have mined some nodes. Resource respawns could be slow due to not enough active players. Finally, that other resource might be harder to come by making it a nice bonus to pick up.

Generally speaking, unless you are working in the skinning profession you want an area that is not covered in monsters to fight unless that really is the best place due to the scarcity or how to spread out the resource tends to be outside of low NPC population area. Every time you have to stop to fight is time you are not gathering resources in New World.

if possible you can you want the location to have something that is keeping random players from just wandering into that spot. It could be a natural barrier such as a mountain, waterways, or other environmental factors. It could also be something like a hard creature to kill along the path to get in.

With this knowledge in hand, you want to go out and scout an area and give it a try. It’s one thing to look at a location on a map and think it’s perfect. It’s another to go out to that location itself and see how it fairs with movability, monster density, and the gathering speed bonus you have. You might just find an area that is harder than you like such as having to parkour up and down mountains and you could gather more per hour elsewhere. There are a lot of different sources of gathering buffs in the New World. For some of them, you can simply get on gear. While others are more situational such as who controls an area or your reputation in the area. One of the first things you can do is see which faction controls a territory. If you are that faction you get increased global luck that affects your chances of finding rare items. In addition, there is a gathering bonus for that faction.

If you have plans to gather in a certain territory for a long time you can pick bonuses that will affect your operations in that area. The first one I like to go with is gathering speed for quicker node farming. I then find having more storage important. Reducing fees is usually not a priority for me in my main gathering territory as I tend to sell elsewhere that could however be something to get after increasing others first.

Items can have a different bonus on them to help with gathering. As far as tools go one of the more important things already mentioned is having a tool that matches your level for as much gathering speed as you can get. 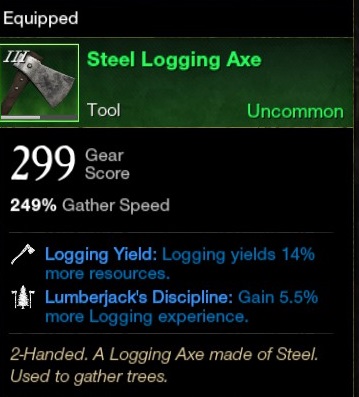 Other tool perks you will want tend to be what you are doing. The yield bonus is always nice to have as you are gathering ore. Azoth Extraction can be great if you travel the map a lot for arbitration selling (beyond the scope of this guide). Discipline for higher gathering experience while can be a great secondary it’s never a focus for me to have. Durable is my least favorite one as repairing is not an issue in this game. 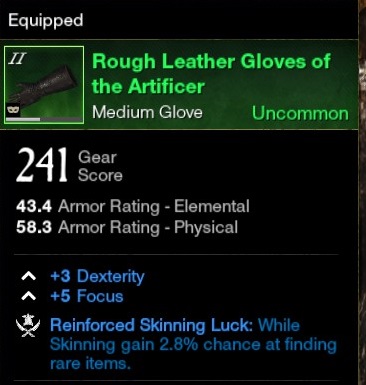 In addition to perks on your tool you can also luck on the armor you are wearing as well. Reinforcing Luck on gear can be a great way to get more rare items from gathering. Do note you want the reinforcing, adored, or other luck bonus for a specific gathering profession. The general luck perk appears to be for monsters and chest looting only.

If you are someone who is focusing on just one or two professions having perks on your bags can be a great way to extended how long you are out before needing to return to town to unload. Bags can have a gathering-specific burden that reduces the weight of those gathering items. For consumables, you can pick different foods to boost your luck for 20 mins at a time. These do not stack with each other and you can only have one active luck boost at a time from food. These are the best use when you are single targeting a gathering profession and are not being interrupted by monsters or other players. In addition to the food, you can also get proficiency boosters potions. The low-tier boosters offer a lower bonus and last for a short amount of time. Depending on what you end up using will come down to cost and your expected return value. Spending more for a temporary boost than the value you will get out of it is not worth doing. 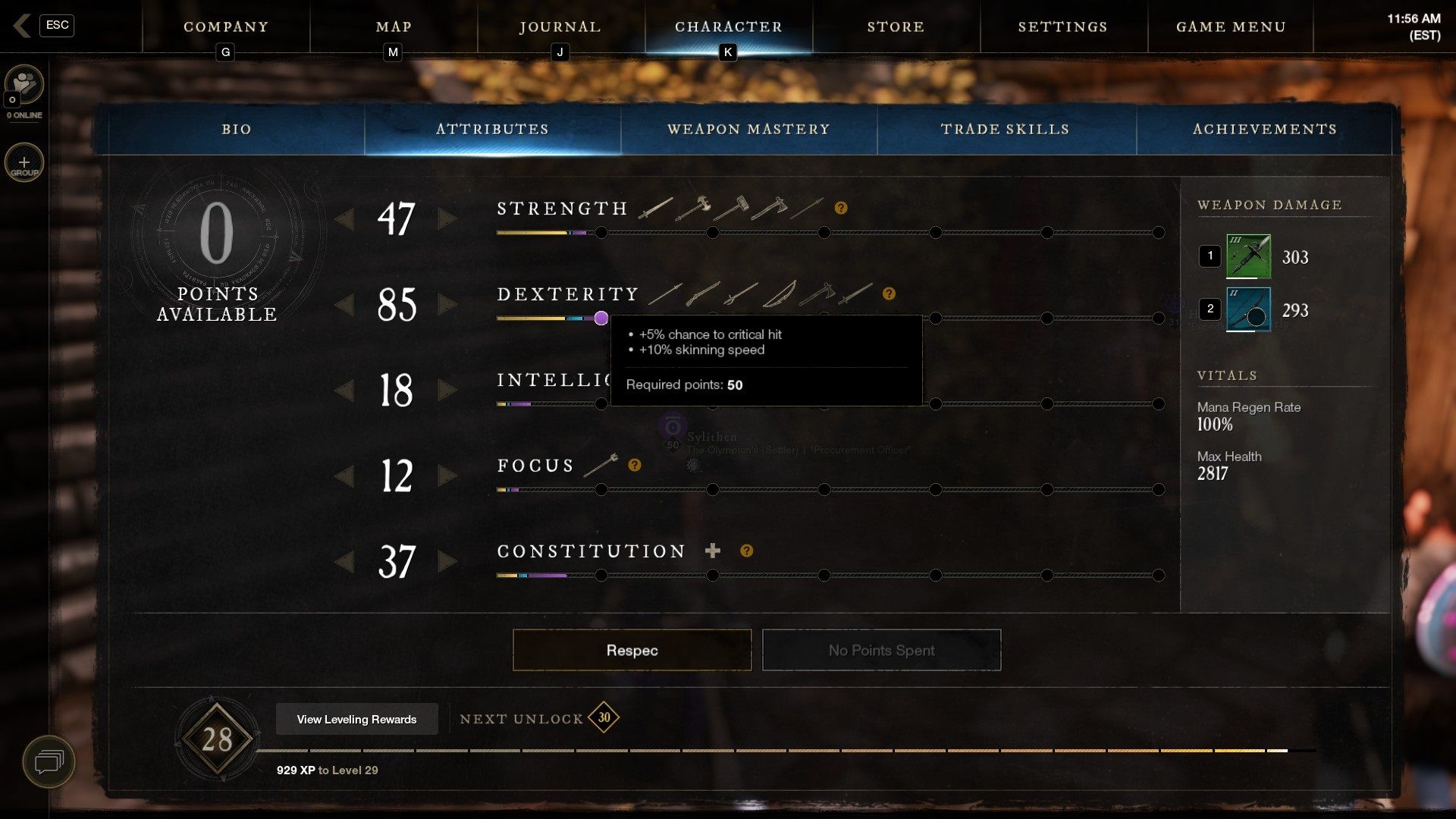 If the primary focus of your gameplay is gathering then focus on attributes that yield a bonus for the gathering profession(s) you are focusing on. You get attributes from leveling up and armor. Every 50 points into an attribute will yield a bonus: strength for mining, dexterity for skinning, intelligence for harvesting, focus for fishing, and constitution for logging. In addition, 100 Strength grants +20 encumbrance which is useful for everyone. Now you are armed with long-term knowledge that will give you an edge over other players in New World. You should be able to find that sweet farming spot, fill your inventory, and recall back to the inn while everyone else is farming less and fighting over what little nodes they can find.