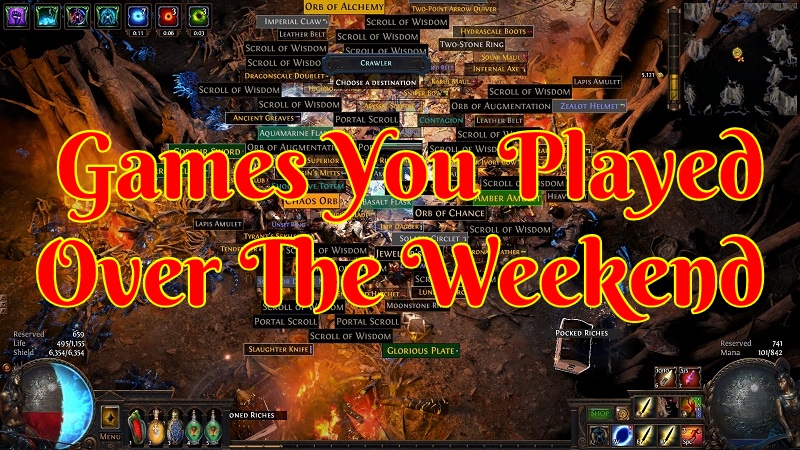 While taking a break from Steem Monsters and spending most of Sunday with some family members who love watching the Super Bowl. I did not spend too much time gaming. This did leave part of Friday and Saturday for my current love affair with Path of Exiles for Atlas and Delve progression.

I really lucked out and hit a few Sulphite veins while I was working on my atlas progression. In what would be taken me days or even a week I found in a matter of hours. Around 20k Sulphite if I recall. With me progressing in red maps now in tier 11 to 15 a single vein can bring over 1k Sulphite. 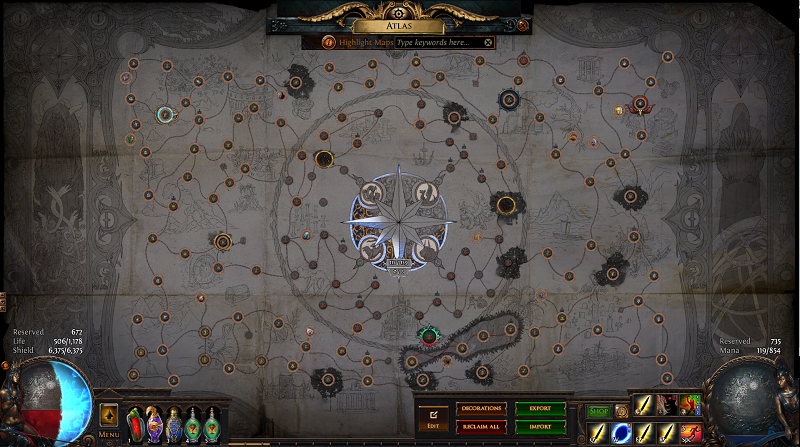 As always it has been hard to find anyone willing to sell maps that are not in bulk purchase. Since I really did not want be buying ten or more at a time I just stuck with it and kept farming tier 10’s and up. 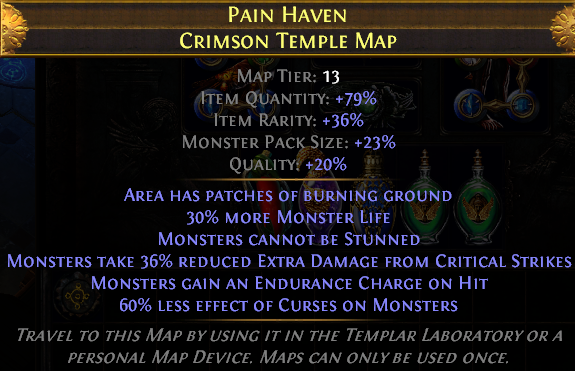 I have also saved all my Cartographer’s chisels up to this point and had a few hundred. Before upgrading a map they add up to 5% quality at a time to a max of 20%. So I use four at a time to make the maps harder but to also increase the loot. The great thing is if you need to use an Orb of Scouring on a map after upgrading it with an Alchemy. Due to a mod you don’t want on the map like reflect elemental. You do not lose the quality added from the chisels. You just need to “reroll” as they say the map by using another Alchemy to make it rare again.

Since the maps are getting a bit harder and I just wanted basic map completion to try and up my chances of the maps dropping I first did not go for the atlas bonus. On red maps, you need to corrupt rare maps. Corrupted maps cannot be rerolled so you are stuck with whatever mods they get. Since I’m not set up to counter any reflect damage mods with my current gear if I roll of those that map is more or less “bricked” for me and I have no use for it. I would instant die if I tried running it anyways. As such, I rather get some runs in and try to build up a map pool of some higher ones before trying to get the atlas bonus on them.

Speaking of atlas bonus I am now up to 115%. This means from now on all maps drop one tier higher and I have a 15% chance for it to be two tiers higher. The atlas bonus can become quite a powerful thing when trying to sustain higher level maps. It is also a costly thing to purse as mention with “bricking” of a map when you need to corrupt them at the higher red tier.

I also luck out and ran into Zana a couple of times. While inside a map she can appear and grant you with choices to open another map within. Often times they are the same tier or higher and they could even be corrupted. As such you can get some free bonus upgrades and even some map drops. 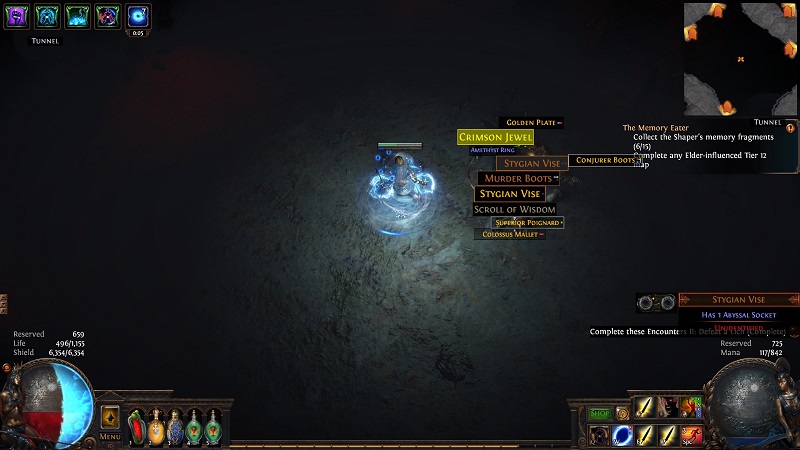 One of the crazier things that happened to me was while in a map I got Zana and that one had an abyss. So I was within a map within a map in an abyss! The loot was not that great. A double socket abyss belt is not worth much. Now if that would be a helmet that might still is worth something this late into the league.

I also had my first ever tier 16 map drops. It was a Pit Of The Chimera. I’m saving it for later. While not worth the most out of Tier 16 it’s also not a cheap map. I want to make sure I have some better gear. I have 15 red maps I have not had a drop or beaten yet. 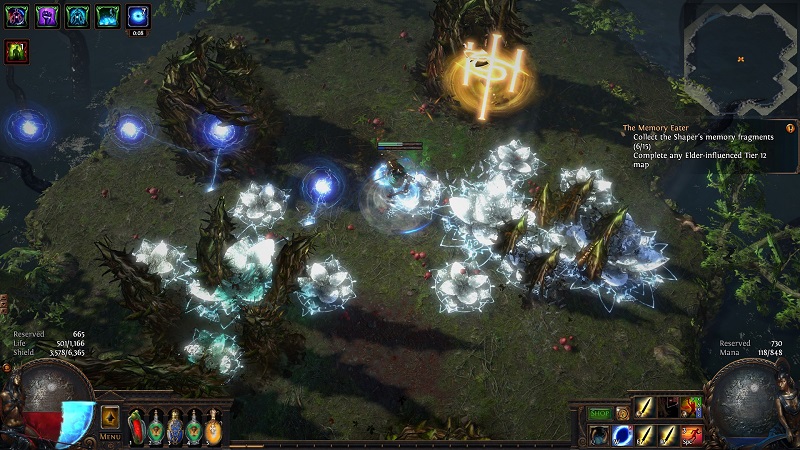 I also faced my first Elder Guardian ever. I really don’t know much about them since I’ve never tried to kill one of them before. To my shock, he went down without much of issues. They are at least part of the league challenges in taking four of them out. I don’t know much beyond that. I even managed to sneak in getting a screenshot without getting killed. He was spawning some kind of plant things which I did not test out getting trapped in. Along with some spikey looking plants. I avoided them as well they shot out white flowers. It was a strange encounter that was for sure! 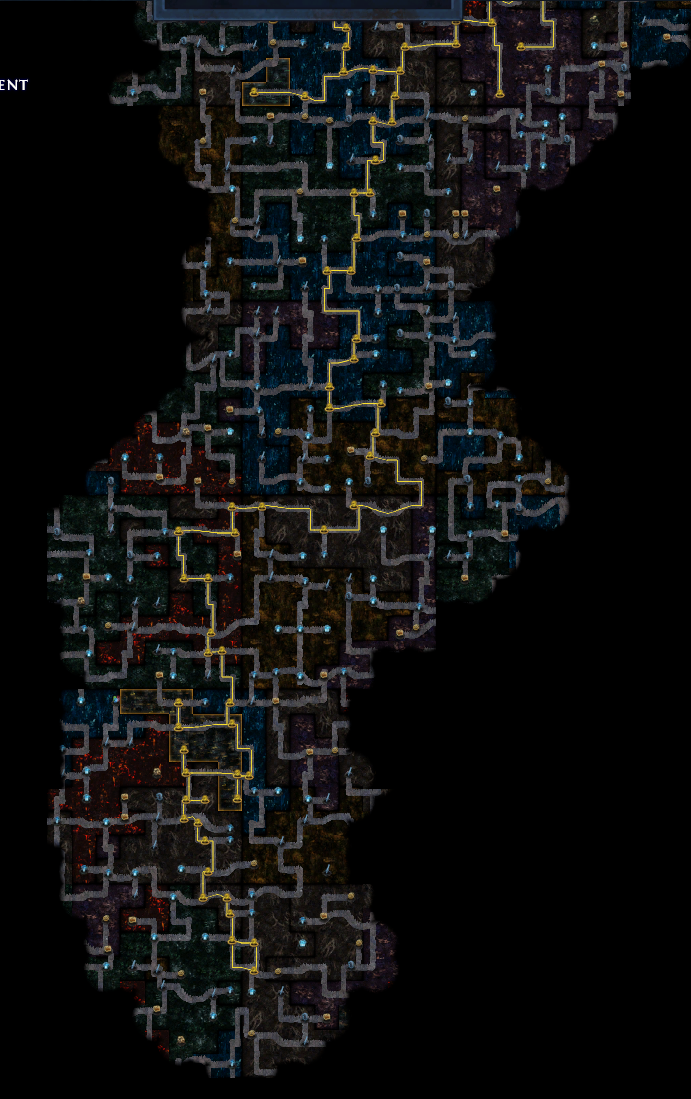 I managed to go from depth 120 down to 156 which is quite a leap in a couple of days. I’ve only included the progression screenshots. As trying to show the entire thing is getting just way too long and my map is all over the place now in width as well.

I just fear I’m going hit from the looks of it some kind of dead or prolonged sideways tunnels. At one point I had one node cost over 1,200 Sulphite to travel! Thankfully I did not get killed and have to spend even more running it again. 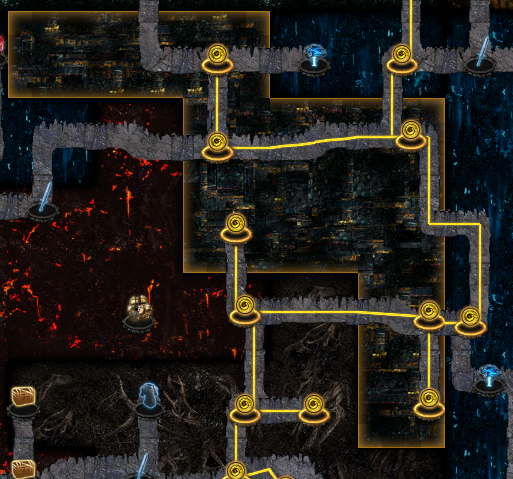 While I was exploring down those 36 depths I came across a small ruined city that had six nodes in it. There was really nothing noteworthy to speak about while I went down to run them. I also did not get any screenshots and sadly you cannot enter them again once you leave them either by exiting or death.

After I ran out of Sulphite I ran back over everything searching in the darkness for barriers to break down and loot to be found. Between the cities, random drops and some hidden loot I think I clear around 120 Chaos so far.

This ring also dropped. Anything I could find that compared to it was worth a couple Exalts each. I keep lowering the price a little here or there as I’m not quite sure what the fair market value really is for it. If I can at least get an Exalt or two I would be really happy.

I’m about two Exalt short of buying a big upgrade for myself called a Watcher’s Eye. Which tends to go for around 8 Exalted orbs each if you are lucky. While trying to get some mods I really want on it can make them go for as much as 20 Exalt I’ve seen people try and sell for much less.

Prices also fell a little bit after the weekend ended for Exalts. From a single Exalt costing 195 Chaos each down to 180. Either way, I’m hoping to buy a jewel soon that has gained energy shield on a hit and some other mods I want. 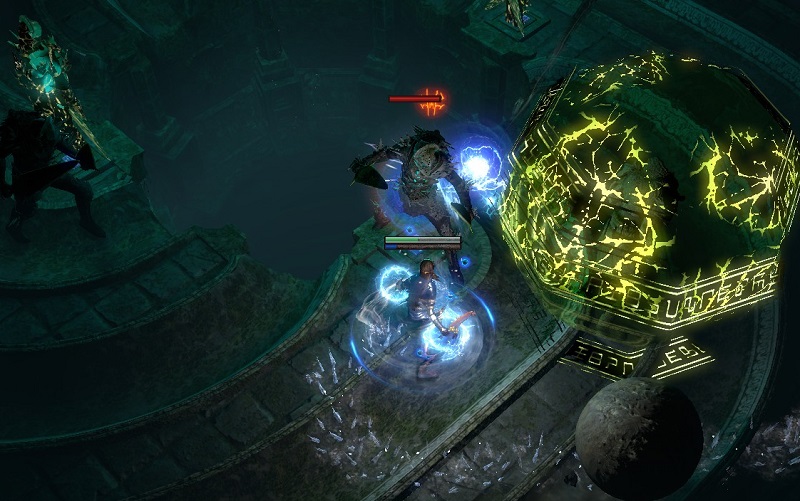 All in all, I had an amazing weekend. I hope everyone else that managed to get some gaming time in. Have a wonderful week!

Screenshots were taken and content written by @enjar. Screenshots are from Path of Exile.