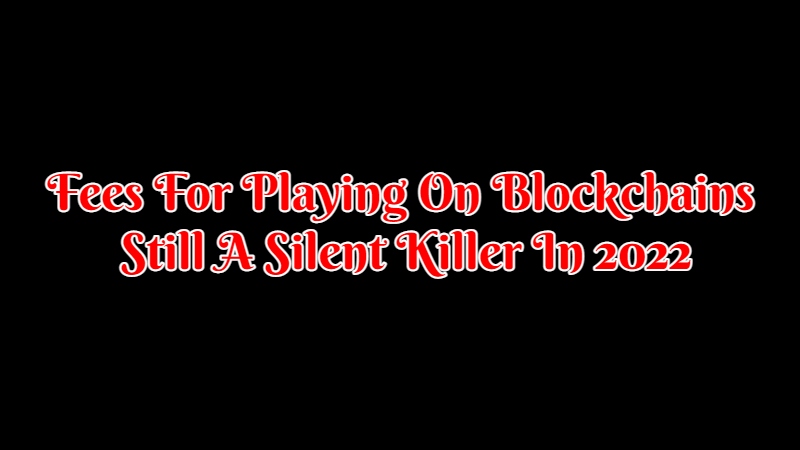 One thing I have not talked about in quite some time is the games I’m playing on different blockchains. That is mostly because time again and again I’m being disappointed by not the actual games themselves but the blockchains they are running on.

One thing I feel gamers keep overlooking is any costs of doing business on a blockchain. While here on Hive it’s easy to not have any worries about such things. Elsewhere however you can be losing more money per transaction than you were expecting to be getting worth of game assets and asset sales.

A classic example of that issue is now the Wax blockchain. They use a CPU, net, and ram system. Which I’m not the biggest fan of as that requires you to need to look at three different costs. It can be easy to fall into a trap of spending more on RAM while having to invest more and more into a CPU that you are just digging yourself a hole you can’t get out of.

One thing Wax does extremely poorly is communicating to the end users just how much RAM they are getting for 1 Wax spent and the overall costs. You can even go digging around on block explorers and all you are seeing are the costs of doing so not what you are getting. For 1 Wax .995 Wax goes to an address for ram and another .005 Wax goes to a fee wallet before you get more ram.

After spending 1 Wax as of today I was getting 1.29 kilobytes of ram. Ram is the fee you are paying for storing data on the Wax blockchain and unlocking CPU and Net you are not getting it back. That is such a pitiful amount of space you are getting for 28 cents. 1.29 KB of ram is about 1320 bytes.

So how far does that get you? Not very far if you are not careful. It can be easy to pay a few times worth of Ram over what you might even get in sales and moving a game asset around.

If you were like me you more than likely slapped a bunch of near-worthless game assets into something like R-Planet. R-Planet Over time stops rewarding older assets and games in favor of newer ones.

Back in the day I more than loaded up R-Planet with a bunch of 1 to 2 cent items. Since those items have increased in value for the most part and they are no longer rewarding me with Aether for staking them. It felt like it was time to do something with them.

That however became apparent to be quite the mistake and fast. Thankfully I pay attention to things like costs even more so when you are told you need to buy more RAM.

The good news is it looks like Rplanet is covering the RAM costs on their end. They are however known for chewing up a lot of CPU. Just a couple of un-stakes from them and my account is done for the day using the Wax blockchain unless you know a trick or two in getting CPU within paying for it.

The amount of ram they are releasing is 528 bytes every time I un-stake. That cost works out to around 11.4 cents at the time of writing this post.

While it’s true a lot of the items I want to take off that site has doubled or even 10 times in value. Since a lot of them were 1 cent fodder they are worth less than the amount of RAM being listed in the transaction. At least I’m not on the chain for those costs.

There is then the selling side of things. Many markets now have a small 5% for a few different things. That is understandable and even reasonable when it comes to selling a game asset. What is not are the upfront RAM costs for low-value items.

When I put an item up for sale on say Atomicmarket I’m usually paying a 353 bytes ram fee. This means any item I’m selling for less than 7.6 cents is going to be a loss. Expect they are not hitting you with just that transaction but a few of them. There is a second ram fee being charged for 415 bytes for a total of 768 bytes upfront. So anything you are selling for less than 16.66 cents after their 5% cut is not looking so hot.

If you look all over the atomicmarket place you see an endless sea of items being listed for a few cents. Some people are spending quite a few times more than the item will even sell for just to list it. For that item, then to sit there for months in many cases if it even finds a buyer. Then you have the buyer's side of things.

That however is not where it stops. Over the long run, quite a few games on Wax have cut down on the number of transactions they are making the user do on the blockchain to reduce costs. This makes sense when in many instances you are spending more in RAM for items than the value of the said item even is. Thankfully some games are paying that cost instead of passing it off to the user.

While I would try and look into those costs of just claiming things even further. The blockchain explores I know of suck to try and search for anything in them. It also looks like some changes have been made over the past year to address certain things within the Wax ecosystem. Not to mention I tend to stay away from games that are charging me more in costs than you could ever hope to get on a good day as “minting” fees. Which is quite standard on other blockchains that have issues with transaction fees.

While Wax is hardly the only offender of not handling low-value items well when it comes to transactions costs and gaming assets. Everyone should already know on blockchains like ETH those fees can burn you. At least gas fees have been rather low for a short while now on ETH. Many of their “low fee” competitors are no longer as cheap as they use to be either.

It also is somewhat amusing finding what I can only assume are trading bot account wallets. They are more or less just flipping items in high volume, not high worth. They are getting eaten alive due to transaction costs till they go broke or are taken offline. I guess those people forgot to consider the silent killer of fees.

While blockchains can be great for transferring high value for a low cost. Low-value items still struggle to break even on many blockchains. It’s not uncommon still to find games where items players need are not being sold as it would cost more than the item is worth. Buyers don’t want to overpay when they can just get a better item for a similar price. Gas fees are creating artificial floors and there are quite a few victims of it.

If you elevated transaction and other costs of playing a game two or even a year ago it’s always a good idea to do so on occasion. A large price movement or increase in blockchain usage can take fees being .001 of a cent and move the decimal a few times.