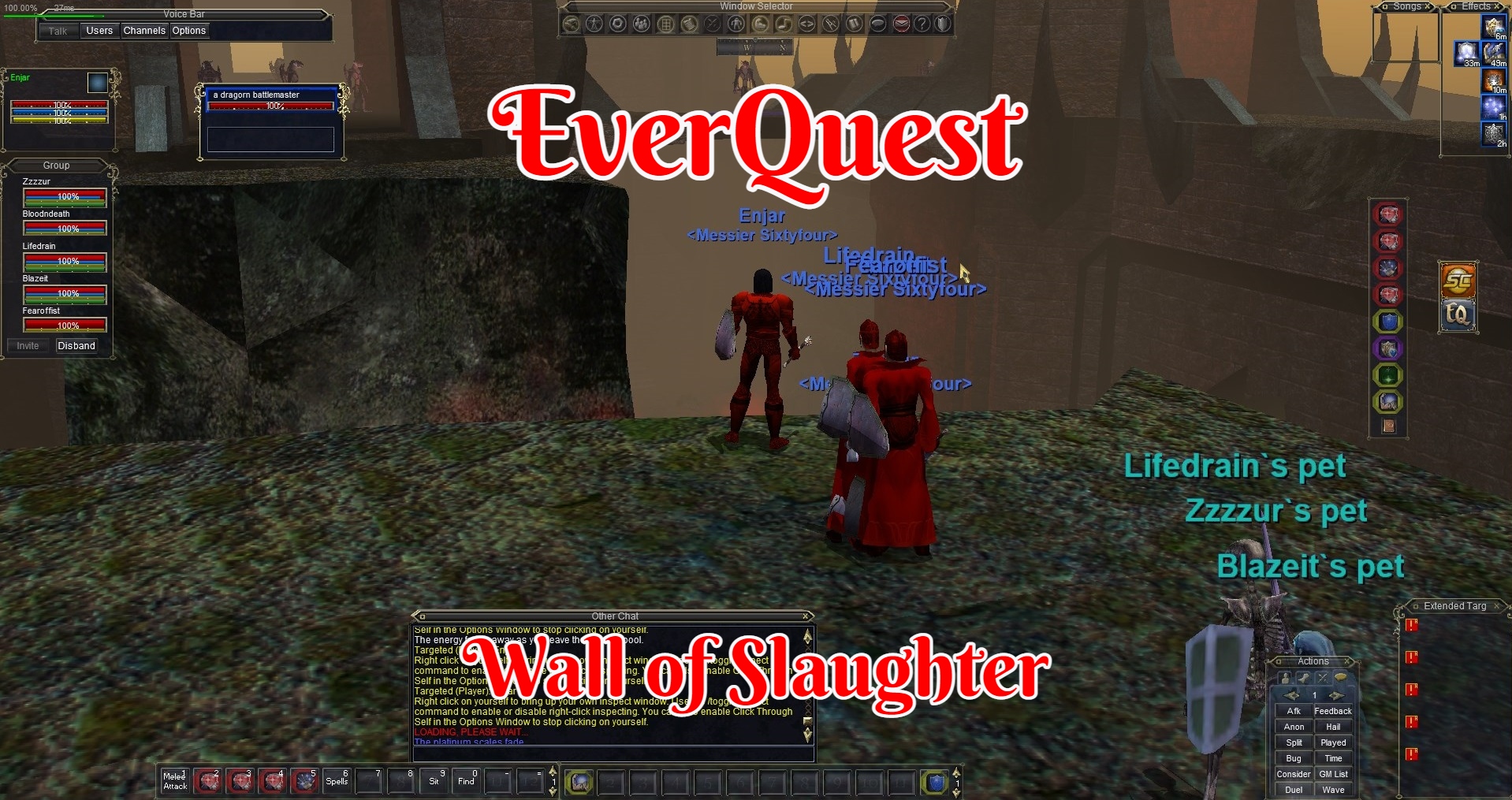 You know a campsite in a game was memorable when after all these years you can still recall the name of it. Cubby a name that becomes quite apparent once you see it is a campsite in Wall of Slaughter in The Omens of War expansion in EverQuest.

While I’ll miss Torden, The Bastion Of Thunder that place was starting to get a bit too easy. We would be skipping over the remaining zones in The Planes Of Power Expansion which I covered quite a few already.

Leaping quite ahead and skipping over entire expansions such as Legacy of Ykesha, Lost Dungeons of Norrath, and Gates of Discord if I’m not mistaken. While Lost Dungeons of Norrath holds a special place in my heart and might be something I revisit at a later point. I could not wait to get into Wall of Slaughter (WoS) in The Omens of War. First, however, it was time to offload our bags and do a lot of shopping. We were quite behind on picking up a bunch of spells. On top of that, the level of Defiant gear we had on was no longer cutting it. So it was off to Plane of Knowledge and elsewhere to pick up some needed supplies.

Once everyone was all set we gathered in the Guild Hall. The portal in there you can pay to have it set to Wall of Slaughter directly. This is quite handy as it puts you rather in the middle of the Omens of War expansion. We are skipping some lower-level zones from that expansion. The fact of the matter is I never spent an insane amount of time in them unless I was soloing back in the day. There are three or so total zones that we want to level up in from Omens and WoS just happens to be the first one. 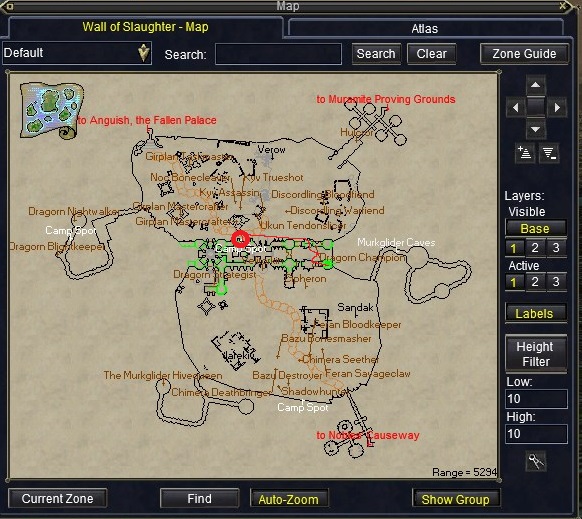 Amazingly the map pack that I download and have been using to get around is a little easier since the game has a mapping system but not filled-in maps. There are three camp spots marked. I am wondering if here on out that was a start to be a more common thing. As it helps a little bit for me to recall things having a poplar campsite already marked.

While they are not named and I’m quite sure people camped in a few other locations as well. One of them that is shown is where we are headed that I’ve circled in red and drawn in a red line to our path to get it.

It was quite an easy journey to get to the camp. Just a couple of kills and that was it. Cubby is perhaps one of the more popular spots for that reason alone. There are also a lot of names that can be pulled up here. 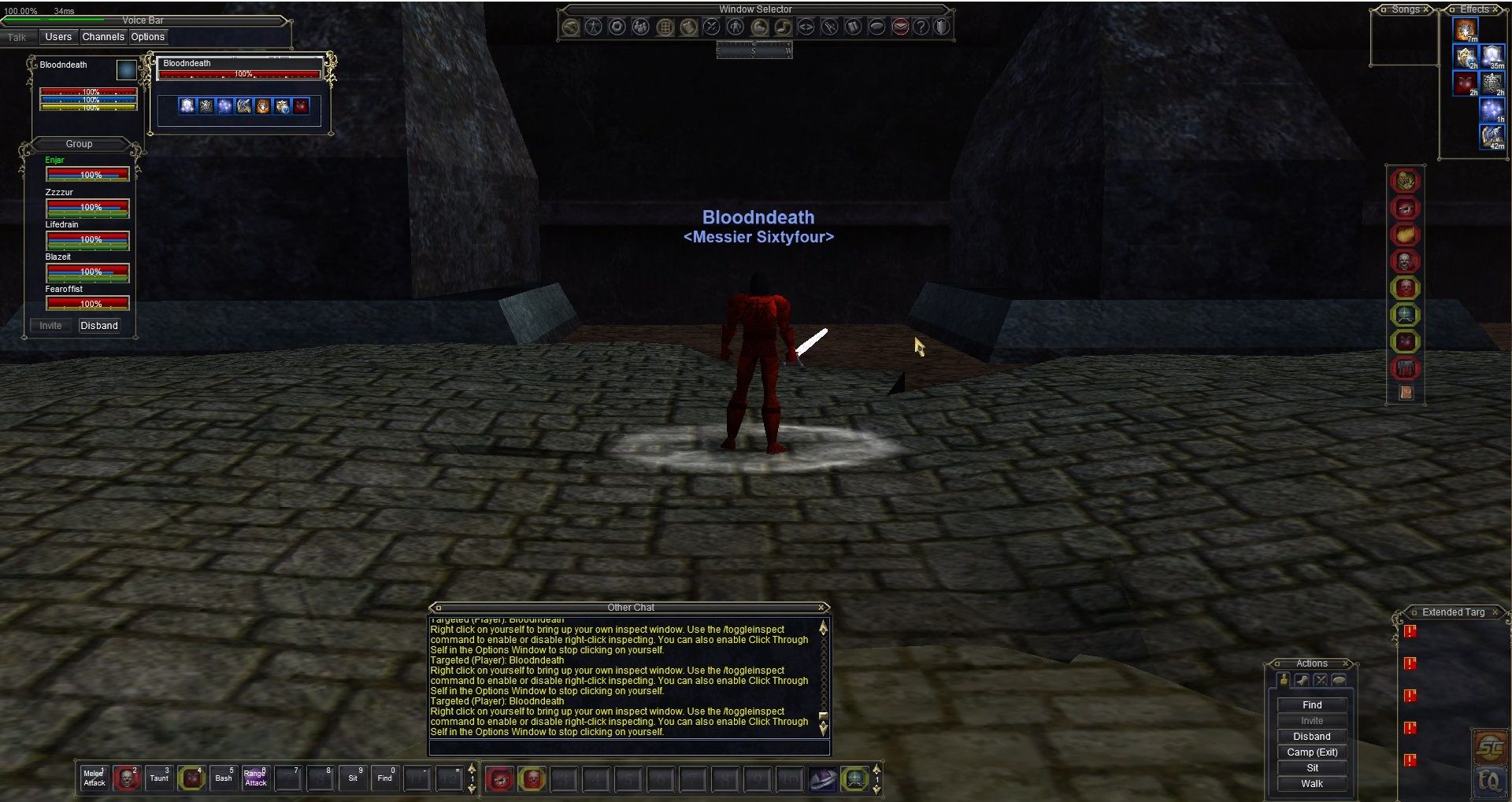 Once there perhaps now you can see why it was called Cubby. While the map only shows one location there are several cubby to duck away in here. There is quite a nasty multi-group creature that roams this zone. It is massive and will kill you in two heartbeats.

Back in the day, there would be three or so entire groups camping at this location each taking up their own cubby. The pullers in the groups use to get so bad fighting over tagging a name first or calling someone out for “taking” a mob that should for another group that was not killing fast enough to keep up.

We killed here for a bit before exploring around for a little while on this side of the zone. There are quite some interesting little places around and about. 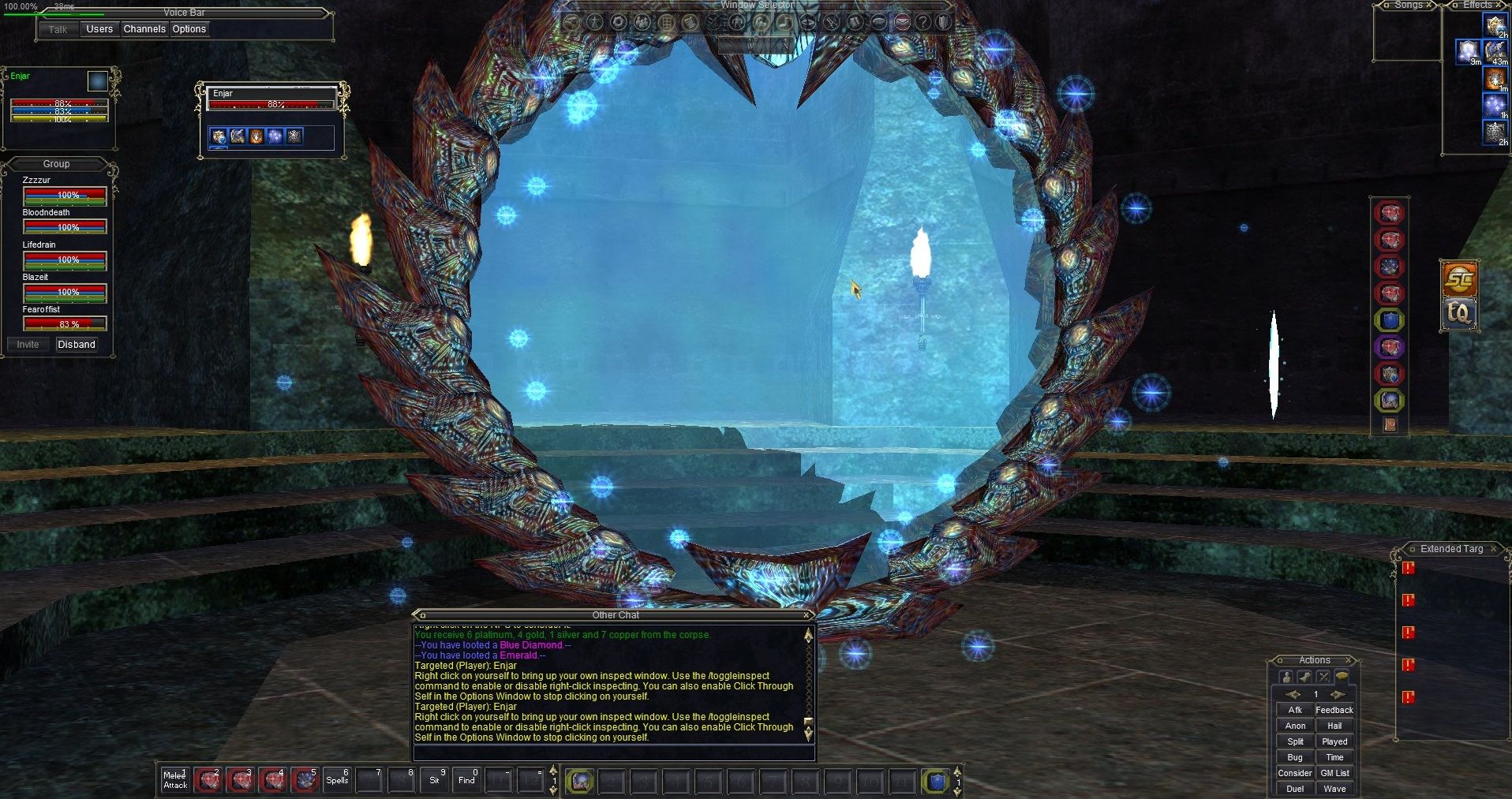 For the life of me, I can’t recall what this mirror did in WoS. I don’t recall if it was some sort of raid, event, or anything. The other side of the mirror appears empty. It is quite an interesting room in a mostly open area zone to be walking around in. 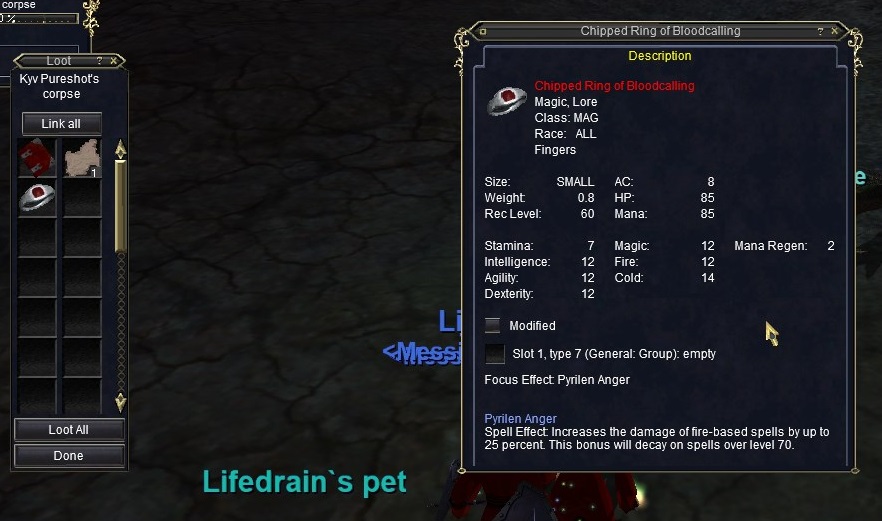 Since it appeared we had the place to ourselves we did go around killing a bunch of names that we could find. While many of the stuff I don’t recall what they were used for. There are also a lot of item drops and spell ruins.

This was one of those expansions I had to buy the day it came out since I was in a raiding guild. I think we were given one or two weeks to grind to a certain level and get a bunch of spells depending on your class. Otherwise, you would be missing out on raids or even removed from the guild.

Since the people I grouped with at the time were heavily geared in raid armor. We slaughtered this zone and any name we could find. We then rolled for the loot and sold them for insane amounts of platinum to other players.

While WoS was not the highest level zone it was kind of in the middle. With the gear and other stuff, we had back then. We go skip some of the lower zones and start clearing this one quicker than a lot of the player base on the server.

Back in the day, I use to make a lot of the platinum I needed to buy things with from the first week or two of a new expansion. That and I use to sell buffs in Plane of Knowledge as well. After a good expansion, I was set for quite a long time on money for raid and group supplies.

I can still remember looting a couple of high-value items from WoS. Loading up a shared boxing account some friends had. Ran up one of their characters to trade with me. Then put it on their trader alt in Bazaar and try and hype up the price of the item and get a quick sale.

As the hours went by the prices of those items would drop like a rock. So getting a quick sale, lots of times, and not having downtime to sell those items was key. Was always fun when you could make out like a goblin with money. 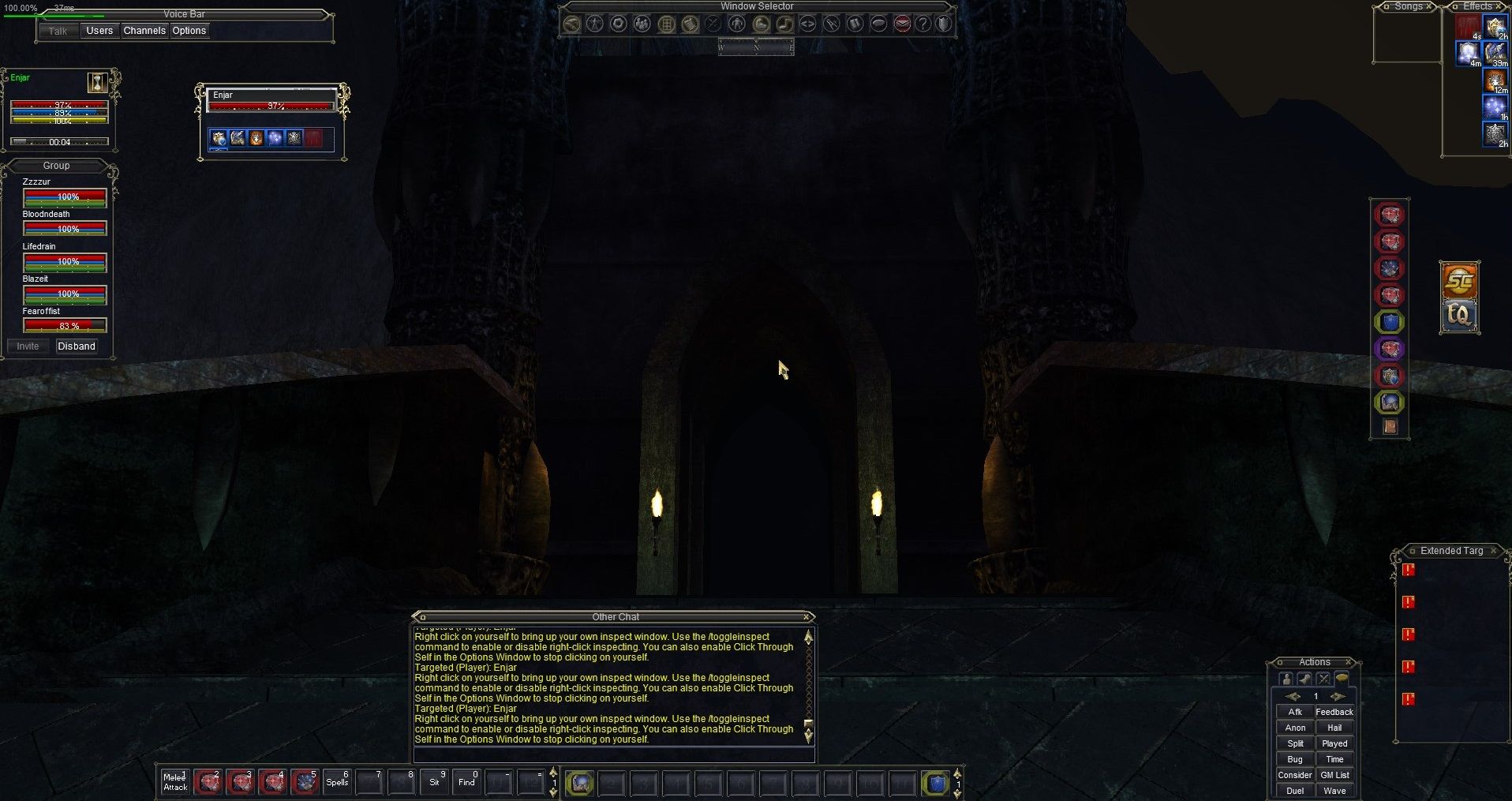 This is the entrance for the Asylum of Anguish raid. Funny enough a few people got banned back in the day when they hack killed the final boss in there. The first time it gets killed on a server a notification gets sent out I believed in WoS and perhaps other zones as well. This left a few people quite shocked as to what was going on.

Needless to say, the guild I was with at the time was robbed of the opportunity of triggering that first death on the server. I can’t recall if we got the “official” server first kill or if we were still working our way up to being number one.

Regardless you can bet a few people got banned rightfully quick when that final raid boss died. I recall it was a group of just 2 or 3 people for a 54-man raid. Yikes!

Asylum of Anguish is one of those raids I quickly grew tired of over time. Like other raids where you can’t wait for the next expansion to get some fresh content. We had beaten that place to death and then done a lot more than usual.

There are some raid-named creatures in there that drop augmentations that have stats that you can attach to certain parts in gear. If I’m not mistaken those can be killed every couple of hours or perhaps daily per person or something along those lines.

We use to start many raids as a warm-up or end raids by farming those named. Not to mention during holidays when we could not get 54 players online. Everyone needed a few of those augmentations stones. If I recall I was using them for a couple of expansions afterward as they were hard to replace. I’m sure we were still running it then as well.

Over time many realized you could just take a group or two in there and kill off those named. While you were “suppose” to report looting if you got anything to the guild to pay “DKP.” It did not take long before they decided if you looted them during non-raiding hours they should be free of charge. This place brought back memories and I’m glad I was able to revisit it yet again. It was also not going to be the only grinding session we would be doing in this zone or expansion for that matter. I still recall spending so many weekends here camped out at the cubby. People trying to train us to take the spot and all the fun that is created.