Plane of Storms ended up being a much shorter adventure than I was expecting in this zone. For how hard it was the experience just did not feel on par with what we could be getting per hour in Plane Of Nightmare. Regardless, we did some exploring before moving on.

Plane of Storms has one of the more cool-looking gateways in my opinion to get into the zone. It can be seen in this post's cover image of a giant mountain with a storm-like bubble around it. Quite cool looking at how old this game is.

To get there we had to head into a tunnel in Plane of Tranquility. Is also right before a zone I’ve been wanting to play again in for many years ago. I guess I have a bit of a reason to be in a bit of a hurry for getting decent experience. That up-and-coming zone I want to be exploring the daylights out of. 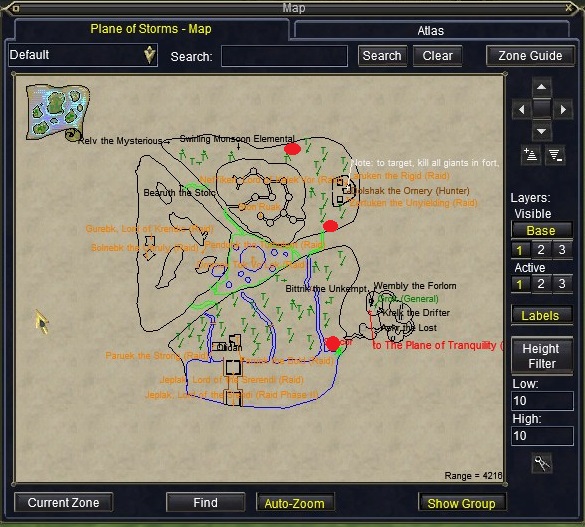 We did end up checking out a couple of different locations while in Plane of Storms that I’ve marked on the map with red circles. The zone in the area, a spot after an underwater tunnel, and a back wall to the zone itself. We never really found a decent spot for the experience that we were happy with.

The zone-in area we cleared around ended up having some bears and water creatures. Most things we found were either red or yellow. Yet the experience gains were quite poor. The tank almost died a couple of times.

At one point to get to the next part of the zone we had to clear out some water creatures. As there was a tunnel we had to take that connected the two different areas. These things were quite tough to deal with.

Over time we made it to the other side though. Since I’m dual boxing I’d rather find places I can sit one character for a while without moving. This place ended up requiring a lot of walking around with the entire group trying to find somewhere decent to set up.

We just kept clearing and moving up. There were quite a few wondering monsters that kept us on our toes for the bulk of the adventure here. There were some forts and other areas of interest we did our best to get to. Some rather nasty guards on the outside guarding those areas. We ended up wandering around for a little while. Nothing stood out as a place we wanted to set up for hours on end grinding.

In the end, this also was not the zone I was on the hunt for. I wish I could recall the name of the place. For all I know I’ve been in the zone but never made it to the spot that I recall. What I do know is we were heading back to Plane of Nightmare yet again as the experience was better there for us without so much of the struggle this place was.

This ended up being another short adventure. Sometimes you end up spending a week somewhere in this game. Other times you are more or less just passing by. With all the zones this game has you don’t always spend a lot of time in each of them if you want to see a bunch of different ones.

It is also quite interesting to see just how many raid targets there were out in the open zones. While later in the game you would end up doing a lot of instanced raiding with up to 54-man raids. In the early years of this game, everything was out in the open. If one guild killed something the entire server had to wait on the respawn for someone else. You would have guilds trying to keep raid targets on lockdown fighting with each other many times.

At some point, I might return solo to a couple of these zones and do some further scouting around. I feel like I’m missing something I was on the search for. Some of these zones feel more familiar with what I’m looking for than what we found. It could just be we did not visit a section that ended up being what I wanted to find. Granted a few of these zones kind of look similar to each other if you are not paying close enough attention.