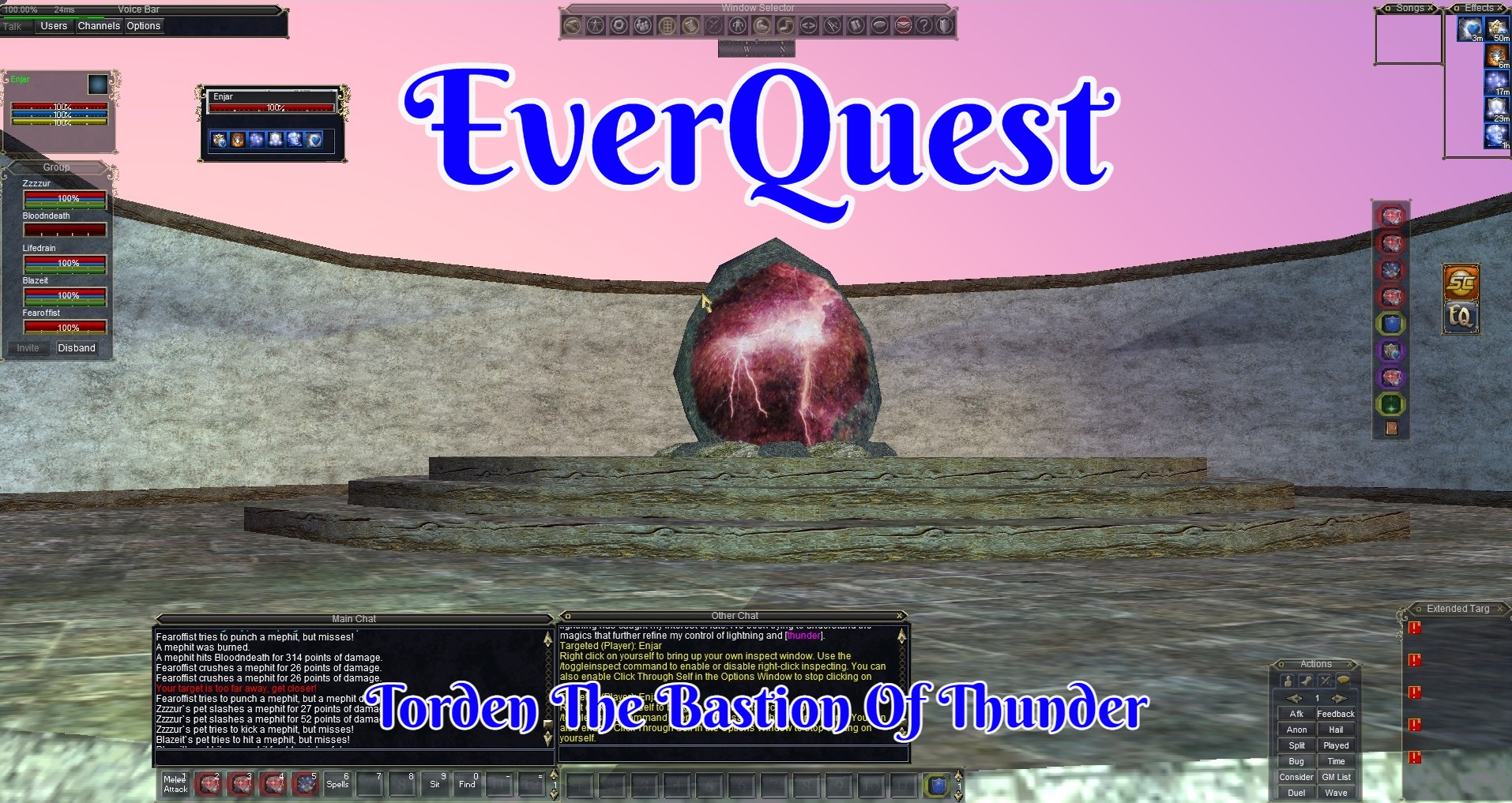 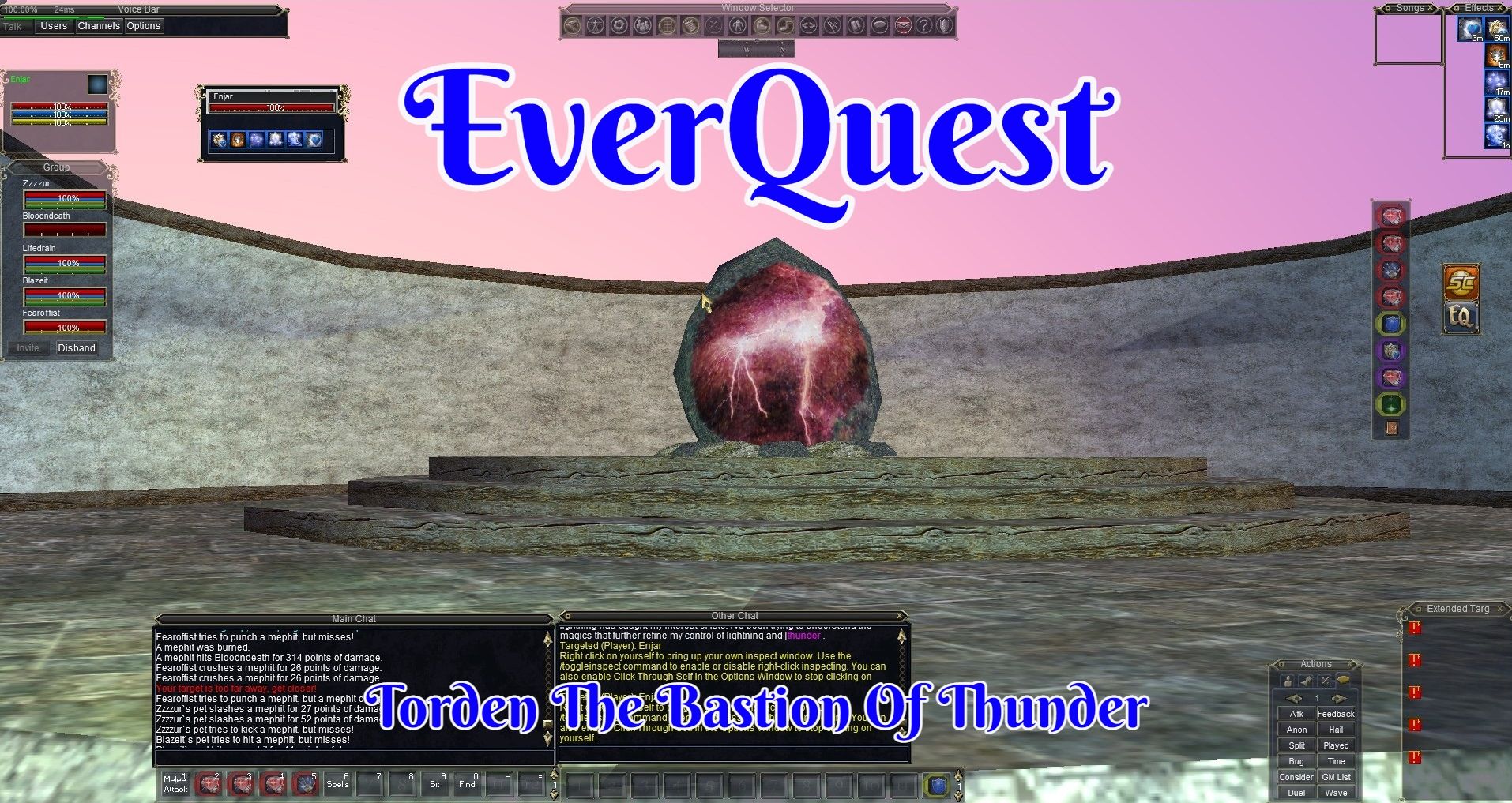 It was time to head to perhaps one of my favorite zones in the Planes of Knowledge expansion let alone the game Torden The Bastion Of Thunder. I had spent an insane amount of time here during my younger years grinding away in one of the different towers in this zone. 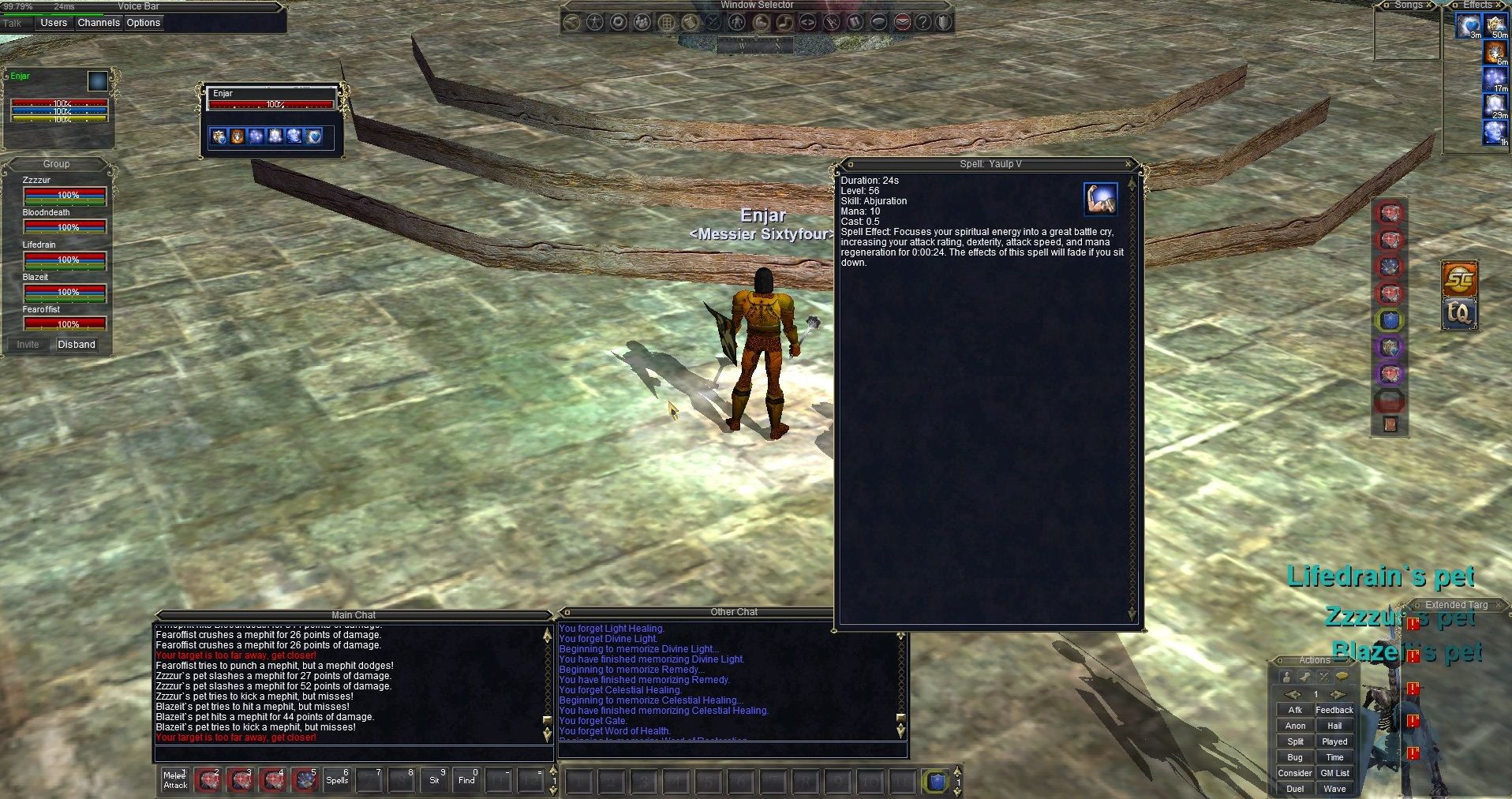 Before heading in I had quite a few spells to learn on both the characters I’m playing. One of the more important ones for me is Yaulp V as it now granted me increased mana regeneration for the 24 seconds the spell was up.

For anyone that ever played a cleric in EverQuest you know no matter what you are doing you are pressing whatever key you have assigned to Yaulp. It doesn’t matter if you are sitting in the guild hall, in the middle of combat, or just wandering around the game. You are keeping Yaulp up almost always to the point you are not even thinking about.

I can recall for years after I stop playing EverQuest I would catch myself still hitting the key I had for it. Which was not always a good thing. This is perhaps why I assign certain skills always on key 3. It was quite the habit to break. I’m not two steps inside the zone yet and I can already smell the memories. Zone in used to be quite a deadly place to hang out as people would yell TRAIN and drag it down. With the way the zone was set up, you could usually avoid getting anyone killed unless people went afk at zone in. So when things went bad that is what people did.

That usually happened after a group got their tank and healer killed. If someone was yelling train I was half expecting half a group's worth of corpses to get dropped by my feet shortly after. Even before I became a “famous” cleric people were always showing up at the camp I was at for buffs, rez, getting in on the waitlist, and so forth. 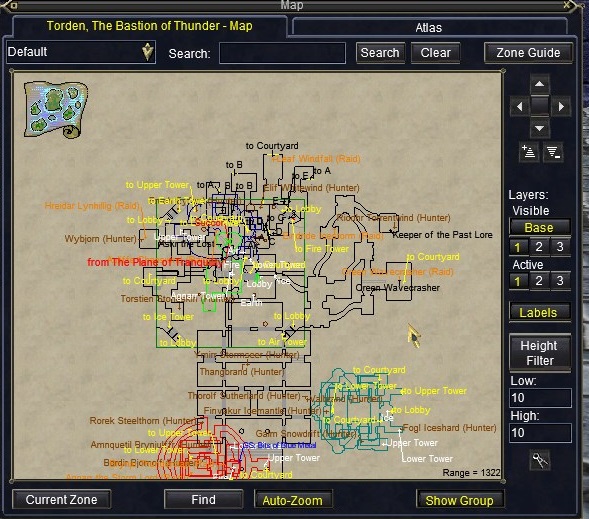 I have yet to decide if I’ll be doing individual posts for each of the different lower parts of the towers or just showing a couple of them at a time. This map has quite a lot going on in it. Including a bunch of other areas beyond what I would normally be camping at back in the day.

Naturally, we would be going to my favorite tower first –earth. I recall a friend used to come in here back in the day and they would charm one of the creatures in the middle. We would hand it mage summoned weapons and then I would heal it as the tank.

As always if we ended up getting an add it would decide it was time to break the charm and then it would try and kill us along with its tanking. Such things always kept me on my toes from my early years. Thankfully this time around I is boxing the tank so we don’t have to worry about that. 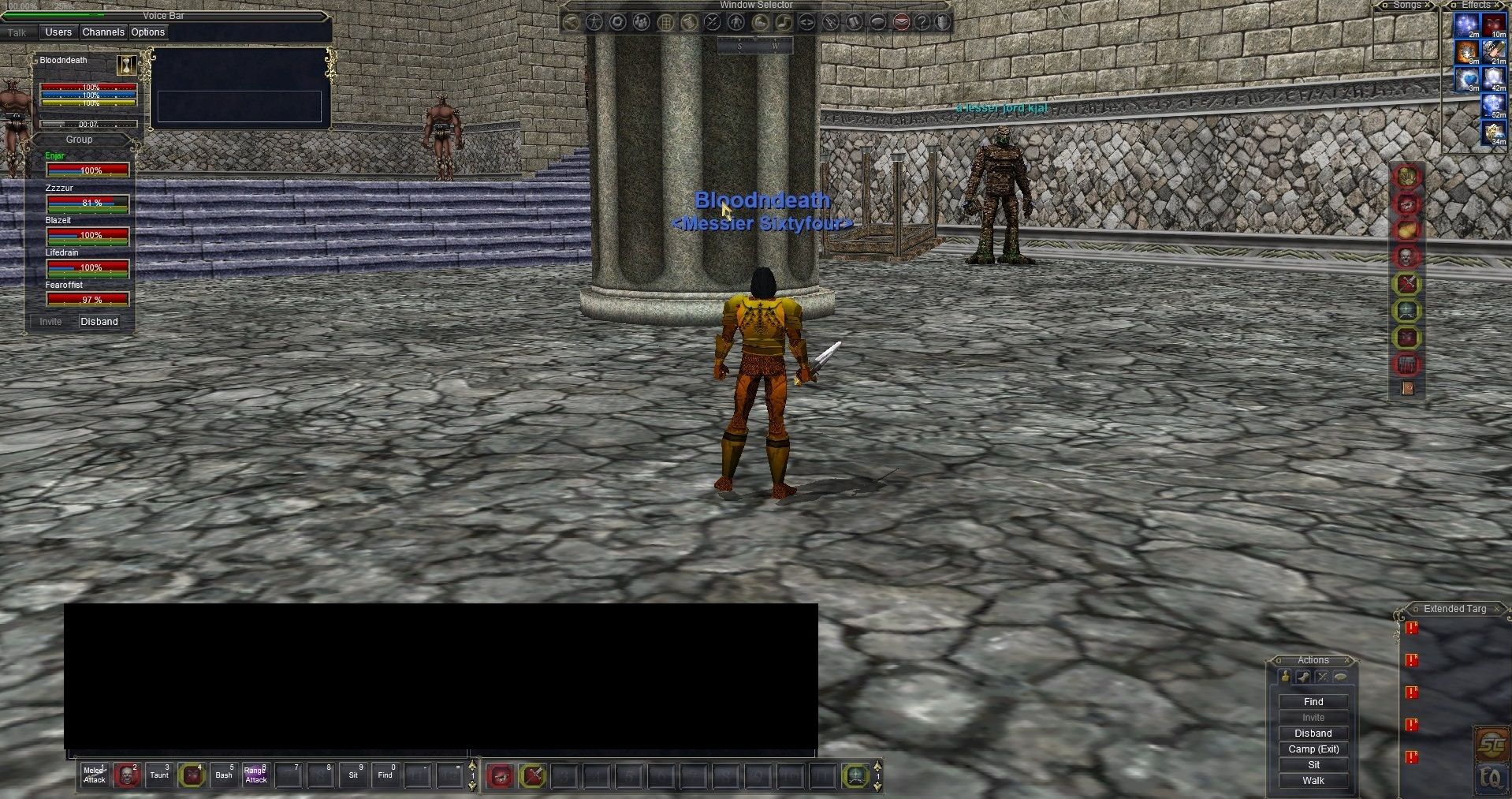 Some of these towers there are decent areas to try and camp at. While others you end up walking through them in somewhat of a circle. I use to always camp at the top or the second from the top area.

There would usually be an add we had to deal with. Which meant you could not take an afk break till after you freshly killed it. This also meant no long afk breaks otherwise the group would get pissed if it had to carry for someone while there was a waitlist. Many times if you had to afk for a long time someone else on the wait list would get invited in. Then if you came back within reason you would get swapped out with that other person. I’m sure that kind of concept sounds kind of crazy for today’s gamers of having to wait to get into a camp in a video game.

With a good group, you could clear out the first few sections of the tower without an issue. Since we have this place to ourselves we got to clear up to the camping area as a group. 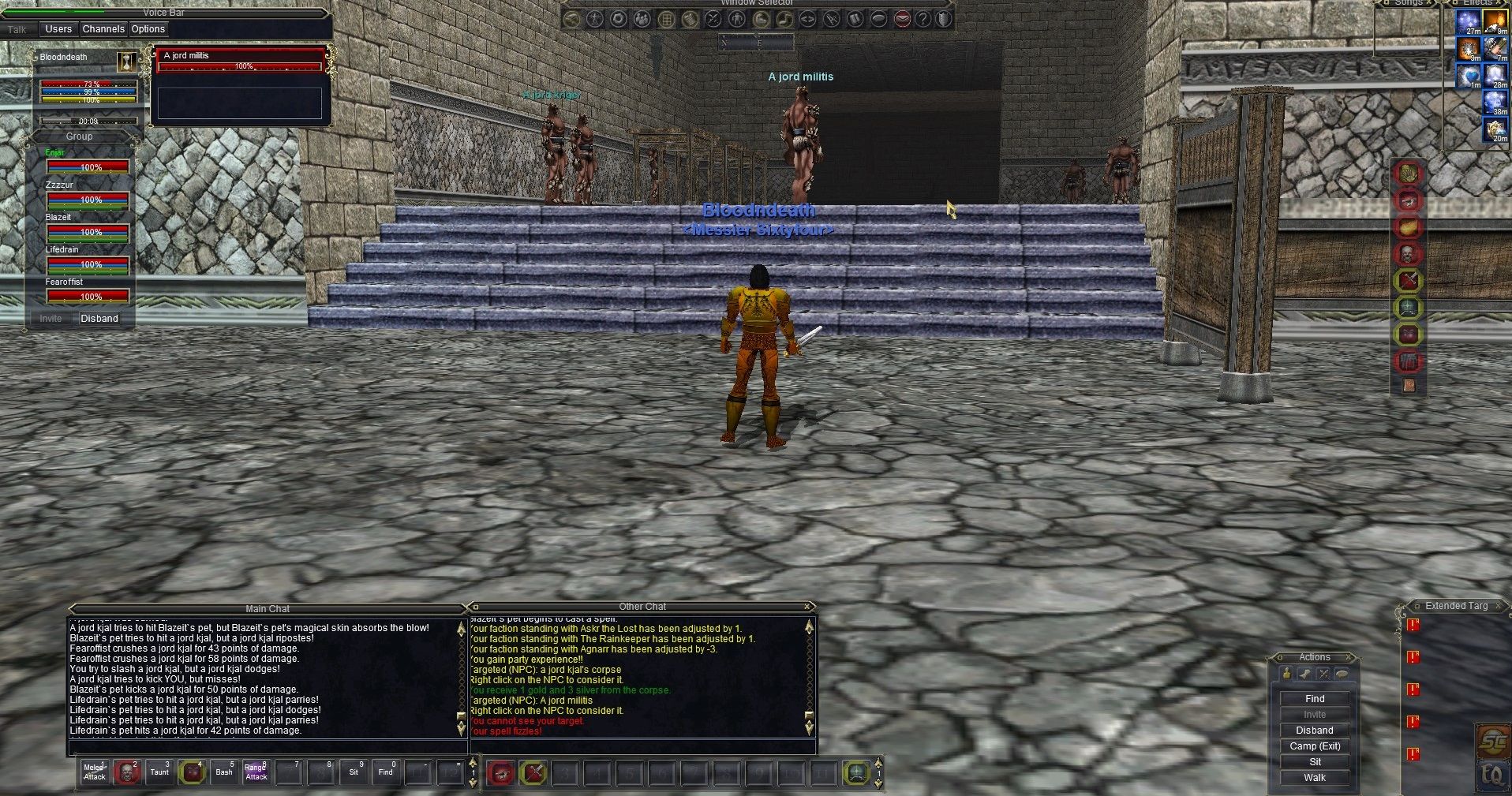 Back in the day if you were coming to replace someone the puller would try and clear a path up to the group. Otherwise, you had to do your best to get past any see invisible if there were any I don’t quite recall after all these years.

I just remember quite a few times the puller would be dragging the replacements corpse up to me to rez. For whatever reason, they did not make it up to us. Other times you would get some fool that would think they could just train 1 add to the group and they end up bringing up 5 with them. Causing quite some insane moments as we fought to stay alive not saying kind words in chat. 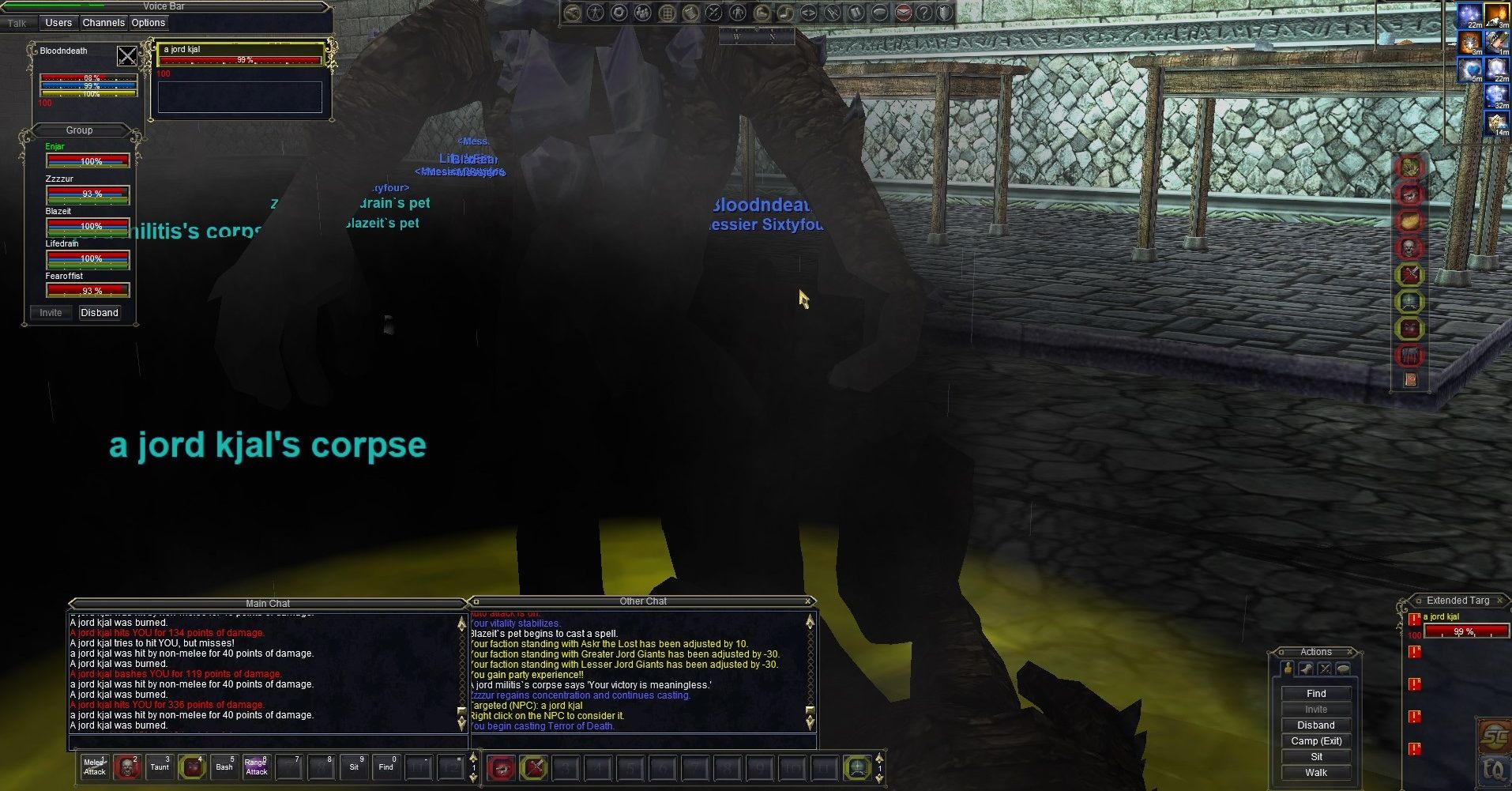 After we got done clearing we got to one of the possible spots to set up camp at. Back in the day if this zone was quite busy would not have an entire tower to yourself. Each one of the bigger areas might have ended up having a group in them.

Thankfully this time around we don’t have to wait for respawns. There are more than enough things to pull for our level. Up by those tables is also where some names can spawn. We would end up killing it a couple of times while in this tower. Up a bit further we ended up in the camp I always wanted to be at. A nice giant area where some names can spawn in the back. Lots of things to clear between us and a couple of floors. We ended up camping here for a while. I do rather miss the old-school particle system in video games. You just don’t get a screen like this anymore. It was not overly crazy with detail and a billion and one little things on screen; yet, it was more than good enough.

After sitting up there for a bit. A name has spawned down below. That is when we decided to move the group down a little bit. At the rate we were killing I was having to pull from quite the distance which was creating some issues for me. 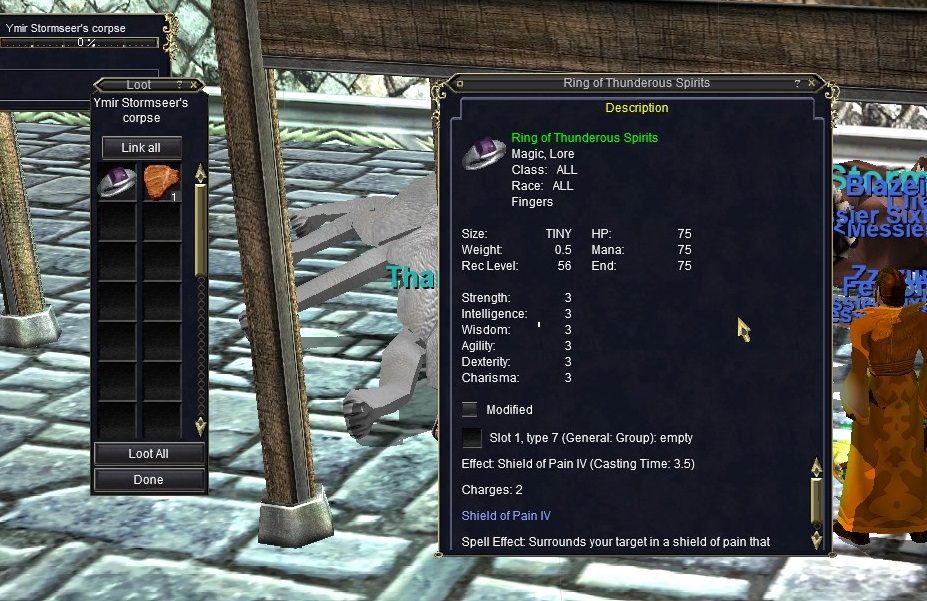 We ended up getting a ring among some other things during our time here. This ring has only two charges for the effect. I can’t quite recall if it could be recharged or not. EverQuest for me use to be all about getting the “clicklys.”

I would have so many items I could click on or use that would give me all kinds of benefits. I could get the group and myself back in the day out of all kinds of situations. That was unless everything was on cooldown then we were more than likely dead anyways.

I use to play with people where we camped over the entire weekend or holiday at a single camp. That would usually anger a lot of people who would try and train us to wipe the camp so they could “steal” it from us. So many fun times and many thanks by us for “ free experience. “Which would usually enrage people even further. 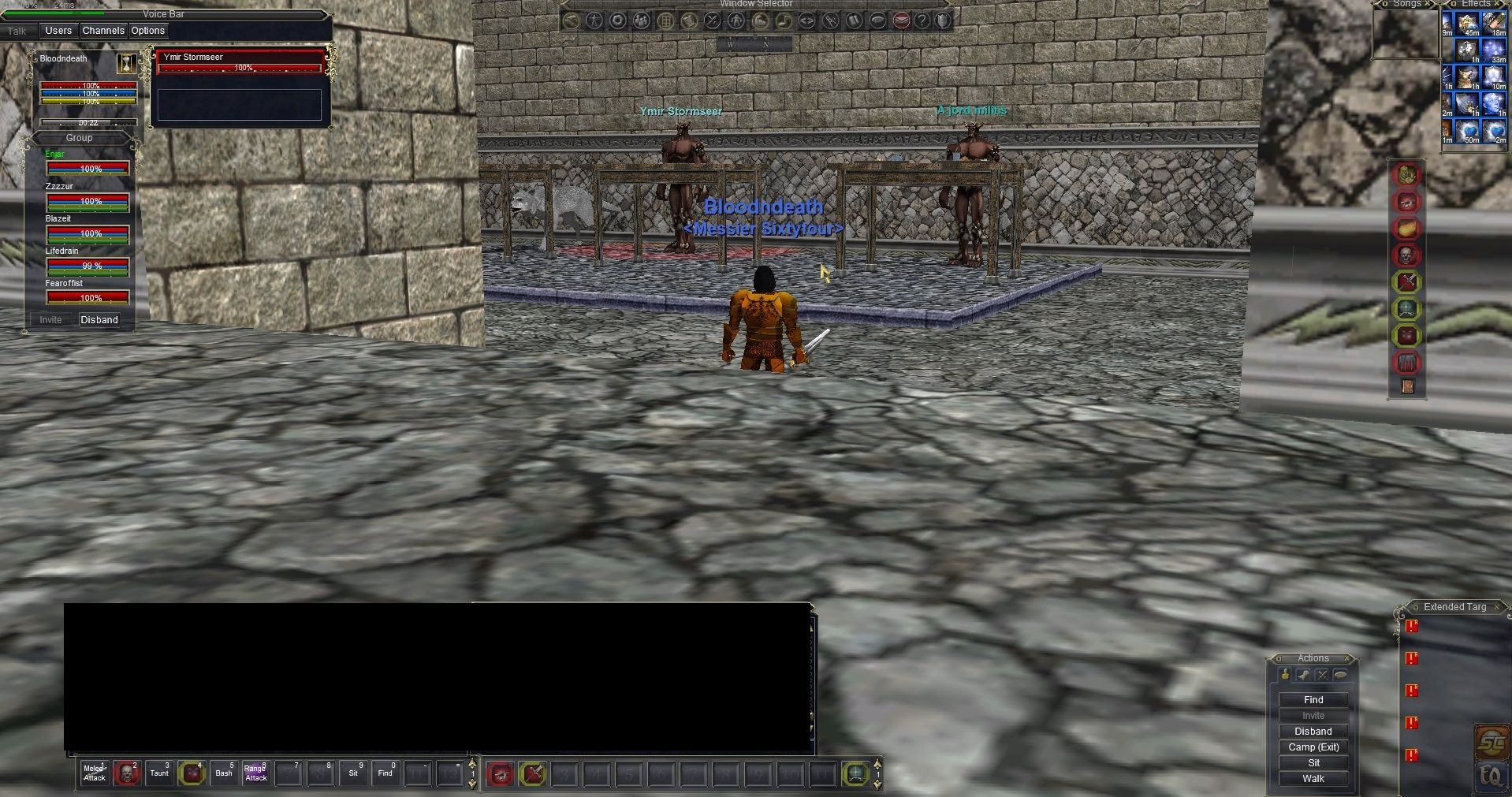 I could spend a week grinding here and not get bored. This time around I did not get to spend as much time as I would have liked. Thankfully I’ll be going back a couple of times. Hopefully, visit some of the other towers as well. That is if I’m willing to leave the earth tower.

There are a bunch of different names in this zone we want to kill. I can’t quite recall what they drop but I’m hoping to find myself some new gear. While the ring we got was nice it was not really for a cleric and at some point, I want to work on getting some old clicklys and items I use to have.

Not to mention at some point we might stop to grind some advanced ablity (AA) points. If I recall I used to grind the daylights out of here back in the day to get an AA like every hour or less back then. With how many levels there are now in the game however stopping for a long grind to work on them is not the best idea.