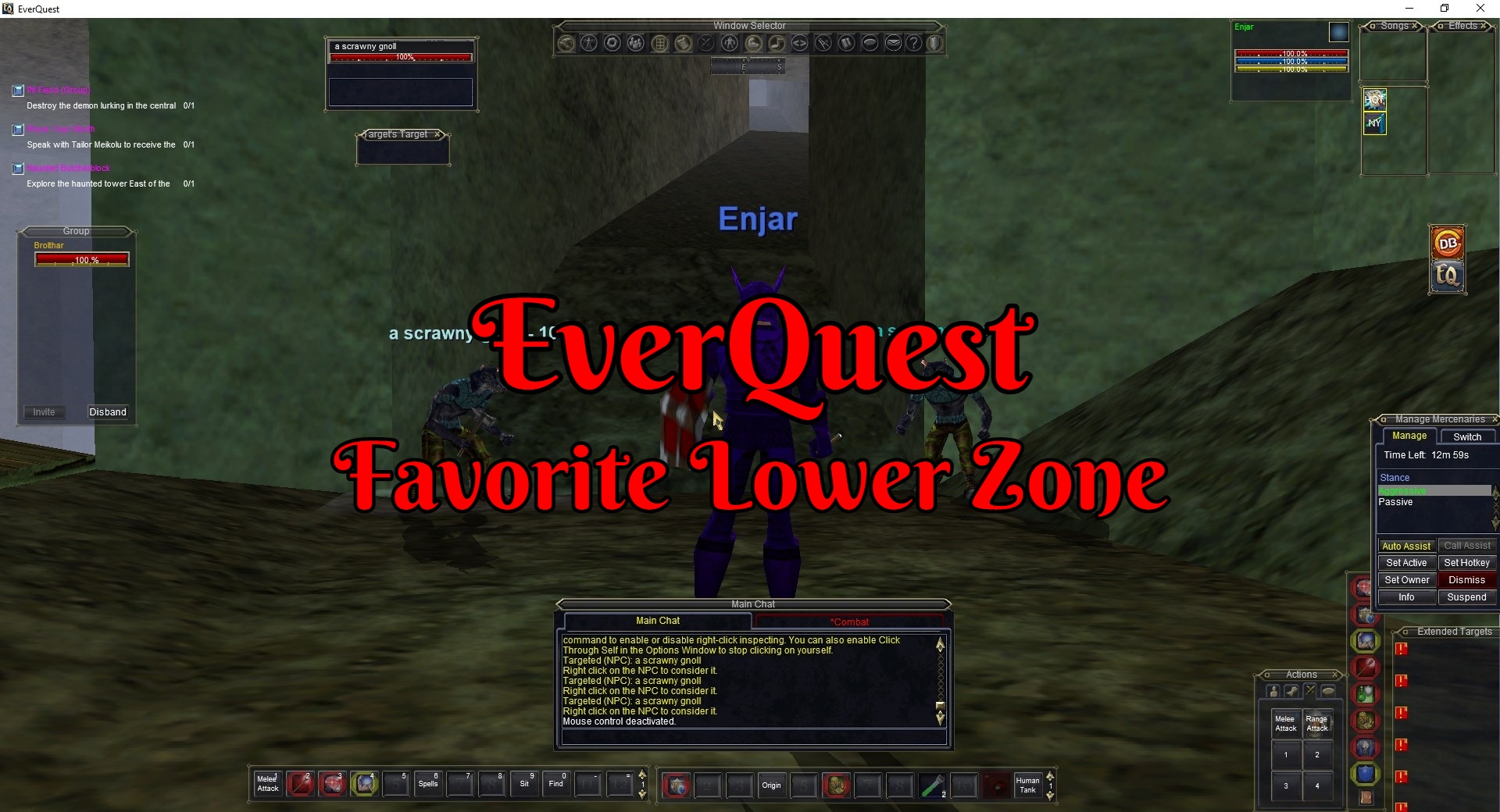 Blackburrow was a zone I spent a lot of my early days in EverQuest in. Between the many alts I made and just really enjoying camping at a few spots all day long. The zone itself had quite a few different viewpoints that changed up the grind that I just loved.

I was concerned for a moment I might not have rediscovered this zone after the passage of time and everything that I have forgotten. Thankfully in Plane of Knowledge (PoK) while trying to recall the name of this place I recalled North Qeynos.

Qeynos itself was the starting spot when I first played as a warrior before I switch to a cleric back in the day. It holds a special place in my heart as it was always just one click away from PoK. Sometimes my friends and I would just hang out there to get away from how busy PoK was back before there were things like guild halls.

After that, you would enter a zone called Qeynos Hills. I don’t recall much about this zone, to be honest. I’ve been through it so many times even without downloading a map pack off the internet. EQ is one of those games where it does not come with all the maps to the game. They are made by players. It was almost second nature to Blackburrow. Blackburrow also has quite an unforgettable entrance into it. It has a giant snake mouth for an entrance which I would assume is why this place stuck in my mind so well. It is also guarded by several lower-level gnolls that you can clear to get in. This place also has quite a fun zone layout. You have this top layer with more than enough to farm when you are at a lower level. Not too much most of the time if things got out of hand you could make for the exit. The biggest downside to this zone uses to be the massive trains that could result. As such being up here had its risks back in the day.

I was somewhat shocked I was not alone in here. At any given time there were up to four players here. Which after checking out later on the path players tend to take for leveling up I found it a bit surprising. It was at least nice not being in an empty zone. This top area is also where the high levels that use to farm here would drop all their copper coin. The copper coins were quite heavy to carry back in the day and you could make a little by just picking it up and huffing it back to the bank. The more modern EverQuest removed weight from money so that is no longer a thing.

I wish I could recall what the players use to call different “camps” in this zone but that information has long left my brain. I do know up this ramp on the shelf (and no doubt it could just be called shelf camp) had some higher level gnoll.

When you go to pull them they come in a cluster so breaking into the camp can be a bit hard. Once you have them spaced out a little bit in respawning time there would hardly be a reason to leave this camp. Unless it was time to move on for a better experience.

You also had the ramp down and some large space to go after gnolls. One thing that makes this zone and many creatures in EQ so deadly is they run away after getting low on health. This is why for non-dps classes you want some room unless you have a skill like a root and it does not fail to land. 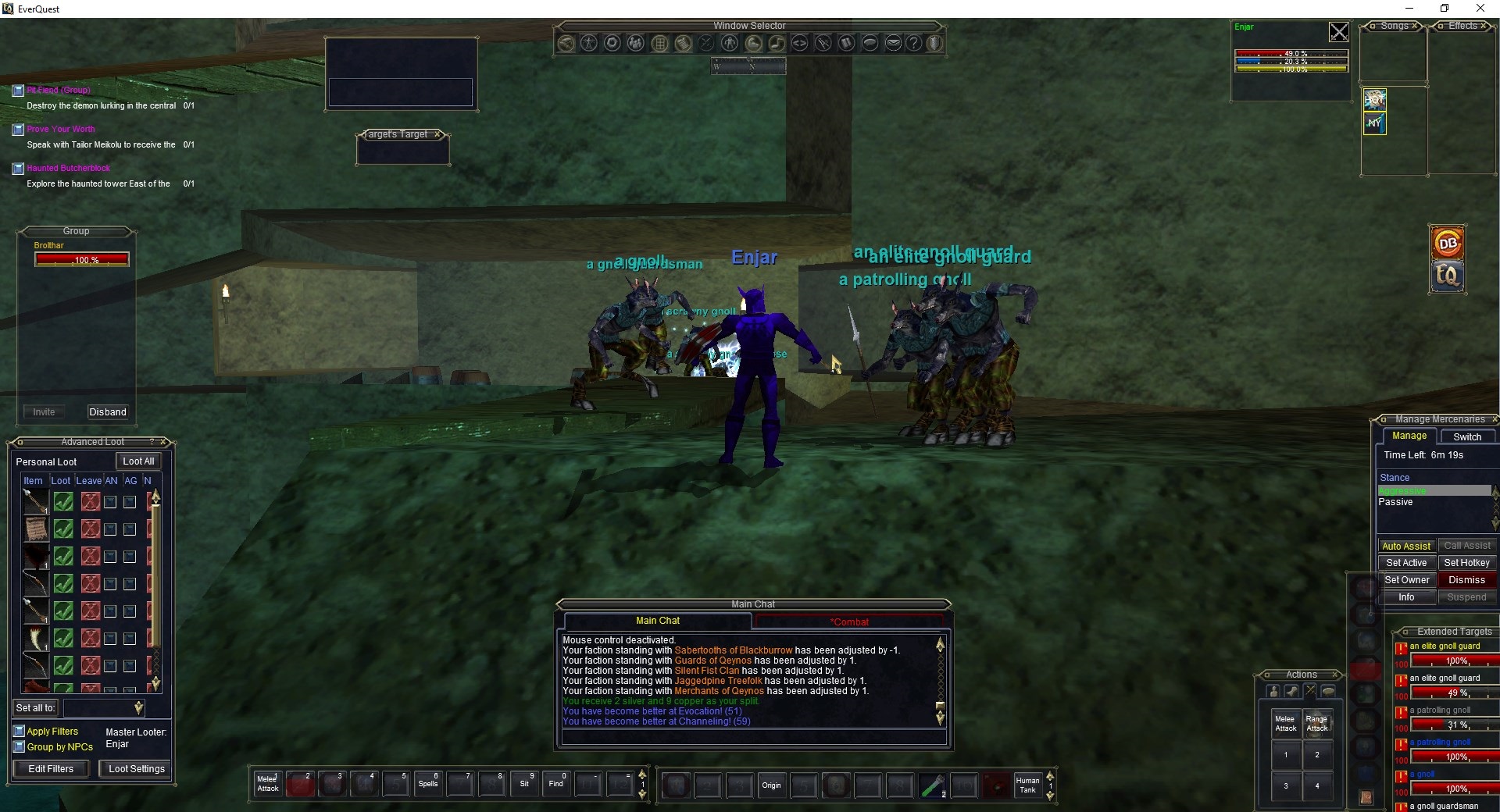 It didn’t take very long for this zone to become known best for what happens in it and part of the fun. Some gnoll’s escaped so I jumped into the water to try and stay safe. More and more of them gathered and once I crawled out they jumped me. Despite having a mercenary it was not enough.

Clerics just don’t have a lot of dps even more so at these lower levels. While a higher level and geared person would love to farm with so many gnoll’s just training and bringing back more to you. It was time to make some changes.

I went back and started over again this time as a Necromancer. I went through the basic leveling zone as the cleric. I then ran him up to Blackburrow for some revenge and to go deeper into this zone. That was after all the point of coming here was to relive some of my old spots.

Things with a necromancer were much better. I could drop a bunch of damage over time(dots) and even if they wanted to run away if I didn’t slow down their movement speed they would be taken care of. 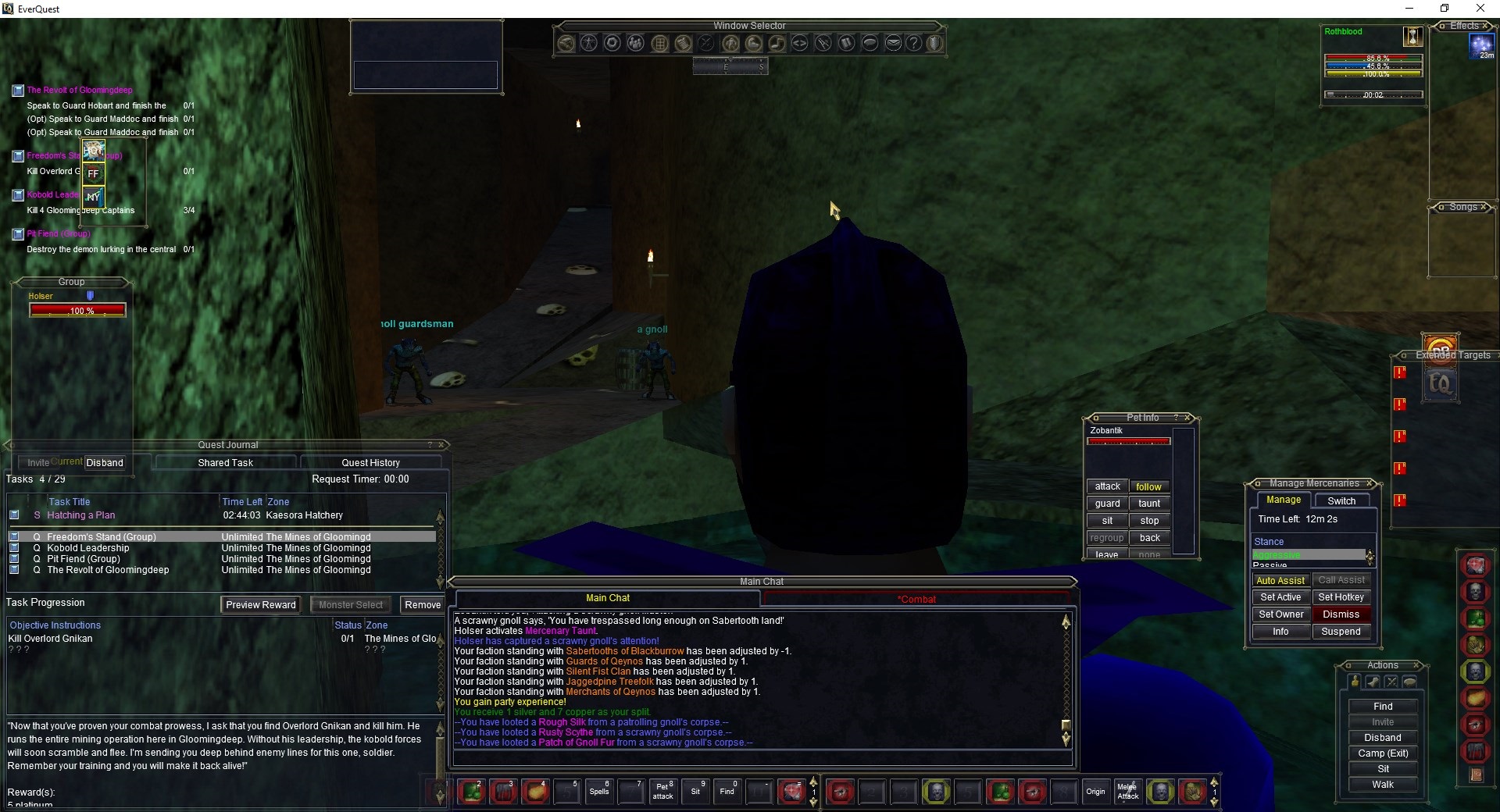 This was on the way to going to what I called the “backdoor.” There is a river in the zone that you follow down to a dead end. This has a couple of guardsmen to clear out and some other stuff for fun. They're also not much for them to interact with if they get away.

After that, you jump into the water and dive down. There would be an opening that took you into an area with a ladder. Ladders back then were something else and even nowadays it seems they are not improved. They are quite easy to fall off and I failed several times trying to get up it. 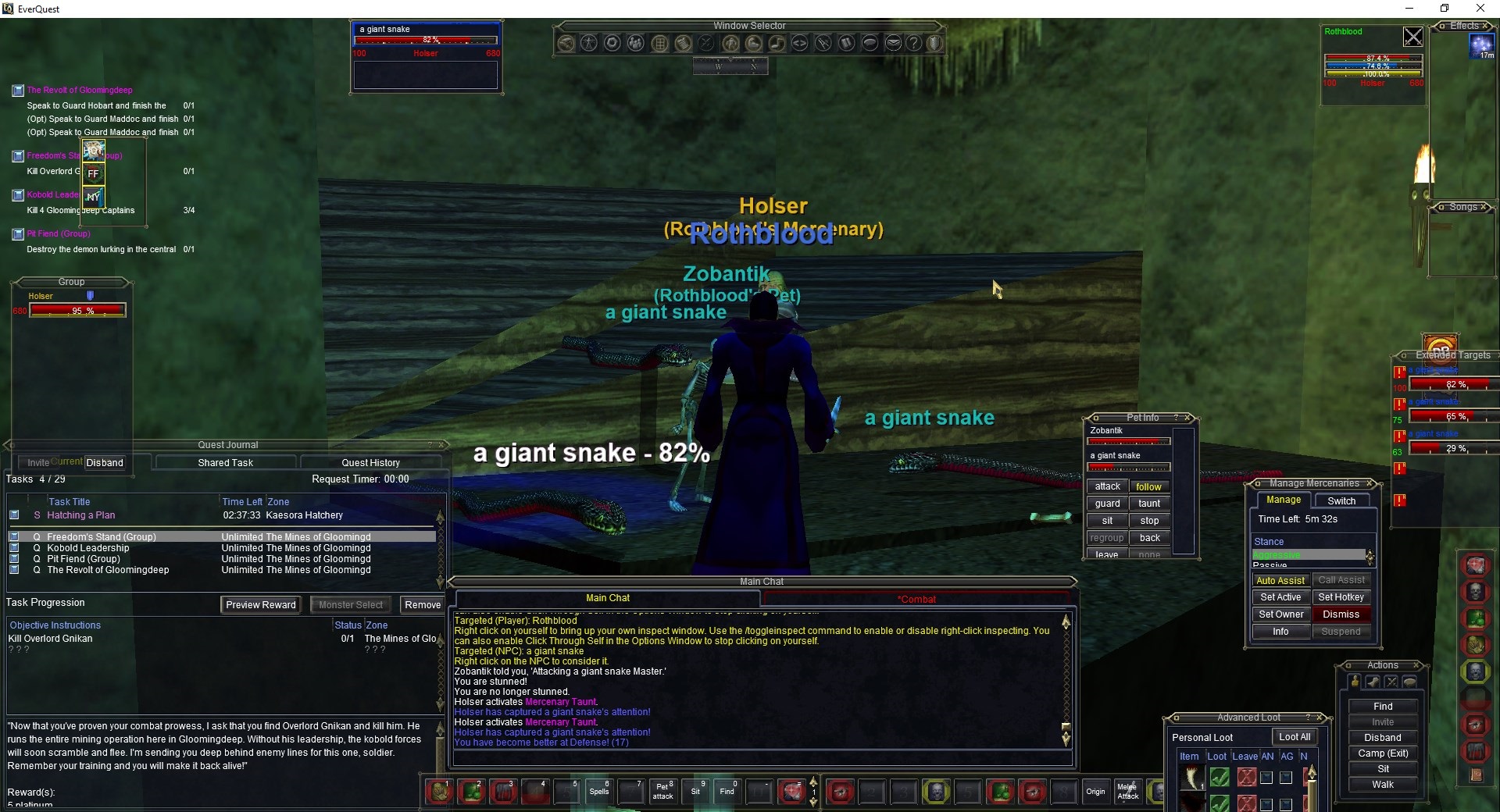 That leads you into this snake pit. For a few levels as well they are quite a nice experience to farm. Once I cleared them off I would run up and take out a couple of gnoll at the top. Once that was done I would run back here and sit to regen mana and wait for the next respawn.

This was quite an out of the way area unless a player was going to it to farm it you often got left alone. Back in the day if someone had half the zone after them and were trying to escape they would be spamming on zone chat to move out of the way. Well, you did not need to worry about that here people did not risk trying to escape this way and took the front door into this area instead. 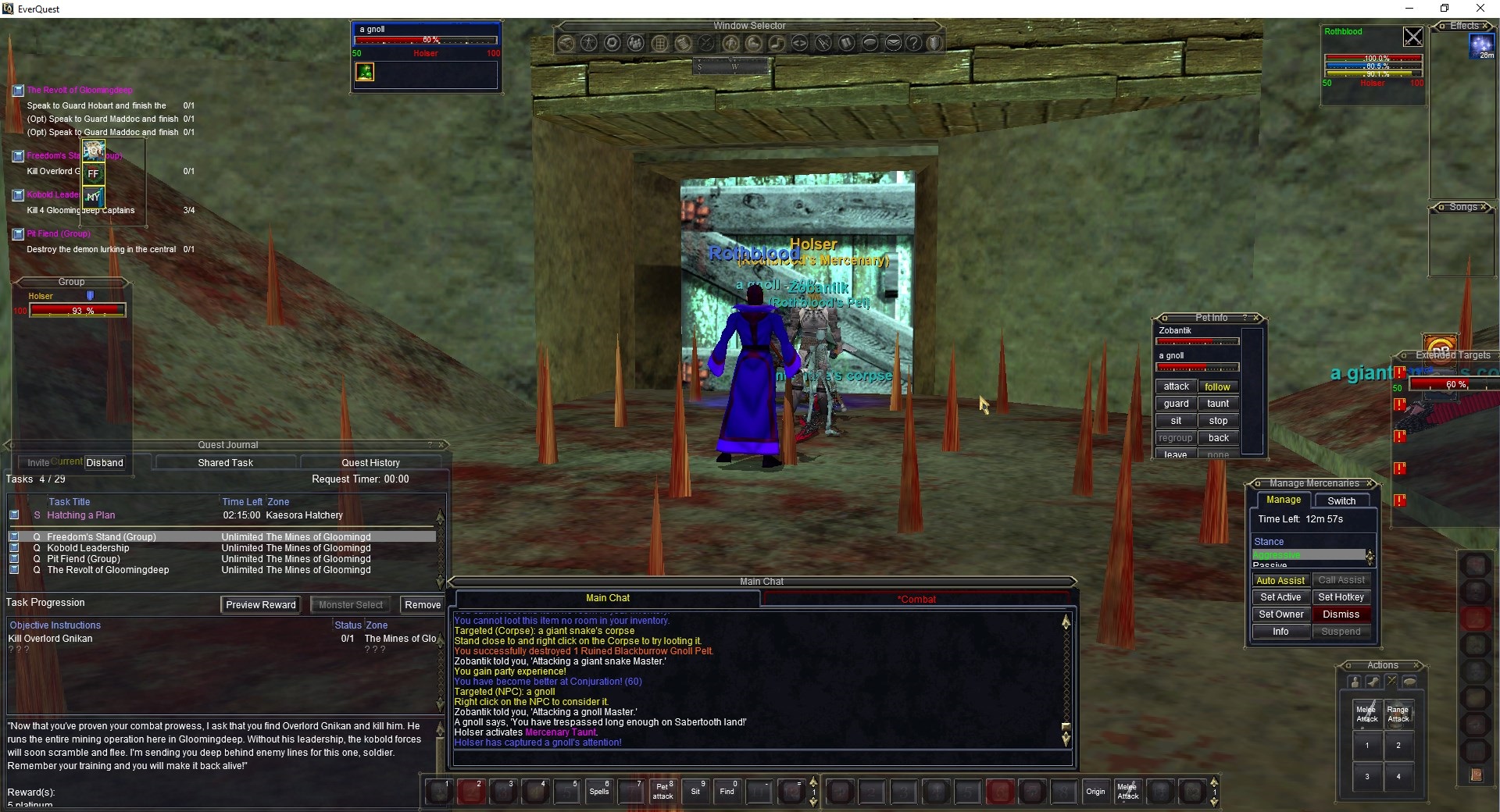 After that, you had quite a large back section of this zone with a lot of different places to go to. If you had the zone to yourself and some decent dps you often find yourself going between this juncture. It is quite memorable with the bloody spikes and all. Not to mention a name could spawn show up here as well that you have to be careful of.

There is one tricky spot in this area and that is the door you see in the above screenshot. That is not the door I came into. It will not open. What will happen though is gnolls can walk right past it like it was not there. That could put you in quite the pickle since you got a little run to catch back up to them if you can’t nuke them in time.

The necromancer was a much better choice than a cleric here and the mercenary helped a lot as well. I did get killed a couple of times when I had six or more gnoll’s on me at once and just could not get any dots on them to save my life. 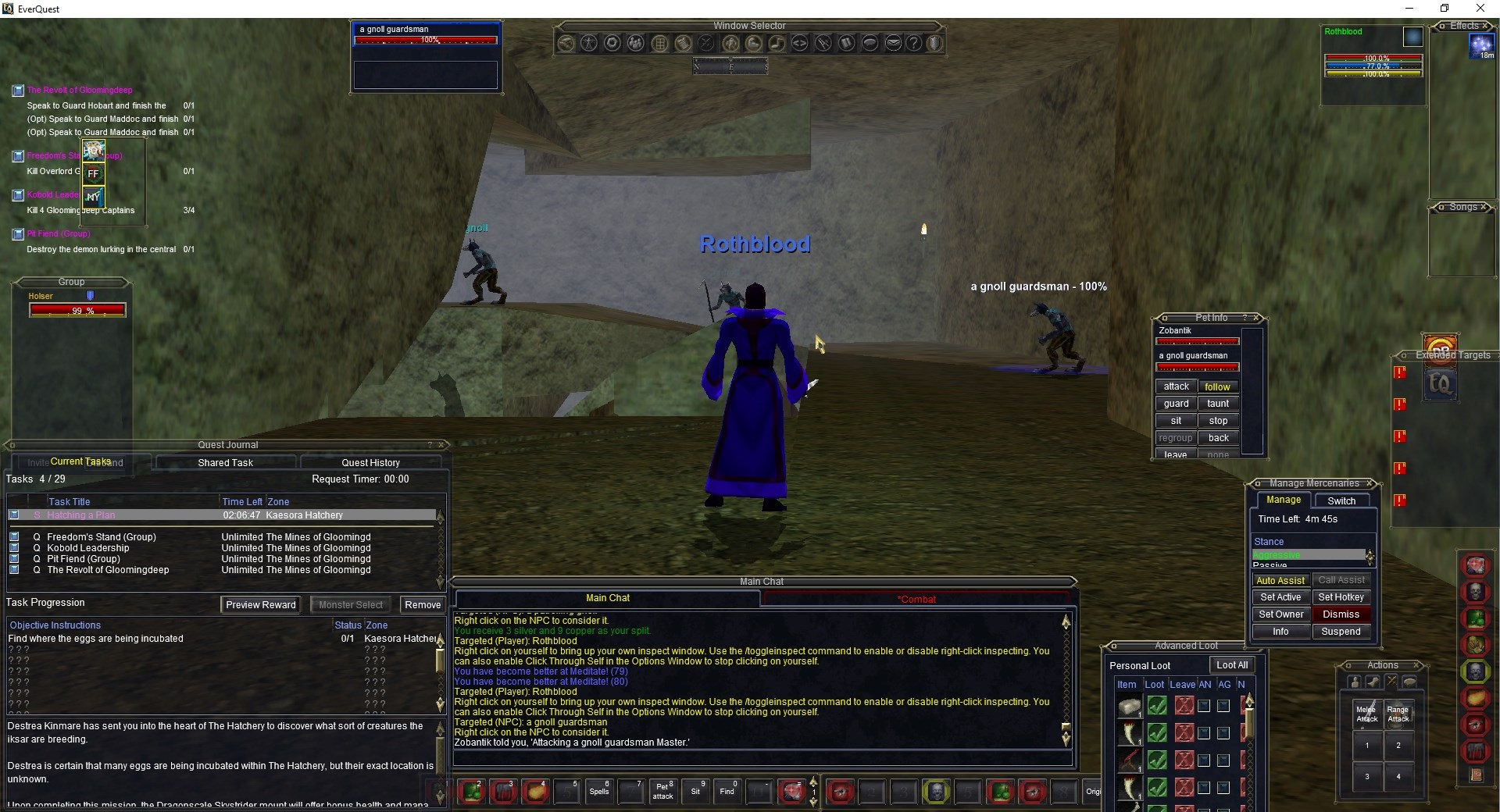 After a while, most gnoll’s in this zone turned a light blue denoting that the experience was starting to not be worth my time. After many trains, lots of killing, and my bags so full I was dumping stuff on the ground it was time to say goodbye to Blackburrow.

So many past adventures solo or with random strangers were had in this zone. It’s still to this day something that comes to mind if I think about the game. Oddly enough I even meet some long term friends in the game here first. We would go our separate ways to only months later meet again and build our friendship further from there for years and adventures to come.

Screenshots were taken and content was written by @Enjar. Screenshots are from Everquest.