As they say, let the bodies hit the floooooooorrrrrrrrrrrrrrrrrrr. Kurn’s Tower is an undead haven that many with special spells for undead tend to go to for soloing. I however am not here to solo and our bags were waiting to be filled with loot.

Before even getting to Kurn’s Tower we first had to get there. For anyone that has ever played EverQuest you know that can sometimes be the biggest battle of them all. Thankfully it was not a long journey and if anything should happen there might be a chance for survival.

The first thing was getting to the Plane of Knowledge. This zone is a mega-hub for getting around. There are a lot of stones you can click on to go elsewhere. If I was in a guild I would have even more options to get around the massive game. I am however not.

Leaving Mines Of Gloomingdeep would result in the group getting split up. While Crescent Reach could have been selected as the starting zone depending on which selections you made at character creation. I’ve never found that fun.

I am however playing two human characters so they did not end up far from each other. The shadow knight was a bit more challenging since he ended up in some sewer-looking place I forget the name of. Thankfully I have amazing maps I’ve downloaded. While it helped a little bit to have been there before that was well over 10 years ago if not longer. 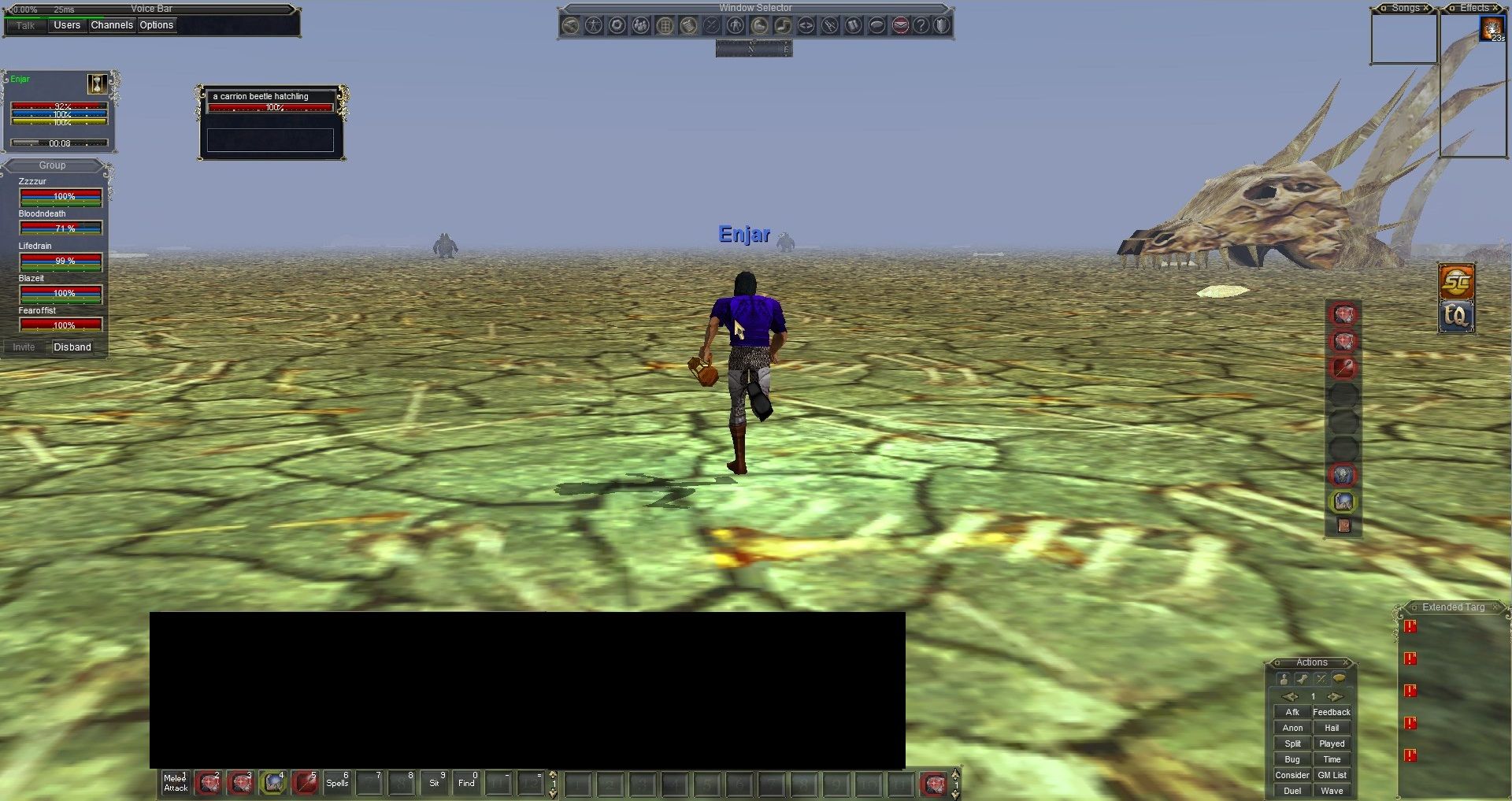 The challenging part of the journey started when we arrived in Field Of Bones. Kurn’s Tower is somewhat in the middle of this map. There are red and yellow creatures we had to avoid to get there. This place was a bit high level for us. I ended up attempting to take a shortcut straight through the zone which lead down into a nasty pit. While there are a couple of exits out of that pit I did not feel like tempting fate. Sometimes the fastest way to get somewhere is a long way around. Instead of taking the red line as I had planned, I ended up going the blue line route.

After only a fight or two that ended up breaking out, we arrived at the tower. Since I’m dual boxing I had one of the characters on auto-follow. Auto-follow in this game blows and that ended up causing some troubles along the way. Mostly up the ramp into the inside of the tower. 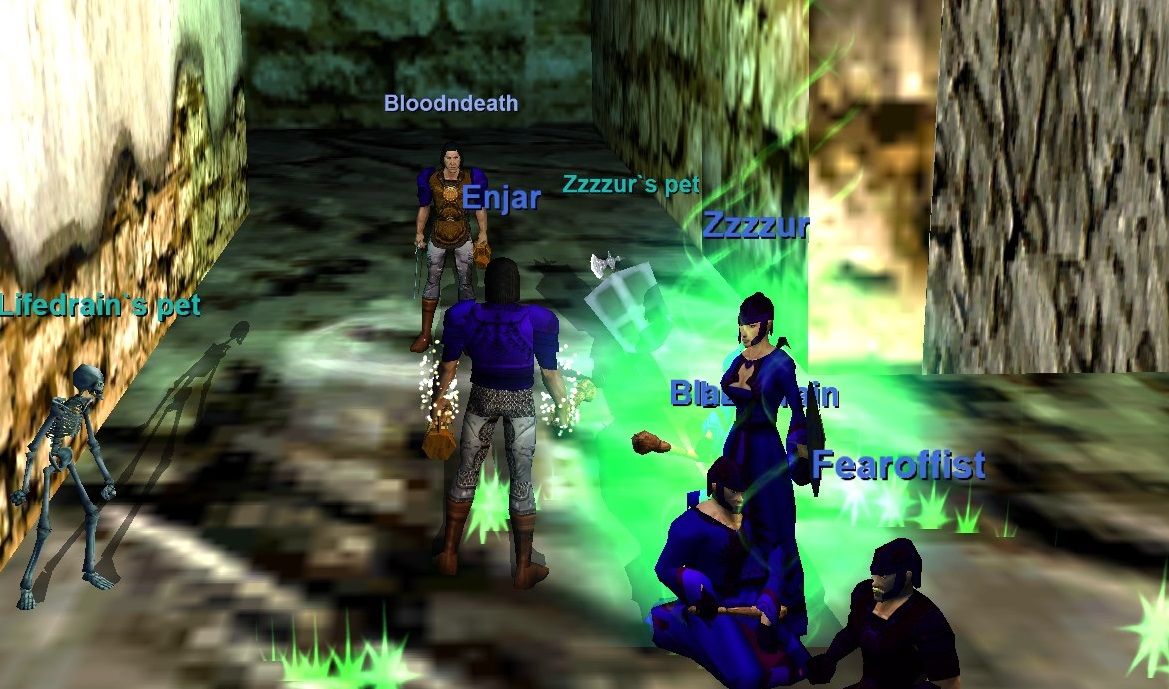 Before heading in we took a moment to buff up and change out some spells. I was a bit poor and did not check the spell vendor in Plane of Knowledge if I had any further spells I could get. Whatever I had bought in Mines Of Gloomingdeep would have to do for the time being.

While I believe I’ve been to Kurn’s Tower before. It was never as the puller. It was also so long ago I don’t recall much of the zone at all. So it took some exploring around while I was pulling monsters to the group to get a hang of the place.

I’m not sure where people usually camp in this zone. Just out of safety at the start, we sat right at zone in. The place was empty so we did not need to worry about trains. The group could sit in a spot that would not get any respawns on them. This also gave us lots of time for mana and other breaks when needed. While we were there quite a few upgrades were looted. Crude Defiant gear at this level feels quite powerful. It’s a shame I did not get two full sets for both my characters. However, the cleric and the shadow knight share the same plate gear. So leather and other types that were dropping went elsewhere.

Quite a few of the pulls I made turned into giant rounds of madness. I’m still trying to get used to being the puller and tank. I also did not have some spells and skills that I’m used to using when splitting a pull on a shadow. Thankfully that was not much of an issue for this group.

After some levels, we ended up clearing most of the first floor of the tower before respawns. After some time, however, the yellow monsters turned into blue and in some cases grey giving zero experience in killing them. It was time to go deeper.

The next floor up did not fit our needs. While we did stay on one end of the stairs with plans to pull experience rewarding creatures from the floor below and what was on this floor. There were quite some large areas that seemed like it is perfect if you wanted to kite up here. However, will a full group we made quick work of the small number of spawns here.

We ended up moving up to the stairway on the other side of the floor. About two-thirds the way up it left us out of range getting respawns on the next floor upon us. While still making it quite easy to pull the spawns on the floor below.

I kind of wish we had moved to this location sooner. It just felt odd camping on the stairwell. It however worked for us for a while. I just had to get used to pulling to such a strange location.

This floor had a lot of tiny rooms on it. Sometimes the creatures in those rooms would aggression through the walls. Other times I had to head inside the rooms to pull.

Thankfully we did not care much about getting adds here. It was kind of preferred as it allowed the group to go on a mana break while waiting on respawns. Thankfully I knew playing as the cleric could take a few hits when he got aggression on adds from healing other members of the party.

I attempted my best to pull any adds that ended up on the cleric off him. That however did not always go as planned. Thankfully the cleric would, later on, get a healing over time spell which gives you less aggression when healing. This would allow me to heal the tank when they get back and “mostly” be safe about doing it. Unless they needed a bit of heal which is how some of those pulls would go.

I was also on the scout out for another place to move into. There were two different stairwells in this area. One led up to a smaller area that seemed to have around the same level of creatures that might have been slightly higher. The other must have been the highest undead for the most part in the zone.

I do know the tower has a basement. While I did quickly check it out. It appears to have mostly non-undead. Since this party was set up for killing the undead I decided to not mess with those monsters.

The final camping spot was on yet another stairwell. We ended up stacking the corpses high here as if they were logs for a wood pile. The bags were getting full and there are quite a few quest drops in this zone that we have no clue about. They were left to rot.

The amount of detail in random rooms in a game can often be fun to take look at. This one quite stood out a lot due to the walls and there is some furniture in it. Since an odd mole was nonaggressive I left him alone. I have no clue what kind of faction hits if any you might get for killing them and sometimes it’s just best not to find out.

With the group on the stairwell, I was able to access quite a lot of areas to pull from. Outside of getting stunned or lost a couple of times. I never felt like I was in danger of getting the shadow knight killed or the group. The cleric could always just heal everyone up. It will be even better once I get some group healing spells.

We ended up overstaying for quite a while in this zone. At some point, the experience started to move so slow or not at all that it was time to go off and find another zone to level up. Our bags were also overflowing with loot. Thankfully now I can afford to go on a massive spell-buying spree for both characters.