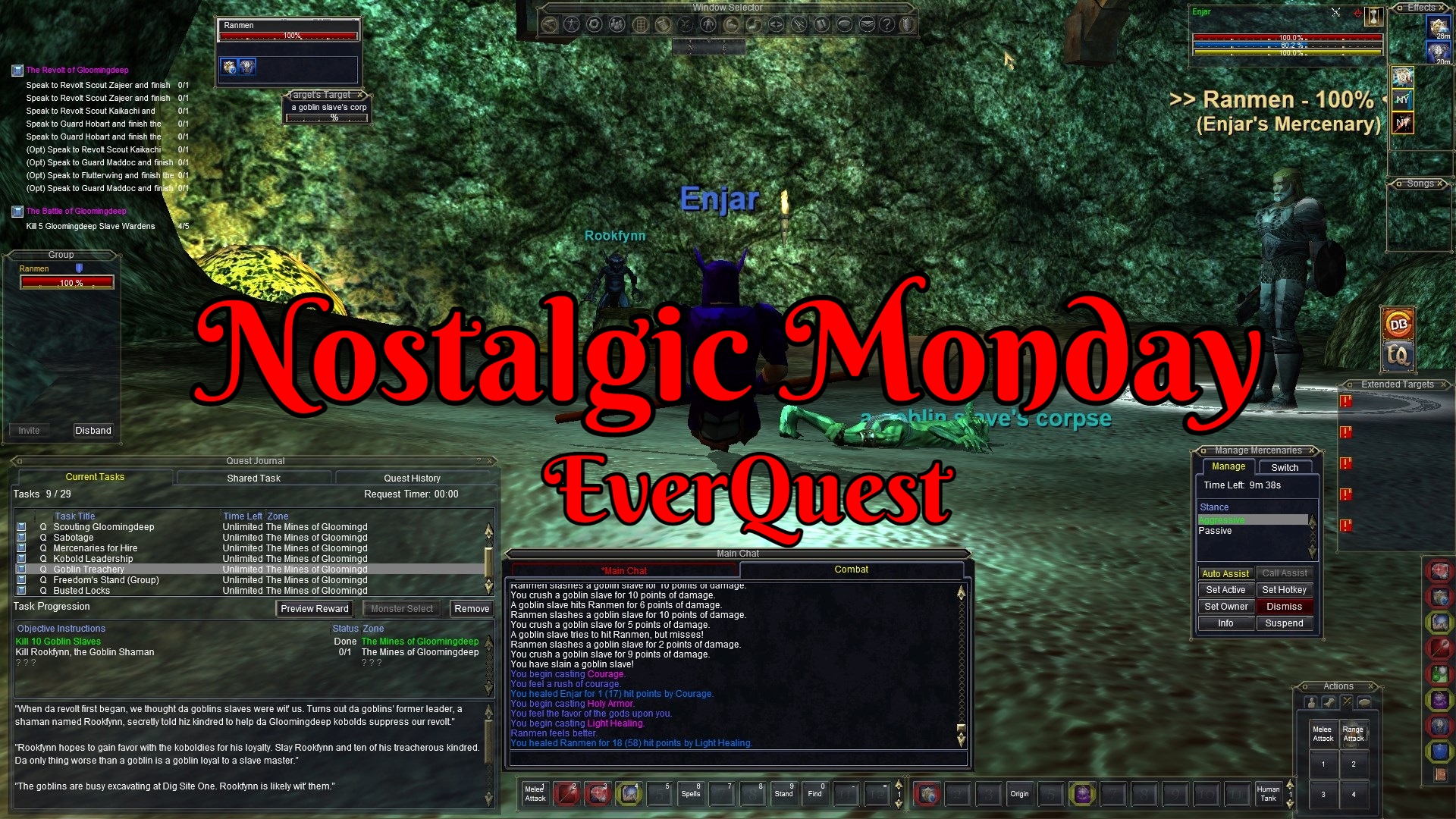 I am somewhat shocked this game is still up and running no less as a free-to-play title now. This was my favorite of all time MMO from back when I use to have the kind of time to play these sorts of games. Despite how much I use to play over quite a few years I’ve rarely talked about it.

I thought it would be fun to jump in on a new account and just go through the noob tutorial zone. It is doubtful I’ll be playing this more than that but I have been feeling nostalgic to play it again for a while.

I thought it might also be fun to see how this game is going now as free-to-play. Can you enjoy this game as one or are they going try and milk you for every cent you have? I think that should be somewhat apparent after playing for a couple of hours. 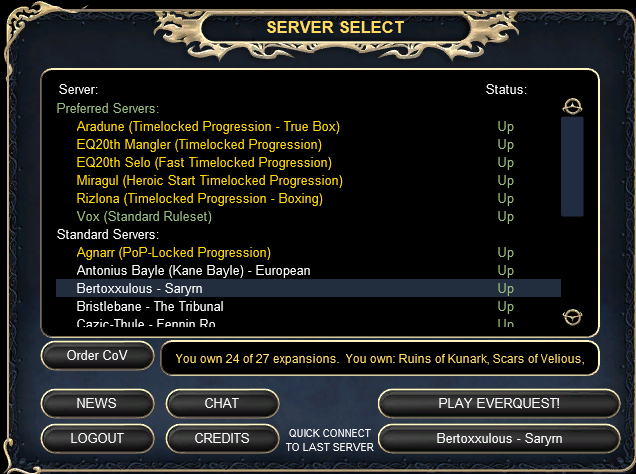 As far as servers go I just picked one at random for the most part. I was not looking to try and find if my old one was still around or what it merged into. While I had a lot of fun years back in the day being in the top raiding guild on the server I was on. I’m not that interested in discovering how things ended up for them. As with any game, you devote so much time playing with people daily for years. Once you drift away you tend to just move on and some people don’t handle it well.

I ended up picking Bertoxxulous as a server to now call home. There were more servers than I was expecting with how old this game is. Some were as expected locked behind a paywall and those were mostly special event servers. I also avoided joining PvP or anything else that denoted it was different than just a standard server.

This game now has 27 expansions with the latest one costing between $34.99 to $249.99 depending on the type you want. You at least get 24 of the expansions for free and unlock them all if you purchase the latest one. The latest expansion Claws of Veeshan also just came out back in December. It seems the game now focuses on the December content release. That is great to see there is still development going on. 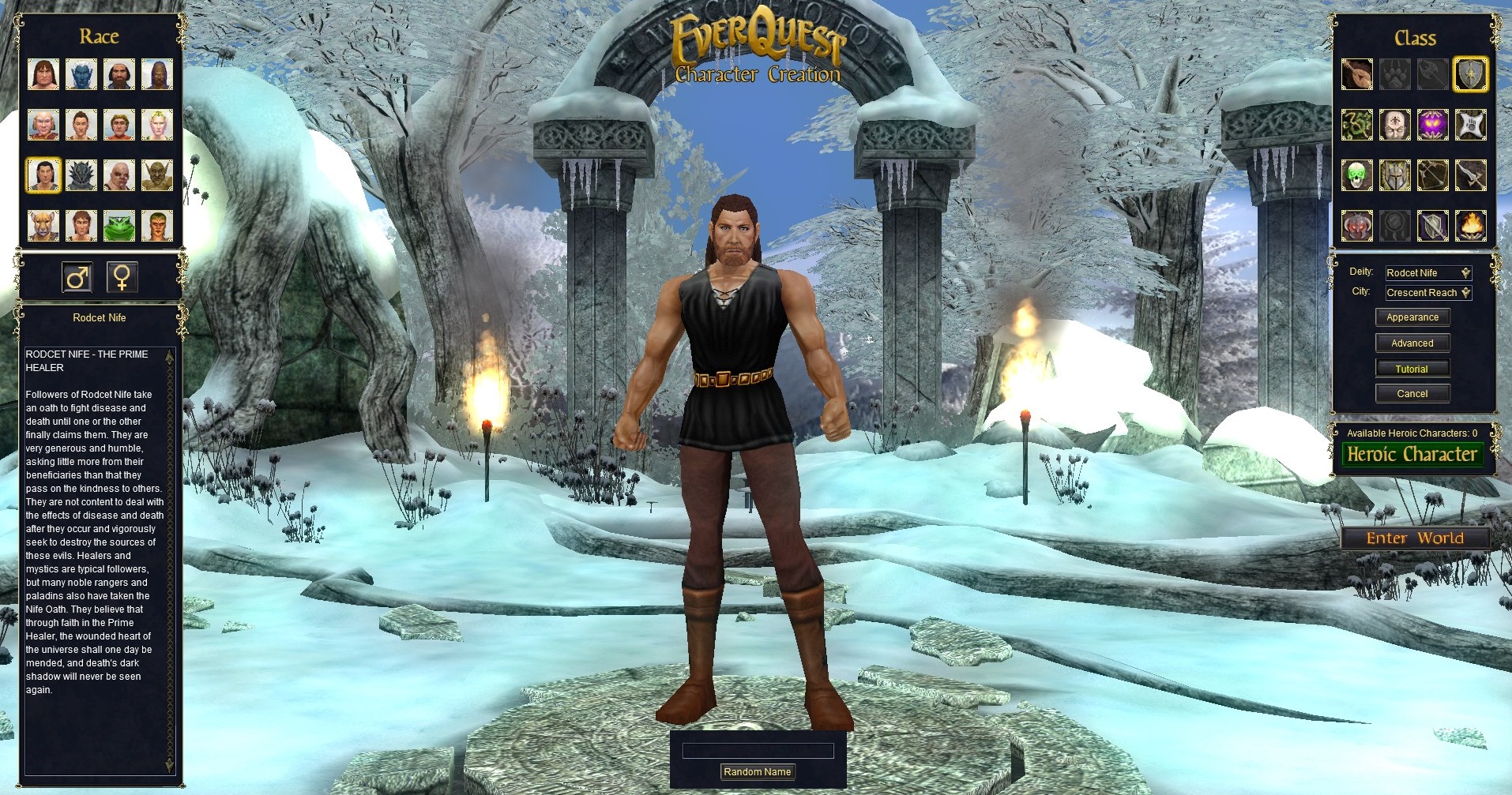 The class that ended up being my main back in the day was a cleric. I loved the depth and just all the options you had at healing with a few fun spells for combat as well. Since playing this game I never enjoyed playing the role of a healer in any other game. As they simply could not live up to my experience in this one to the point they were let down and just not fun to play. One of the biggest things you might notice about this game and I sure will not forget is how cluttered your screen becomes. I recall back in the day having many windows open for chat and you could hardly see anything else going on in the game. I did take a moment trying to find a layout I could enjoy but I gave up and just left it a mess.

The first part of this tutorial zone (Mines of Gloomingdeep) is just talking with a bunch of NPCs to learn about the game after a short little intro and combat. While this was not in when I first started playing the game back in the day it was when I quit. I use to find it somewhat fun to see how fast I could get through the zone and had some items for my character waiting so I would not look like a noob.

After that, it was time to run off on quite a few killing quests. The classic goes kill a couple of rats, bats, and break open some sacks can’t be forgotten. My cleric himself just being armed with a wooden plank was quite a slow killer at the start. I’m shocked the rats did not just leave out of boredom but I evenly got the job done.

Thankfully you can hire a mercenary. Playing as a free-to-play the better tier and quality are locked behind having a monthly subscription for $14.99 a month from the looks of it. This for how old this game is that just feels a bit insane to be paying per month. Nonetheless being a main healer any meat shield will do even if they are bad I’ll keep it alive.

My tank mercenary was sadly the worst kind of tank-- a coward. If things got dicey he often just ran away to get out of combat and left me with the mess. Being a cleric we should have won every battle if he would have just kept fighting as we would have been fine. 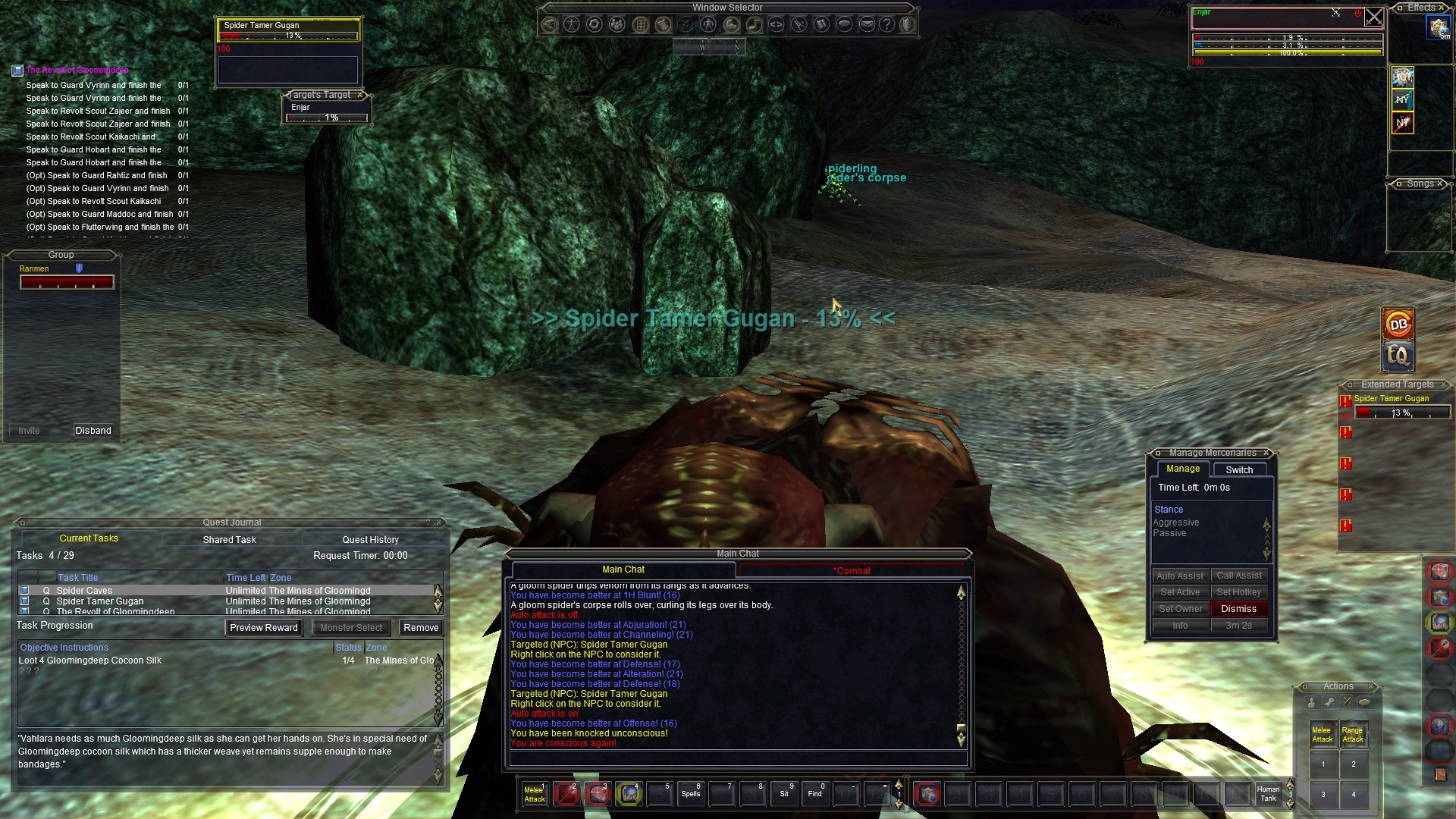 Unless in one of those rare moments I run out of mana. Then maybe my tank mercenary had a good reason to be a bit fearful of my healing. It was late at night and I sometimes was pressing the nuke button instead of the heal as well. My bad.

By rare I do mean all the time. If you never played EverQuest and even more so a class that required mana well good for you! Mana breaks at the early levels are quite frequent and common unless you have some nice buffs which I did not.

Having to take breaks from time to time for mana was a good thing back in the day. It gave the group and yourself ample excuses to get up and walk around, make food, use the restroom, and other things while waiting on the healer’s mana. Games nowadays you could play for days without taking a break and that just sounds unhealthy! I was half tempted to write this post as “Oh The Places You Will Rest” but I did not take quite enough screenshots to try and pull that off. Rest assured there was lots of sitting down and waiting for my mana to recover. Even more so if I wanted to nuke things as my spell damage barely did more than my melee.

While I was somewhat surprised to find a couple for random players in Mines of Gloomingdeep everyone kept to themselves. I wondered a little bit if the recent expansions were the reason anyone at all was even playing again. Perhaps that is why I ended up just logging in to play for a little while ago. 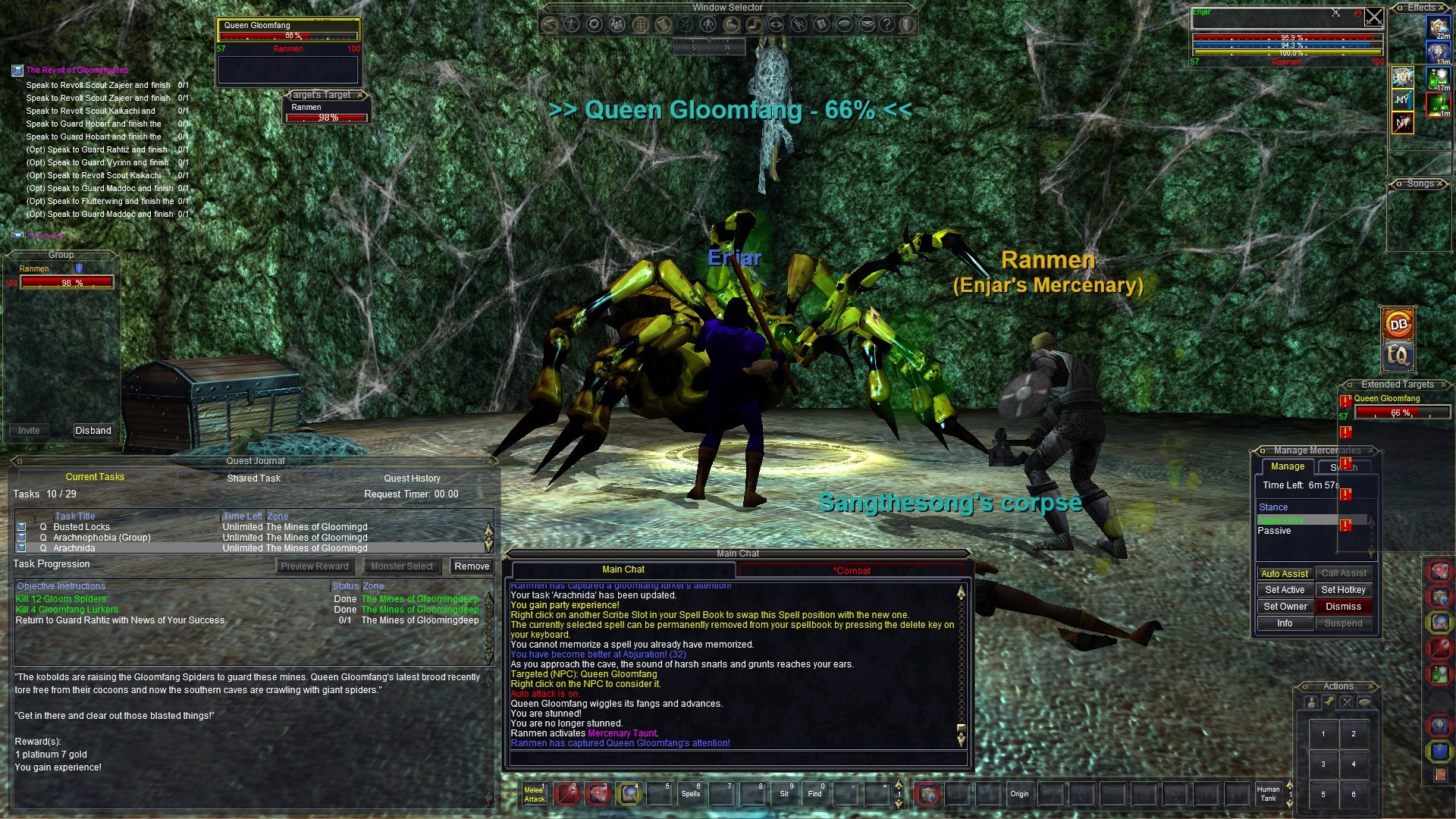 This also meant any quests requiring a group resulted in sheer death the first go around with just the mercenary and me. Many times the mercenary decided to sit on the sidelines despite being given the role of a tank. I think he enjoyed watching my face get kicked in. Other times for revenge on my part I’d not heal him resulting in us both wiping anyway. Take that you lazy mercenary!

You know you are moving up in the world when you are no longer killing rats, bats, and spiders. Instead, you get to kill goblins which if I recall there are some fun zones to kill them later on if I do continue on this joinery. Along with a healthy dose of Gloomingdeep that this zone is ramped with but not for long.

After many fights, lots of resting for mana, and questing getting complete I had reached level 10. Yes, I could have left a few levels sooner but I was enjoying the nostalgic feeling. Mines of Gloomingdeep was a place I had been to a few times making different classes over the years. 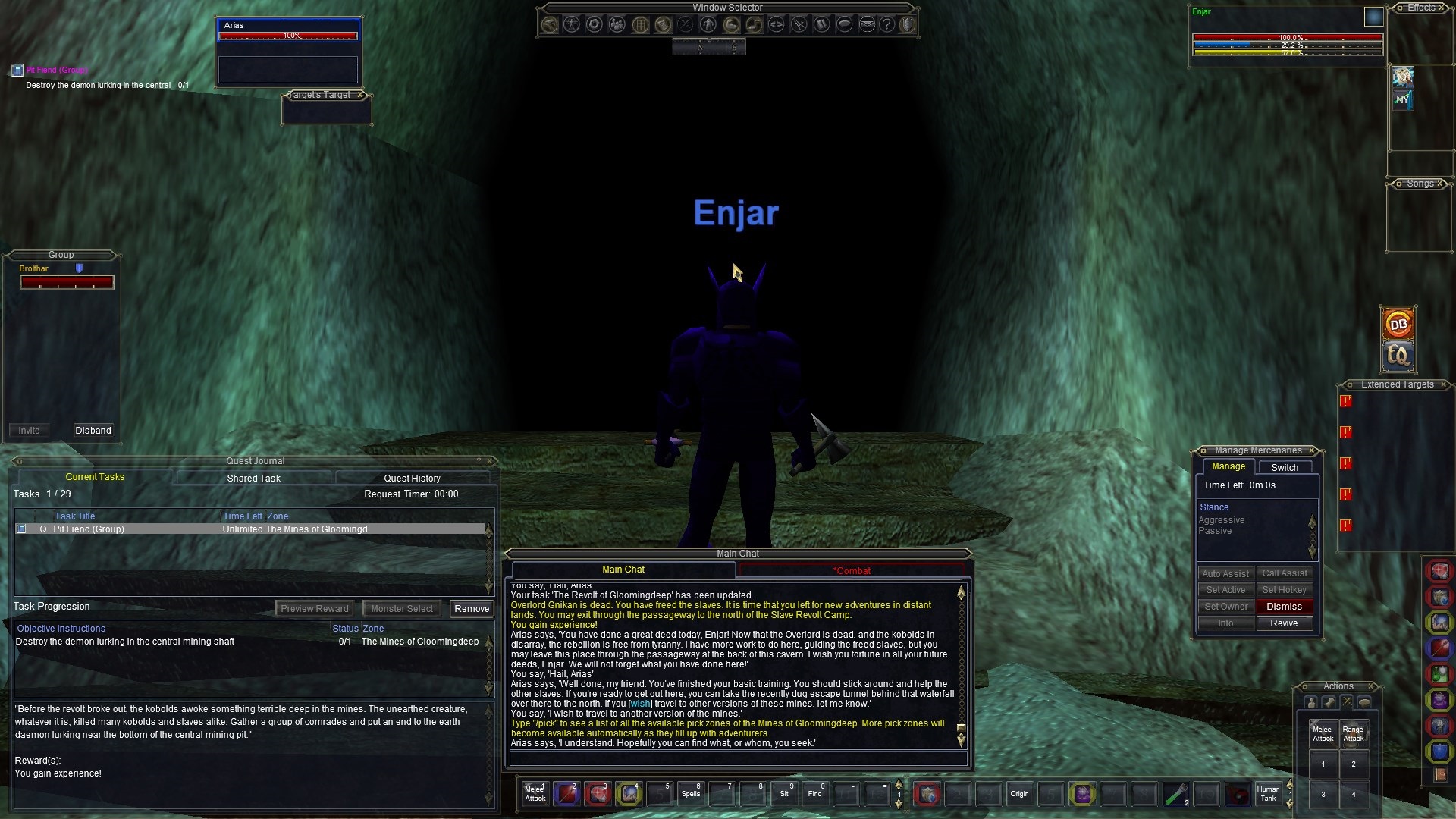 It was finally time to say goodbye and venture on to the next part. While it does appear nowadays the game has questing to try and guide you through what to do next. I frankly did not like them after giving it an hour as it felt like a waste of time.

If I do end up counting this adventure I have some oldie but hopefully goodie zones that I enjoyed leveling up in over the years. The issue is there are now over 500 zones in this game and I can’t recall the zone names or how the heck to even gets to them. Just traveling in this game is an epic adventure all on its own.

Ah, I used to love running to them to find massive piles of copper on the floor to loot. Copper was quite heavy to carry so the richer players would just dump it on the floor for a noob to haul back to their banks. Sadly they have removed weight from money so no getting rich quickly that way it appears.

After exiting the game they were kind enough to remind me I was still a free-to-play and if I bought a yearly subscription for only $199.88 I’d be getting quite the discount. The game also constantly remembers me of popups in-game while I was playing to purchase Daybreak all access. Even a tutorial quest itself reminded if I wanted more mercenary slots (you can only use one at a time regardless) you had to buy a microtransaction item to unlock individual slots. Along with them selling an item to cover the 15-minute upkeep costs of using one if you didn’t want to use in-game money.

While it was fun for a short while I’m not really into this constant remained to spend money. Even more so since it would add up to $200 and after looking into the microtransaction shop that is just the start. Oh, housing? Finally? OMG, hide the wallet.

I can understand they need to make money off a very small player base to keep going. It would just be nice if they were not trying to jam it down my gullet like some web browser games out there do every few moments. I’d like to you know enjoy the game and get the old feels first before attempts to ransack my wallet are made.

Screenshots were taken and content was written by @Enjar. Screenshots are from Everquest.