This adventure was more about traveling to the destination than anything else. Getting somewhere in EverQuest can be challenging and we were not prepared for the difficulties that would follow.

Before heading off to the next location to level up it was time to catch back up on spells the best I could. While I had a couple of hundred platinum this time around from loot. It was nowhere enough trying to get all the ones I needed and buying a few to learn after I level up.

At least I had more money on the shadow knight than the cleric. The shadow knight ended up having a lot more spells than I was expecting. At least in the end I got all the major spells I needed for both characters.

There are also some spells I just don’t need whatsoever. They have to do with imbuing gems or things like detecting traps in special dungeons. I don’t quite recall what expansion the dungeon was in and I won’t be leveling up in them this time around. At some point, I’ll be getting those spells a well and be giving them a run or two.

I would be giving Lower Guk a try as a leveling area. I don’t recall spending any real amount of time ever there in the past. So I’m not at all familiar with getting there or the zone itself. Getting there would end up being quite the adventure all on its own.

One of the amazing things I’ve always loved about low-level leveling up in EverQuest is just the amount of choices you have. It’s not like other games at least at the lower levels where you might only have a zone or two to choose from.

EverQuest is such an old game it has many hundreds of zones in it. Many I might have never been in or only ran through to get somewhere else in the past. It is rather fun just checking things out on my way as I level up. To be able to get to Low Guk I would head from Plane of Knowledge into Innothule Swamp and then into Upper Guk. Due to our levels and how short of a distance of a run it was we just ignored anything we got aggression on for Innothule Swamp. It was no big deal and this ended up leaving me a bit competent in what we were heading into.

Upper Guk while not a massive zone is quite a confusing zone at that. It has many points of entry into Lower Guk being called The Ruins of Old Guk on the map. It also includes multiple levels to this zone including water. I tried to map out in red I think the path I went a few times. It’s one of those places I get turned around quite easily. I was also always someone who could get lost in a shoebox.

This zone would start to begin creating issues from traveling from one place to another. In future adventures, the group is going to have to buy invisibility potions and have spells for traveling. Along with carefully checking to see if creatures they are walking past can see them. We however did not come in prepared for traveling like that yet. It first started off looking like no big deal. Just some grey low-level creatures. This place would be an absolute nightmare for trying to use auto-follow so I would need to manually move each of the characters to different points. It was at about this stage of traveling through this zone I started to get a bit nervous. The cleric was getting hammered. The group itself was all split up just trying to get into the next zone so we could regroup.

While I have some options to use on the cleric they are all short term and I still had quite the distance to go before getting into the next zone. At least if he needed to use a barrier for short-term shielding or try and heal he at least had some options.

My original plan since I noticed while running and checking the map was that the group was starting to get funneled into the same area again. That we try and meet up at a certain point. We then would just kill all these lower-level creatures doing what we need to keep the cleric alive. He would then revive whoever died and we finish off getting through the zone. 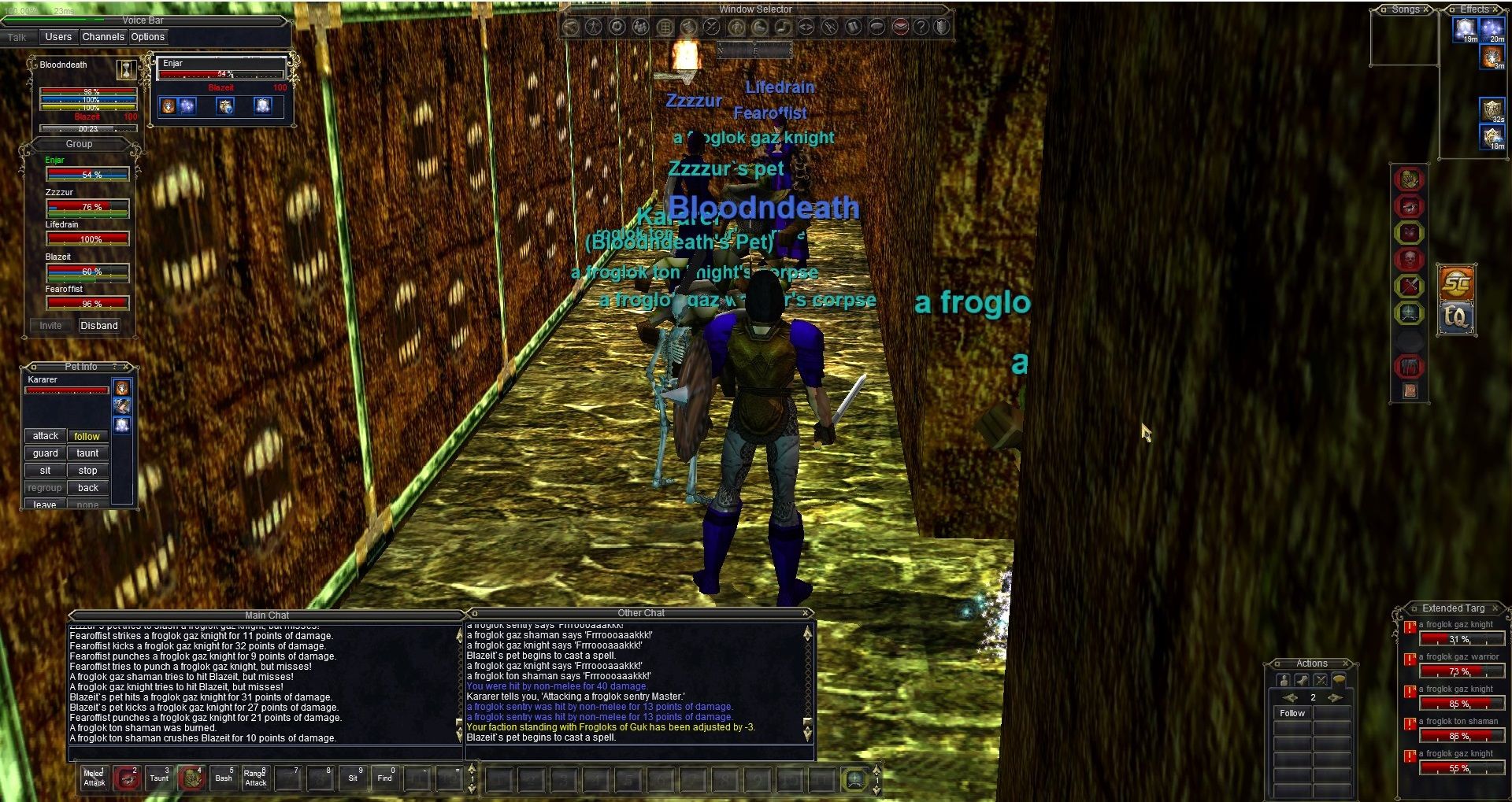 We got up to that point and cleared the train we had created. That had worked out.

We ended up getting to another point where he ran into some higher-level creatures. This time around the cleric got killed early and the entire group was wiped.

Thankfully I was able to run the cleric back quite quickly. I managed to sneak past some trouble areas and get around anything that would have attacked me. I got up to where we had died and found a clear spot to be in range to move the corpse to and resurrect the entire group. After that, it was a short run into Lower Guk.

We ended up staying in Lower Guk for a little while. The area we ended up being in after some levels were no longer giving a great experience. We decide to try and venture into the zone deeper.

That however required us to go underwater and then pop up at a location that had quite a large group of creatures. I got the tank killed twice trying to split and drag back some creatures to our first camping spot.

After some time we managed to reduce the pack of creatures down enough to take the risk and press forward. While it was a bit touch and go for a few moments. The plan had worked and we got across the river and up onto land.

While trying to recover from a bad pull things got even worse. I thought we had it but I did not even load up the tank spells onto the shadow knight hot bar yet since he just got revived back in not long ago. While I managed to save him this time around before getting killed. Everything went after the cleric and I could not save the cleric in time. This left the group without heals and not surviving long after.

It turns out we were not in a great location. I’m not sure if someone moved and got aggression through the walls or if we got respawns. I was a bit too busy trying not to get killed. This was quite a wild place. After that wipe and not wanting to try and get back there, we just summoned our corpse to get our gear. I revived and we called it there for now. Lower Guk was just not for us. At least for the level of gear we had and the lack of zone knowledge for that place. Tight-in-door zones have not been going well for me.