After checking out two different areas to camp in Blightfire Moors it was time to explore more of the zone. There were another couple of tent areas and caves to check out. The group than would be moving to our final camping spot for this zone. I’ve marked in red circles where we end up setting up a few different areas. Both of the caves had decent areas we would try first in front of them before venturing in. Then we head off and camp on a hill to pull a bunch of high-level bees.

One thing I wanted to get some better practice in with is tanking with the shadow knight. The DPS in the group remained relentless not giving me any breathers. It did not matter a whole lot here since they at least had decent gear for the time being. At much higher levels though I need to get aggression locked down with the creatures not even thinking of hitting anyone else.

One nice upgrade I got over what I was using in Kurn’s Tower is now having a shield. With a shield meant I could use bash. While my bash skill is quite low. I can usually count on it to give me a slight edge when needed to further anger whatever I pull into the group.

At some point, I might need to look into the old ways of leveling up a skill. I can’t recall or not if you can just sit around taunting a guard in a town all day without them killing you. There must be something out there I can set up the shadow knight to spend quite a long time just spamming the taunt skill over and over.

The shadow knight’s taunt skill is still so low he might as well not have one. I swear it only works one out of every 10 attempts. Spamming taunt when you already have aggression is also quite a waste. As taunt gives you all the aggression “points” of the highest aggressor or something like that.

With you being the highest it’s just wasted. It also has a couple of the second cooldown. Meaning if someone nukes and ends up getting hit. You don’t have a taunt to get it back. The shadow knight is also not high enough level yet to have a bunch of other abilities at his disposal to help deal with situations like that.

The other thing is of course splitting or at least trying to limit the number of adds I get in a pull unless that is what I want. In Kurn’s Tower it was such a small and tight space there was often not a lot of room to work around with.

On top of that, I still lacked the feign death spell that I would later get on the shadow knight. This allows your character to fall over faking being dead if it is successful. If I recall I use to snare the creature I wanted to pull. Then run a little bit of distance before using feign death. After the creatures I wanted split I would just get up and the DoT (damage over time) component of my snare would bring what I wanted to me. By the time we checked out our third place to camp in Blightfire Moors, I attempted to set the group up where I could work on chain pulling better. At least for the first few spawns down at the tents it would be quick to get the next one to the group right as the current creature is about to die.

This did take a little practice to learn what kind of damage output the group was usually doing if no one was slacking. In some cases, I could easily tag the next target. Other times I would have to allow a DPS to get aggression or wait till the monster started to flee before getting the next pull.

Everything at that camp was a bit too easy. With the levels we were getting up to, the monsters were blue and below our level. I ended up moving the group into the cave. This cave was much bigger than the first one we explored. We ended up talking a couple of steps in sitting at the T intersection. There was only one wondering add to worry about it. It was a lower level so not hard to deal with even if we were in the middle of a mana break. Just something annoying to deal with.

While there was a lot more to pull in the area. Things were not giving us the kind of experience we were looking to get. Not to mention everything was starting to die quite fast. Leaving a lot more time than I would have wanted. 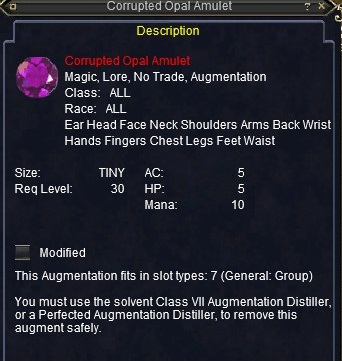 At least we did get some upgrades while at this location. One of them was this augmentation that looks decent for this level. A sword also ended up dropping that the shadow knight needed for a decent upgrade that would help him tank. Along with some other random gear drops that replaced empty slots on characters still.

We then went off to check out the third cave in the area. After two spawn cycles, we quickly moved on. We wanted some harder creatures to fight. 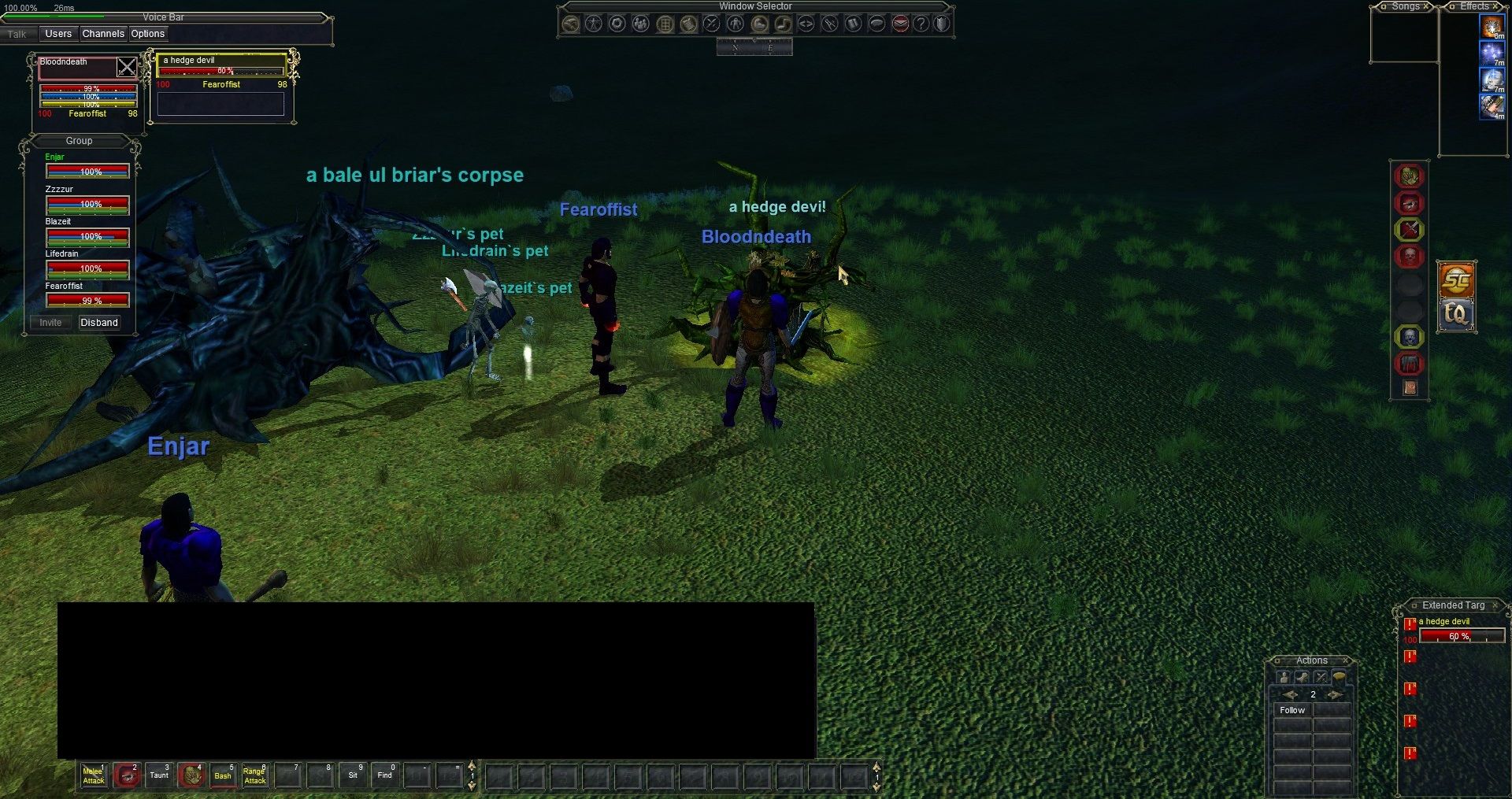 Along the way to the final spot we would be camping we found some reds and yellows to kill. I knew this side of the zone would have higher-level creatures. I just did not know how hard or easy they would be. Thankfully after pulling the first one it was not the third.

We decided not to set up camp here. We were just clearing our way to the final spot. While the hedge devils and other creatures in that spot were nice. We were sitting out in the middle of nowhere. It just did not feel like a safe spot to be. 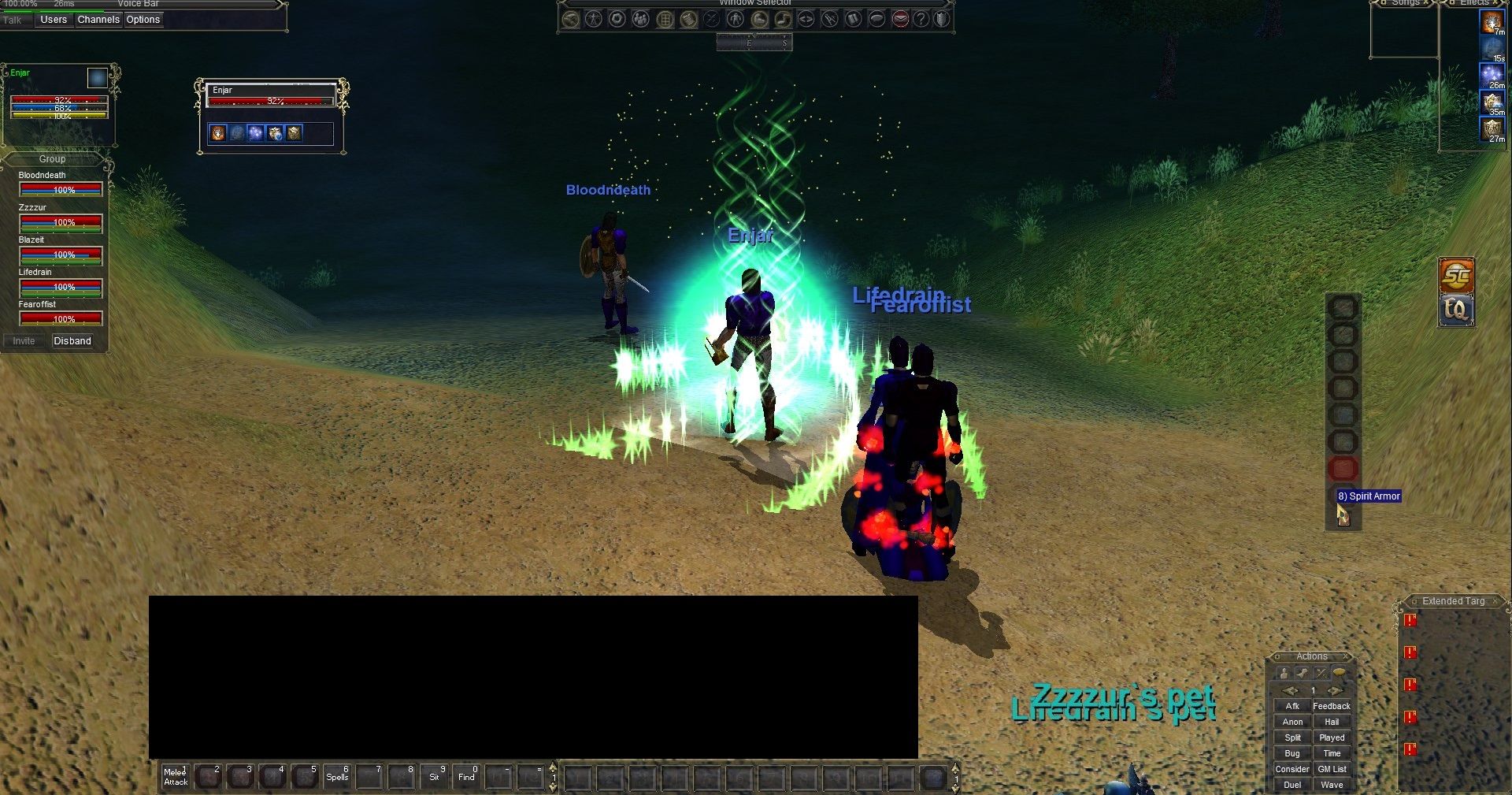 The hills in the area ended up funneling down to this section before heading into the final area we wanted to hunt in. I took it as an opportunity to fully refresh everyone’s buffs. Sometimes I was just being lazy and tossed everyone the main health buff I had and that was all except for the tank he got everything.

Since I had an opportunity to take a full mana break while others took a break. I thought why not get us as ready as we can be. In the area, we were heading into I was fully expecting to be mostly red creatures for a couple of levels at least.

We even attempt to use this spot as a camping area. It however ended up being way too far away from the different spawns. Since we had it all to ourselves I decided to set us up closer to one of the spawns instead of trying to be in the middle of everything. Naturally, we are near a zone called Hive. There were lots of bees out here that gave some amazing experience gains. While we should have gone here sooner it is just fun exploring around a zone for a while even if you are not getting the best experience. 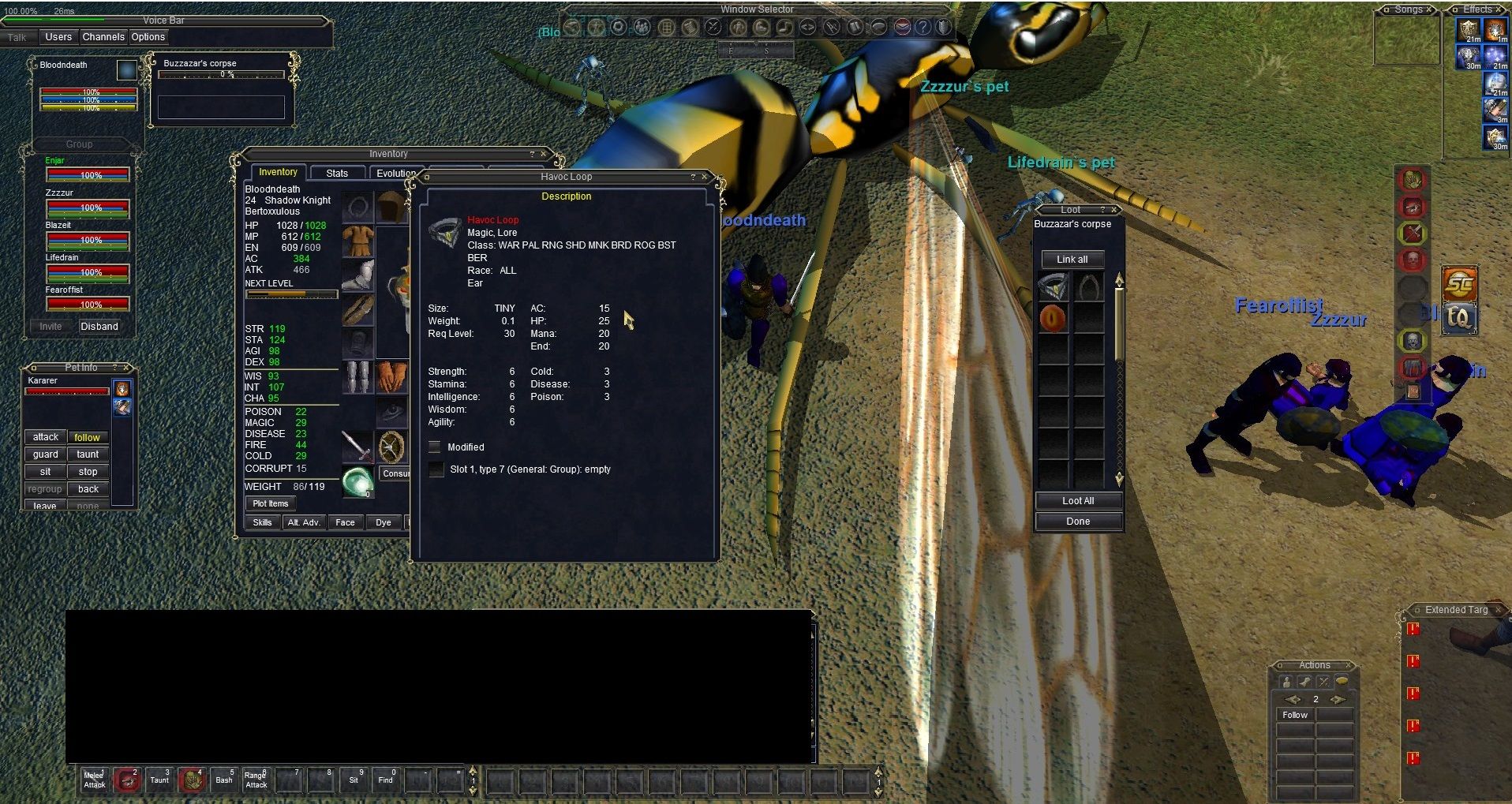 There is also a massive name that spawns in this area and wonders around. I wanted the group to gain a few more levels before we attempted it. It dropped an earring and what must have been items for some quest I have no idea about. 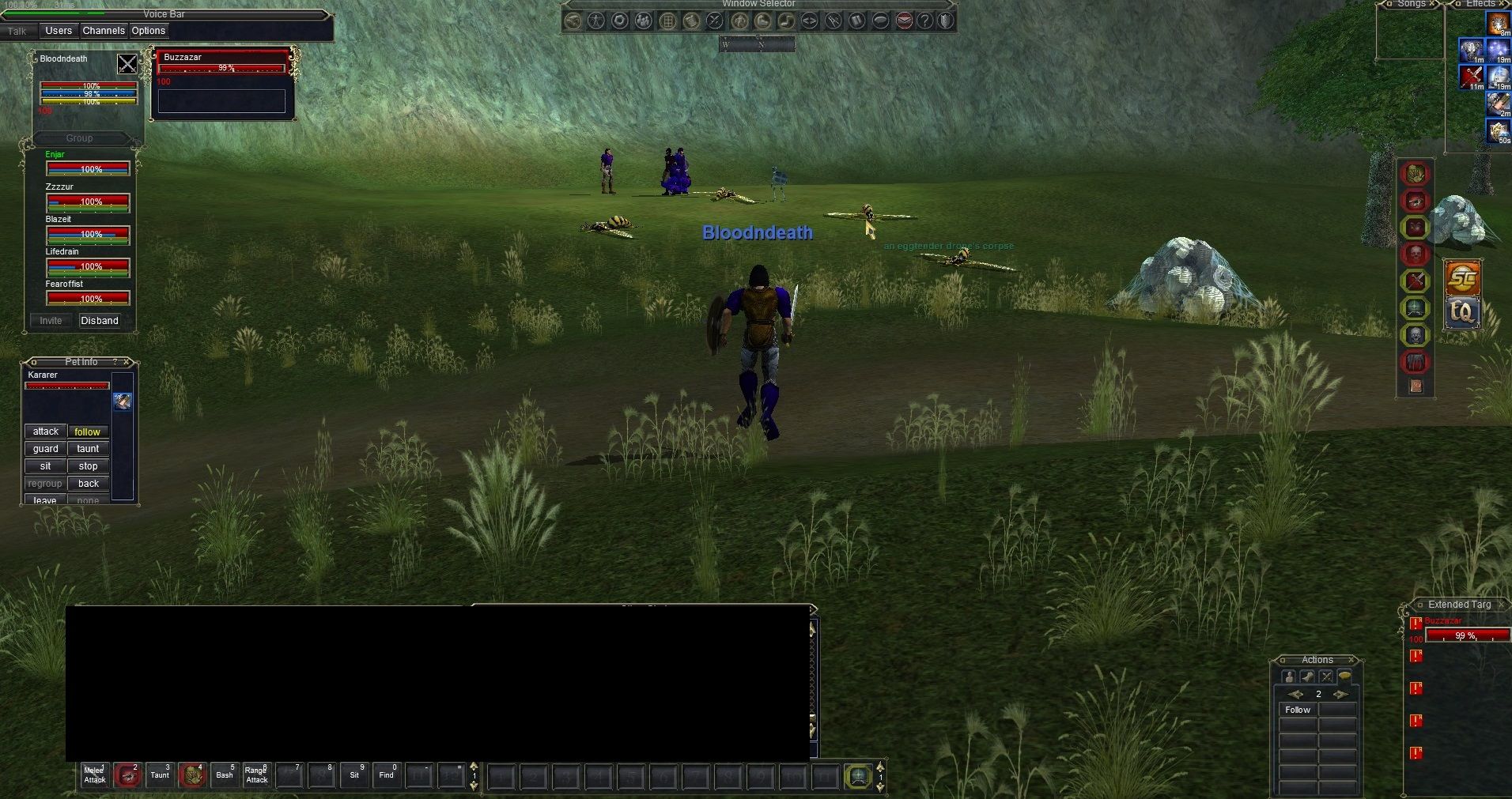 That was quite a fun zone to hang out in for some time. Even better when you can loot some much-needed upgrades. I’m not sure where we will be heading off to next. Hopefully, it will be somewhere fun.