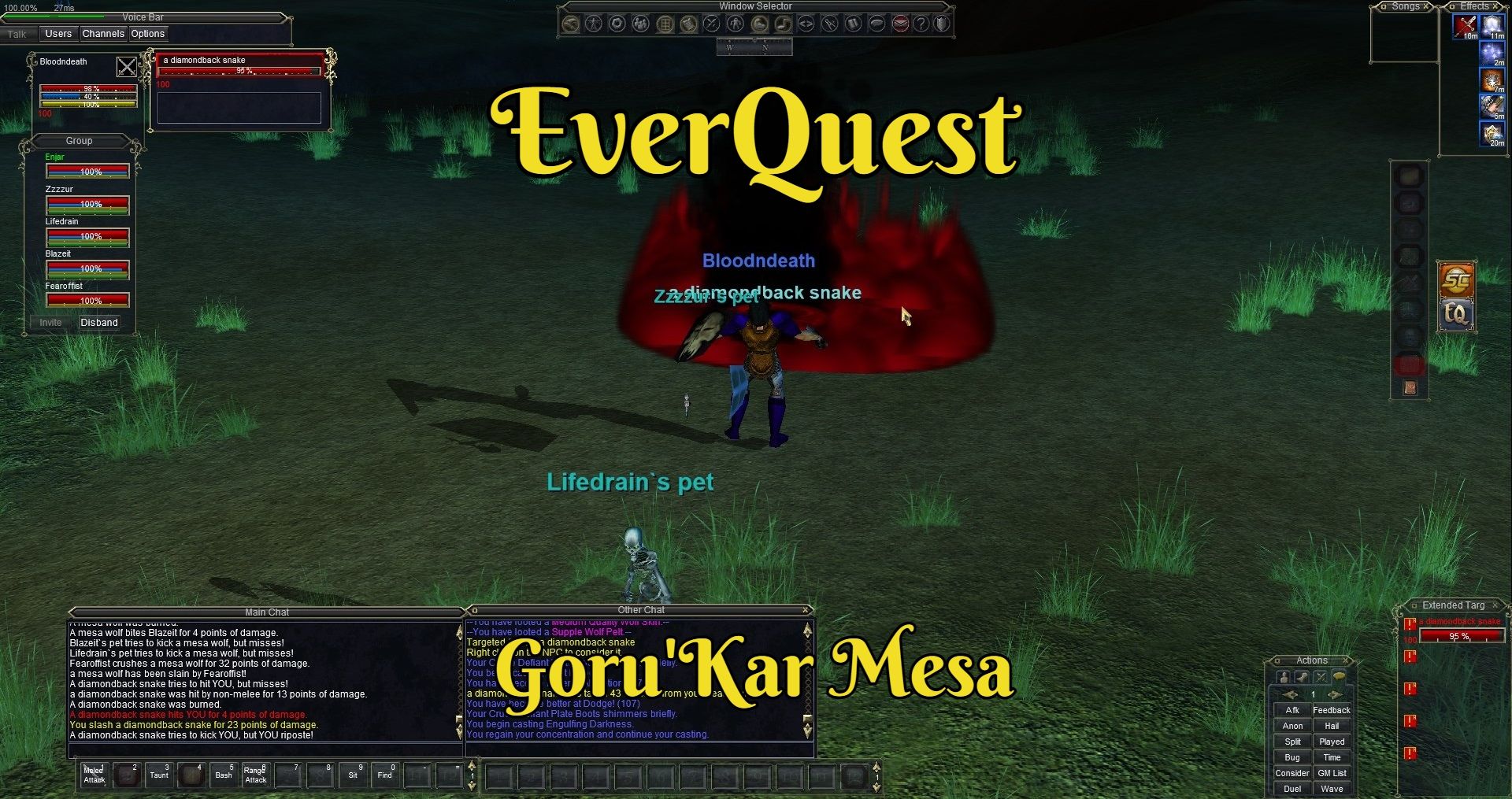 With Lower Guk not going the way I was hoping. It was time to find a different spot to level up for a while. Thankfully there was a much easier place to get to called Goru'Kar Mesa that should fit our needs. It is also our door zone and I ended up finding quite an amazing spot to camp most of our time there.

The trip there was quite simple. We just had to cross Blightfire Moors which is a zone we have already been in before. It was quite an uneventful trip without much wanting to start any trouble. I guess us rocking this zone not too long ago was enough for all the creatures to stay away. 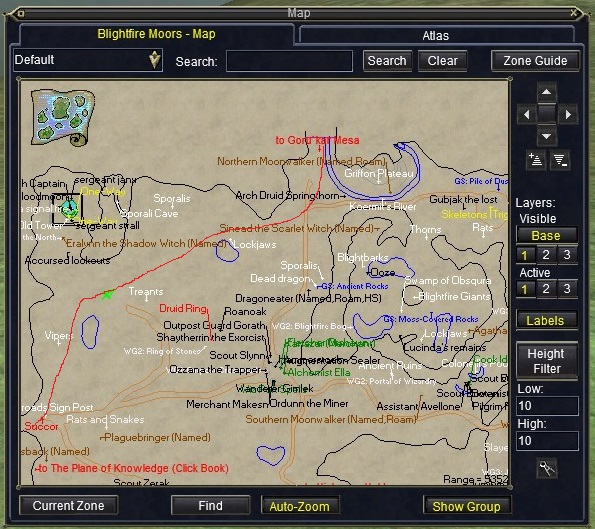 We ended up walking by a couple of lakes as shown in the red line for the approximant path we took. We then enter the zone right along the side of the river that cuts through a part of Goru'Kar Mesa. From there I wander around a little bit trying to find a decent place to camp. We were mostly looking to hunt bears, snakes, and wolfs. They would start off being yellow or red to us and provide some amazing experience.

There were a few different packs of creatures to pull from. When I would run out of things on one close side I would cross the river and continue pulling what I could find. This however did not seem most ideal.

I would have to swim across the river every time I pulled from the other side. As we started to gain levels we also started to kill things quicker. That resulted in me having to go further out for things to get creating longer downtimes between kills. After checking out the area, sure enough, there is a bridge going across the river. This ended up making an excellent place to camp. I could pull from both sides with ease. There was also a few different groupings of creatures nearby the bridge as well.

With this being an outdoor zone with wide-open areas it gave me some needed time to practice split pulling. While not everything needed to be splinted and sometimes depending on the creature's levels I would bring in two if it went that way. It was at least great to get more practice in.

I also started to test more with different DoTs (damage over time) to see what kind of aggression I could get and hopefully hold. With this group being such a heavy caster group there are times when a nuke is going to get a caster attacked. 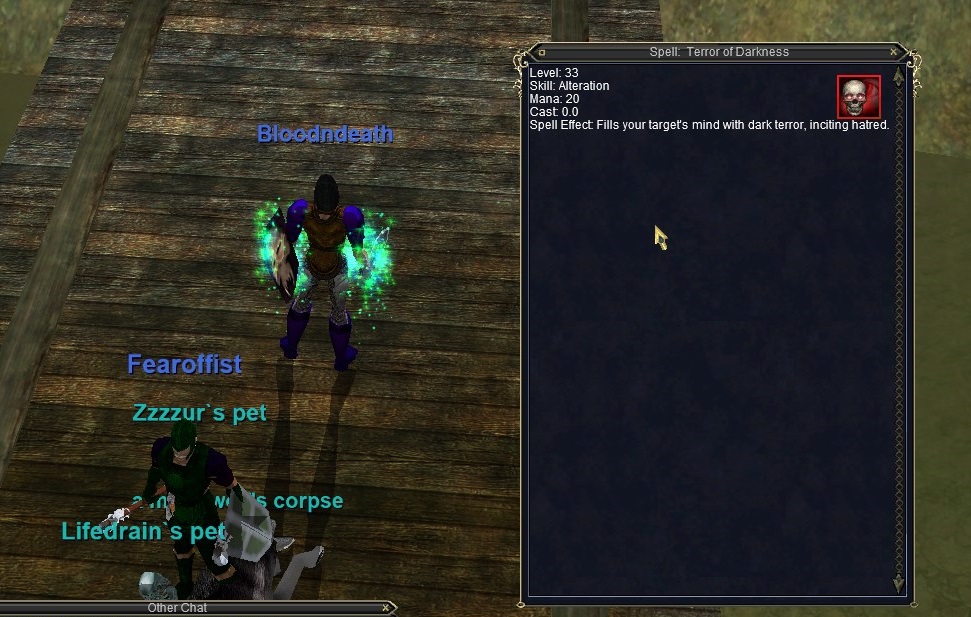 Thankfully later on I would get an anger spell that generates a lot of hatred that would make my life tanking so much easier. Taunting still has a high failure rate and it feels like I’m not at a point where I want to be tanking-wise.

It was rather nice not having to worry about getting respawns on the group. The bridge was quite a safe area in the zone. It almost put us in the middle of the action without being in the middle of a camp having mana breaks getting interrupted.

When you have such an easy camp as this one it becomes easy to want to overstay for a while. Long past when it would be worth the effort to try and find a better place to camp. We were getting a lot of kills in between respawns in the end.

I had even found a couple of names that were spawned in the zone while out exploring around waiting for closer creatures to respawn. We did get a couple of upgrades out of it. Nothing major. The cleric and shadow knight need some huge gear upgrades. They are starting to lag by quite a bit. Thankfully I have been able to keep the group alive for the most part. I think we only had one or two deaths while out here. Both times I was already low on mana and should have not gone out to pull another.

While some questing items did drop during our stay here. I left them to rot. While I could have attempted to look them up to see if there was any info on them at all. Chance are it would be old and outdated information if even that.

Despite the name of the game questing is not something I put a lot of effort into for the most part. While there are some leveling questing to take on if you want. This time around I’m mostly just ignoring them and enjoying just grinding creatures out of the experience.

Once we were done we headed back to Plane of Knowledge to sell off all the loot and go on a massive spell buying spree. It was rather nice being up around 700 platinum it came quite in handy for all the spells I was missing.

I also took this time to restock up on some needed supplies. Thankfully we have an enchanter in the group so I don’t’ have to worry about finding mana regen buffs or anything like that. I would soon be broke again and need to go back out hoping to find something decent to loot. Goru'Kar Mesa ended up being an amazing place. I’m rather glad we went to check it out instead of attempting Lower Guk for another round. The experience seemed better here for a kill we did not have to press our luck to get into a higher-level part of the zone since it’s all wide open and easy to travel around in.

Here is hoping other places I end up trying to level up at end up being this easy to get to. Along with just being able to sit in one camp for the majority of the time before moving on. When boxing multiple characters it’s kind of nice not having to try and move them elsewhere and the auto-follow system in this game is quite bad.