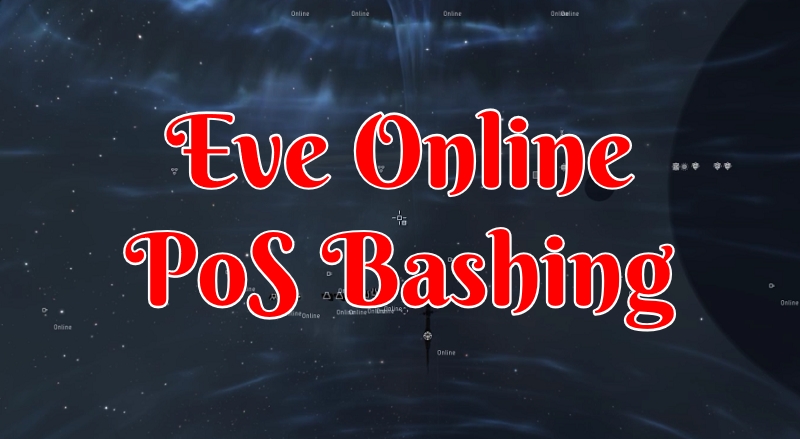 when I was playing Eve Online quite a few years ago I was in an alliance called Z.E.R.G. True to their name they were a very rapid growing alliance with dreams of one day moving down to 0.0 space and taking some space for ourselves. Long before such things could become a reality we needed income sources. 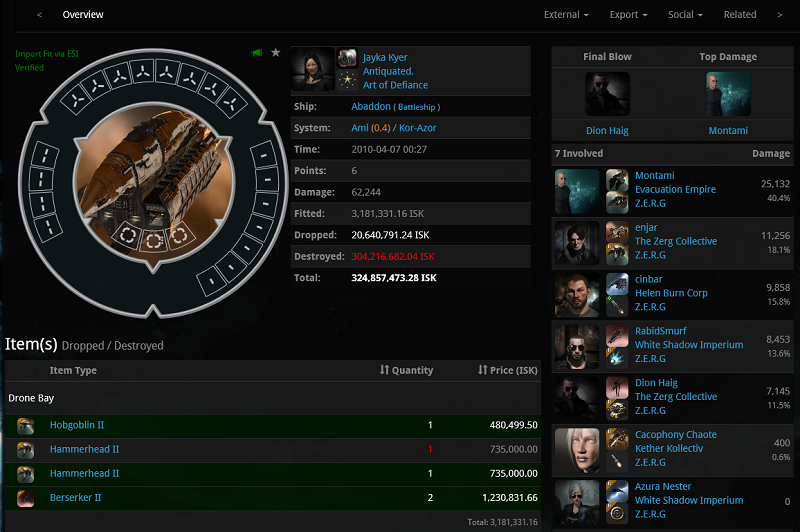 Link to kill mail
While most of the members in the alliance at the time was not into pvp they slowly had divisions growing out that enjoyed the thrill and could afford to take personal losses that fun brought. We were a rather poor alliance so replacing ship losses were not really a thing. To solve that and move onto to bigger things they started doing a lot of POS (player-owned starbase) bashing (attacking and destroying).

It’s called bashing as you need to show up with hopefully a large force and attack a POS until you reinforce it. You then need come back another day when it’s no longer in reinforce mode and take it out.

Sometimes they get a large turnout and other times not so much. Since you are not getting any amazing kill mails just for putting in into reinforcement even fewer players wanted to do that. Often times we would show up with a not so large fleet and spend hours bashing with our weapons of lasers, missiles, bullets, and drones until it was time to go home.

Often people would leave during the middle of such an operation. More times than not after a while communication went from be quite and take orders to from the FC (fleet commander) to trashing talking and a night of drinking.

The people who lead these attacks put in some time researching the best targets in our area. Eve Online is one where one day your alliance rose to power after years of hard work. Another day it’s wipe out and everyone is pillaging anything they can find and things get lost and left behind.

Many of the POS in our area were controlled by alliances that had since moved on or fallen. While they were moon mining and more than covering costs of fuel (which is why we wanted them). They were also usually not worth that alliance time to get a defense fleet up there unless they were really bored. It was just free money until someone with some balls would show up and take it.

Most of the time we would show up. While attacking that alliance would have an alt character log in and start talking trash in local about how they will come and murder us and kill our alliance. It was almost always just talk. The target we selected we know had a long time ago moved out of the region and where far too busy trying keep what they had elsewhere that had a much higher value. Any POS in the area that we know had a higher value (used for logistics or a fallback point) we left alone.
For us the biggest danger where people showing up just looking to pick off our bashing fleet to get some battleship to kill mails and then run away. This usually happened when what was left of the fleet was returning home. By that time everyone in the area where well area we had been bashing a POS for hours. Many people by the end log off for the night wherever or went home early. 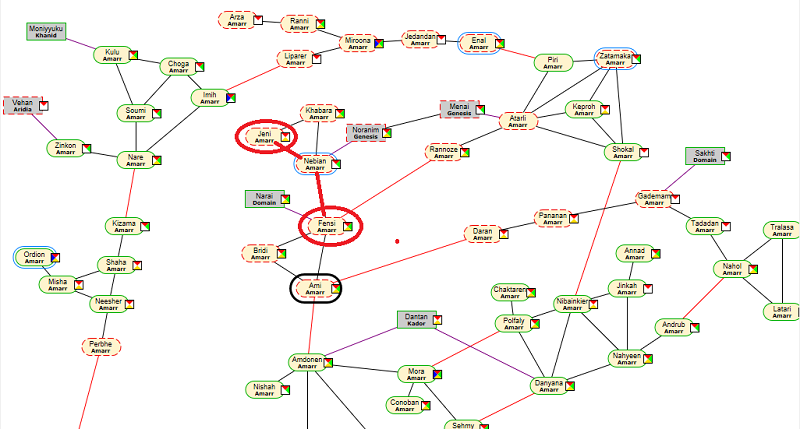 Link to map
One night we show up to a very under-gunned POS that needed to be put into reinforcement. As such we had an unusually small turn out. We just had a string of POS bashing all week and they can get rather boring unless people are showing up to defend.

It did not take too long before we were just talking away and having our own fun in Ventrilo or whatever we were using at the time. After quite a few hours and people falling asleep, the POS was finally in reinforce. It was time to go back home to Ami.

I believe at the time we were working in Jeni system so we would have jumped into Nebian next. After that, it was to Fensi and then home. The scouts jumping ahead did not notice any signs of any trouble. Just a single ship at the time.

As soon as we jumped into Fensi a small fleet showed up as well. We all were bored and thought why not there might be some fun to be had.

I was one of the first to be attacked and that is when we realized it was a trap. The ships that greeted us had a heavy focus on using a capacitor (energy) neutralizing weapons. Before I could even get back to the gate to wait out my combat timer to jump I was out of the capacitor.

Since I fly Amarr and user laser weapons I started to turn them off as I needed everything I had to go into my mircowarpdrive in hopes of making it back to the gate. I was dead in the water long before then and they had enough neutralizers to ensure I was taken out of the fight rather quickly even with me using cap boosters.

That is when one of the ships lit off a cynosural field which acts as a beacon for some of the largest ships in the game to be able to jump into that system if they are within range. They brought in a couple of carriers some of which I recall did not even have time to get a lock before we all were dead.

Those that could get out surly did and the remaining of us went down without much of a fight. At least we had some thrills that night even though it was at our own expense.

Later on that week another fleet of our own showed up and took out the POS. So it was at least worth it in the end. I myself was not going be on when it was time to take it out so I did not get to join in. 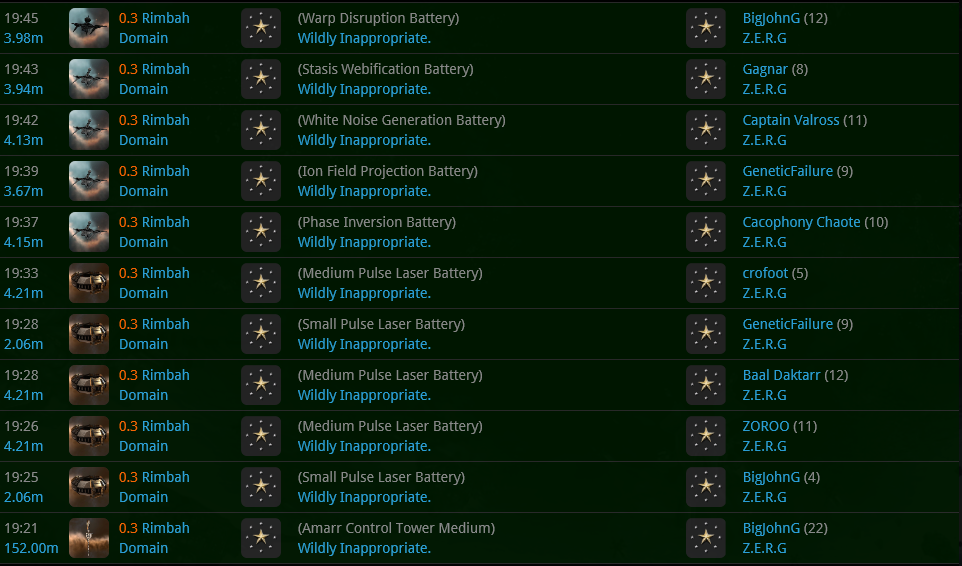 Kill mails
I did, however, the next day join in on an operation to take out another POS that was just coming out of reinforcement. Sometimes you get to show up just for the glory other times you went down in flames and had nothing that day to show for it.

Z.E.R.G itself went off to attack and destroy quite a number of POS. Over time we got it in our minds we were ready to move down to 0.0 and try and build up even further from there. That did not end so well and the alliance ended up falling part shortly after most of the people who were willing to go down and take a high risk had their ships transported. Overtime all POS they had owned fell and were taken by others.

This while rather time frame I was with them was some of the best times I had in the game. Lots of fleet roams that I got to join and I could go off on my own whenever I wanted. They were also located out of Ami which one on the border to a high-security system so resupplying and selling was a breeze.

Screenshots are taken and content was written by @Enjar about the game Eve Online. Based on what I recall of playing this game.