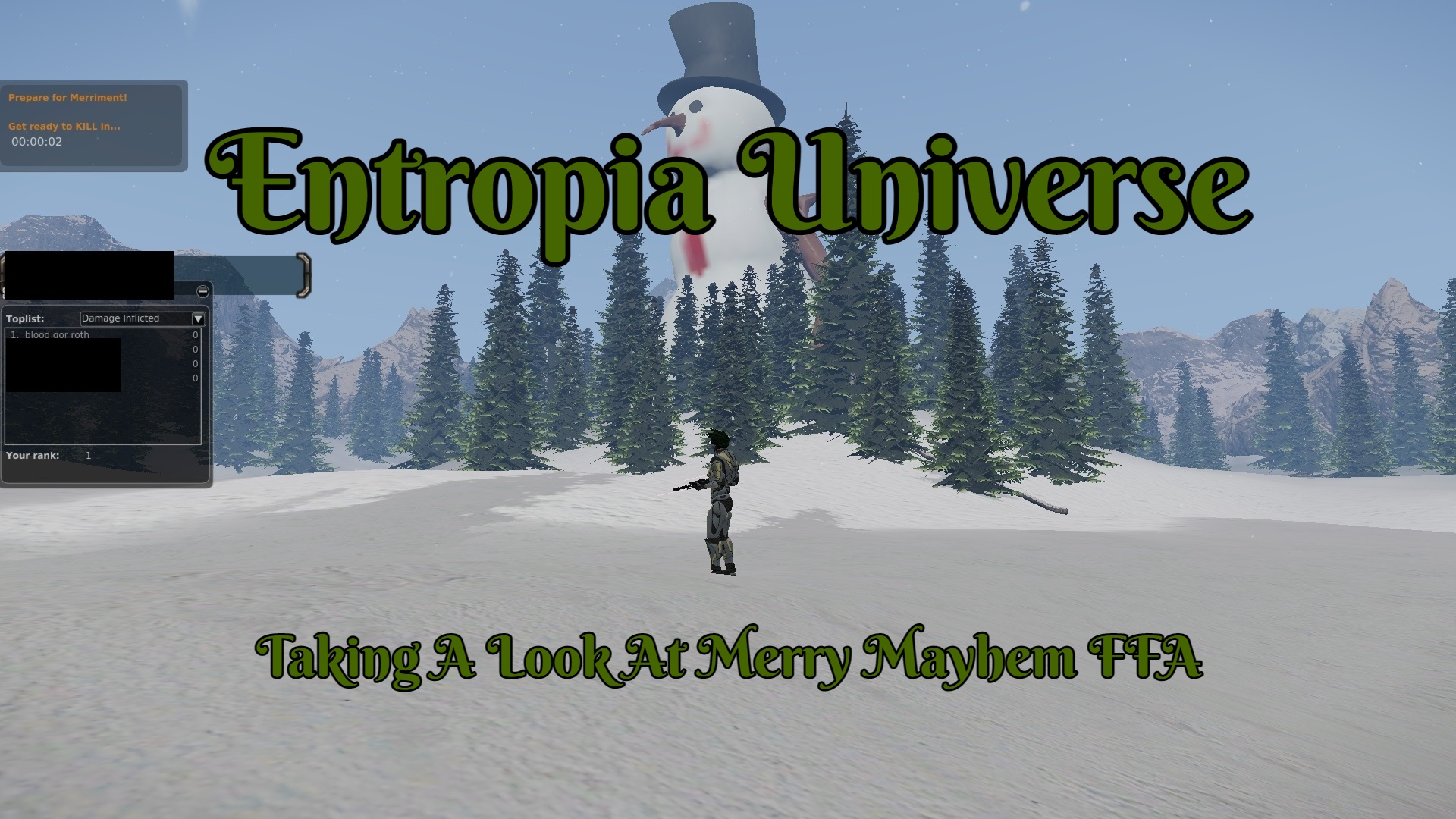 Along with the Merry Mayhem Annihilation event you have going on which I’ve mostly been doing. There is also a Free For All event for Merry Mayhem that is a bit different. For a fun break from Annihilation, I thought I’d take a look at free for all.

Unlike Annihilation which you can access from a global instance from any planet in Entropia Universe. The Free For All event requires you to speak with Santa’s Little Helper on the planet Calypso. I happened to use the one at Fort Ithaca next to the Christmas tree at (68548, 87963). 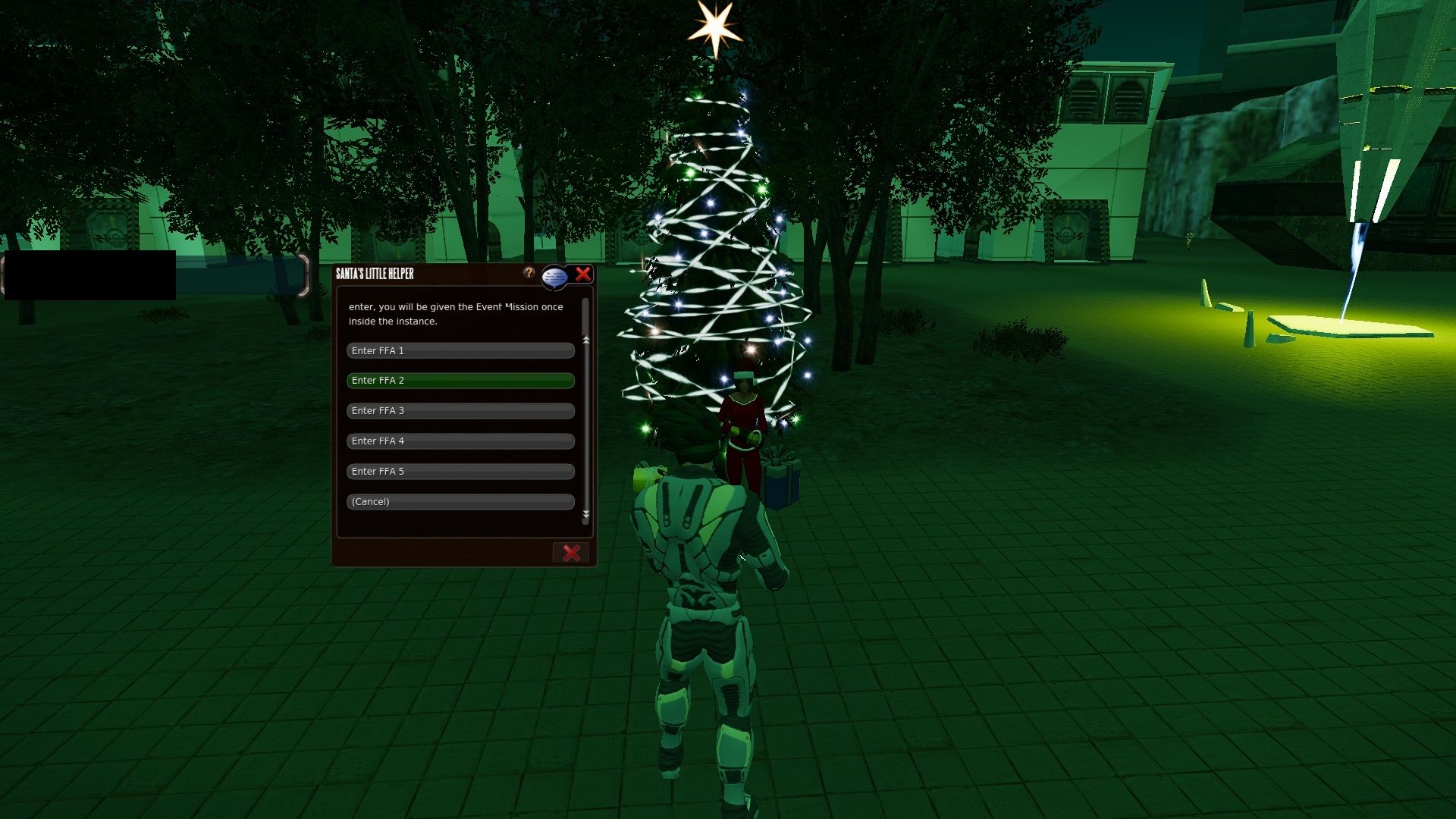 From there you have the option to select between five different FFA (Free For All) event instances. Keep in mind these instances are much harder than Annihilation at the lower levels. FFA 1 has creatures starting at 900 health and up. FFA 2 has 2k health and up and it skyrockets from there going into even higher instances.

These things are not made for lower-level players. That is why they have such massive jumps in health between instance levels. Most players who don’t have a large budget would be most likely happier working on Annihilation unless they see profit potential in FFA which I’ll be going over later.

A huge difference between Annihilation and FFA is in Annihilation when you score points they are towards a mission level you have selected and can’t be traded. In FFA you don’t have such a mission and instead of earning points, you get Mayhem Starts that drop that can be traded.

I ended up selecting FFA 2. I was not looking to fight creatures with only 900 health. I wanted to see how my gear and gun would hold up fighting 2k health creatures. 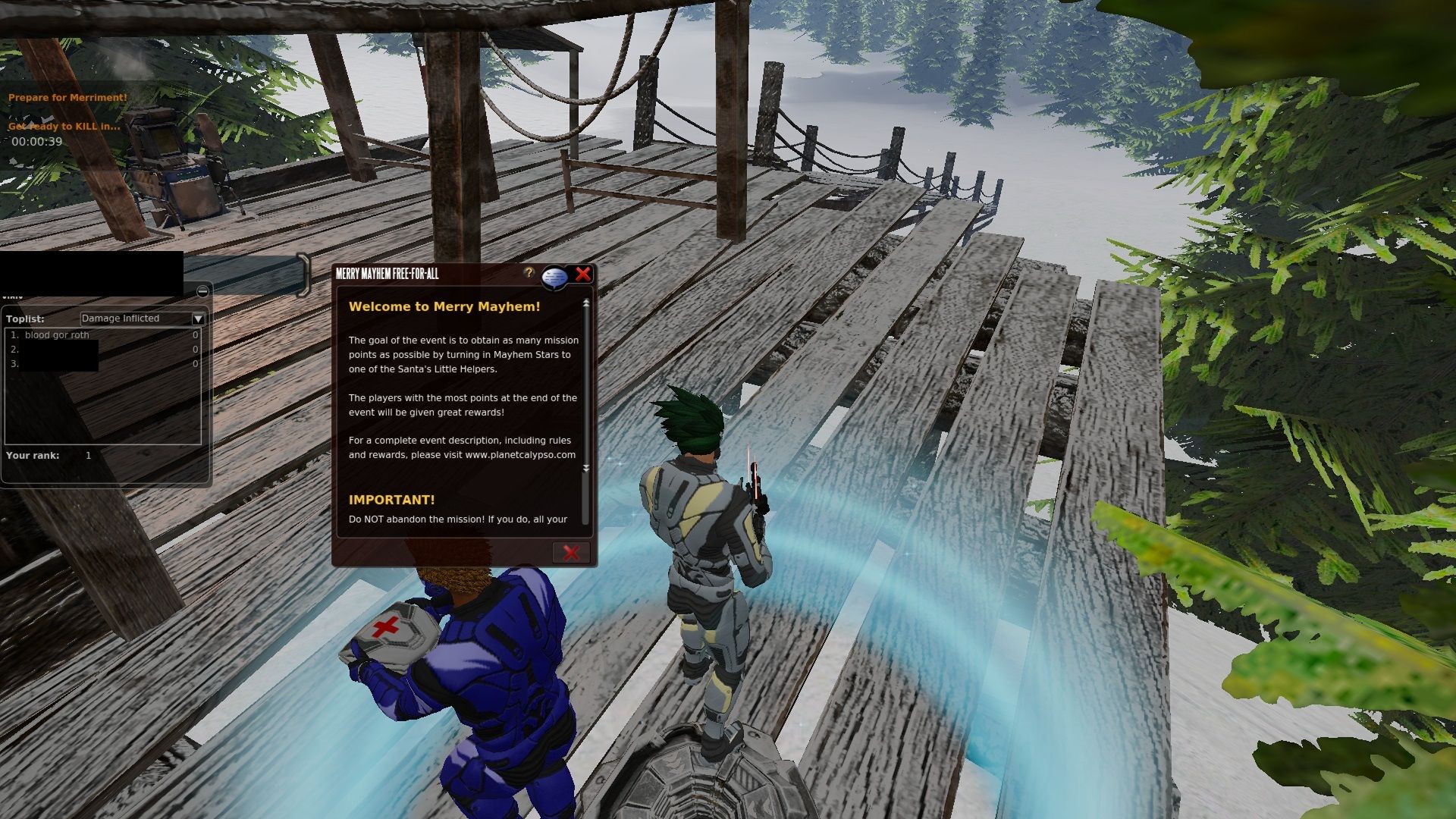 Once you enter you will notice the other huge difference. You are not alone. FFA instances last for only one hour at a time and will have quite a few players jumping into them throughout it. This also means that players will team up with each other to increase their chances of getting the higher-spawned creatures to themselves.

I noticed most players once they enter here find a spot to farm Mayhem Kerberos. I often found myself getting respawns on top of me. Along with sometimes having to move around once the spot I was in got overcrowded and it got cleared out.

You can also fight Mayhem Araneatrox. I did not end up fighting any of them but they seem reasonable if you can kill the normal variety of them. They seemed to be taking up the other side of the instance that most players were staying away from. I never went over to that side.

There will also be Yulebot. You tend to see the highest DPS or people in groups going after him. He is a robot so the gear you are wearing to fight Kerberos might not be exactly ideal since he deals with Impact, penetration, and cold damage. It also has a lot higher health such as 8k in FFA 2. While you kill creatures inside this instance you have a chance for Mayhem Stars to drop. You can see on this one kill I ended up getting a DIM (1 point) and a Glossy (5 points). While they do show they have 400k% markup and up. they are extremely low TT and you will need a few of them to sell for 1 PED.

While inside killing creatures in here will grant you some progress toward certain missions. You get credit for the daily Merry Mayhem. Along with codex credit for killing as well. You however do not get any credit for Annihilation. This is why most players choose to do one over the other. However, with the event being 41 days it leaves a lot of time for many players to do both.

The level 27 Mayhem Kerberos in here were hitting me hard enough that I made some changes to my normal armor setup. I slapped some Mark 5B plates into my ghost armor. I also had to heal on occasion or when I get adds spawning on me.

For the first ten minutes of the instance, I was doing rather decent DPS-wise compared to other players. I was ranking second. As far as I can tell there seems to be nothing special about damage ranking. It just seems like a fun little stat you get to see while clearing away.

A bunch of higher-damaged players showed up after I had some back-and-forth between being in second and fourth. My ArMatrix LR-40 (L) was out damaging quite a few players in the instance as there were a few in there. It was just not enough to hold second place but it’s not like it matters. I slowly drifted into the third and then finally the fourth I spent the remaining hour-long instance. 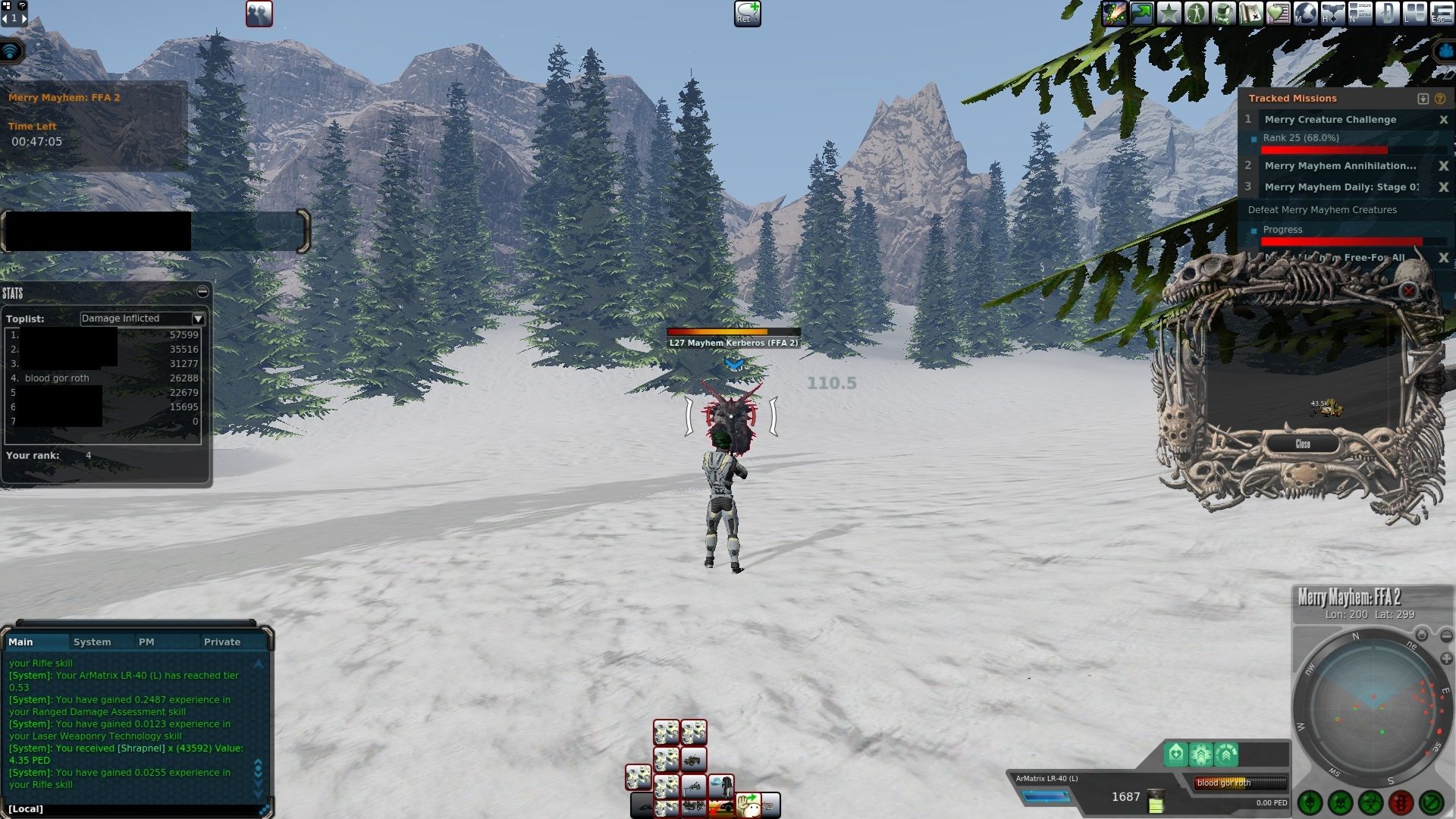 For these being 2k health creatures and level 27 I was expecting the loot to be somewhat better. I was going through ammo like crazy and the loot for most of my time while hunting seemed to be rather lackluster.

You might also be able to see that most of the players that were doing the damage all seemed to be in the same area I was in. While there was certainly more space at the front of the instance it seemed everyone wanted to be back there. 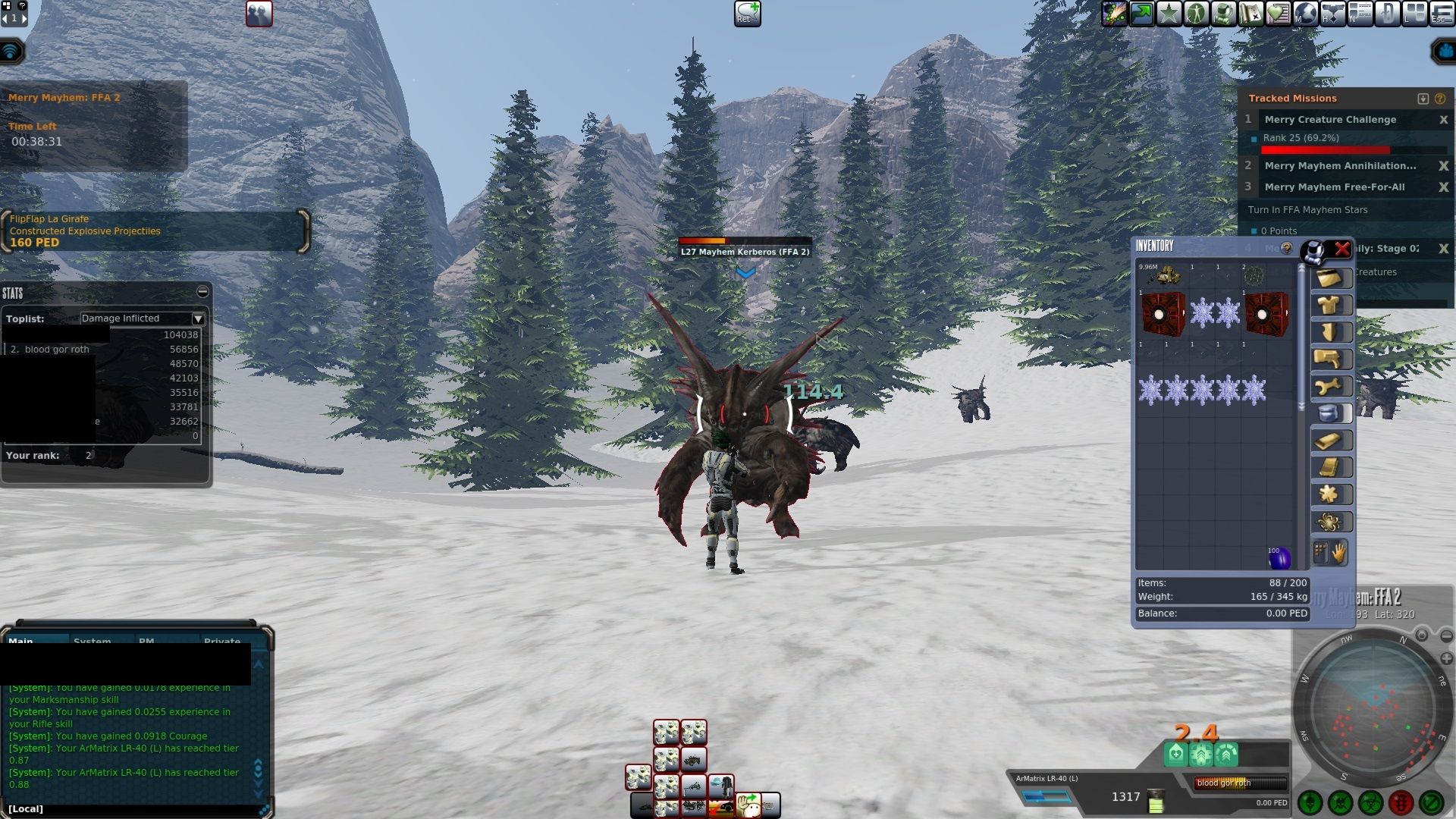 You can see almost throughway though I had looted a few Mayhem Stars. I however did not seem to have looted many Mayhem Tokens or lockboxes that I would have expected. Perhaps my kill rate was just that much slower than what I can do in a lower instance which had a huge impact on that. I’m not quite certain it just seemed like a low token count.

I was starting to think I was going to take a heavy beating from entering into this thing. Then I got my first global of 61 PED. While it was just shrapnel at that point I’d take anything. 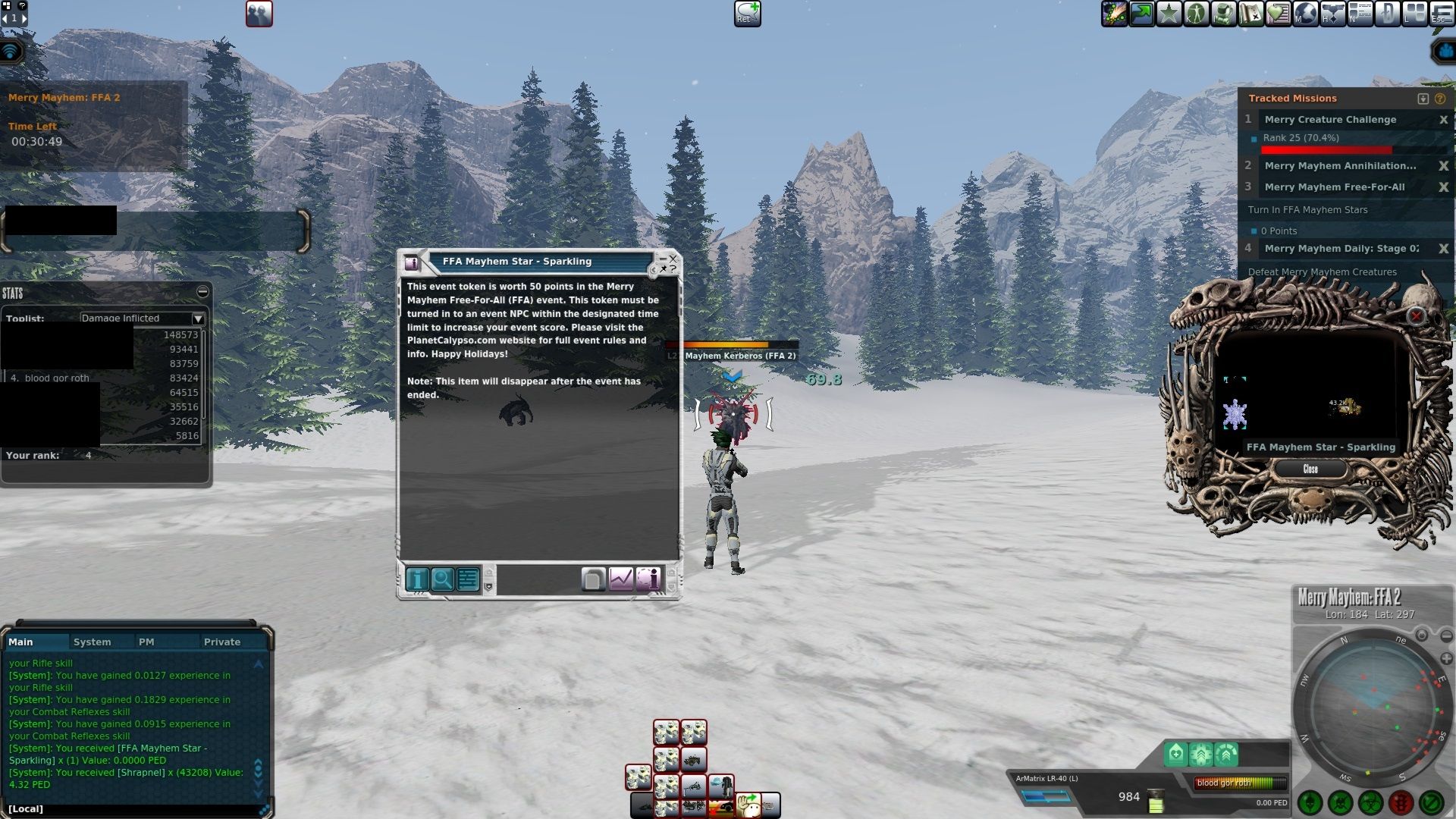 During this run, I did end up looting a single star worth 50 points called Mayhem Star - Sparkling. It’s still however not worth that much since the biggest stars award 5k points and that is what the uber players are after. The FFA event in total over the 41 days only pays out the top 10 positions in terms of points turned in. So it is understandable most players are not caring about 1-point stars. The Mayhem stars also only last till the end of the event and then they disappear if not used.

One thing I was struggling with this entire run was a safe spot to sit at. Since everyone was clearing around me I decided it was just worth getting adds on top of me. I did have a couple of instances where I and another player tried to pull the same creature around the same time. These things are expected to happen and it is not shared loot. Nothing else that exciting happened till the instance was almost done. I ended up getting my second global for 94.80 PED. Now that felt more in line with what I was expecting hunting much bigger creatures.

Once the instance was almost over I stopped shooting. I did not want to have something halfway killed when the timer reached zero. Good thing, as well as once time, ran out it auto-kicked everyone from the instance back to where you joined from. After that I combined all the Mayhem Stars I looted in my inventory and took a look at what I had. I had looted 18 1-stars, 3 5-stars, 2 25-stars, and a 1 50-star. That seemed like not a bad run I just did not think they are worth much. So I ran over to the auction house to get a better understanding of pricing.

After looking at quite a few different Mayhem Stars I decided to check out the highest point one called Glorious worth 5k points on the auction house. It seems a couple of people a day might loot one of these at best and bids were trying to buy them for around 150 to 192 PED.

At 150 PED that makes 33.33 points worth 1 PED. If those rates hold for all and that is not a premium price for that many points from a single star which I would assume it is. I would have looted roughly 3.99 PED worth of stars. As far as turning in the Mayhem Stars for points you just need to speak with Santa’s Little Helper the same NPC you talked to for getting into the instance. Make sure to only turn in the exact amount of stars you have selected. I did not and she ate them without giving back the extras or points for them. 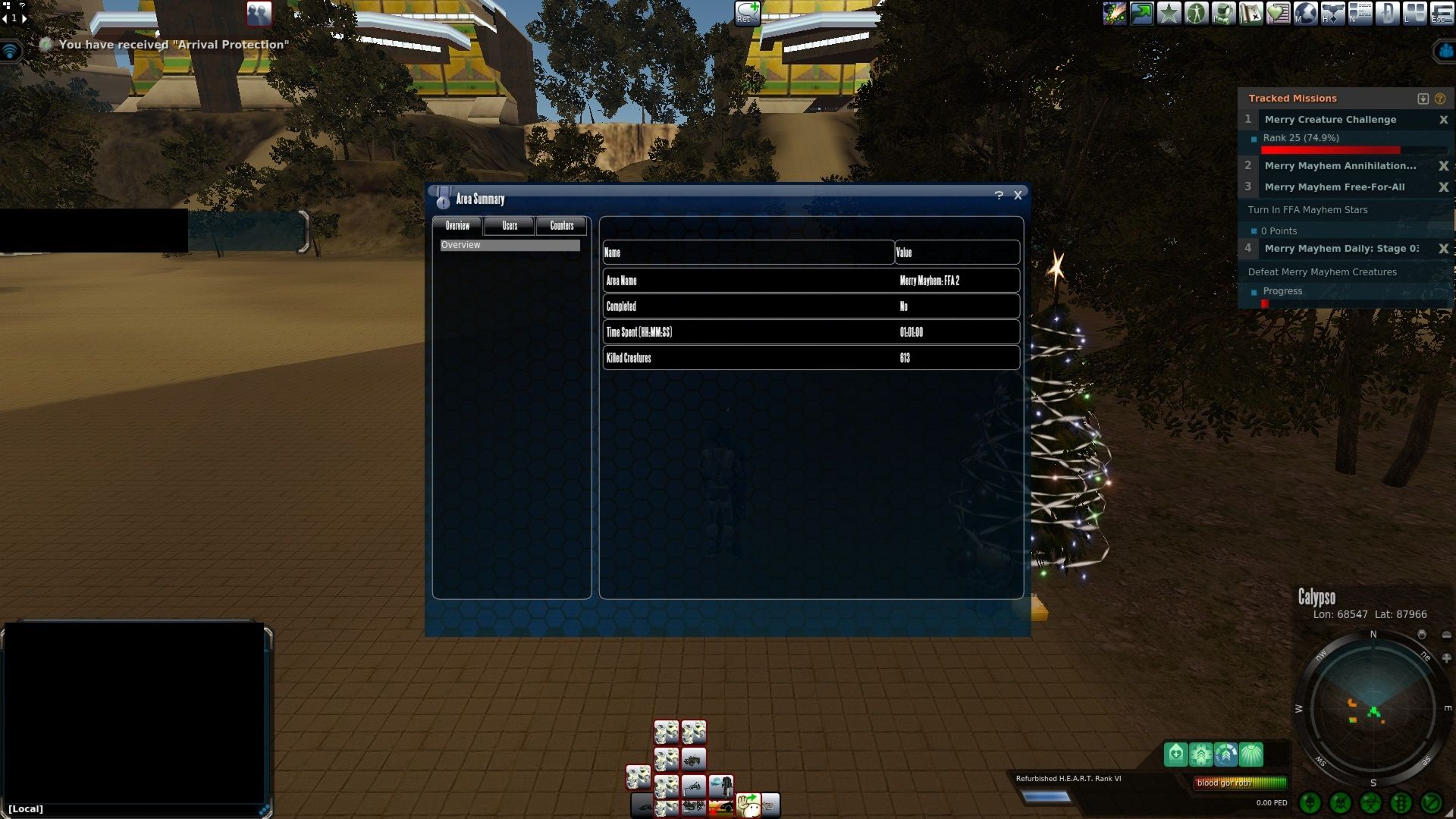 My records show I went through 894 PED of ammo in that hour. I also seemed to have looted a lot fewer Mayhem tokens and lockboxes than I had in Annihilation. So the amount of points worth of stars I looted was not worth it.

It would have for sure been a different story if I had looted some bigger stars worth a lot more points. I however decided this kind of instanced event was not really for me. I went back to my grind in Annihilation. It was at least fun to check out.