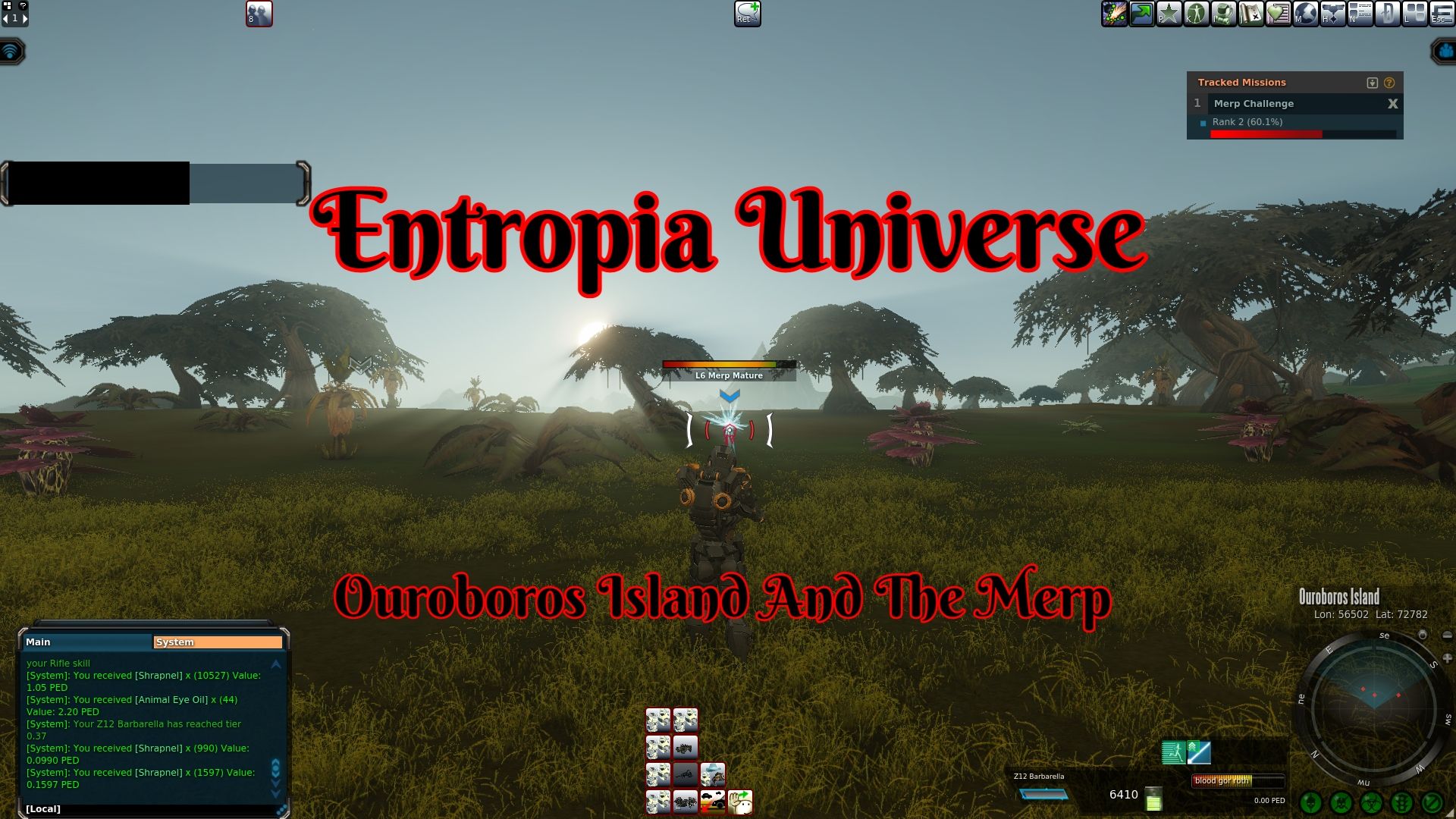 There is always that thrill in the unknown. I spent all that time trying to find a great location with what I wanted. It was now time to find out if I had found it and where it takes me.

After a short walk on the island, I ran into a Merp Young and made quick work of it. I was expecting bigger but perhaps other parts of the island had what I was seeking. So I kept walking. On occasion, I would run into more Merp Youngs.

They seemed to be quite spread out which for owned land is not how they usually like to have the density of a creature. Granted these do have a long aggression range so perhaps the owner did so with that in mind? I think I later found out the answer to what was going on here. 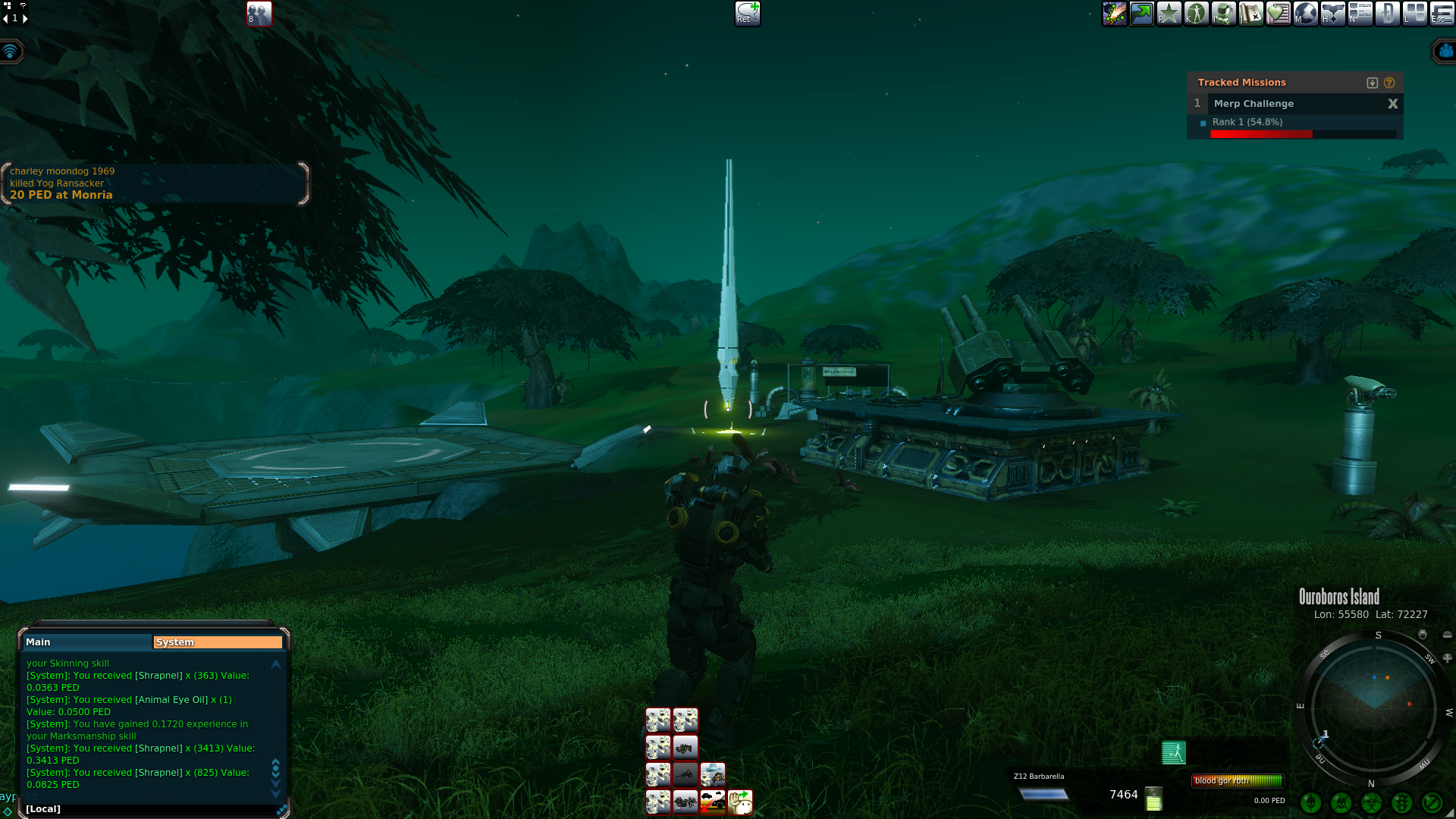 After some more killing and walking, I could see in the distance some buildings. Landowners if I’m not mistaken have to pay extra to develop their lands to have things like teleport and other outcrop buildings other than the fertilizer station.

I had high hopes for this place. Usually, with that kind of large building on it, you could expect to find many services inside. Such as a place to repair, personal storage, and even an auction house NPC. Outside of a couple of tables, it was empty inside.

While that was a little bit of a letdown that kind of stuff can be an experience to put in. Having a working teleporter to get here more than made up for it. I could come back quickly at any time and just go elsewhere for repairs and restocking.

After exploring around half the island I thought I would check out nearby islands. They are almost in a chain. Sometimes the same player owns a few lands in the area and they will spread things out.

The next island over did not appear to be the same owner. It also did not have any Merp on it at all. It also had a much higher tax set for hunting on it so I quickly returned. I ended up touching down in a different location on Ouroboros Island. While the creature was a higher maturity it’s also not a Merp. I kept on finding more and more different creatures as I went around killing.

I even lucked out on a couple of them and had 10 or 15 PED drops of loot. Since most of my hunt was on lower-level creatures it was a nice surprise to have such great luck on higher-level creatures for how few of them I killed.

While I’m no expert on owned lands in Entropia Universe. If I’m not mistaken the fertilizer building on it has to be supplied with the right materials for the maturity, density, and the creature you want to spawn on the land. If not you end up what I keep seeing around this island. 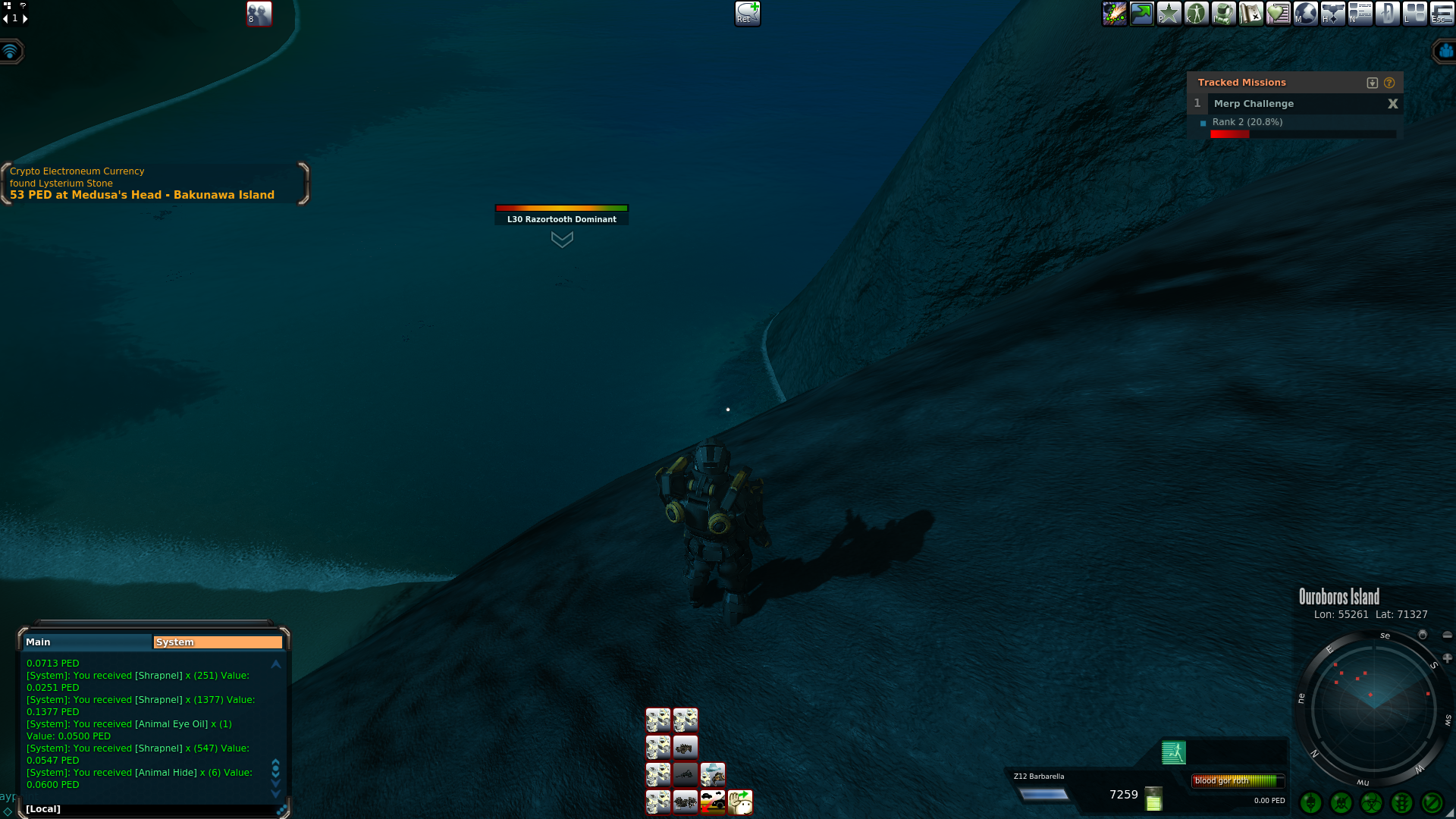 The place after all did feel abandoned. Perhaps at one time, this island was filled with Merp Stalkers. These days it seems to be slowly being overtaken by other things. This seems to be the theme of the day for me.

I decided I would circle the island for a while till my lower-level gun needed some repairs. Then I would call it a trip and end the day. I was also killing some of the higher-level creatures that were not Merp sometimes. However, I was not here for them so I did not want to spend too much ammo on them.

After a while, I got a warning that the amplifier on my gun was about to break and would need repairs. So I started walking back to the teleporter on the island. I thought there was no point in just flying out when I can keep killing and walk there.

Once the amplifier broke I was almost back to the teleporter. Since I had already walked around a lot on this island I thought not why just a few more steps and I would be done.

That is when a Merp Yong decided to run up to me and attack me. Not having any of that and knowing my bigger gun would not be huge overkill I one-shotted it. How dare it attack me after all. I then got a global swirl on what was my last Merp kill for the trip. I laughed quite hard as I was almost not going to kill it and was just going to let the turret at the outpost kill it. Usually when you global the creature has a 50 PED minimum in drops required. While I don’t know what it is for a Merp it’s a lot lower.

A 21 PED drop though not bad for what I was hunting. If loot was not already going great that right there could have saved the whole hunt. It’s a shame the (L) gun that dropped was mostly damaged and not worth trying to sell on the auction house as it tends to have a 120% markup. If only it had been one piece of gear instead.

Maybe next time on non-taxed land I’ll hunt some more Merp. This island was kind of strange and I am going to try and find a different more dense spot. I’d rather be lazy and stay in a smaller area than have to walk around an island over and over again.

It seems my search is still on and I need to scout more locations. At least I had quite a lot of fun. That was also quite the unexpected ending. Which is how most days go in this game one way or another. Despite not finding what I wanted in loot or the creature at the level I wanted. Things ended up quite well. Loot was already going great overall for the trip so I ended up having a decent return. Not bad for a smaller hunt. It even crushed a few of the bigger hunts I’ve done.

Between ammo used and decay on my items, it was 52.5 PED spent. I ended up having 107.22 PED in loot. This more than covered the trip and all that oil I spent scouting around.