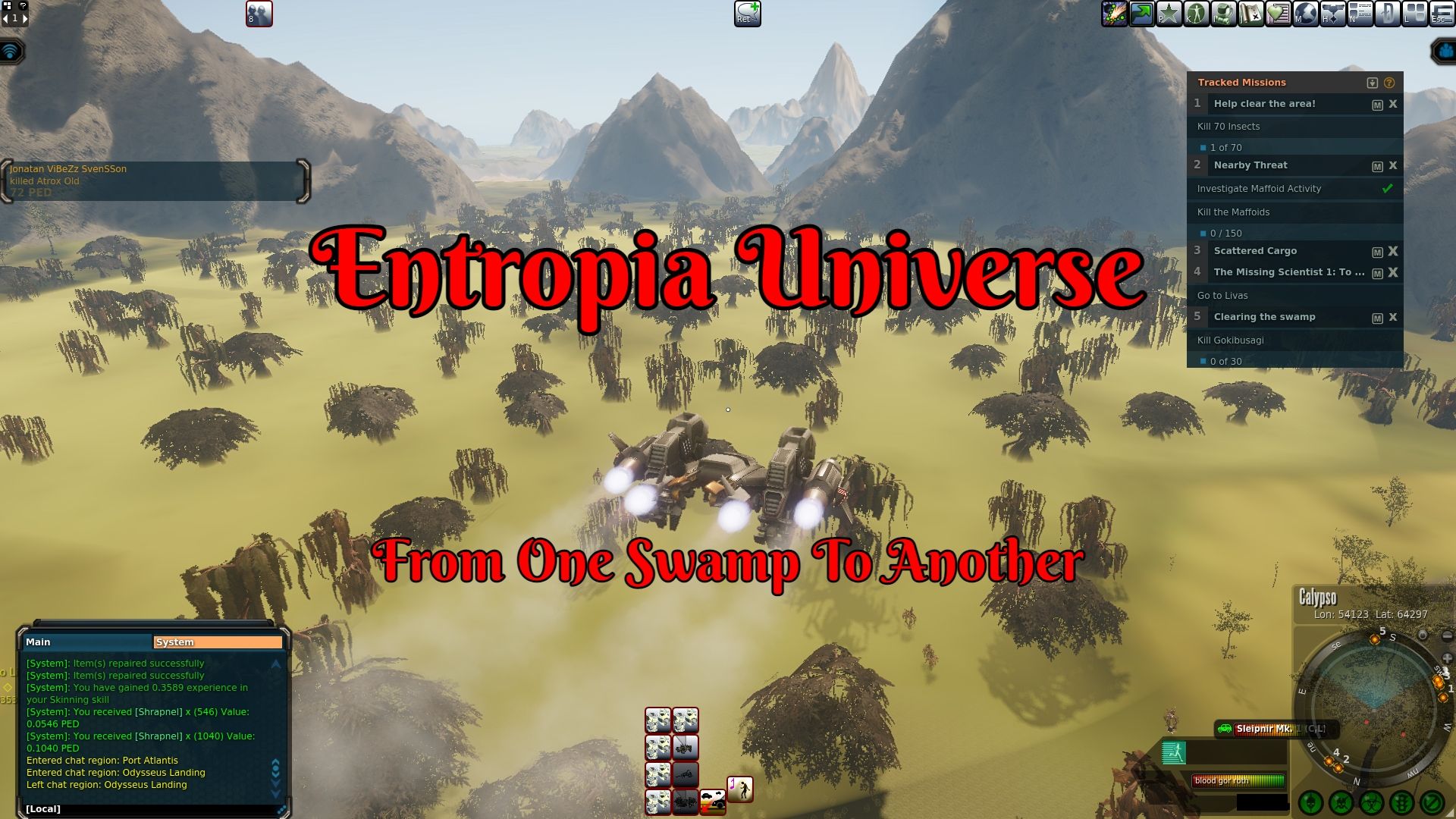 It seems I just can’t escape getting bitten by bugs and other things you find in a swamp. Just the other day I was low-level hunting finishing off some dissensions in a swamp. I have now traveled to an island that has a bunch of kill quests that reward combat tokens.

While not all missions I have on my to-do list were random ones I never got around to doing years ago. Some of them I flat out abandoned for a good reason. I had forgotten why I left this island in the first. The first sign should have been that I already had a few kills racked up. I however did not take that as a warning. 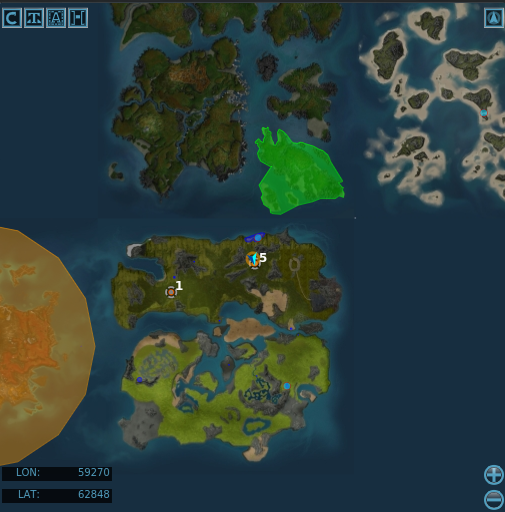 An island that I still don’t know its name and I never care to use to not always be here. Back when they introduced daily tokens there were also combat tokens you would get as well. Those combat tokens could be turned in for (L) weapons among other things.

I arrived at the island itself from the Odysseus Landing teleport that I had unlocked years ago. During my early days when I did not have much PED to my name. I would often go off on random adventures just to unlock new teleporters. That way I could get just about anywhere and not worry again about flying long distances to faraway lands on planet Calypso. 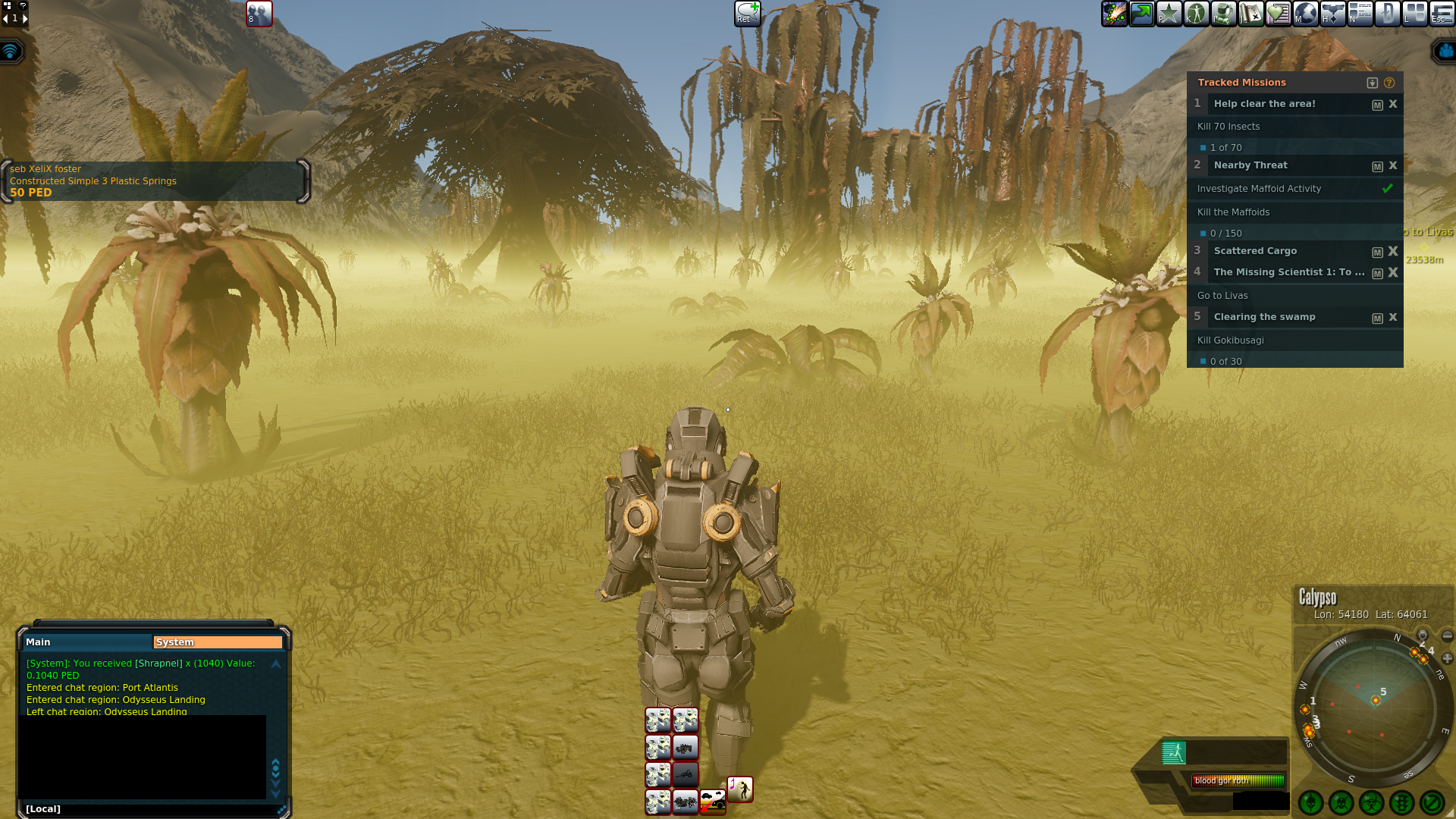 Once I made it to base camp I jumped into my Sleipnir and flew off into the swamp. I’m really glad the first swamp I spent a few hours mucking around in did not have more “modern” fog effects to it. My eyes during the dead of night burned with holy fire from the puke green and sometimes bright white fog that persisted for hours at a time.

The missions here seemed quite simple. I had some Gokibusagi to take out along with some insects. Both of these would provide their annoyance for different reasons as my mind slowly descended into the pits of insanity.

In a lot of missions I have taken on it tends to be rather easy to single target the mission objective one way or another. If you need to take out an X amount of a creature they tend to be all nice and grouped up. This place however has quite a lot of different creatures all mixed. They also all have different aggression ranges. Some things like insects and Gokibusagi have more distance than other things. While at first, that was great that feeling did not last.

One of the biggest issues was dealing with the insects. Because the swamp had lots of patches of water and Entropia Universe has always been strange when it comes to targeting things if it is underwater and you are considered not to be. These insects might as well had their own cloaking devices.

I had to be extra careful to target and kill insects long before they got into range. Thankfully my ArMartrix LR -30 (L) was way over kill and I could two or three-shot the many different species of insects that counted towards the mission. Doing so would later bit back when I noticed my returns for the hunt.

I also opted to switch to my Pixie Adjusted set. The Gokibusagi Providers that I constantly ran into while down there were a bit harder than creatures in many missions I had done before now. While the nearer managed to kill me I was having to take a healing break from time to time.

After I had finished the Gokibusagi I went to turn it in. That is when it dawned on me that the rewards were combat tokens and I had abanded this area years ago. I also looked up and noticed another mission was available and I had yet to finish killing the 70 insects I needed.

Instead of just doing the wise thing and leaving this nasty area. I got this stupid idea. That I could finish off the new mission and the other one as well around the same time. While that was more or less true the combat tokens are near worthless and not worth the cost in my eyes.

The newer mission wanted me to kill 50 Tripudion. I thought that was not going to be a big deal. Since they had less of an aggression range I had left quite a few of them alive while I was hunting other things. They were also easier to kill.

What I did not take into account was the Gokibusagi would also have been respawned and I’d more times than not have to deal with them as well. It would have been one thing if I could have gotten all these missions at once. It’s another that one was a requirement for the other.

It felt like I had to kill almost as many of both creatures before finishing off the quest. All the meanwhile I had endless assaults of those darn bugged out insects. Quite a few times I could not even kill the insects that buzzed under the terrain to the point I would spawn my Sleipnir. Than I would jump into it and fly away. That would give enough distance so I had a chance to target and kill them before they got too close. 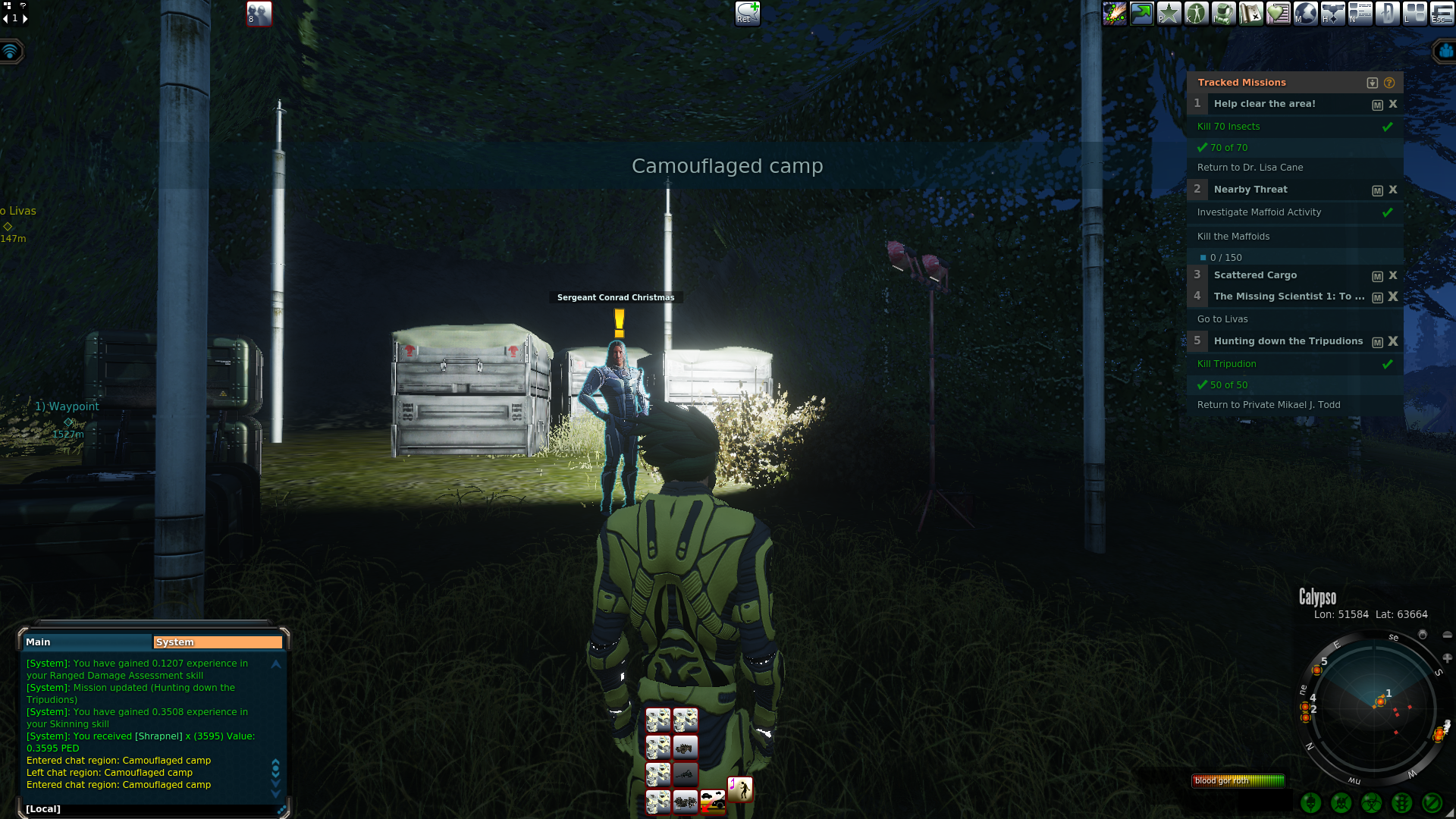 After several days and night cycles. Along with having to refill the 200 PED worth of ammo I had with me. The deeds were finally done. I went off to the waypoint that lead me to some random camp in the middle of nowhere.

Naturally being the fool I was I went off to do the next part. They had me fly quite the distance across the island to get to another waypoint. I thought I was just on a go to the waypoint kind of mission. After some nonsense, I had enough. I went to turn in my other mission for combat tokens and got the heck off the island. 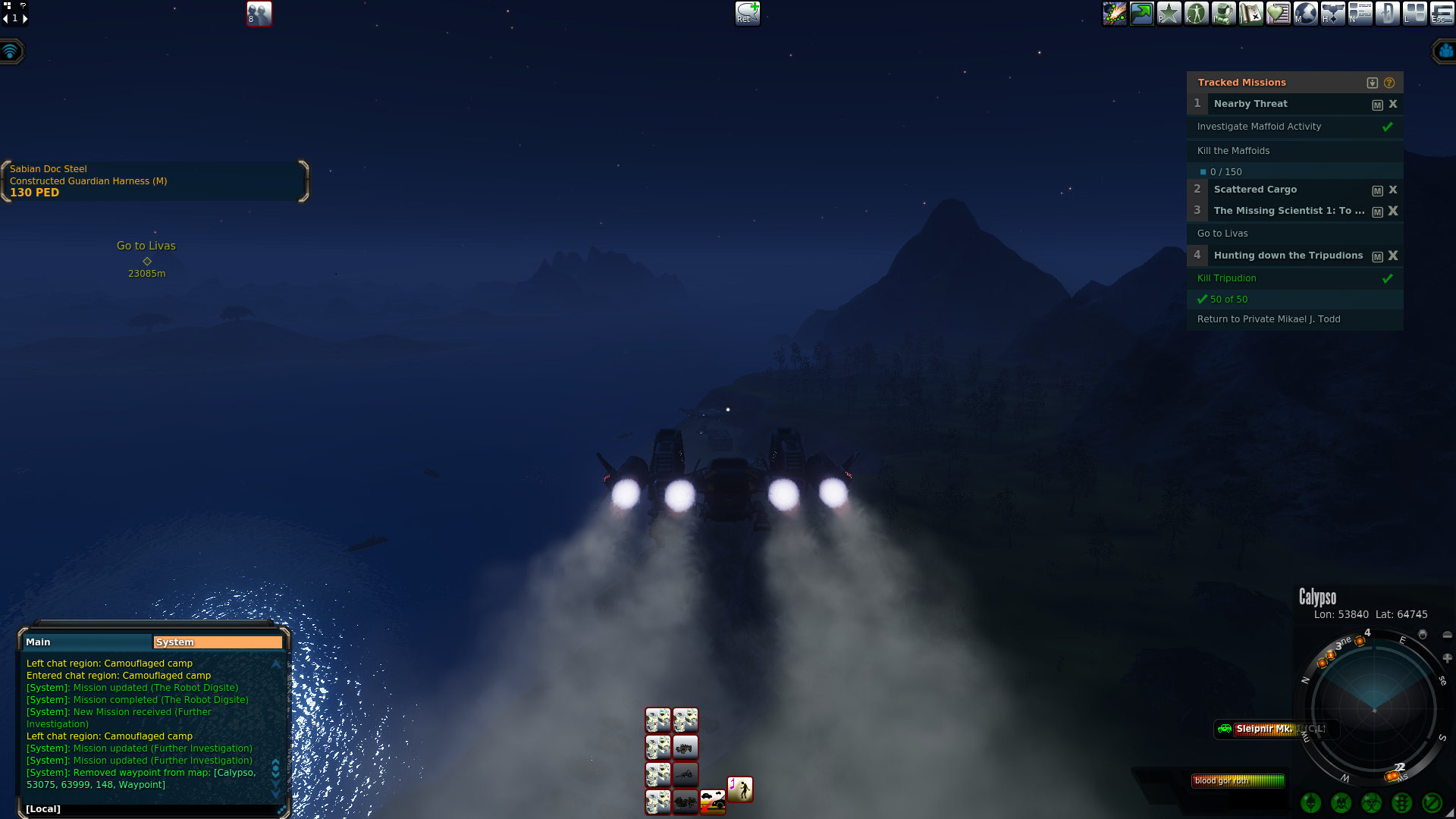 In a game like Entropia Universe, the player needs to learn when it’s time to walk away from doing an activity. The 90 or so combat tokens I earned are near worthless and unless I get many thousands or even tens of thousands more I can’t spend them on an (L) gun. Since they are (L) one day or three of use they will break and be tossed into the trash.

I ended up killing a bunch of stuff I did not need to. At least I got some skill experience and some Codex credit as well. I however took quite the loss for that hunt. I would have been better off if I would have walked away once my eyes started to burn from that puke green fog.