Still in search of a better location of some of the ores I wanted I headed a bit south. This new area had some challenging terrain to overcome. Creatures in the area were not that hard to deal with. The terrain on the other hand would leave some spotty coverage of certain areas that I could do very little about mining-wise. This is another screenshot from my map in Little Big Mining Log. You can see some dots of past ore finds above from a former mining run. You can also see where I struggled with the terrain to get some probe drops in certain areas. Along with dealing mountains, there are also some riverways and lakes in the area. Some of these water systems were even along with the mountain ranges in the area. Sometimes I’d be sliding halfway down a mountain hoping to get a probe drop instead of the game telling me that I was not able to search that area.

Sometimes that plan worked. Many times it did not. If I did find a claim I would have to summon it to an area I could stand on long enough to mine it. Thankfully nothing was out of summoning range in those instances I did find a claim.

The biggest downfall of this plan was the taking damage. As I would slide off a mountain I would take fall damage every time I had a hard landing. While I do have a decent amount of health some of the heights and prolonged sliding I was doing resulted in me getting killed. At which point I would have to fly back and pick up from where I left off.

There were also instances where I would go to land in an area. The moment I got out of my ship I knew it would slide and roll off the mountain or massive hill I was on. It would take a bunch of damage that I would then later have to repair. Along with either chasing after it to pick it up or recalling it to storage and using a spare ship I had on me to keep flying around. At one point there was this massive mountain that I wanted to try mining on. It ended up being a lot taller and bigger than I was expecting. I ended up flying up to the top. There were a couple of shelves I found along the way to drop some probes on. 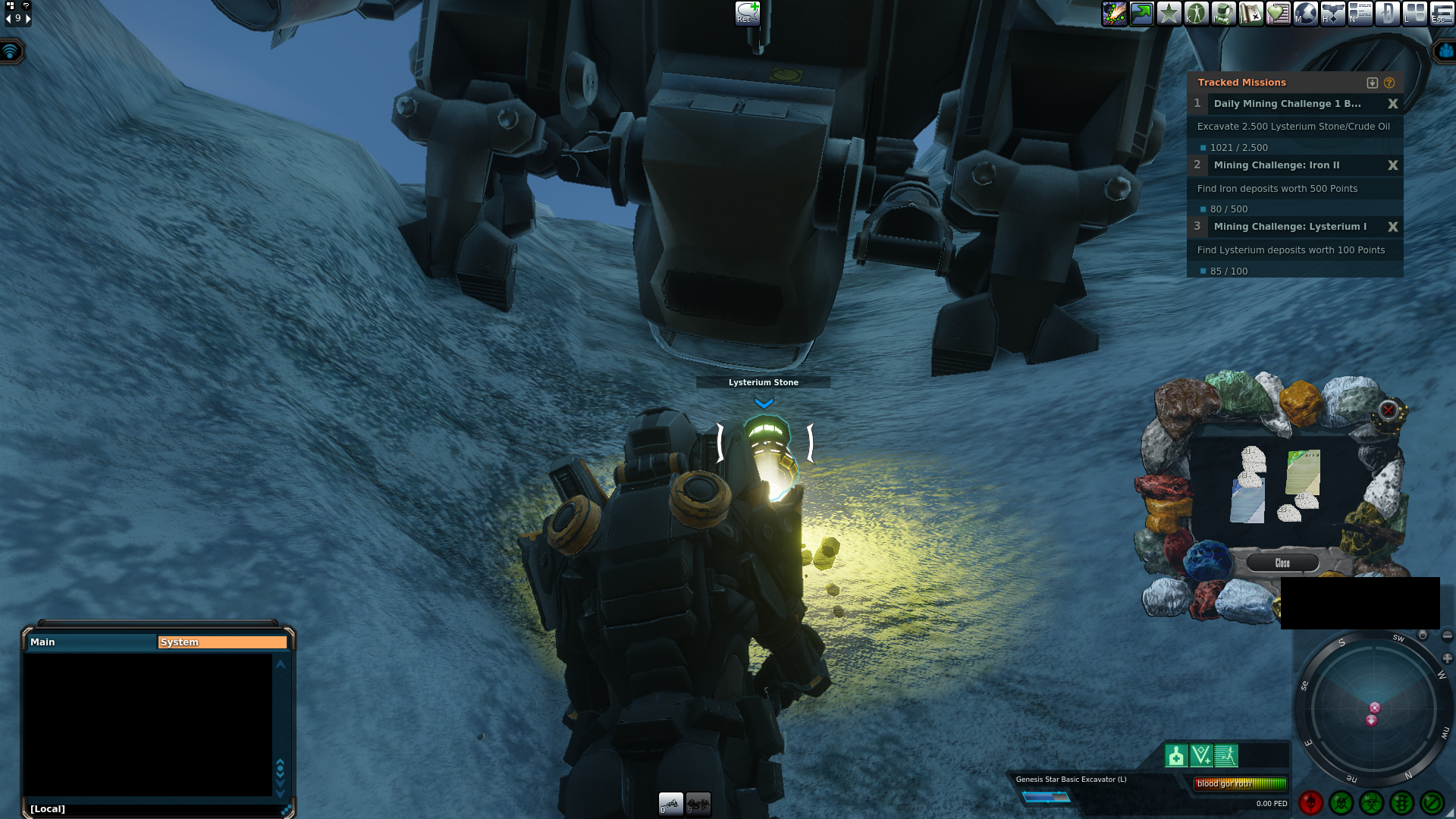 At the peak, I found a massive dip that I dropped into to search for ores. It was not quite wide enough for my ship to fit so I was hoping I would not get stuck up there. This mountain must have been some kind of volcano.

I dropped a probe for ore and found a size 9 Lysterium stone find. Wondering how often anyone ever came up here I decided to drop an enmatter probe and found size 3 of oil as well. It’s a shame the oil claim was not bigger. I was hoping since I had already found a size 9 maybe there was a decent chunk of enmatter hidden away as well.

I then had to get myself out of the hole I was now in. My ship was just out of range of me being able to jump back inside. I ended up bunny hopping up the side of the call trying to catch myself on a triangle part that I then could jump up further from.

After a couple of attempts, I was within range of getting back into my ship. Which I was rather glad of since the nearest revival point was quite a distance away. There were also other shelves on this mountain I wanted to mine on. I then descended back down to the other side and continued my run. One nice thing about these areas I have been mining in has been the creatures in them. While ideally, I would be mining only in areas where there was nothing that could attack me. Not all of my route was clear.

While some of the creatures had a decent and even annoying aggression range. At the end of the day, they often did not do a large amount of damage. As a result, I would drop some probes, and mine any claims I found. Afterward, I would spawn my ship and fly forward to lose what was attacking me. I then would land and keep walking.

One thing I would keep in mind is where I was leaving whatever creature was attacking me. Ideally, I would be dragging them off to the side of my route I either have dropped probes on already or will not be mining. That way when I came back around I would not get aggression toward the same creature again.

This would sometimes mean I’d take a few steps forward to the next area I wanted to drop a probe at. Get aggression on whatever was in the way. Runaway from that spot and wait to be cashed. I would then spawn my ship and fly back forward to where I wanted to mine at. During this run, I ended up finishing off a daily mining mission I had picked up. While most times you only get 1 daily token I ended up lucking out and this one gave twenity tokens. While these tokens are not worth a lot all on their own. Getting twenty put me new a goal of buying a limited gun out of a vendor with them. At the end of this run after markup, I ended up being slightly down. However, I did get those 20 daily tokens which ended up saving this run. What could not be saved however was the next run I did after this to an eastern location.

That next run ended up being a 25% loss after the markup. That kind of thing happening is expected and normally it would not be too big of a deal. The issue comes up to the fact since a huge amount of the total value in ores I’m finding is in iron. I was just not ahead enough in profits on the short term of things to cover it. The downside to getting a lot of low markup ores and even items in this game.

That also ended up being the last area in this region I wanted to check out mining-wise. My next post will be skipping over that losing run which was quite uneventful and moving onto a different location entirely. A change of scenery was long overdue.