Easter Mayhem 2022 in Entropia Universe started on March 30th and ends in under a week on April 19th. While I am joining a bit late one of the reasons I came back to the game was to jump in on this. A lot of whales and regular players swarm in a couple of times a year the game has a Mayhem and other special events.

Quite a few years back I joined in on some random Mayhem events more on the fun side than trying to compete. They can be a bit hard on the wallet. Unless you get super lucky and get a drop or insane amount of tokens to buy something off a special vendor. Still, they can be fun and since the Mayhem tokens that drop carry forward maybe one day I’ll end up cashing some in for something big.

There are two different kinds of Mayhem 2022 events going on. The first one called Mayhem Annihilation has you killing robots in an arena for points. The other one is Mayhem Defense where you need to defend CDF Data Interceptor for up to twenty waves with increasing rewards for each wave from robots. I am skipping the defense one for you and going for Mayhem Annihilation. In Mayhem Annihilation you need to select one of four mission tiers and that is what you have for the event. Each mission level has 10 levels all ranging from some universal ammo up to Mayhem Easter eggs, Codex progress, and a bunch of other stuff.

Since I’m joining a bit late and I know these things can be quite the drain on the PED card I decided to select the Bronze mission. The first reward is at 700 points gained and the final requires 7k points. On the other hand, the whales in the game will be grinding most of this event with the Redulite mission requiring 100k points to fully finish. 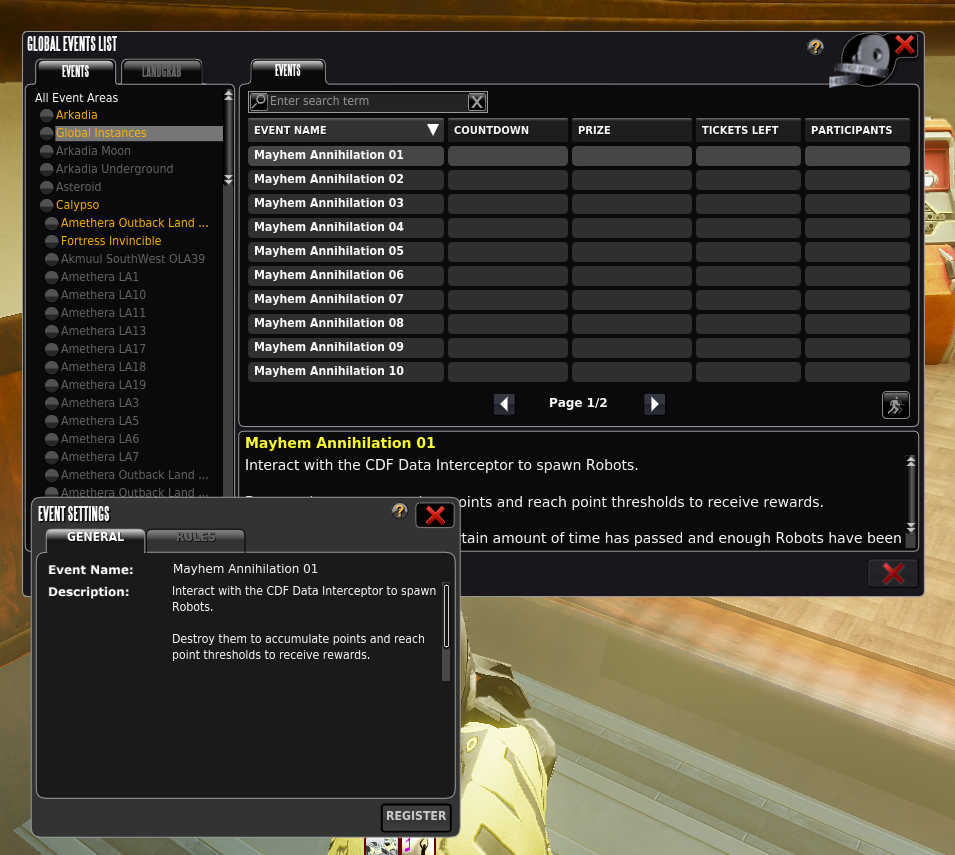 Each robot killed in the arena has a chance to reward 0 to 2500 points. The arena itself is an instance with 10 difficulty levels to select from the global events page. You can change, get killed in, and open a new one as you see fit. Once you kill enough robots in them a boss will spawn that you hope rewards quite a few points and some goodies.

I was tempted to go for the Silver mission at the start. I’m rather glad I went for bronze instead. When you think there is a chance to gain 0 points for a kill you would think that be on occasion. At the level I’m doing it’s quite common. I even went a good ten minutes or longer sometimes without getting a single point let alone the 700 I need for each tier of rewards. The instance arena itself is a nice little area. The instance lasts for a maximum of five hours. You have to activate a beacon in the middle for it to start.

Once the event is activated there are a few decent places you pull to without getting run over by the robots you are hunting. With the weapon I’m using, it was quite easy to almost pull any robot in the arena from where I set up. The arena is even set up with a place to perform some basics things. You can repair, sell, and buy more ammo if needed. What is lacking is a storage device so you need to bring in everything you are going to need for a long grinding session.

There is almost nothing worse than your last gun breaking before getting another boss. Since they only spawn after so many kills and a certain amount of time. I made that mistake in my first long grinding session. I make sure to take in a few guns ever since.

Since I’m doing the bronze mission I thought I would try the lowest instance. I’m just returning to the game I’m a bit low on supplies. I did not have great gear for dealing with stab, cut, and electric damage.

I found the first instance to be a little too easy. I seldom needed to heal and after about five minutes I step it up to Mayhem Annihilation 02 instance. There the mobs hit me enough that I would need to heal more often. I was however hoping to rack up more points. Since the robots in the second instance had more health they took longer to kill. After quite some time of the boss not spawning I got concerned I was not killing them fast enough. I was also getting so many zero-point kills it did not seem worth the extra cost and time.

Loot in this style of event tends to be not great. You get mostly shrapnel that can be turned into universal non-sellable ammo. You can also get an Easter Strongbox but you need to buy a $1 key each to open. There is also a chance to get non-tradable Mayhem tokens among some other Mayhem-themed stuff. Thankfully before I left to go back to the Annihilation 01 instance I got my first little global for the event of 72 PED. While not great it was needed and welcomed. 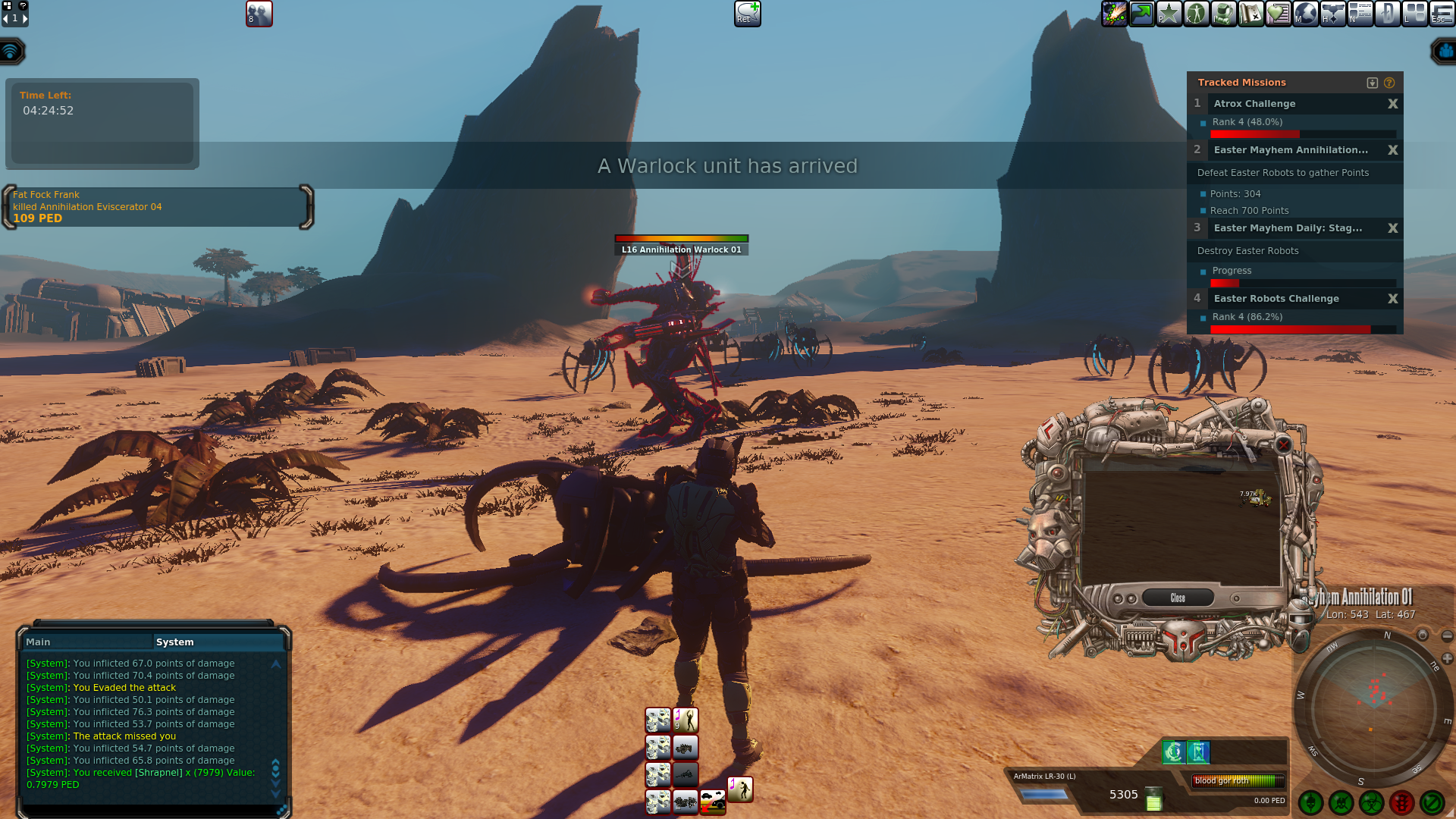 After a fair bit of grinding, I finally got the boss an Annihilation Warlock to spawn. These tend to at least drop a token and an Easter Strongbox. While they are usually zero points I did have one give me 100 once. Which helped my score out quite a lot. It was also easier than I was expecting to kill it. There are some other things you are working on as well other than getting points for the main mission. One thing I don’t recall being around when I use to play a lot was the Codex on different creatures in Entropia Universe. One of them is for the Easter Robots and as you can see my selection of one of the rewards for level 7 of it was decent. I ended up picking something that improved my aim if I recall. Overall I was gaining some decent skills during this event. 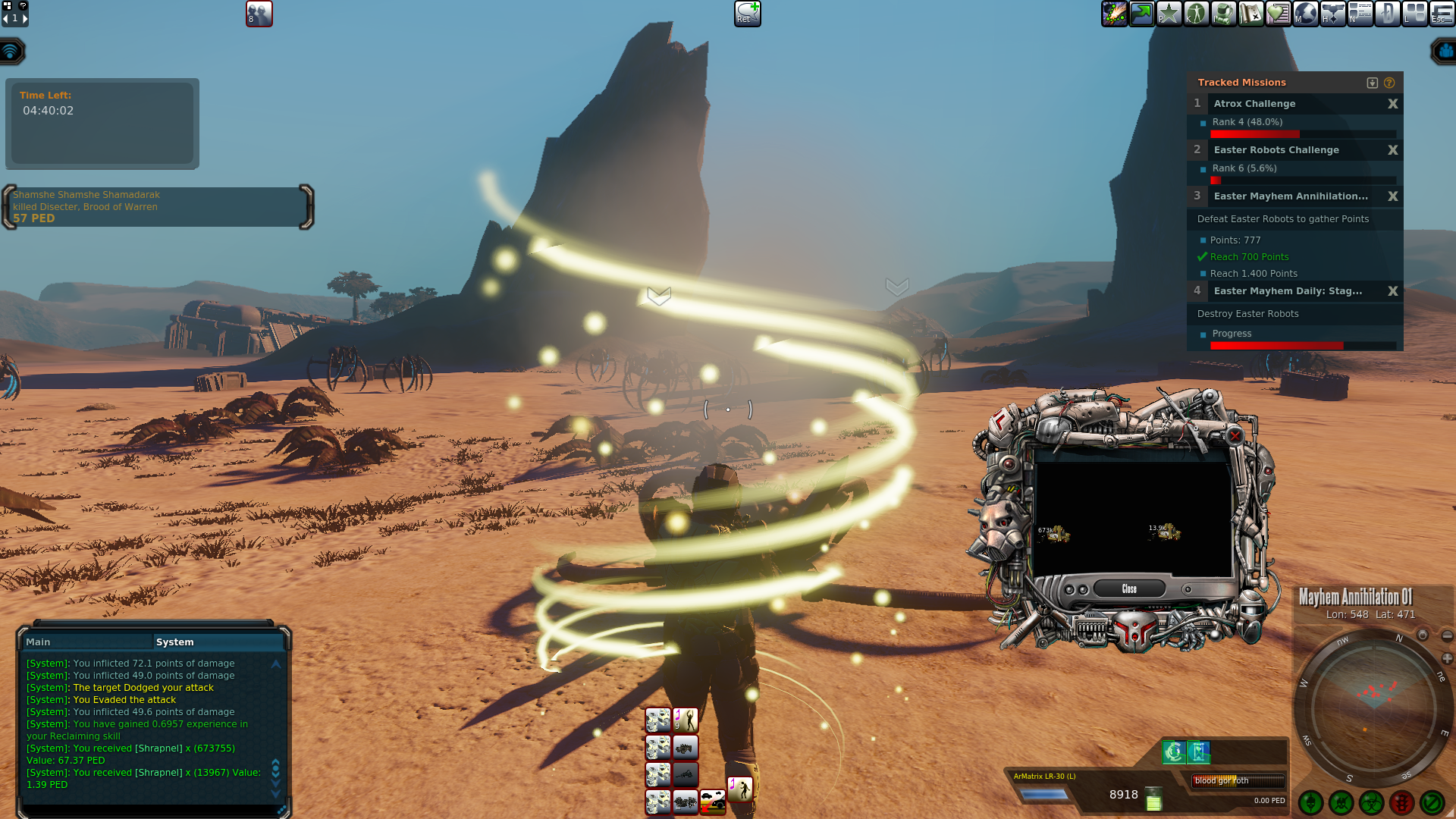 After a few more hours I got my second global of the event. Nothing that great another small one of 68 PED. This would also be my last global at least for now. While I did get the occasional 20 or so PED drop they have been rather cheap. I ended up grinding for a big chunk of a night and part of a day just to see how far I could get. I was hoping to have a lot more points by now. I’m even tempted to go back to a higher instance since I’ve gotten some slightly better gear and should be taking a little less damage from hits.

For now, I’m at 1015 points of the 7k I wanted to reach the last tier of the mission. I have also been keeping track of my costs and I’m down 431.9 PED. If this continues without some kind of luck chance I’m expecting to be down around 2,978 PED. This is a lot more than I’m willing to toss into this event.

I wish there was some kind of saving grace. At my level there really is not. The Easter Strongboxs I’m getting is not even selling from the looks of it for 2 or 3 PED. The whales might only want them for a chance at a rare Mayhem and normal Mayhem tokens. The big items in Mayhem boxes tend to be the special event ring which from my understanding also has an instantly low chance of drooping during the event. While some have them listed for 7k PED and up only a couple sold in the 5k range. I don’t know anyone who has gotten one.

While some rings from 2020 are worth something like 30k PED. These Easter Ring for 2022 are not. While it has a higher than normal critical chance on it than those rings. It has no other stats which seems to be the turning point for the Entropia Universe community. They don’t find it exciting when there are much better rings out there that offer a few different stats.

Since the boxes are not even selling on the market I thought I would buy some keys and try opening some up. I mostly got ammo covering the cost of the key. Along with some pills for short buffs for an hour. It’s quite clear why the Mayhem boxes are not selling for much. Not to mention the people in the higher instance are farming up a lot of them. As far as the Mayhem tokens I’ve been looting. You need a rare one which I don’t expect to ever see for what I’m clearing if you want anything good off the vendor. Along with a lot of the normal Mayhem tokens. I’m up to around 60.

While I could go buy a couple of consumable buff pills off the vendor that would be the extent of that. You also can’t seem to sell them in the auction house. Although you will find a lot of people who own shops selling them for a couple of PED.

Something like the guns or the armor on the Mayhem Token Trader many see as long-term goals. Since the next Mayhem event will drop more tokens you can just save up. I’m sure many of these special items are worth thousands if not more. They are what a lot of people who grind Mayhem events are after. I’m tempted to try a bit longer and at least see if my luck changes at all. With a couple hundred more points I’ll at least get the second reward and work on the Codex more. I don’t expect many of these lower rewards to have much value.

I have at least been having a blast and who knows what could happen. I also have not tried out the defense mission yet. I don’t expect to get far with my level weapon. Still, I could get some rewards for my effort.