Mayhem Defense in Entropia Universe sounds like an interesting challenge for an event. You would need to protect a CDF Data Interceptor node from waves of robots. First-time success would give a special reward and allow you to progress to the next stage.

I was not expecting even the lower stages of the event to be so time-consuming. On the surface, it does not look like too bad of an event. There are twenty stages in total and while I did not expect to get far. At least quite a few different ranges of players could partake.

What was interesting was that each stage had ten waves or as they call them phases of robots. It even seemed that before you were about to finish the last phase another phase would spawn. Requires you to think a bit about what you wanted to kill and leave around.

I knew going into it that I was not going to have the best gear. At least for the stages I did, it appeared to be a few different types of robots you would run into. Defense Eviscerator, Defense Warrior, Defense Warlock, and an Elite. Some of them did melee damage while others ranged and even debuffed. 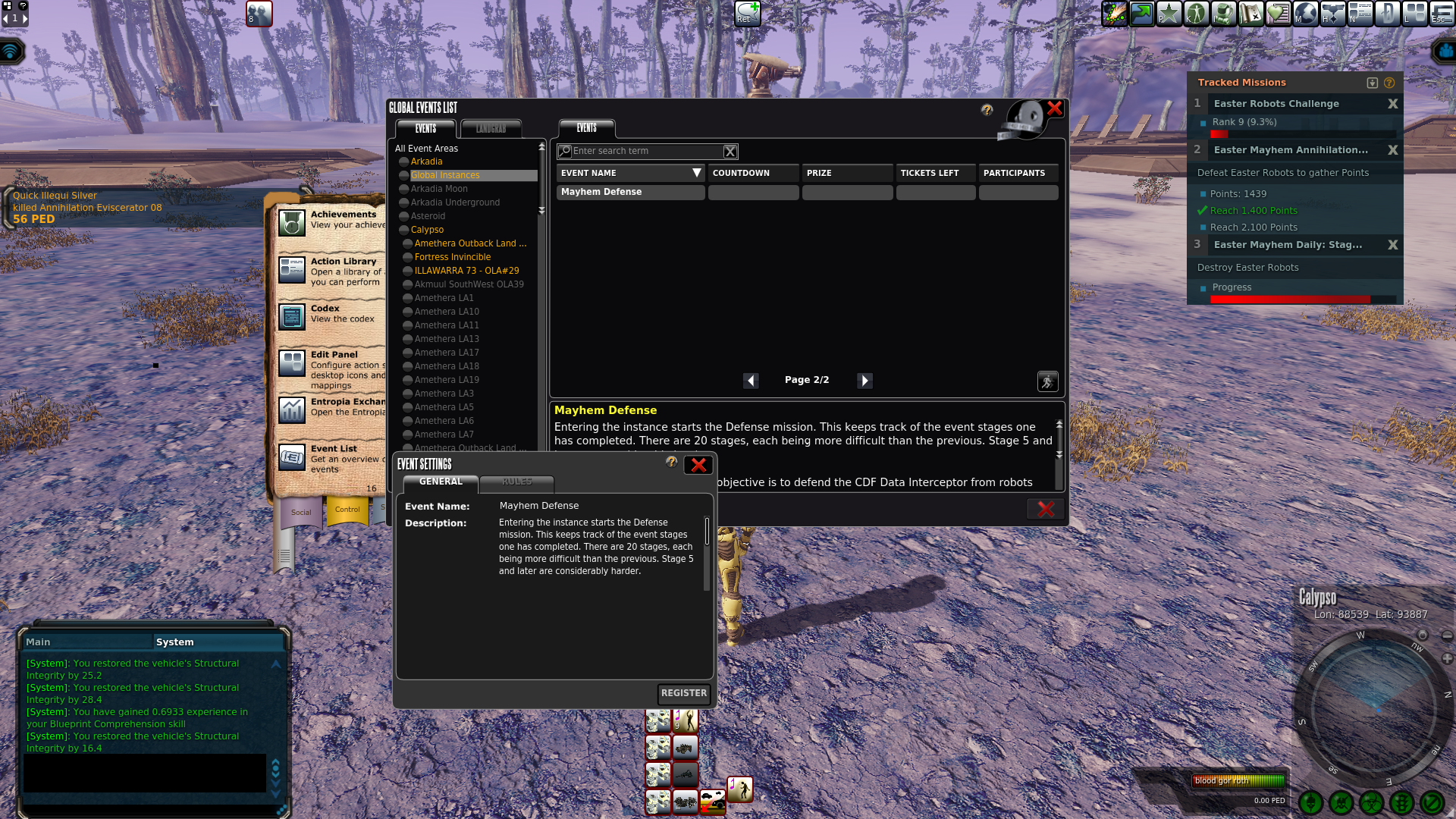 To get into the event itself you could do it through the events page. This allowed you to anywhere in the games universe to jump into the instance.

From there you were greeted with an arena. Large enough that if you had some decent range and damage you could kill a few robots before they even got close to the CDF Data Interceptor. The issue with doing that is you would be far away from looting them.

You also could not repair gear as needed after you activated a stage. Between stages, a repair station did spawn in so you would not have to leave. While you would not think that be an issue. I soon discovered I was taking around 30 minutes to clear a stage. I can only assume the harder ones take a lot longer.

While I would not expect most things to break in that amount of time. I know my amp on my gun is good for around an hour of killing before repairing it is a good idea. Things would also get a bit crazy during the phase that you did not want to be messing around with swapping out a broken gun or removing attachments.

This is also one of those events where popping an auto looting pill is a good idea. It’s kind of a shame everything in the arena did not just auto-loot. I would not be shocked if I had missed a corpse or two and whatever they had dropped. Once you were ready to go you could active what stage you wanted as long as you cleared the lower stages. Then the fun would begin with phases of robots attacking and you hoping you are prepared enough to meet the challenge.

For the first stage I’m glade I was a little over-prepared in my eyes. My main weapon made quick work of the first few phases of robots. The issue with that and hunting in Entropia Universe is overkilling a monster is a waste of ammo. Thankfully I had a small finishing weapon ready to go and it was ok.

More time than not though I was more in a rush to try and get anything attacking the Interceptor node off it and onto me. As such, wanting to switch weapons or not overkill things was not always a priority.

While I could have gone in with a less powerful gun I would have ditched it after a few phases in the first stage. As stronger robots would get added into the mix I wanted more damage.

This was also my first time doing an event like this. I did not have that much of a strategy going into it. I had to come up with my method as I went along. While also adapting quickly to the situation.

One thing I decided since this was a lower stage was to use the life on the Interceptor node as an advantage. The win condition is the thing does not reach zero. There are no bonus points for trying to keep it above a certain percentage of health. So many times I did not mind things were hitting it. 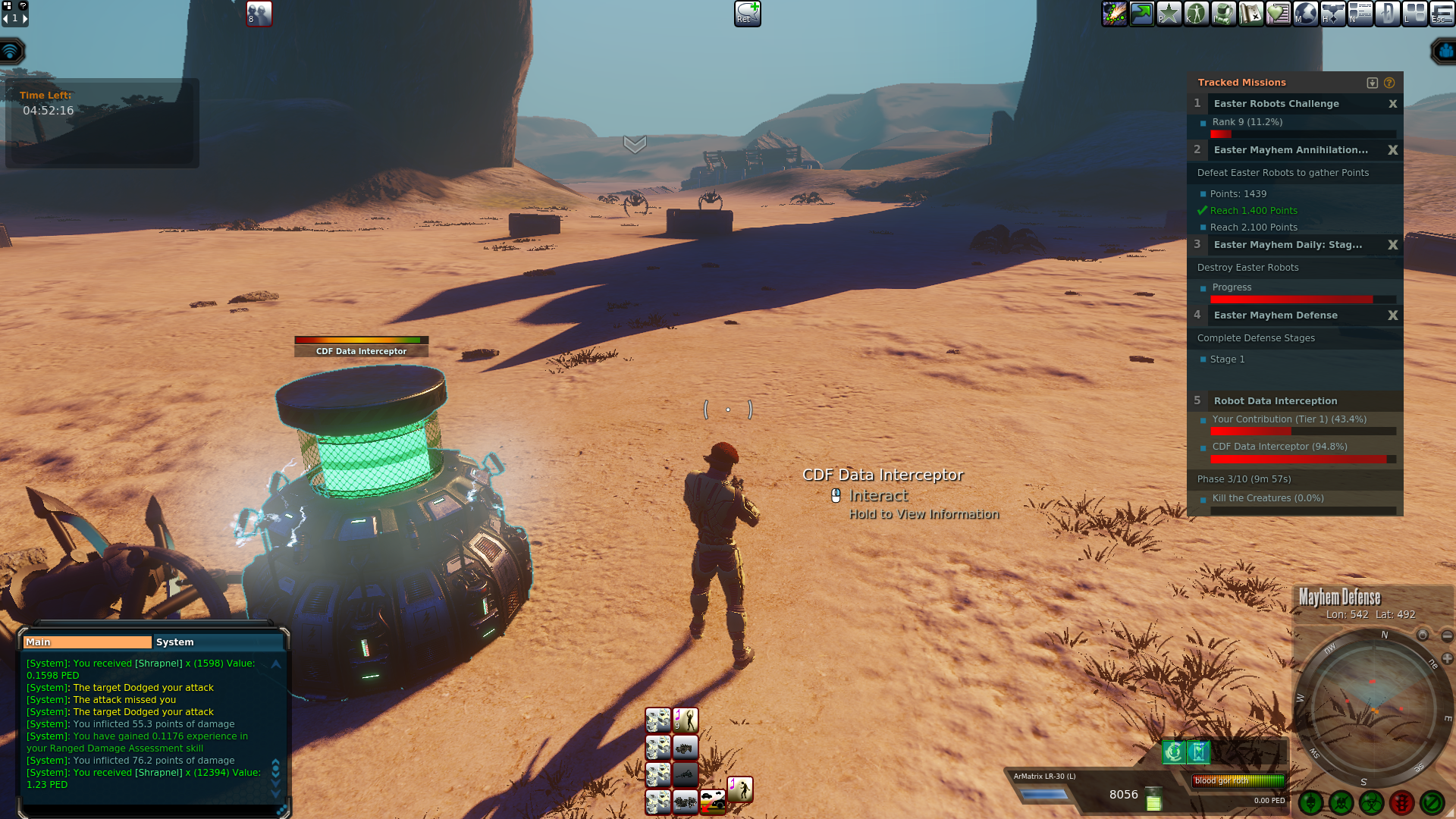 One thing you are constantly dealing with is the robots are spawning in all directions more times than not. During the later stages that made things a bit harder as you need to very quickly take a look at everything that spawned in. Then you needed to decide which robots you would pick off first and which ones you were willing to get closer to.

It was not uncommon for me to kill things out of my looting range. Once in a while, I would try and make a rush to one side to loot anything and then to another to kill and loot. If I did not care about looting whatsoever I would have taken advantage of my range on the gun I was using more. Here I was at phase 7 without much of a care. At least the first stage of this event was not that hard for the gear, skills, and weapons I had. I did not even need to heal and the robots I could let get a few good hits in on the Interceptor without much worry.

Before I know it I was at phase 10 of the first stage. A warlock spawned and I decided I would just focus him down first. Many of his friends decided they wanted to attack me instead as they were not going to kill the interceptor with 62% life remaining anyways.

While I ended up breaking even for the ammo used to finish stage 1. I was out of the full decay bill. I was expecting it to be worse with how much overkilling I was doing. So I considered myself lucky. I remember feeling that it was easy enough that I might end up making it through several stages of this event. The game did give a warning after stage 5 things would start to ramp up hard. So I went into next stage 2 without much thought about it.

It turned out to stage 2 was going to be a bigger challenge than I was expecting. For starters, I was now starting to take damage. Not like a little damage maybe I’d drop a heal every other phase. It was I’m going to need to stop shooting to heal a couple of times each phase.

The robots now were also doing some decent damage to the Interceptor node. Not an alarming amount but I could not be as casual as I was in the first stage. If I was not careful they might have a chance if I dropped the ball on this one. I decided to change up how I was going about things just a little bit. Once I had a couple of robots within range of dealing damage to the Interceptor node I would tag them with my weapon and start having a few chasing me around while I try and kite them if needed.

It seems like unless you are overkilling them you are just going to have to tag, kite, and hope you don’t get killed before you kill them. You don’t instantly lose if you do get killed from my understanding. I would not know as I managed to live the entire time. Having a giant ball of death set loose could do a number on the Interceptor node so I was not willing to try it out. There were moments when I was not sure I would make it to the end. I was tagging a bunch of melee robots to come chase me. I had a bunch of ranges robots raining down death onto me. It was quite the experience since more times than not in Entropia Universe you are looking to avoid having a bunch of monsters decays your gear all at once.

At one point I stopped even looking around at what was new to spawn in. I did not take many further screenshots as it was no longer the time for doing so. I was in a kill or get destroyed way of thinking. Anything I came across had to be dealt with.

During the last phase, I focused on the Warlock that spawned in. I expected it would be dealing damage that I did not have a lot of resistance for. I also know it would take a fair bit to kill. To my shock, the Interceptor was still above 50% so I could let it take some damage and I sure did.

During the heat of combat and needing to kill lots of robots the timer on my auto-loot pill ended. The robot's corpses were stacking sky-high and even making it hard to click target things. I ended up fumbling around for what felt like forever in my inventory to take another one of my auto-loot pills and watch a flood of loot come in.

After killing quite a few more I looked up to notice the field was empty. The thought went into my mind that I had just failed somehow stage 2. It had been a while since I check how far along I was into the phase and how much life was remaining on the Interceptor node. Thankfully that was not the case. I had beaten stage 2. I also know I was not ready for stage 3. While that would have been nice it was time for me to call it for any further Easter Mayhem stuff. The loot had not been that kind to me for doing this and Mayhem Annihilation.

The nice thing is there will be more Mayhem events in the future. Some players do plan months ahead of time and stockpile weapons, ammo, and other supplies. For just jumping back into the game and not having anything prepared ahead of time. I felt I did alright. I did not even think I would be doing this part of the event.

It was quite a fun experience and that is what it’s all about at the end of the day. Perhaps the next Mayhem I’ll be ready enough to push things a lot harder than the casual approach I went this time around. Joining in at the start will also mean I have more time to work on the events.