There are always more things that I want to do in Entropia Universe. That however requires acquiring the right skills, armor, and weapons. With quite a few things being rather scarce I thought I would try my luck to see if I could resolve some of what I needed on my own.

In the medium term, I want to be leaving the planet calypso and taking a short trip to a space station that you can go hunting on called Crystal Palace. For that trip, I need to increase my damage and hit by less than 2 levels each for a better weapon. Along with acquiring a set of Gremlin and Armor Mk. 5B plates.

First the bad news. The 5B plates are player crafted only. Only so many people ever had the blueprint to make them very few are active. Having such a blueprint is almost like having a money printing press and that market is heavily controlled.

To make matters even worse. You need 7 plates for a full set of gear. One of the main crafting ingredients is mostly farmed by people who already have B5 plates and are looking to upgrade them which requires more of them to dismantle.

At the very least for the right price, I can get the plates. There is usually one full set of plates at any given time on the market. It is quite crazy just how controlled and restricted the market for them is.

As far as the Gremlin armor set itself it’s a bit hard to track down. There are a couple of people willing to sell the full set to me. They however want around double the asking market price for most of the pieces for doing so.

The good news is some of these pieces can be farmed on the planet I’m already on Calypso. At least that is what it looks like after looking into loot tables assuming they have not been removed. I don’t have 100% certainty about their current state of dropping. 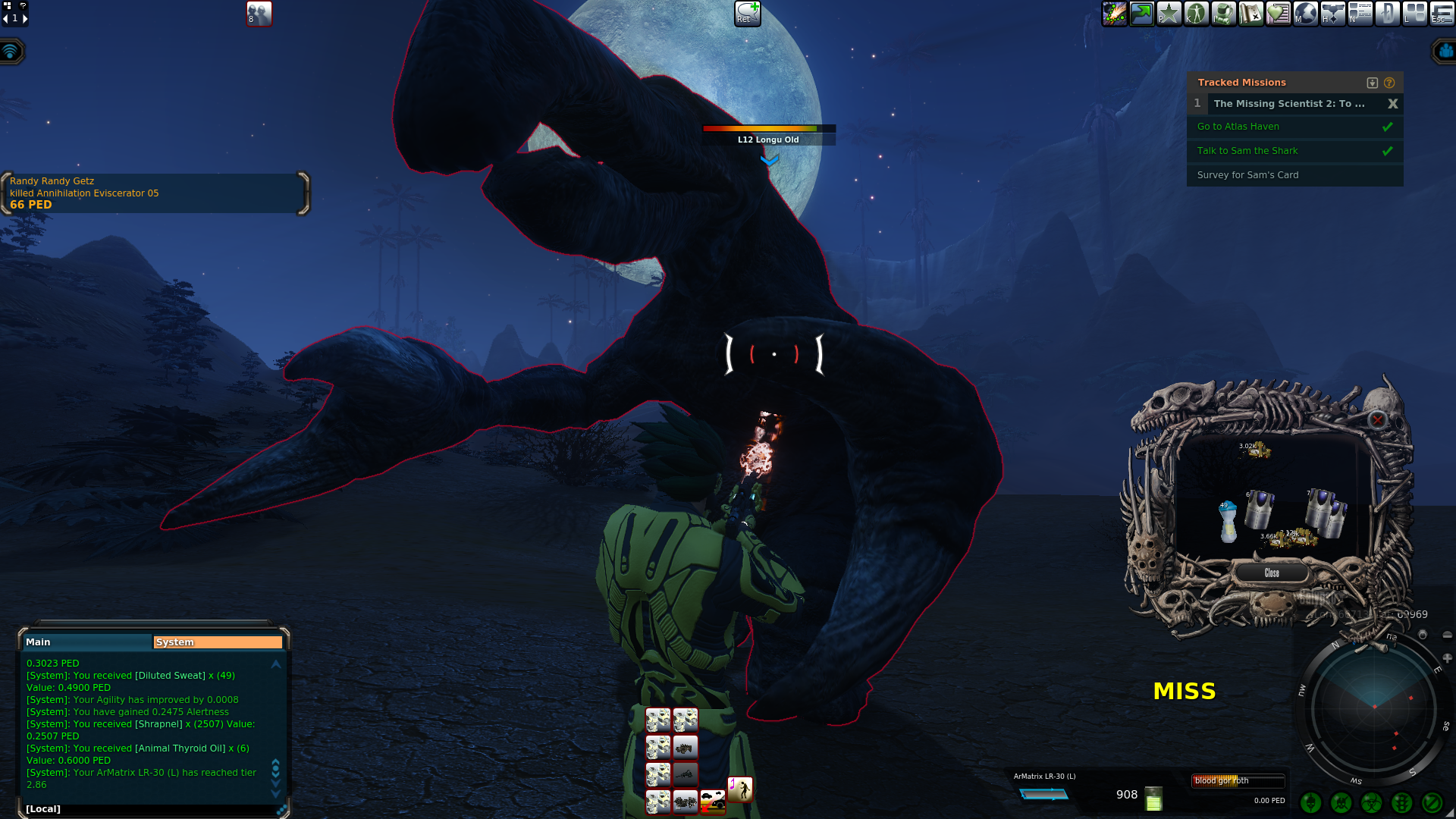 Longu on the Entropia wiki has 3 of the 7 gear pieces I need as possible drops. They are however very rare drops. Not impossible rare but there is a high chance that I won’t get any of them to drop. If a single dose drop, it could be the female version that my male character can’t wear.

Hunting Longu also gives me the chance to continue skilling up my weapon skills. On top of that, they have a codex that I can work on for killing them. Where I can get some extra skill experience as I level it up. 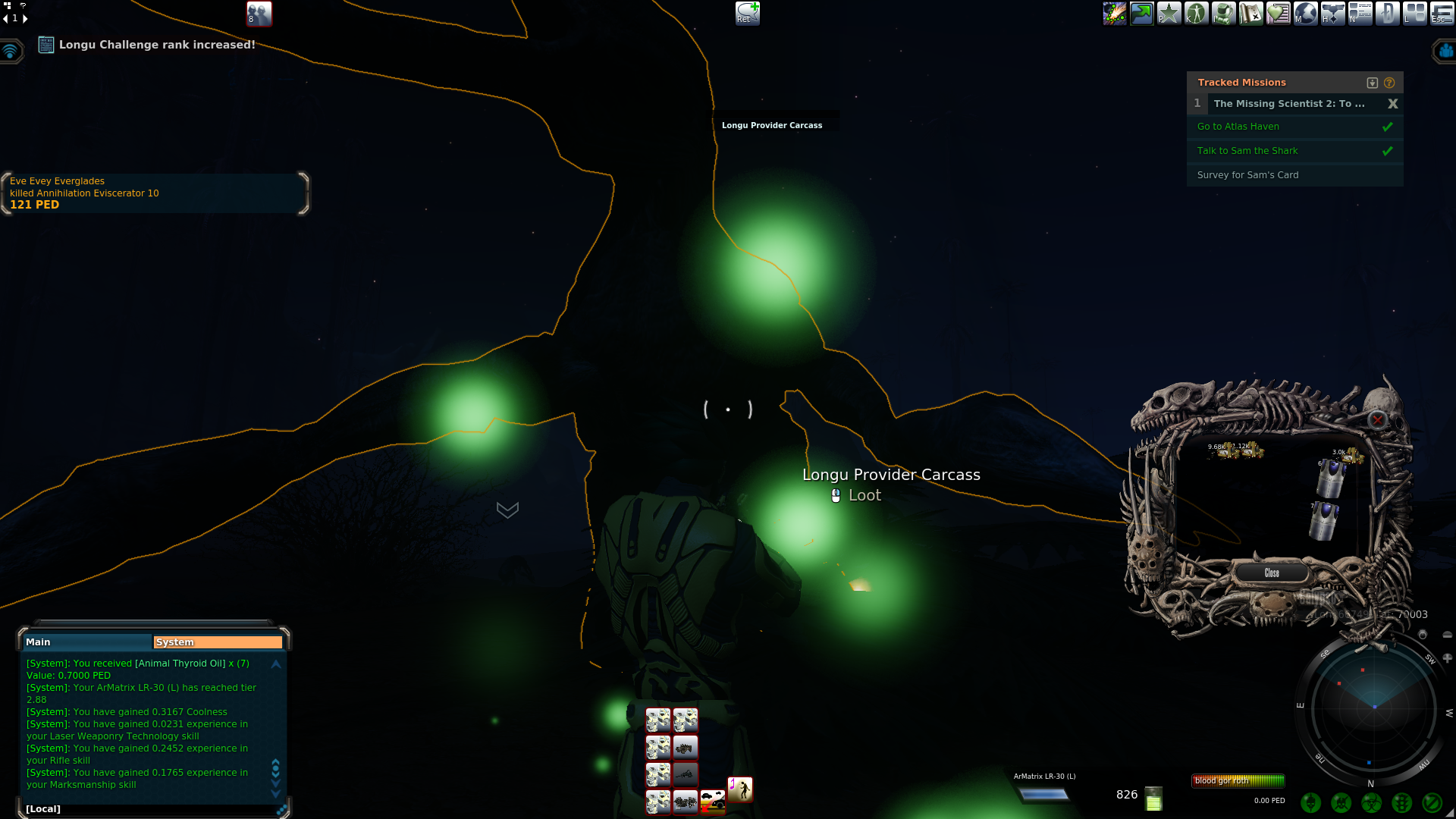 I have also never or rarely hunted Longu before. This allows me to hunt for something new. Along with getting to see what drops. There is also some instantly rare stuff on the creature’s loot table according to the wiki as well. Most of my issues would be solved if I just got some crazy item if they still drop and people are still paying crazy prices for them.

After doing a little bit of research I found a decent tax-free area at Notus with quite a few of them. While my Pixie Adjusted with 2A plates in them is not anything amazing. I have such a high evade skill that getting hit for 40 damage on occasion is not that big of a deal.

I can take them down decently fast. As such, I went for an area that has slightly higher levels of Longu. I’ll mostly be fighting Longu old and providers. They do have a slight regen of health but that is not an issue for my damage output. 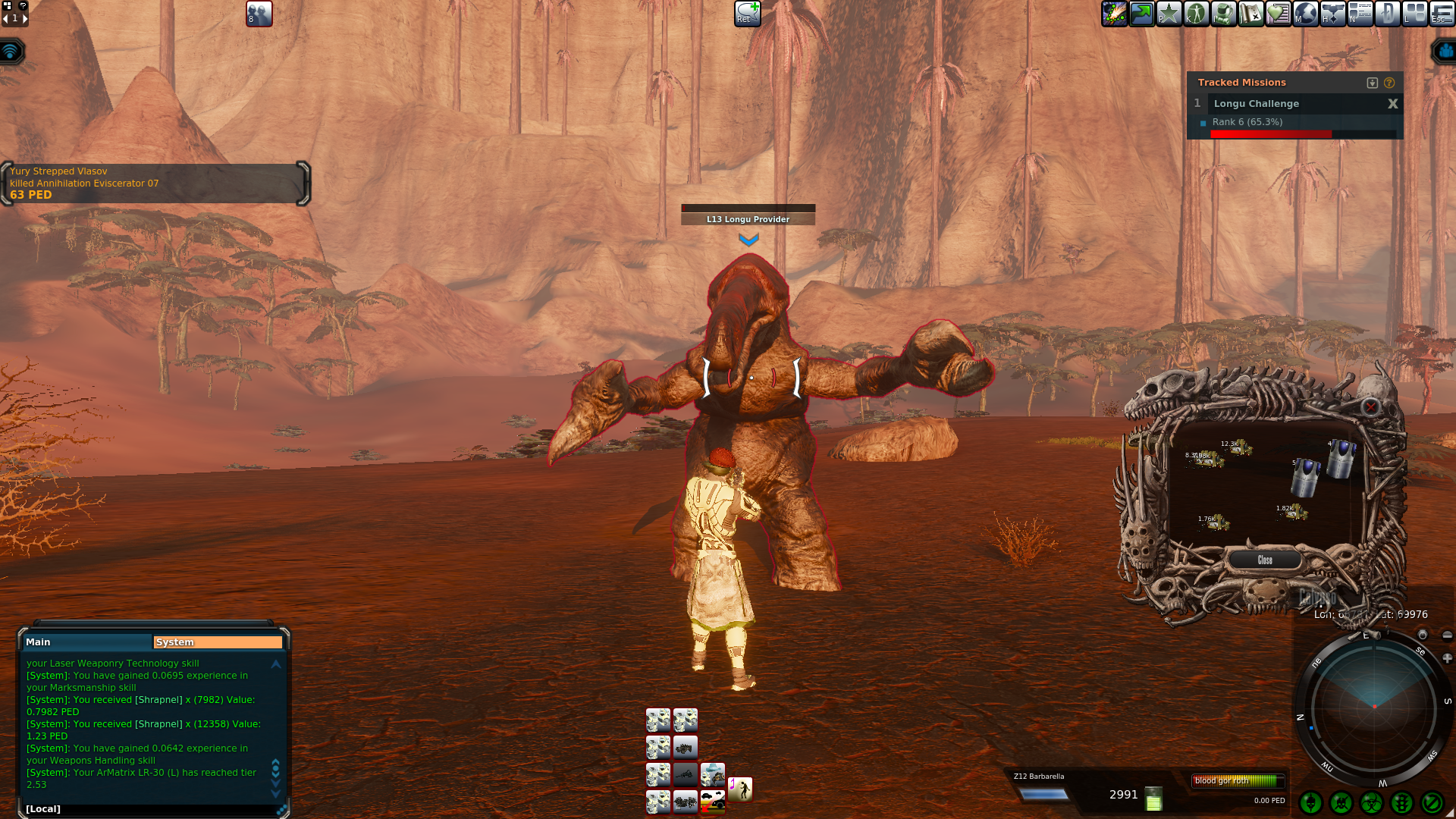 After killing a few I realized that there is a high chance I need to use a finishing weapon when fighting either of these types. A finishing weapon deals less damage so you end up not overkilling wasting bullets.

Which is an issue a rifle like my ArMatrix LR-30 (L) can have. I could be hitting the thing for 70 points. It could have just a tiny sliver of health left. I have a smaller gun that will do 8 damage to finish it off. More times than not I just need to single fire when they are almost dead then switch over to my finishing rifle if it’s needed.

After getting to know Longu after a little while they are not even close to hunting something like an Atrox is. Which tends to be what I prefer hunting for quite a few different reasons. There are quite a few pros to hunting Longu so I am liking them more for now.

Unlike Atrox Longu have quite a small aggression range. Short of having one almost spawn onto of you. You don’t have to worry about them attacking you first. In my many hunting trips that have only happened twice.

Oddly enough while the Atrox I hunt is much higher level the Longu are doing a lot more damage to me. Instead of doing a more spread-out attack over a few resistances. They are quite heavy into impact damage. So when you get hit you feel it.

One of the reasons I love and hate Atrox is they tend to global and you need them to do a decent amount of times. Otherwise, you are just losing your behind and fast. It can get nasty. Even when you do get a global you could still be down.

Out of the 1k PED worth of ammo I’ve used so far in hunting Longu I have yet to get a single global. While I am down a bit I was expecting it to be a lot worse than it ended up being. Which oddly makes me like them even more.

Longu at least from what I can tell is more into giving a lot of minis in drops. Something quite smaller than a global but a lot more often. I had some runs where I was getting a lot of decent hits. Along with some runs that I knew were going into the red quite heavy.

It does make it a little harder to judge how a run is going when you can’t base it off if you got a global or not. For a hunter like myself, we keep an eye on our ammo and loot as we go so we have somewhat of an ideal usually. I have noticed the area I am hunting in can sometimes have strange respawning issues. Sometimes I’m struggling to keep up with the respawn. In those instances, I just sit on this hill and pull them to me. I get to take my time and heal as I needed.

Other times I’m clearing the place out struggling to find something to hunt. Since this place is right next to a teleporter it’s not uncommon for there to be 2 or 3 other players hunting in this area as well. There has been a moment of everything as far as the eye can see has been cleared and nothing for over 10 minutes. I wish I could say I had some crazy drop. That however never happened. So far no gear drops either. Which I’m not shocked has not happened. The highest markup drop I ended up getting was 2 Tier 4 Components that have like 500% markup. I however only got 0.54 PEDS worth. For now, I’m going to save them and hope to have more in the future before trying to list them at the auction house.

In the end, I did 5 200 PED hunting trips. Once you add in decay for weapons and armor among other costs it’s a bit higher. After I take out all the loot I got and include the small amount of markup it had I’m down 5.7% from this. For not getting any global or anything with high markup that mostly seems decent. While not the result I was looking for it could have been a lot worse. 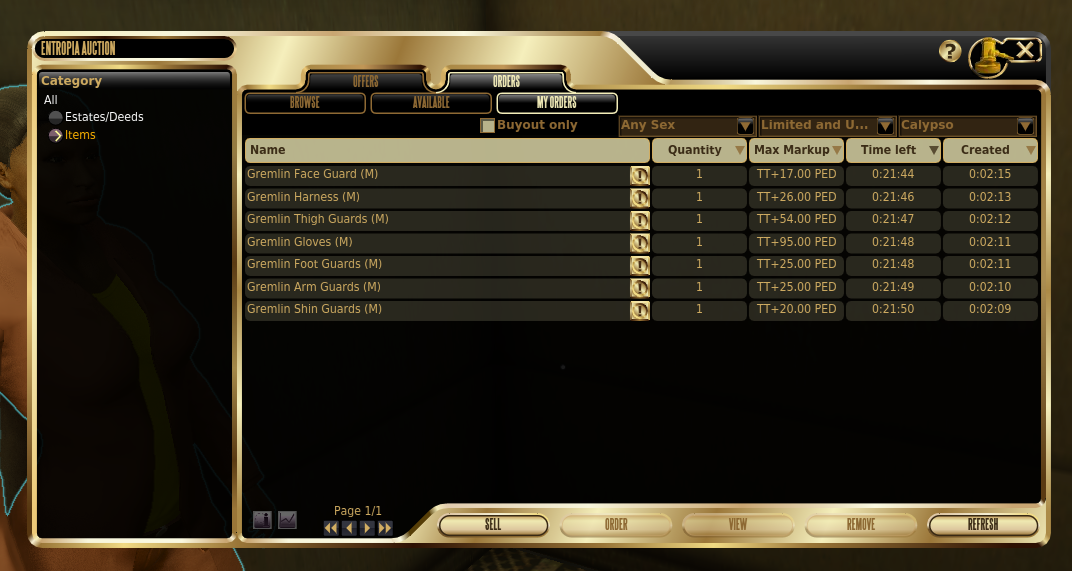 Since I did not make any headway so far on getting Gremlin pieces for the day I thought I’d take a shot in the dark and use the function of the order in the auction house. I put up a buy order for around the monthly selling price for the gear I want.

Maybe someone will list one for that or lower. Someone with a stockpile of this gear could also be checking in for such orders and selling me some gear as well. I have no idea for now.

While I wish I could keep these up full time till I get all the pieces I need. There is a 1 PED listing fee per day. So I’m paying 7 PED (70 cents) in fees for 7 listing items. On top of that, you need to put up the full TT value of the item and markup price. Which is keeping a large amount of my bankrolled tied up without having anything to show for it.

I just hope if I do end up getting some buys off this it is more than just the gloves. For whatever reason, the glove has a much higher markup than other pieces. To the point, I put a much lower amount than the average market sales have been over the past year. It seems like some market manipulation and I’m trying to be careful. Granted they could just be harder to come by as well. 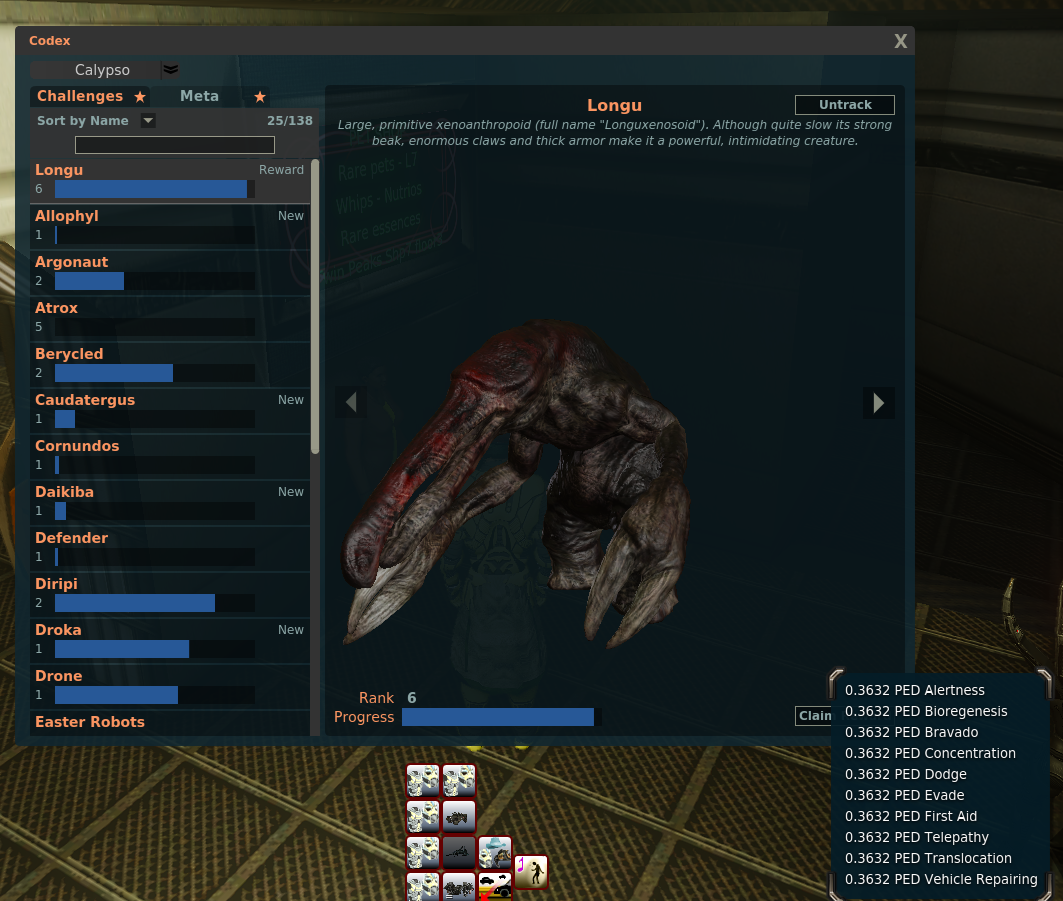 I also did get some skill experience. I expect it will still be a lot more grinding till I have enough experience for the gun I want to use. At least I got a lot of progress on the Codex for Longu and the rank 5 rewards have left me struggling to pick one for a reward.

I have yet to decide if I want the alertness, doge, or evade. I’m also somewhat leaning towards some of the others as well like first aid. It’s tempting to take the evade. However, it looks like my dodge is two-thirds lower so I would get a bigger gain selecting that. Such a hard choice. 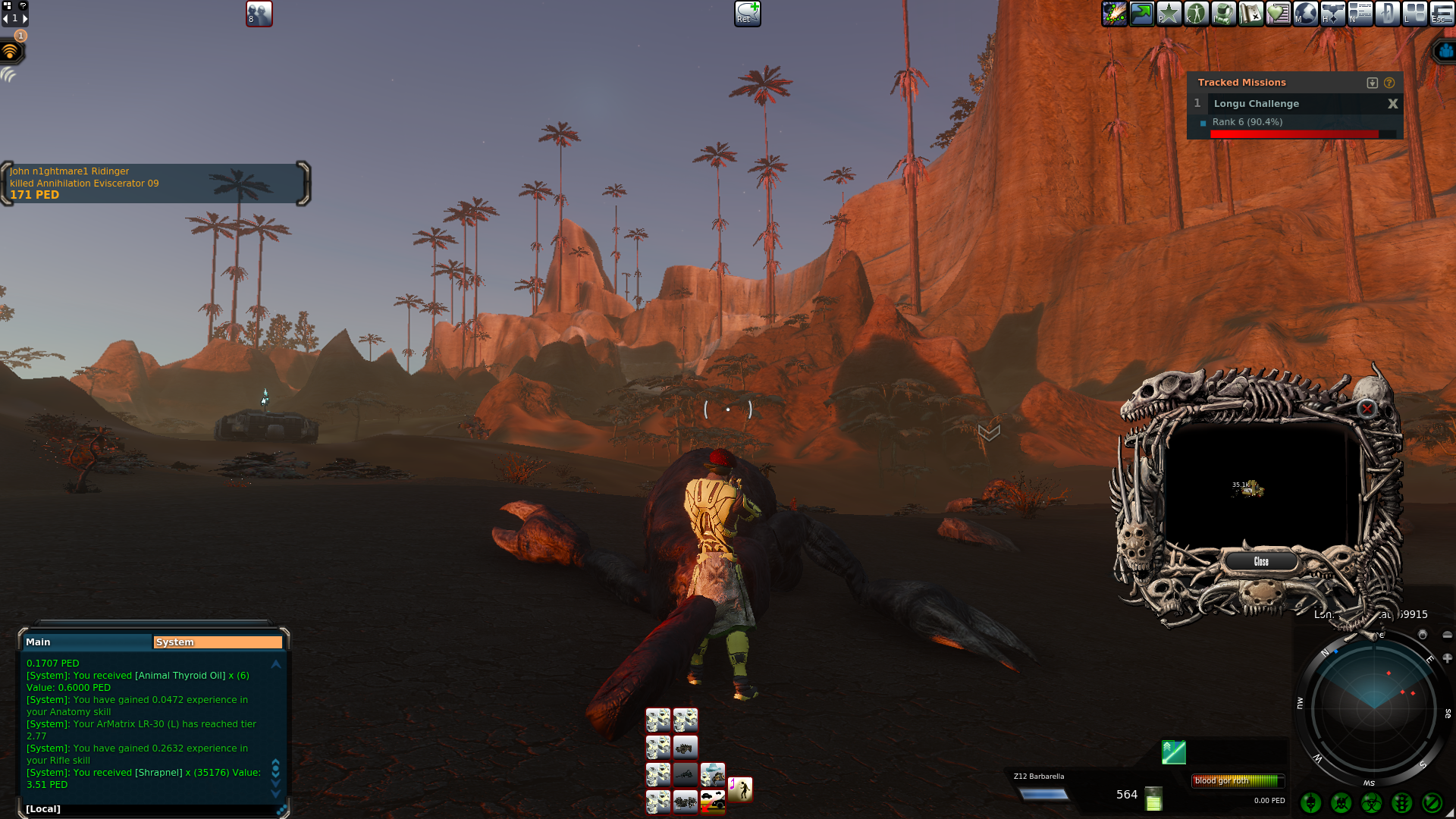 While these hunting trips and my goals of getting set up for the future things could have gone better. It was fun to hunt for something new. I’m also rather happy with the spot I found. I more than likely will try hunting these again. I might even try some harder ones though this seemed to be fine for me.

For now, I got to wait for a few items at the auction house to sell. I also got to wait on a couple of other things in-game. I’m not in any rush to get all the gear and skills I need at the moment. It would be nice to have some of them secured.