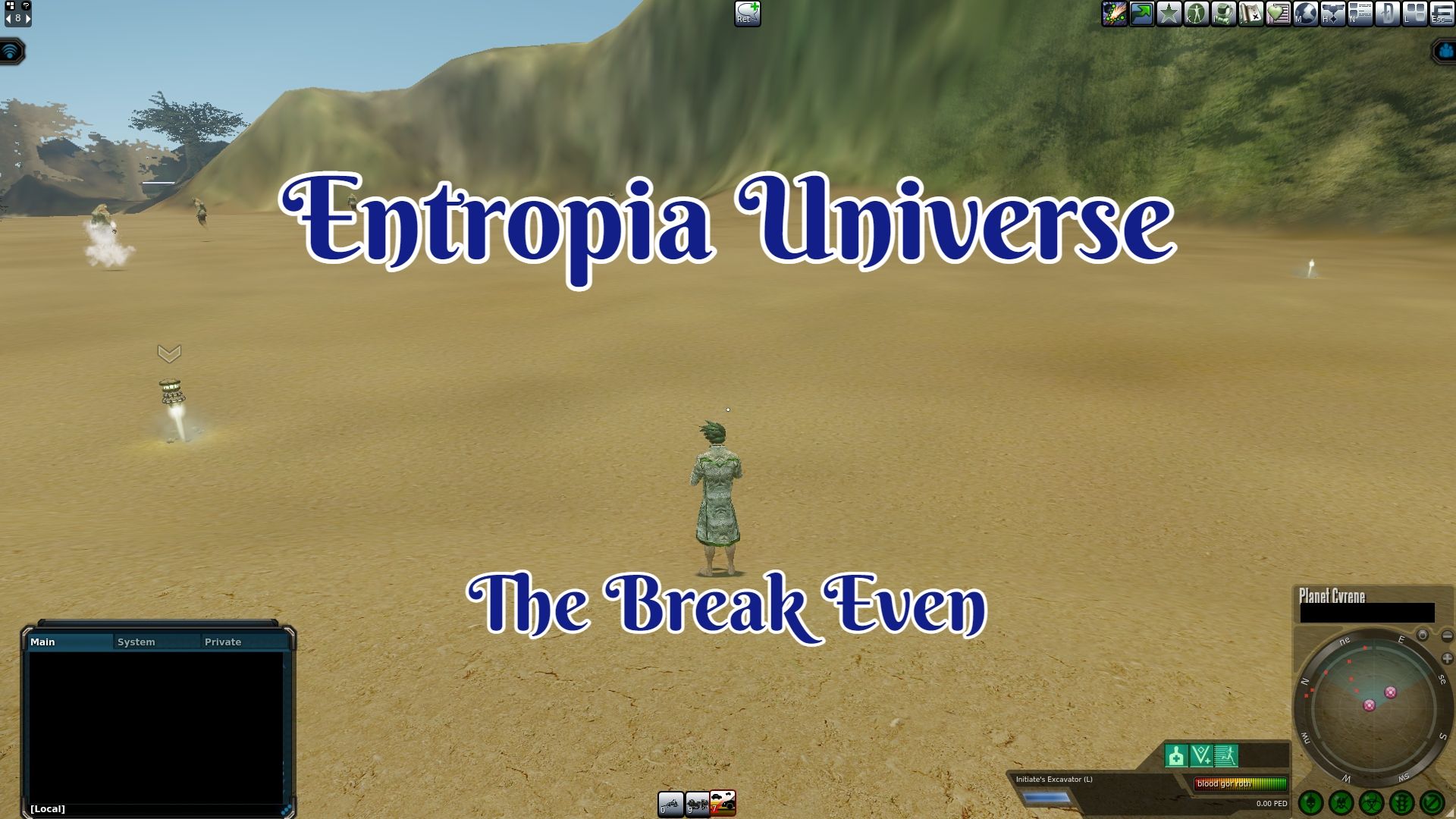 I’m starting to get decent coverage now and the location of a lot of different ores and enmatter on Cyrene. There were still a couple more resources I wanted to track down. This run would find me a couple more.

I was out again in different locations double dropping probes as I have been in past posts. It has been going overall a lot better than I was expecting. I almost love the double-dropping style to a point that I might want to stick to doing it more often even after I’ve finished exploring mining on Cyrene.

I am somewhat shocked this run did not go slightly better. One thing I’m not showing what it was or where land-wise is one of the mining materials I found. While I did not find a lot of it the markup on it is better than anything else I have mined so far on Cyrene.

When it comes to quite a high markup enmatter or ore there is usually a reason for it being so. More times than not it tends to spawn in smaller claim sizes. This is something I’ve seen over the years when I use to mine higher markup ores on planet Rocktopia. You would get a lower TT (trade terminal) average than you would mine something else but the markup was more than high enough to make up for it.

I also did not find anything larger than a size 5 on this run either. Many players would be thinking if you break even on a run and that was the best you got that was luck. I found quite a few size 4’s and even 2’s. This must have been the culprit after some of the markups I found of it not being a better run. This time I did find some areas I might be looking to avoid in the future. They are what I call natural player funnel areas. These tend to be terrain or creature spawns that funnel the player into a small area the width of a mining search.

One such spot had creatures on both sides. There was a tiny path in between the different spawns that you could run through without getting aggression on anything. While I would assume some miners might skip over this spot since they were some nasty creatures they did not want to risk getting attacked by.

I could also see a large number of miners getting brought into this area without even trying. As there was terrain nearby slopping you towards these spawns naturally. Then, they would end up mining exactly in the same spot as everyone else who found themselves here since I was the only way to move forward unless you are flying around and not just walking.

I did happen to find a couple of claims in that area. Perhaps I’m just being a bit superstitious. It could have also been that no one has been there for quite a few hours due to the time of day. Either way, I extracted what I found and move on elsewhere. 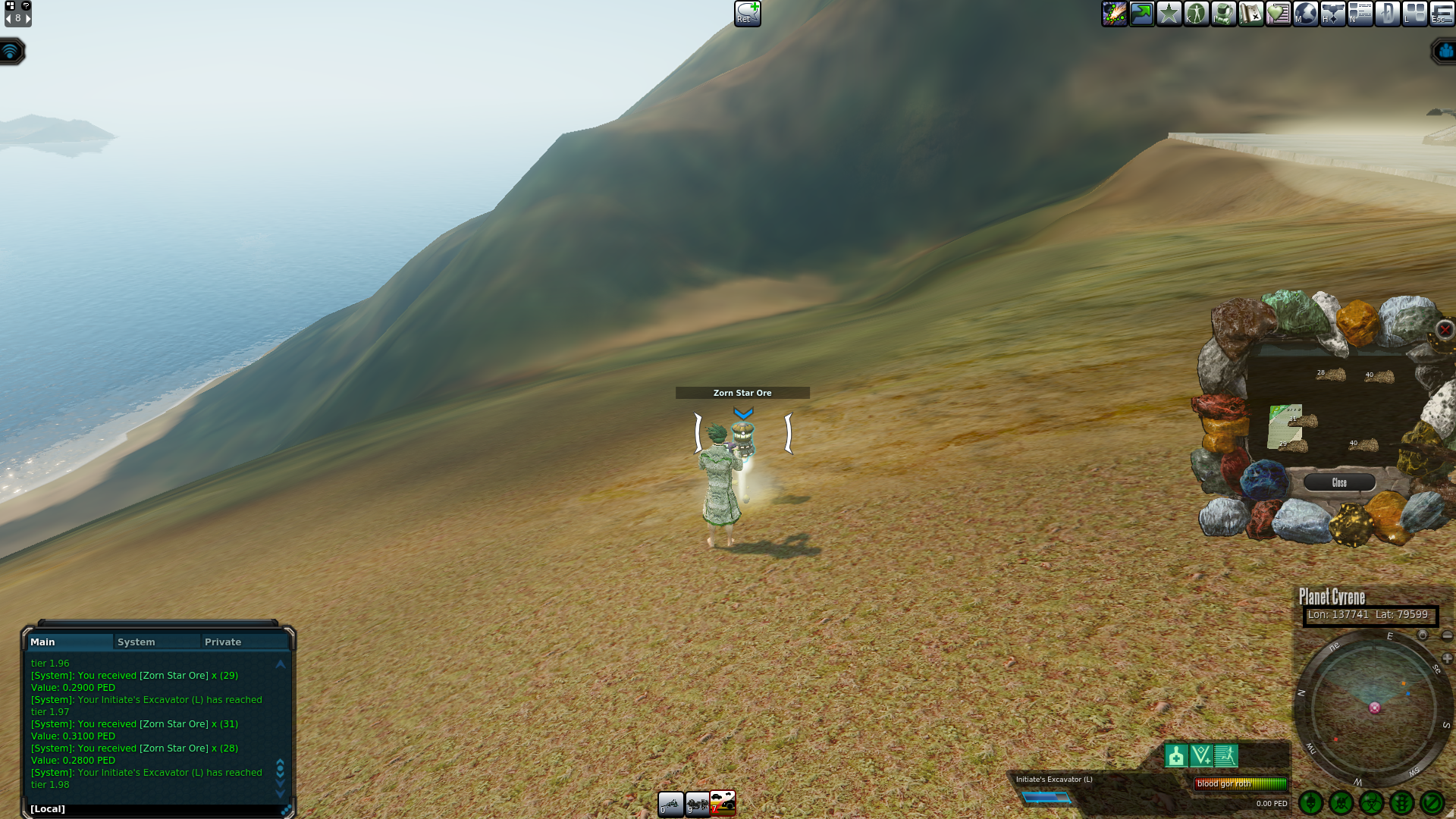 In the past, I’ve talked about why most people prefer to focus on just enmatter or ores. Without having a decent budget you can end up with a lot of different types that you just never get a big enough stack to sell promptly.

Many miners also prefer just hitting up a few select locations as well. They are often target mining for a certain ore or enmatter due to markup or their crafting needs. Not to mention it also makes it easier to have a fewer different types so you end up with a big enough stack to sell sooner. 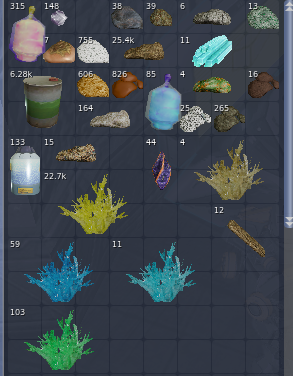 Since I’ve been mining everywhere on Cyrene and for both enmatter and ores. I can now highlight the insanity of doing so in actual terms of what I’ve been getting. In total, I’ve mined up 26 different ores and enmatters.

For a lot of ores and enmatters, you want at least 100 PED of the stuff to be able to sell on auction and even then most would prefer to have 500 or even great depending on the markup. The auction house minimum fees for listing go up the higher the percentage of markup is. So regardless if you are trying to sell 50 TT of ore or 500. It’s the same listing fee. 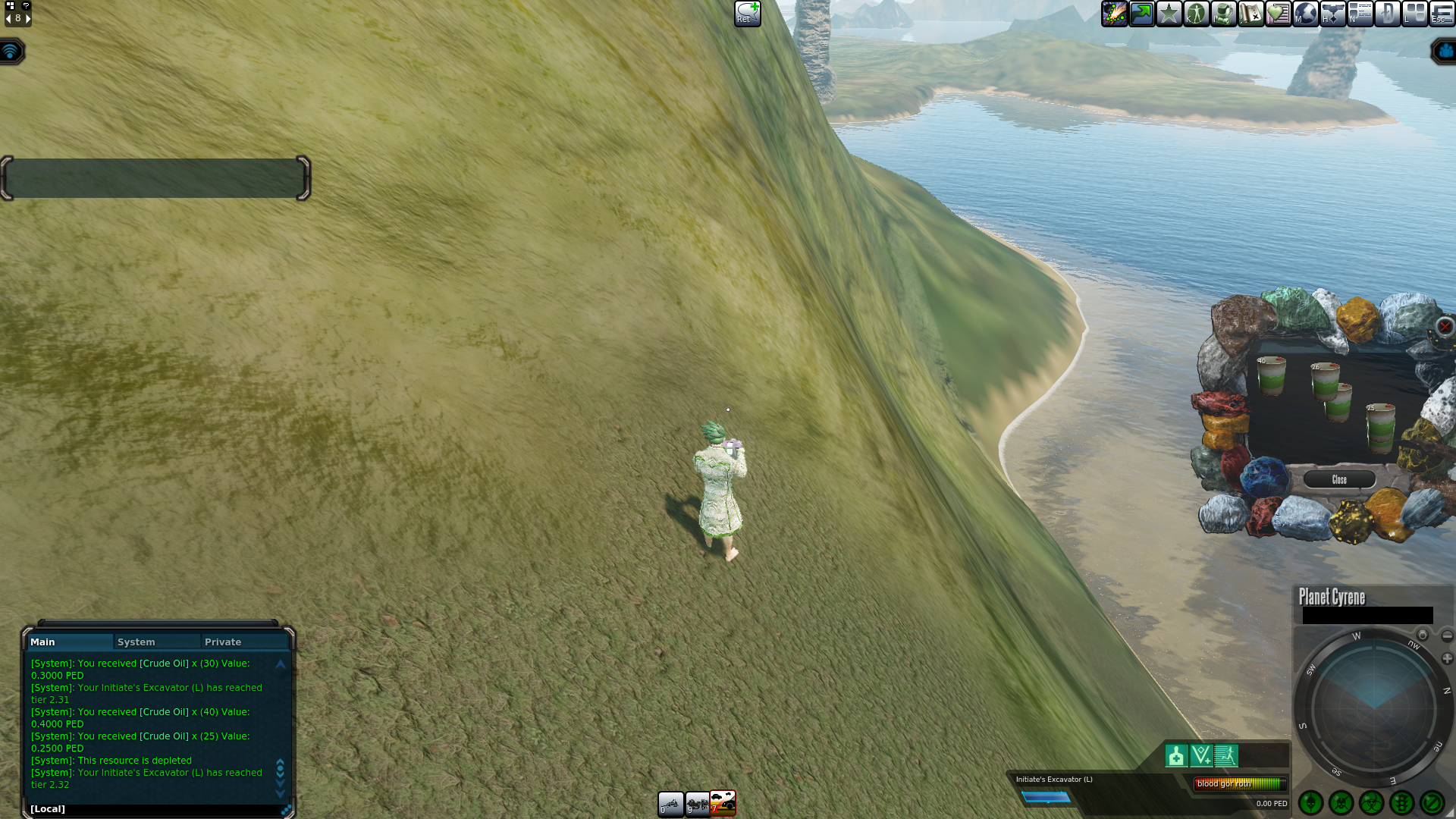 Almost everything I have mined up is far less than 100 TT. Most of it is well under 20 TT. Outside of me getting a global on something it’s going to take quite some time to get a big enough stack of something to sell.

While I am mostly mining for information value on Cyrene. I am also mining here so I have a little bit of everything so I can do crafting dailies and some other things while I’m here. As such for me, this is not necessarily a downsize having 26 ores and enmatter of which most are small stacks.

Not to mention I have already been using up the bulk of some of the stuff I have found. I’m also not done mining either. It will however take quite a large cycle of PED till I get a decent amount for most of these ores to be something I would be willing to list on the auction house if I don’t end up using them myself. While I did not make any profit this run I at least covered my probe cost, finder decay, and extractor decay. There was even a tiny bit left over after you consider markup that my refining costs should be covered. Granted I might not refine all of these types since Cyrene ore and enmatters sometimes have been used when not refined.

This also marks me finding the last remaining ores I was looking to. Now it just becomes finding multiple spots of what I’m after here mining-wise. After that working out which area tends to have a high percentage is going to take quite a lot more mining.