It was only a matter of time before my luck had run out. Up till this point, I was having quite an epic series of mining runs on Cyrene. My storage was getting full and I could not use all of it at this point. Still, I wanted to explore more.

As someone who has mined for quite a few years in Entropia Universe. I sometimes get that strange feeling I should get out of an area. Since I’m here to explore and see what kind of different ores and enmatters I can find. I ignored that feeling. I ended up returning to that cold place I was in the last run. I did move a bit away to a different section of it. The last time I did not get a fair exploration of the entire area since I hit such a dense pocket of finding on my last mining trip.

So I continued mining. The claims were few and far between which is never a good sign. On top of that, I was finding quite a few smaller claims as well. That should have been a red flag to get the heck out. Again though I wanted to see what else I could find here. Sometimes you just got to pay a price for such information. 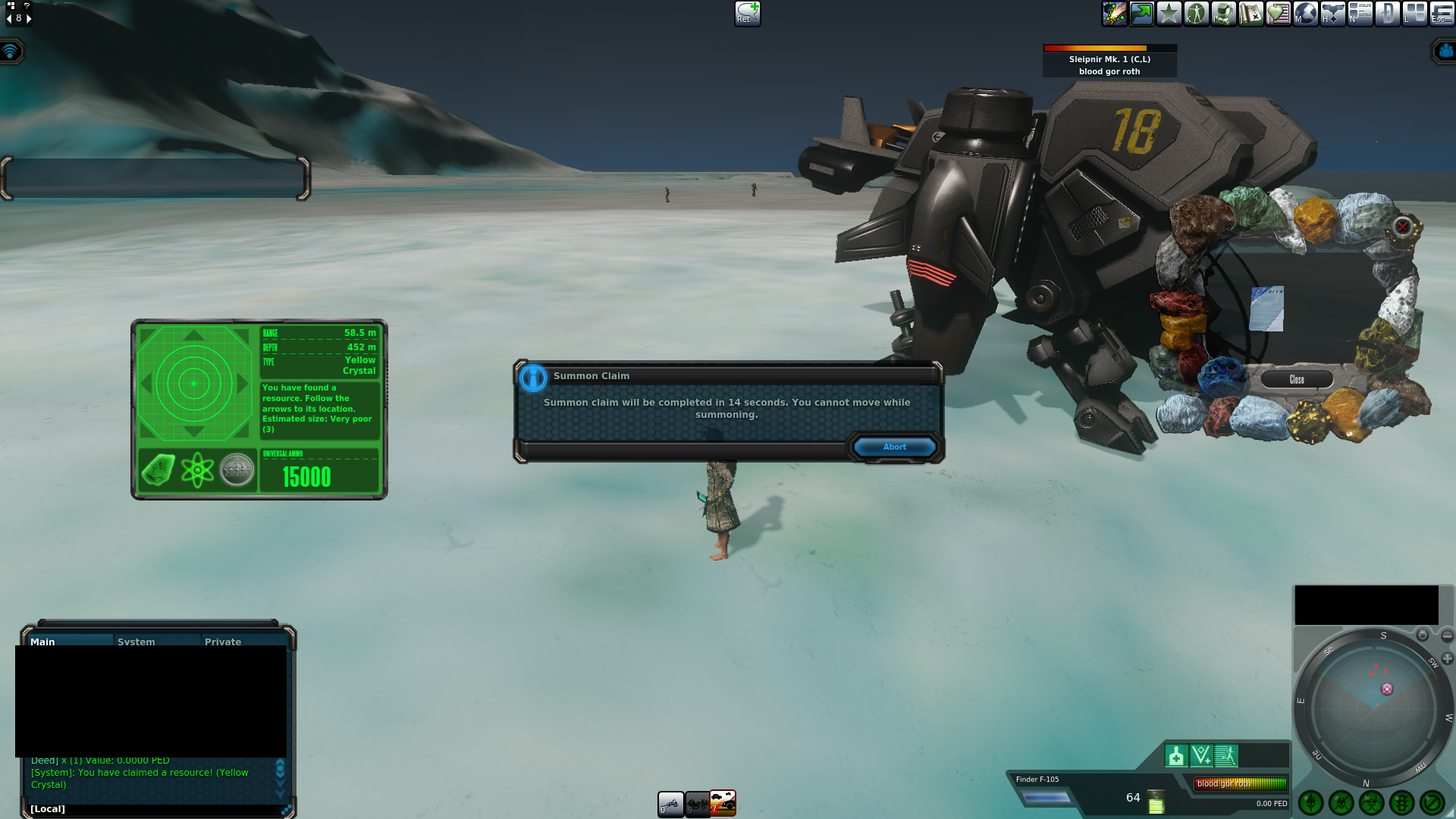 I ended up mining in a bit riskier areas to use if that changed anything. I would mind around packs of creatures that required me to summon out my claim to extract it. The only thing I did not do is drop probes in the middle of packs of creatures.

The creatures found in these parts were the higher level or I simply lacked the damage type of gear to deal with. I also discovered where some rather higher-end players have been farming a certain creature for as long as I have been on Cyrene. I believe they need the drops to make some plate or armor upgrades.

I ended up getting six or seven no find claims in a row. That is when I noticed a green dot flash ahead of me on my mini-radar before going off the radar. I jumped into my Sleipnir ship and flew towards where I saw them. As I suspected it was another player mining.

I deiced that was enough for me to move to another area. I was mining during the middle of the day instead of my usual late hours. So there were a lot more players online and it appears quite a few of them that are on Cyrene mine. As it did not seem many were hunting.

I flew back to the teleporter to get out of this area. That is when I noticed another person sitting at the revival station. They had an extractor out and must have been killing while afk. Then another player landed and they pulled out a mining finder.

I still don’t understand why so many players were all mining in this area. I did not find anything that amazing in terms of high markup materials. Perhaps I’ll try mining in this area again at some point or take a better look at what I did find to make sure I’m not undervaluing something.

Either way that was way too many players mining in one area for my comfort. I could not get out of that area fast enough. While I had dropped a few probes in there I at least stopped before it would become hard to recover from without getting a global. The next areas I ended up checking out had some breathtaking views. It was a lot more rocky and mining on the size of mountains than I have been doing. I even managed to find even more Cyrene-only resources that I have not seen yet that I also needed for crafting or daily mission turn-ins.

The mining was also a little better but not amazing. I kind of have been expecting to hit a really bad run. Just with how many mining globals I’ve gotten on Cyrene it makes me think mining here would be more volatile than I’m using elsewhere. It seems even the game was taking a little pity on me with how my run was going. I kept finding over and over again fruits and other things you can collect that randomly spawn on the ground. While they sure would not make up for it. I always collect them anyways while I’m mining. They slowly added up to a little something over time.

Towards almost the end of my run, I ended up finding a size 11 of crude oil. While not a global it at least helped to soften how bad this run was going. Who knows maybe there will be a shortage of oil in the marketplace here and I can scalp the oil prices for those externally desperate.

While a lot of planets out there you could drop a probe almost anywhere and find oil if you run out for your ship. Cyrene is a bit different and you would probably find one of their enmatters instead. While oil remains one of my bigger stacks for enmatter I find it a lot less than I would on another planet. I was half expecting this run to be a total dumber fire of losses with the way it started. Switching to a different location and getting that decent oil find at the end almost saved this run. After markup, I would end up breaking even on probes dropped but being out the decay on my finder and extractor.

Only getting a slight loss for finding out where another enmatter I want is located. Getting a very broad idea of where some other mining materials can be found was well worth it. I still however have quite a lot more mining to do on this planet before I focus on any area.