Over a short while, I’ve noticed Feffox have been globaling a lot from quite a few players hunting them in Entropia Universe. Wanting to understand more I did some research including going out into the field and doing a few hunts on them myself. These ended up being a bit more of a tactical hunt than many I do.

One of the first things I must conclude is I still lack a full understanding of why so many are hunting them. After doing some research online it looked like I thought I had an answer why. However, after going into the field and killing a few of them I can stay I had different results than I was expecting.

A lot of times when you see a lot of players hunting something it’s usually due to a decent markup item dropping at quite a decent frequency. This could be due to a massive increase in demand for an item or something else going on.

A lot of the stuff the Feffox drop quite commonly have very little markup to it whatsoever. This is not unexpected. That is just the nature of the game these days. What they allegedly drop and could be the reason for hunting them are certain types of paint cans for dyeing and mid-level tier components. Both of these things have some decent markup.

My experience however was not receiving any of these things. I more or less got the same loot even when I got some globals on them. That was shrapnel, animal shrapnel oil, and soft hide if that.

Usually when you are hunting something for markup says from components you would expect them to drop a few times in a given hunt. You would however also expect them to drop in small amounts. I have yet to encounter a creature that drops a large number of components used in tier-up of items in very infrequent intervals at a higher amount.

One possible item Uber players might be after is a rare drop that I used for upgrading select mind force items. It is also an item that has no listed markup so I’m not even sure if it’s a tradeable item or requires a quest.

Feffox is also not just something anyone can take on. The young ones alone have 1400 health and regen health. There is also a difference just between the young and old maturity that the old are double the health and regen. Making them quite a foolish endeavor to take on just randomly happen on them. 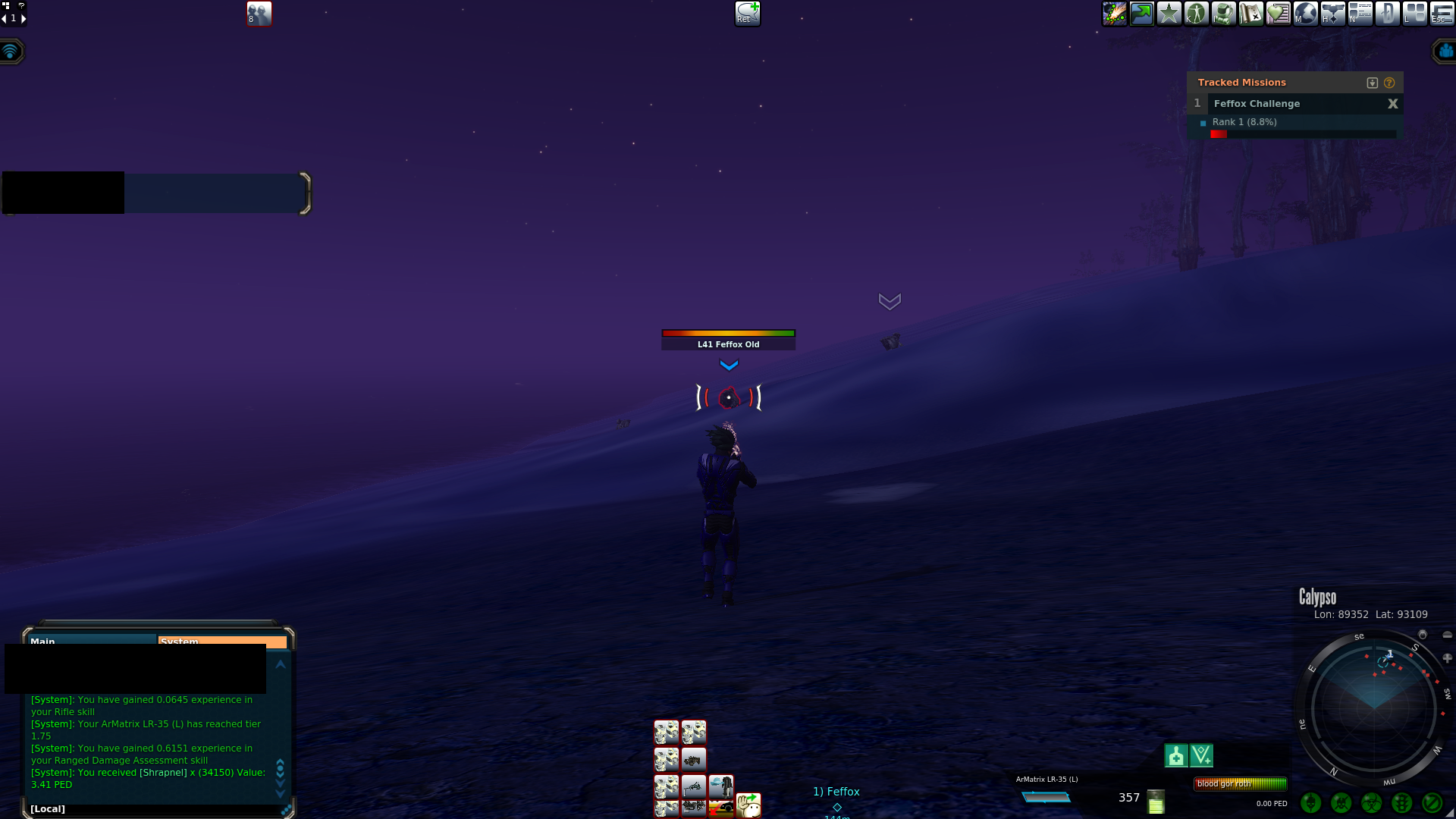 On my first hunt on them, I went in looking to hunt between young to old maturity. Anything bigger was going to do more damage than I could take on without massive healing. This would be an issue given the large amount of health regen the higher maturity had. I could find myself in a losing war of trying to heal myself and deal damage.

After killing a couple of them including a Feffox old I decided to try the rest of the hunt wearing my Gremlin with 5b plating was going to be the way to go. I still had a lot to learn about these creatures before I would feel comfortable trying them in adjusted pixie with 2a plating.

The place I ended up hunting them at had quite a massive and thick area of Feffox. This was further compounded to amazing by them having a low aggression range. I mostly made sure to keep them outside of the inner ring on my radar.

While I could get a bit closer to them than that after some testing. Since they wander around a bit on their own sometimes it’s just easier to keep an eye on the radar and use that inner circle as a guideline. I also took advantage of this.

When hunting the Feffox young if I hit them at max distance and walked backward they would be quite low on health by the time they made it to me. Even more so if I got off some critical damage hits. This was something I did not see any other players on my radar doing. Since they have such a low aggression range you can just fly into an area that you don’t see another player in. Land in a tiny clearing and work from there. This came in quite handy with how many players I often found myself running into.

I would also mentally plan my pull route as well. I would try and line myself up so once I was shooting at a Feffox and walking backward that I would be moving just in between other spawns of them. This allowed me to have a lot more distance to walk backward and to take quite a lot fewer hits.

While I was doing that I noticed quite a few players when we got close enough to each other was healing a lot during combat. During this first hunt, any time I took on an old maturity of the Feffox I for sure had to heal a lot. I was also getting them down to around half health by the time they were within attacking range which at least helped.

It was quite clear to me a few players and I’m sure myself included more than likely should not be out here hunting these things. I at least did not need to heal a lot as long as I was fighting young maturity. I can’t say that for other players as they were always healing between shots.

I also got that 169 PED global I used in the cover on my first hunt out. It was sadly however just shrapnel as the bulk of the drop. I have a feeling many are getting (L) armor when they get bigger global. I however never had any drop and will need to do a lot more hunting to see the kind of drop rate those truly have.

I have a saying that you should always be worried about creatures that give out a nice global on your first hunt with them. You might get the wrong impression that is normal and then get your butt kicked not understanding you need quite a lot of PED to cycle through to even things out. That is usually how these bigger creatures go.

I also got a couple of decent sizes smaller loots as well around 20 PED or so each. This makes me a bit fearful when these are having a bad loot day how badly they could go. I however was not going to stop at just this single hunt. I ended up 63% after all and I wanted to better understand things. One of the nice things about hunting something bigger than all the small things I have been for codex farming was the skill gains. The codex rewards even at the lowest ranks for Feffox are quite nice which is in part why I gave them a try anyway.

On my second hunt out I decided I would keep doing what I was doing for the most part. This time however I would only be wearing my adjusted pixie with 2a plates if I could. I would also be limiting myself to hunting young and mature maturity if I could help it. This was quite easy to do. During that run, I ended up down 25.73% which I felt was not that bad. The issue however was I still was not getting anything of much markup. Most importantly I was able to bring down my armor decay costs and the higher healing decay was low enough that this ended up being a cheaper costing run.

I however was not entirely happy still with my decay costs. While I do feel these runs would be better if I could use a bigger gun to help deal with the health regen. I was doing a lot more healing still than I wanted.

It is true I really should have much better evade for these higher-level creatures. However, if I want some quick skill gains I need to hunt something bigger for a lot of skill gains to help bring down my costs in the long run.

Still, though I was not done playing around with my costs for what I own. On my next run, I only hunted young when I had low-level gear on. Once I ran out of young if there were a few mature in the area to hunt I would switch over to wearing my Gremlin so I would almost not need to heal during combat.

The reason you don’t want to be switching in and out of armor a lot in Entropia Universe is that you are taking decay on them every time you equip it. While it is quite small once you multiple that decay of wearing a full set of gear and doing it a couple of times during a hunt. Those costs start to add up.

At the end of this third hunt. I had less decay for armor and healing than on my first hunt. I however had more decay than my second hunt. While the difference between the first and third hunts was large enough I could not rule out it being to small of a sample size to say for sure it was the better way to go. They were still quite close between the second and third hunt. 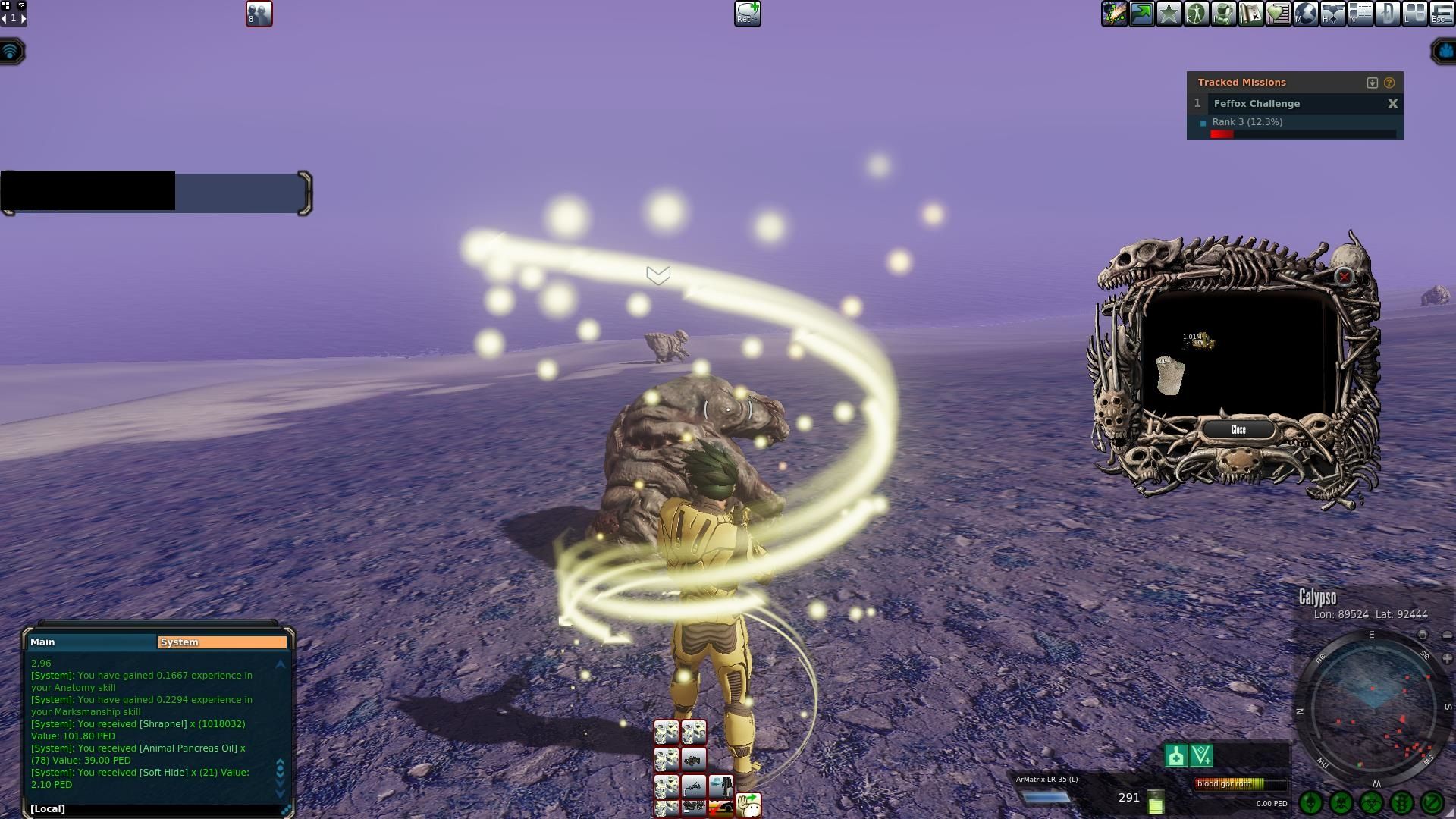 During the third hunt, I also got another decent global of 142 PED. I ended up being up by 49.24% on that run once I finished. It’s always nice to have a couple of profitable hunts. The issue however remains and that is the lack of markup on what dropped during the entire hunt. It is tempting to do a few more hunts to see if I have anything else to learn from these. It could just be as simple that many players require the essence upgrade drop that so many are out there trying to farm for it. That however seems a bit much since there are better options.

There are many reasons why people could be hunting Feffox. Some are listed in this post and others I’ll keep to myself. What will be interesting to see is if I keep noticing them global a lot or if it seems players have moved onto something else.

If I was going to hunt these in massive runs I would need to level up my gun skills further so I can use something with more damage on it. My ArMartrix LR-35 (L) with an (L) 33b amp was enough to get me by. I could however tell from my decay costs and the fact this creature regens with how many shots I took that I would want something bigger.

I would also want to work out some better gear. The next thing I would try is swapping out the plates in my gear and seeing if I could reduce my overall costs that way. However, I hate having to mess around with my plate setups on stuff.

It is tempting to go back and get another rank of the Codex for Feffox. That however I think could take 3 more trips to finish off. I have much better things I could be doing for cycling than much PED just for another rank of a codex.