I had been wanting to do a proper hunt on some Feffoid for a while now. While I usually hunt them a little bit from the daily mission in the Feffoid Cave. I ended up finding another daily Feffoid mission that led me to an interesting spot. While I was wandering around as I tend to do in Entropia Universe I found myself at Fort Fury. It did not take me long to notice there was a usually large amount of players for a fort out in the middle of nowhere.

Naturally wanting to find out why I ran around the fort a little bit. I ended up finding out there was a daily mission for tokens. I ended up skipping over the bulk of the text because why read a mission when it sounded like they just wanted me to hunt Feffoid for 50 Blakksaah Badges.

From the mission, I did gather you needed to hunt Feffoid around a certain location. I did not know till I got there it was a bit more exact than that. I just thought I would be getting to hunt something I wanted and get 4 daily token rewards out of the deal. I flew out to the location and noticed there were quite a few players gathered killing an event. Since the loot is shared I thought I might as well join in and try to get enough points for contributing to the event.

Some quite high-level Feffoid were being spawned in that I’m not sure someone could even solo themselves. There were enough people there that it did not take that long to kill them. After a kill, I noticed I was getting a small amount of Blakksaah Badges which was needed for the mission.

Once the event was over. I noticed people were just clearing the small little area of Feffoid and I had assumed that everyone was just stuck here having to grind out a small area for this mission. That many reward tokens after all there has to be a catch.

Not long after that, the event started again. Since I joined the event late last time with it almost being finished I thought why not do it again. This time I managed to get to tier two before the event was over. I also collected a little more of the Blakksaah Badges.

Since we were fighting quite high-level creatures it was no shock to me when it turned to hit me it put a nasty DoT on me. Despite my best efforts, I could not heal enough to keep myself alive. I ended up dying and having to fly back.

By then the event was over. I did not end up doing as well as I was hoping. As far as I can gather you maybe get some short-term buffs depending on rank I’m not quite sure. I have no idea perhaps it’s nothing at all. It would not be the first time I did a random wave event like this for nothing extra for getting a higher tier. 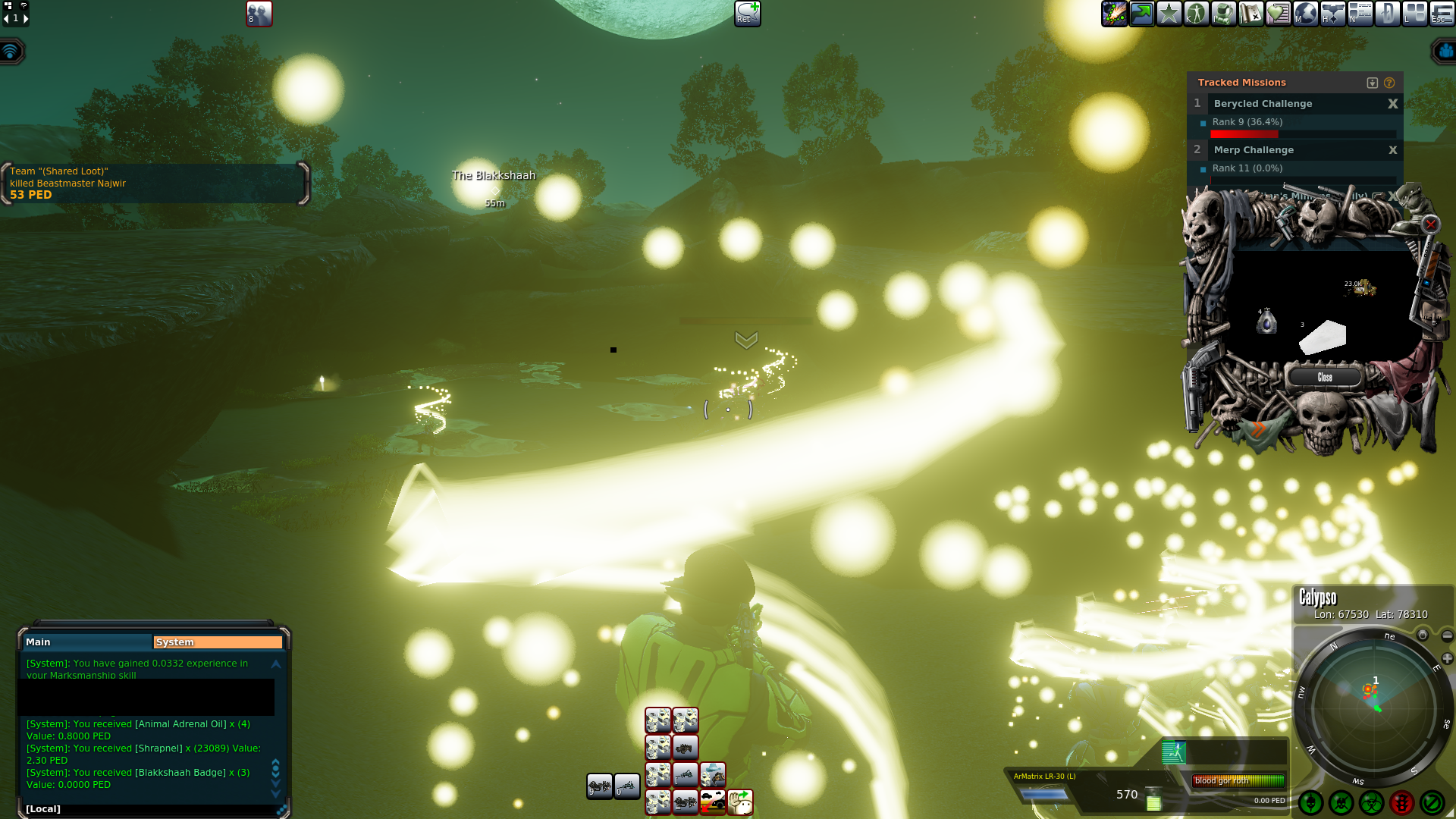 I then stayed for the third time. This time there was a shared loot global of 53 PED. Of Which I got a puny amount of 3.1 PED. It did not take long to realize I was putting more ammo into it than I was getting out by a long shot.

I did some quick math and it looked like I was already down 60% if not more I had to guess somewhat for the decay. A lot of the players there were long-term and higher-level players. They had bigger guns than I did and some of them I would assume we were in a group hunting with some friends.

The issue with an event like this is if anything amazing drops it’s going to go towards the highest damage dealt first. At least that is what I recall from joining in a few shared loot events in the past. Since I was more than likely the lowest damaging dealer I was getting wrecked.

It could be with Shrapnel in the game now that the loot would be more easily divided out based on damage. Either way what I had lost already for only a fraction of the Blakksaah Badges I got made me abanded the idea of wanting to keep clearing them.

I thought I would get on with my hunt on regular Feffoid elsewhere. They do not drop the badges all on their own and after double-checking, it seems if I want to finish this daily mission I’d need to go back to the wave event. This I don’t think that a great idea unless I had a bigger gun possibly and was in a group of friends. It’s hard to tell for all I know all those players took massive losses as well. I flew a little bit away from the group not wanting to be near them. Naturally, I found a swamp with Feffoid to hunt in it. It seems it would be fate that yet again I’m hunting in a darn swamp. I landed down and started shooting.

I was already down a fair amount for what I was planning to use for ammo. Unless something major happened I knew this was going to be a total wash. Feffoid does have some interesting possible drops so anything is possible.

One thing I’m rather happy about is my gear seems to be more than enough with my evade level. While I did need to heal a little bit it was not a lot. Feffoid from my understanding deal about two-thirds of their damage as cold and while my gear has some protection I did not think it was that great. This area also seemed to be decent enough that I could see me spending a fair amount of time here again. There is about a 50% health difference between the lowest maturity I was hunting and the highest that I at least could find in this small area.

They also do have some health regen on them. My better gun ended up breaking during this hunt and my smaller backup was able to kill them. They did get a few regens ticks off before I was able to finish them with a slightly lower damage gun.

I would almost want to hunt these with a slightly bigger gun which I’m nearing being able to use. That would cut down on the regen I would just need to be careful about not overkilling. This can be a little harder to balance when you are dealing with something that regens health over time.

I ended up taking quite the loss from all of this. All of it can be contributed to the event I ended up joining in trying to get some badges for daily tokens. It could have been much worse as well except I had looted a couple of times an item that has some nice markup on it.

While I did not get a lot of Tier 5 Components they have around a 450% markup for the month a bit less for the daily. While I did only loot 2.4 PED if they end up selling for around that much that is 10 PED. While not a lot at least some other things I looted help reduce the losses a little bit.

While not all the matures in the area of the swamp appear to have a chance to drop tier 5 components. It seems with this kind of markup depending on how often it drops might be worth investigating further. It’s hard to say if I got lucky with the amount I did or if that is a normal amount for how many I killed. This ended up being an interesting little adventure I had. Next time I’ll just be skipping trying to do the daily and focus more on some solo hunting. I might dig through some public data loot tables and locations to see if I can find perhaps a better spot for myself to try hunting more Feffoid.