It was time I got a decently long EnMatter mining trip underway. I ended up mining in one of the coldest places I have in quite some time. I also found some rather odd EnMatter that I have never seen before or not much of in the past. The area itself was almost more challenging than the last spot I was at. 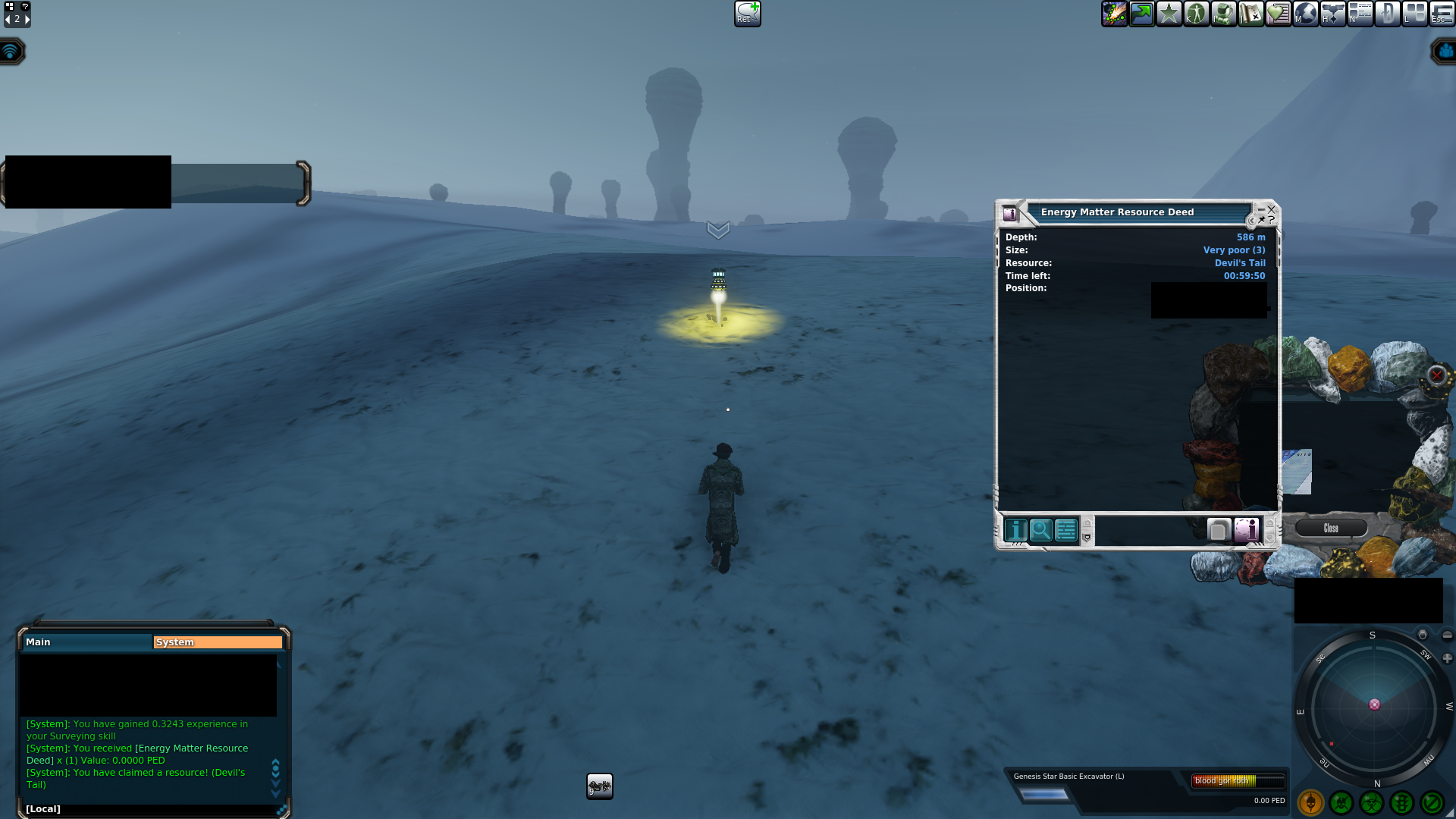 There is just nothing like mining in tundra with frozen land as far as the eye can see. It sends chills and a coldness down my spine. Almost like I was there out in a cold area dropping probes hoping to find some crazy EnMatter find.

The area I ended up mining in was player-owned land. While I usually try and steer clear of such areas the mining tax rate was set at 0%. It was also quite massive. So big it had several different revival areas which you don’t usually see in most player-owned lands.

One of them you could even repair and store things at. This can be great as a long mining trip can cause you to be encumbered by weight. Although I was carrying multiple ships I can drop some EnMatter in the inventory if needed to combat walking slowly if that ended up being the case.

The lands here were a bit more challenging than in my last spot. While most of it is open and the hills are not so bad. It is what lurks within those lands that can be a bit of an issue. 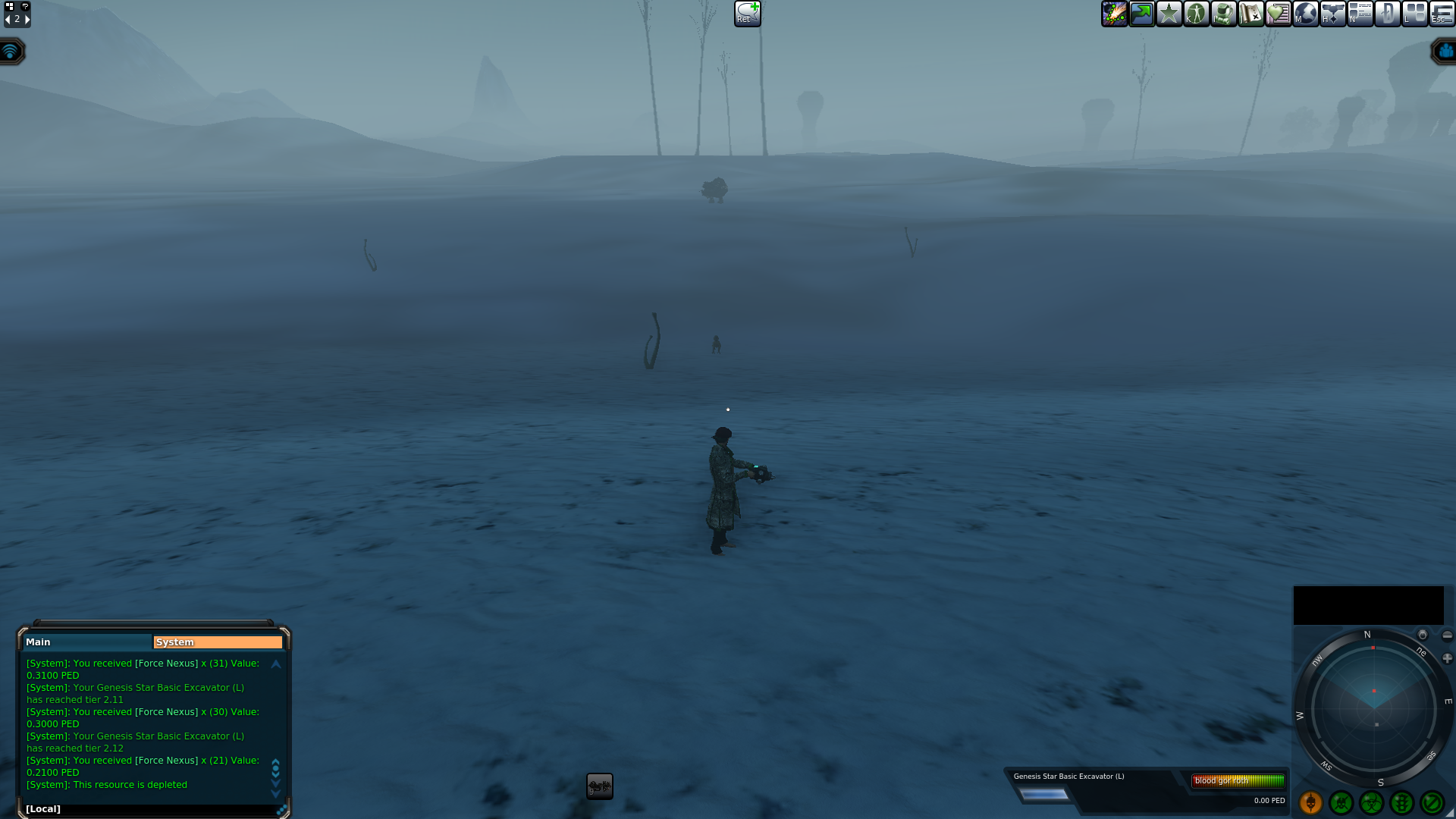 The Atrox all on their own would normally not be an issue. The Adjusted Pixie with 2A plates I’m wearing can more than deal with them. While I did kill several just to get them out of my way. They did take some time and it would have been quicker to just move them out of my way as I never got back my ammo costs.

Atrox has quite a large aggression range. That means when you are dealing with them you have to keep a few things in mind. Where you want to mine now, where you are going to mine in the future, and where you have already been.

Ideally, you drag them far enough away at least for the time from the area you are heading into to mine. If you can however it is even better to drag them off to where you already have mined and won’t be going back to. That way you are not dealing with the same one over and over again.

Since I can also tank the damage they do while I’m wearing armor I also have the option to mine out anything I find and then fly ahead enough in my ship that I’ll be out of range in the next probe drop. That works great for an area like this where just a couple of cycles of my resource extractor would deplete a find most of the time.

The bigger issue is the creature you can see far off in the distance. They are called Chompers and they were constantly hitting me for over 80 damage with my gear on. They deal a decent chunk of their damage as cold which I don’t have much of a solution for.

Under ideal conditions, someone mining is not decaying armor. However, sometimes it can be worth the couple extra seconds or longer wearing armor can give you. I would sometimes switch between wearing armor and not depending on what I needed to do.

At least the Chompers have a low aggression range and I was sometimes found dropping probes between two of them. Holding my breath that I would not anger one and get killed before I could get anything I found. Quite a lot of times to avoid having any issues I would just summon the mining claim to my location. No sense in going through a few extra motions when I could just wait 30 seconds and not be lazy.

This kind of mining also highlights how important of having more than one vehicle to use. It was not uncommon that I would spawn my ship and get killed before I was able to enter it. While you can recall any vehicle you have spawned it gets sent to plant storage and not the player inventory.

Thankfully if I did not feel it was worth my time trying to recover a vehicle and put another one at risk of getting stuck next to a Chomper I had storage nearby. If you are mining in the middle of nowhere however that is not always the case.

That is why it’s always important to have options. You don’t want to end up getting stuck somewhere. You do not want to go spend an hour or more having to run back to a teleport that could be far away. Even more so if you are already bogged down by mining resources that are slowing how fast you run. Unlike my last EnMatter run, I did find some slightly larger finds. This ended up being my biggest one a size 7 find. After that, there were a couple of 4’s and then the usual 3 or 2 size finds.

It was quite a welcome sight to at least find something bigger as early on I had a lot of no-find probe drops. Which slowly caused me to get more and more behind TT found vs what I was dropping in probes. While a lot of what found did not have much markup. There were some interesting findings. I lucked out findings a single tiny claim of Henren Stems. While it was only 1.26 TT worth it has a markup of 180-220%. I however would want a bit more before trying to sell any. Who knows if I’ll ever find any again let alone be mining somewhere it could be found.

I also found a small amount of Fire Root that refines into pellets that sell for 128% markup. It again was not much and I’ll more than likely need to get more before it’s worth trying to sell. At least people are using it and it’s a shame I was not able to a decent find of it.

Then some things had a high markup over a year or longer ago that no one is buying. It’s not uncommon for some of these more strange finds to have either no use for it that is known or not a huge supply of blueprints to craft with.

There are also items crafters no longer buy the resources for to make since they are not worth trying to sell anymore. Some people will buy up at a low cost if they can resources that are hoping one day will get a better use case for.

Entropia Universe can also be a bit of a strange game. It’s quite possible years ago for some of the EnMatters I have that no one is even buying had blueprints for crafters added to loot tables. It’s just that no one discovered those blueprints yet.

There are still items today that players have been trying to work out how to get for years now. Some things could drop more than once but as far as anyone knows there Is only a single player with it.

There are also rare occasions such as the possibility to get something to drop no longer around. Back in the day, some creatures on land-owned areas were removed to put in something the owner thought would be better. No one is known to have the DNA to replace those creatures and they are considered lost forever.

I do have a little bit of research to do on some of the stuff I found. I want to make sure since I don’t always mine a few of the Enmatter I found that it would not be better off to refine or if there is a use for it in its current form. Along with what crafters even use some of this stuff for so I better understand the price and the item markets that follow. Despite all the probes I dropped in the area I was in there was still a decent chunk I left behind. My find rate was just not getting any better and I felt it was time to call it. It was also quite late into the night.

As you can see above for the areas I did mine in I had decent coverage. There were a couple of spots where the Chomp spawn was thicker than I would have liked. So I decided to mine around them the best I could since trying to move them was not going to end well for me.

I also did mess up a couple of times. I’m still trying to get used to mining again. My lines were not exactly perfect as if that is a real thing anyways. As you usually have a large tree or rock in your way anyways. It was a bit better than my other mining attempts. That however did mean a few areas I would have been overlapping way too much to want to drop a probe in.

At some point, I do need to make some mining equipment upgrades if I end up mining more. The (L) extractor I had on me is about to break and I want a more eco one. I could also use a much better refiner to cut down on those costs when I start refining stuff to sell in the auction house. For now, everything I mined I’m going to keep till I get enough to sell in the auction house. I was down a little on the run which is something to expect. There should be more than enough markup on some of what I found to turn this run into a break-even or a slight loss.