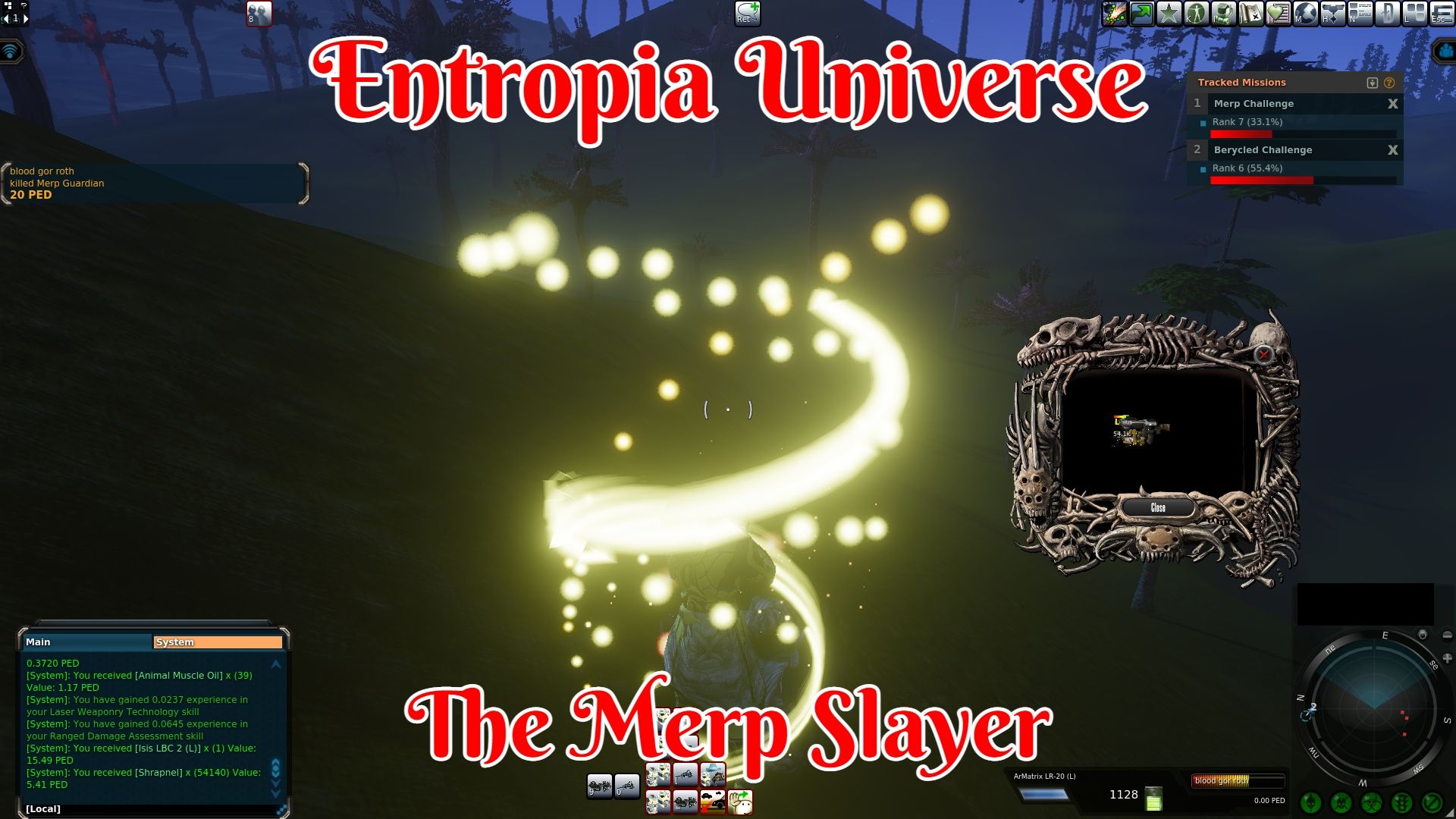 I have indeed been a bit obsessed with hunting Merps lately and that is not stopping. Unless they want to drop what I want so I can move on to other things. Till then their species has been put on notice.

I did not even have plans to hunt Merp for the day. I thought I should join in on the Robot Spring Offensive event that had been going on for some weeks now. They never announced on the official post when the event itself was going to end.

Most players from what I can tell tend to ignore the Robot Spring Offensive. Outside of some special robots that spawn only during the event. Most tend to stay away from it as they don’t like the loot table. Then you have people who want to grind ranks up for the Codex that can only be worked on during the event.

I went out to one of the locations that should have been covered in robots. Since it was in a lower level area I assumed they would put the spawn off the teleport a bit to not have a huge impact on the newer players.

I flew around and around the area for quite a while. I also could have sworn when I had been there a week earlier and there was a robot beacon as well. I could not find that either. 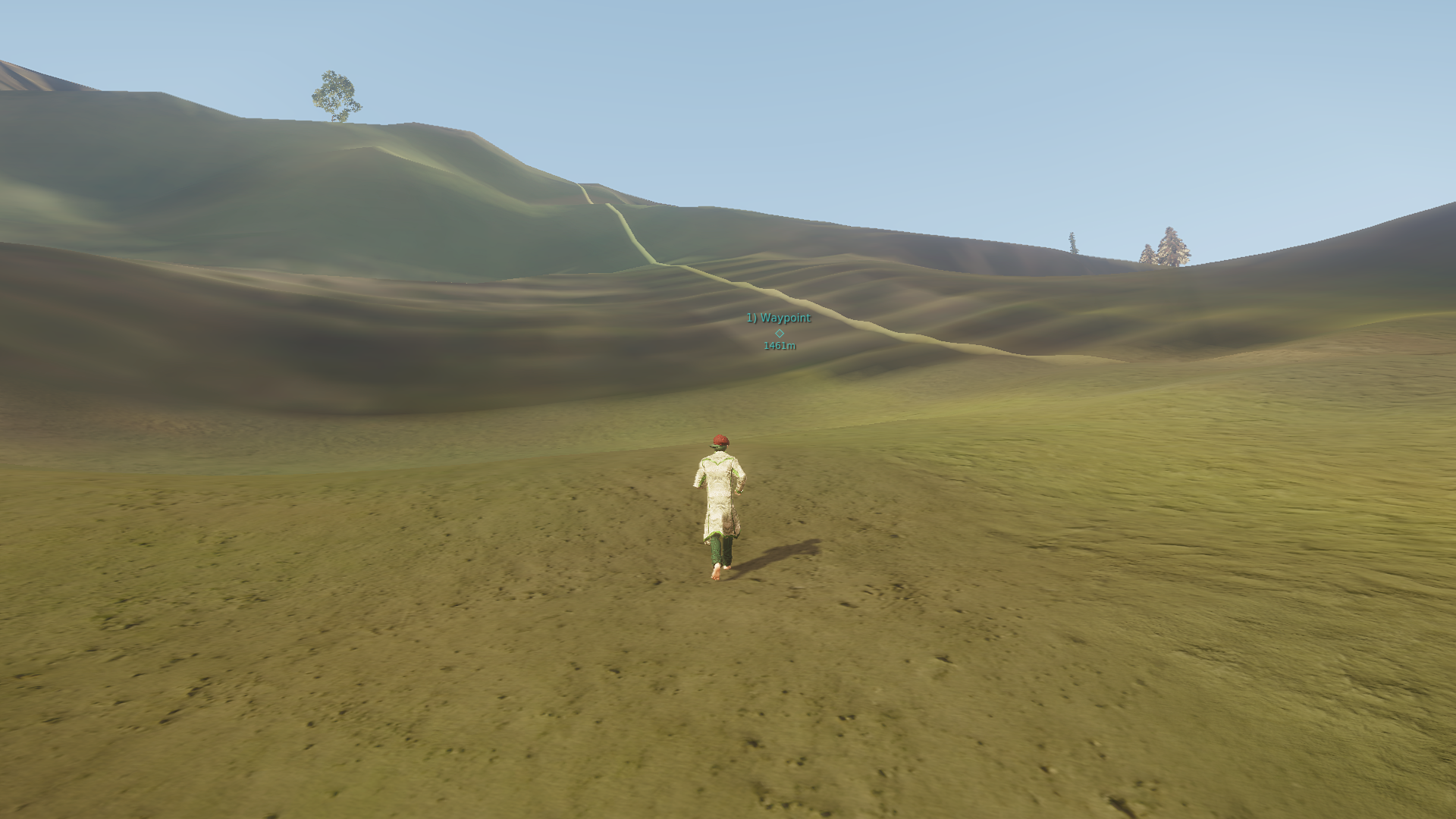 I then ran off to another location that I knew had these robots for sure. As they were placed over the spawn of creatures I wanted to hunt instead. They were nowhere to be seen either. I guess the event is over and no one seems to have said anything about it. Since the robots should now be out of locations I wanted to go hunting in I went back to scouting some areas. I also decided I would try and walk if I could and do some fruit running as well. I was not in any rush.

The first two locations I went to had the same issue as the last place I hunted at or worse. That being the Merp was quite mixed in with a bunch of other stuff. There were even fewer of them than in my last spot. The spot was even worse since they were of lower maturity and I wanted to hunt higher levels.

Thankfully the third location ended up being where I stopped to hunt them and some other things. It had a much wider area and therefore more Merp. The creatures were however spread out even further but I ended up using that to my advantage as it made targeting just Merp easy.

Since sometimes it was a bit of a run to the next possible kill I decided if any Berycled got in my way I might as well take them out. They were even a bit harder to kill than the Merp and higher levels than the last spot I was hunting some.

I ended up leveling up my Codex for Merp and Berycled challenge a couple of times. The skill rewards were still not that great. It was however something. I always went with anything that would affect my evasion profession if given the option. 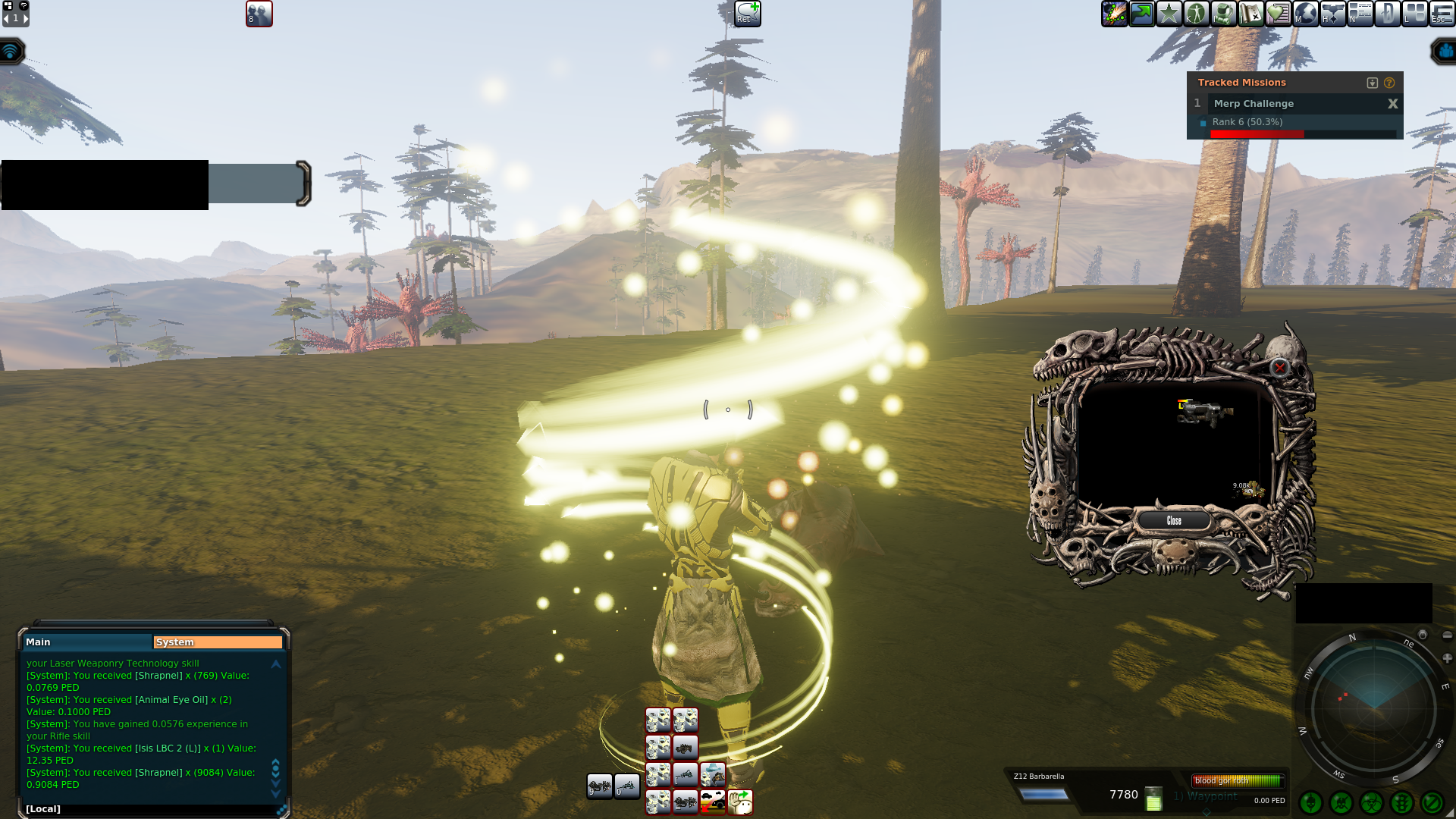 Since Merp is quite a low-level creature and they global on a lower amount of loot it did not take long before I got one off a Provider. While it did drop an item it was just an (L) gun with a fair amount of its TT missing. I would later put it on auction just to test if something like that would sell.

There are a couple of guns listed in a loot table that says these things are uncommon loot. I guess this would explain why I’ve been seeing a few other players get global off Merp and no new pieces of armor being listed. They more than likely just got an (L) gun.

While I liked having a bigger area to hunt in it was mostly lacking landmarks except for one side. As I would explore it would place location markers on the map. This made it easier to work out the area this Merp spawn was and to remember where I could find them.

This place did have a lot more steep hills which makes it a bit harder to know what the red dot you are chasing after on the radar is. Since Merp has the biggest aggression range of any of the creatures out here. I knew if I got within a certain distance and it did not start moving towards me it was not a Merp.

That however was not the biggest issue for the area. Right next to it is a lootable PvP area. Yep, lootable PvP. I had suspected based on some of the possible locations for Merp that some of them might be in such an area. At least this spot was on the edge.

This also meant I had to be careful. Since I would be hunting for hours and have a bunch of stuff that could be looted. I was from time to time opening up my map and making sure I was not about to enter that area. Granted the radar will start to light up right before you enter such an area. I still wanted to be careful.

This was the second global I got for the day. It was another (L) gun but at least it was also full TT. It was however a much lower level and only 9 PED. I think I ended up trying this on the market for 122% markup or so. While it still has not sold this will be me an idea if they are even worth trying to sell.

You might also notice I’m using a lower-level gun. While I was finding up to Old Alpha Merps in this area that has 330 health. I felt my bigger gun would be a bit overkill and I did not want to sit here with the weapon I usually use as my finisher.

For the most part, the ArMatrix LR-20 (L) was perfect although I feel I could go one gun size down. I would get a couple of hits on the creatures and then switch to a less powerful gun to finish the job. This helped a lot on rare occasions I got adds on me which was not that common.

ArMatrix guns are player crafted and are having a bit of a supply issue. The one I would use for a bigger creature went from 118% markup to 148% or higher on the auction house.

Thankfully I know some player-owned shops that still had some guns left. It looked like I was not the only one going out and picking up a couple of them just in case this short supply issue turns into a much bigger one.

I do have a range of weapons skills so I could always switch to something else for a while I’d just need to do smaller creature hunts. I do however want to level up my laser rifle skills as I am getting close to using the next gun up. 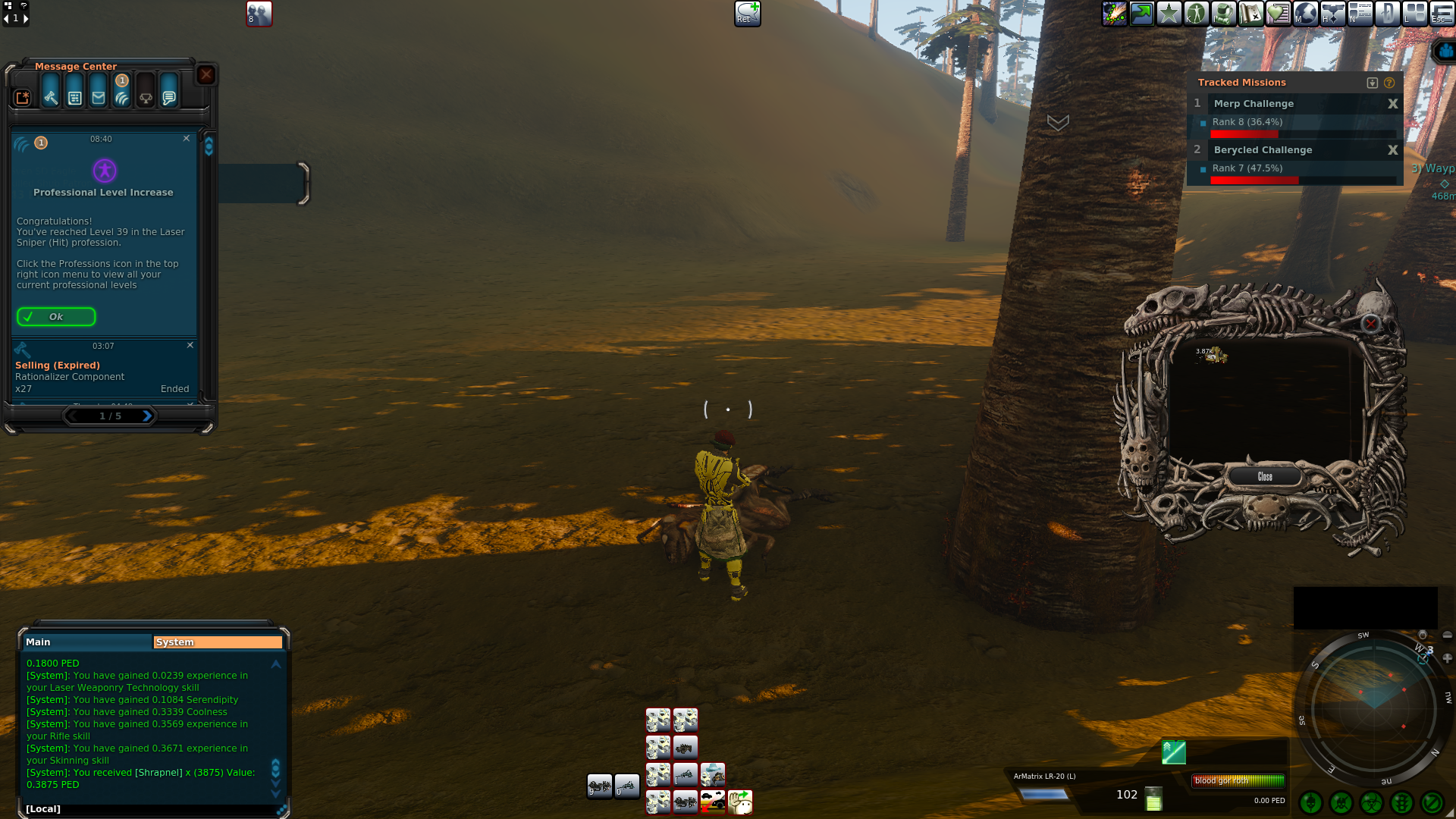 I even hit Level 39 for Laster Sniper (hit) during this hunt. I just need one more level in a hit and a part of a level in damage and I’ll have what I want skill-wise. The next gun up while tends to have a slightly higher markup right now is a lot cheaper than most of the other guns on the market due to lack of supply.

I did get one final global for the day which I ended up using for the cover of this post. It was no shock another (L) gun. All of these global were off-killing Merp. All the Berycled that I had cleared were stingy on me. While this was not hunting something big getting three globals in a hunt is always nice. After markup, I should come out a bit ahead assuming at least 2 of the 3 guns end up selling. If they don’t I’ll have to vendor them as I don’t have a use for them otherwise.

While it would have been nice to get the piece of gear I wanted to drop. I was not expecting it to since it is quite a rare drop. The item itself is going to be pricy if I have to get it off auction. There tends to be a 12-person or larger bidding war for it.