Many times a hunt is just not that exciting. Nothing happens loot-wise. You know the area well enough there is nothing new to discover. You just go through the normal acts of hunting in that area. Before I would head over to my newer Merp spot that I found last time and grind there for a few hours. I thought I would run my daily Feffoid Cave mission. I know there are a bunch of other daily missions you can I have not looked too much into it them.

I’m still on the fence if it’s worth trying to grind for enough tokens to get something out of the special shop. I did discover I was a bit wrong. There is a lot more in there than just low-level guns. There was some stuff in there that even I lack the proper skills for from the looks of it.

They are all (L) weapons however and once they break that is it. They also have very low value but apparently can shoot quite a few shots before breaking. I think the one I was eyeing will take 80 tokens. Which would take 80 days if I’m just doing the daily Ferroid Cave mission. After that, it was off to my spot. The spot itself I have yet to run into another player yet at despite being there a couple of times now. Unless I’m mistaken there is not a close teleport either. So there is a little bit of flying there and back when I need to resupply.

While I was mostly there to hunt more Merp I did kill a fair amount of Berycled as well. There is decent maturity of both at this location. I’m also uncertain if I only keep killing Merp if I’ll end up with none left spawning if their place hold can have more than one creature at it. As I usually perfect to hunt large packs f the same creature and not deal with the mess this place is.

I have noticed that some areas are now covered in other creatures I try and avoid if at all possible. I consider the Sabakuma in the area to be ammo wasters. They deal 100% stab damage which I have some protection from but not enough so their hits hurt. While they don’t have as much health as the Merp is not low enough to only kill them with my finishing gun so I end up overkilling them by a decent amount.

I had a couple of moments where I would walk into an area and end up having a couple of Merp come after me at once. While that was unwanted extra armor decay I never once needed to stop and heal this entire hunt. I’m almost thinking of pulling my armor 2A plates out of my gear and seeing if it’s cheaper decay-wise to be a little less tanky and do a little more healing.

Something I might mess around with the next time I’m in the area. I’m just a bit lazy and don’t want to have to remove each armor plating for each of the 7 pieces of gear individually. Then have to add them back in later. I prefer to have each armor set up with its plates So I can just grab an armor set and go. When it comes to Merp and the gun I’m using I got to say the amount of skill ticks I have been getting has been amazing. While the amounts are not huge just killing three Merp in a row filled my main chat with system alerts of a skill gain. Around halfway through the run my biggest find was 14 PED of Shrapnel off a Berycled. I almost did not notice it but I looked at my loot window as the number in there seemed a bit odd. I also had a couple of spawns on me moments later.

It was up till this point that most loot was rather boring and very little of it. There are many within the Entropia Universe community who if a run is not going well will take a break and come back later hoping the loot will be “better.”

Unless I have a legit reason to give up on hunting or mining run I just keep at it. I need a lot more than just a bad feeling or looking at what I’ve looted vs the ammo I have remaining and thinking maybe I’ll try later. 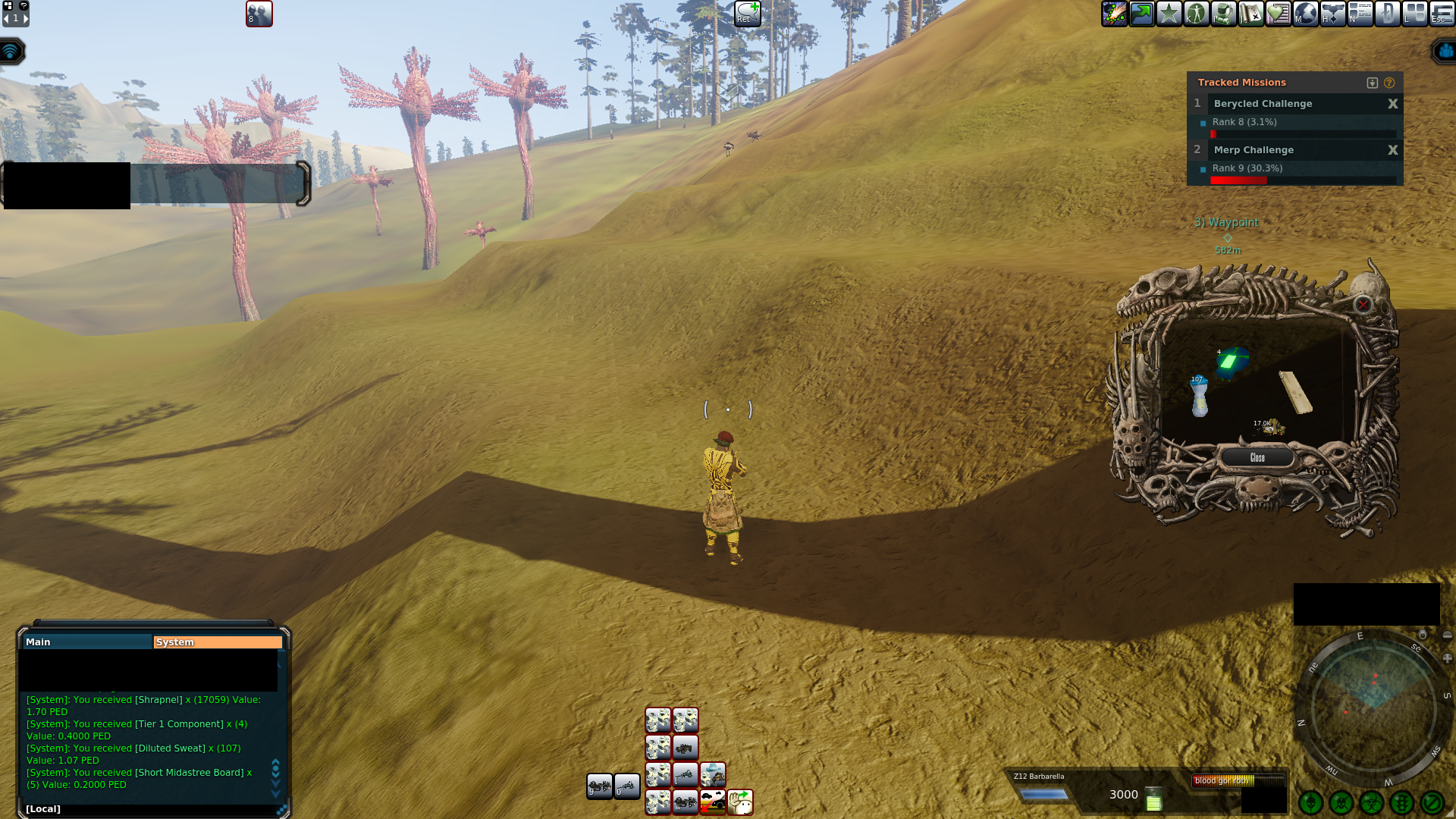 Around two-thirds of the hunt now being finished the feeling had set in that this run was going to be quite bad loot-wise. It happens quite a lot. Outside of a couple of items would love to see off the Merp. There is not a lot of high markup stuff to get.

The Bercyled of all things has been dropping some board or tier 1 component. Not in large amounts and not that great of markup either. It was still something at the very least. I even decided at one point to clear the growing hill of Sabakuma. While some of them did give slightly better loot than I was expecting. The loot was not hiding with them either.

As the ammo and time slowly ticked by I kept going more and more into the red for this hunt. I had been doing quite decent on my Merp hunts up till this point. While not massive amounts of loots the losses were quite small in a couple of percentage range after things sold on Auction if that. 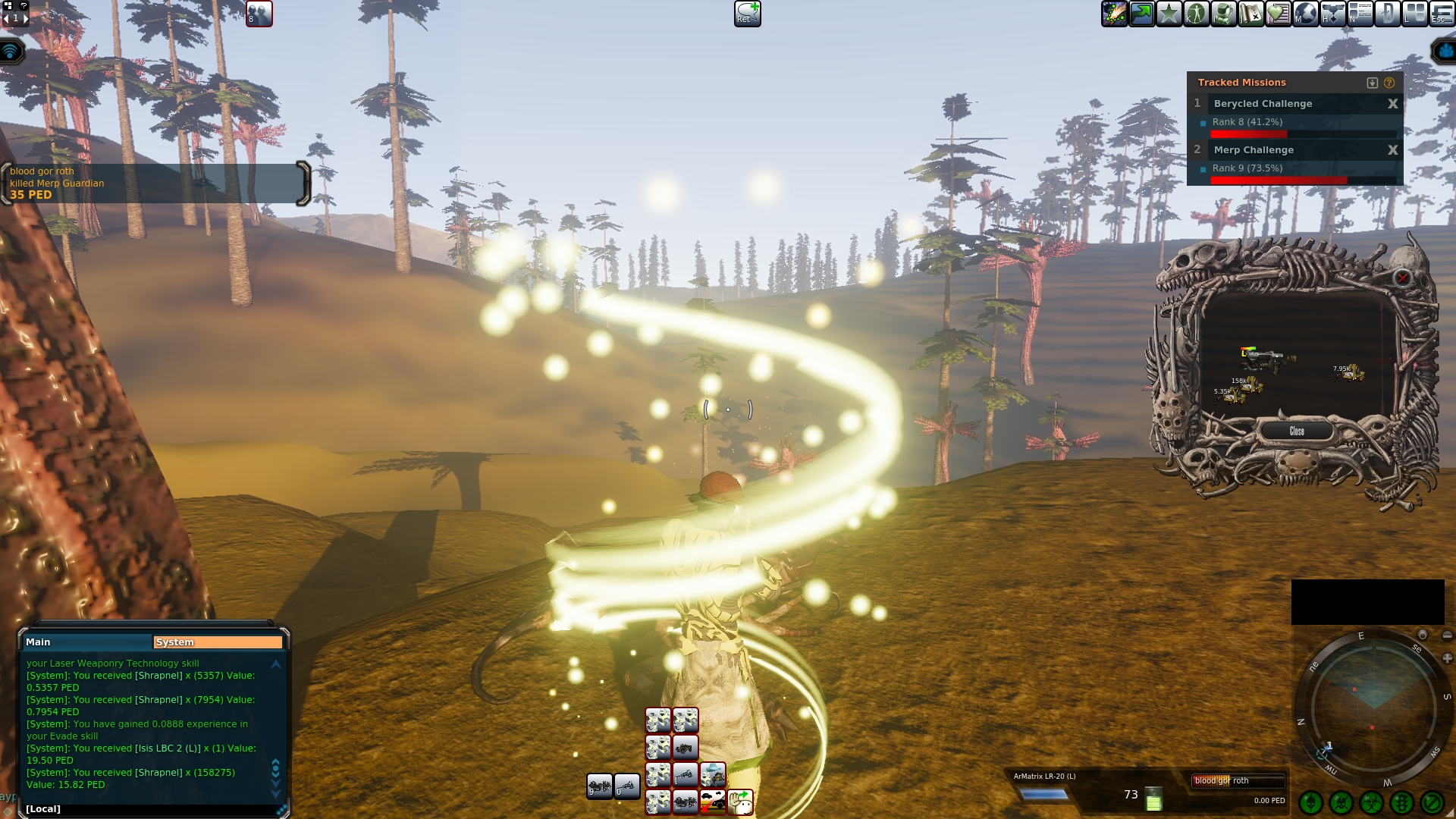 I finally got a full TT (trade terminal) drop of an Isis LBC 2 (L) of 19.5 PED with another 15.82 worth of shrapnel. While not what I was looking for I’m more than willing to take almost anything at this point. I ended up listing the gun for around 118% markup or so since it was full TT.

While I have had some other guns sell even for having a lot less of the percentage of the gun remaining. I don’t have much of an idea other than seeing about three or so full guns of this tend to sell a week. This I think is a result of a lack of supply. Due to that lower levels might also not be looking at a gun like that to use as they often recommend something else.

At least I gained a bit more on my Bercyled and Merp challenge codex. I have no idea how many ranks there even are. I however suspect I have quite the ways to go before I would ever finish either one of this Codex off. The old Iron challenges were just an insane amount of kills required to finish them and this system replaced that.

That single find almost saved the entire hunt. Once I was done with the final amount of ammo I brought I headed back and worked out how it went. If the gun I looted and a couple of other things I found sell it should only be a 2.1% loss. This is a lot better than I was expecting this run to go. 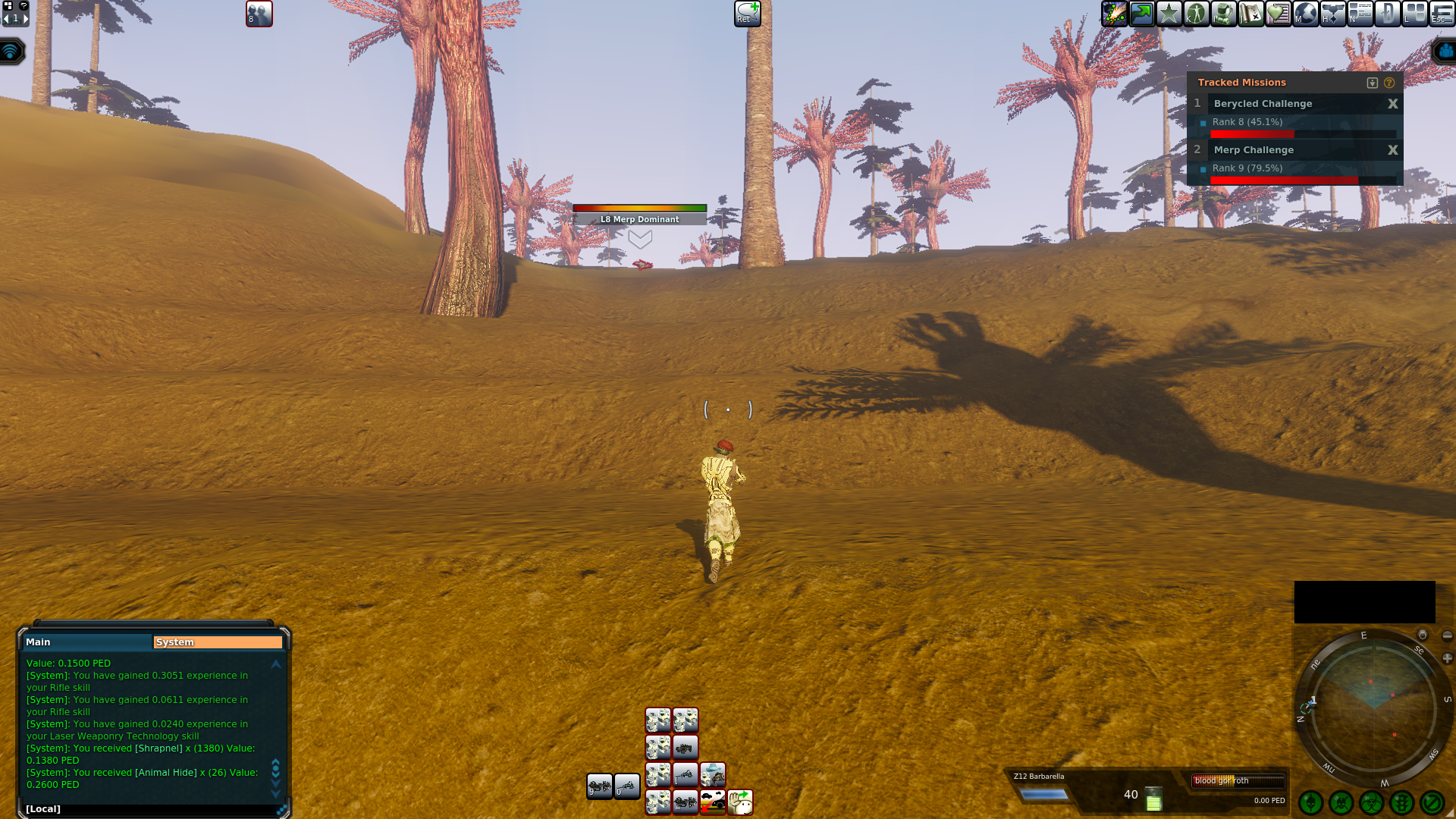 Its runs like this are the reason I don’t just give up the mid hunt and come back later to see if loot is going “better.” I would have missed out on finding that gun and more than likely would not have found anything better.

Entropia Universe is also quite the long cycle of a game. For all I know I could spend months here and not still find the actual piece of gear I’m looking for. That item itself while only rare is not the rarest of drops that could still be dropping off these creatures either. It looks like I’ll have more hunts of Merp in my future.