There are quite a few daily missions to run on Next Island and Ancient Greece in Entropia Universe. This won’t be an inclusive list including all of them. These are some I’ll run when I’m here if I have the time. As many have some decent markup and other benefits for doing so rewards. One of the first things you should consider doing is finding the NPC called Cecily at (127493, 82784). She gives you a daily where you can hunt Red Papoo Stalkers. The reward for doing so is 2.5 PED of universal ammo. While this can be repeated daily there is a bit of a catch.

While that might sound like a decent deal for a mission and it is. There is a massive catch to these sorts of things. You need to be using the NI basic Laser Pistol which is an E.A.C Laspitol (L). This item you can buy from a vendor inside the building in the screenshot above.

There is a dirty little secret regarding a lot of these kinds of missions found on other planets. The creature they want you to hunt usually has a bit of health regen or a little more health than the gun they want you to use should be dealing with.

Thankfully there are a couple of ways to combat that. First, you only need the finishing kill to be with the weapon required. In this instance is the E.A.C Laspitol (L). That means if you use a higher damage output gun and do some damage first. Then switch over to using the TT pistol as a finisher. You still get credit.

The other trick is if you are someone who bought the Starter Pack Gold that came with a gun and gun amp. While that gun is decent for this if you don’t have something slightly higher in damage. The Zx Sinkadus amp can be placed on other weapons giving you a bit more damage such as the TT pistol. 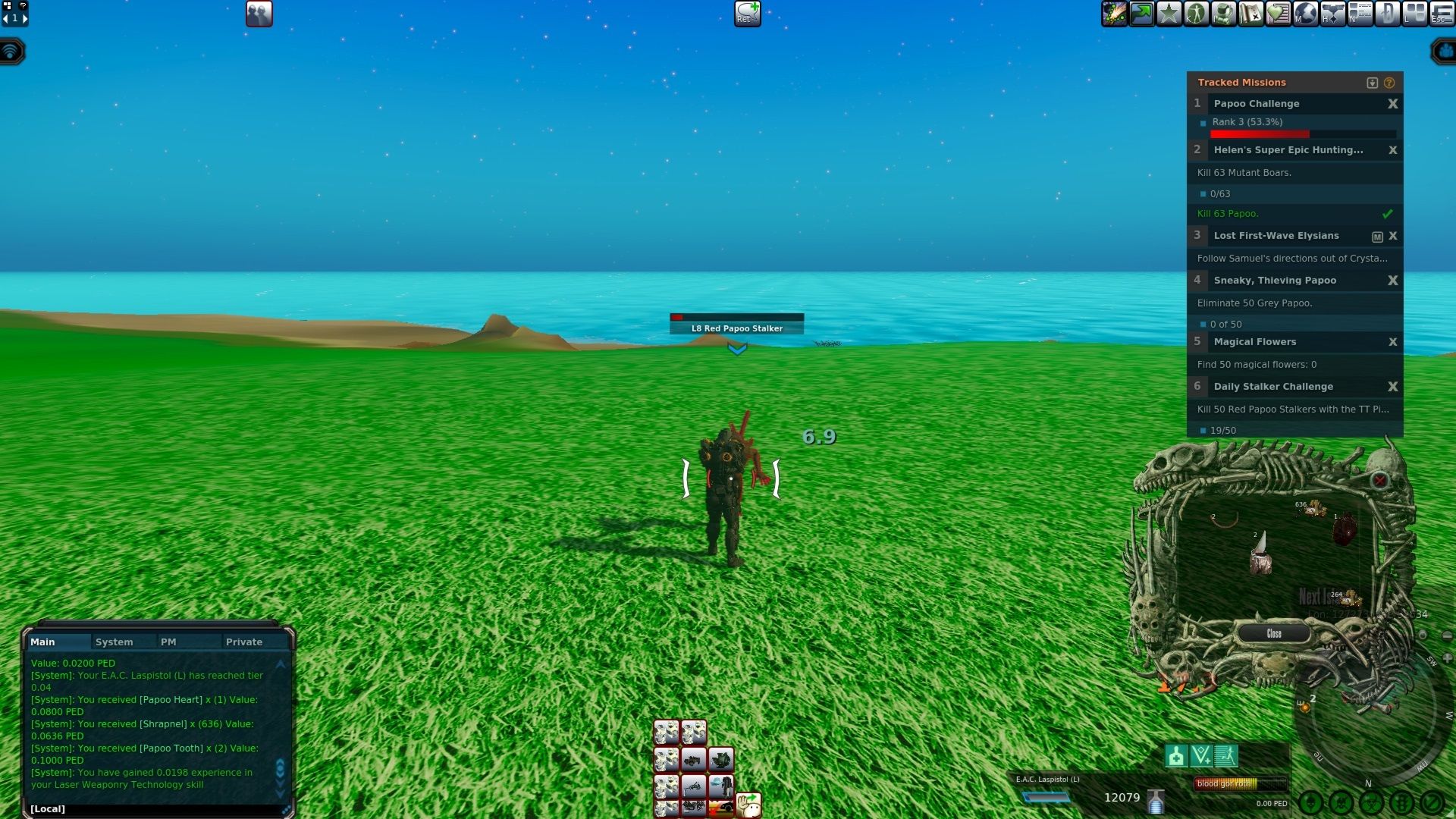 As far as finding the Red Papoo Stalkers they are right close by in the massive green field. They are level 8 so do be careful to pull them single. Otherwise, they are not much of a challenge I ended up wearing just Harrier Scout armor and switching between the higher damage gun that did not quite kill the Papoo and the TT gun to finish them off.

Since this is a daily mission if you have any other Red Papoo kill required missions. It would be smart to hold off on running those till you have this daily stalker challenge mission as well. Not to mention you are also working on a codex.

This mission ends up being quite the deal for those that are not in a hurry on Next Island. This planet has some benefits to those staying for a while that don’t need to breeze through everything within a short period. On Next Island one important crafting ingredient is called Elysian Tech Chip. You can be rewarded 1,600 of these daily by killing 200 Mountain boar Piglets in the Daily Sebastian’s Mission. Sebastian can be found around (137869, 83140). 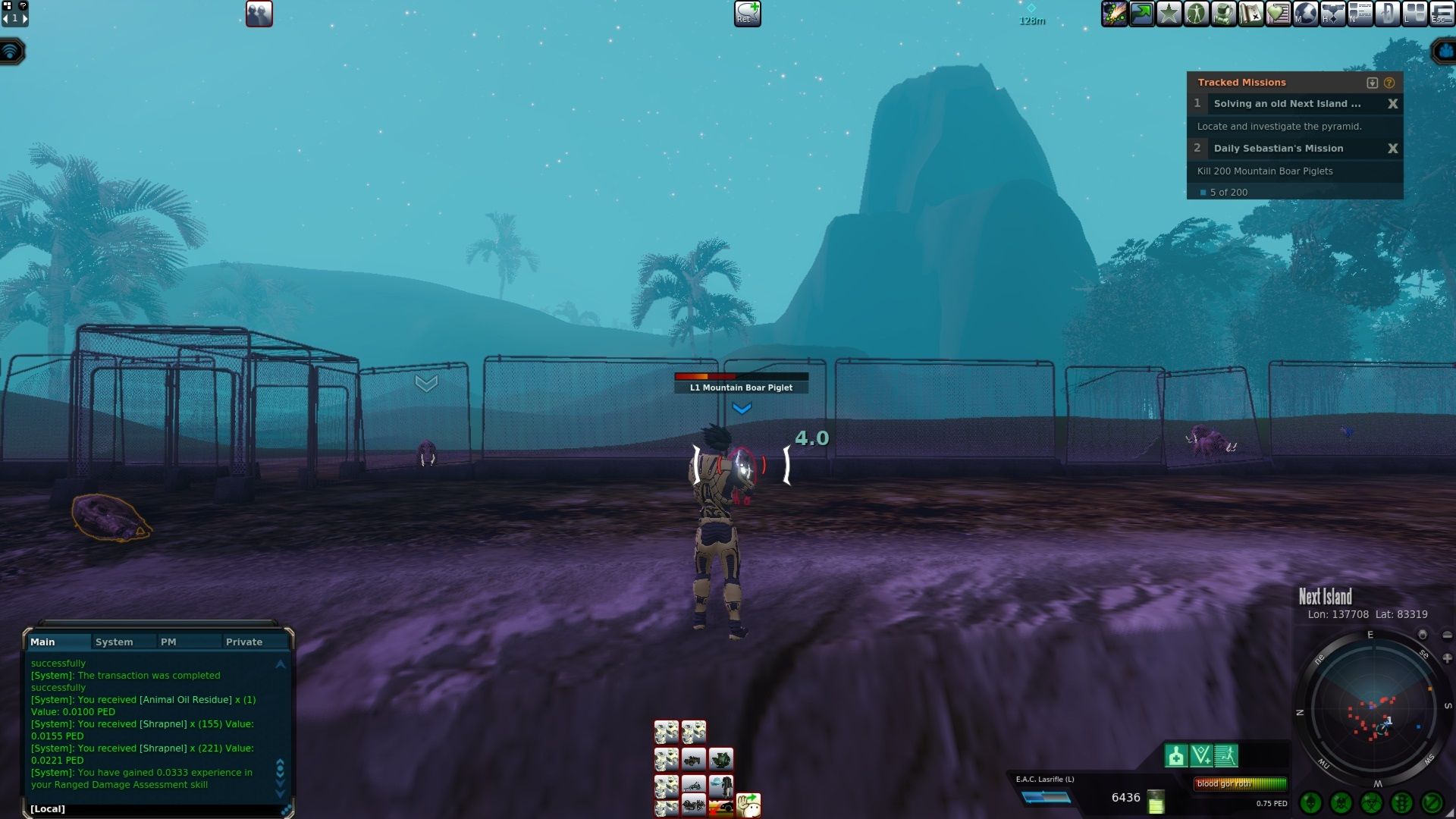 Not all mountain boars count for this mission. The ones I found work best are in a massive fenced-off area of them around (137708, 83319). They are quite weak wearing armor was a bit much however were lazy. I even switch over to using the TT gun I still had on me to stop overkilling them by too much. 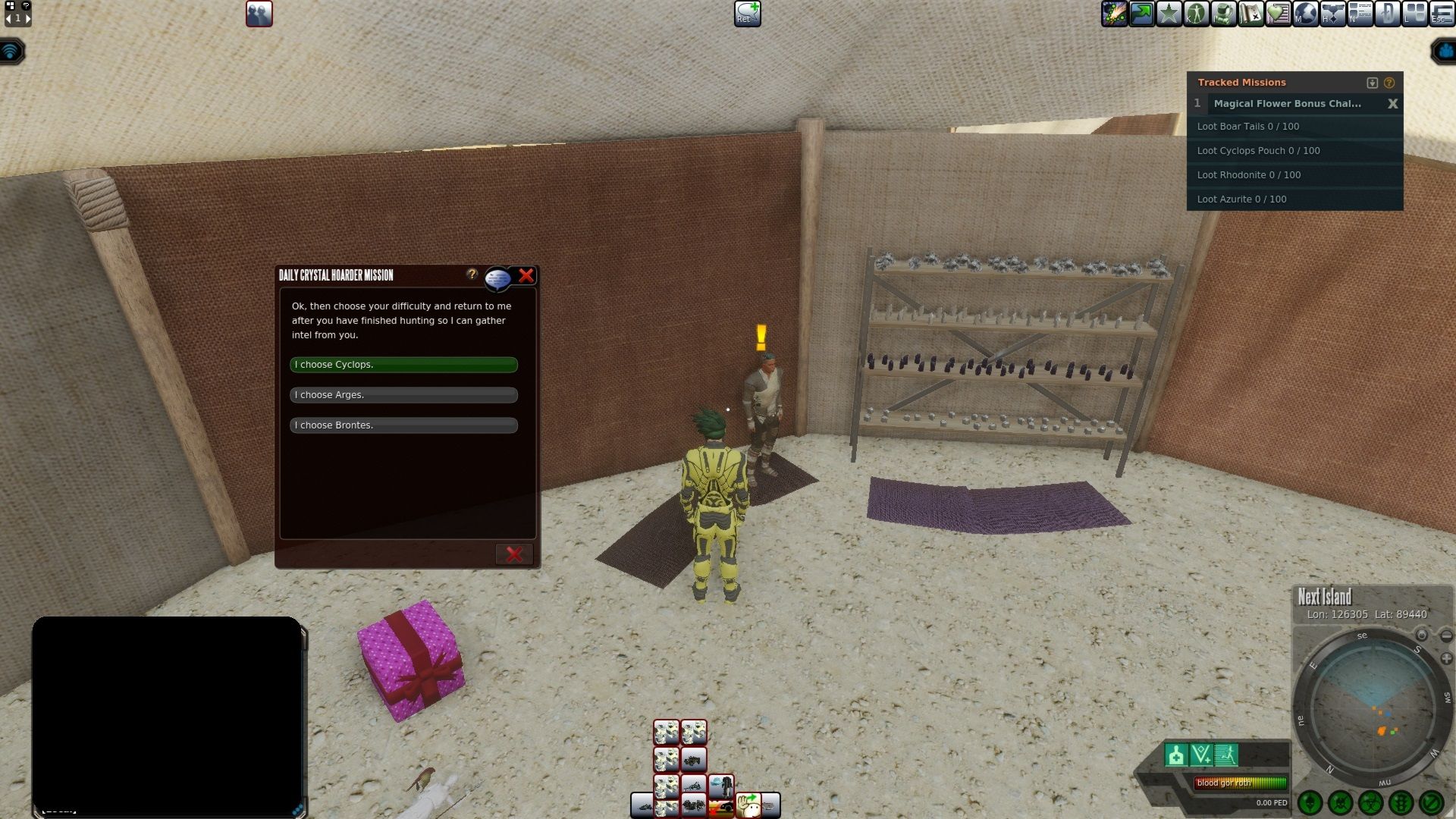 On Next Island you can pick up a mission called Daily Crystal Hoarder at (126305, 89440) from Hiresh that sends you off to Ancient Greece. You get to have your choice between three different creatures to hunt. With them each offering a selection of different Crystals as the reward.

For this, I simply went with Cyclops as they are rather easy and cheap to kill and to show some variety. For those looking to stack mission, you should take the daily out of the next section as well. 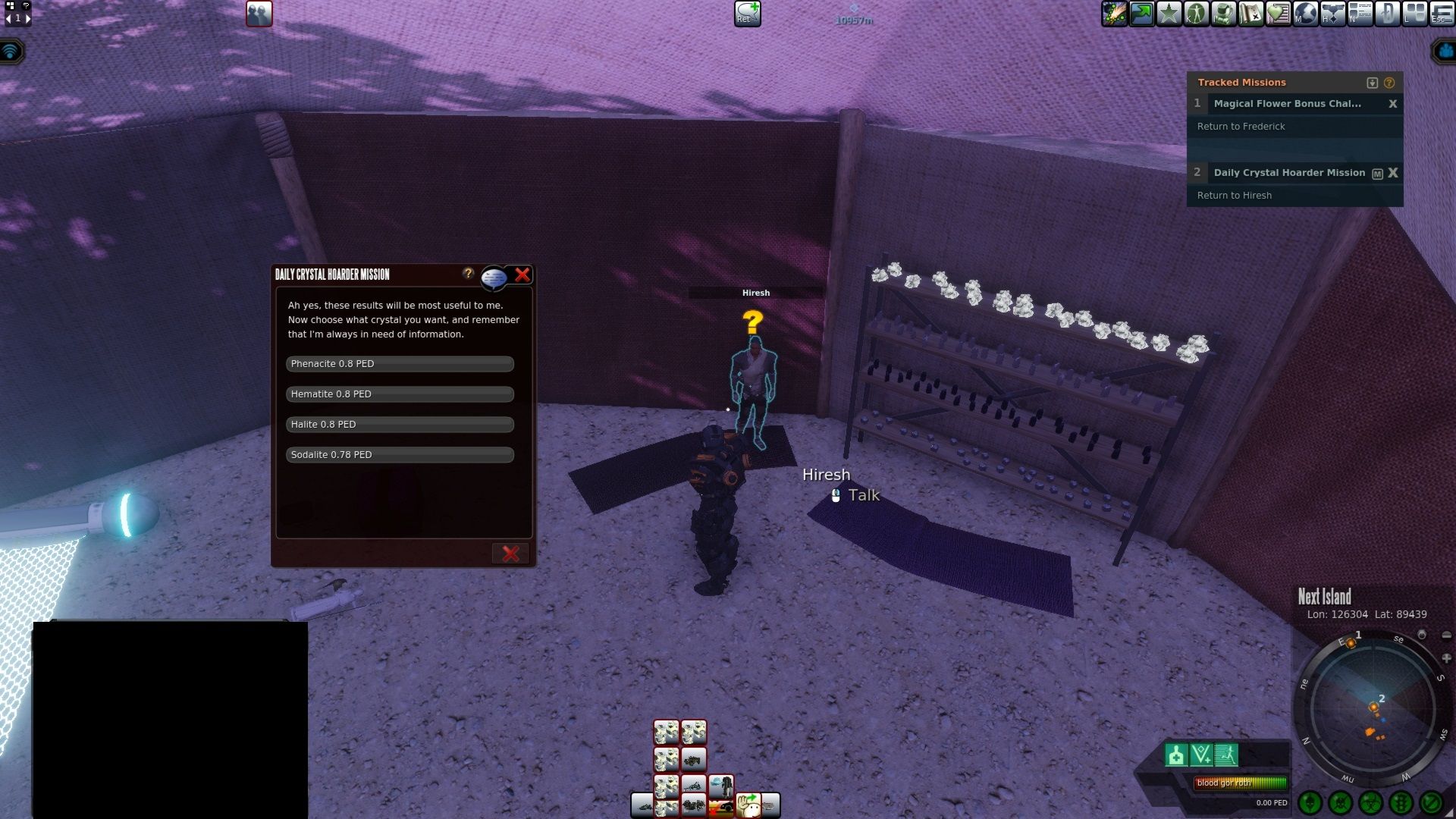 Once you are done killing them you can return to Hiresh for a turn-in. you get a choice of a couple of different crystals to pick from. It is always best to check the markets to see which ones have the highest markups unless there is one you need for crafting yourself. You have perhaps seen the NPC 2419-Juliana all around Next Island such as at Crystal Peak or even in Ancient Greece in the market area. She has quite a few different options for you to check out and select. You however can only do one of these a day to make sure to invest some time taking a look at what she offers.

The great thing about this one is if you are a crafter, miner, or hunter there is a good chance there will be a mission for you in each of the different factions. 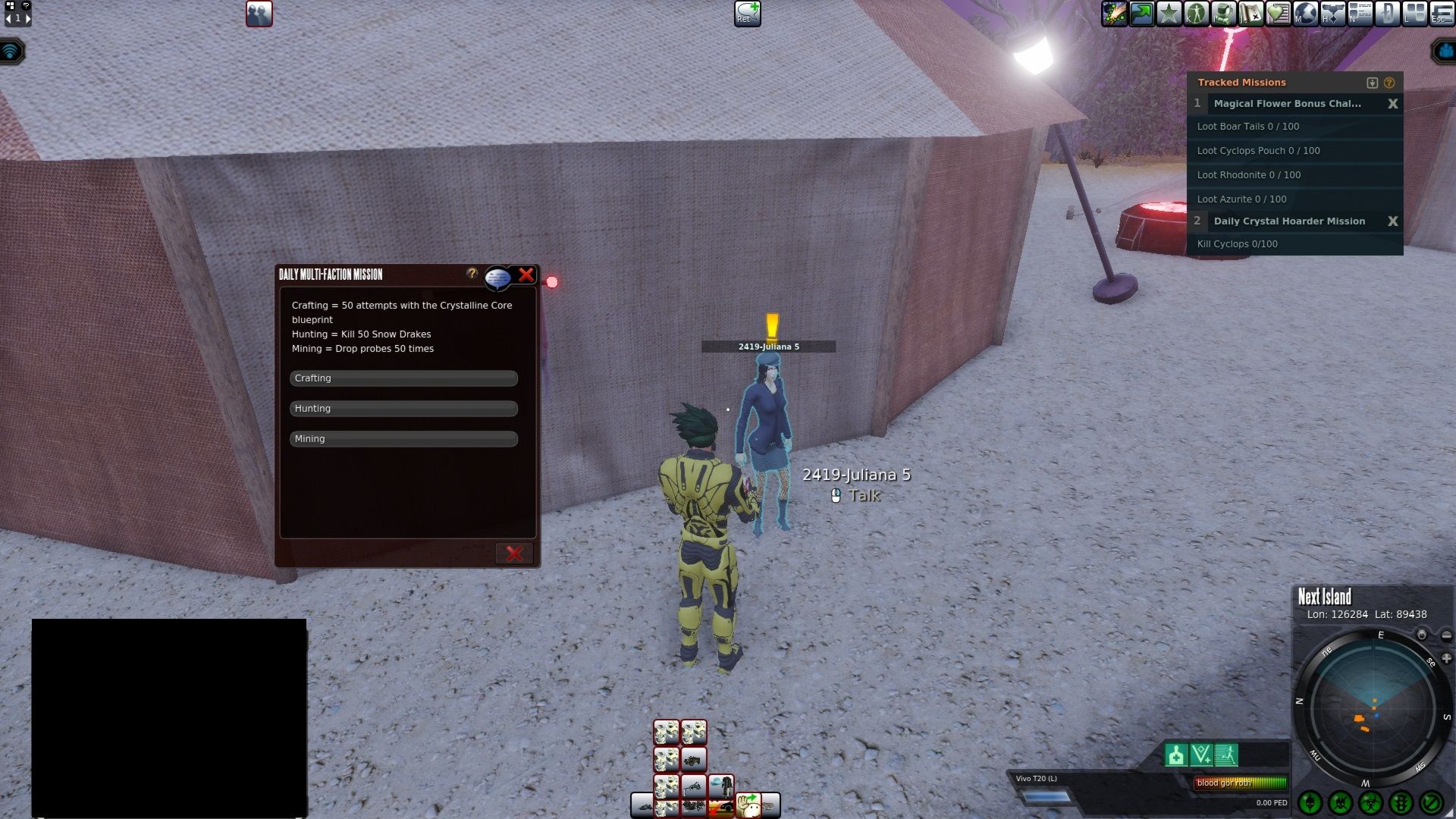 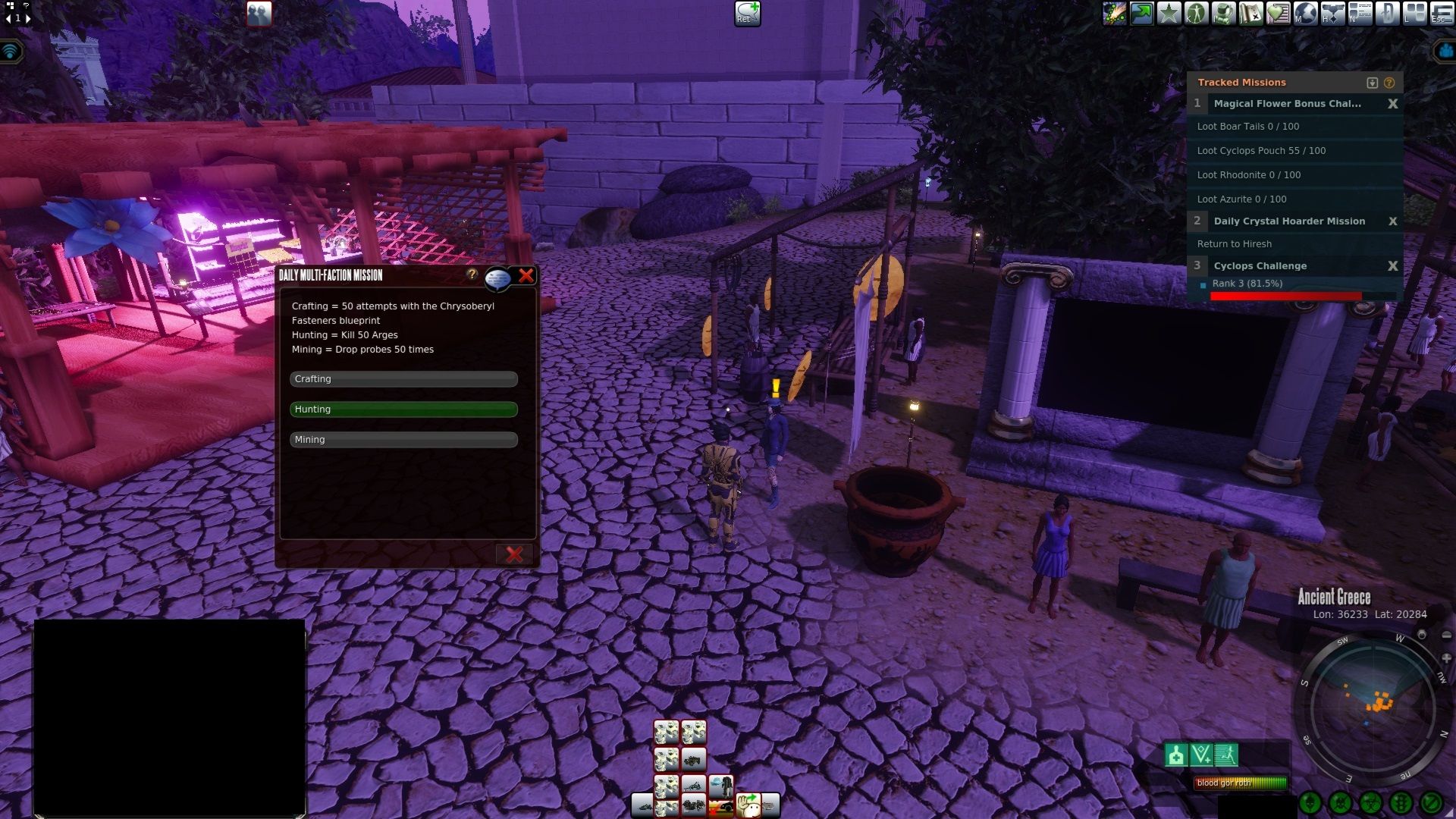 While I did not need to switch over to Juliana in Ancient Greece I thought why not show there the location of another one (36234, 20284). This time I did select Ancient Greece and opted for killing 50 Arges.

I could have stacked this with the daily in the above section. I had my reasons for wanting to hunt two different kinds of cyclops. As such, I opted to have different options for both.

As far as finding some Arges they can be found around (36662, 20729) among many other places close to the city. Depending on what mission you end up selecting where you end up going will more than likely be different.

Once you are done killing 50 of them you get a popup asking for you to select the kind of reward you want. Since these are all limited click blueprints a smart player would create their list for which ones had the highest markup. As some of these are sought after and others not so much. 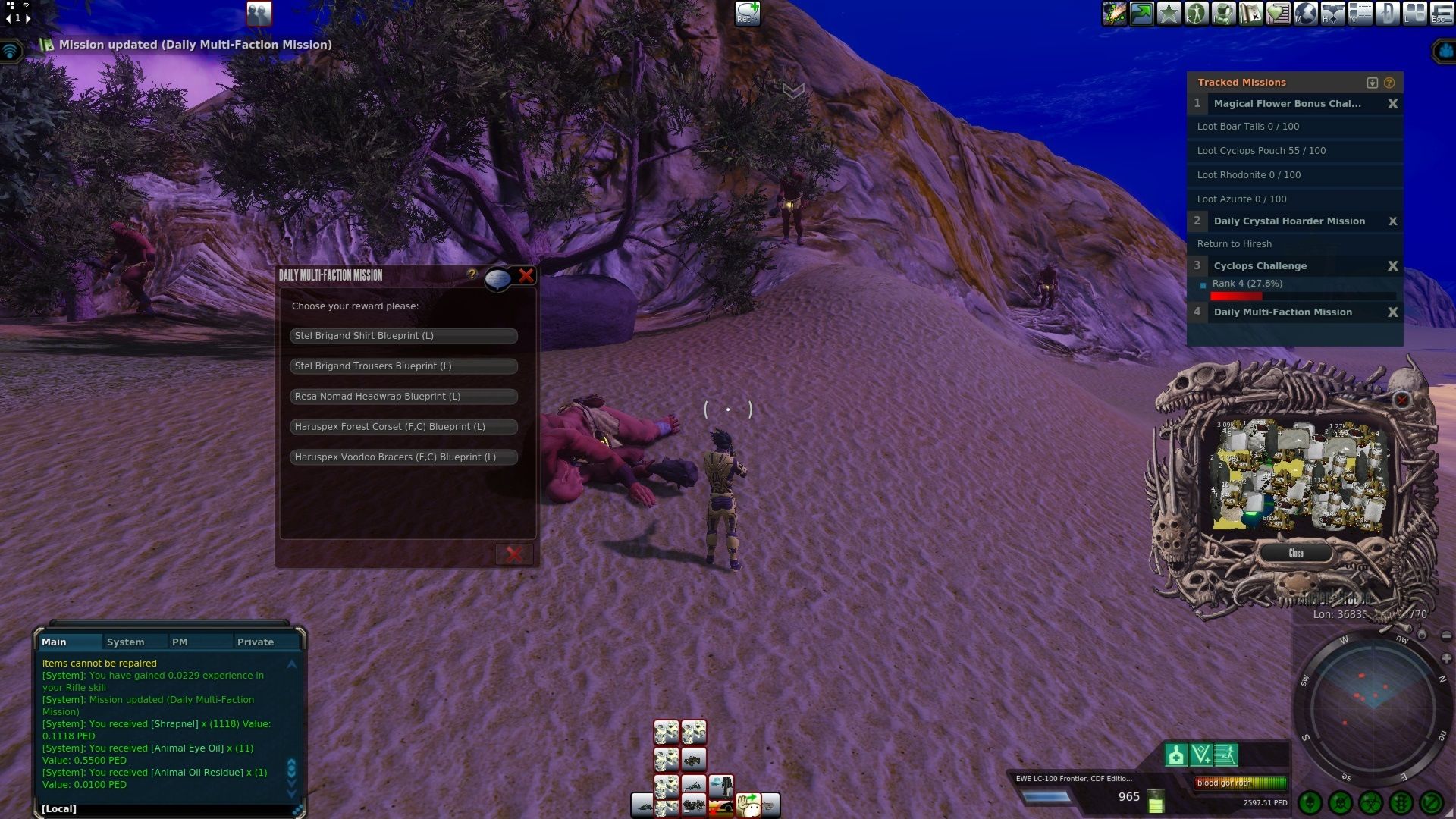 As far as what to pick I’ll leave that up to you to discover. I am not much of a crafter. I’m just working on getting one of each over the long run. Who knows perhaps one day I’ll feel like using them. You can get the mission for Lesser Elysia Challenge every day. The NPC that gives it May can be found at (135359, 88601) in Tanzanite View. 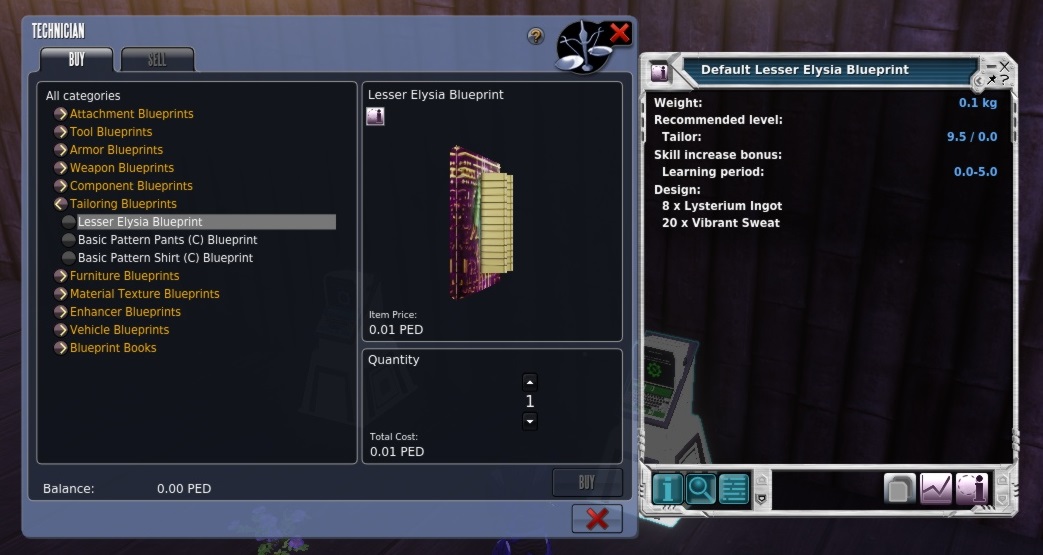 The blueprint itself is sold at any Technician station on Next Island under Tailoring Blueprints. 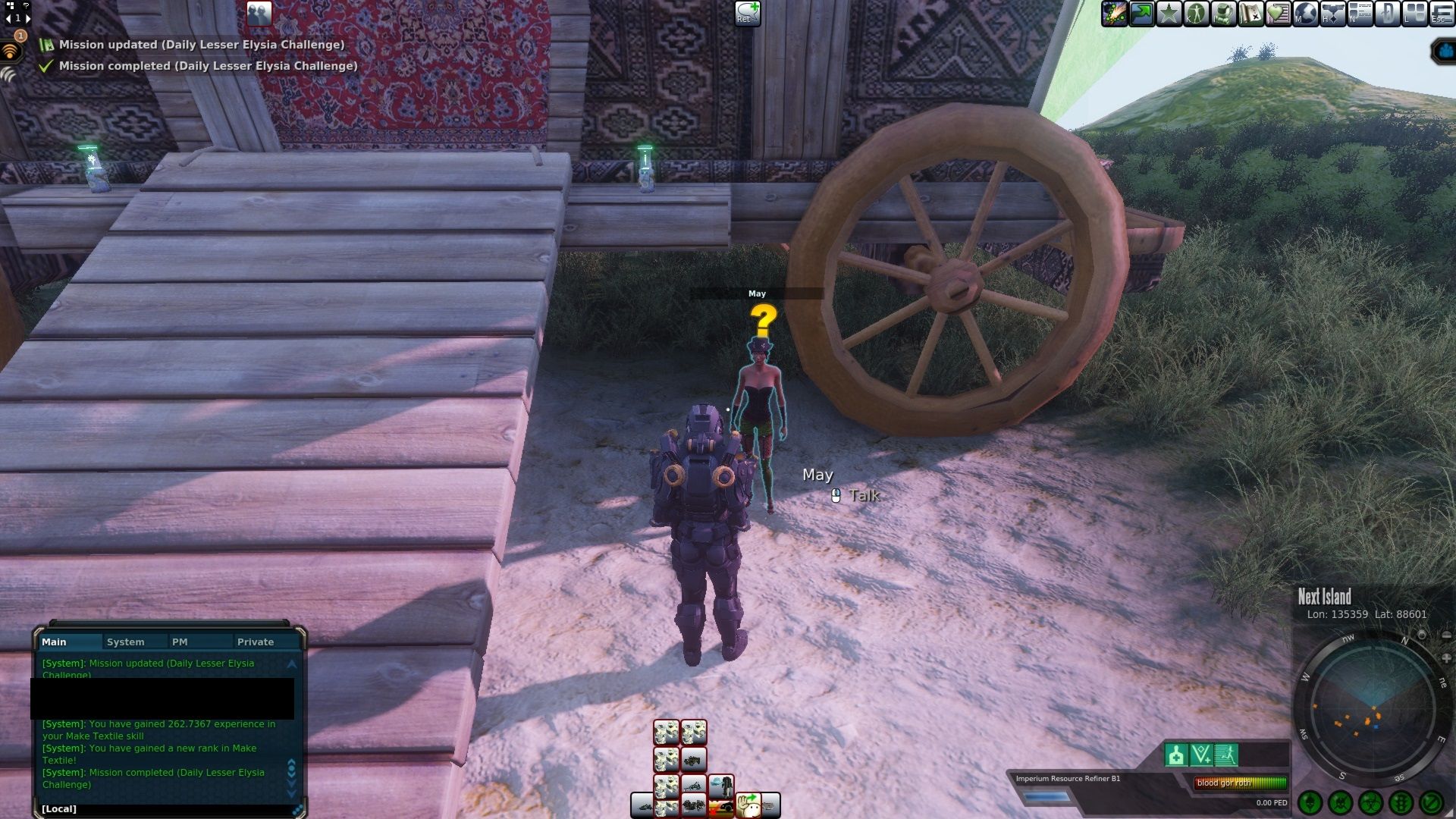 Once you complete the mission you end up getting a decent little amount of textile skill I believe 0.4 PED. While that might not seem like a lot after taking a look at Skill implants for these there appears to be a reason for going on this mission beyond just crafting Lesser Elysia.

One final note when thinking about daily is talking with NPCs from the faction you have joined. For instance, I’ve started working with New Elysian Order they have several daily missions to pick up.

Keep in mind these faction missions directly from the faction itself tend to be a lot harder than other daily missions. The missions I have from them for instance are killing 50 Drakes and crafting 100 Crystalline Cores. 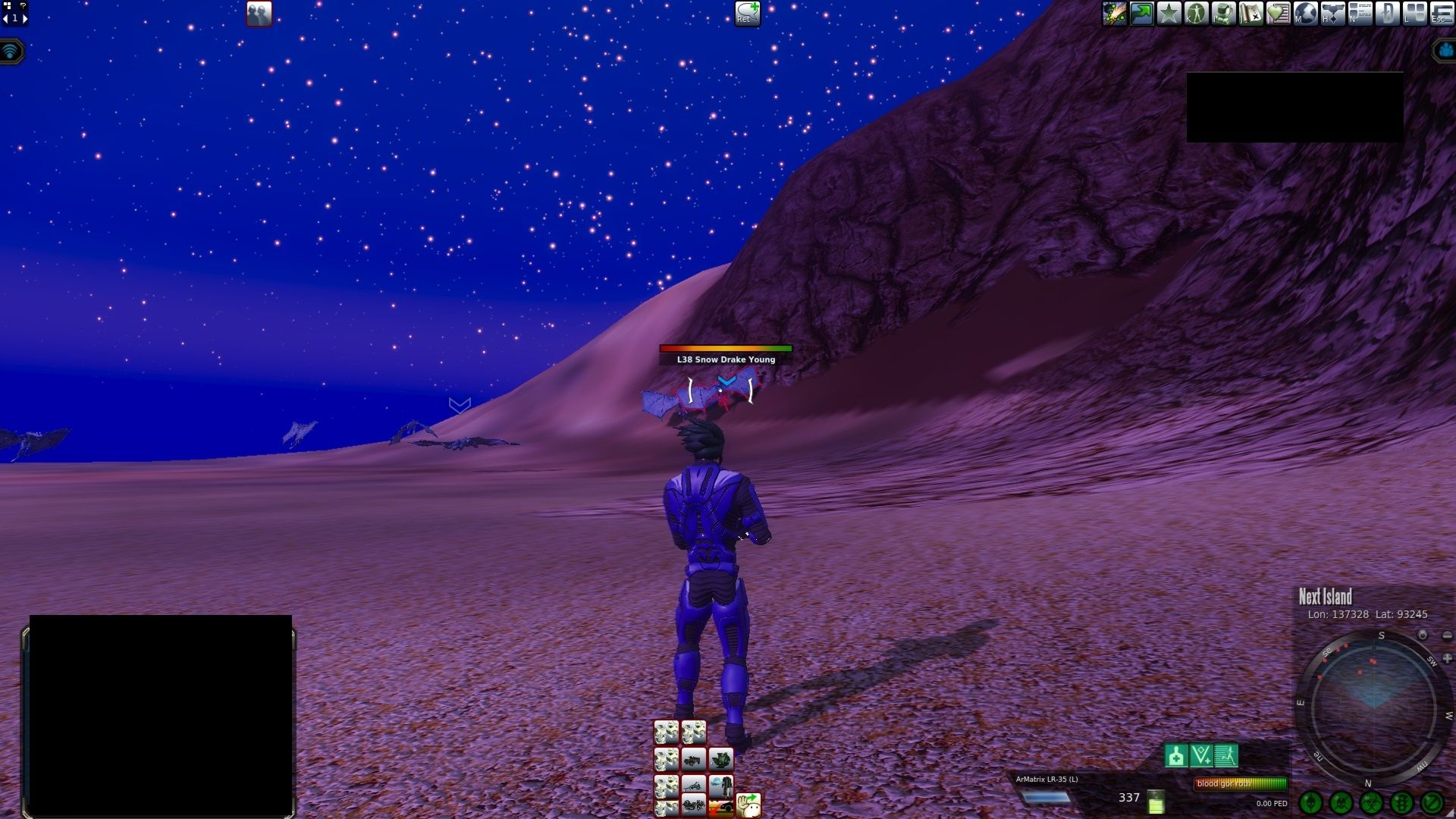 It is always great to see a planet have quite a few different daily missions such as Next Island. Even better when there is a little of everything for everyone. A lot of times you just end up only finding hunting daily missions. These are only some of the ones I’ve found.