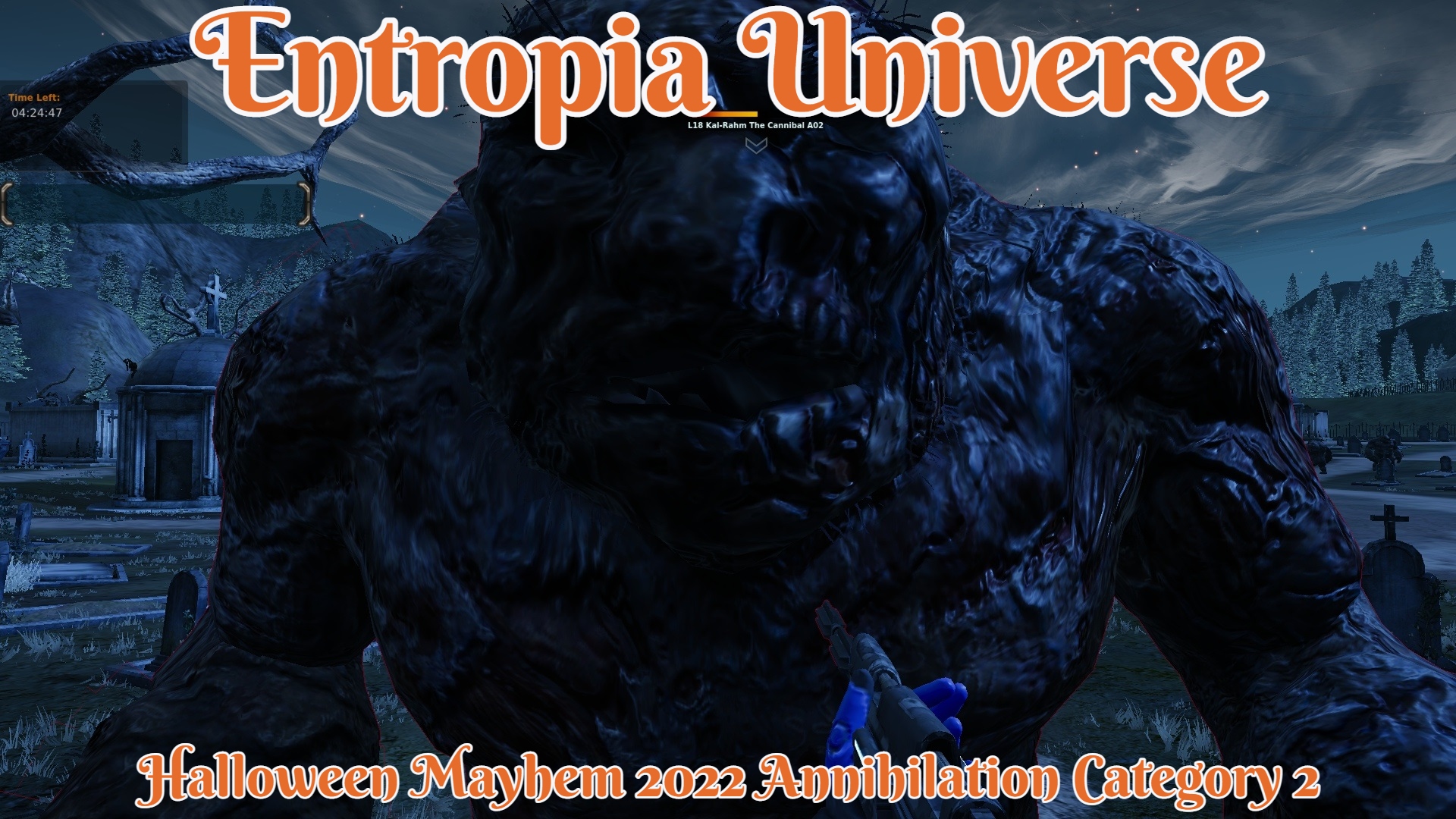 After grinding it out for a while in the category 3 instance for Halloween Mayhem in Entropia Universe. I decided to test things out in category 2. The zombies in there are a bit easier to kill so I should be able to clear a bit faster.

I’ll still be using the Armatrix LR-35 (L) amped as I have been for this event. With the lower-level Annihilation Zombies having 20% less health than I’m used to dealing with I’ve noticed the need to use a finisher gun more frequently. Quite a few times they will just have a sliver of health left and I don’t want to have too much overkill. 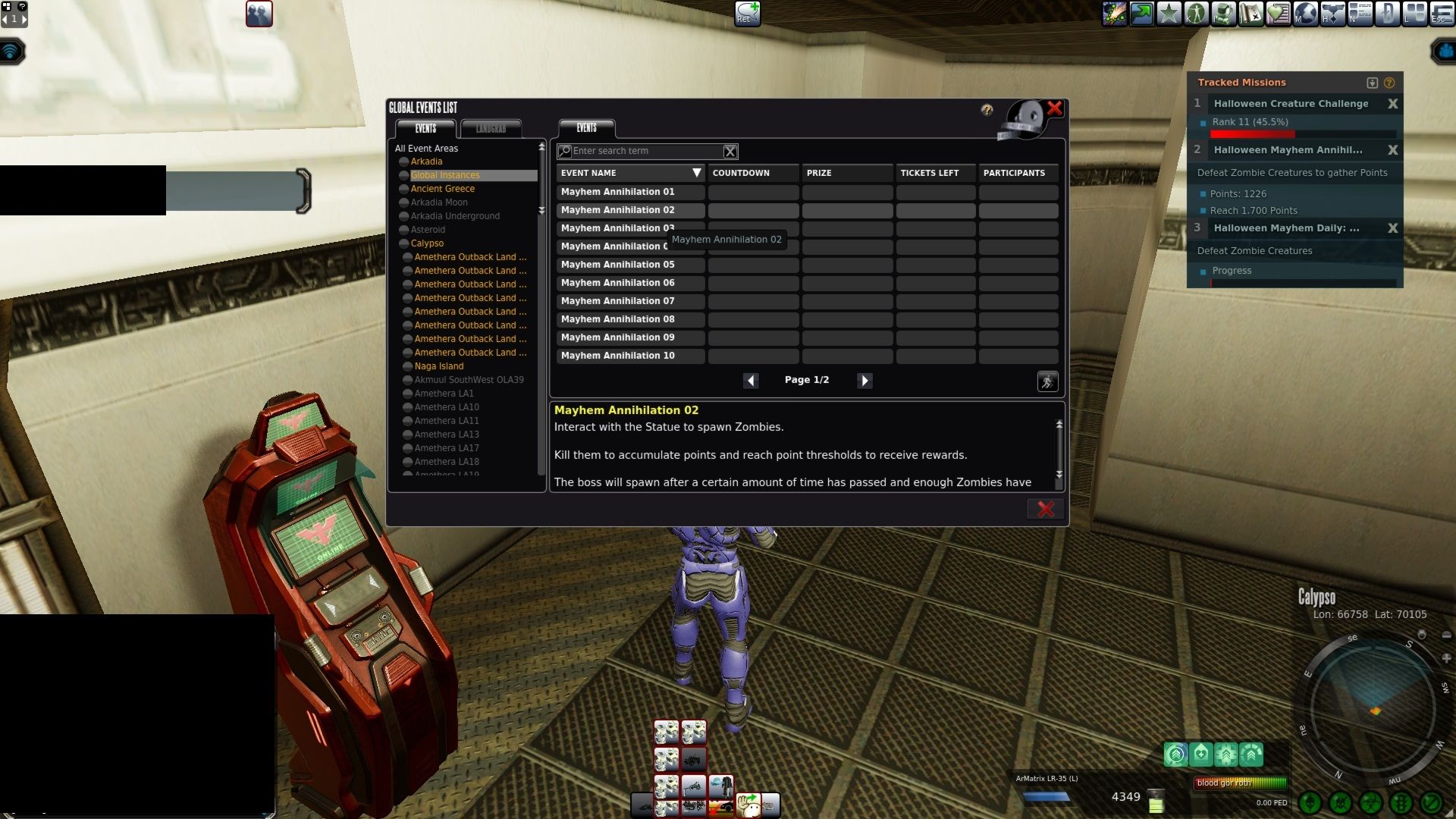 While the zombies will be dealing ~26% less damage I’ll still be using the same gear as well. As before Gremlin is not the most ideal since they deal electric and penetration damage among other damage types I do have protection from. It is however after running the numbers the best set of armor I have to deal with these zombies.

On top of having slightly lower repair bills on my armor. I also noticed I was healing about 44% less when it came to repairing my healing device. The armor and healing decay as a total to the amount I cycle per run is still low enough that I can’t quantify spending money on a different set of armor just for this event.

As the expected cost savings would just be a fraction of such an investment. I am quite shocked when I run the numbers and see the total decay cost for healing and armor so far is about half a percentage point. Making me wonder how those costs are so low.

All the different Annihilation categories for Halloween look the same. It is just the difficulty of the zombies and the boss that spawn in them that is different. I have yet to grow tired of how the instant looks. I do sometimes move around just to have a slightly different backdrop.

I entered into the category 2 instances with 1226 points towards the Halloween Mayhem Annihilation mission. One of my main goals was to try and determine if in a certain time frame I could end up getting more points per hour than I have been.

While in theory, I will have a “lower” chance of getting bigger points on each kill if any. I will have a higher per-hour kill rate that could not only overcome that but give me a lot more opportunities at getting a higher amount.

Regardless, most of the kills would still reward me with zero points. I however felt like I was not getting the number of points I need per hour to get close to finishing all ten stages of the mission. At the rate I’m going before this instance it was looking like a full week of nonstop grinding to reach it.

While the silver rewards are not that amazing to grind like a crazy person to that extent. They are a nice little bonus to have on top of whatever else I end up doing during this event. I like the fact that I’m stacking quite a few things in my favor from the codex, boxes dropping, multiple missions, and so forth. Before I had even gained my first point off a kill not even 3 minutes into the instance I got my first global. It was not a huge one at only 52 PED but these are also lower-level zombies. It was naturally just shrapnel. One of these days I will have other things! 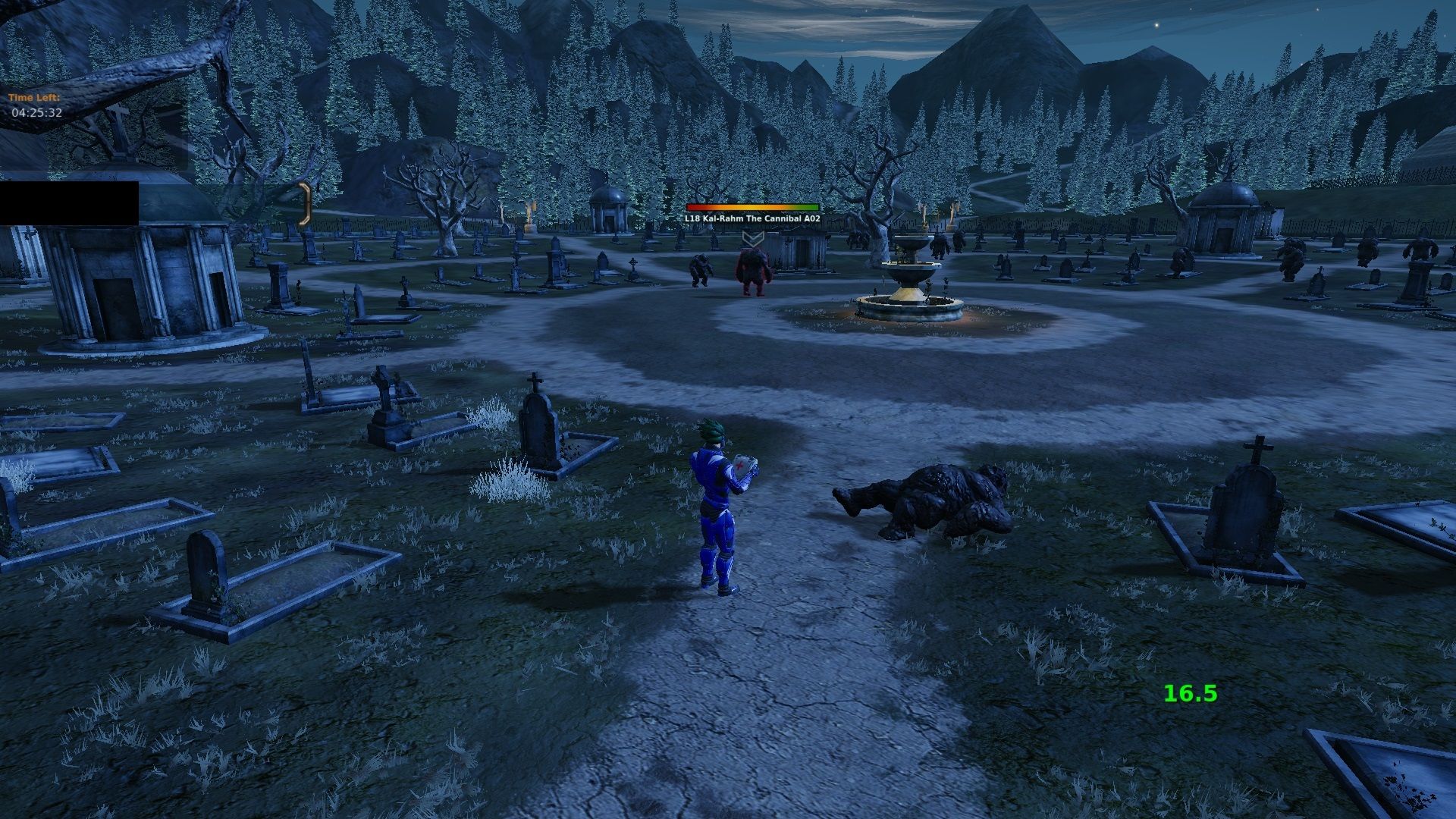 The other thing I wanted to test for was seeing if I could get closer to having the boss spawn at each 30-minute interval. For that to happen I need to be killing 96 zombies within 30 minutes. While I was not quite there yet unless I was being lazy I could get the boss to spawn around the 35-minute time.

This was about a 5-minute or more improvement over what I was able to do in category 3. I’m also rather pleased with this number as I also don’t want to be killing more than 96 zombies and waiting for the time limit either.

The boss in terms of drops still shafted me for the most part. With quite a few of them that I’ve killed now and how much health they have. I was kind of hoping by now to get more than their standard couple of PED worth of loot. Granted getting a lockbox and a Mayhem token with each boss kills is at least something. 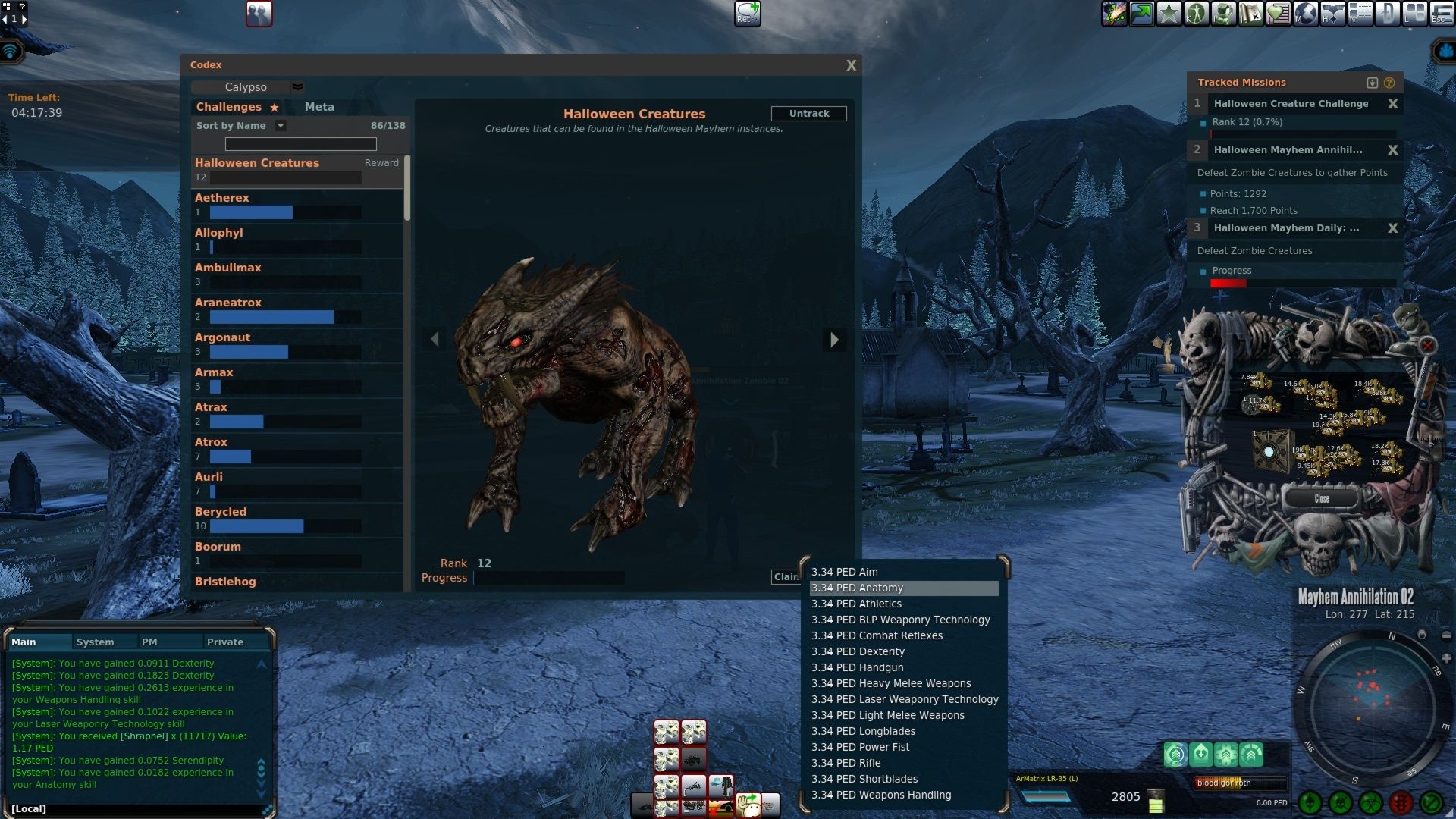 Since I am hunting lower-level zombies each kill has a bit of a smaller gain towards the Halloween creatures codex than I was getting hunting higher-level ones. It is still moving at a decent pace I got to enjoy some further anatomy skill gains from ranking it up further.

You might also notice at this stage of the instance I’m only up 66 points. I am somewhat starting to doubt if jumping into a lower category was going to be the best play here. This would be a feeling I would keep having for quite some time.

Points were also not the only thing I felt like I was lacking. I was almost holding in terms of loot. I however noticed I was getting almost no mid ranged non-global loots. Maybe I’d get a 10 or 20 PED loot here or there. It felt a lot less common than I was getting on other runs. 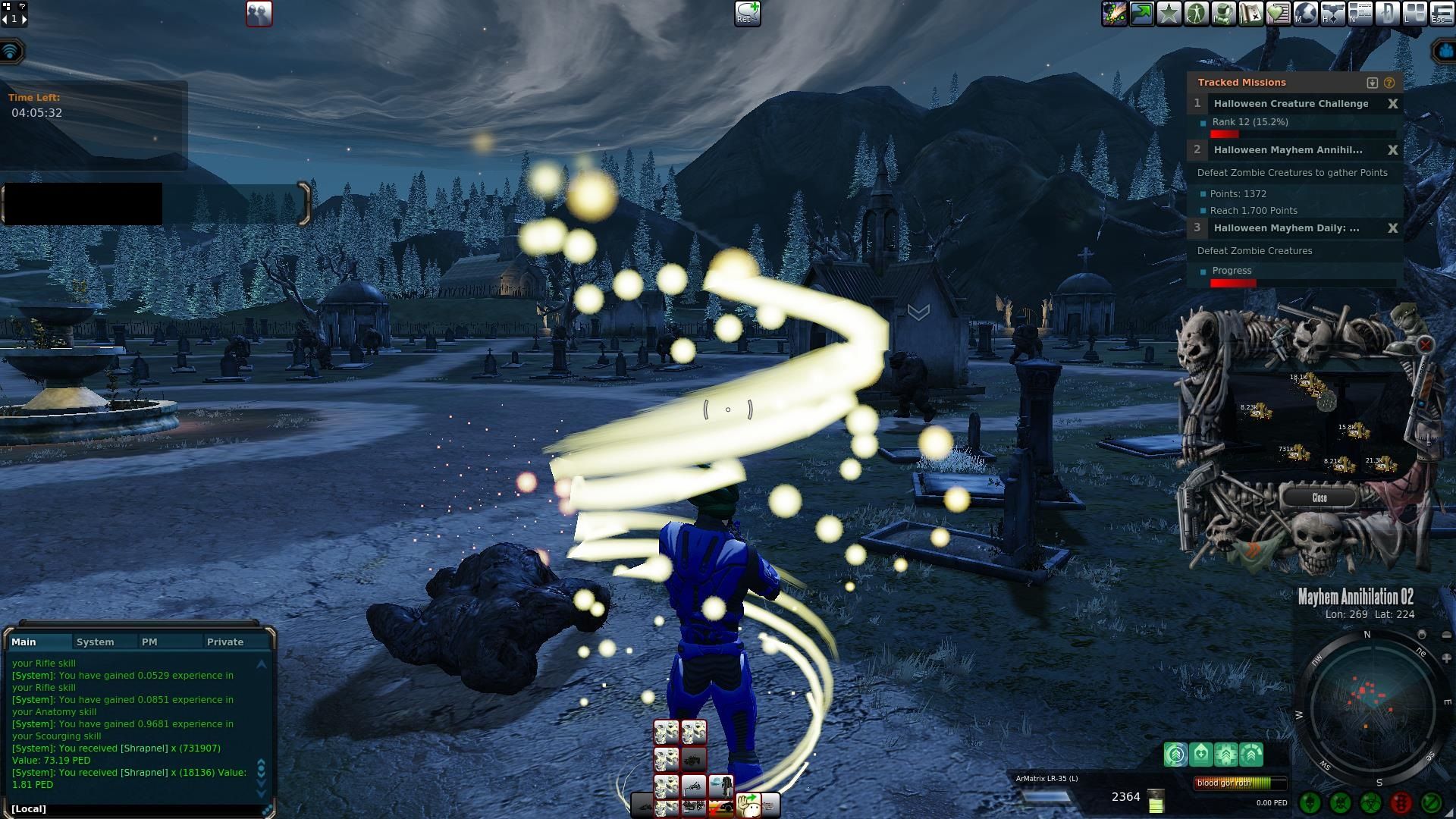 I welcomed getting this next global about an hour into the instance. Not all the runs I would do would end up with me creating a post out of it. This was starting to feel like one of those runs. While again just shrapnel I’ll take the 75 PED at this point. I was going guns blazing and this brought me back to being about break even so far on the run.

This boss kill right here while nothing extra dropped from killing it. It did end up awarding me 100 points which I was not expecting. I had gotten a couple 100 point kills off them at a higher level. Knowing I could get the same amount while not most of the time was a bit encouraging. 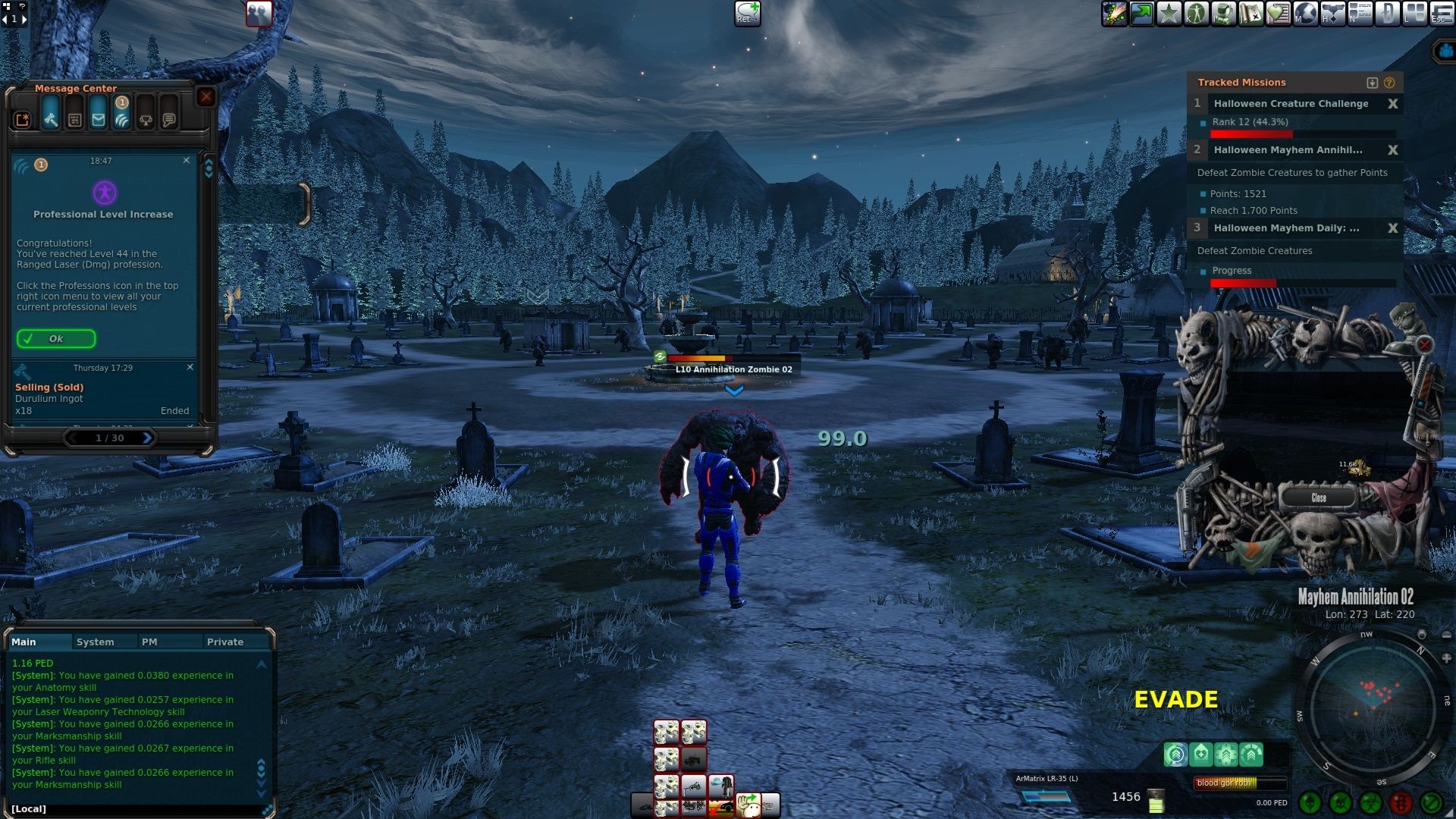 Shortly after that, I reached level 44 in the Ranged Laster (Dmg) profession. I would be just one very long level away before I can not only use a bigger gun but that gun can use a bigger amp as well. It also helps get me close to having the skill to use a couple of guns I would not mind having one day. Those guns are however quite a long-term goal and not all of them are laser either.

One thing I had been wondering up till this point is if I say get 100 point kill and that leveled me up into the next stage of the mission if those “extra” points not used in the last stage would get carried over. I’m rather happy to declare after getting a 100-point kill that the extra 97 points I had did count towards the next stage. 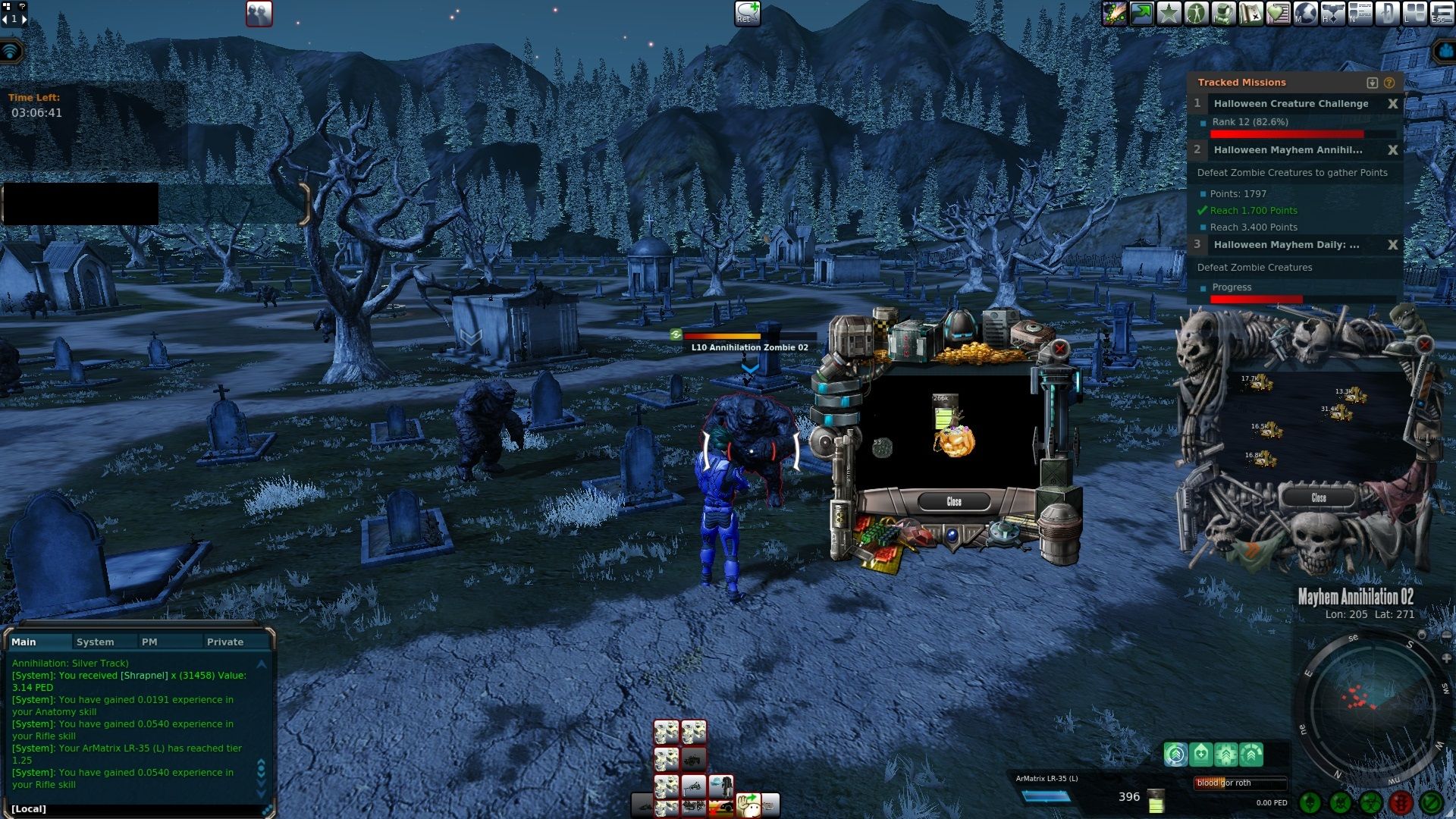 While the first stage of the silver mission is not that great. I did get 53 Mayhem tokens which is why many works on this mission. I also did get some buff candies with each of them lasting 20 minutes each giving me increased reload, run speed, and critical chance term boosts. For now, since I don’t need them I’ll hold onto the candies.

There was also the 26.66 PED of universal ammo. While each of these stages of the mission will keep rewarding the same amount of ammo. Some of the other rewards and amounts will change the deeper I go.

This is also around the time I started to see the light for grinding out a lower instance for points. I had quite a few decent point gains to more than makeup for the draught I was having during the earlier parts of my run. Before I knew it I had reached level 12 of the codex. This time out of the options Anatomy looked the best for the skill goals I have. I’m rather glad it was an option as many of the choices I just don’t care much for. 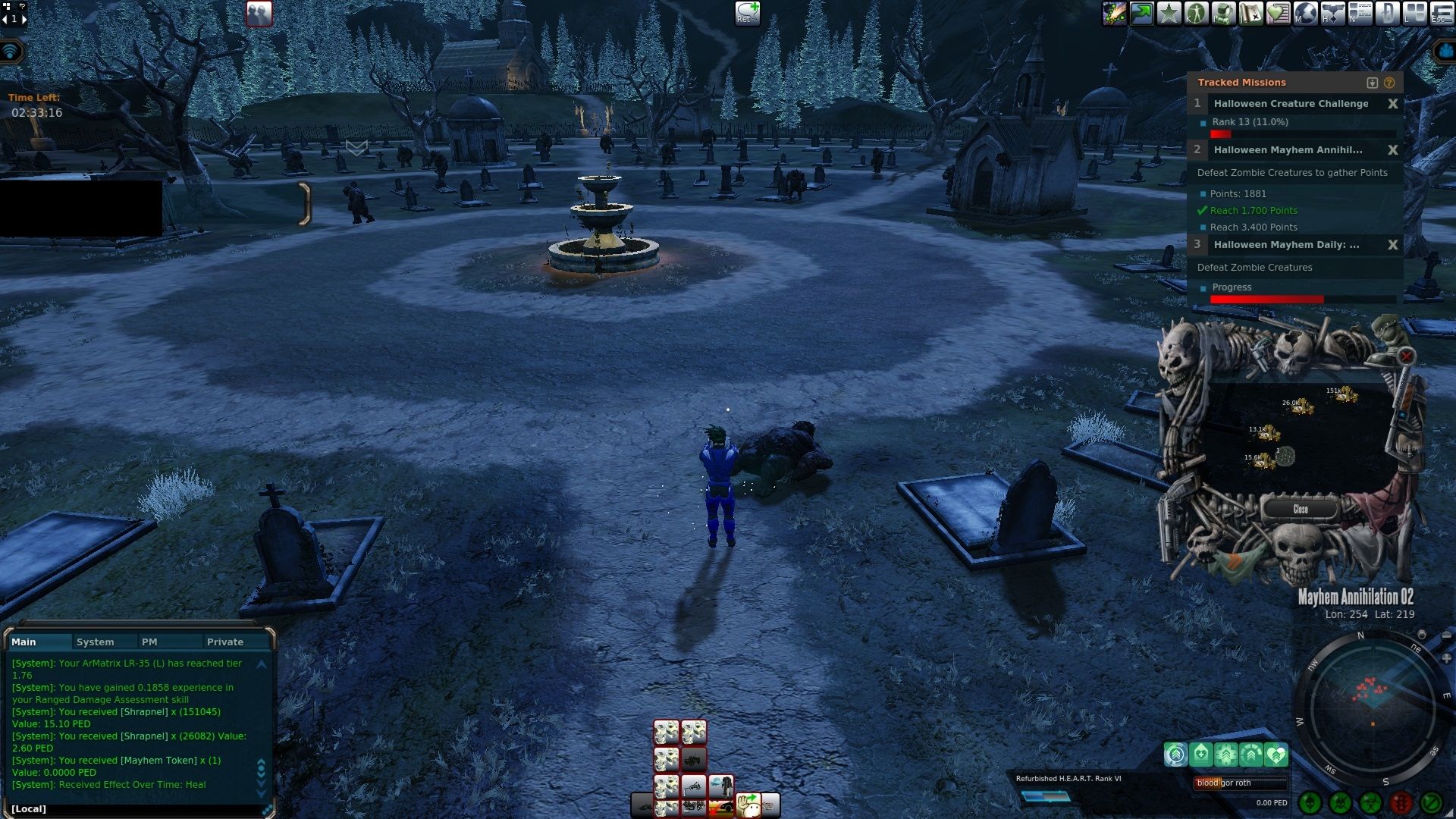 The rest of the run was rather unexciting. This would be one of those cases where I had to afk a few times while in the instance. Thankfully there are some great places to not be attacked at in here for doing so. It was also getting quite late so I did not run the full-timer on this one.

It was however a decent run. I also came out slightly ahead. Along with looting 14 Halloween Strongboxes. Perhaps I’ll get something good out of them at some point.