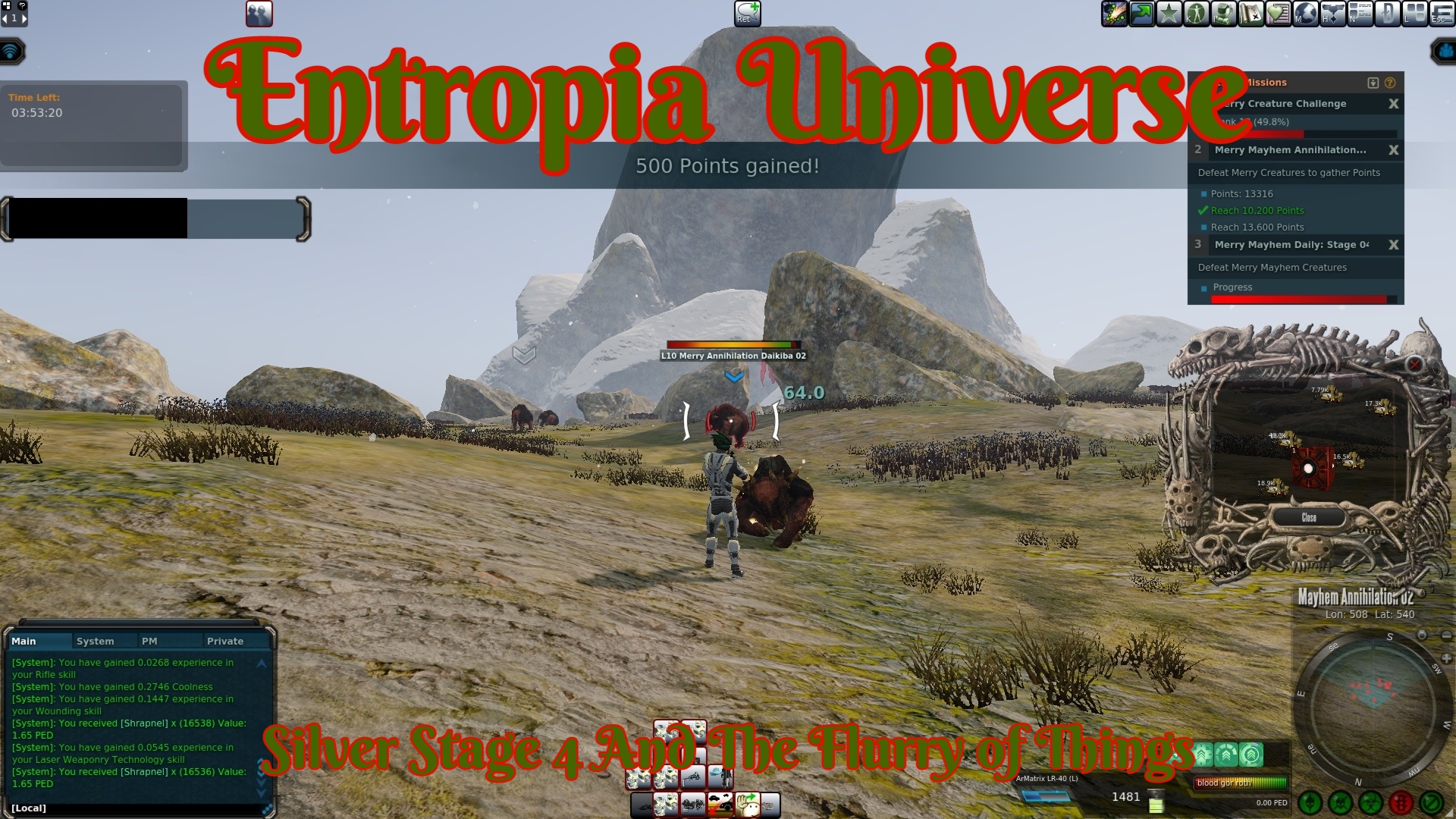 Some days grinding in the Merry Mayhem event you just don’t collect many points at all. On other days there seems to be a pattern of the kind of points you might expect to rack up throughout the day. This was not a high-scoring couple of instances they are however quite exciting ones. 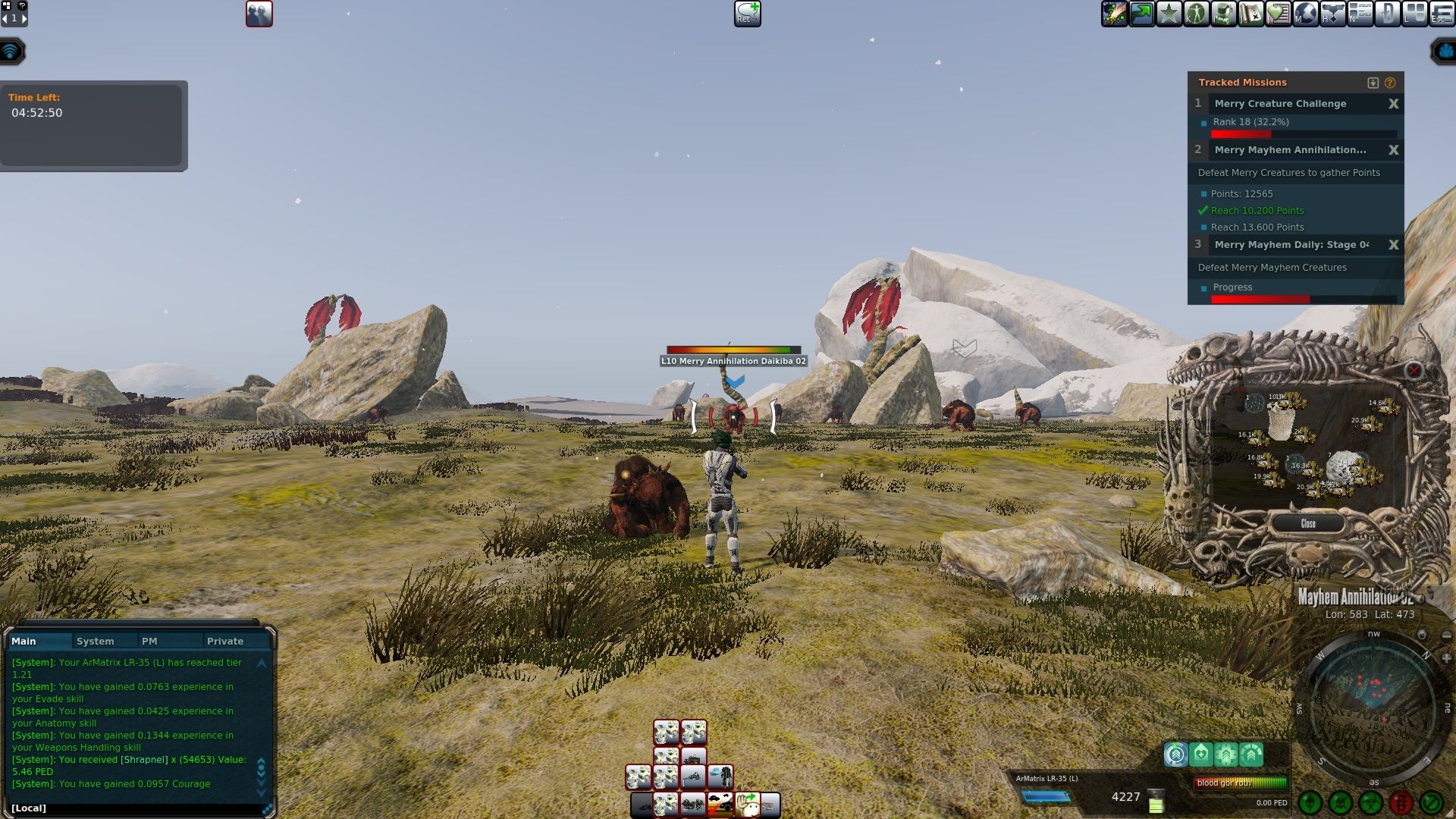 The last grinding sessions I shared had a nice 500-point score towards the end and little did I know that was going to be the start of something more. Sometimes things seem to come in waves for a particular set of time. Oftentimes I’m grinding late into one night and early into the morning of the next. With such trends carrying over.

The bosses during these next couple of runs ended up being rather cheap pointwise. Usually, you can hope at this level to get 2 or more 100-point killings off them during a 5-hour instance. That was not going to happen this time around.

Thankfully some normal creatures I hunt to get the boss to spawn Merry Annihilation Daikiba ended up giving me some 100-point kills. That is however not that exciting when I’m only at 12,565 points of the 34k I need.

At least at this point, I could see progress being made. It however felt like I was one-third into cannoning across a very large lake and was already getting somewhat tired. I had hardly felt like I was at a tipping point yet where there was no going back. I could still see the shoreline I left from. 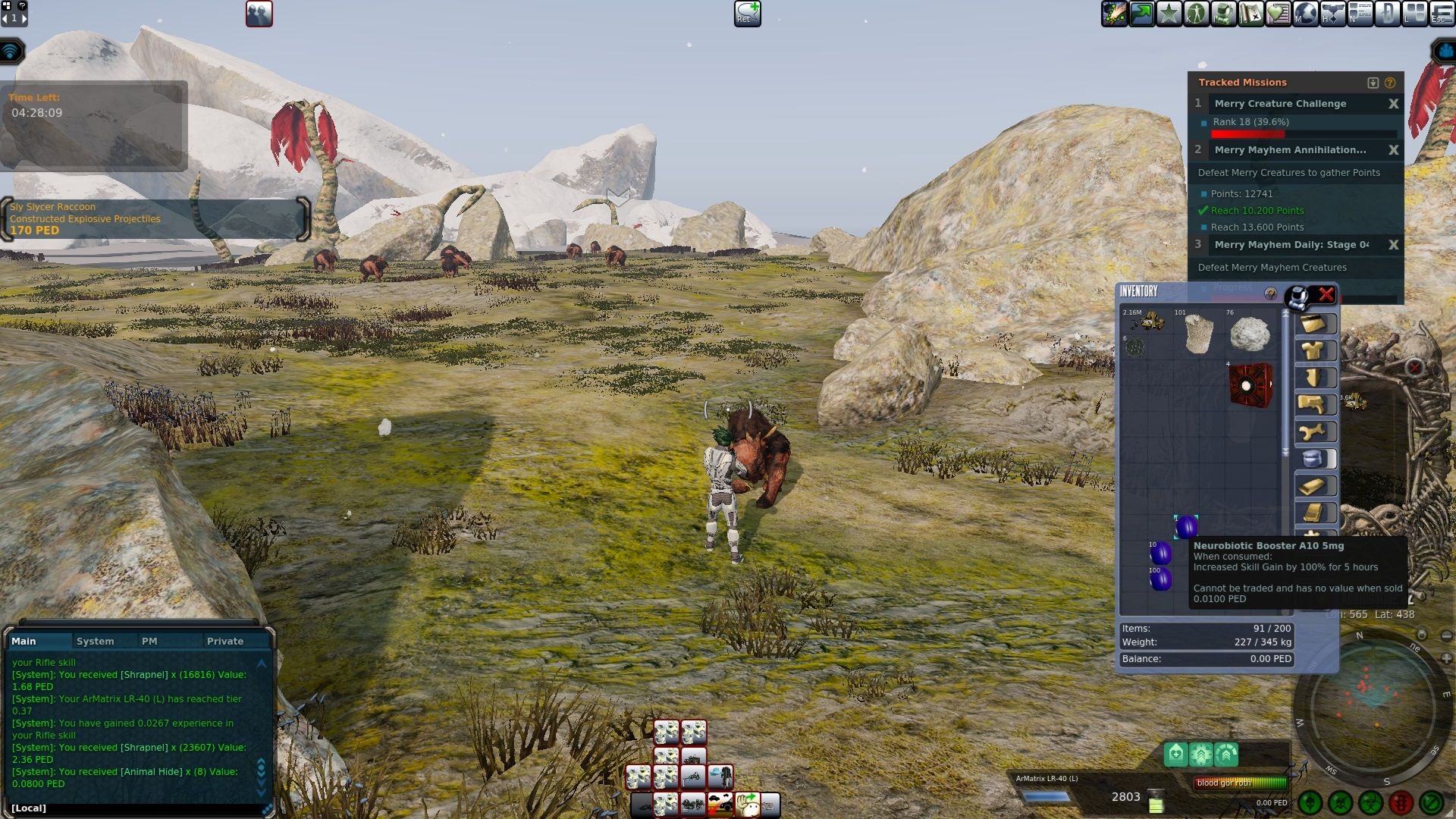 Consuming my last 100% skill gain booster was not the only supply I was getting low on or running out of. I had burned through quite a few guns at this point and needed to start going out and making some attempts are restocking.

While I will miss having 10 and 5-hour 100% skill boosters running for the skill gains. I also won’t feel like I’m wasting things if I need to afk for a short break for 10-15 minutes or if something comes up. As I prefer to not instantly log in trying to save the buff but lose my progress towards the next boss spawn in the progress.

I still had quite a few 30% skill boosts to use. Along with over 100 hours of 10% skill gains if it came down to that. I knew this event would be a long grind I just at this point had no idea how long it would end up being. For a short little while, loot ended up being above average. Nothing that huge but when you are looting a bunch of 5 PED, 30 PED, and 46 PED kills. That can quickly help make up lost ground.

Once that dried up I did a bit of a walk around the instance. I ended up killing my second boss for this run and nothing that great to report back. That would soon be a pattern I’d be repeating over and over again.

Five minutes later boom 500 points gained. On a lot of these long grinds you just need something to keep you going. I would usually fall into what I call my zombie stage of not thinking that much about what I’m doing anymore. As I would aimlessly keep grinding away at the task at hand. Only being shaken out of such a state when something like this occurs before I would fall back into it again 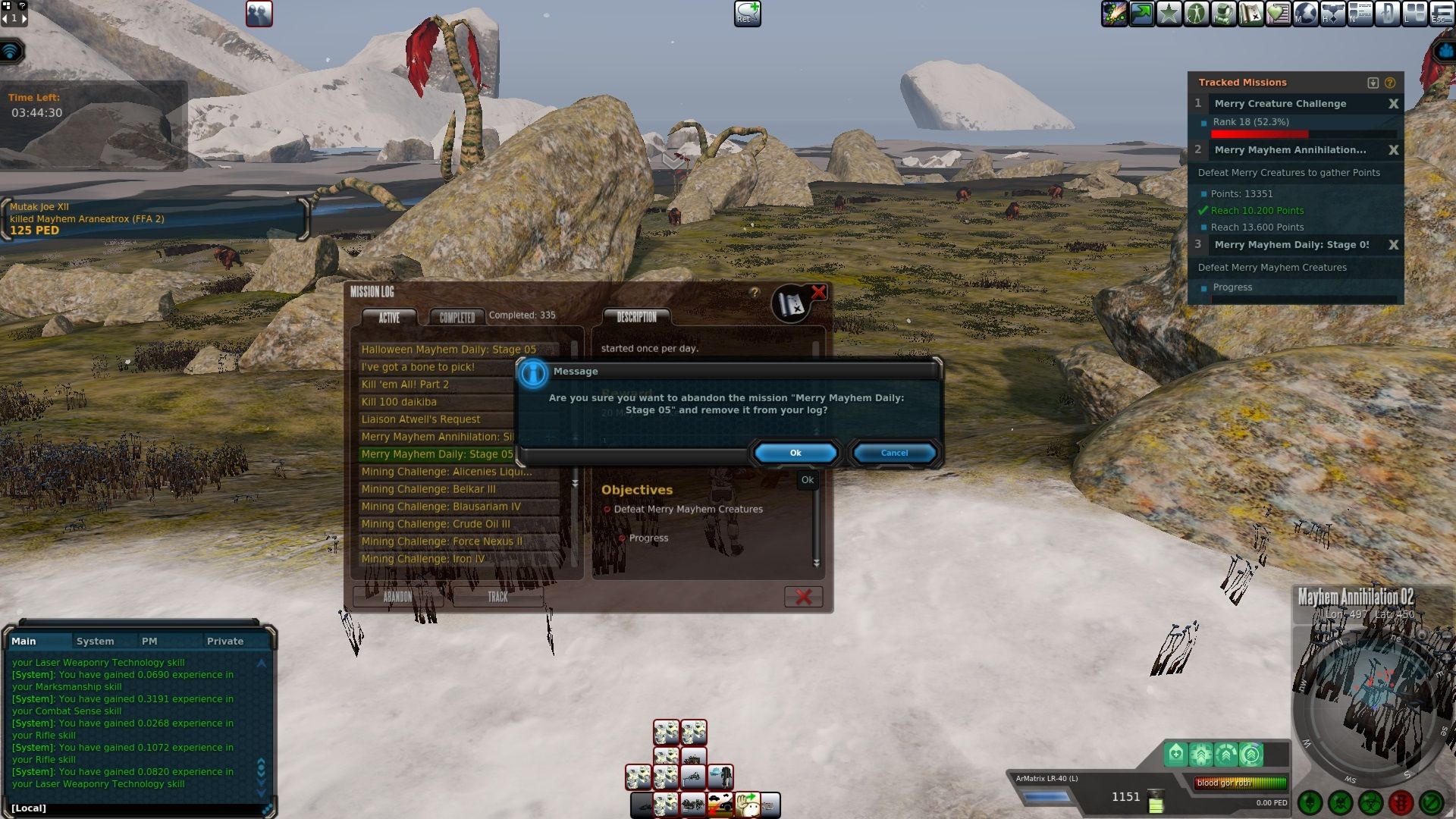 This is a good thing it did. As around 10 minutes later I needed to choose between dropping my current Daily Merry Mayhem mission or not. I had fallen somewhat behind and at my best guess; I would get another one if I did.

This however required that I drop the mission, leave the instance, and re-enter into a fresh instance to get the mission if I had one waiting for me for the day. Before doing so, however, I stuck around for the next boss kill. 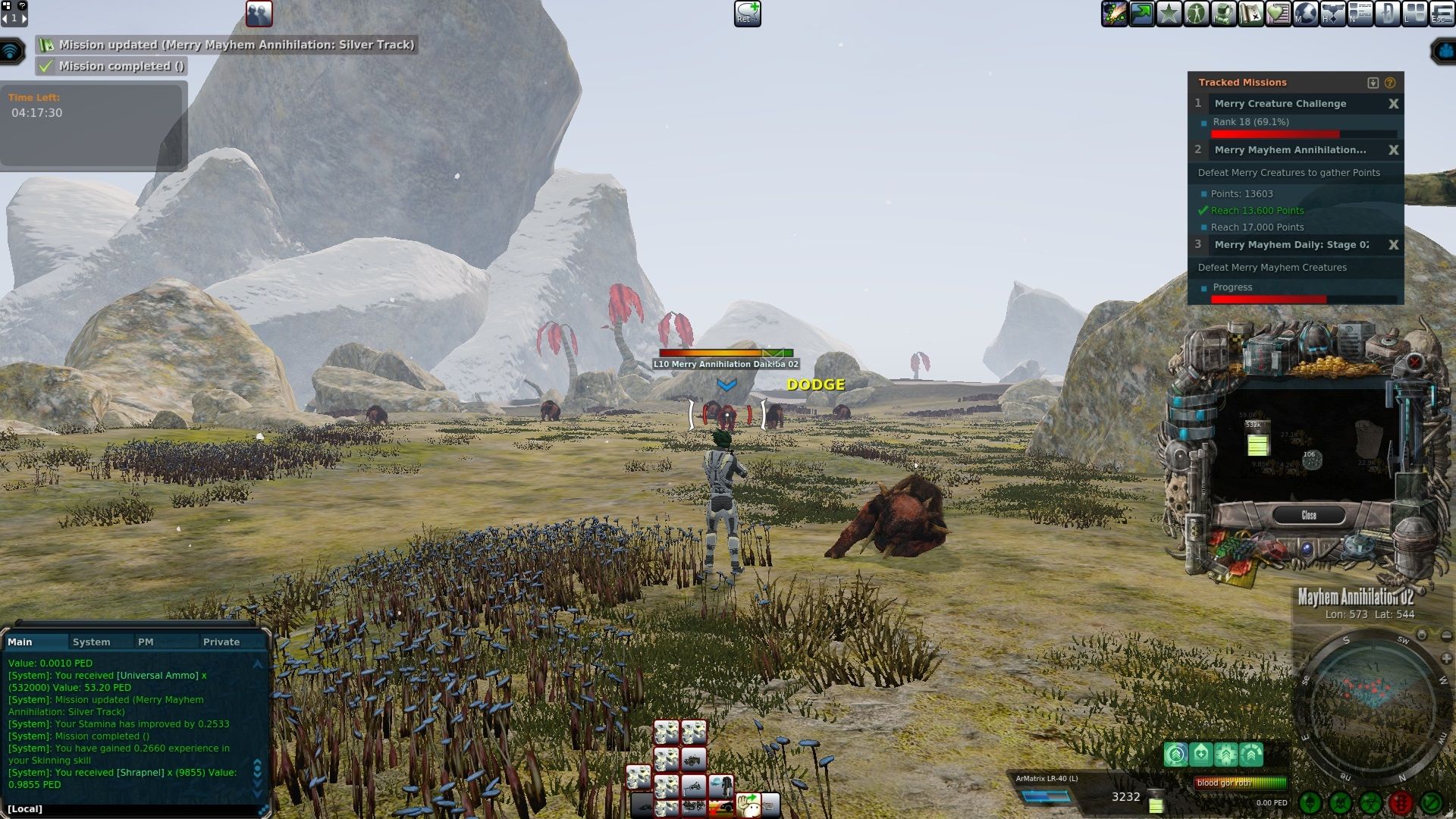 Not even an hour into the next instance I had finished off Silver stage 4 of the Merry Mayhem Annihilation mission. I was rewarded with 53.2 PED of Universal Ammo, 106 Mayhem Tokens, and a sweet .3 PED of the Stamina stat.

This also meant I was now 40% done with achieving one of the many goals I have set forth for myself during this event.

Shortly after that, I was already on stage 3 of the daily mission. Picking myself up 6 further Mayhem Tokens in total. Between all the missions that reward Mayhem Tokens, they appear to be my major source of them.

I also had the usual random progression increases with all the skill gains I would get. Most times I would not take note of most of them. This time around I thought it was interesting I was up to level 16 of Robot Looter. I finally then got my first global of this hunting session. While it was only 74 PED and I was quite in the red at this point. That give me a little hope that perhaps I was about to get a couple more. 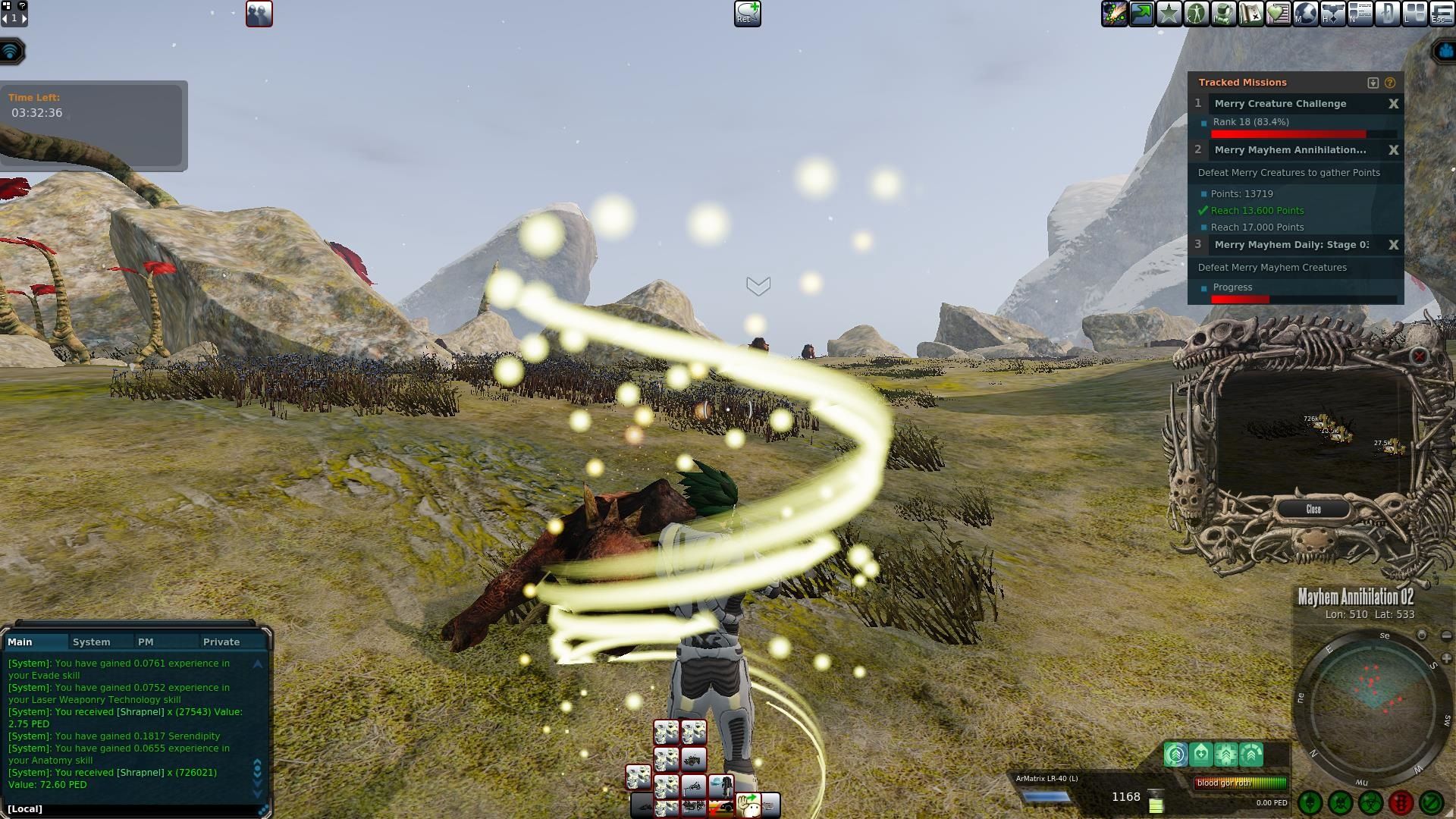 Sure enough about twenty minutes later as I was clearing out the spawn the best I could I got another global. This time for 72 PED.

A lot of times if you happen to find two globals while hunting you just might be getting a third one. So was I surprised when I scored yet another 500-point kill. I for sure thought that was going to be it and the rest of the run would be a bit boring. 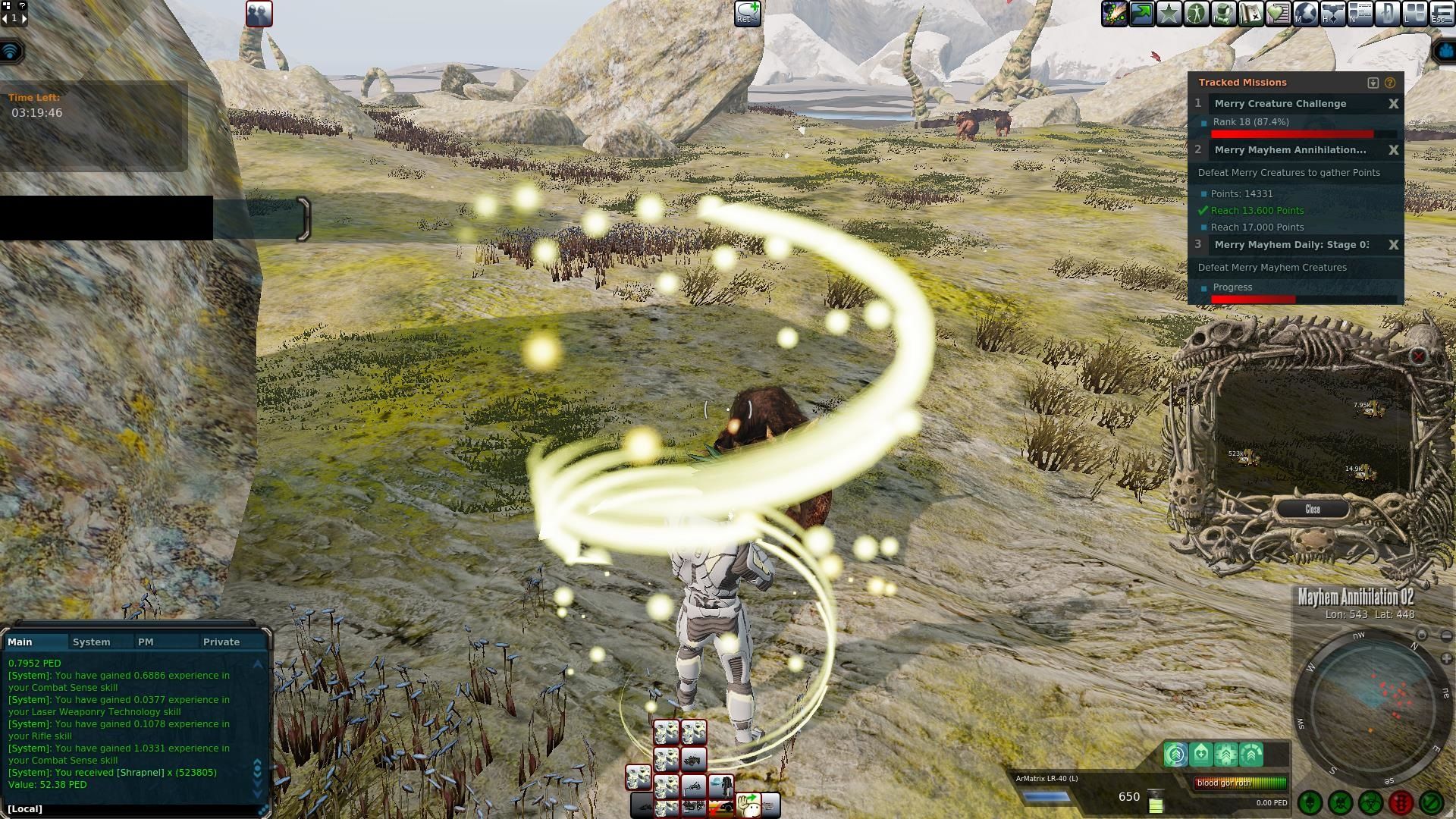 Sure enough, since this pack of creatures seemed to be hitting I got a 52 PED global just moments later. At this point, many people might get the bright idea to take a break or go get another instance. I on the other hand decided to stick around.

I ended up finishing off rank 18 of the Merry Creatures codex. The perception was my best choice for the reward and I gained a few levels of it for selecting it. 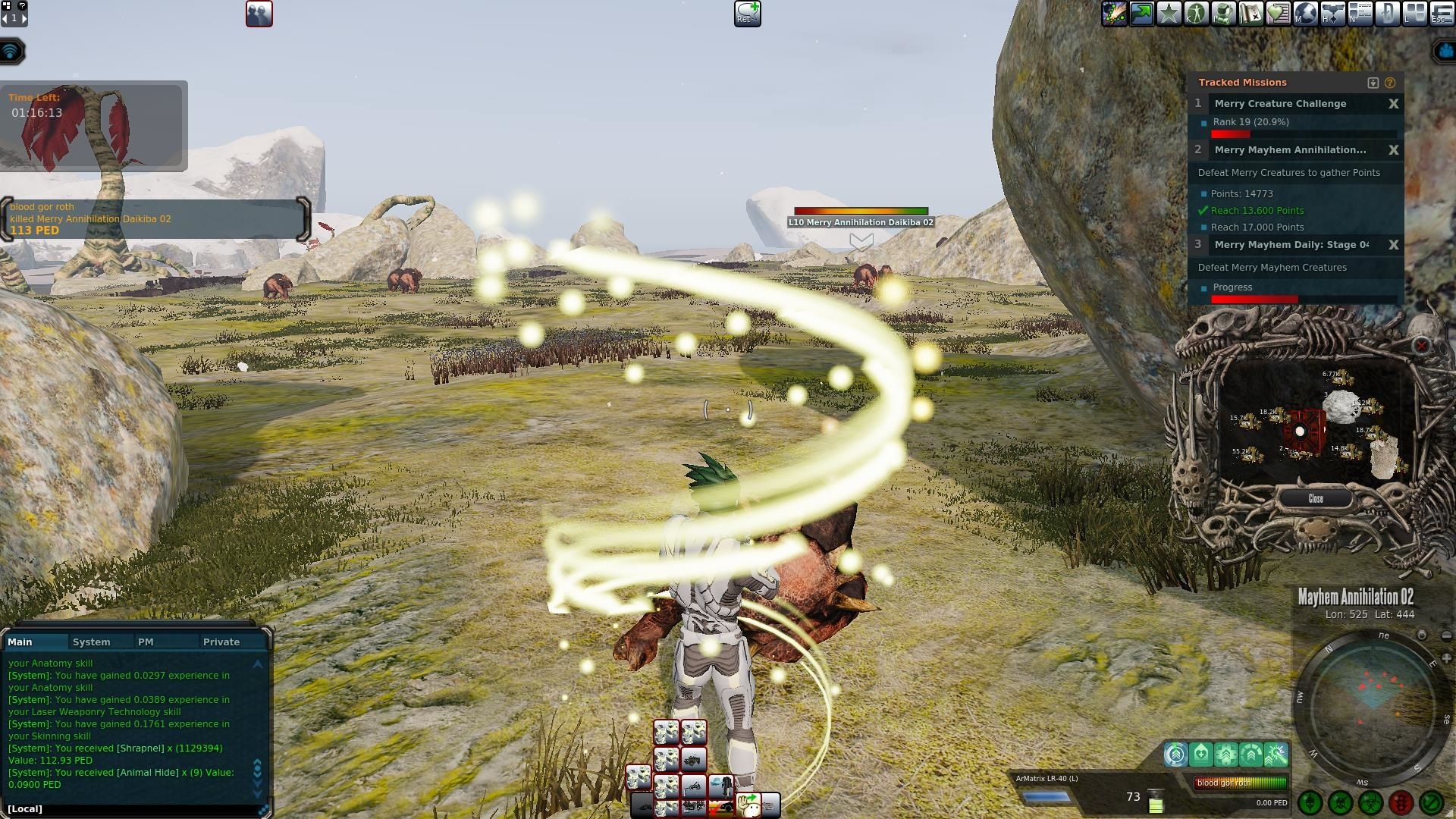 That is not where the fun ended either. It had been over an hour before my next set of globals came rolling in. I ended up getting a 69, 113, and 62 PED within a short period. There were also a couple of 20-40 PED looters.

The last hour of the instance went back to being nothing that exciting. I decided it was time to call it a day. I needed some sleep after all the excitement. Not a bad day scoring two 500-point kills and 6 globals during a 10-hour or so hunting session. The fun was not about to stop here either. My next session was even more fun.