Not having much luck in Atlas Haven I decided it was time to switch over to Ashi. Ashi since the start of the event has had the majority of players who are hunting Argonaut Elite judging by the number of globals. The place was quite crowded. 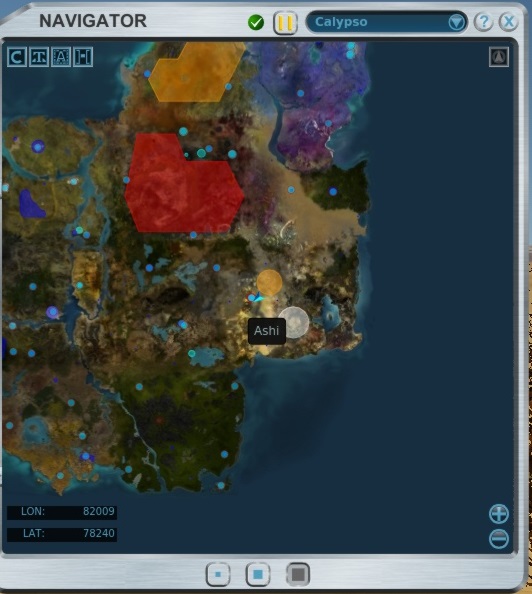 Once I arrived at Ashi I flew around a bit to get the lay of the land. It had a quite dense population of Argonaut. There was a lot less empty space here void of anything which might be why so many players were attracted to the location.

Respawns here also seems to be quite quick. They did mention at the start of the event they would be monitoring things and reducing how long Argonaut takes to respawn if needed. I would have to be even more careful than I was the day before as you only needed to wait a short amount of time once you clear a few out to get a full respawn on you.

Despite how heavily packed this place was in certain parts. As you can see by the radar and the number of green dots rather close by. I did end up finding a spot that was mostly clear of other players. The people across from me could not clear deep enough into the spawn for me to have concerns about having to wait long for respawns. 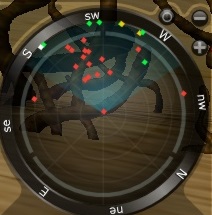 To the southeast and northwest of me were some higher-level Argonauts that were beyond the elite levels. I have no doubt they would not only one-shot me but anyone else who was just coming to hunt the elite in this pack.

The good news is there was enough space between the higher level Argonaut that I could tag creatures in the pile and pull the lower level ones out to myself without any risk of getting aggression on them.

Even better anytime someone thought of landing rather close to me to hunt. They soon realized that was a mistake as they noticed the higher level Argonauts as well on either side of me. This did however mean I had to keep an eye out for players landing near me and pulling them ever so slightly closer before they would fly off in a hurry. 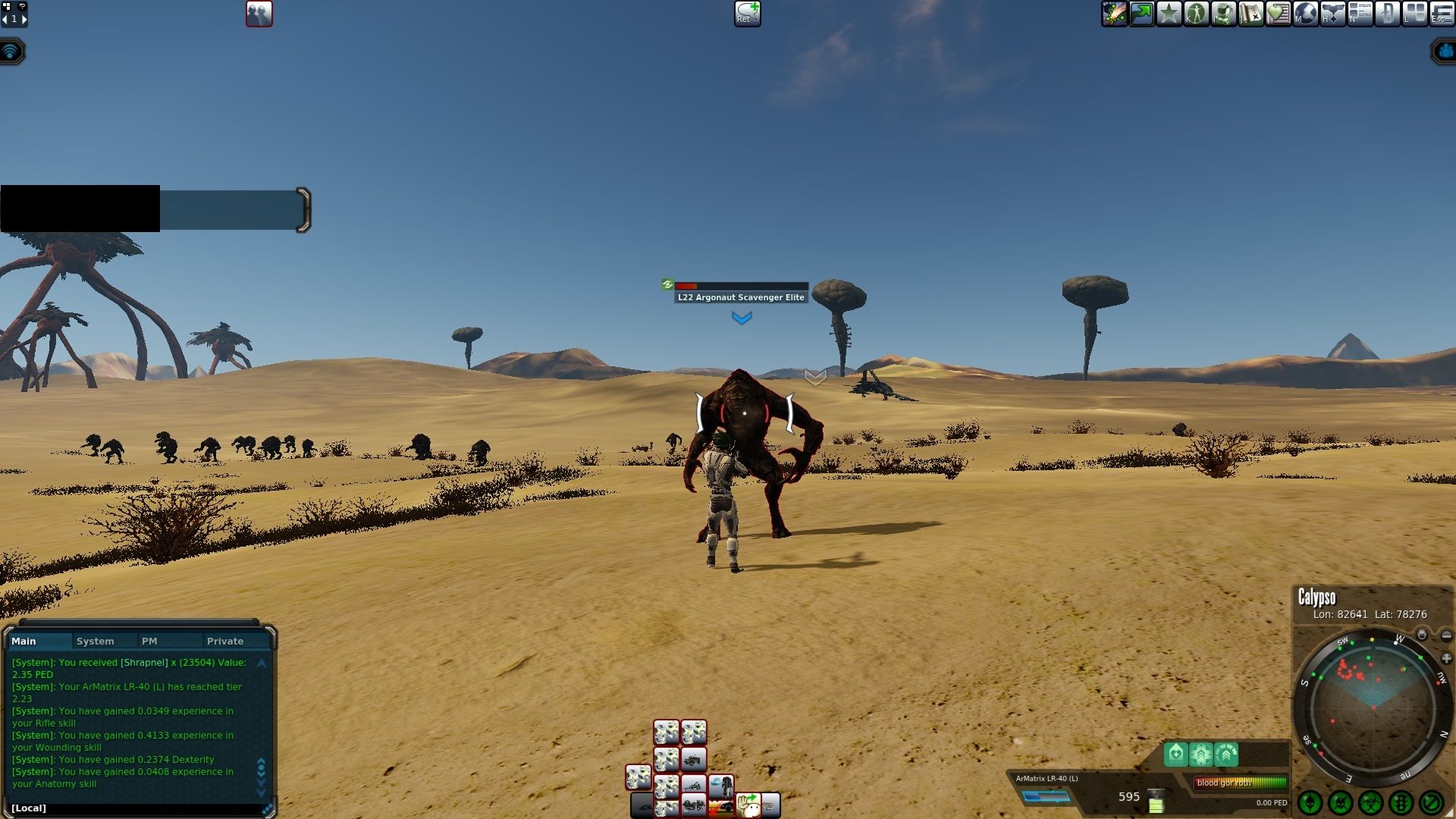 While the level 22 Argonaut Scavenger Elite was a tad lower in level than I was looking for. You really could not beat how crewed this place my little patch of it. I would also be killing a lot more of them with the amount of ammo I had brought where I was hoping I’d get at least a global or something.

One of the huge benefits of hunting in an area this crawling with players is there was hardly any Argonaut left sanding after a short amount of time. This I was hoping would cycle through their loot quickly moving it around through the fields of creatures. 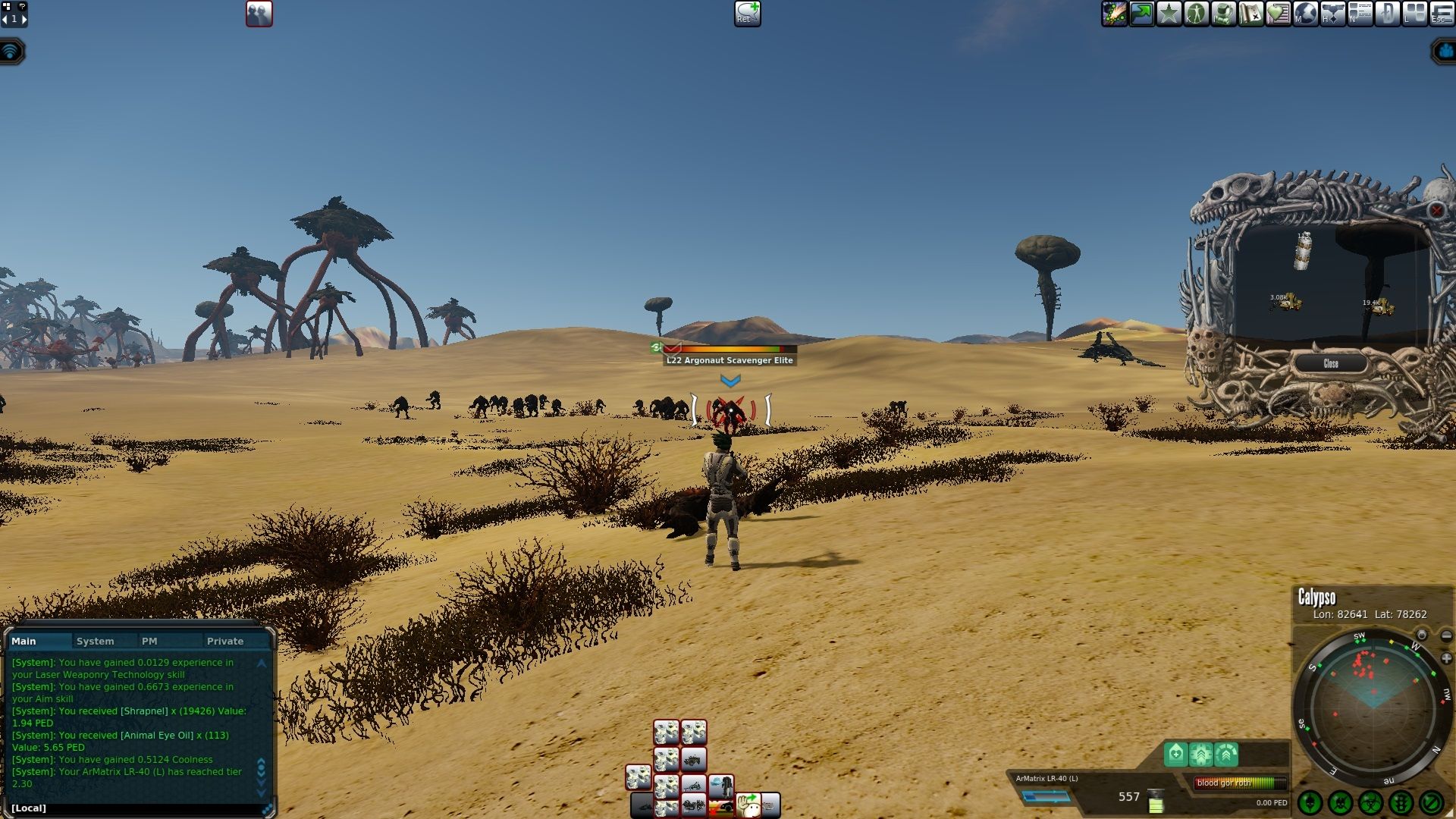 For a short, the pack of Argonaut I was pulling from was giving me 5 to 6+ PED a kill. Being a bit higher than what I was usually getting. If I had gotten enough of those kills I would have come out slightly ahead for this hunt but after some time it went back to being normal loot again.

While some massive loots were getting found by players from Argonaut. I also noticed a large number of players were running around hitting up a lot of high-health creatures. Some massive globals even some almost bigger than anything found in the past day from the event were getting looted.

I finished off my hunt on Argonaut and went to see how I was doing. I was down 15% or so after all my costs were included. While I did decide to restock on ammo and go out to do more hunting. Argonaut was no longer my target. 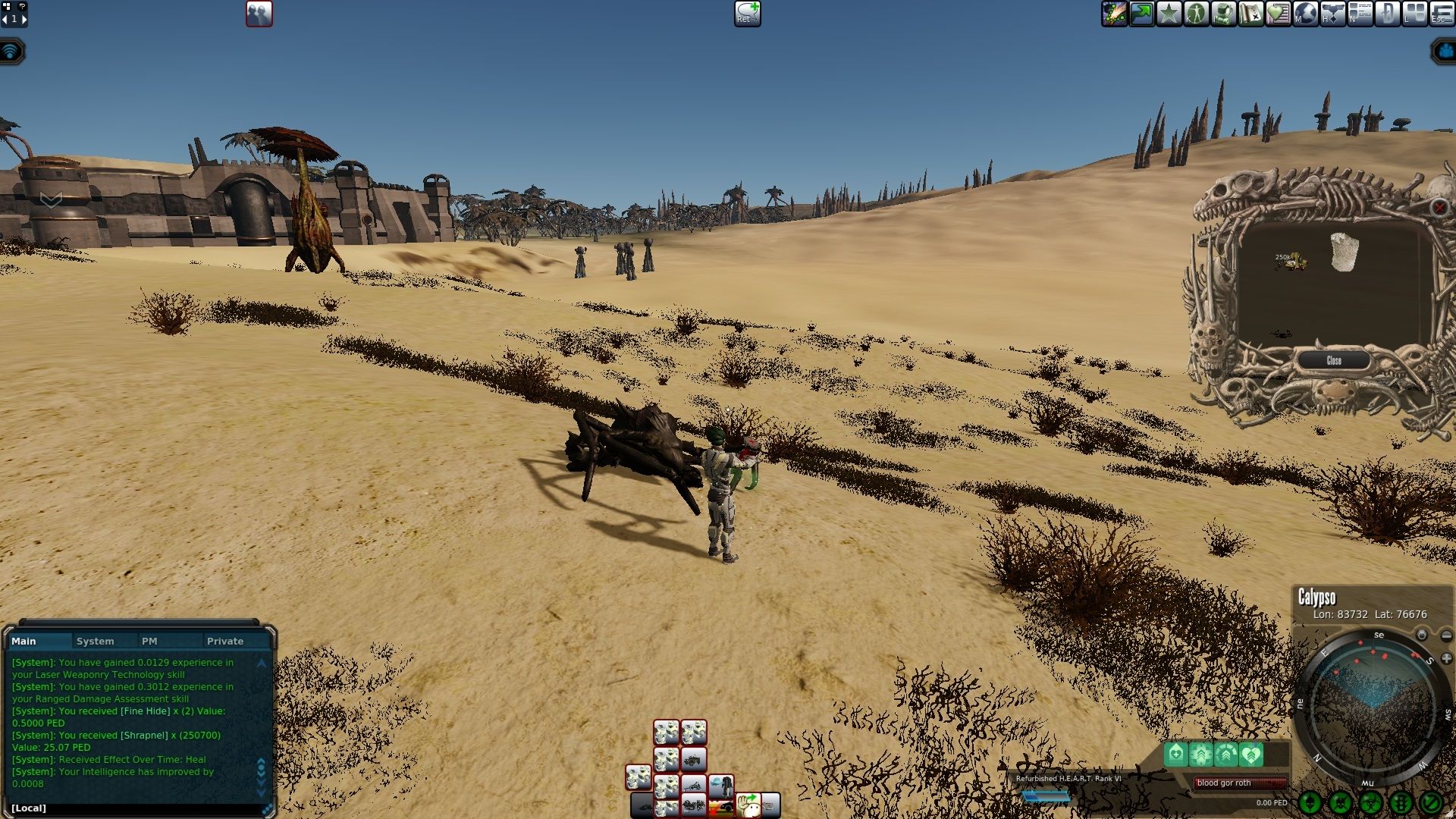 Not that far away from Ashi is a spot I love for Araneatrox. They were so close I always use to Ashi teleporter to get to them. There was still a bit of flying down to them to the southeast. I was shocked to find the place was entry empty.

I double-checked some data points I could find on globals and hofs regarding quite a few different creatures. Araneatrox had not put out anything insane in a short while now. So I thought why not give them a try? Everyone else was running around getting some massive loot on other higher-end creatures.

While I had some decent mini hits nothing that great was found. This ended up being yet another losing hunt. At least those loots I did find ended up keeping this from being a 50% loss. It ended up being a bit less of a loss than the Argonaut run.

At this point, I decided to call it early for myself regarding the Thanksgiving Mini Mayhem event. I was not looting that many Mayhem tokens maybe two or three per hunting trip if I was lucky. There was nothing extra and they were not even dropping special event items anyway from the best I could tell.

They had also the other day announced merry Mayhem was going to start on November 30th and it was going to be lasting for well over a month. There suddenly felt no real need to go crazy on the Argonaut event despite wanting to work on codex further with the Christmas event starting in November. 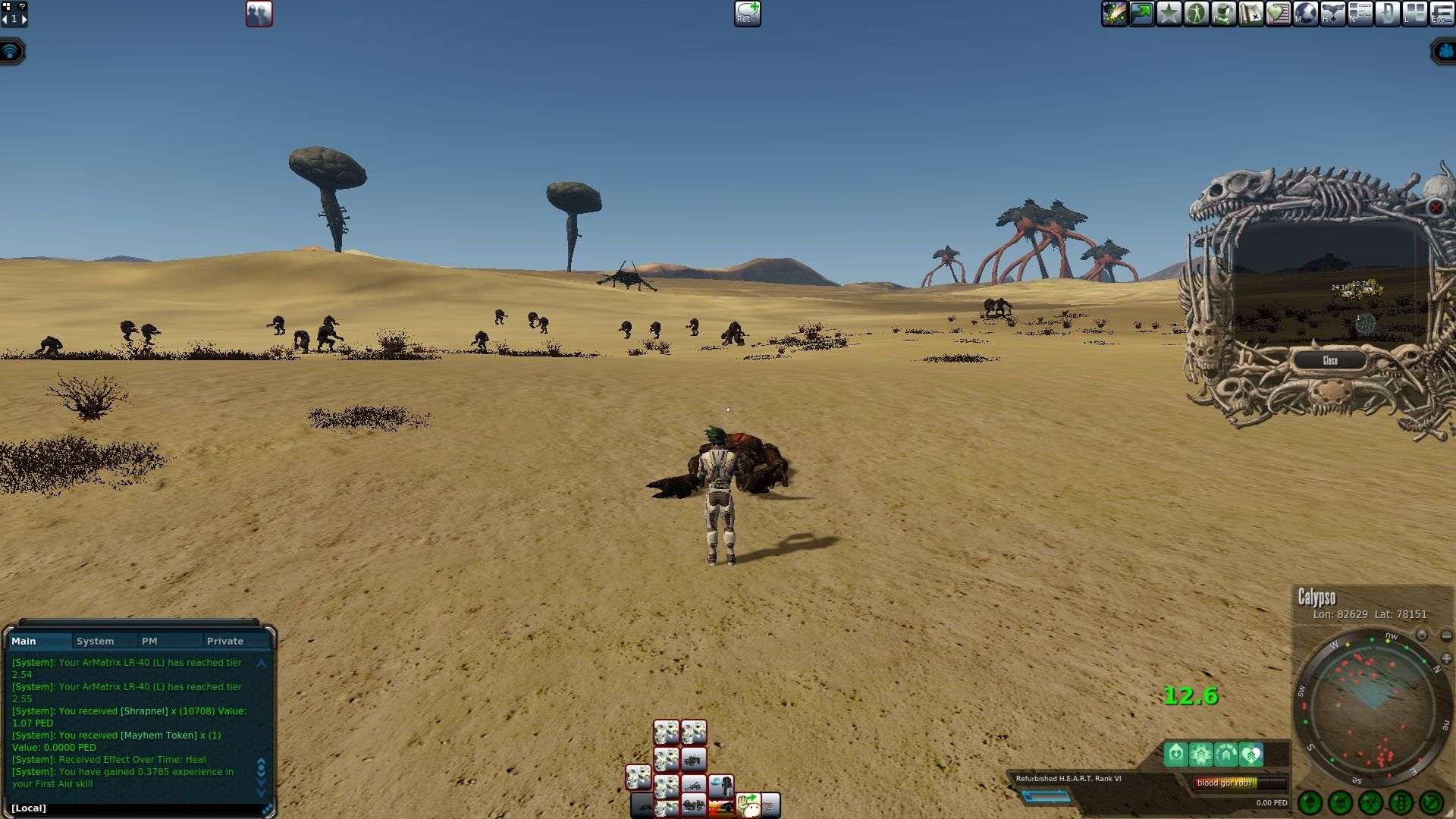 While it was tempting to kill more Argonaut the loot was just not enough to keep me around. These Mini Mayhem events as well don’t seem that great either. While settling on such a half event when I can get the real thing in only a couple of days? It was time to start stocking up supplies for the main event to finish off the year with. I was going big on this one.