Guns and ammo at the ready I flew out to the location I picked to hunt some Elite Argonauts for the Mini Mayhem event. I was not sure how long I’d end up hunting these. So I brought a fair more amount of ammo than I usually do just in case I found a nice spot to camp for a while.

Atlas Haven would be the spot I’d grind in for at least a little while. I first needed to work out how difficult of an Argonaut I could hunt with in my Ghost armor with 5B plating using an Armatrix LR-40 (L) gun with a 37b amplifier. While I suspected an Argonaut Warrior Elite was going to be a bit too much for me. The area I ended up landing in had three different maturity levels of Argonaut rather close to each other. So I thought I’d give it a try. If not I could just move over slightly to a more crowded spot and hunt some lower-level ones.

It was not the health of Warrior Elite that I felt was the major struggle for me. While it was a bit more health than I would have liked. The LR-40 (L) was doing a decent job at shredding the creature's health. The creature however was doing a lot more to me in Ghost armor than I was expecting.

My main in-combat healing device a Vivo T20 healed around 50 health per use which was not quite enough to want to hunt the warrior elite long-term. I had to stop shooting a few times to top off my health.

I also noticed a couple of them were starting to spawn rather close to me as well. Normal Argonauts are quite known for being a bit aggressive. So I started to back away the best I could. Getting more than one of this warrior elite on me would be death for sure. 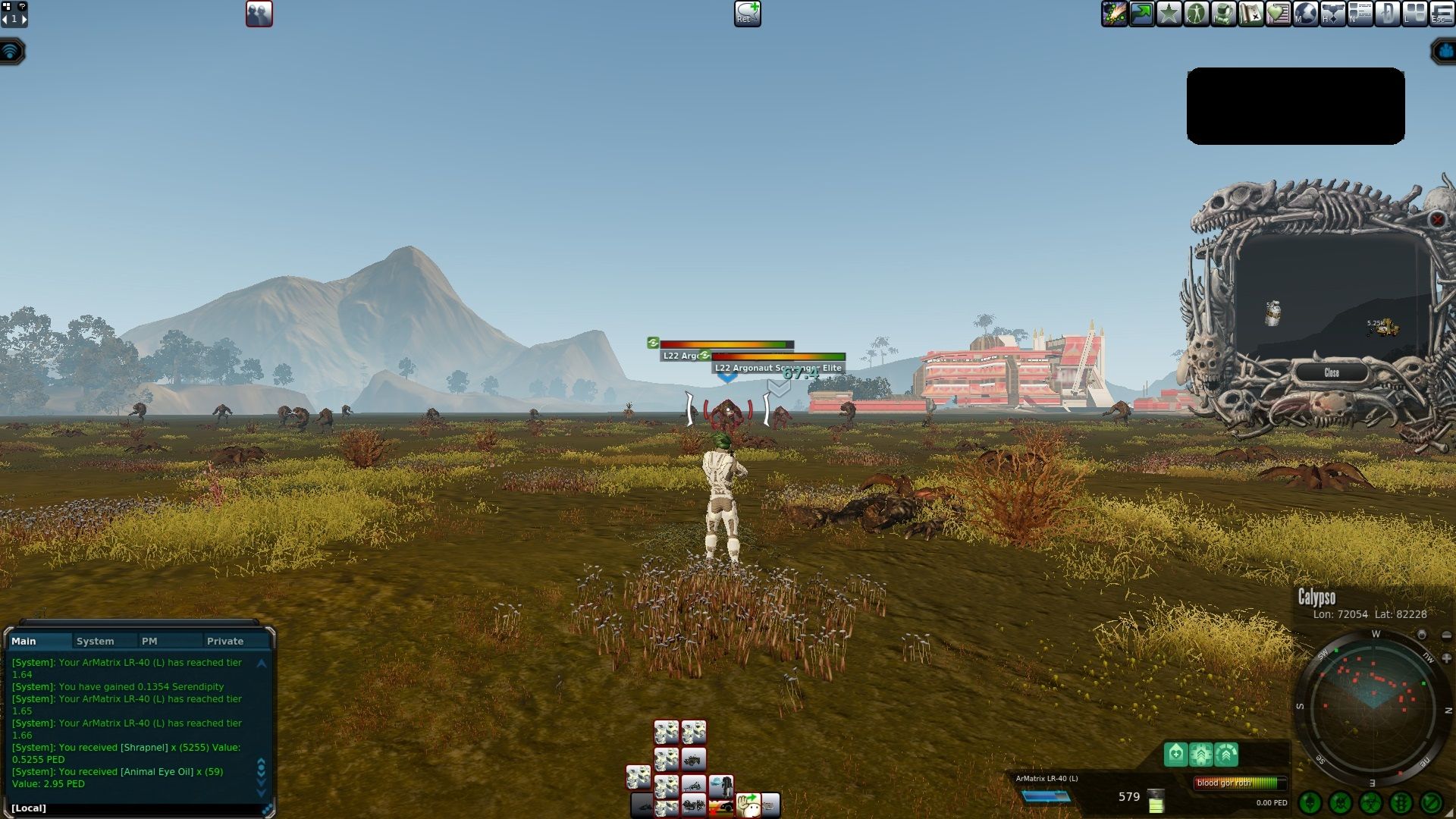 After I managed to kill it I migrated a bit east to hunt something a bit more manageable. There was a somewhat crowded patch of level 22 Scavenger elites I decided to give a try next.

These were far easier to kill. I felt even I was killing them a bit too quickly. As I was having a bit more natural overkill on average than I would have liked. While I did switch to a lower-level gun to get some finishing blows in.

I was not that thrilled early into the AM to be doing much thinking at all. I ended up hunting this patch of Argonaut. That loot was not dreadful but nothing that great either.

At least I did not have to heal much. I could kill a couple at a time before needing to stop to heal. I also did not worry too much if I crept a bit too close to the spawn where I was at risk of getting respawn adds on me.

The only time I did have some trouble with the scavenger Elites is when I had three of them on me at once. Otherwise, I could have hunted these things with my eyes barely open as I was slowly drifting off to sleep. 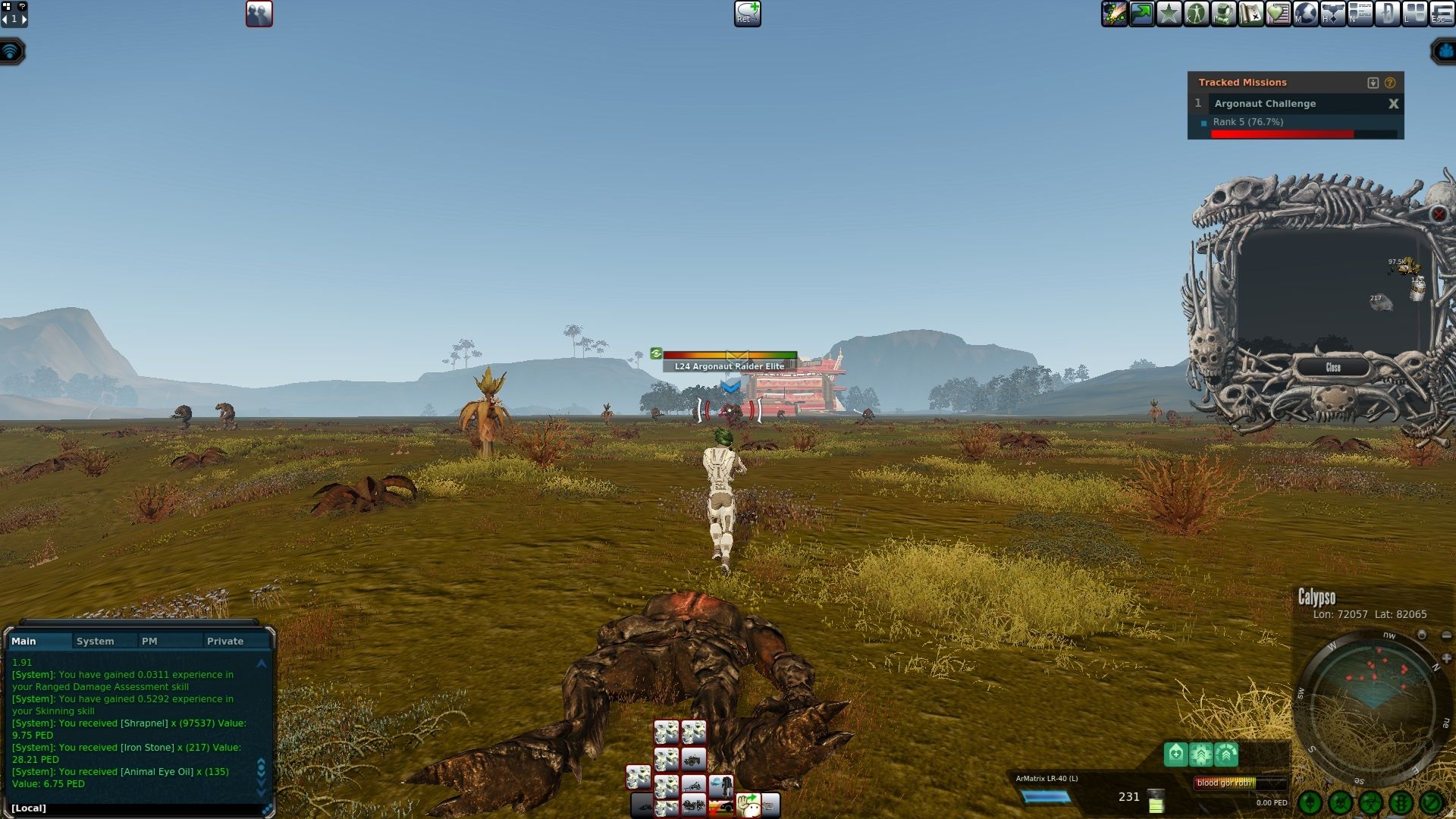 After a while, I decided I wanted something a bit more thrilling to hunt. Thankfully close by was level 24 Raider Elite. The biggest loot of the night I ended up getting was this 44.71 PED. Not a lot of markup either on the kill.

These creatures are a bit different than most. They drop a minable ore called Iron. With this many people hunting Argonaut Iron took a bit of a hit on the market. This stuff has not been worth much for quite some time now. Needless to say, some people who mine were not that thrilled about this event.

I tend to stay away from mining iron as it’s just not worth it. The only time I’ve seen any is if I’ve been after something else in an area and it just so happened to be in the mining lootable.

Back in the day when I did a massive grinding session over many weeks on Argonauts getting iron was not so bad. It used to be worth a bit more and is usually worth more than the other common drops you get off these anyways.

These Raider elites ended up being the perfect level for what I wanted. I ended up coming back to this spot a couple of times. Sadly the loot did not improve much. It was quite clear this spot regardless of how much I liked it was not panning out for me loot-wise. 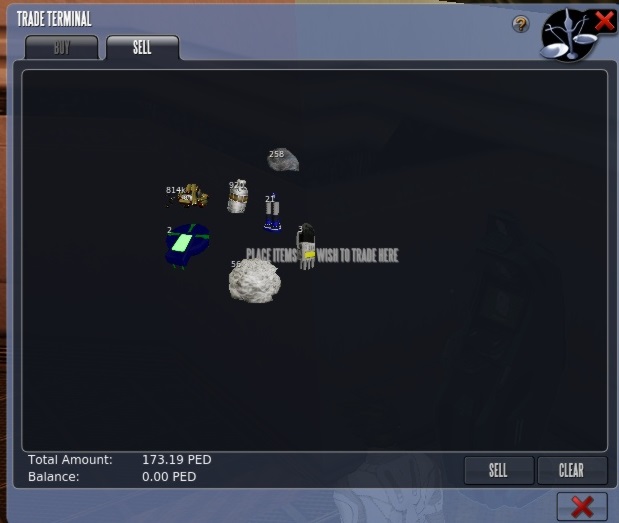 This is about what a 200 PED ammo hunt was yielding here. You also have to take into account that there is gun decay, amp decay, healing decay, and armor decay along with the ammo costs. I was hoping after a few hunts I would at least get a global or something. With how many people are hunting elites some massive loot was getting collected. I was never on the receiving end of any of it.

From what lootable I could find it appears Argonaut can drop some quite insane items. If they still drop and at what minimum maturity they do is not known to me. I just know there are quite a few different guns most of them are nowadays so old they are worthless due to low effiecnty, but, not all of them. Along with some decent armor drops. I would not be seeing any of that nor was I expecting to with how extremely rare they are as a drop. 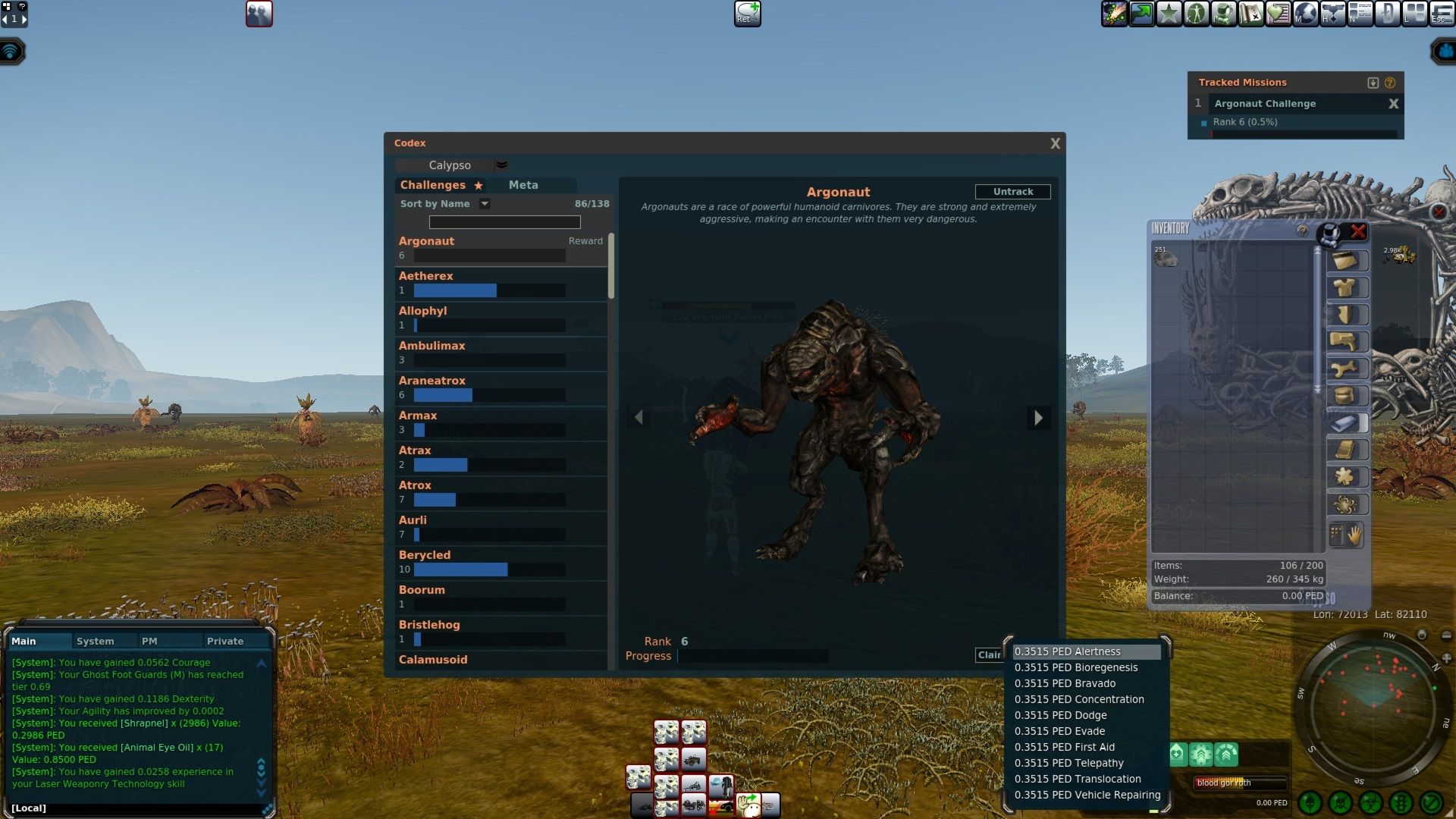 The good news at least I got a few ranks on my Argonaut codex. Since I was hunting such a high-level Argonaut the first five levels flew by quite fast. The rewards were not that bad either skill-wise. I was still going for skills like Alertness, perception 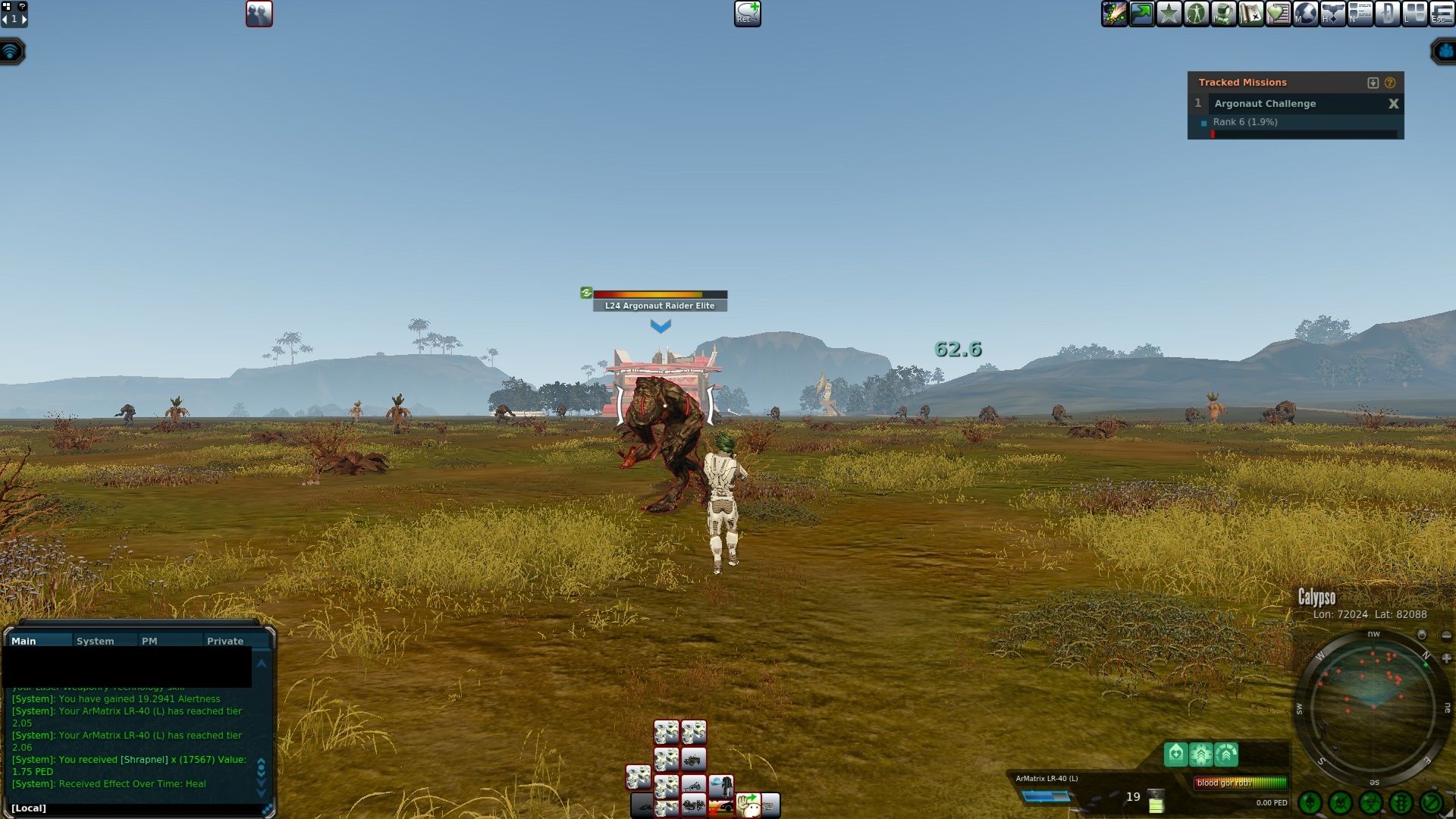 I’ve been quite lucky in some of the past events this year along with some dreadful luck as well. These couple of runs seemed to be middle of the road. Not great but not horrible either. I was planning to grind these out each day till the event ended.

That however is not how it ended up going. More on that in the next post.