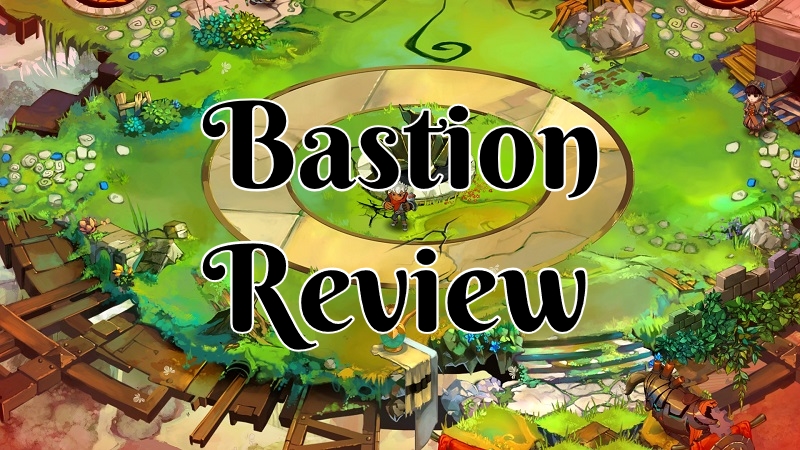 Bastion is an arpg with a strong narration that has aged rather ok with the graphics style used. While some of the mechanics of the game might be simple it was still quite a fun but short adventure to embark on. It also does not follow the more standard arpg style games with the lack of grinding needed to progress forward. 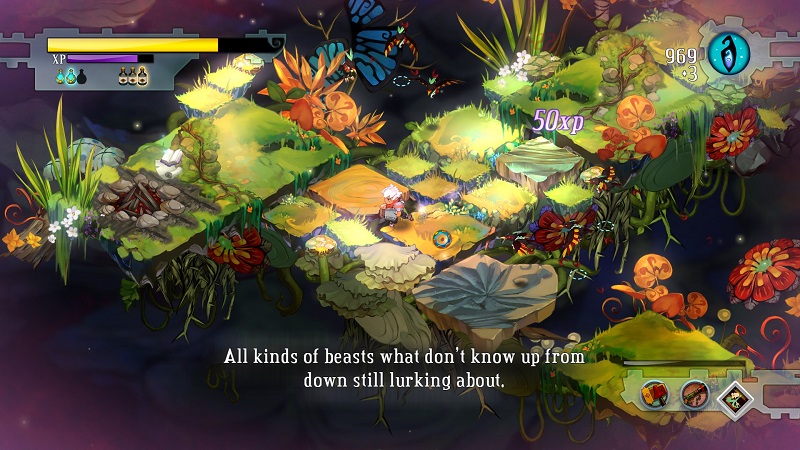 Something you notice right away in this game is the voice that is narrating the story. It is also doing so regarding the actions the player is taking along with the story. You are either going love this or find it rather annoying. While you can just mute the narrator's voice in the options that takes away a big part of what this game brings.

Nowadays we take for granted how often a game has voice overs in it. Even back when this game was made it was starting to be a common thing. Developers back than and even today tend to cut corners by not having everything read or just flat out didn’t have voice-overs once you got a couple of hours into the game. That was not something I experienced. It was just not very deep.

Unless I have missed it there is a single voice only. For me, I didn’t mind it being that way as it was like having the same person there for the entire adventure I went on in this game. It also had enough personality to it that I did not get bored right away from hearing this person either.

What did get a bit repetitive is the narrator's voice also triggers based on your own actions in-game. Maybe you fell off the edge, got killed, or kept using the same weapon over and over. As things are happening to your character you are being told as such. It is understandable there is only going to be so many lines that the voice actor would have recorded. It’s not like more modern-day titles where an “AI” can take an actor's voice pattern and spit out an externally large scale of responses. 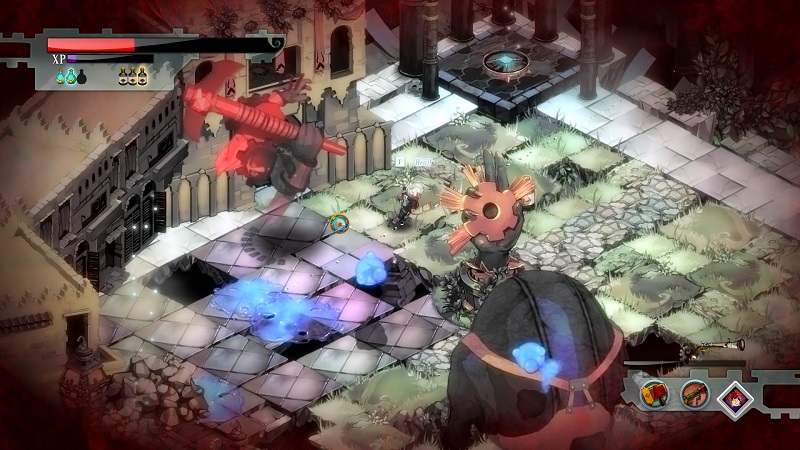 There is some stuff I really enjoy about the graphics style used in Bastion. There was also sadly an emersion breaking annoyance that almost killed the game for me until I got it to go away. It is an older game so some it was not shocking running into some quarks. 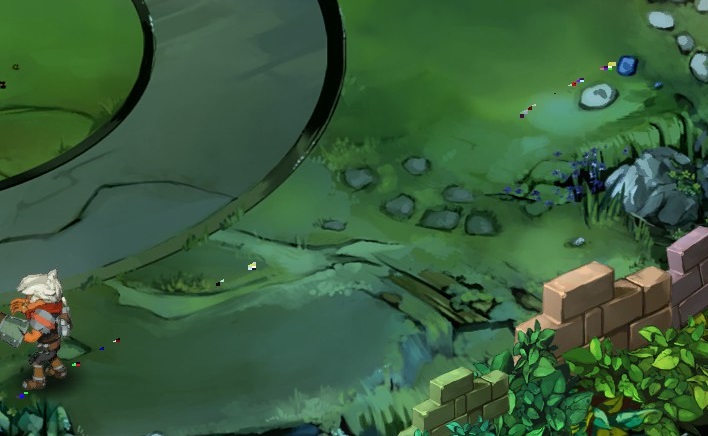 The elephant in the room when it comes to the age of this game is this rather annoying line of color that appears almost at random as some would call it screen tearing. At first, you think maybe this is just a part of the game. Sadly with the way it follows the center of the screen and many times do not even show up. I’m thinking this graphics glitch is unintended.

Vsync was also already on by default. Turning it off caused the more standard screen tearing that I’m used to seeing. The solution I ended up discovering myself was turning this option off and again every time I started up the game once the issue appeared.

I wish I had discovered this fix before putting a couple of hours into this game. At one point I was just looking to play it to see if the game had enough redeemable quality about it to overcome this rather annoying graphics glitch that was going on. I even check for graphics card updates and other troubleshooting measures.

Thankfully I appear to be in the minority the best I could tell for having this kind of issue. I also was able to find a solution on my own. With the age of this game, you can run into issues like these and you can’t expect them to be patched or fixed. The last patch for this game appears to be back in 2018 with only two that year according to their post on Steam 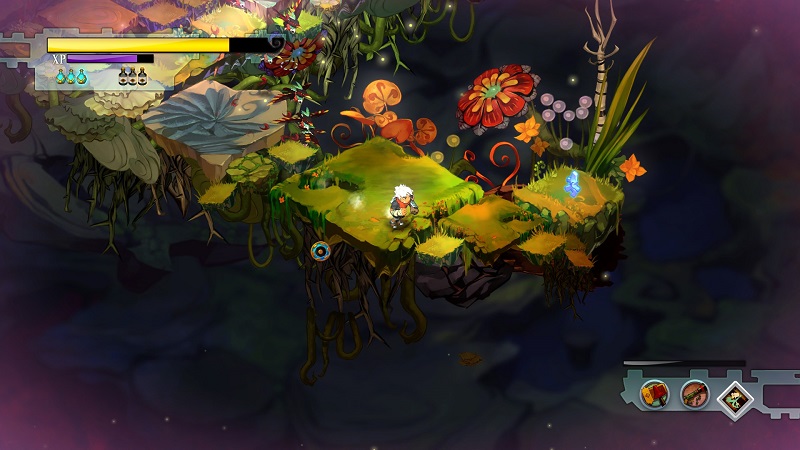 With that out of the way, the game graphics are a play on the games name Bastion. As you move around in this game your path is literally projected outward around you. You get to see rocks and other structures come out of nowhere and move into place. Which how fast it is I could not get a good screenshot of it happening.

This also adds a rather fun element in the game when it came to getting ambushed. Along with you not quite sure what you are getting into until you have moved forward enough for the game to place things around you like turrets, walls, or a path to run down. It seemed like a fun way to add a surprise element to the game without making it feel cheap. 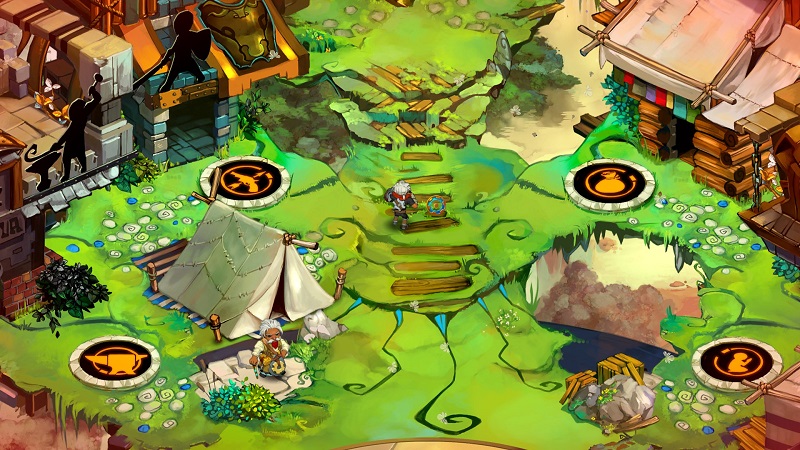 A large amount of this game and storyline is based around your town of Bastion. You end up building up this area and it gives the player a reason for going off into the world. It is also where you tend to make upgrades, hear about lore, switch weapons, and engage with NPCs.

The game is a bit simple in the fact you don’t need to do a lot to unlock or get an update. For instance to upgrade your weapon you just need to loot or buy, or earn the right piece of material and have some money for the upgrade. The game is also not very heavy into grinding since you can’t repeat missions you have already beaten. So issues like missing a hidden drop are solved by just buying it in the shop once you update your Bastion far enough.

When you level up you get to pick a new attribute like gain more damage when low health. Along with damage, speed increase, or other aspects under the right conditions for your character to gain while out on a mission. It does allow you to make your character stronger but not in a way where you feel you need to be a higher level just to progress forward in the game. 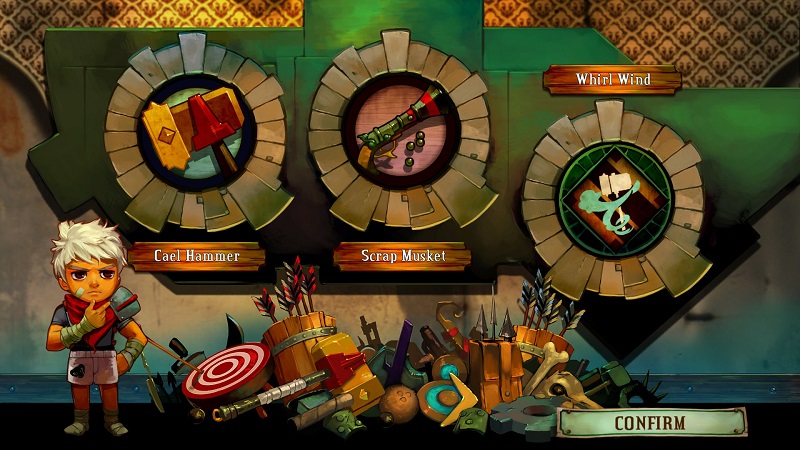 If the player wants to make any changes to their weapon loadout or anything else of that nature there is a building for that in your town. Sometimes it’s just nice to play a game where you based on operations are out of the same place every time. Other times you might be looking for something deeper. 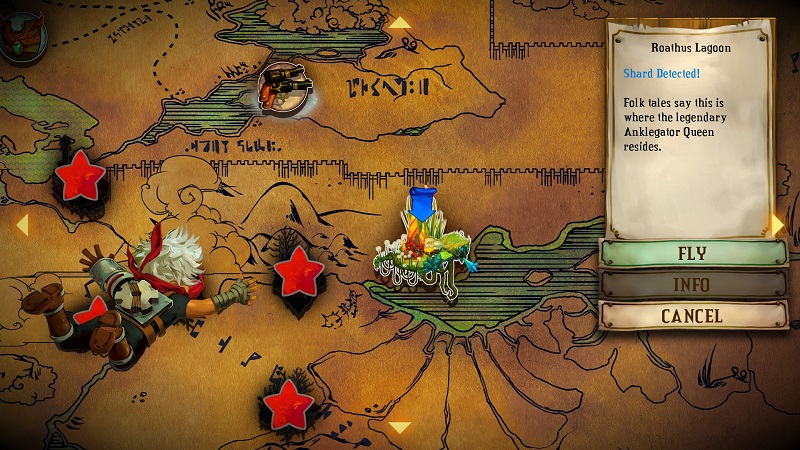 Once you leave your town using the Skyway the game puts you in this fun overview of the map where your character is flying around. From there you usually have a couple of options on where to adventure to next. You also need to explore each of these islands decently since once you complete it there is no going back.

A lot of the time the game is having you go out onto the map for the same reason. A shard or a core has been detected and guess what? You need that for your town. While each mission was not as repetitive as the task at hand. It did get boring after a while as any plot twist was involving the same old same old.

The redeeming quality that sets this ARPG apart from many others is the lack of grinding required to move forward. If you missed something while out on a mission or didn’t clear every monster that is perfectly fine. 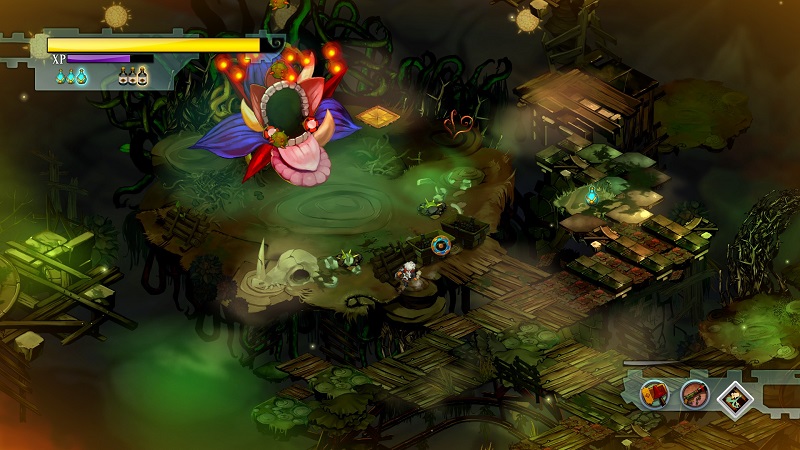 This game does have some nice big bosses to kill at the end of many of the missions. Sometimes it can be a creature you were tracking from the very start. Other times the game tries to act like you just stumbled on a boss and now you need to fight it. While most times it’s guarding the shard or core or whatever else you need so you can go home back to your town and progress forward. 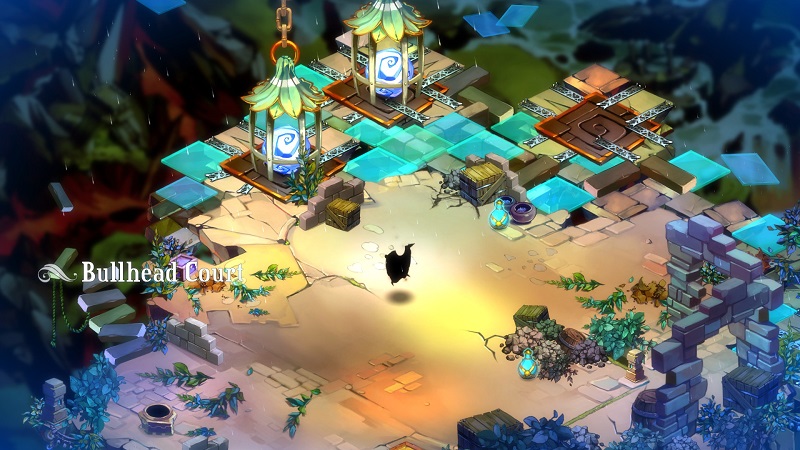 Really the only grind part of this game is doing proving grounds for materials to upgrade whatever type of weapon you end up using. Even then it more comes down to if you can pass them a couple of times in time or if you become frustrated and need to repeat them again.

In a way, these serve as a way for you to try out and learn the proper way to use the different weapons and other items in the game. Since you need to use them correctly if you want to compete them in time or achieve any other r measure of success they might have.

They tend to offer you three levels of rewards. With the first one being easy enough even if you have bad form or really don’t have a good grasp of using an item you can earn. From there it does get harder and can even require you to upgrade your weapon to be able to reach the next limit.

One example of a proving ground is the one for your shield. Where you not only need to avoid taking any damage what so ever by either using it to block or evade on your own. Your shield is, in fact, your weapon that you need to use to destroy all the targets. Otherwise, the next wave of monsters does not spawn.

While I do feel some of these proving grounds could have been shorter to be more in-line with the rest of the game. They tended to be the place where you had to teach yourself the proper way to use weapons and the shield. Like the creatures, you fought were tuned for you using that weapon. 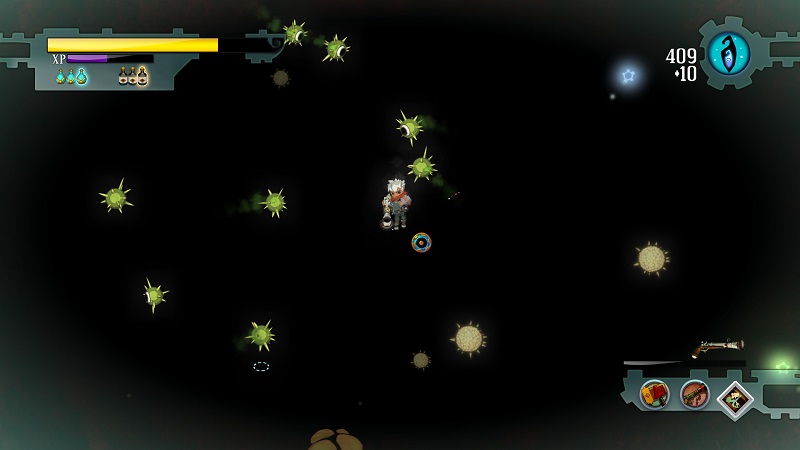 With the lack of grinding in this game, it can be rather short. If you get ten hours of play out of it that would be considered decent for how quick paced it was. The nice thing about older games is they come as more polished since they have had the time to be so. The downside is any annoying bugs or old way of doing things that have remained are going be there to stay.

Screenshots were taken and content was written by @Enjar about the game Bastion.