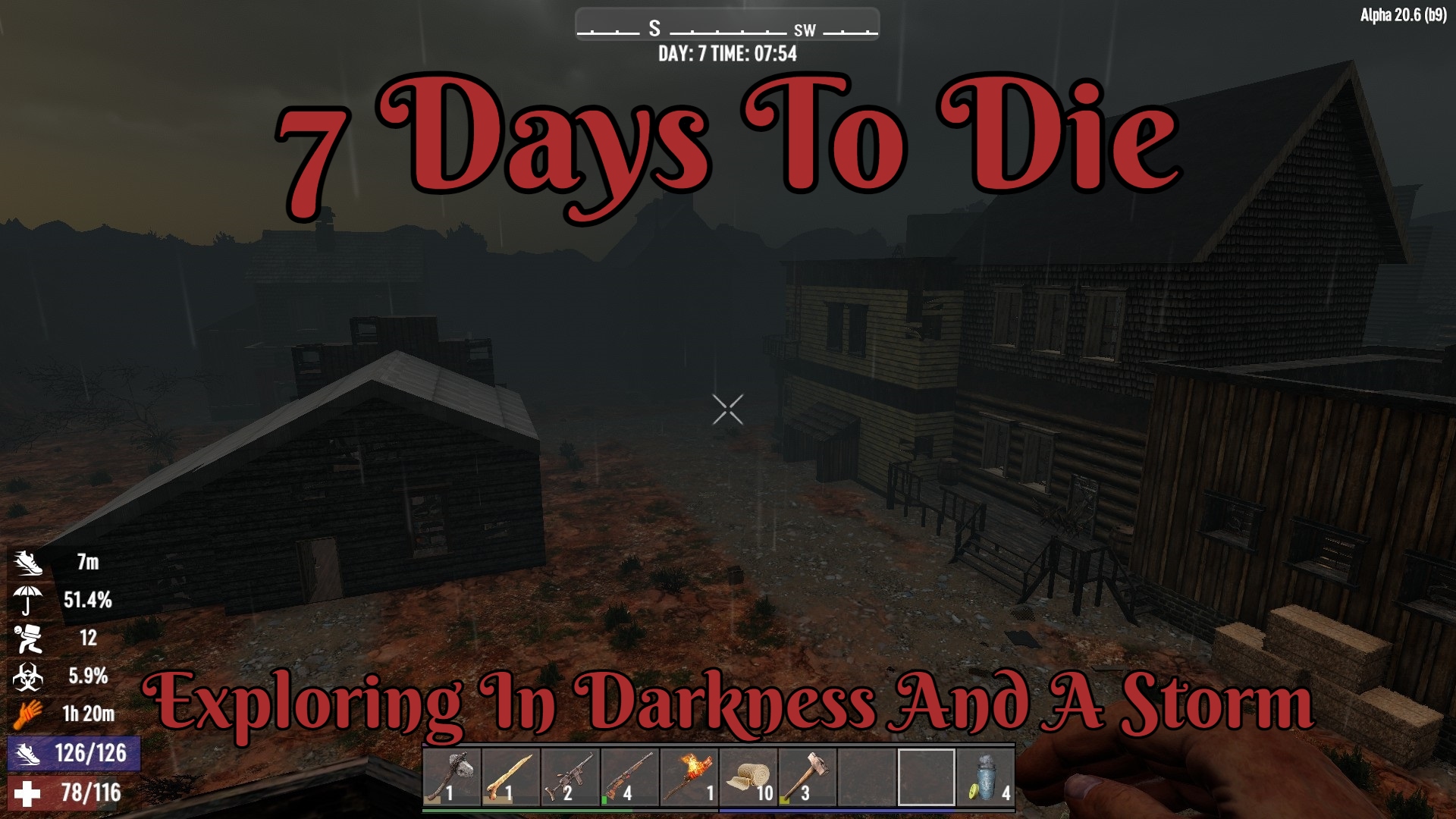 With supplies getting low I took desperate action. I went exploring during the night time. This ended up getting further complicated when a nasty storm rolled in around daybreak causing me even further issues.

With almost both of my guns broken and not having much of a chance to stock up at the new place, I’m calling home. I knew before the blood moon I would need to venture out and try to gather some further supplies. This meant taking a risk and having a part in this adventure during the nighttime.

There are still some critical things I need to move forward. Either a lot more experience or finding the right schematics so I can unlock a workbench and some other things. I also in general needed more raw materials in part to beef up my defenses for the upcoming blood moon. 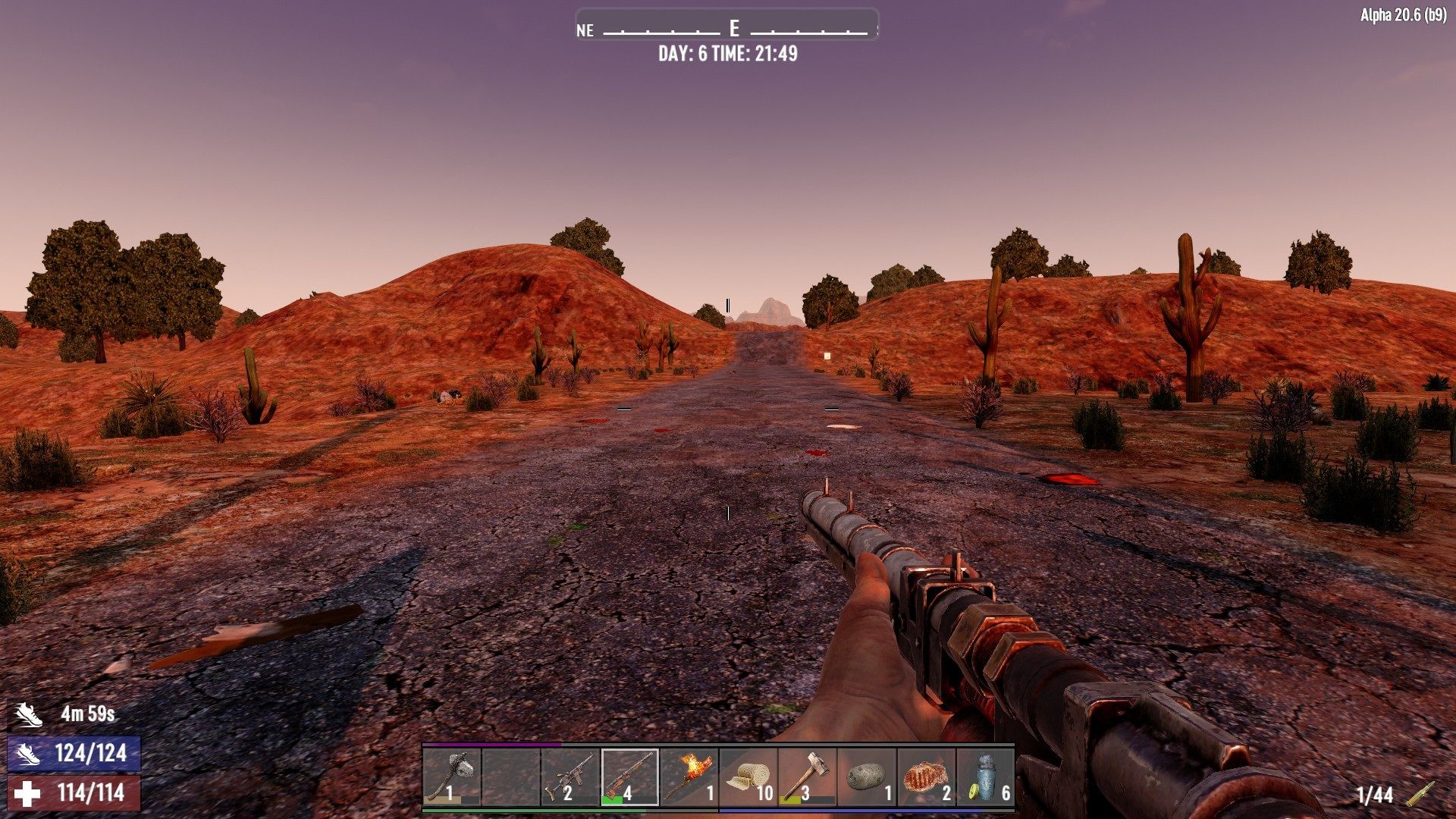 In the area, I’m now in I have not explored a lot. There should be some buildings not that far away I just need to discover them. I can only hope I luck out and find something useful for the reasoners I’m about to expend during a night adventure. The adventure was mostly peaceful till it became fully dark with the moon being the only light I had to help guide my way. It was at that point I started to rack up the kills and gain some of that sweet experience I was looking for.

Little would I know at the time I was about to burn through all of my ammo. Such ammo would have been better suited for the up-and-coming blood moon. Sometimes taking a risk will not pan out and as far as my ammo supplies go this ended up being one of those times. After quite a few zombie kills I can across a small town. It looked promising at first. Many of the buildings had names or looked quite industrial. I had quite high hopes I would find something amazing in one of these buildings.

I also had with me a sledgehammer with about thirty percent of its condition left to use. This would come in handy in breaking down reinforced doors and other areas. That is however not the first issue I had to take care of.

I first had to pay close attention to all the zombies I would attract. Busting down some doors sure makes a lot of sounds. Not as much sound as shooting a few zombies I had to awaken from their slumber. With further brought in even more zombies to my location.

After a fair bit of killing which included some zombie dogs which I hate running into it. It was time to start cracking places wide open. I would still need to be careful as I expected there would be zombies inside these buildings as well waiting for me. 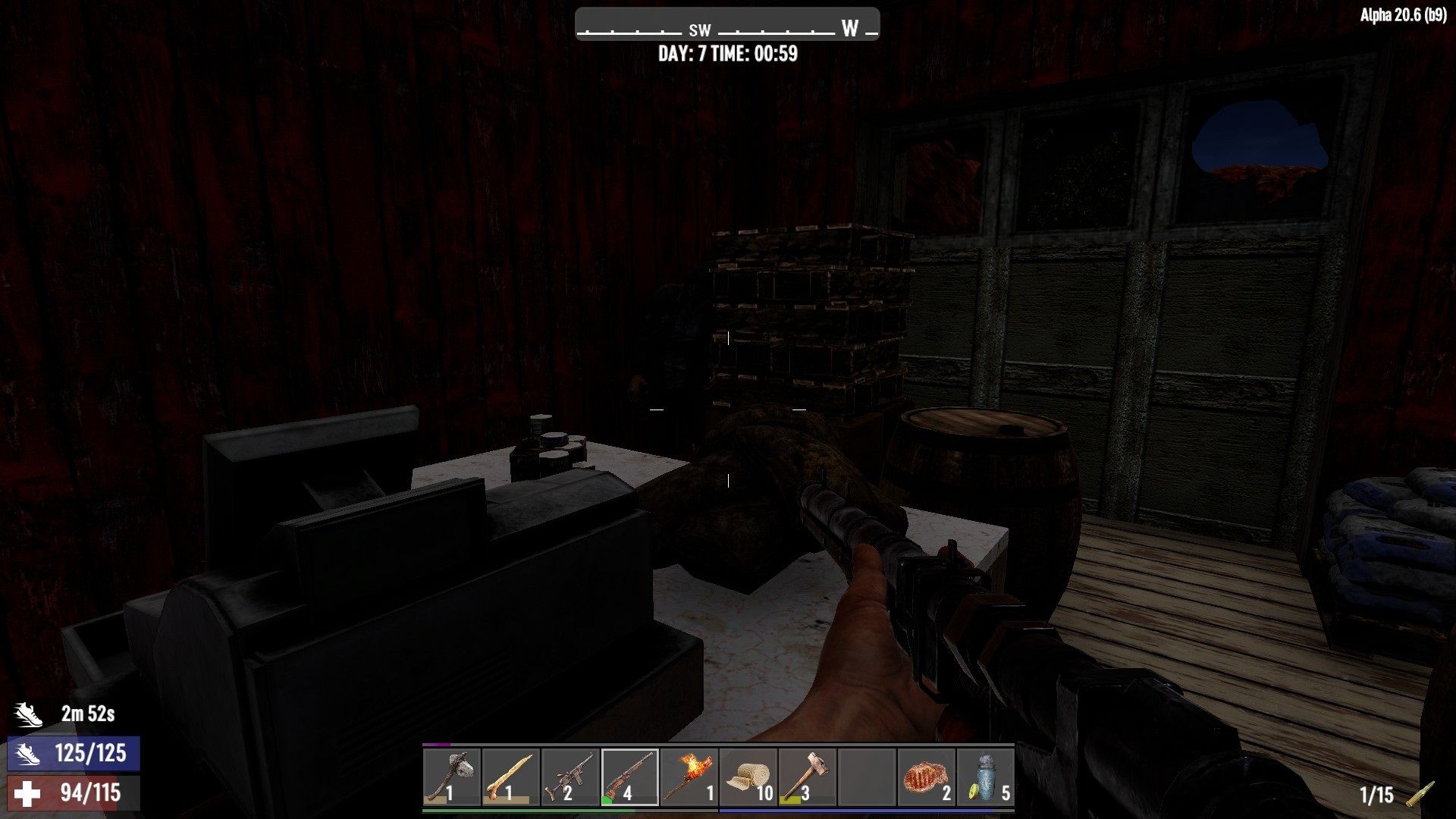 The first place was mostly a wash. It had some canned goods but mostly trash on the floor. This was not what I was hoping for. The good news I could always return and mine some of the stacks of iron or cement if I wanted to. This town ended up having a lot of those kinds of resources. I would not have mined finding such things if I was at a stage of needing them. 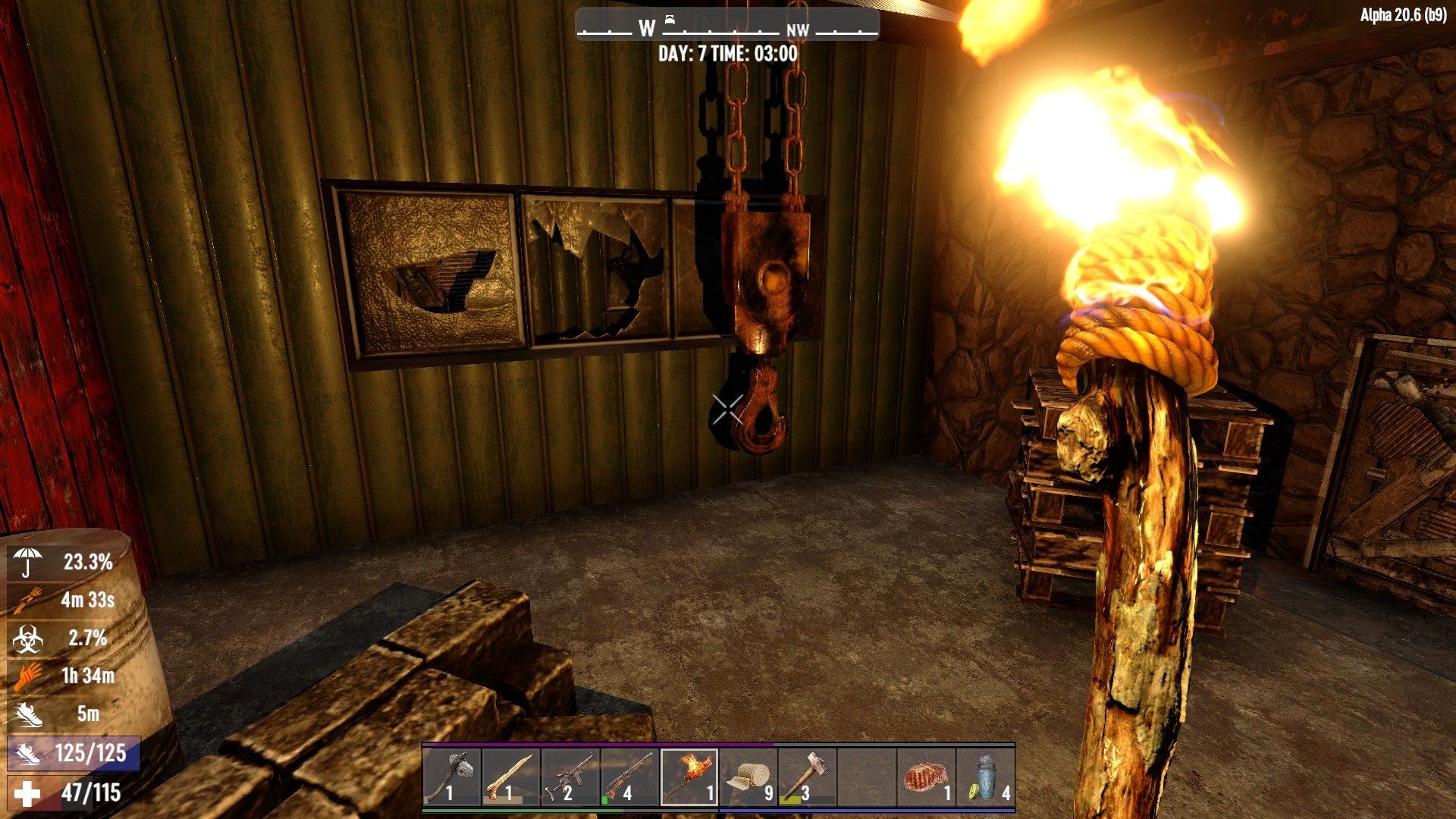 I must say during the nighttime with all the added extra details that have been added into 7 Days To Die it felt like I was running around in a horror movie. Many of the industrial shops I broke into sent chills down my spine. It did not help when I would run into the occasional zombie that wanted to kill me.

I was at least somewhat hopeful that it would be daytime soon. I kept going from place to place breaking in and filling my bags with whatever I could find. In terms of lootable, this place was kind of barren for what I was hoping to find.

I did find a gait safe even to crack open. Thankfully I did not need to sledgehammer it open. I had some lock picks me and I only broke one of them to open it. It was however a bit disappointing after opening it no guns inside despite it being a gun safe.

Along the way, I did at least find some ammo. This trip was also not a total waste as I did find a lot more food and water. Food was something I was out of at the base. I had also skinned any animals I could hunt in the area to further resolve that shortfall in supplies. 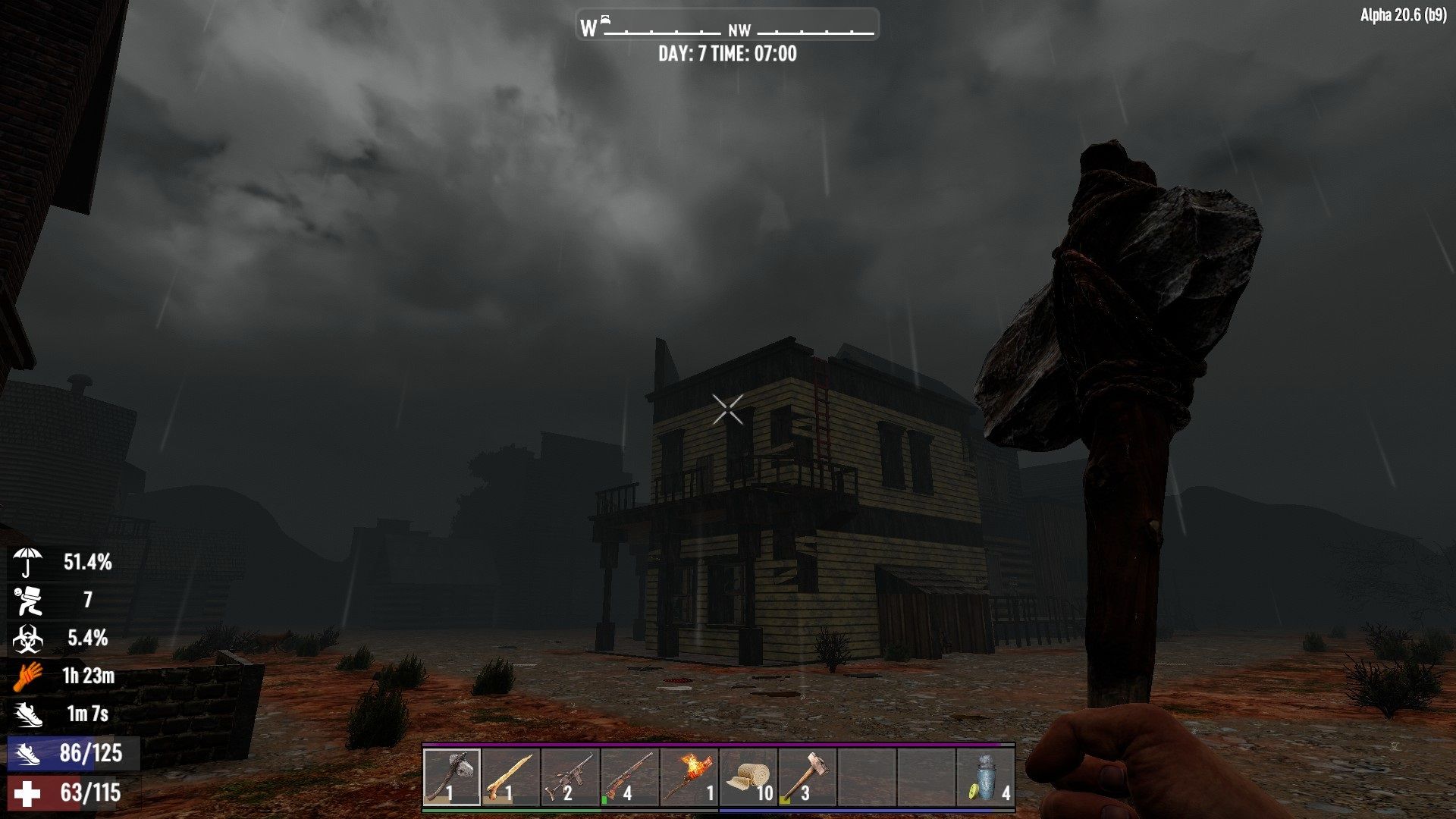 The daytime had in store for me a nasty storm. At this point, I was somewhat hindered by all the extra loot I was carrying. I had also suffered some damage from being ambushed by zombies. Getting wet and having to deal with a nasty storm was not something I was looking to happen at this point in the adventure.

While I was not able to fully clear out the town before my bags became filled. I had hit up or looked into the bulk of the buildings there. It was however time to make the slow adventure back to my base and start preparing as I was running out of time. 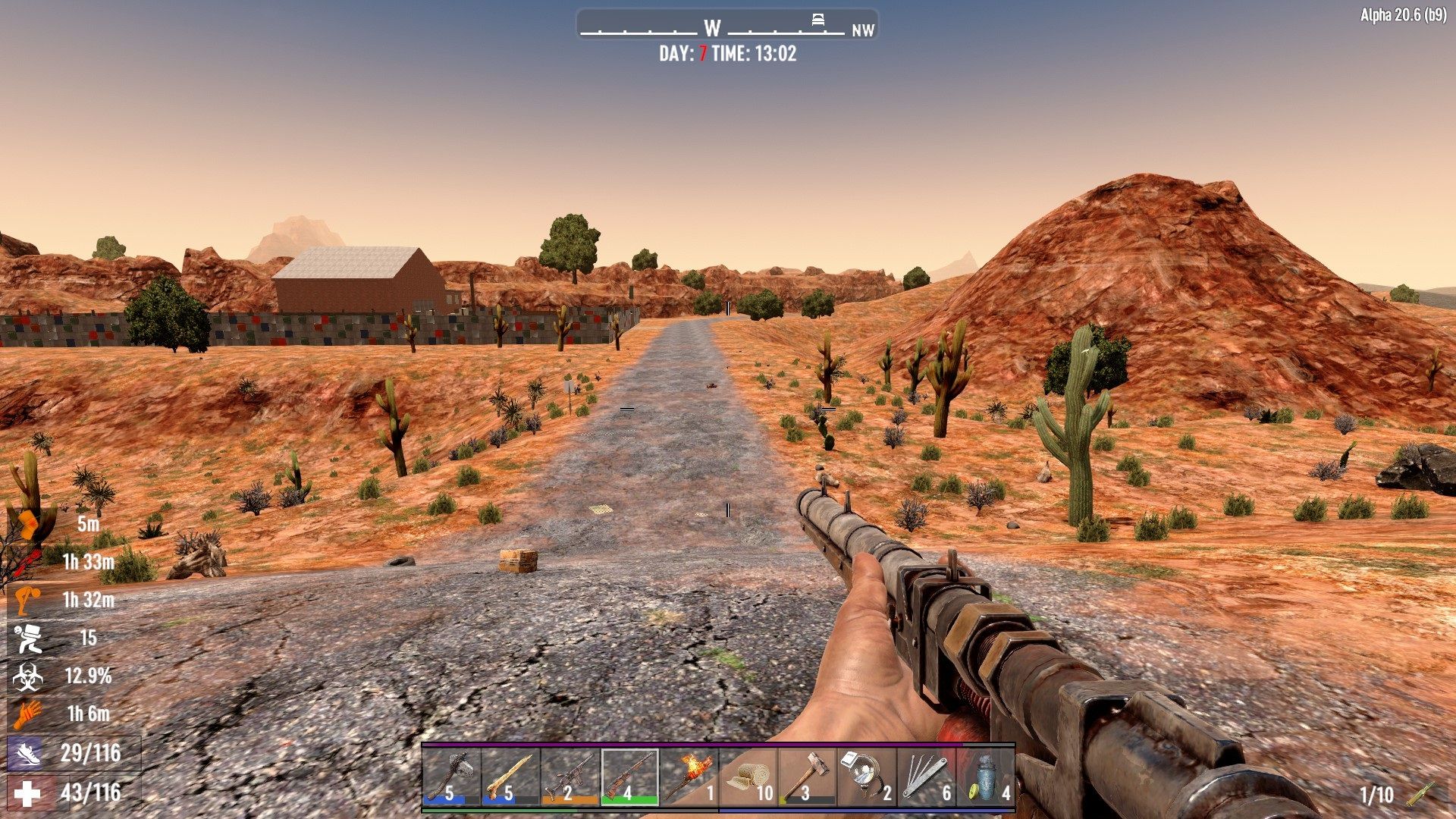 The good news is during my search of the town I did find some repair kits. I had already broken one of my guns a few days ago. My other one was about to break as well. With those repair kits, I was able to fix them fully and have them ready to go for the waves of zombies I would soon be facing.