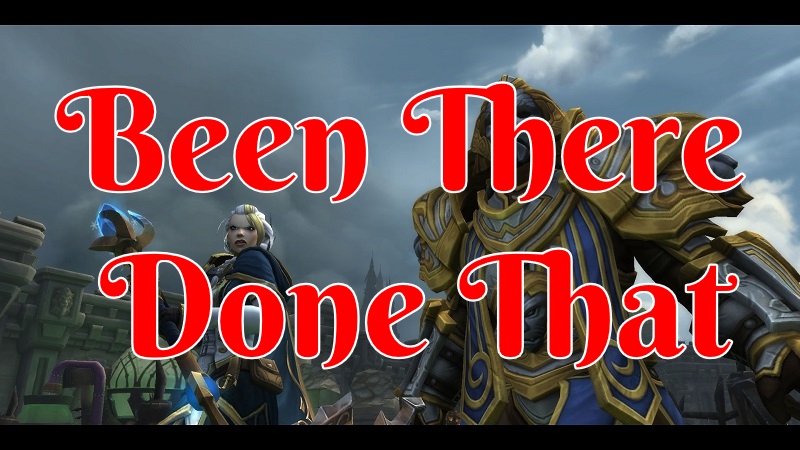 Been there done that. I’ve put a couple hours so far into the new expansion. So far my experience has been nothing special. A lot of old is new again mechanics they are reusing. Which was somewhat expected but still you hope in the long run this time around they will be better implemented. They still have their places that were amazing but you just expected by now so if they failed on that it be even worse. Then there just some strange areas and choices they made as well. 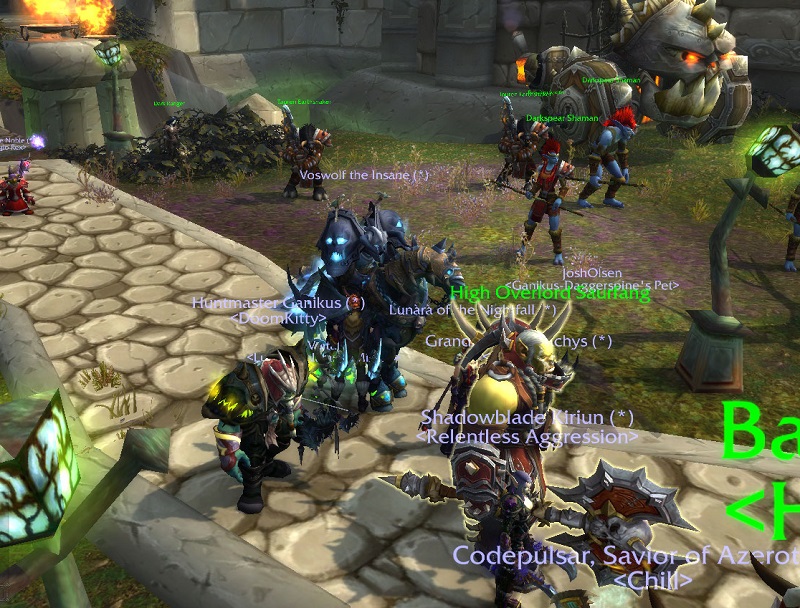 Like always on launch day there where some server issues. They have an interesting way of releasing the expansion by patching in the morning and then having everything unlock at a certain time. This allows players to already be in the game and lined up for some fun. I missed out on the Horde raiding some the alliance city’s while they waited around for things to kick off.

Their log in servers where hit hard with some issues occurring but that was expected even more so when I tried to log in at 6:10 a little later then I was hoping. Most of the issues appear later that night during the off hours on the server I play in. Around midnight or so I finally just gave up due to lag and crashing issues. This seems rather common to everyone around me.

Other than that they seem really keen on providing a good starting experience as far as players connecting and being able to play. 24 hours later there were no issues that I’ve found and I’m rather pleased about them fixing issues rather quickly. Some issues are just always expected on launch day. I more than understand that.

Introduction To Battle For Azeroth 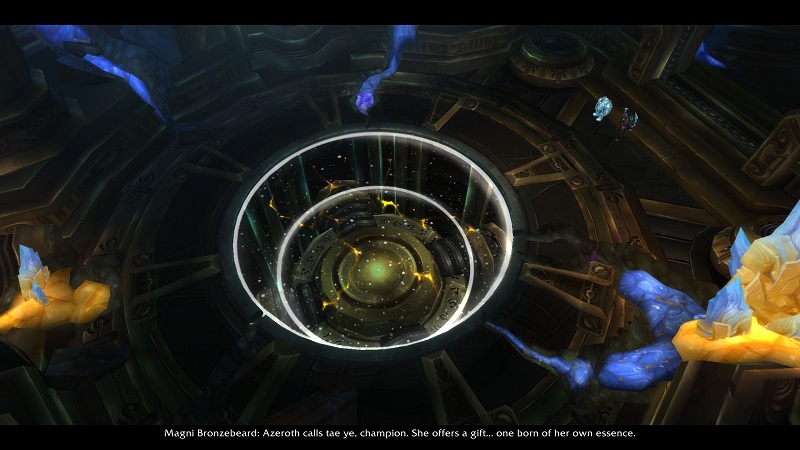 As always the cutscenes and missions that lead to the new areas were amazing like they are always. Blizzard has always done these really well. While certain parts of the cutscenes felt like they needed a tad more polishing due to glitches in animations. Other factors for that could be in play so I can’t really ding them on that. It went well into getting you to hype up to conquer some new lands.

For me the most important thing for these starting missions was the queue time was almost instant. How long will that keep up I have no idea? In the past, there have been some issues but their systems this time around seem to really be in working order at least when I did these. 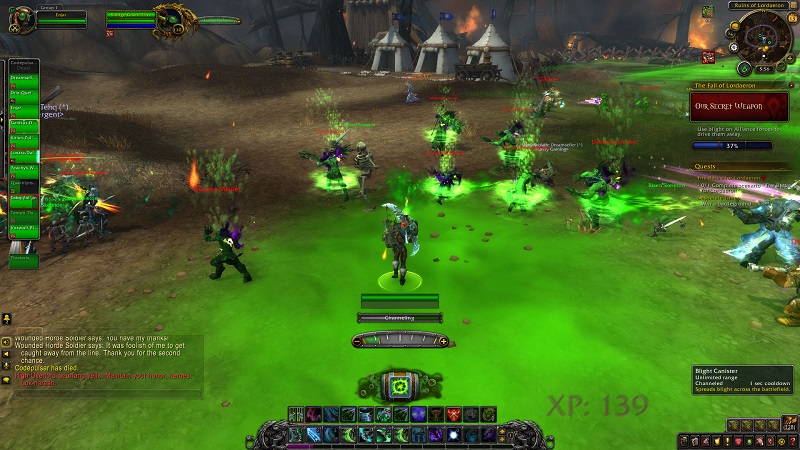 You get placed in some random large groups as you make your progression towards the main event that lands you in the new area. For me, at least these seem to be the more fun parts of the game. You are always having to do something a little different then you are used to and overall it’s just a random pick up group where there is no one screaming in chat “that not how you do that did you watch YouTube videos on this.”

Chitchat seem rather nonexistent during these and I could tell I was not only one trying to get used to playing the game again. There were some funny moments of people rushing in and getting killed. People not getting heals and some just getting lost. I rather enjoy that sort of thing. It was not overly serious and these scenarios are also a cake walk even in today’s standards of gaming so it’s not like you can fail these. 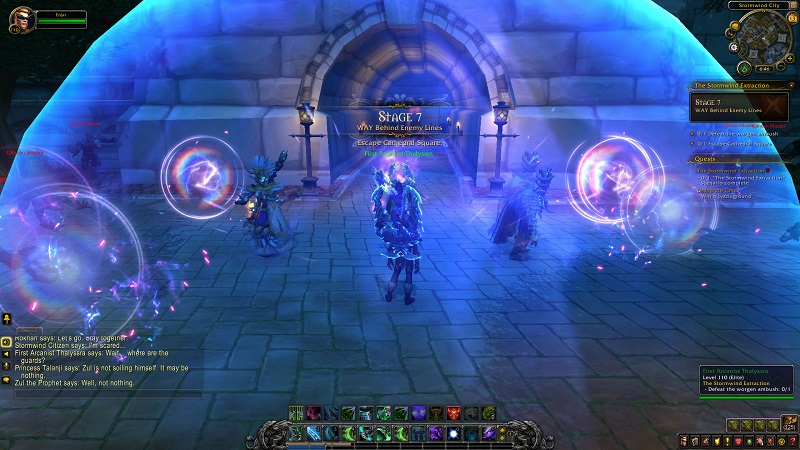 One of the more fun parts for me was running in an instance of Stormwind City with a bunch of NPCs complete different stages. I really loved the premises of being at this location and it finally ending everything and leading me into the new lands. Between a mix of having to clear and kill or play stealth and hide. It offered some fun for those who enjoyed either of this kind of play styles.

Overall if the entire game was like this I could see people just buying it just for that. Port it over to VR with some major tweaking and you have yourself an interactive movie of shorts that someone could pick up and pause when they needed to. 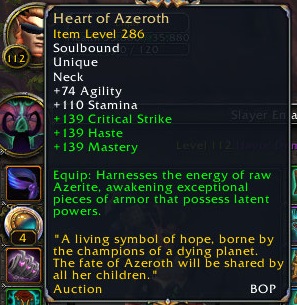 Am I super thrilled again needing to collect Artifact Power yet again for some item that won’t carry over into whatever the next expansion is? Not really even more so since it just seems a little odd this time around. Granted I knew this going into things since it was a selling point for them bringing up about this necklace. This way of going about things just feels worn out by now.

We have already done the whole get earn Artifact Power for doing quests, looting items out of chests for it and earning it form raiding and other activities. I just hope this time around we are not having to near billion of it at the end to keep leveling things up. For a game like WoW that just seems to not fit in. If this is just there a way of keeping players around for a month after month I feel it will fail rather hard this time. It only worked for so long last time before people really stop caring to except for the one percent. 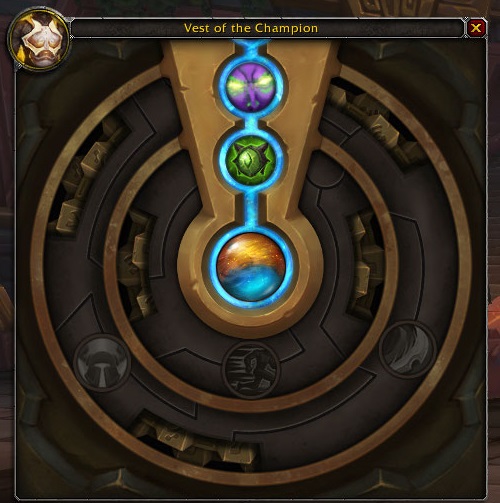 I was presented with three pieces of armor to choose one as well. Since I did not do any research beforehand I was not too thrilled to already have a choice that I knew very little about. They did not even go into great detail about them unless I missed it.

I ended up just going for the chest piece. Some other choices where replacing gear I’m still rather fond of. So far the upgrades for it have not been that thrilling and rather easy to acquire. This at least for me feels like a starting introduction into this system. This has been tied in with the Heart of Azeroth at least for first few upgrades for it. I ended up going with an upgrade for my eye beam, some healing when damage is taken, and level upgrade for the last one now.

I do like this idea of gear having upgrades you get to pick to make things a little more special to your play style. Since I like to do a lot of solo farming or small group things I can see myself going with certain options over what a raider might want. I’m still in very early stages of this so I have no idea if this will be something I truly hate and feels pointless or if this system will be great. 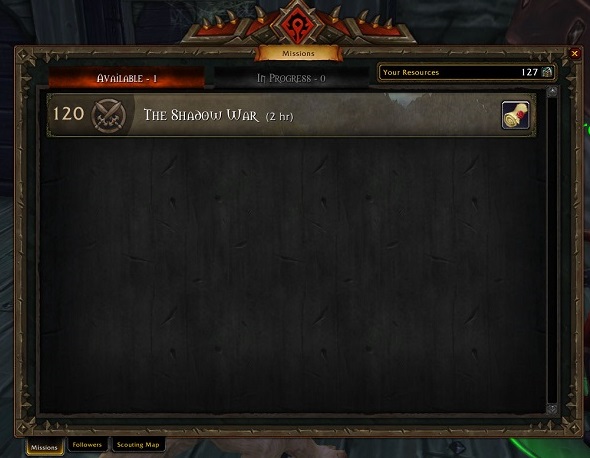 Blizzard how many expansion now have we had this darn garrison thing? No, I won’t be rushing online every 2 hours to keep these missions going. No, I won’t be stopping everything I’m doing to run back to the NPC to find out my results for some minor rewards. No, I won’t spend hours grinding for resources to send my army of guys out on another mission.

Please stop putting this thing in. I stop caring too much about it in Legion and at least then you made it feel special with it being in a class hall. Before that, it was used in our own little city we got to build up. This time around so far it’s on a darn boat. Now yes I did not go through the next step and I’m sure I’m missing something really big here. I just felt like saying NO for the moment. I have not even checked in on how that 2-hour mission went.

I’m sure somehow this will be more thrilling then I was expecting as it seems to be a key element they focused this expansion around. I’m just annoyed it’s here yet again. This was a triple-A priced more is expected at that price point. 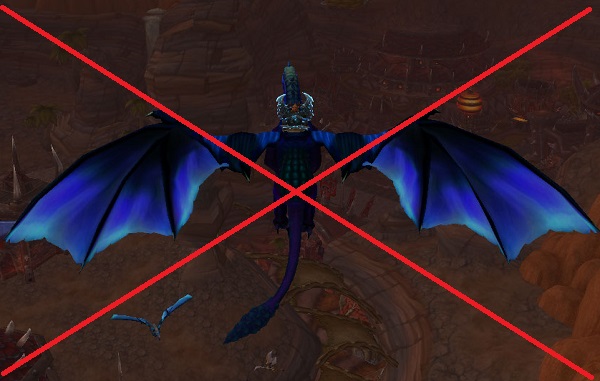 Was this expected—yes. Don’t tell me at some point we will go on some epic over grinding for weeks thing to be able to fly? I really don’t know as I never paid much attention to all the promo stuff leading up to this. So far I’ve really wanted flying. They have put in a shocking amount of flying points to carry you around at least. So I’m wondering how this will play out.

Did Someone Play Ark Survival Evolved? 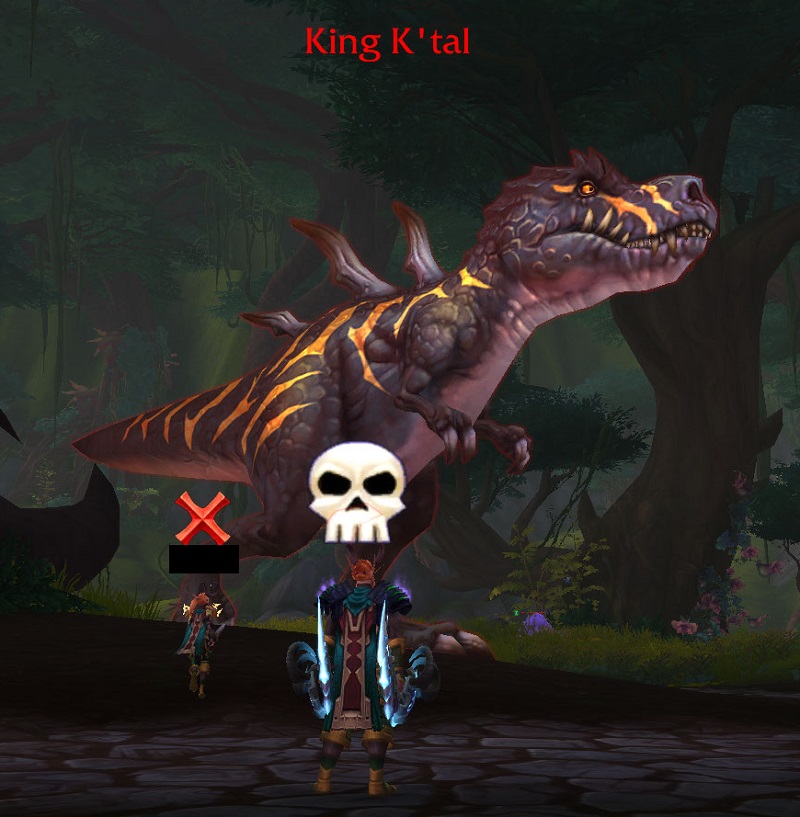 Perhaps it is me or does it seem like the developers have been playing some kind of dinosaur game these past few years? At least there has not been any kind of taming activity where I’m sitting around for 10 hours waiting on a progression timer to finish. No, that is not an invitation to do that to your player base either! 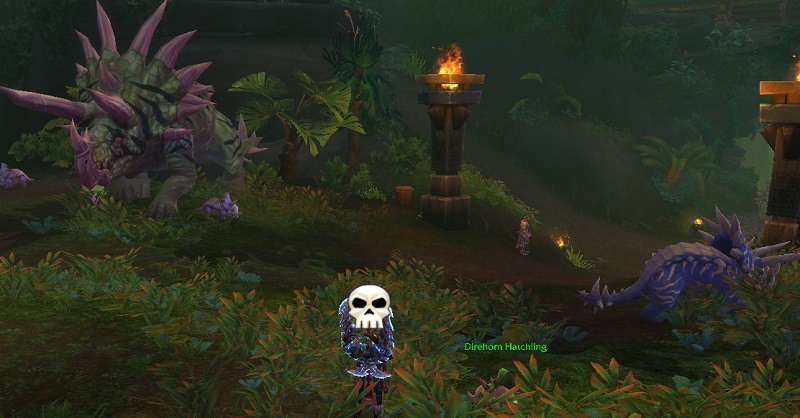 Just a few weeks ago I swear I was taming a Triceratops. Yes, you can call them “direhorn” all you want. I know what they really are. Expect with that added bit your design team went with for the tail. Just don’t think you will get away telling me otherwise. I’ve seen a few dinosaurs now in this zone. 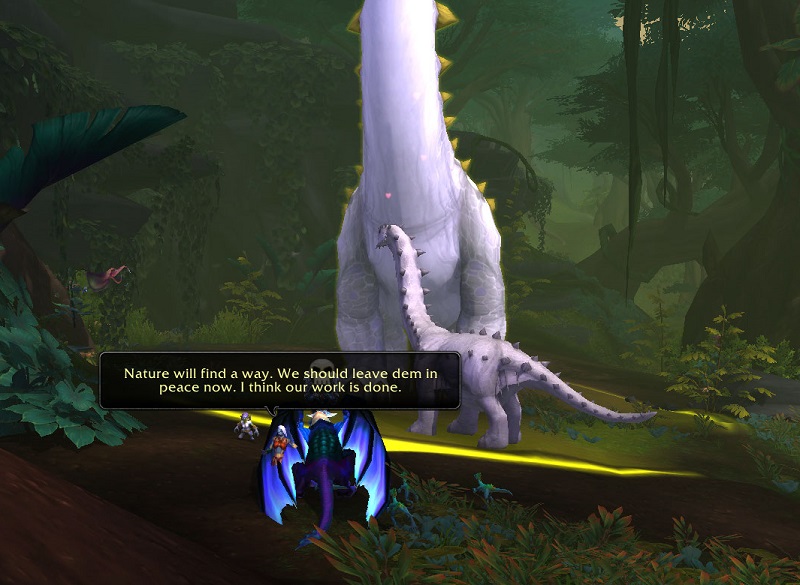 Oh look I helped the breeding process of some Brontosaurs. No wait I mean they are 100% Maka’fon’s yes that what they are—wink. 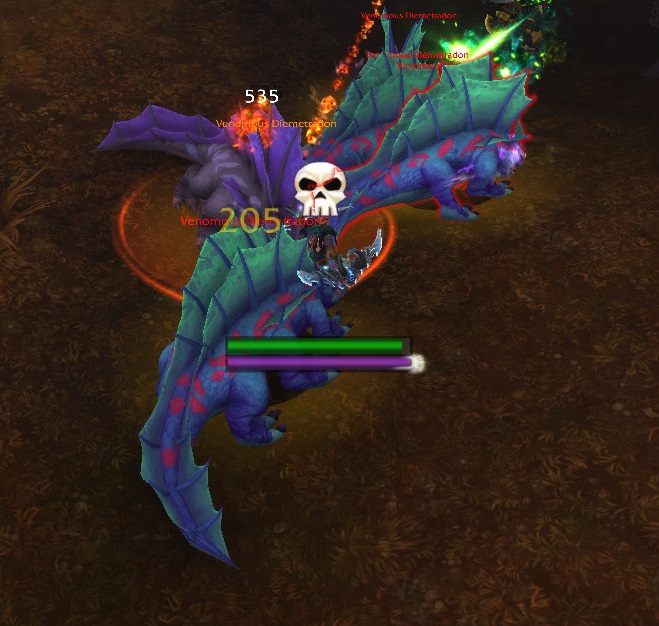 Seems we have some Dimetrodon’s as well. Darn, it blizzard! I mean since they have that extra fin on the back yes they are now called –Diemetradon. Wait a moment is that not the same thing? Interesting!

Now to be fair to the lore of the game. I know they have had some similar things in the past. I’m just poking some fun here at this part. I can’t be the only player either noticing the similarities. 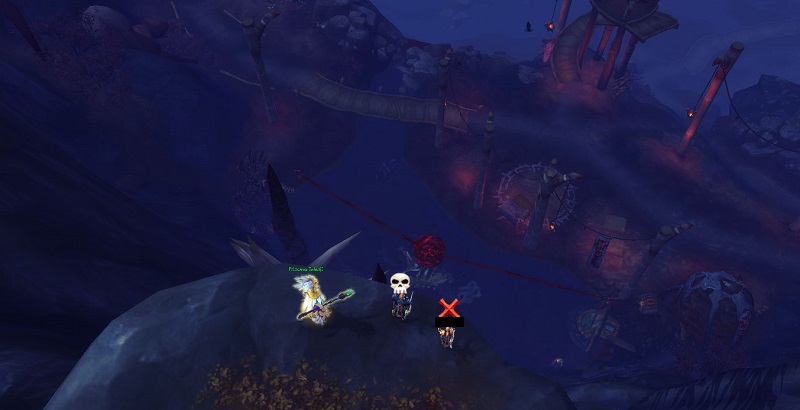 I’ve had some fun running around this world again. With how old this game is getting and the lack of that feeling of “omg new” I’m wondering how much more they have in the gas tank. Will they be trying a WoW II at some point? I mean that’s what they have done for all their other games. This one is just starting to feel really dated and done before.

How long will I play this? I’m not quite sure. Yes, I had a lot of fun on my first two nights so far. I’ve only made it to level 112 as we are taking it rather Causley. I might even level up an alt past my main when everyone can’t be around.

Still far too early to judge too hard on this expansion yet. Most crafting supplies seem to sell for next to nothing till people work out things or more is added. Since I enjoy gathering, crafting, and trading I’ve not enjoyed this part yet. I know this takes some time to develop and I won’t really know till later on since I’m still focused on leveling to 120 for the moment.

If things don’t work out I guess I can just go play Ark again.

Screenshots were taken and content written by @enjar. Screenshots are from a game called World of Warcraft.