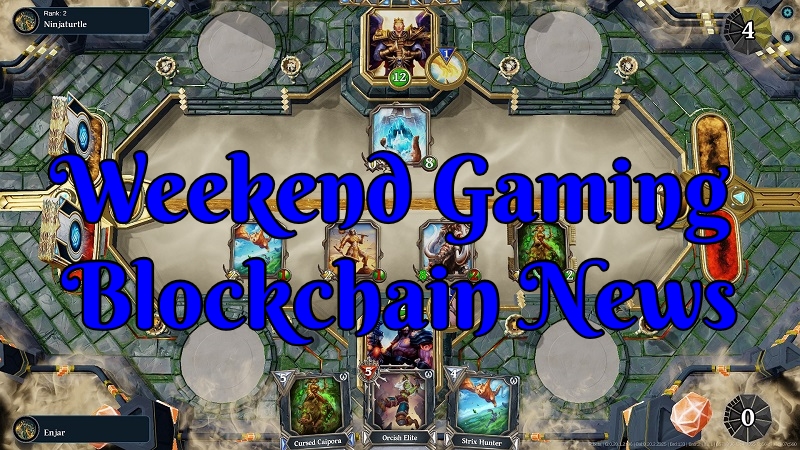 I’m Enjar the time-traveling cat from Messier 64 bringing you the news with what is going on in the Steem universe and beyond in cryptocurrency for gaming. In this action-packed weekend, ready your wallets and pray your transactions are not delayed in a black hole. 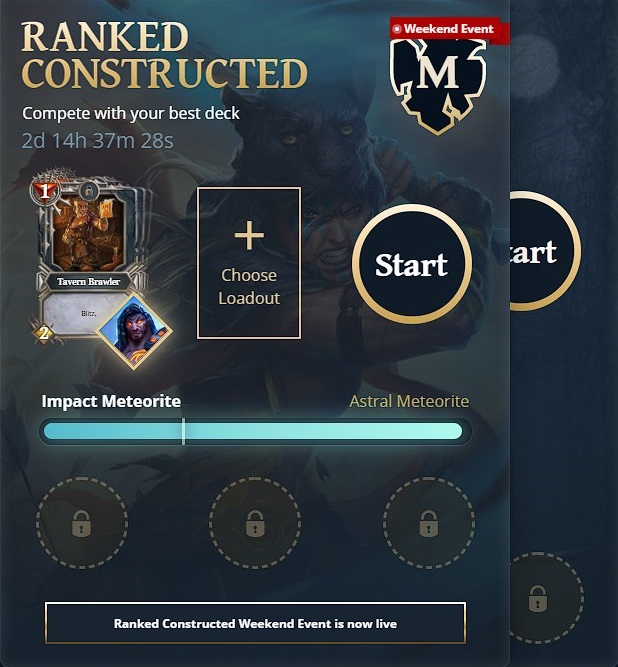 Every weekend Gods Unchained hosts a tournament that takes into account the player's amount of wins over the weekend along with their constructed ranking. Players if they quality than can win core packs. Further detail can be found from the Gods Unchained blog

On top of those rewards for anyone that has a Steem account, they can now sign up for OCD’s weekend tournament that has 300 Steem and one rare genesis chest up for grabs.

The Gods Unchained developers have taken to Reddit for a weekly developmental update on how things are going for the game. Most of their efforts over the past couple of weeks have been fixing bugs and providing smoother user experience. There have been some hints about new upcoming content but nothing concrete on what exactly that will be or when.

Game’s website
Some players logging into Forgotten Artifacts a dungeon crawler rpg this weekend might feel like they got nerfed. There also some news for those fancy holders of founder stones. There also been some rumors I don’t believe are correct.

With some bug fixes, Forgotten Artifacts has also implemented a new rarity requirement system to go into dungeons with their latest patch. While at first, you would think that be great. It’s not stopping under-geared individuals from going into the hardest dungeons as you can still do that with uncommon items equipped. Instead, you can now only enter the lowest adventure stone dungeon with up to rare items. Leaving the most powerful weapons no longer permitted in the lower dungeons. I have a feeling some high-level players might feel a bit nerfed as they can no longer have such an easy run in them.

For those who are Foundation stone holders. Don’t forget upcoming on January the 19th will be the statue carving of holder names. That seems to be an interesting gift for those that got early into the game. More details about that can be found here in their post. The asset itself is seeing some action of selling for over $100 on Enjinx over the past couple of days of trading.

There are also some rumors floating around that the practice dungeon was made easier for the lower geared. After entering and attempting a couple of runs with my uncommon katana all I can tell you is I got owned I tell you-- owned! It is still one of the lowest completed dungeons currently playable in the game. 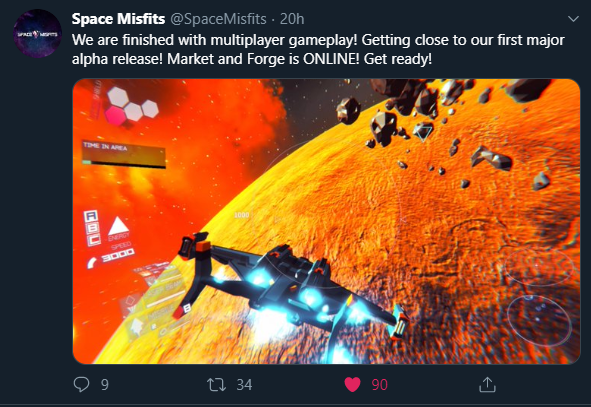 Twitter
Space Misfits has some exciting news that they are getting close to the first alpha release on Twitter. No exact dates have been given as of yet. Alpha is something you will need to buy into by spending enough in their shop.

The game itself is a space sandbox MMO. It will be interesting to see what kind of assets you will be able to buy and perhaps earn from by holding. Not much else is know myself but it’s on my radiator to check out in the following months once they are a bit closer to more people getting to play.

The EOS blockchain is still being EOS. Sorry gamers, if you were over your CPU limit chances, are you still prevented from transacting over the error. Markets really pump just about anything over nothing. I hope some are not trying to hold their breath it could be a while longer. Will we have to wait and see if EOSIO 2.0 will get anything useful done all the fun games leave for elsewhere. 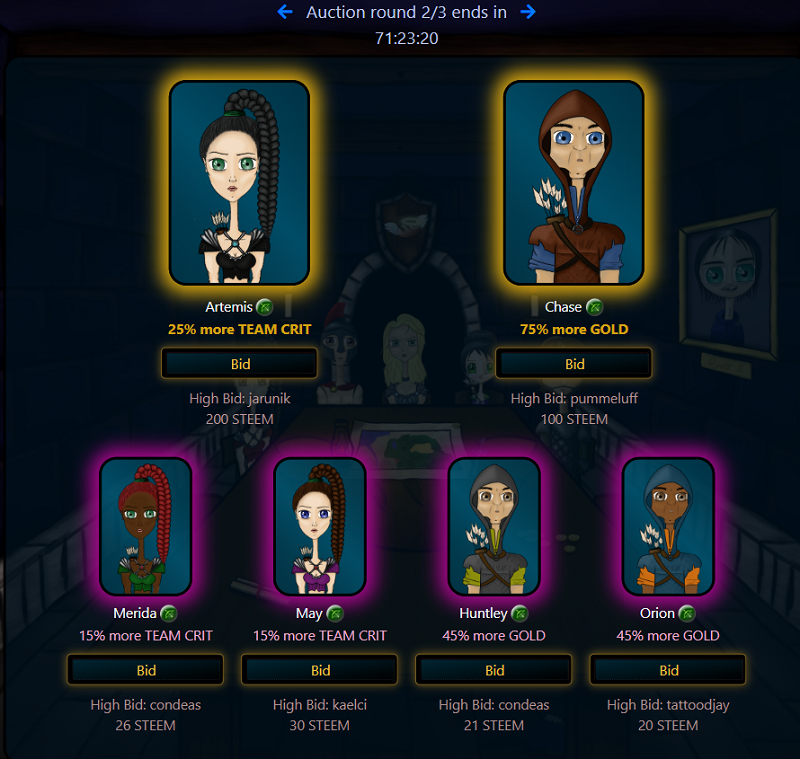 Holybread Website
With Holy Bread set to launch on the 27th they have been doing some pre-auction and are now on round two of three. Bidding has started to ramp up some as players who were trying to last-second bid missed out on the first round.

We can see players have already played down some heavy bids exceeding the first round. While others are still hoping to snipe something for a decent deal last minute by just placing some low ball biddings for now.

Will FOMA drive massive bidding during the last round after this one ends in a couple of days? Will people still fight it out seconds before the bidding closes? Perhaps some will continue to overwhelm bidders by placing down larger bids in an attempt to throw them off their game before the final minutes.

Make sure to pre-sign up if you have not already for a free gift while it lasts till the game release you can do so using my referral link.

Splinterlands website
Splinterlands a collective card game shows no signs of slowing down anytime soon. They have concluded the other day another season. There will be some policy changes comping up that might affect some players. On top of that, they are having massive tournaments over the weekend.

For those that don’t play Splinterlands every couple of weeks, they have a new season. Where player ranking gets reset based on how well they performed and they get some seasons to end reward cards. This is usually where they do any balance as well if needed which was seen in prior weeks.

They also appear to be cracking down on what they are considering abuse of their API. Not a lot of clarity was given in exactly what the means as they have not fully rolled anything out yet. This has left some players concerned if their use of trading and API requests could be considered abuse.

With League of Champions, The Wealthy Gambit and many other tournaments spring up over this weekend (check times here ). There is over $1k in DEC up for grabs. These tournaments do have an entry fee with many being 2k DEC costing around 9.782 Steem.

With some of the first items being gear and weapons! It sounds like those players are gearing up for a bit of a battle over there. May their new NFT serve them well in their RPG.

With non-fungible tokens now on the Steem blockchain, this is huge news. This is expected to usher in a new era of gaming and make the Steem blockchain more competitive with other blockchains that have already deployed similar systems. Bringing in even truer ownership of items by the players who hold them.

This is Enjar the time-traveling cat sighing off. Have a great weekend gaming may the next blockchain game you find bring mounds of coins and a tale to tell for years to come.

Screenshots were taken and content was written by @Enjar. The cover image is from Gods Unchained