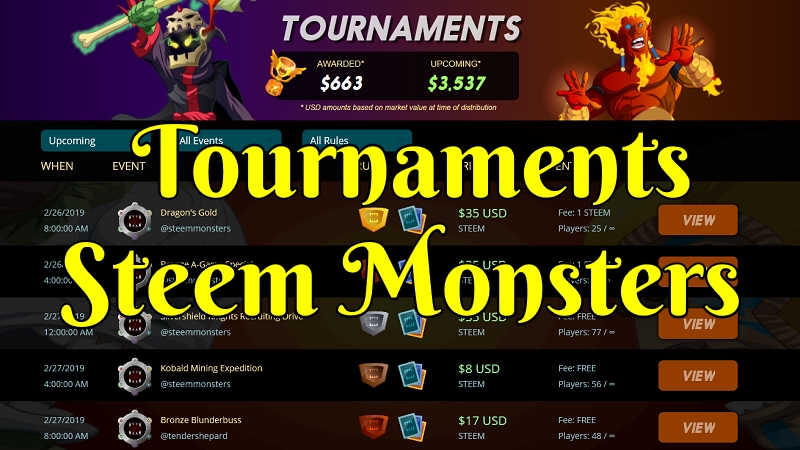 Being played on the Steem blockchain, “automatic” tournaments for the digital collectible card game Splinterlands is now available. Where players can enter free or paid to enter tournaments to battle it out with other players.

While this concept was oringianly thought to be under the set and forget it model. It has changed into players being able to sign up on their site and then being required to show up around 15 mins early to check in. They then get a match with other players and have to select what cards they wish to battle it out with for each match.

Many collectible card games (ccg) out there have had their player bases such as Elder Scrolls Legends dreaming of tournaments with cash or equivalent prizes to be earned. As gamers from around the world have seen the Esports side of ccg expand over the years from Hearthstone and Qwent follow purist of the age-old classic Magic The Gathering to name two.

Will blockchain technology help Splinterlands reign supreme and bring in a new era of Esports to Steem? It’s a little too early to tell. According to their own website in just a couple of days, they have already awarded hundreds of dollars’ worth of Steem and prizes with thousands projected to be won in its first full month of this features release.

Deeper Dive In How It Works

Players can simply click the tournaments tab to be greeted with a long list of upcoming matches. While a majority of these matches are being funded from sales by the company themselves. It is possible in the near future for companies and event organizers to run their own. Some have already done so. 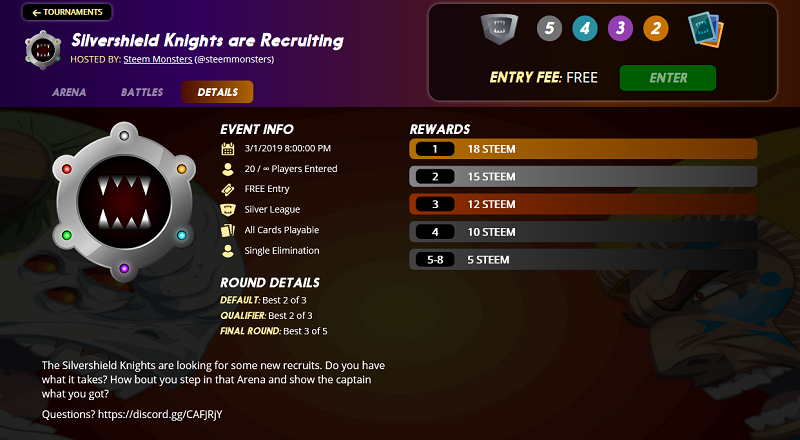 Before sign up, players are then greeted with an information page. Where they can see the prize breakdown whether it be in Steem or other kinds of rewards.

Along with showing what level of cards are permitted. With different caps from Novice for low-level cards all the way up to Champion with no cap. If you have higher level cards then the cap that is perfectly fine they will just adjust as they would be under the normal ladder.

You are also given further information as what types of eliminations are for each round. Along with a place for event host to place their logo, leaving a brief description and contact information such as discord.

Throughout the tournament players will get notifications while logged into the site letting them know when their next match is and any other needed information. They also have a wide range of options to help set reminders in different calendar programs from Apple to Outlook.

Once the tournament starts and the players have a check-in they then get placed and battle it out in a number of different rounds. The particular one I was into the early rounds you needed to win two of three matches vs the same player to advice otherwise you would be eliminated. As you can see I was defeated! 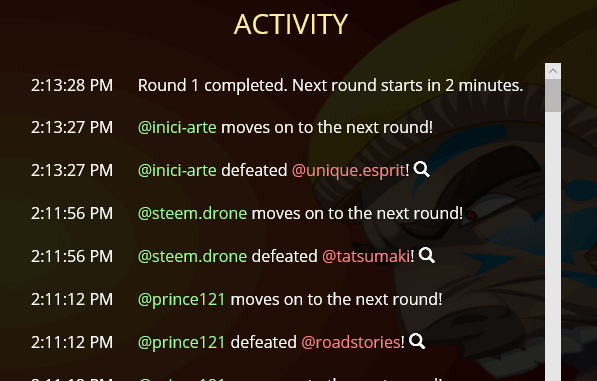 There is an activity log for anyone to just check in and see how things are running.

Matches themselves are otherwise played out as normal. Where each one has a set of rules, mana cap and a list of splinters to choose from. Where the player makes the best team they can around what cards they have and what they expect their opponent to field. 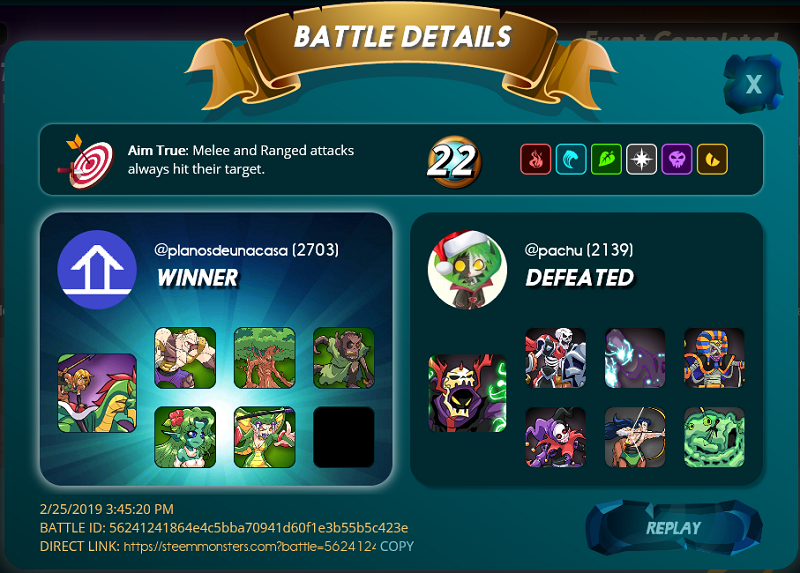 Since this is all being played out on the blockchain players can go back and watch any match they wish to. Such as the final four matches in the Ark tournament. With this being the final match and a winner is declared. 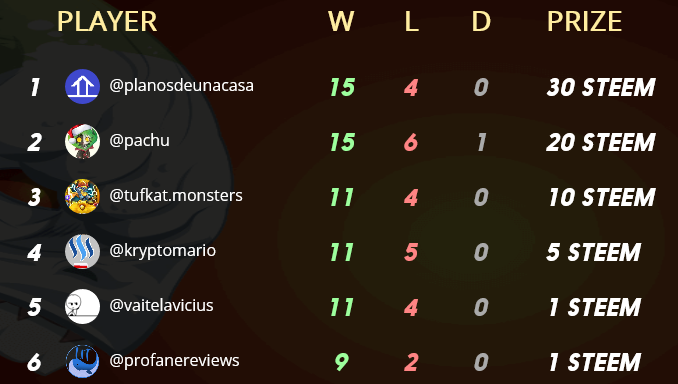 Prizes such as Steem, SBD, and Booster Packs are collected beforehand and held by Splinterlands so they can be awarded afterward without any issue or delay. Other prizes outside of that scope may require further getting into contact with the event host. 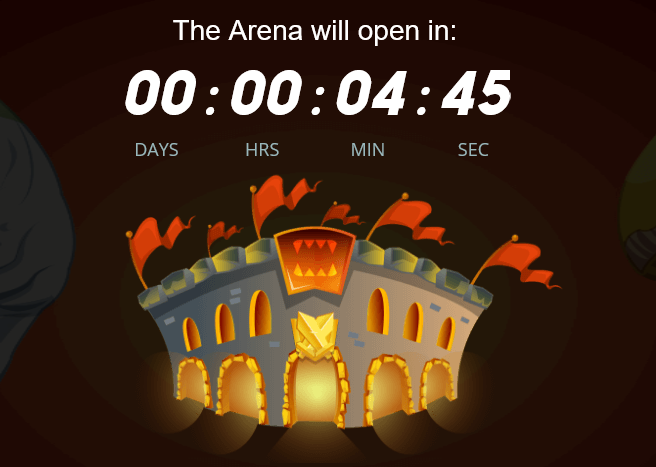 While I know this is not exactly what many players had in mind as they wanted a set and forget model. It is at least a step forward for bringing Tournaments and the possible future of Esports to the cryptocurrency world. There are many CCG games out there that will never get anything close to what this system brings. Let alone it is doing so in a fraction of the time more traditional events would take that end up being entire weekend(s) events.

It is best to set aside a couple of hours in case you go all the way. There is a 15-minute check-in period. Along with two-minute wait before each round with some of these going to eight rounds or more. Finally with each match taking a few mins giving players to watch the results, make a new team, and battle it out again three to five times each round. Each round is expected to be 15 minutes or so.

I do not see myself doing something like this daily as I’m just not the target demographic for something like this. For myself I see it more as a weekend thing where I may enter some of the higher rewarded tournaments. It would really be great to start to see live streaming and announcers creating content of some of the bigger events down the road.

I really like how you don’t need to max out deck to enter into a few of these daily once and still have a chance to win based on game knowledge and theorycrafting. With many of them being free at least for now. Making this a low barrier to enter activity on the lower end for many players. With scalability options for those with higher end decks and a bigger budget to spend on the higher end.

Screenshots were taken and content written by @enjar. Screenshots are from a game called Splinterlands My Affiliate link